Another installment in boy we have it good in the Sea to Sky corridor begins on Thursday. The bike park’s riding great. It’s literally deserted today like its been the past week. Dry weather and lots of hard work and shaping by the trail crew have resulted in fast, fast trails. 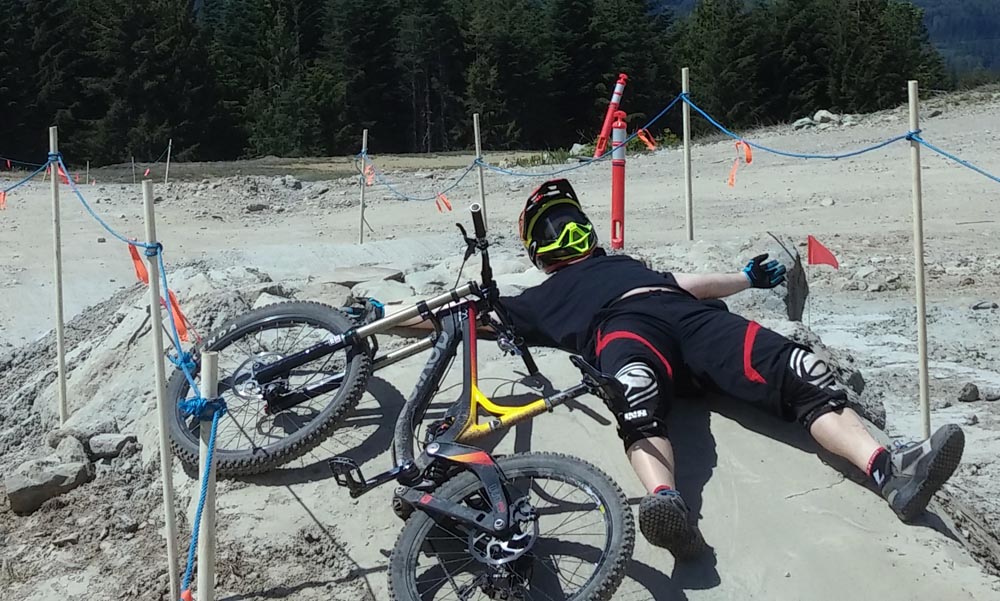 New GLC drop takeoff and landing. Note you can sneak thru on the left side but its still a small lift your wheel up

Hopefully this short little vid will help reduce the incidence of people walking up to the lip for inspection while the jumps are open and in play. Hopefully!

Friday we were off to Pemberton. Bugs were fierce and the climb up Nimby starting getting more and more moondust the higher we got so off we went down Backpains and then off to Creampuff. Lots of work benchcutting the Nimby climb is welcome. Discovery of the day is that Mt Currie Coffee Co now has gelato. Ahh yuppie heaven.

Up the Nimby Fifty climb where some nice benchcutting has taken place probably for the race.

Saturday brings weekend crowds but they spread out in the vast expanse of Whistler’s valley trail systems (get your trailmaps here). We started off by sampling Dan Raymond’s masterfully routed Rockwork – Korova – Wizard combo. After a nice shady stop at the Alpine Cafe we then pedalled up to Howler to end with some fast loose downhill.

We finished off the long weekend with some pedally trails in the Squampton area first starting with section 57. Seems so much more bang for the back to wind your way downhill through loam shots as opposed to the rather more fall-line of Cheshire Cat – but then I suppose it’s a classic first world problem; which cool trail do I take. Then off to experience the joys of the new rebuffed Wonderland. Steve’s old classic is awesome in the dry but gets a bit mudboggy in the wet. The new work makes it a changed trail; hats off to PoDo and DreamWizards for the work.

This entry was posted in 2014, Bike and tagged Pemberton, squamish, WBP, whistler. Bookmark the permalink.