Depressing lack of snow in B.C. makes for a stable snow pack and an opportunity to seek out new terrain in the BC. I had my eye on Atwell’s East Face for a while so when I spoke to Sky and he told me that he had a window of time to get after it, it took me all of a minute to set a meeting time, set goals and start the mission. We met in Vancouver on Wednesday evening. An hour later we were skinning up at the Elfin Lakes Parking lot at 10pm. A couple of hours later we were bedding down at the hut at 12noon with a early morning wakeup call pending.

The next day we were out the door early, leaving the hut @ 6am. Shortly before 10am we were at the bench approacing Atwell after dropping to Ring Creek then skiinning up towards the peak. The high pressure sure made travel easy and fast. Lots of tracks from skiers and snowshoers doing the Neve traverse but very few heading to Garibaldi, Atwell or Dalton Dome.

After a stiff climb on mostly snow with some not-too-technical ice, Sky and I were on Atwell peak at 1130am. We skinned the first bit of the bench to approx 2200m then switched to boots. The peak is about 2680m and we reached the top in brilliant blue windless heaven.

It was quite an unexpected pleasure to be sitting on what felt like the top of the world with time to ogle the views and wait for the snow to soften up a bit for our descent. We spend the time checking out future projects, admiring the tourists buzzing us in a little observation helicopter (see video at the end of this screed) and visualizing our turns down the 55 to 50 degree slope to come. We also looked at Siberian and Armenian Express – they need quite a bit of snow to be doable this year!

The ski down was exciting if uneventful – the way we like it. At a constant steep gradient it was fast moving in the first half. We ducked around a rib to the second half where icy slopes had me wishing for stiffer skis with better edge hold. From there it was more open turns down the bench to about 1950m then down fast rolling terrain to Ring Creek. With a total vertical from 2680m to 1300m it was a great way to spend a beautiful day. We were back at the hut at 3pm. A lazy bit of downtime spent drinking lots of water and eating meant that we left the hut @ 4.30pm and were back at the cars and out at 5:30pm. 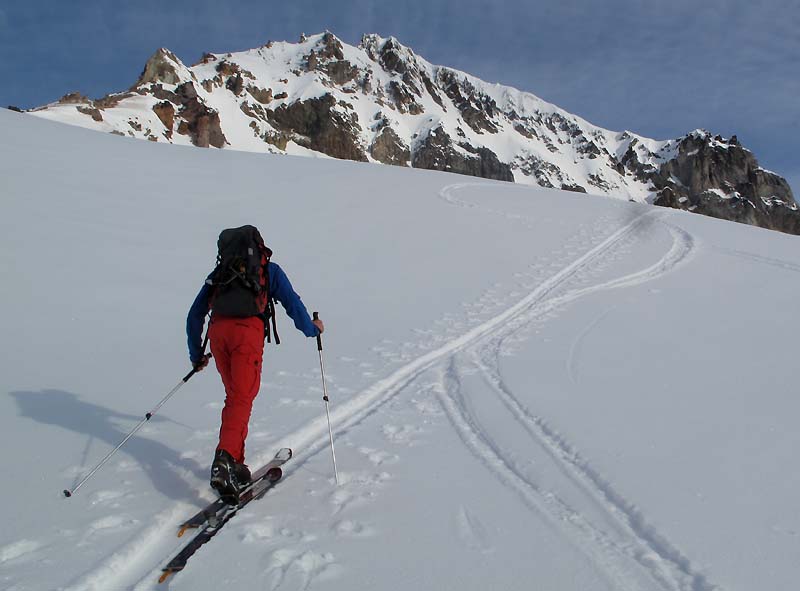 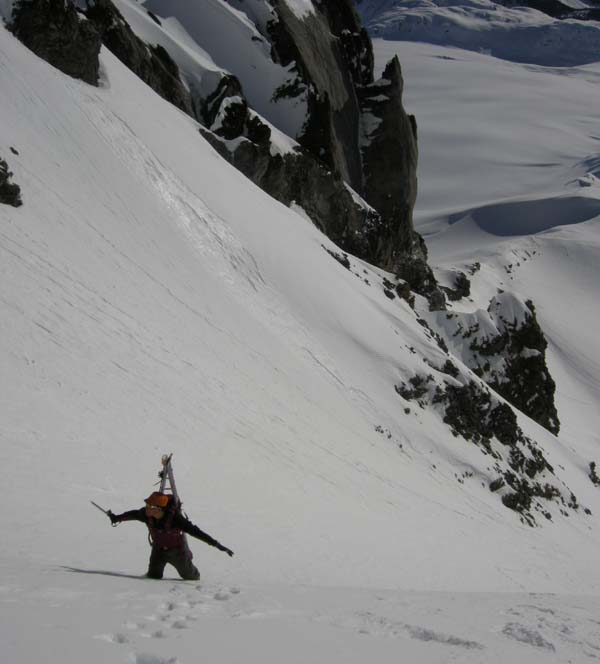 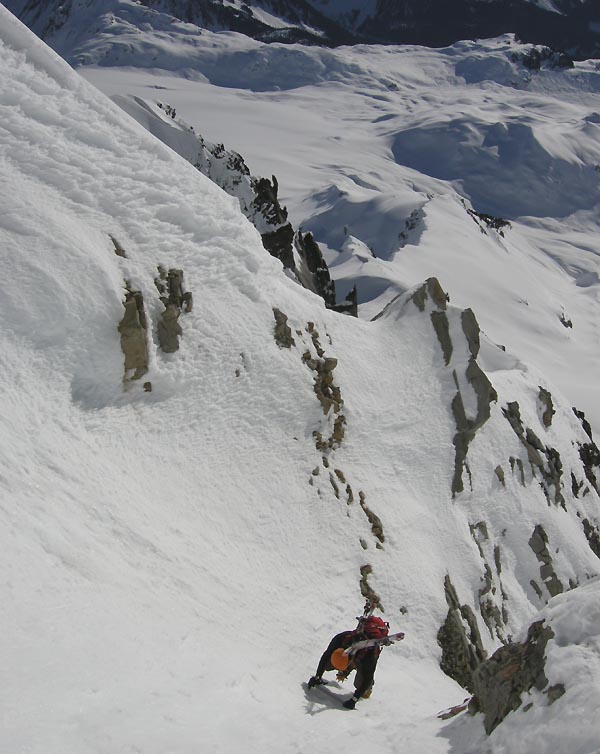 View of Robbie Reid. In the background is Slesse, Shuksan and Baker 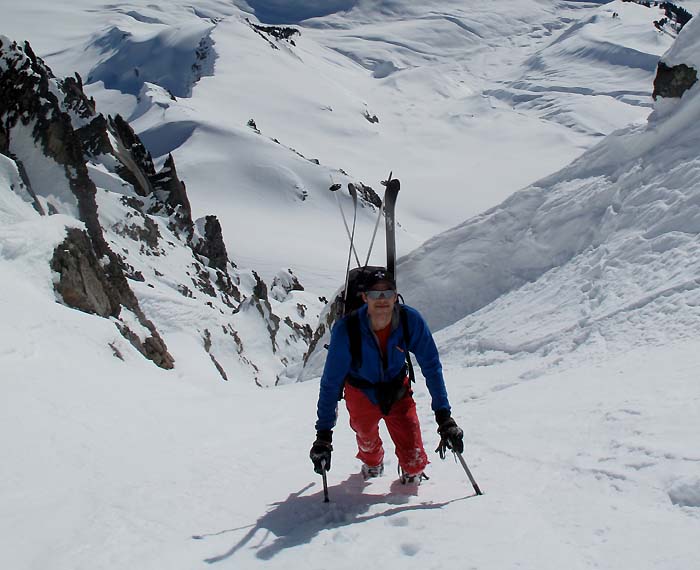 Sky at the mid-point. Later we would avoid the icy choke by skiing over the step to looker’s right and skiing off the hidden pitch 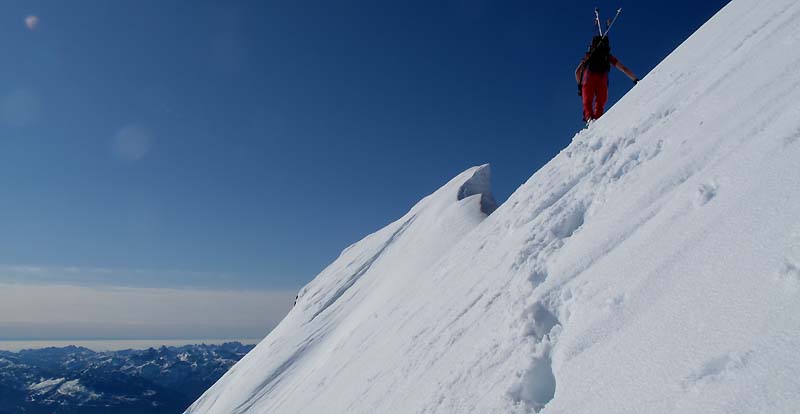 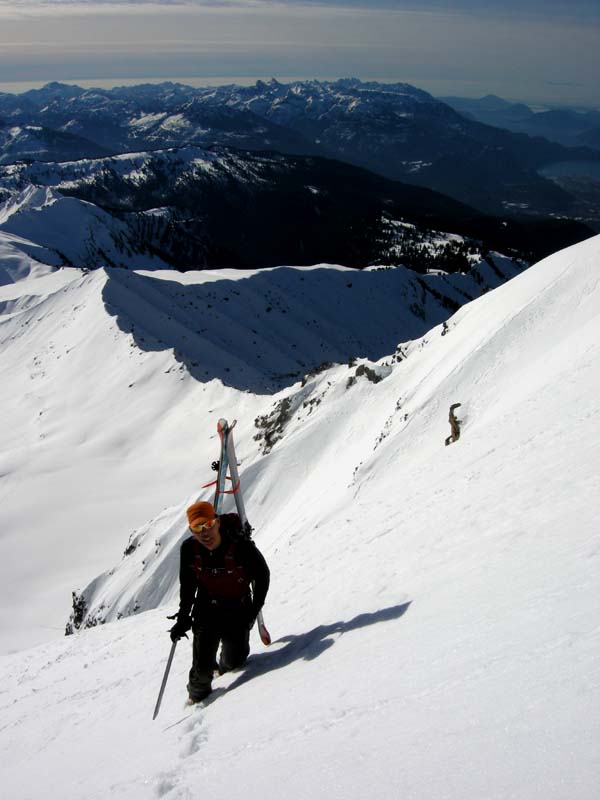 Lee on the “bench” before the summit. W face of Atwell is in the shade at background and shows this season‘s low snowpack 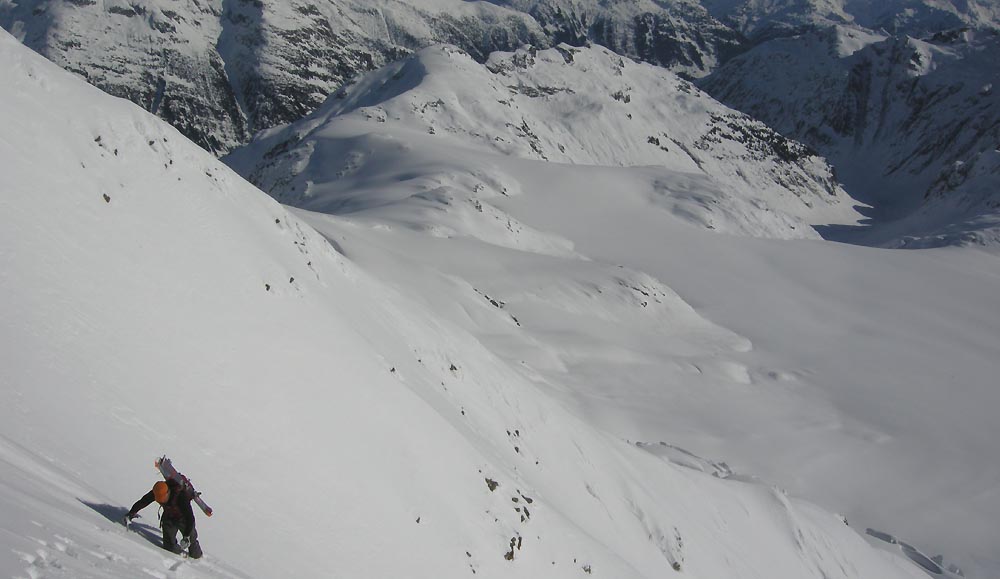 Lee approaching the summit ridge. Spire Couloirs are to the picture right 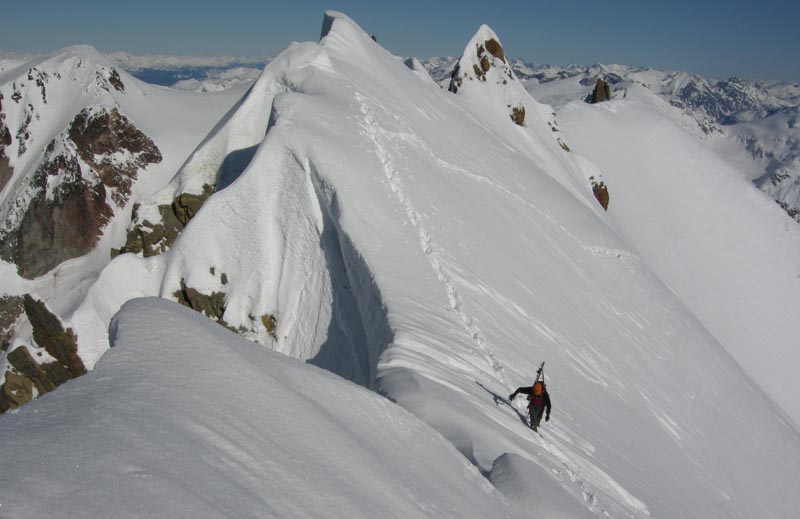 Summit ridge is heavily corniced. Siberian Express route to picture left does not have a lot of snow

Sky in his native environment

Sky in his native environment 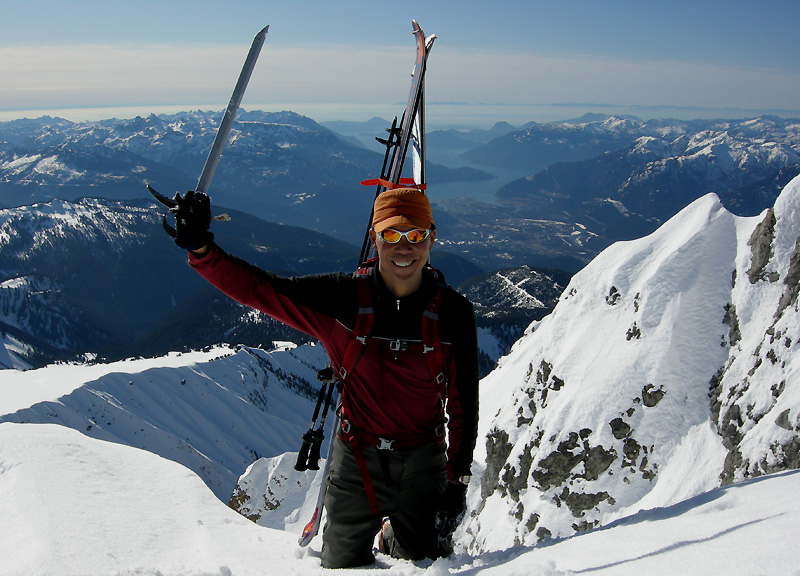 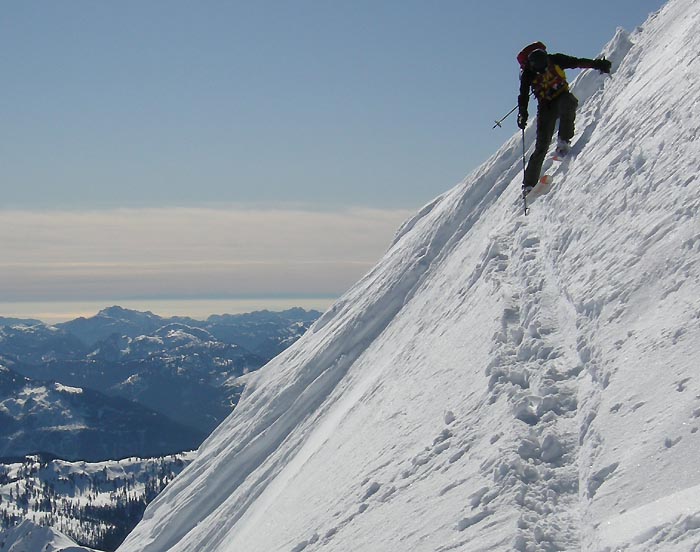 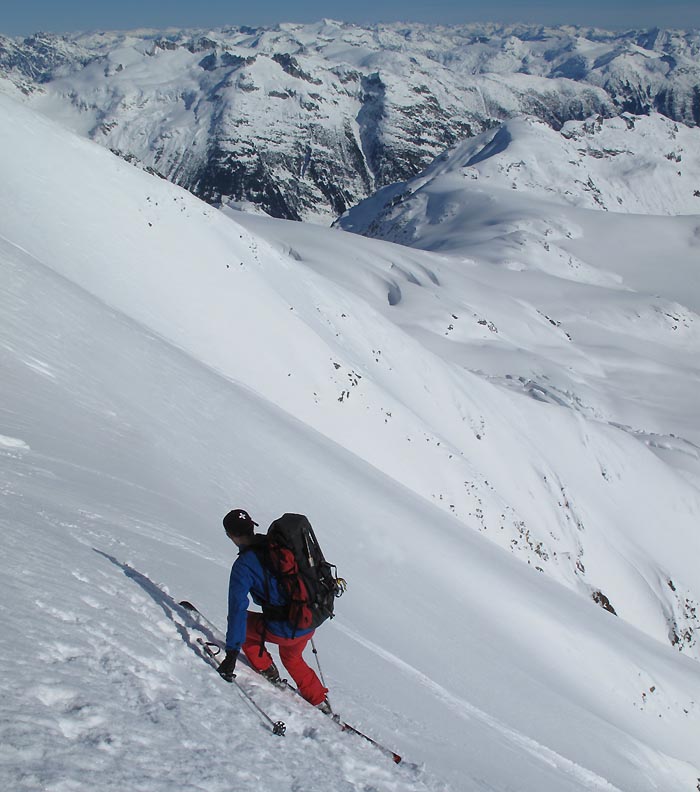 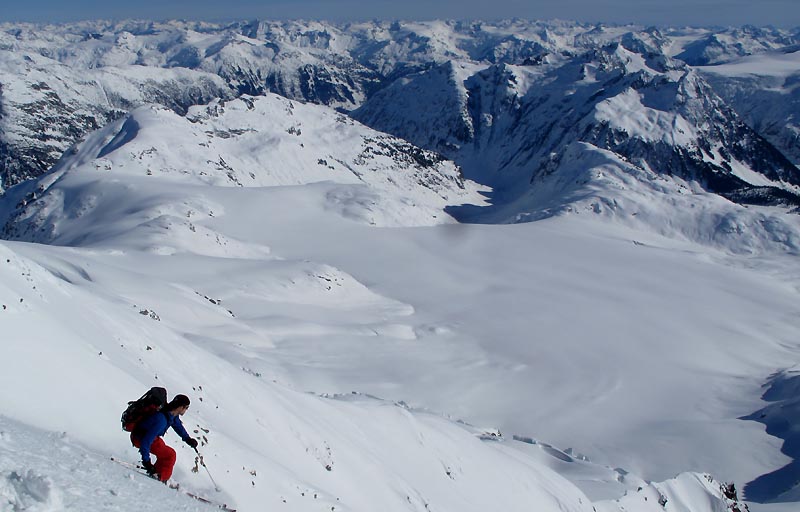 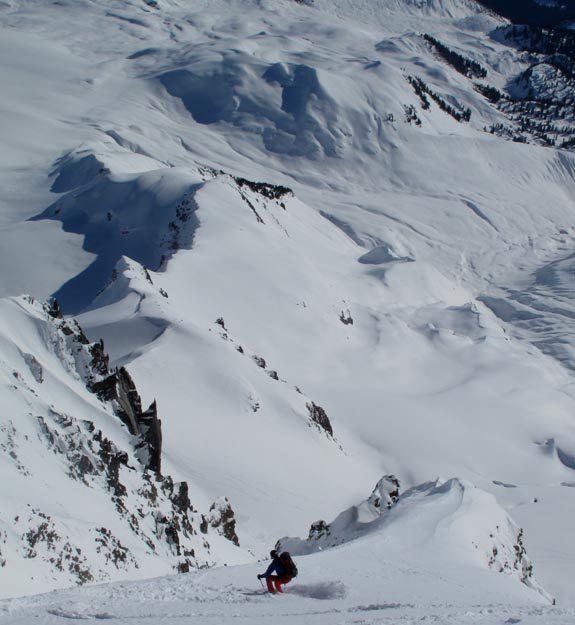 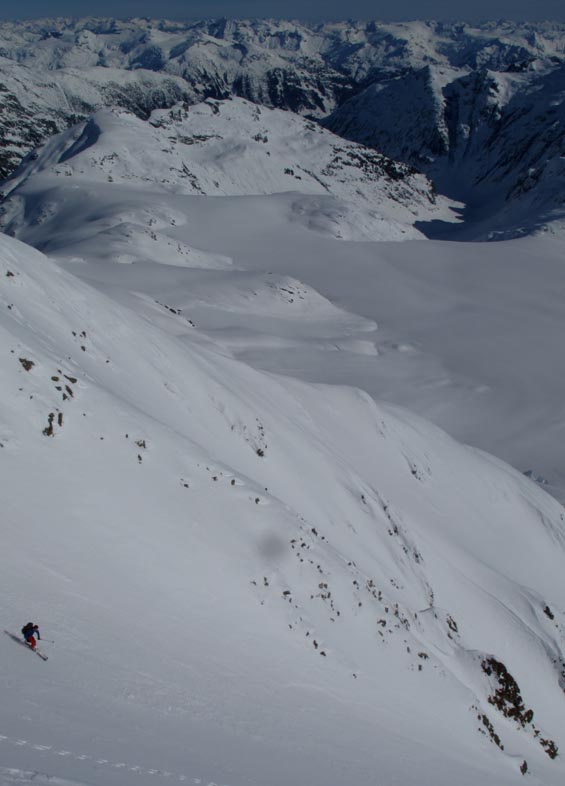 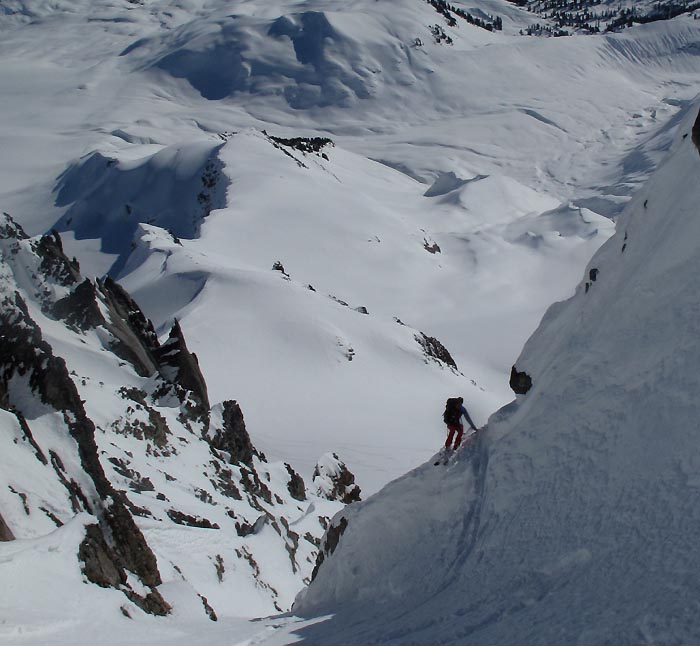 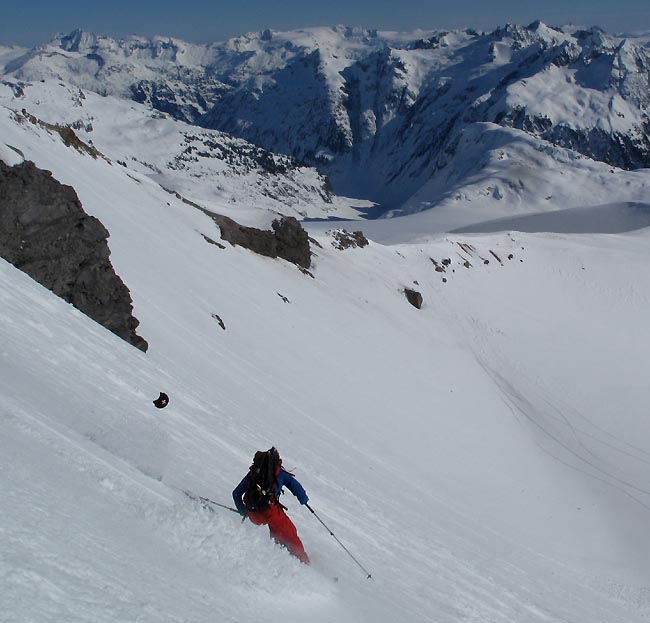 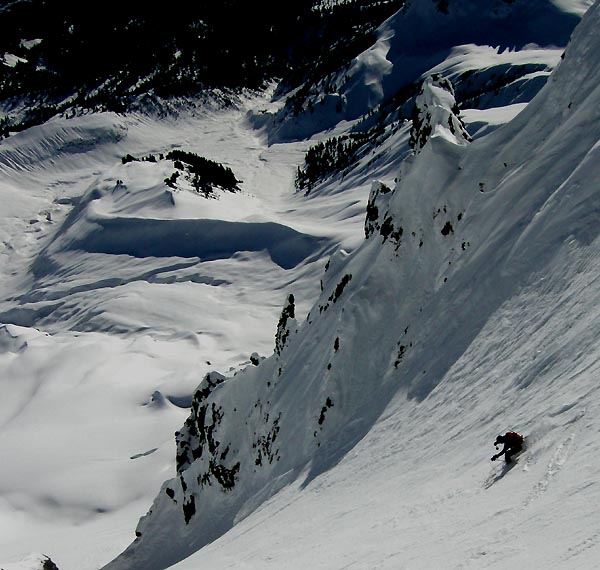 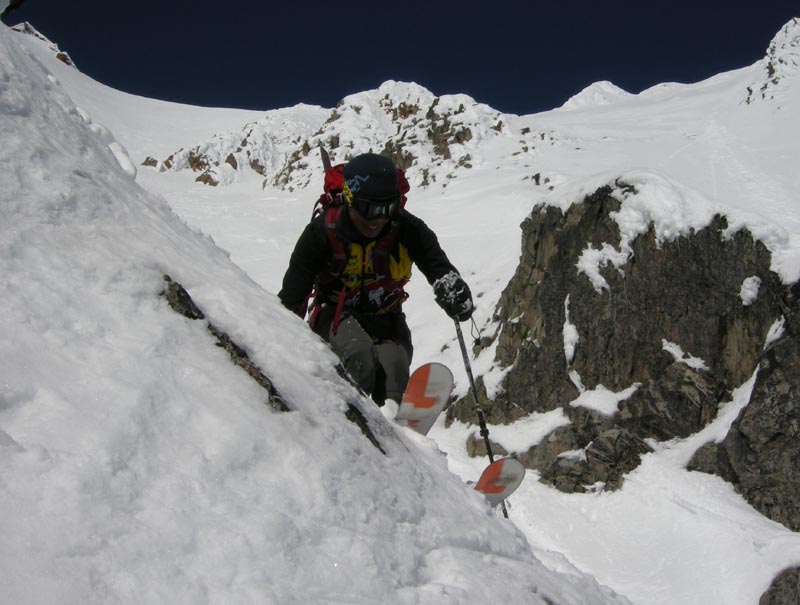 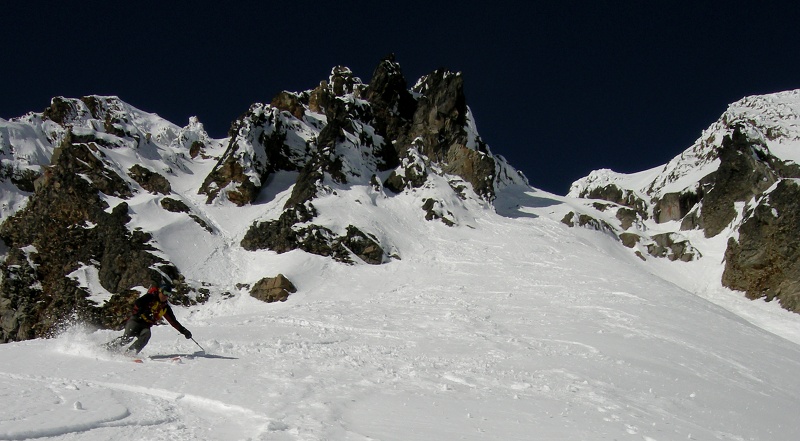 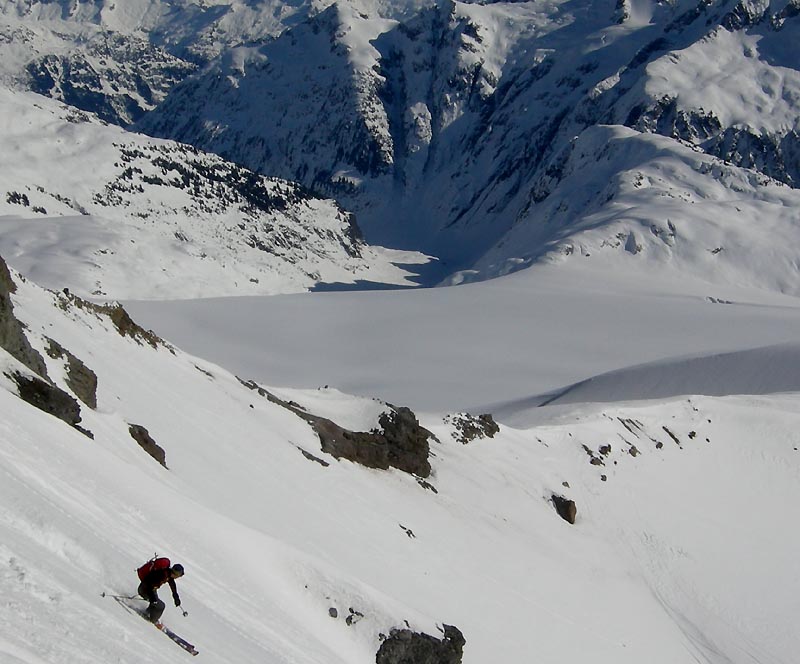 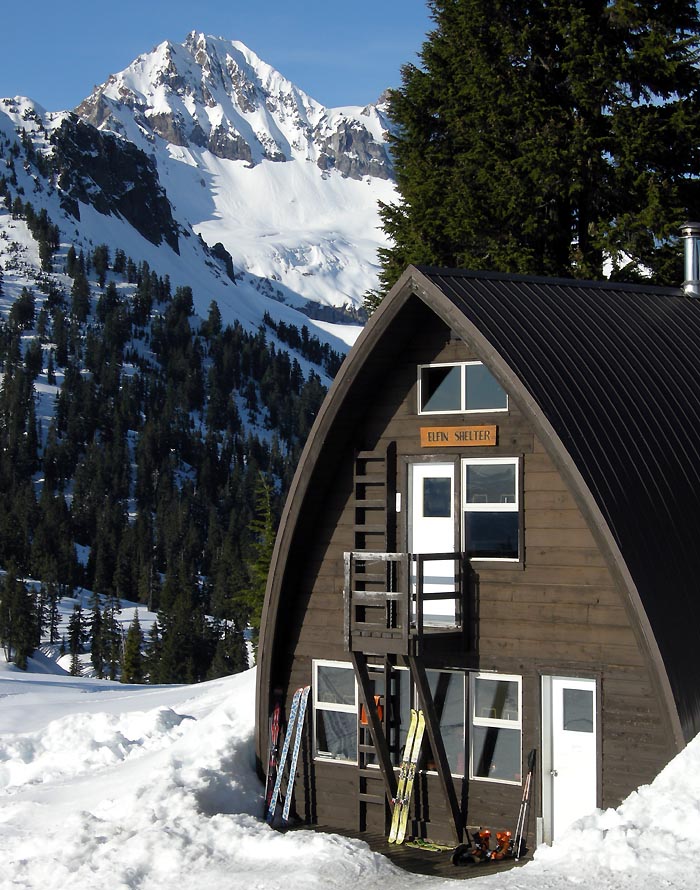 View of Atwell from Elfin hut 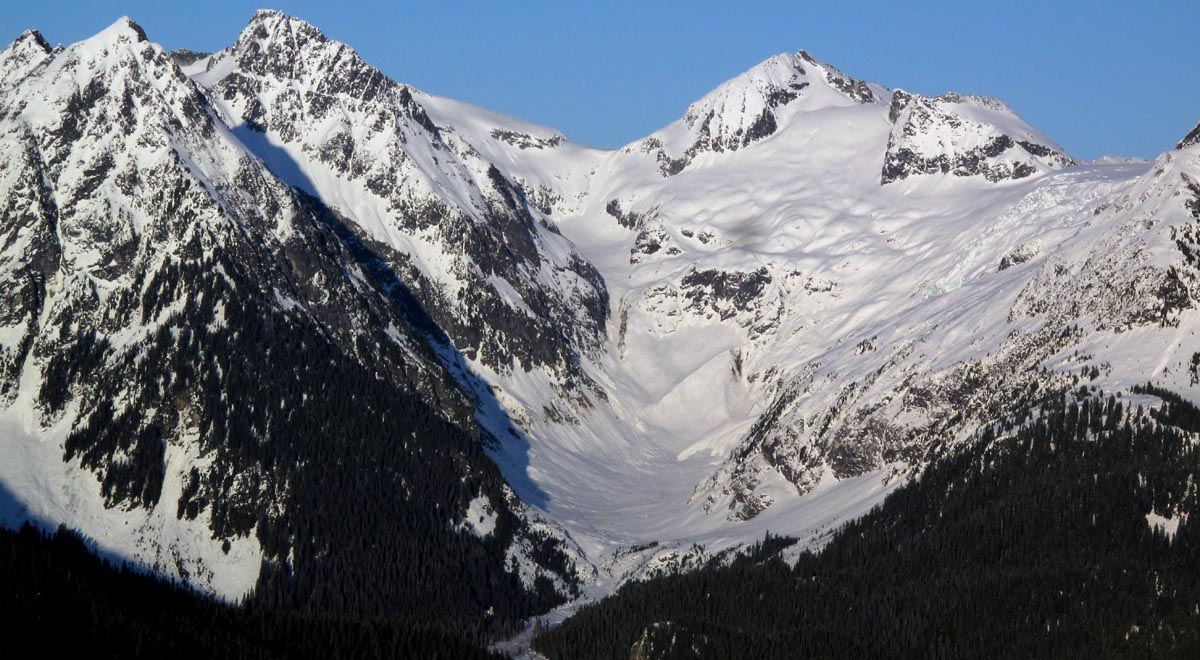 Habrich, Sky and Co Pilot in the evening glow

Atwell and the Mamquam Icefield in the evening light as we leave Elfin Lakes – taken from Paul Ridge, 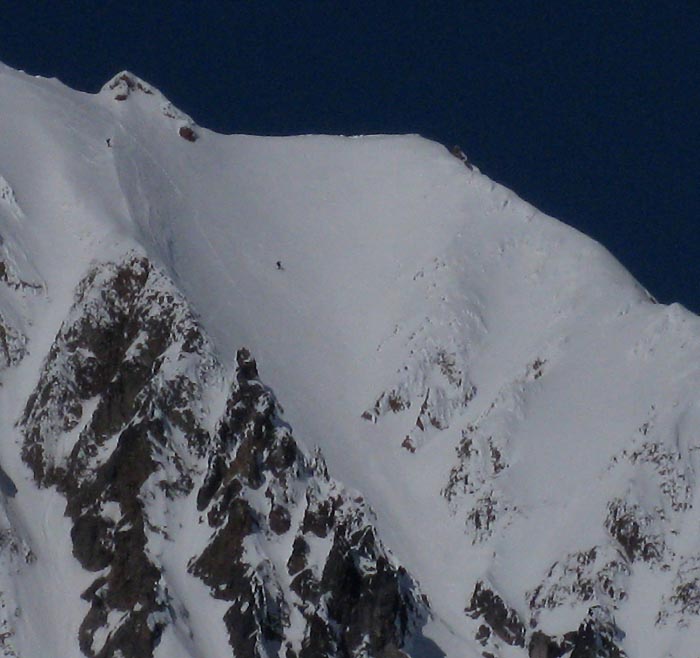 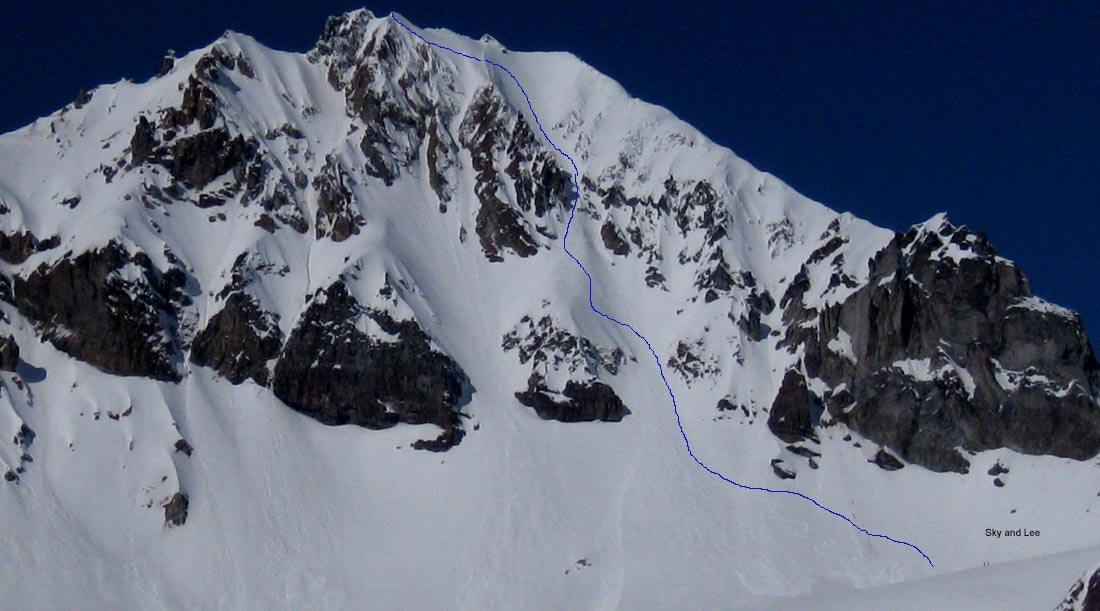 We look rather small 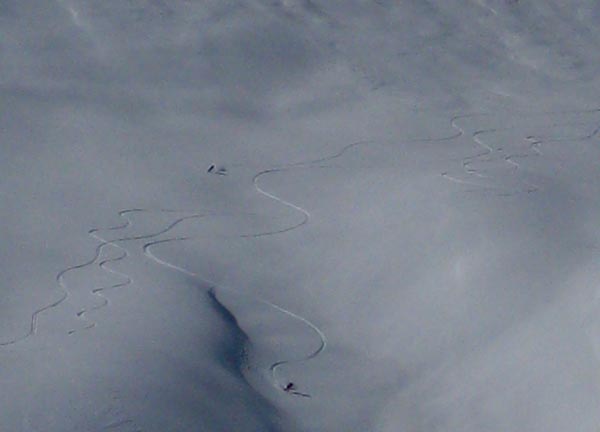 Skiing off Atwell Peak – look to your right when you’re driving to Whistler as you drive through Squampton from Lee Lau on Vimeo.

This entry was posted in 2009, ski and tagged atwell, garibaldi. Bookmark the permalink.