Toured out to Blackcomb today; my route was Spearhead – Circle Lake – Decker – Decker Saddle – then Decker Peak. Then skied SE face of Decker down Decker Creek to small lake  then worked my way around west face past Decker Main – Finger Chutes – then down 9th Hole – Mousetrap – Circle Lake – East Col then out.

Stability is very good. Sun on south aspects causes some sluffing with point releases that don;t run far (less then alpha angle) with start zones at rocks. Temps were about 2 – 3 degrees at 2400m.

Sky was clear and it feels like spring. Wind is the main concern for skiing. Prevailing is SW – 20 – 25 kts. North aspects are best skiing. Any aspect that’s wind-sheltered is great skiing (e.g. the SE run from Decker). South aspects have 3 cms mf on surface.

Decker Glacier has between 135 – 180 cms of coverage. Lots of open visible slots on east and west of approach to Decker Saddle. Not a problem with lots of viz. Trorey glacier has tons of slots so I didn’t even bother going over there.

Huge cornices overhanging 9th Hole. Finger Chutes are pretty much rock right now. Corona Bowl looks like mostly rock as does Poop Chutes. Husume looks sketch at the top but OK at the bottom. Skiers left of Husume there may be open slots also close to where the glacier wraps around the cliff bands. 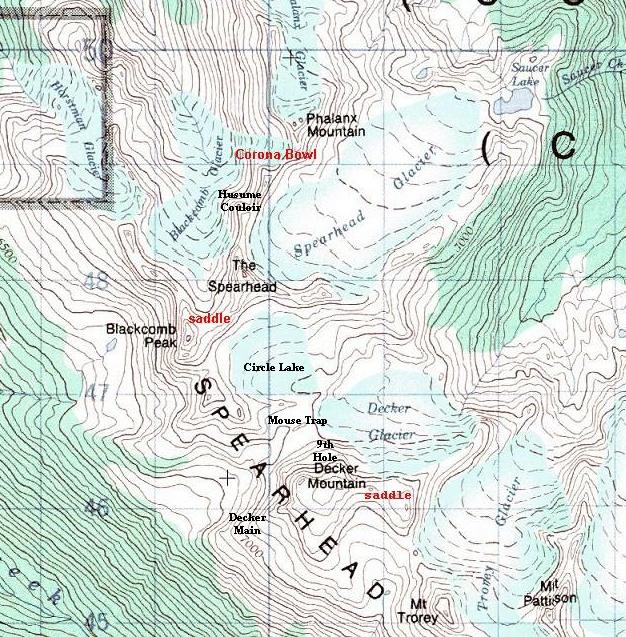 Here is a morning pano showing Trorey Glacier and Decker Glacier from l to r in the centre of the picture. I had intended to check out conditions on Trorey but travelling solo un-roped didn’t seem like a good idea looking at the exposed slots on Trorey. To picture right are Phil and Denis; two guys I kept bumping into all day. 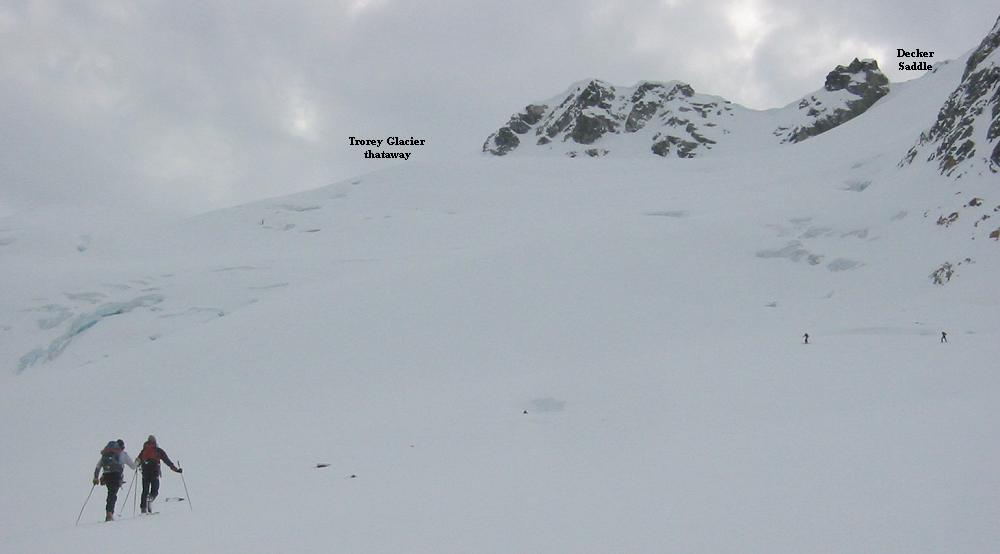 Here are two shots of the sun-affected SE faces off the Spearhead to Circle Lake earlier in the morning and later in the day. You can see the point releases off the rocks; probably due to warmer temps and solar. 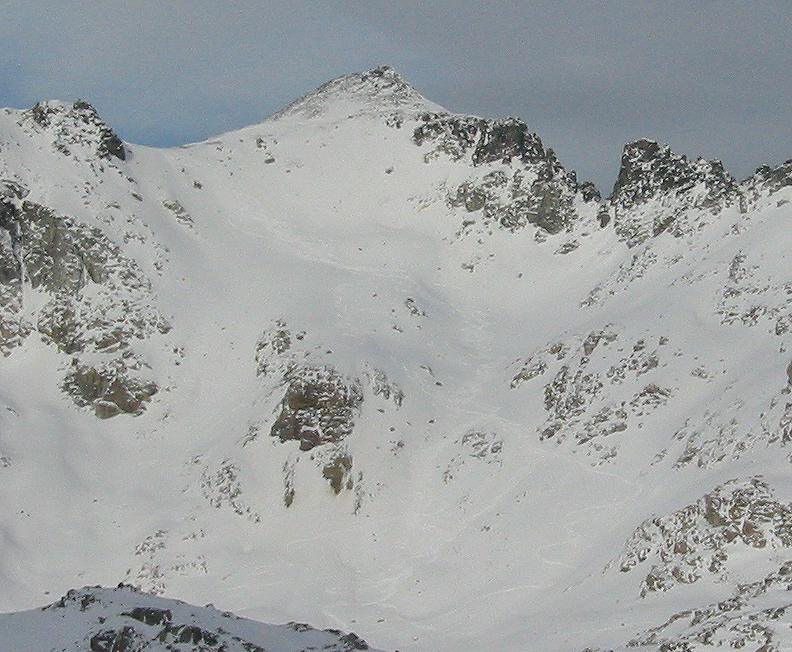 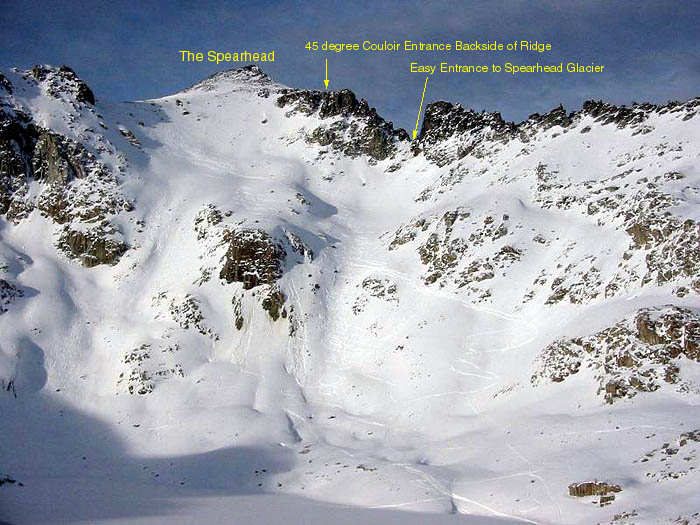 Here are some nice-sized slots on Decker just where the glacier rolls over a natural convexity. I decide at that point that I won’t ski the main face and stay on the skin track up to the saddle and keep probing. Its a little thin closer to the top so you have to bootpack the last 30m or so. 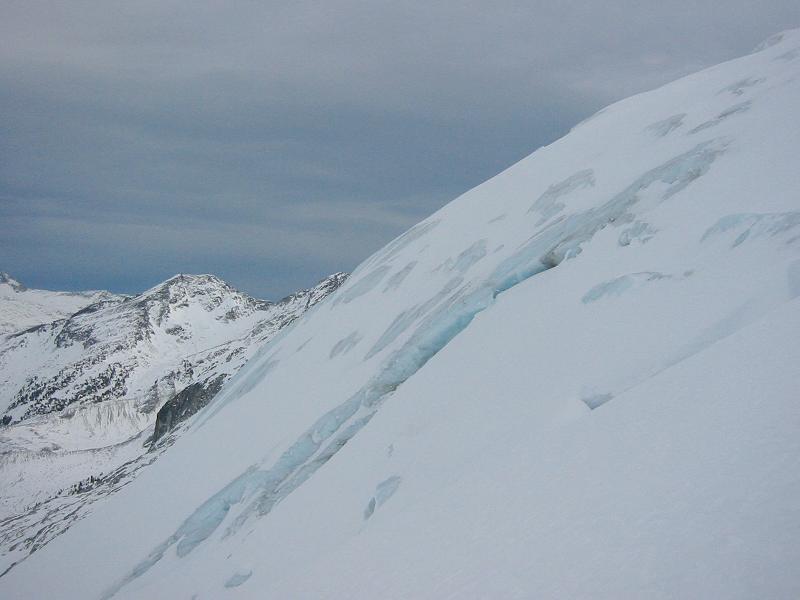 At the top of the saddle I’m on rock and relax; of course, I promptly break through a snowbridge and into a 5 foot deep hole ending on rock. It’s a nice lazy man’s way of digging a pit and assessing the layers I suppose. No surprises; thick windslab at the top; some thinner W/S layers; the mid-Nov m/f and some breaking down faceted snow at surface. Total depth of about 140 cms or so. 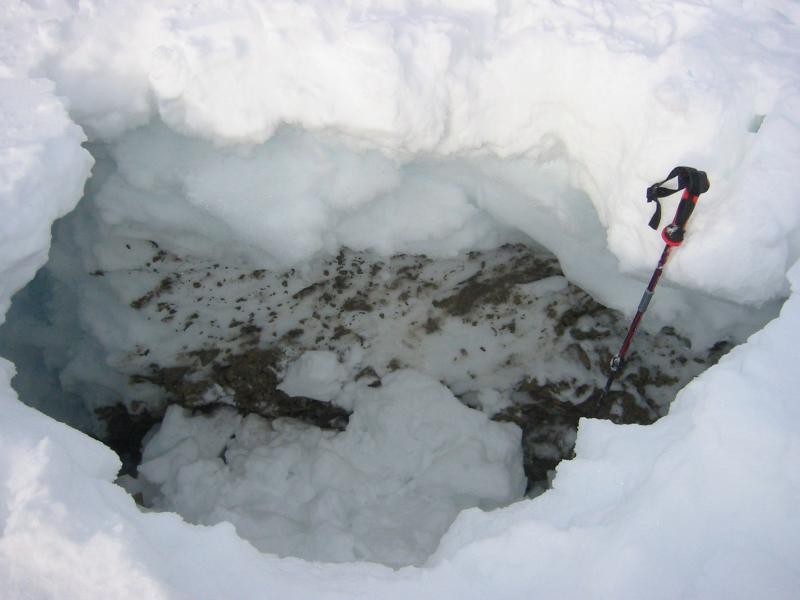 Here is a view of half of the Spearhead traverse from Decker Peak. 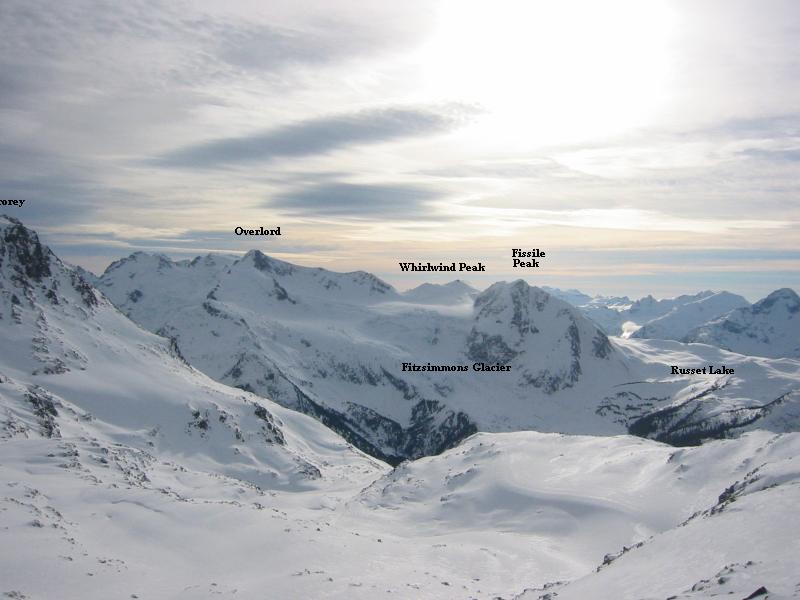 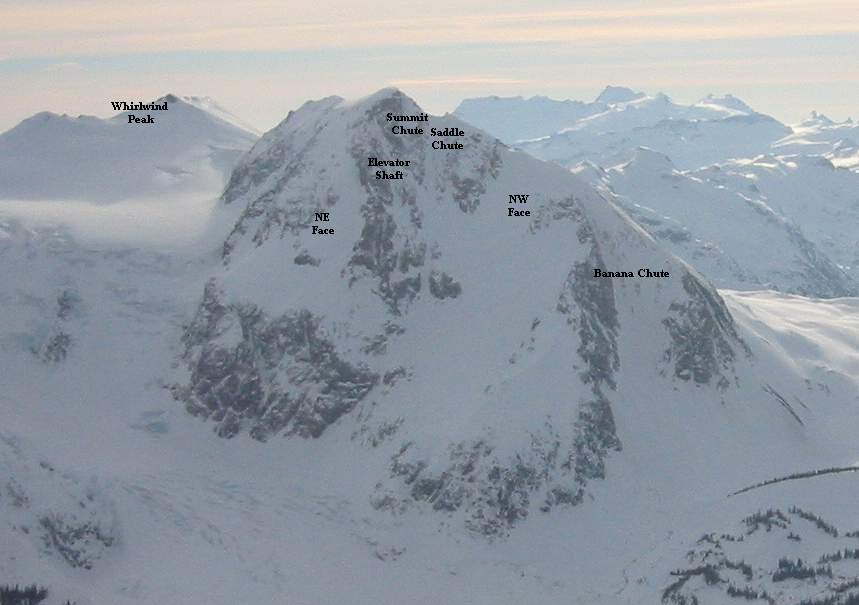 I take a run down Decker Creek finding some non-wind affected snow and making tracks down to just above the small lake and have a warm lunch surrounded by incredible scenery. 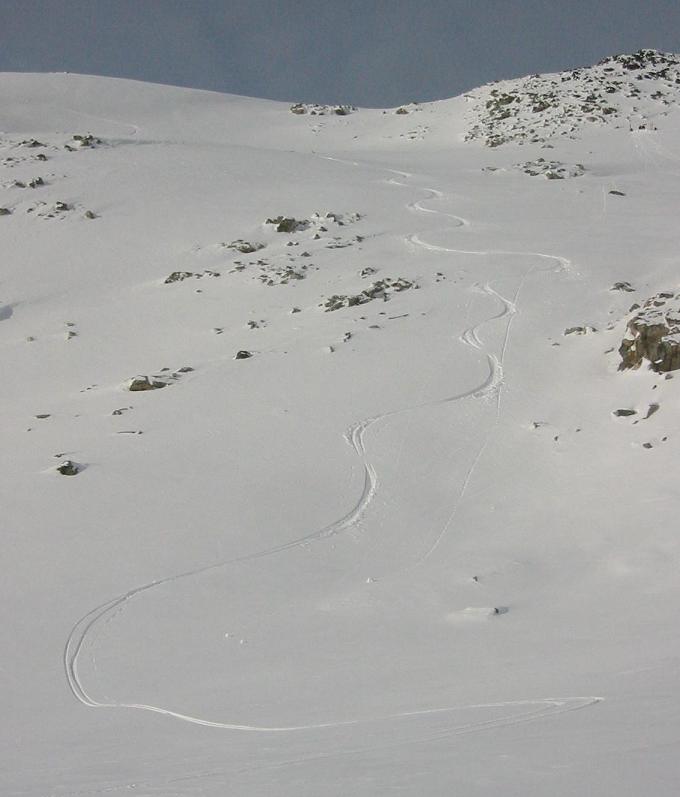 Making my way around Decker’s west face to see how bad the wind and sun has scrubbed the slopes (they’ve done quite the job) I see more point releases. 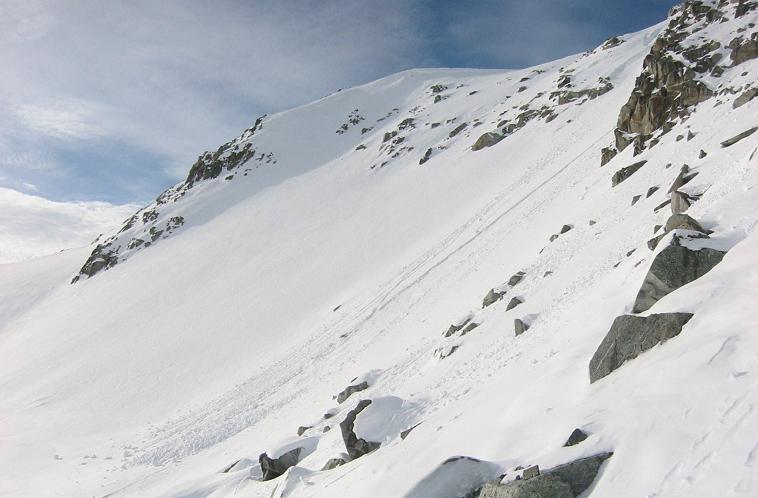 Finger Chutes are not a go at this point unless you like pain and have borrowed skis.

I end up skiing down 9th Hole with Phil and Denis making tracks in front of another large party. 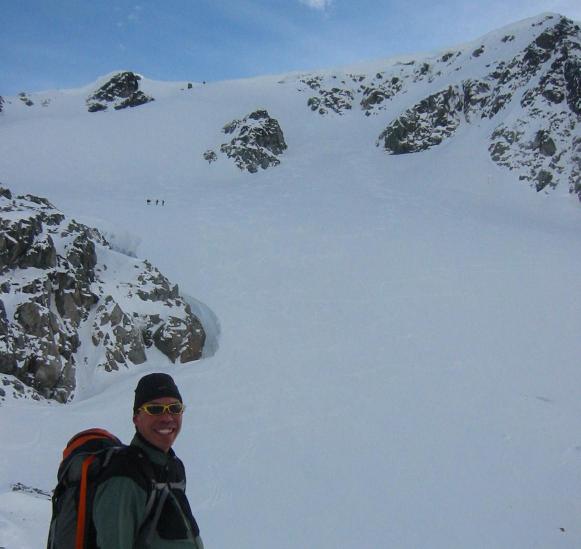 Heading back to East Col under Blackcomb Peak here’s a view of Trorey/Decker but this time later in the day. Bodybag Bowl is bony and I want to ski out the Blackcomb Glacier so took this route.

There are still exposed crevasses on the glacier but patrol has marked and roped off areas. Here’s Corona Bowl in full ski-eating glory. Needs a bit more snow. 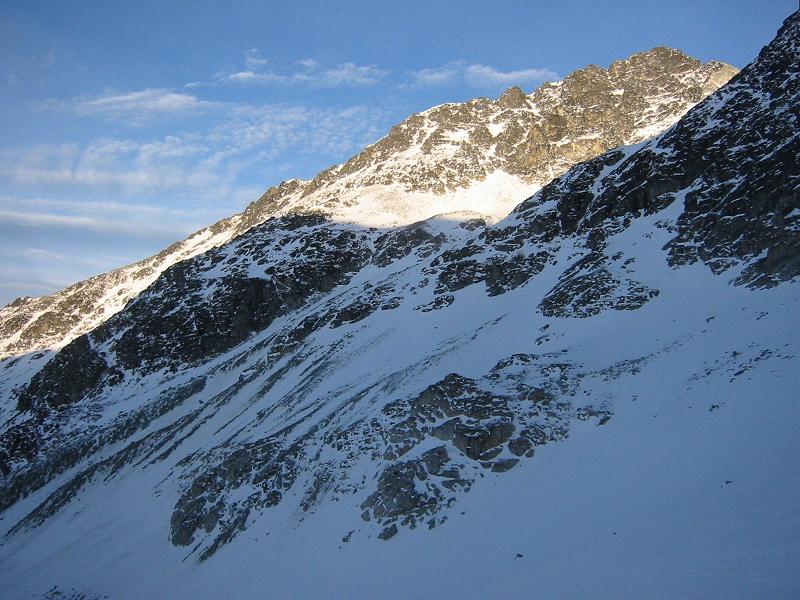 Husume looks a little better but it could be filled in a lot more. 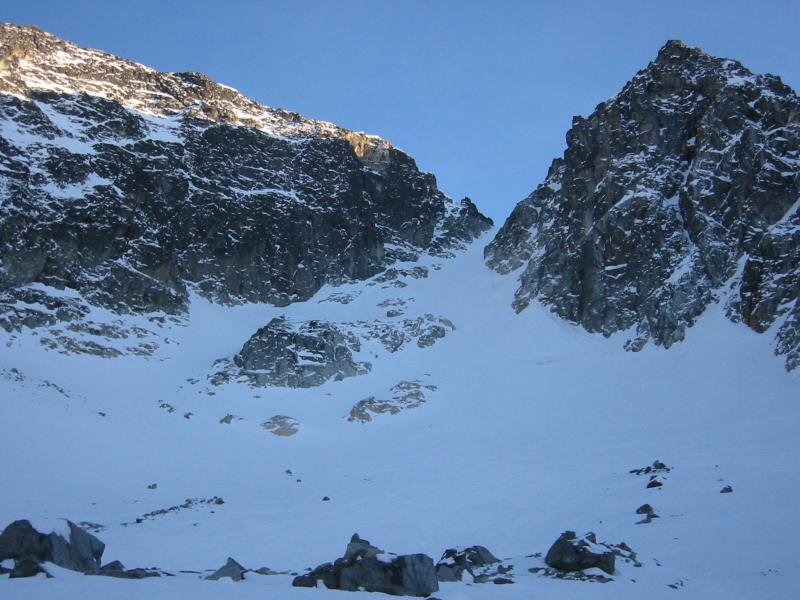 Sven and Dorothy taking in the evening alpenglow off Wedge, Armchair Glacier and Weart. 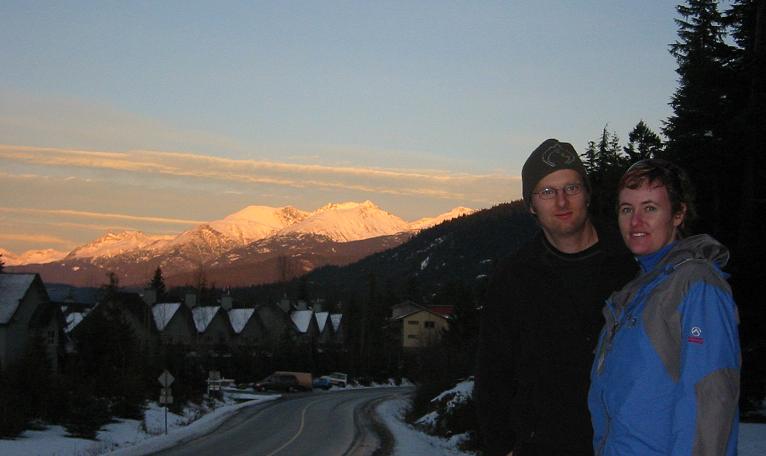 This entry was posted in 2005, ski and tagged blackcomb backcountry, Decker. Bookmark the permalink.

One Response to Blackcomb – Decker Circumnavigation