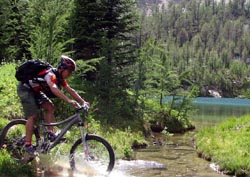 The Brewer Creek – Panorama ride is described in the latest Doug Eastcott’s classic Backcountry Biking in the Canadian Rockies guidebook. An online sampler of this can be found at trails.com. Parts of the Brewer Creek singletrack and trail were used for the 1st day of the 2008 – Trans Rockies mountain bike stage race. As the Trans Rockies is a glorified road race on dirt, it’ll be interesting to hear the reaction of the participants to tough alpine singletrack and hike-a-bike. We set out to ride Brewer Creek mid-way through a week’s vacation in the Rockies. The trail itself is a decent distance of almost 25km ending with a 1000m descent on lovely singletrack. The riding and pushing your bike part takes place at a fairly decent elevation of above 1800m – the prize is a ride in the alpine!

Be forewarned that getting to the trailhead involves a pretty long shuttle of 47km on 2WD logging roads. We dropped one of our vehicles at the base area at Panorama ski resort close  to the tennis courts. We then drove to the trailhead. 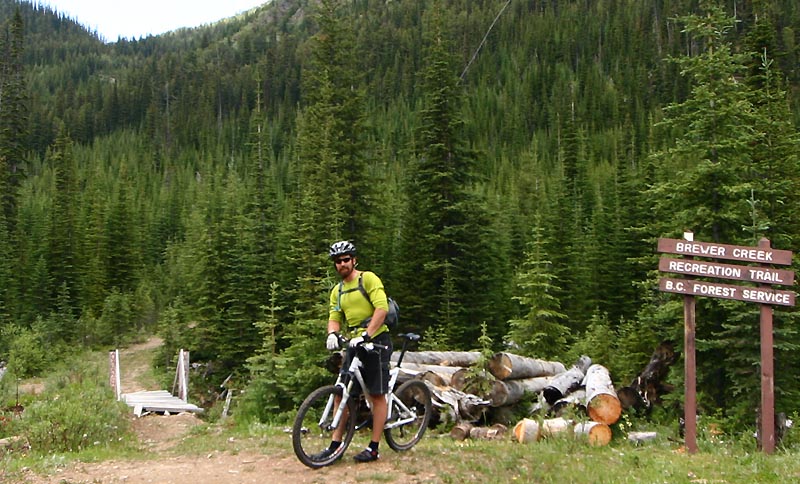 Greg getting ready to climb.

Use the directions in the Eastcott book (or better still use directions from Matt Gunn’s excellent hiking book for the area or the Backroads Mapbooks for the Kootenay Rockies area) to get to the trailhead. The Eastcott book does not mention a few new logging roads that may confuse at prominent junctions. For purposes of directions, follow the snowmobile signs and try to keep in mind that the mainline accessing this trailhead follows the creek. If in doubt, download the GPS track or see the map at the end of the article.

Alternatively, the directions for snowmobiling work just as well to get to the trailhead (this area is popular with sleds in the winter – terrain and access are amazing).

Directions are excerpted below – keep in mind that you can drive all the way to km 26 in a regular 2wd car.

Access – Drive south 17 kms from Invermere (or 8 kms north from Dutch Creek Hoodoos) along Westside Road turning onto Hawke Road. This takes you through an old burn area at km 8 where you stay right. Park at km 10. Snowmobile the main road along Brewer Creek FS Road staying right at the km 11 mark and left at the km 12.3 mark. Road’s end is at km 26. 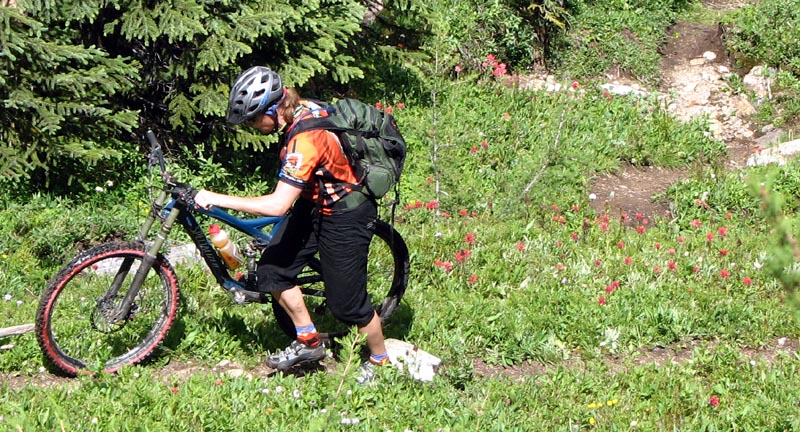 Pushing up the Enduro in the Alpine Flowers! Good day to wear longer leggings due to bugs.

Brewer Creek’s trail proper starts as an old hiking trail that isn’t often used. You park at 1700m elevation. The initial climb involves a lot of pushing through forest. You are rewarded with a really nice alpine meadow and views west to Mt Brewer and Brewer Ridge once you get to about 2000m after approximately 3 km of biking and hiking. 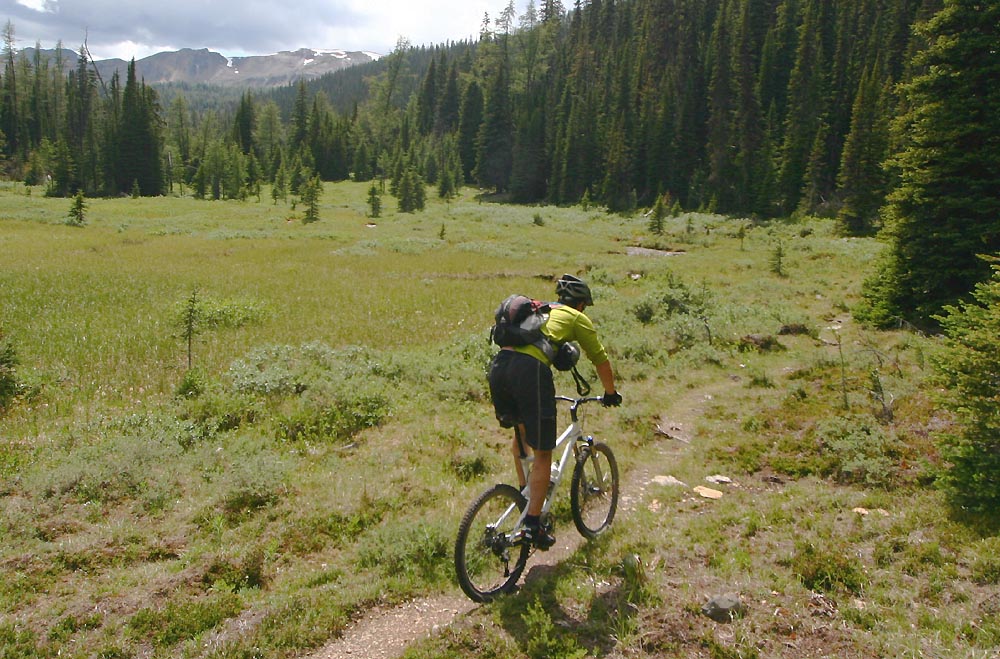 Once you get to the alpine meadow, you get into single track and ascend to a prominent junction at an elevation of about 2100m about 4.5kms into the ride. From there you can elect to keep heading W to Mt Brewer or go N (as we did) to start heading towards Panorama ski resort and complete a loop. 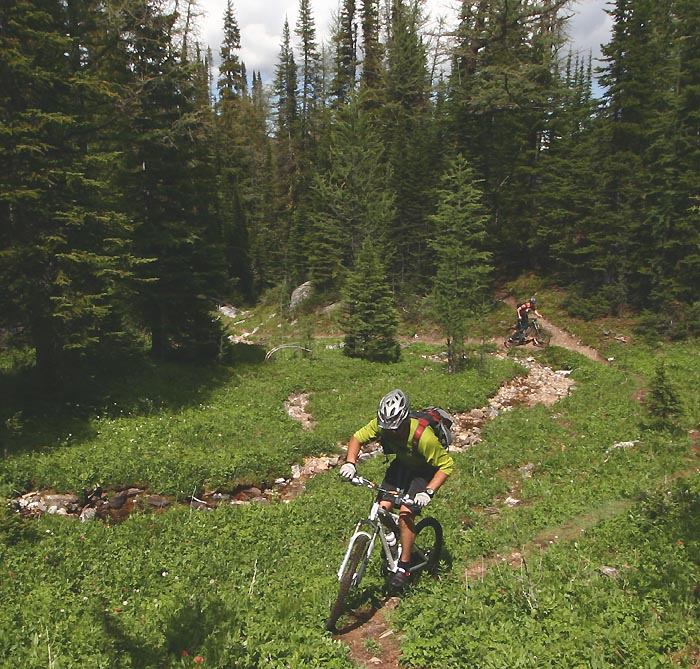 I’m pretty happy pushing my bike in the background! Greg powers up the rise 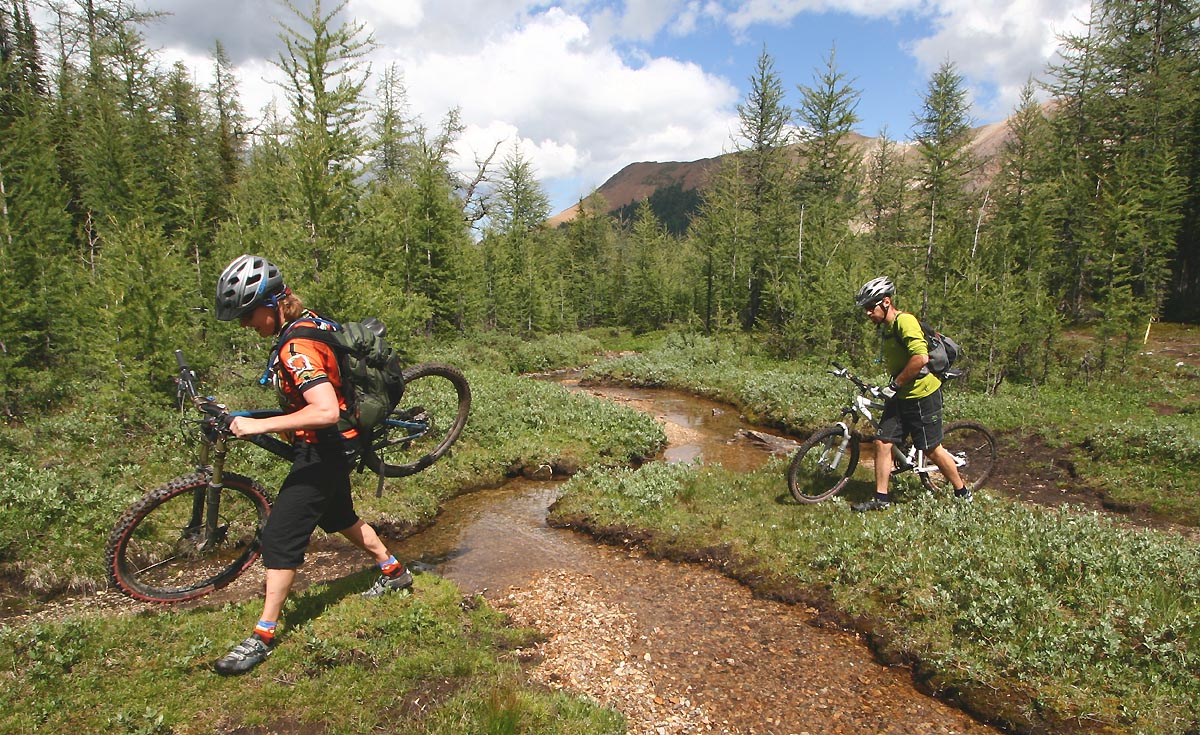 Creek crossing in the alpine meadow. 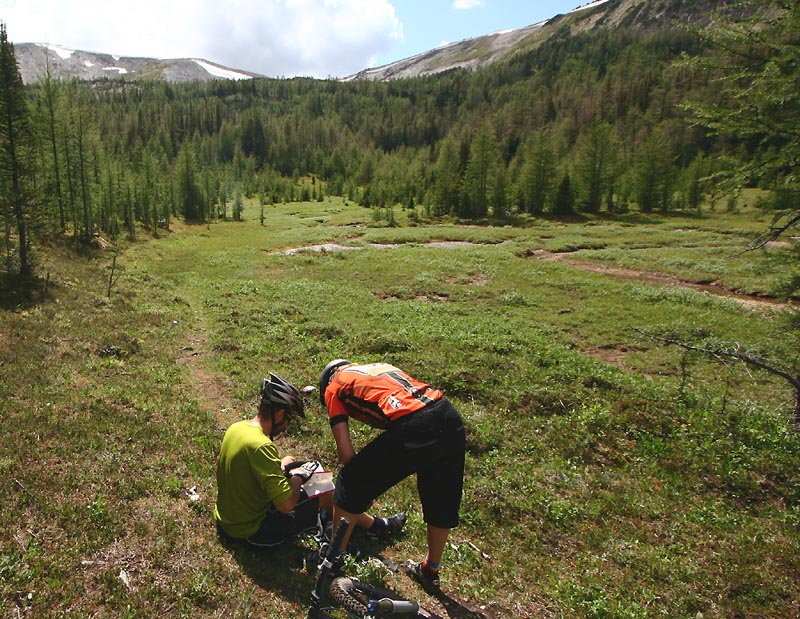 Nice spot for lunch at the trail junction to orient where are are.

A group of hikers were on the ridge

After turning N towards Panorama we skirt along the talus slopes left probably by receding glaciers. The trail winds along alpine tarns left by the melting pow. At this point, the trail is incredibly scenic and you can ride almost all of it for quite a distance as you’re on a plateau surrounded by mountains and ridgelines. The trail actually rolls along sidehills and alternates climbs and descents eventually ascending to a highpoint of about 2400m.

If I didn’t have sea-level lungs, I might actually have been able to climb a bit more of the sections – or that’s the story I’m sticking with! 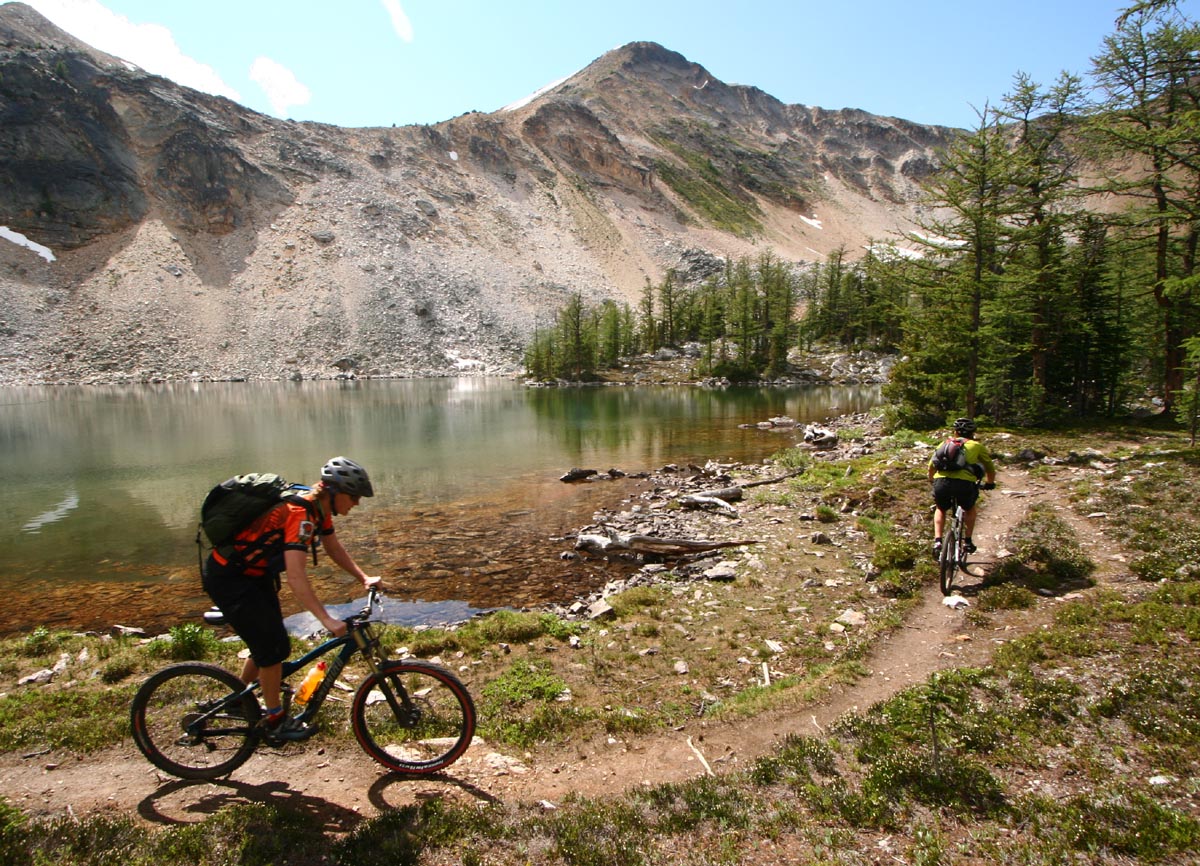 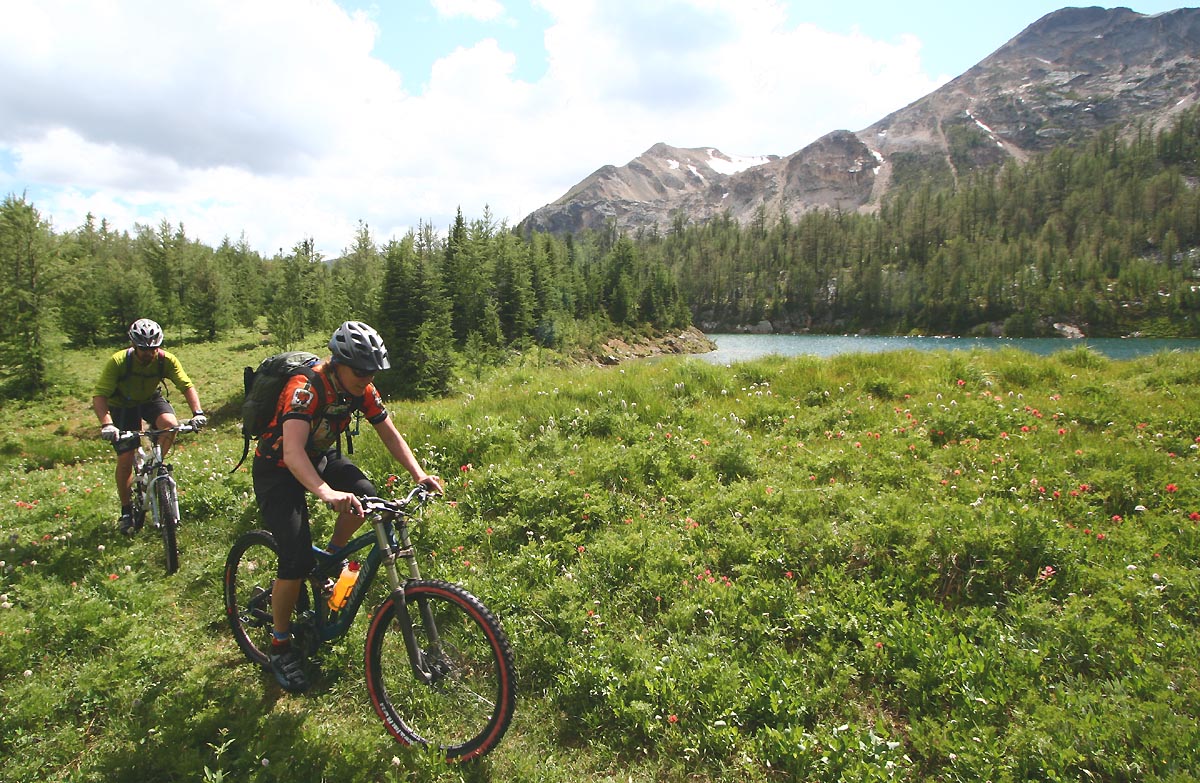 More flowers and alpine peaks. The bikes romping in the flowers! 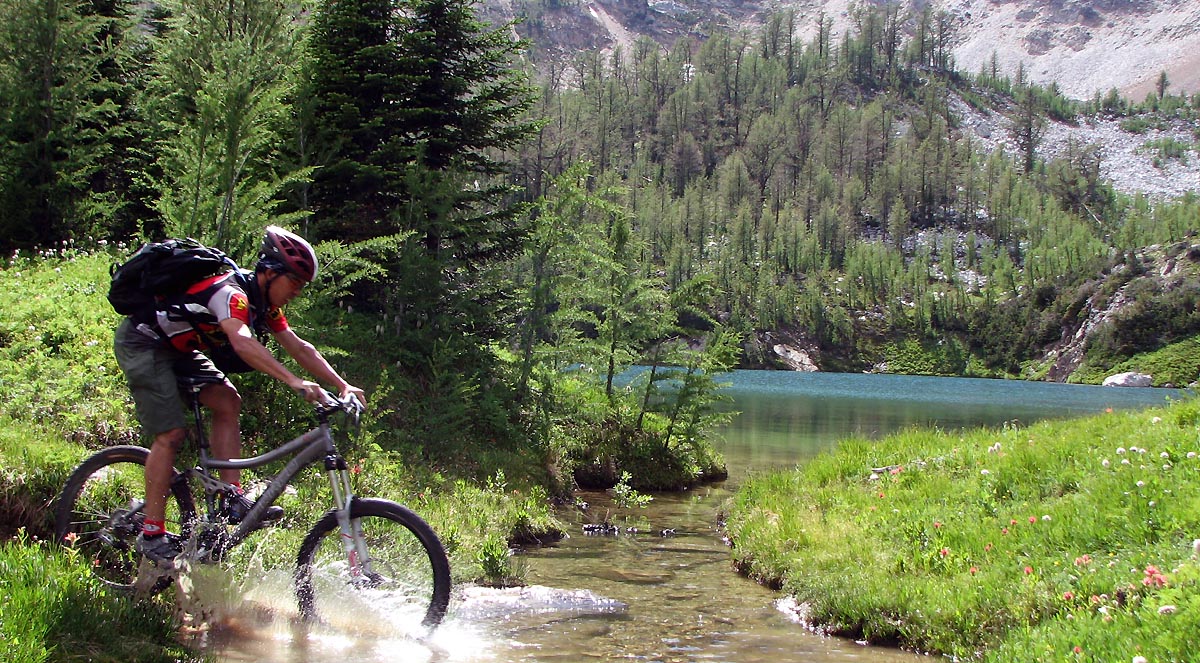 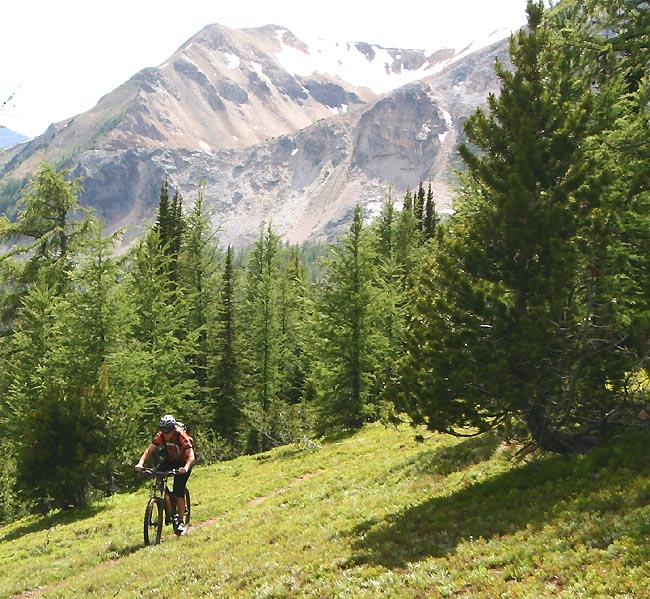 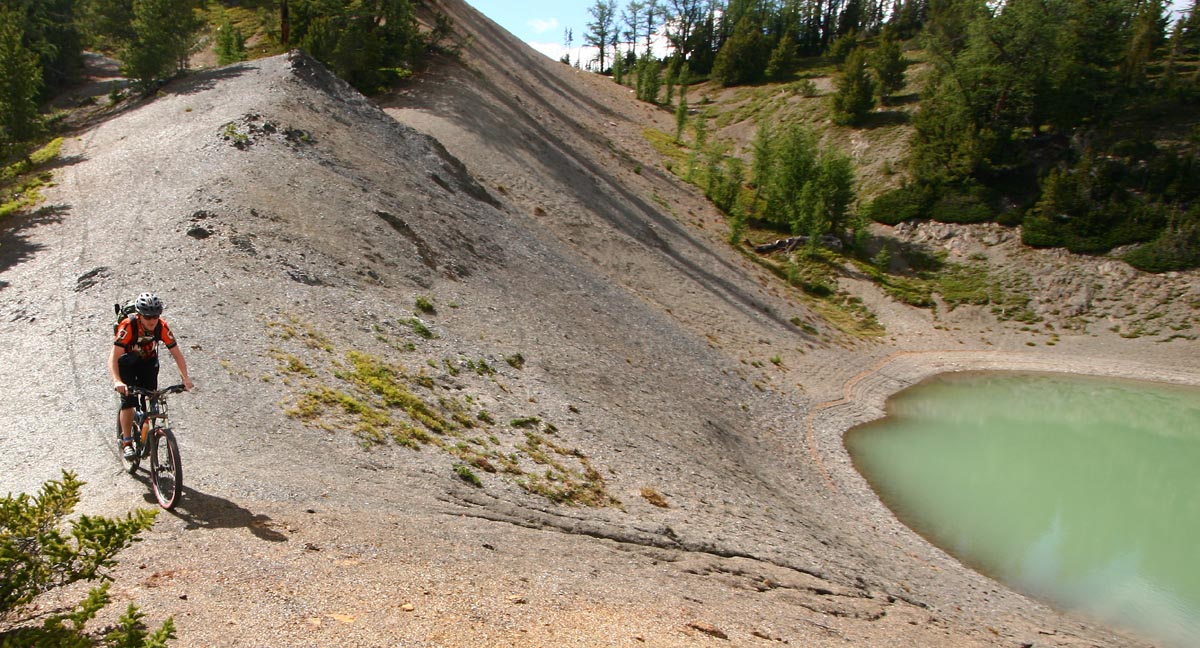 An interesting feature on this ride, this slope was quite the moonscape. 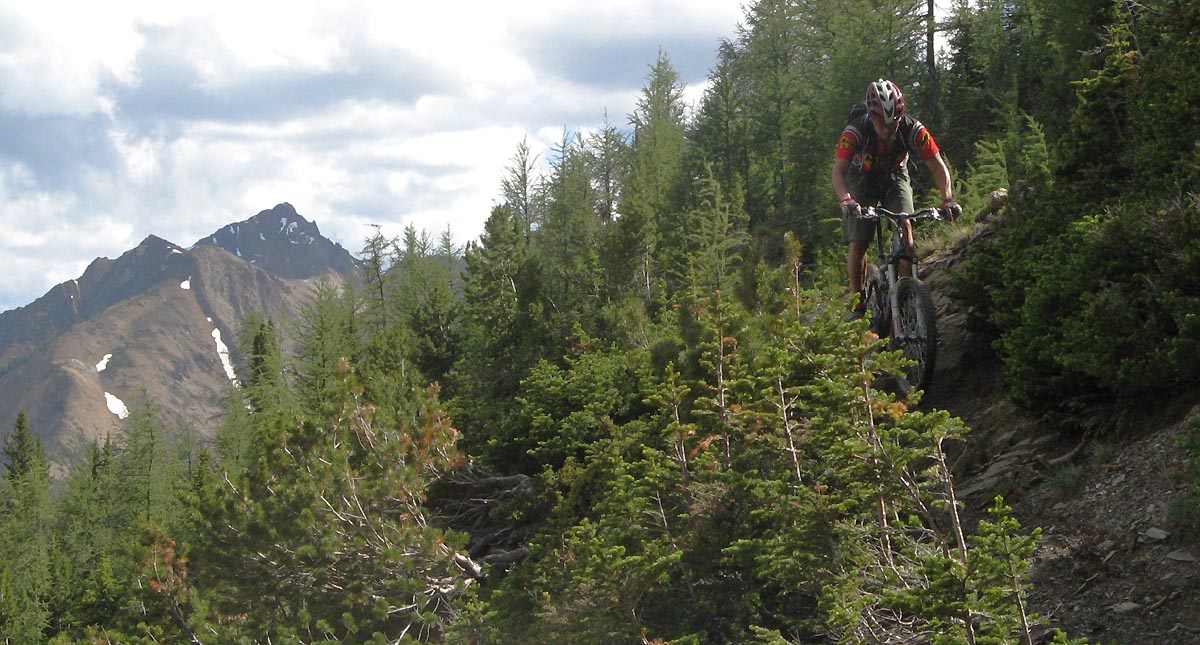 Good thing Lee wasn’t looking at the peak in behind on this technical part of the trail! He would have been distracted thinking about skiing!

There is a short descent on the plateau dropping about 150m after you get to the highpoint approximately 8km into the ride. You get a taste of the buff singletrack to come, then cross a scree slope and then ascend to another part of the plateau – all the time getting distracted by stunning views. 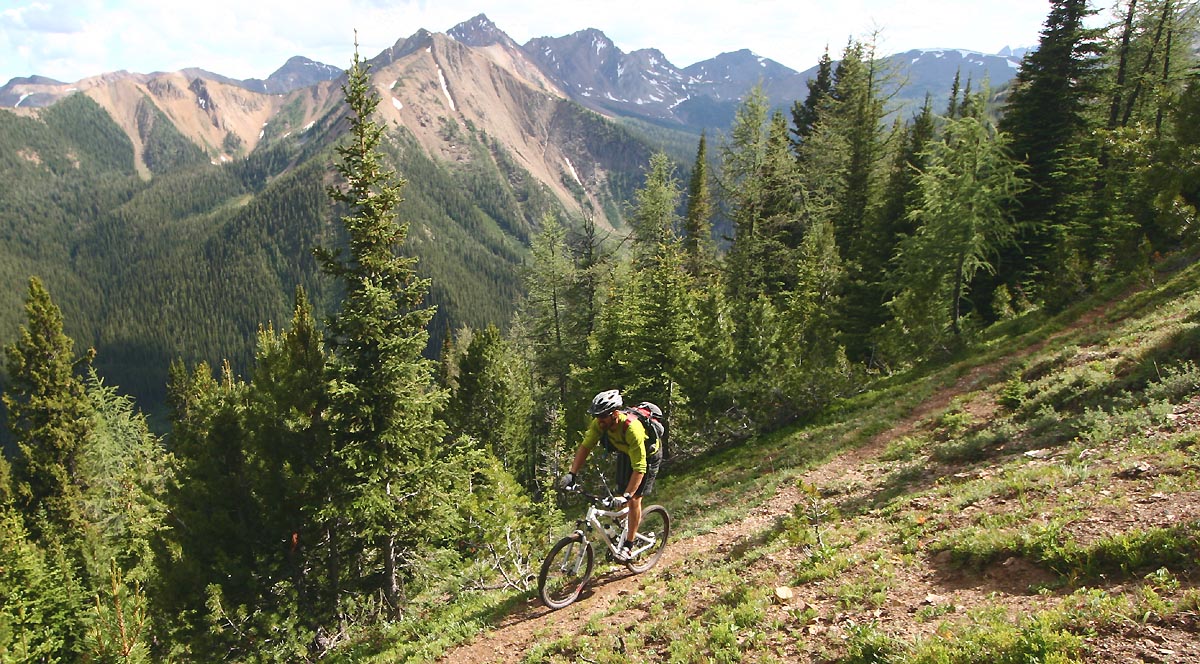 Greg on the sidehill – Brewer is the prominent peak far in the back. 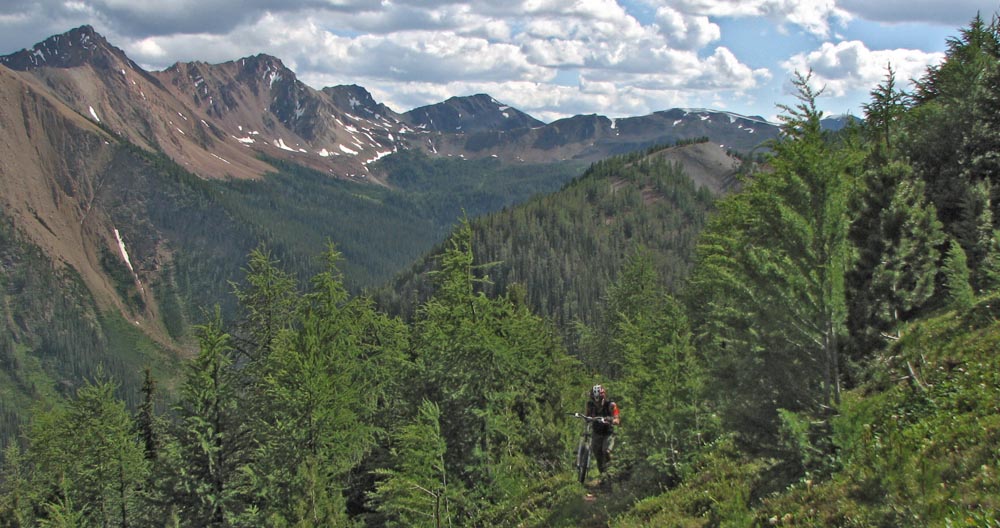 We continue on along the alpine plateau and ridge then descend to a pass at an elevation of about 2300m under Goldie Mountain. This is now 14km into the ride. Stopping a lot, taking pictures and gawking at the view it has taken us approximately 6 hours to get to this point. It’s not much of a pass but its hard to miss as there are two rather ratty cabins here. This was probably an old horse camp which didn’t seem to get much use now. 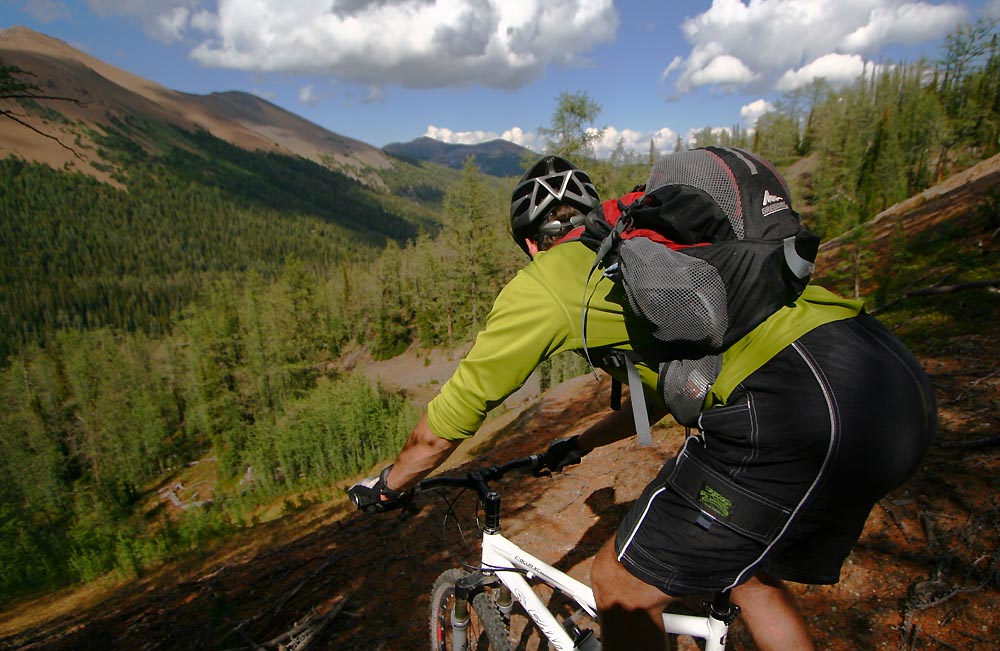 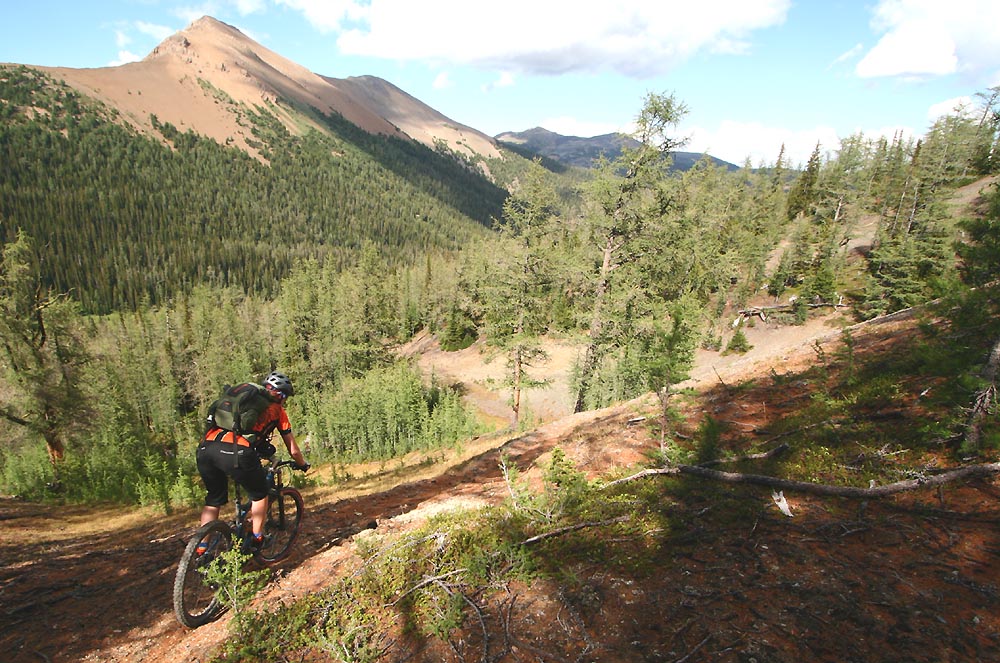 Sharon heading down the trail too. 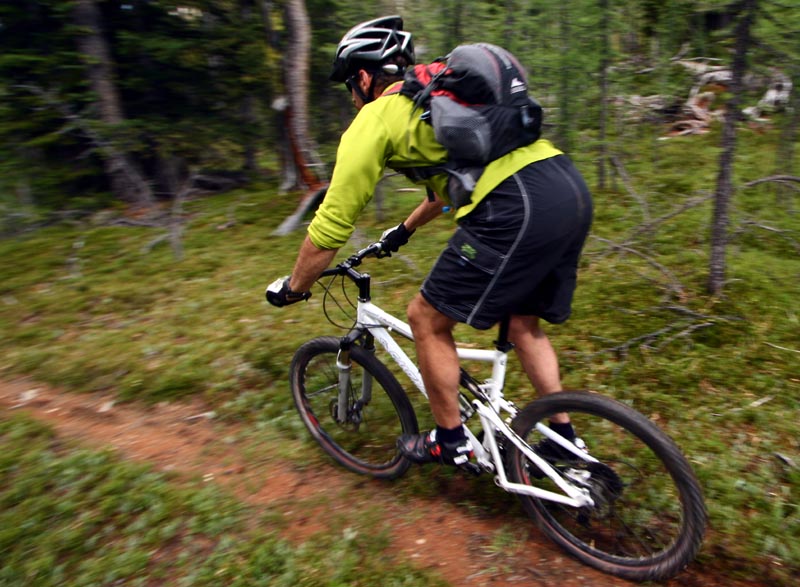 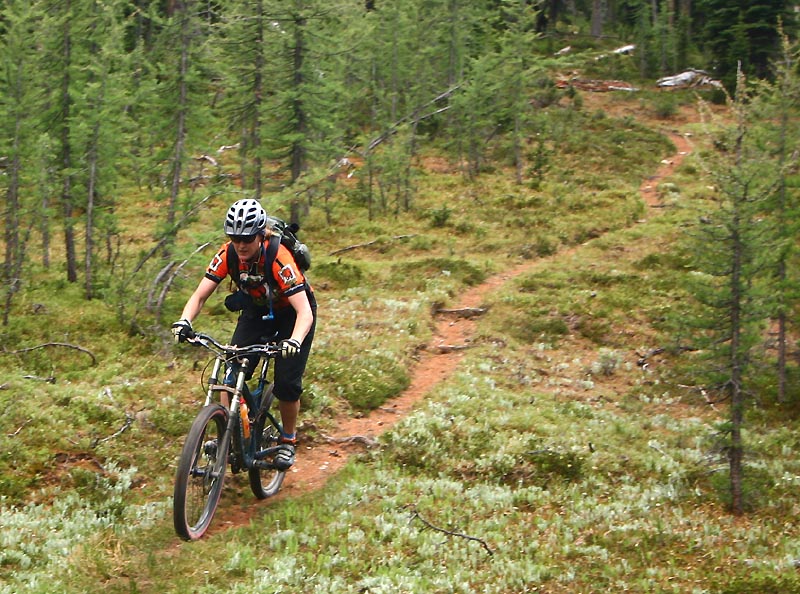 Time to get some alpine flow.

Sharon heads to the pass!

Just after the pass you start riding down towards Panorama resort along Hopeful Creek.

I am not sure who built this trail ~ probably horse people. It didn’t seem to get much use since lower down its getting quite overgrown. Too bad as its a really nice trail – nice enough that it makes you forget about pushing your bike. After this exhilirating and fast descent we’re on the paths around the Panorama golf courses. It’s quite the contrast between the quiet of alpine ridgelines and popping out on to paved paths around grassy greens.

Our 1000m descent to Panorama is a breathtaking descent and takes place over a distanc of about 6km. 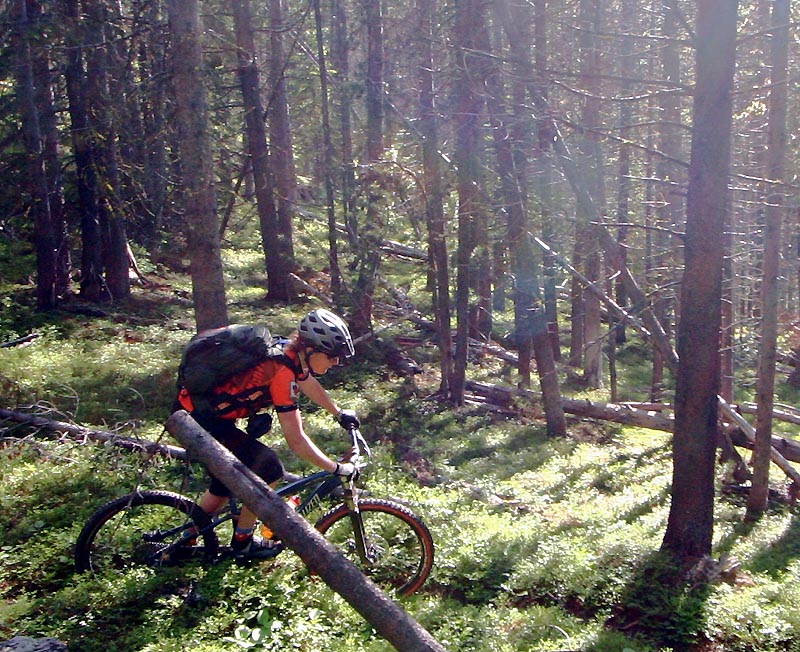 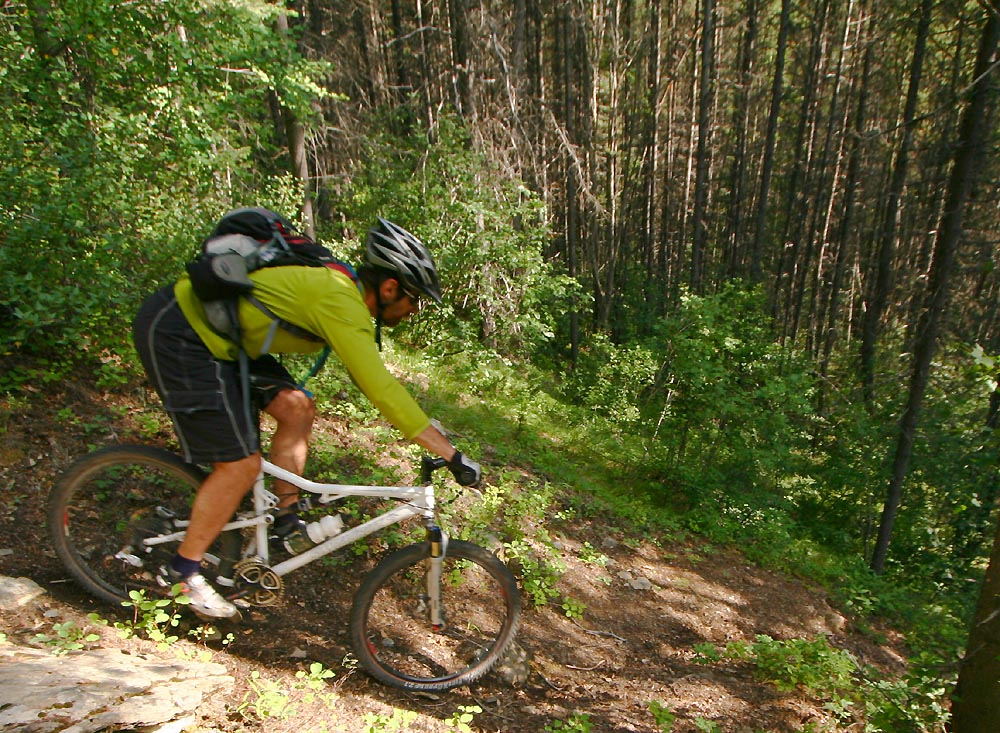 Sharon and Greg rippin’ down! 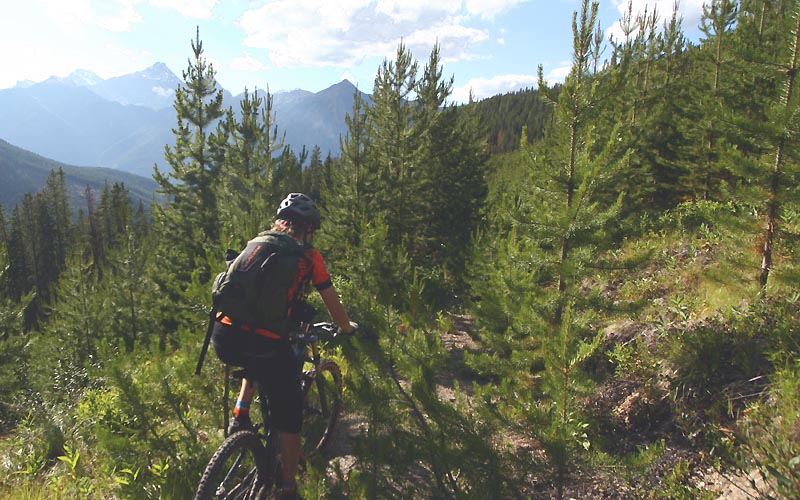 Out of the trees we’re now in a clear cut adjacent to the ski area, we continue down the trail. 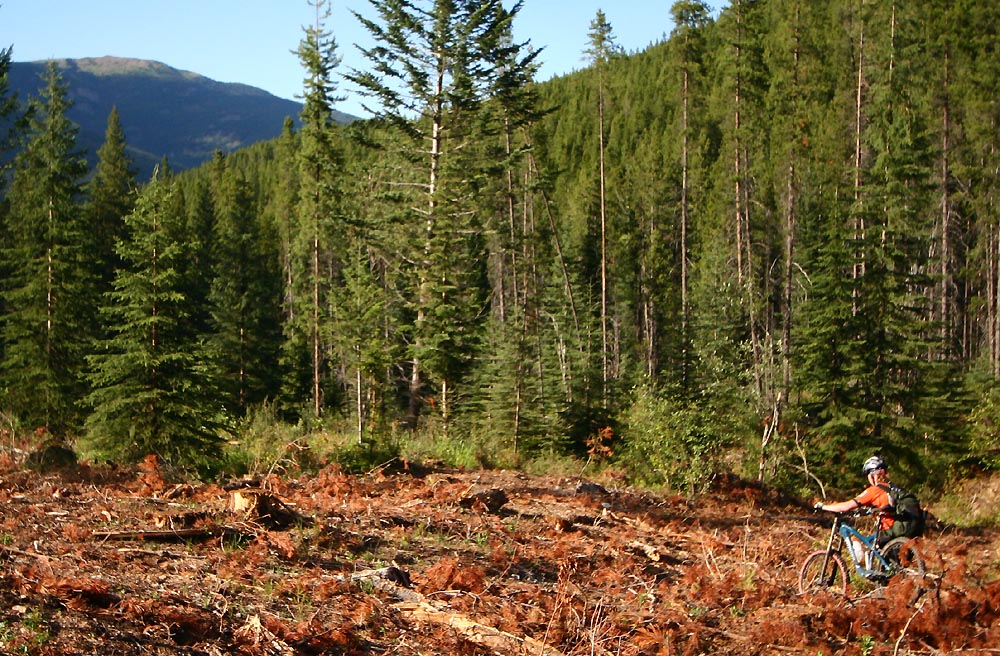 The single track ended in this clear cut. hmmm more ski runs or a golf course? 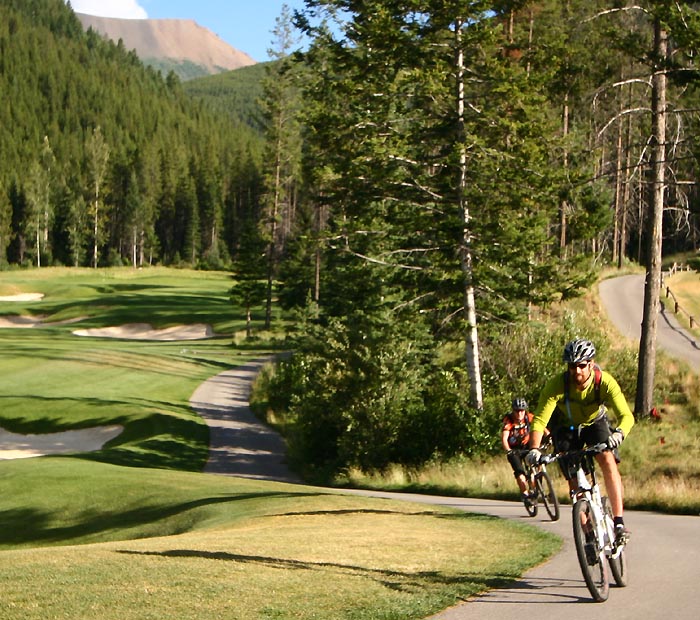 Then we pop out onto the golf course much to the amazement of the golfers! Where did they come from???? – we can hear them exclaim

We debated whether it was a good idea to put up a map and publicize this trail. We figured that it wouldn’t hurt because: (i) it had already been mentioned in guidebooks; (ii) it actually needs more use as it is getting overgrown; and (iii) being in the Trans-Rockies means that this trail isn’t exactly a pristine secret. So download the Garmin file for this route here.

Our elevation profile is below. 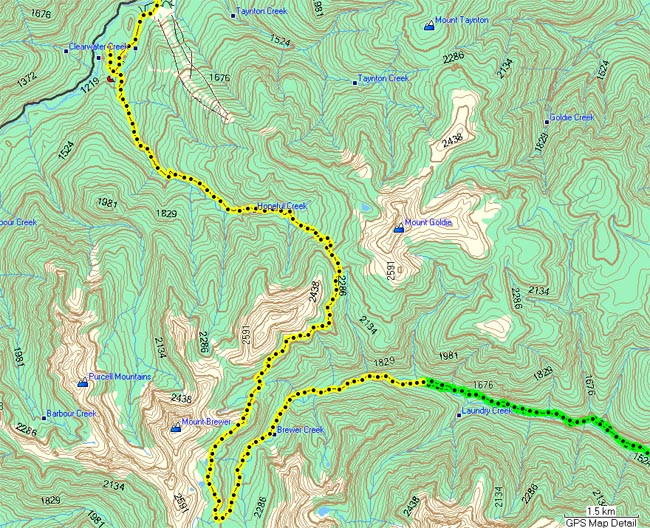 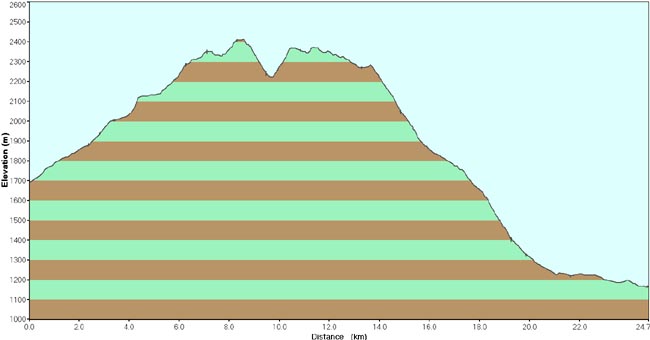 This entry was posted in 2008, bike and tagged brewer, canmore, panorama, rockies. Bookmark the permalink.