Max and I went for a pleasant 13 hour ramble starting at 9am and finishing at 10pm; covering 22km and 2200m of elevation. We weren’t too hopeful that the last few days of snow would translate to pow as freezing levels were 2000m and Brunswick (our high point) was only 1800m. It was good that we weren’t expecting much more than a nice tour. Snow was poo; the 15- 20 cms of snow was water-logged and had fallen on a hard crust. Wet slides were easy to trigger but luckily also easy to manage as long as you had space.

We ended up climbing to Brunswick S Ridge then navigating huge cornices on the ridge to the ridge just above the NE couloir which had been our goal. We passed on the NE couloir; it wasn’t that steep (45 deg tops?) but there was no room to manage wet slides. Tried to see if we could traverse to the col E of the Harvey Creek headwaters by the back side but it would have been a hell traverse with tons of exposure. So ended up skiing down and then up to Hat Pass. It was only 4pm; Max and I felt in an exploration mood so we decided down to ski Yahoo Creek. It turned out to be pretty decent; wide open trees from 1450 to 1100m; patchy snow to 1000m as it was west slopes; then we picked up the Hat Pk trail at about 900m after about 100m of character-building bushwhacking. Gratuitious 150m additional climbing up to get our shoes which we left on the Brunswick trail and then skipped back to Lions Bay and out. 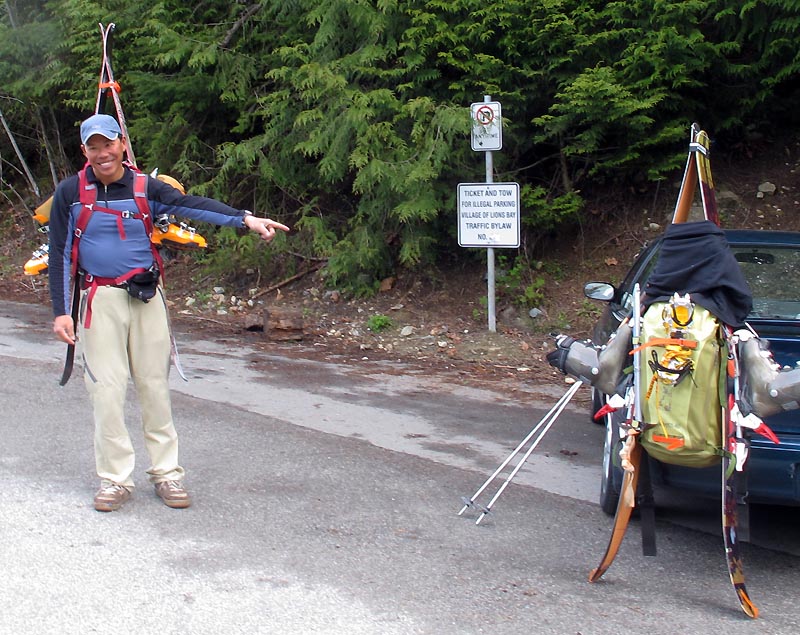 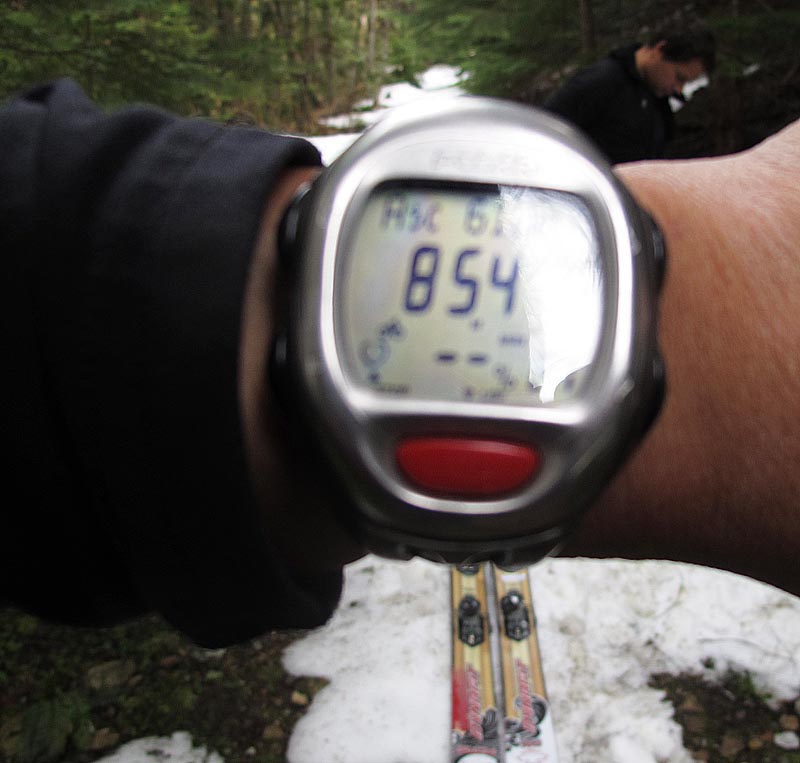 600m of hiking to get to snowline 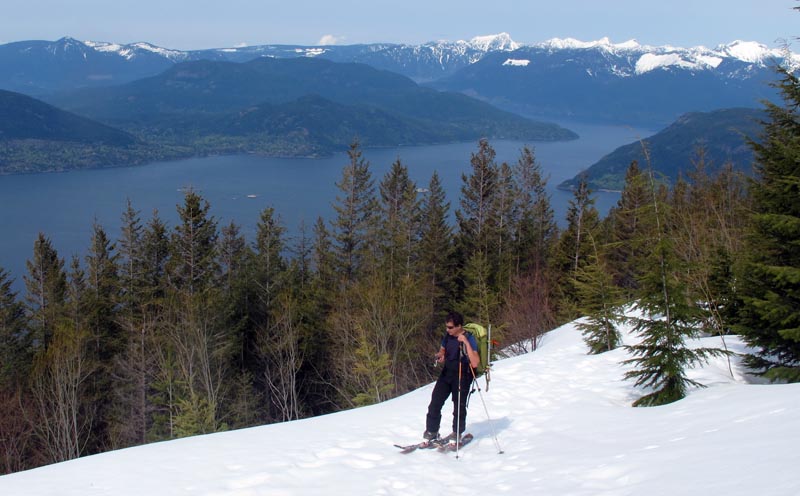 Obligatory snow and Howe Sound shot on the Brunswick trail 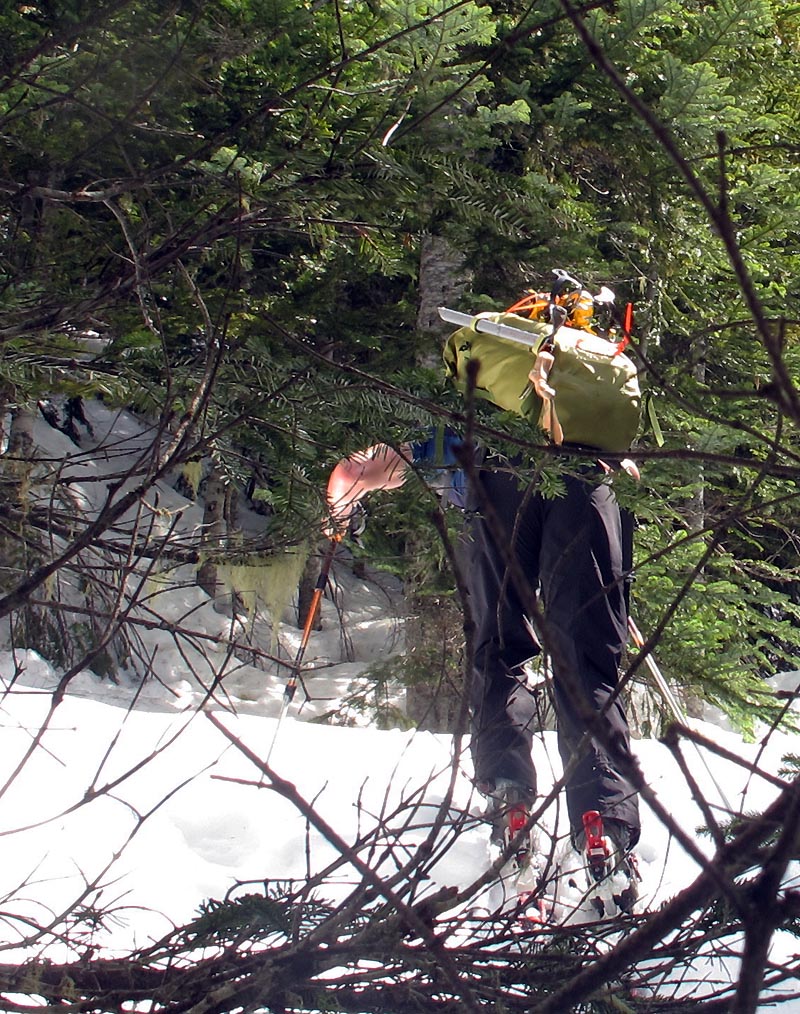 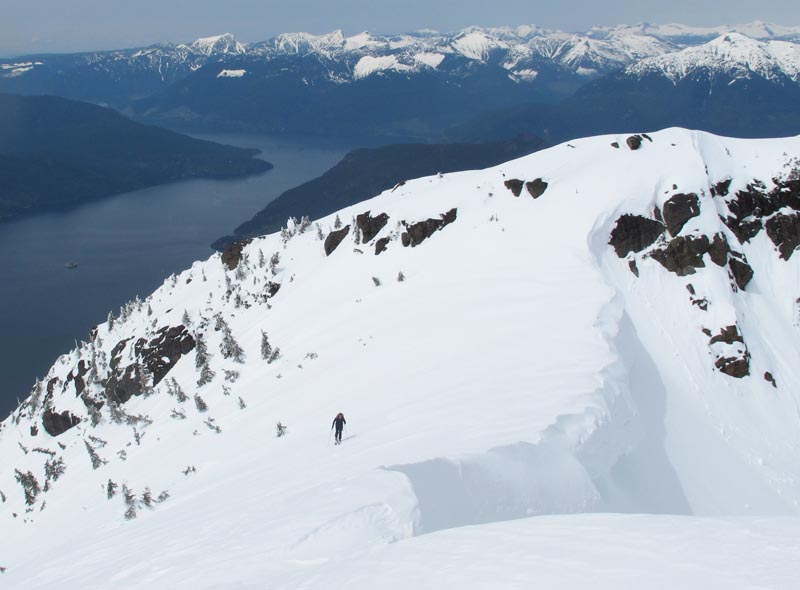 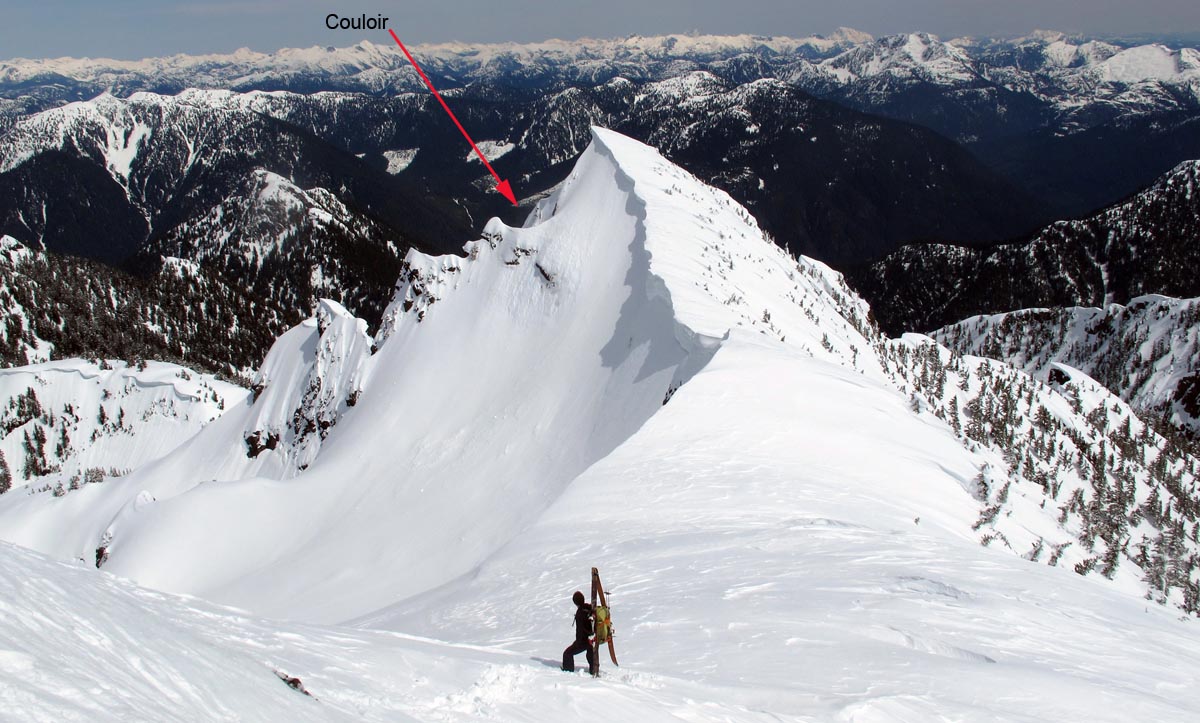 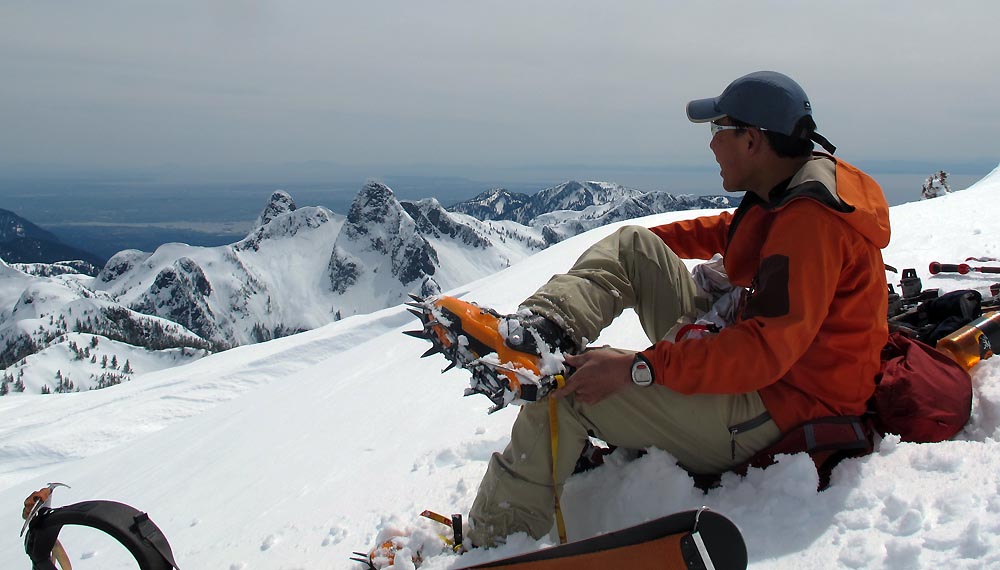 Transitioning back from crampons to skins. View of Vancouver and the Lions 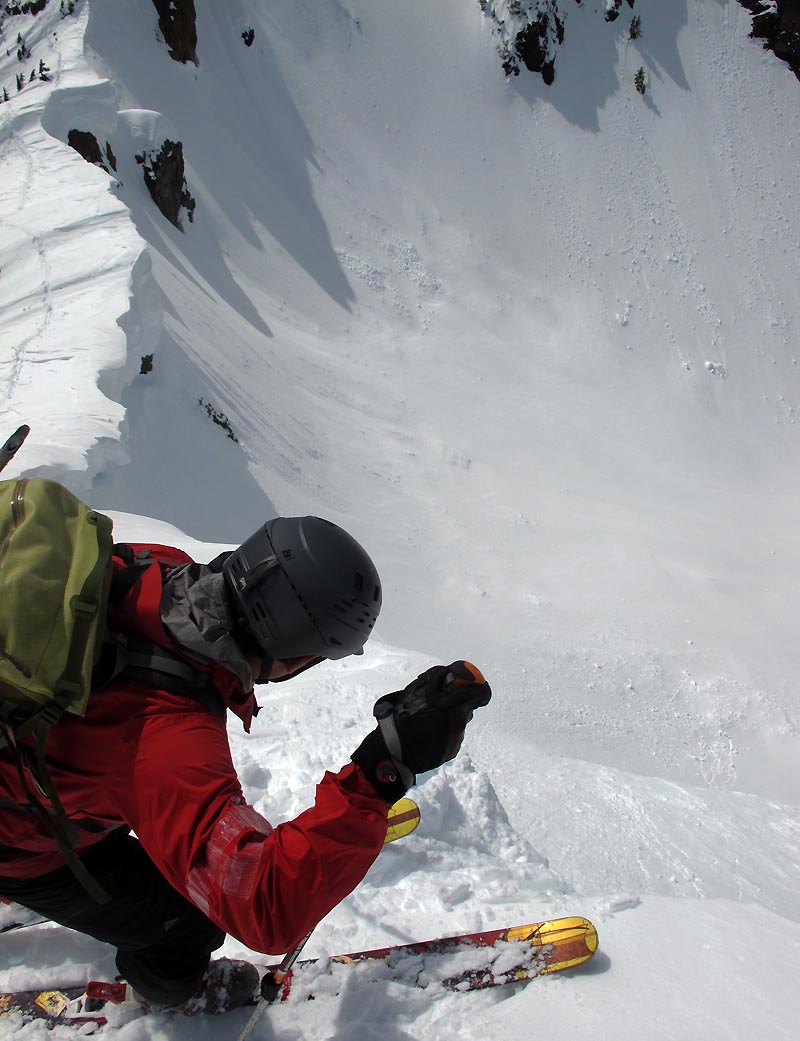 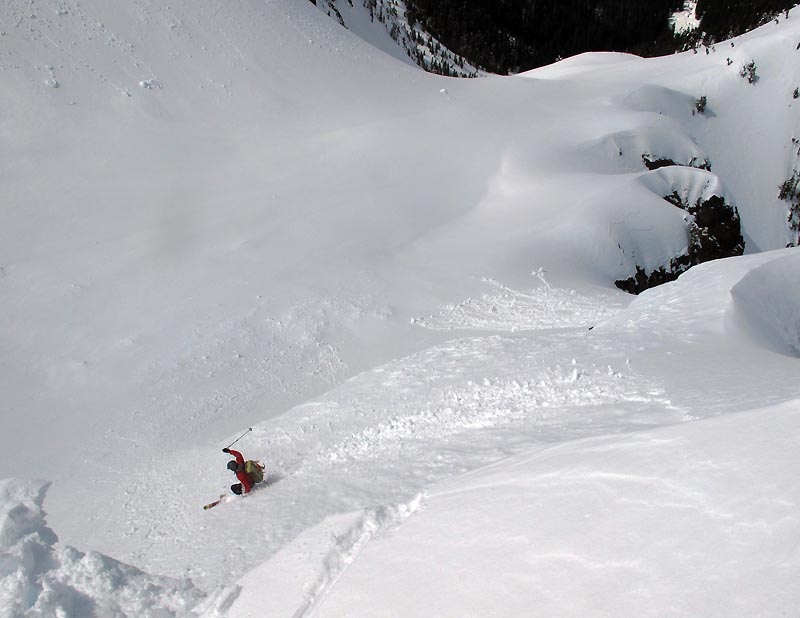 The guy who brings the helmet gets to go first. Boy do those wet slides ever run easy. 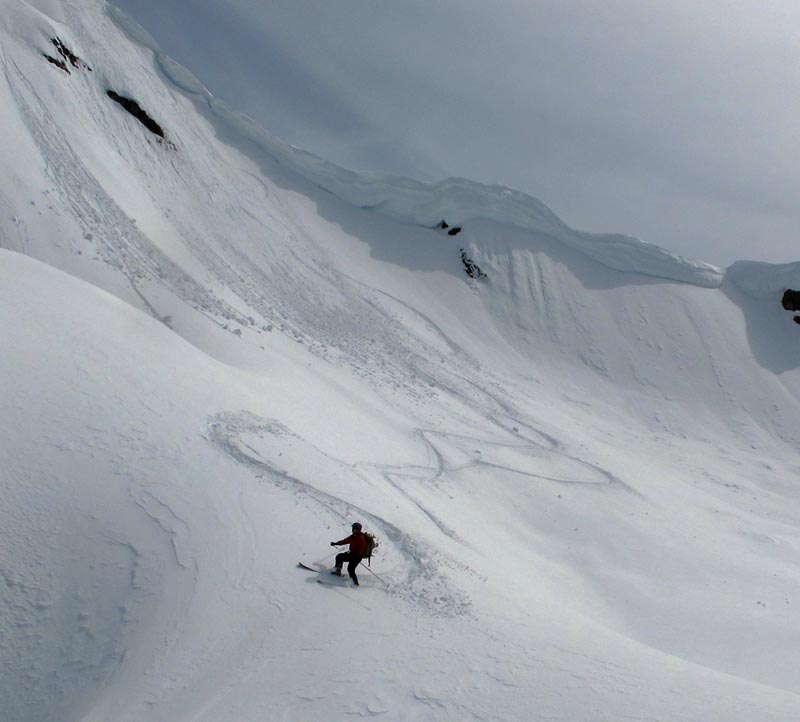 Backing off the NE couloir and figuring out another way down 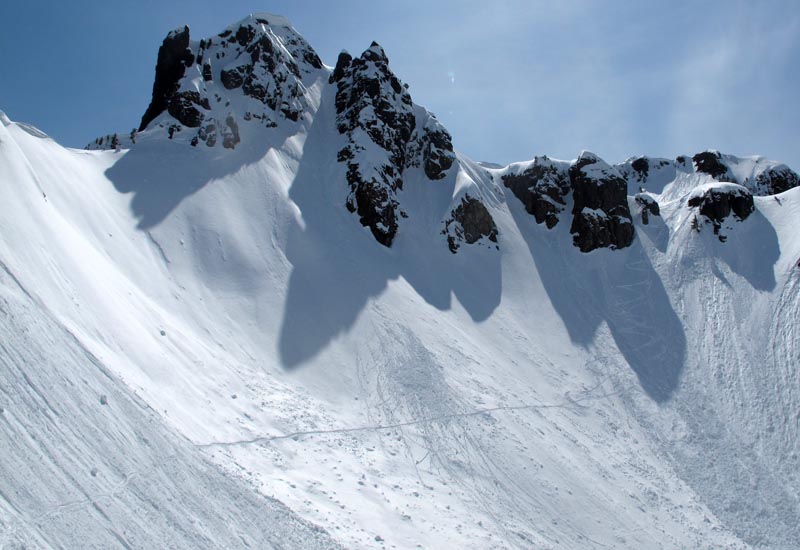 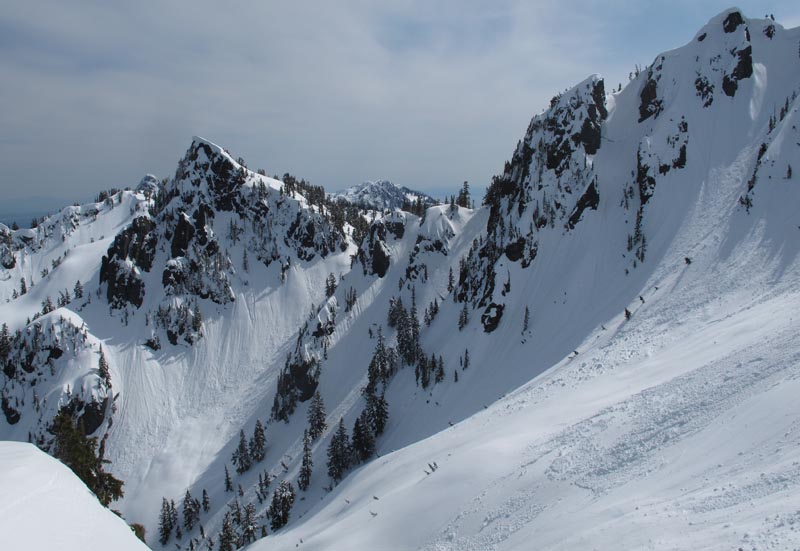 Just in case you’re curious; the traverse of certain pain to the col just east of Harvey Creek (this is the backside of the bowl between Harvey and Brunswick 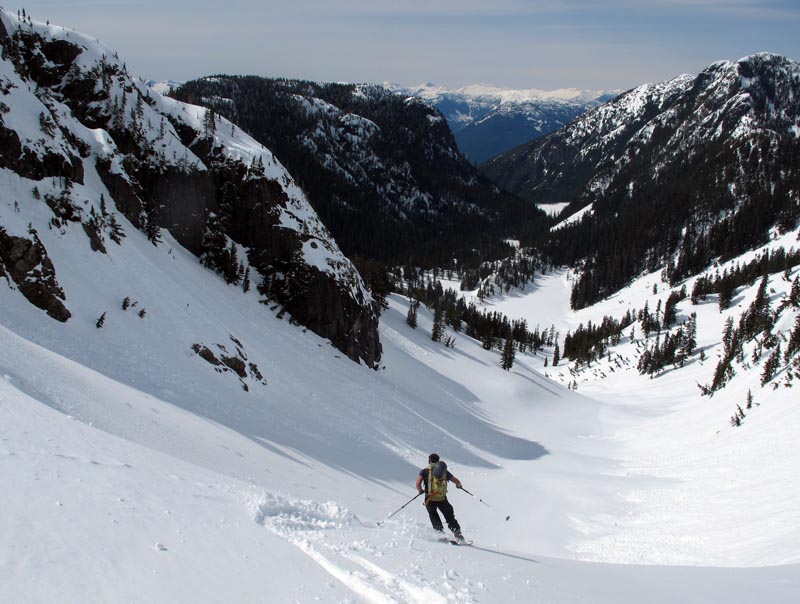 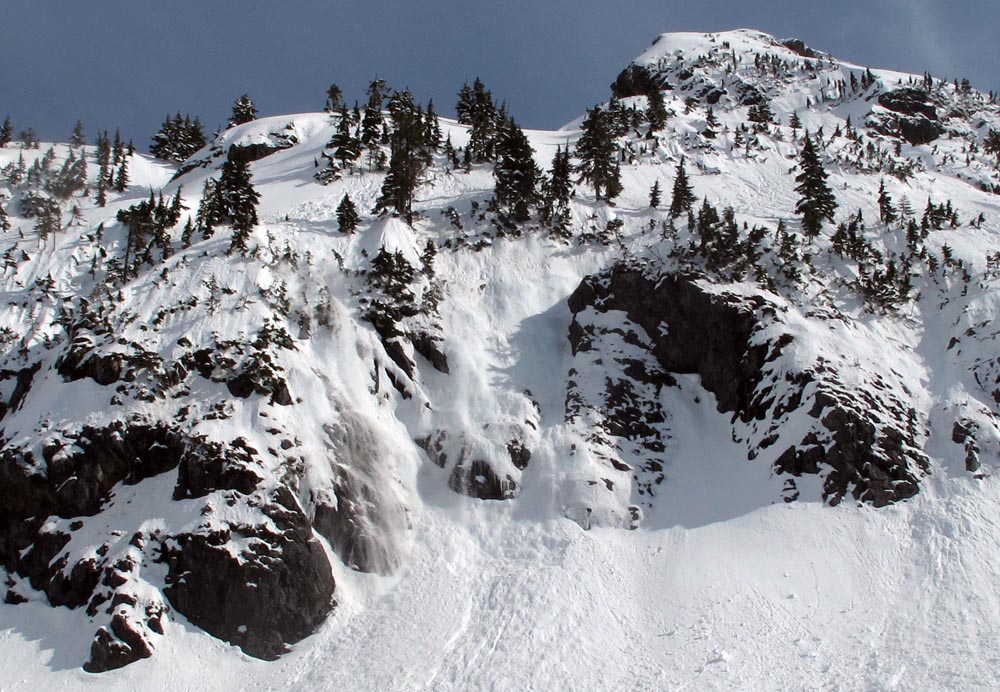 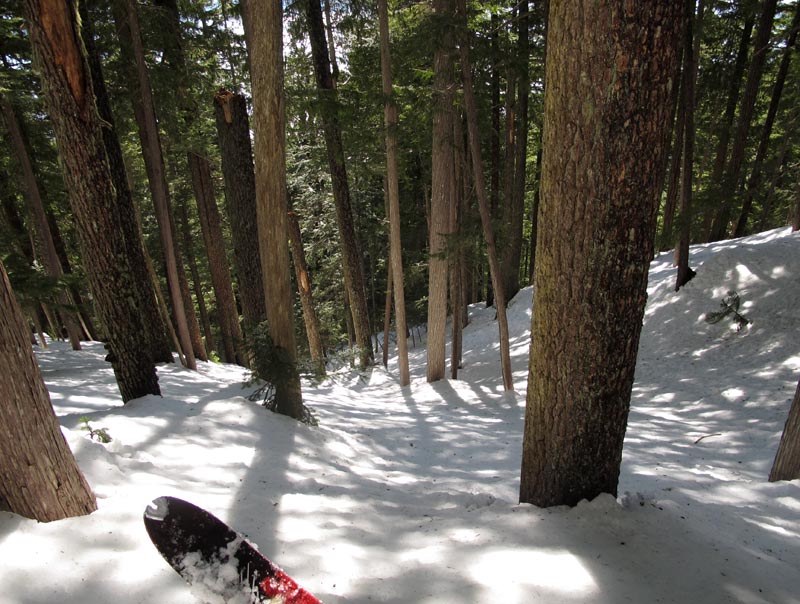 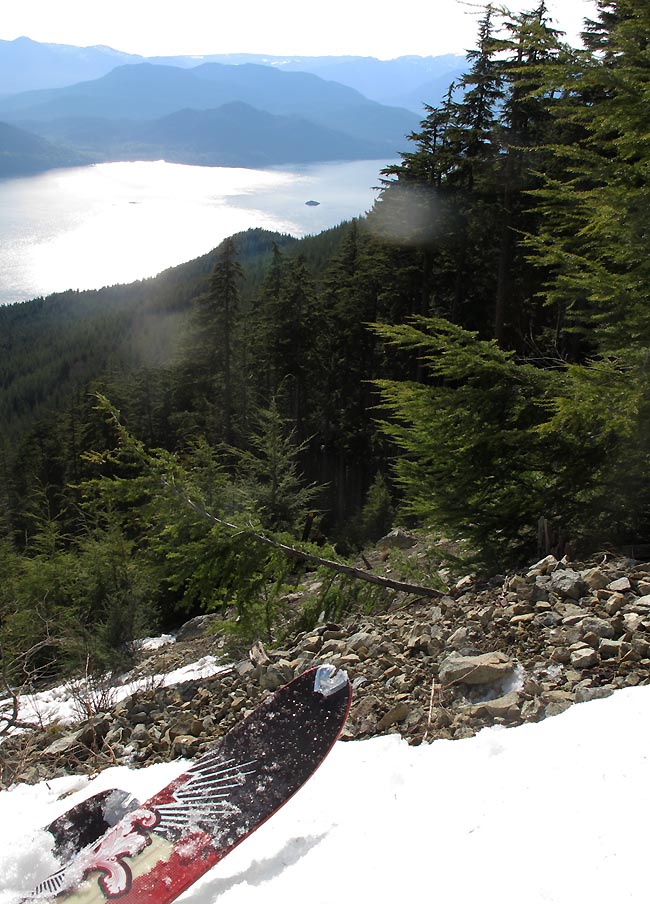 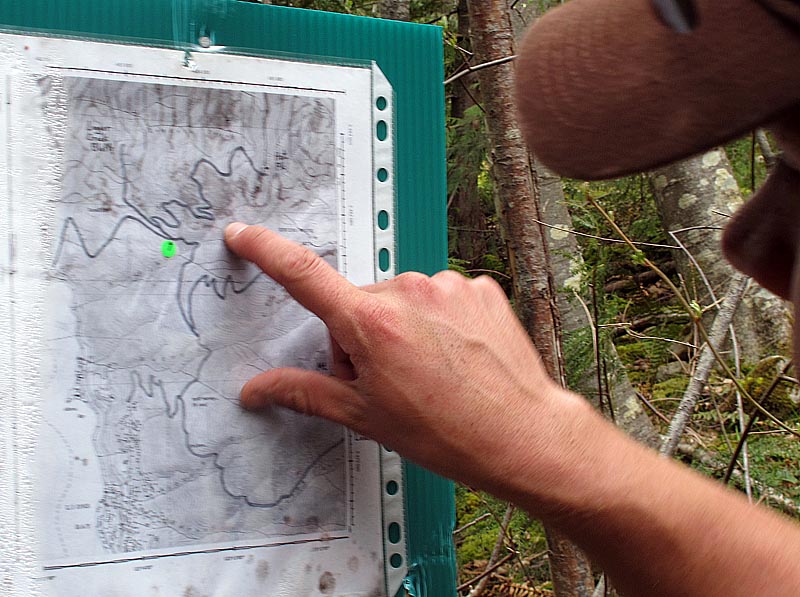 Convenient map on the trail lets us see where we went 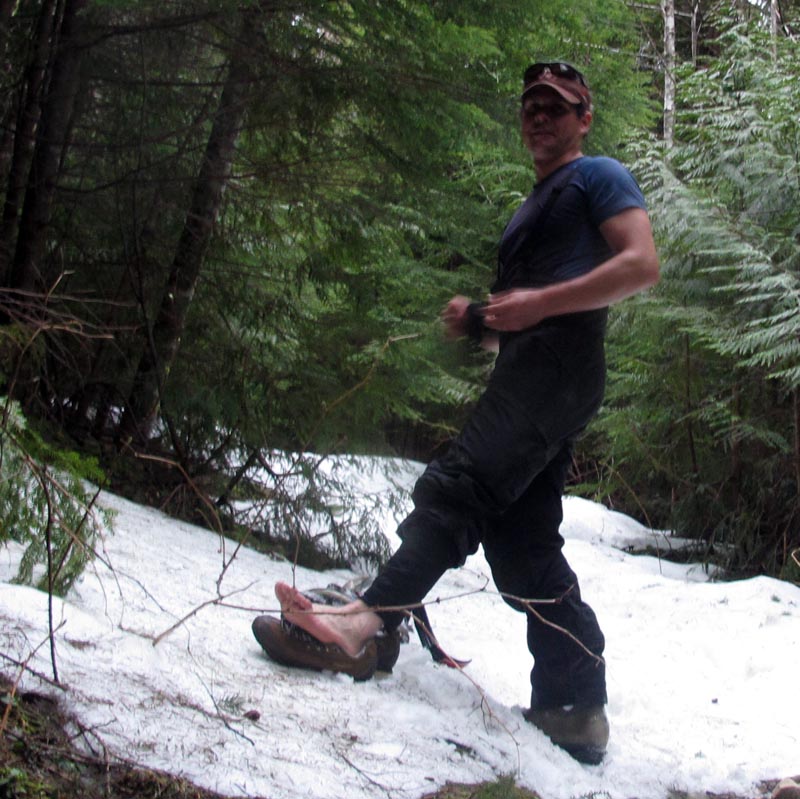 Max is stoked to change from Atomic plug boots to hikers 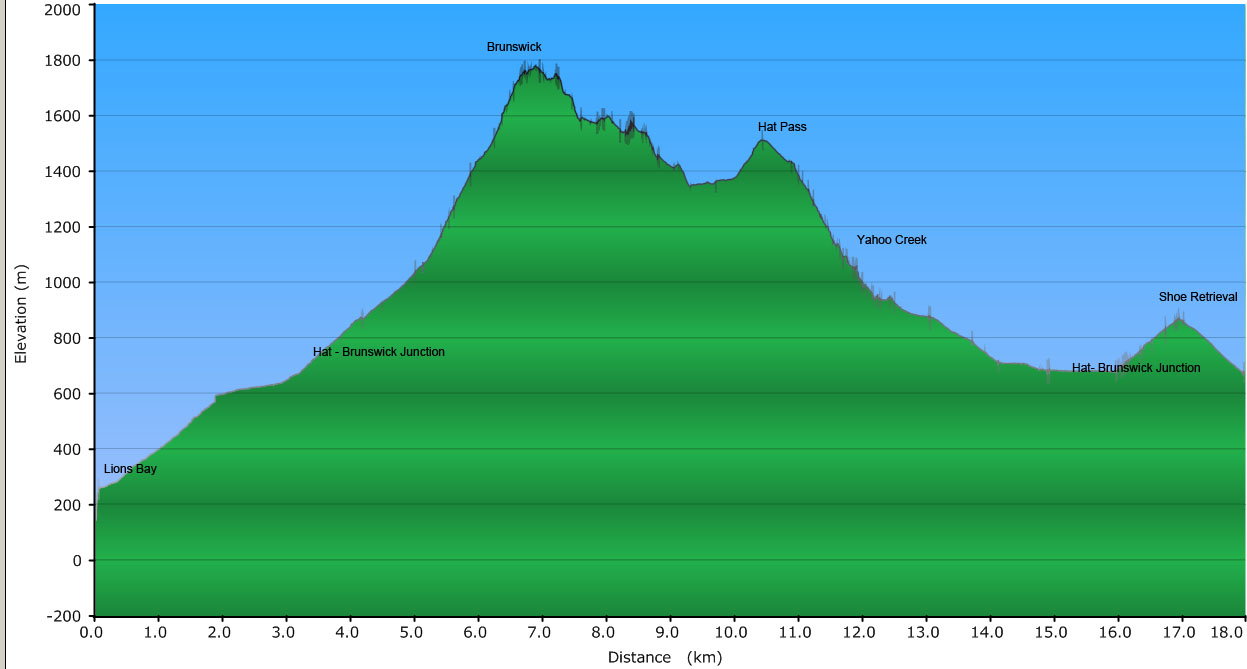 Elevation profile – last 4 km walking back down the access road is cut off as Max turned off the GPS. Its just the same as the route we came up 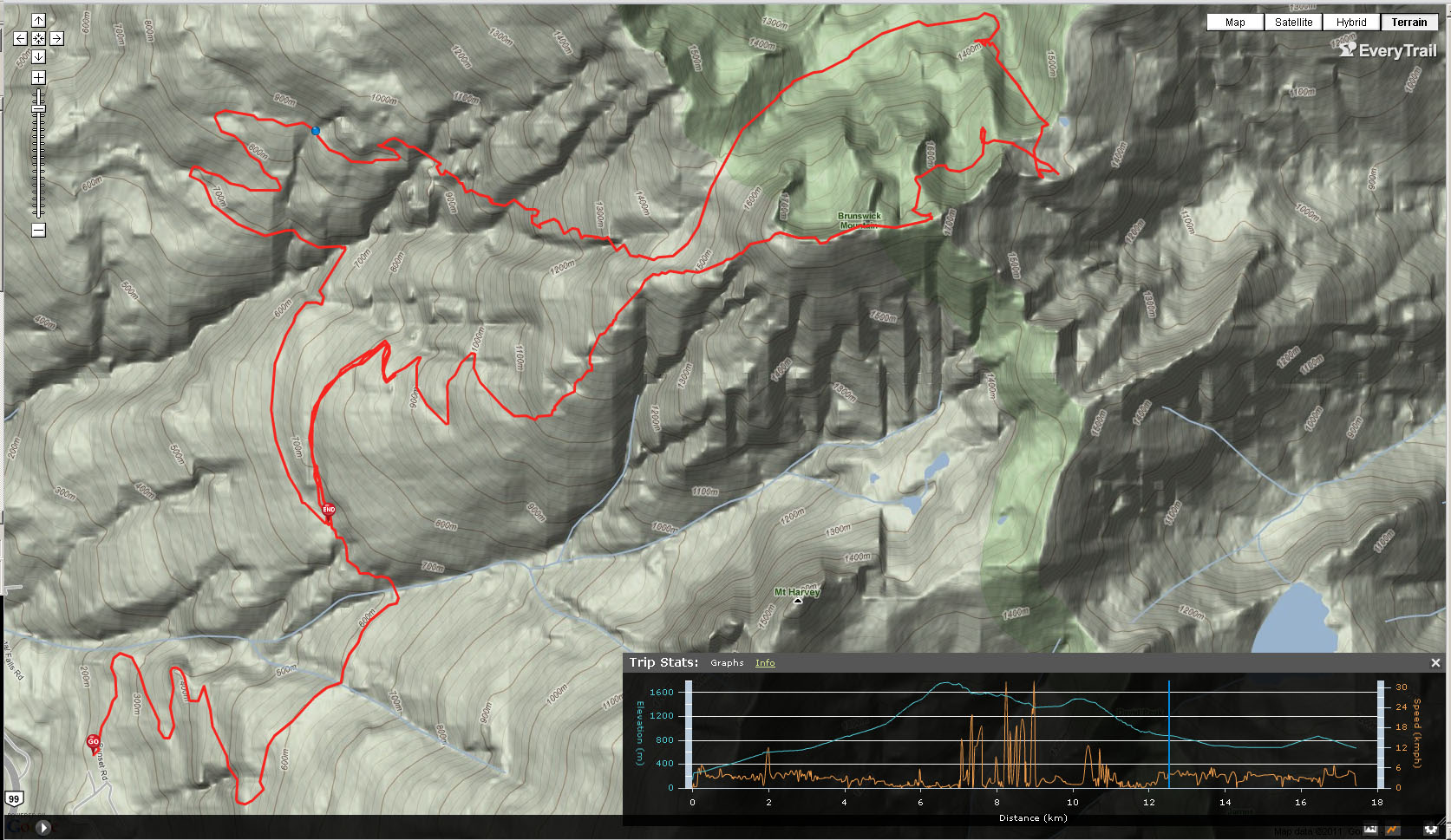 Screen shot of the Everytrail map

This entry was posted in 2011, ski and tagged brunkswick, sea to sky. Bookmark the permalink.