Clemenceau with Johnny after we left

Reconnaisance Ridge – April 11, 2005
Jonny borrowed our camera and left us some pictures of some chute-skiing on Reconnaisance Ridge. The weather and visibility goes to pot after we leave so the group is limited in possible objectives.

Here’s Ptor on top of Reconaissance Ridge contemplating a cornice entry into the chute. 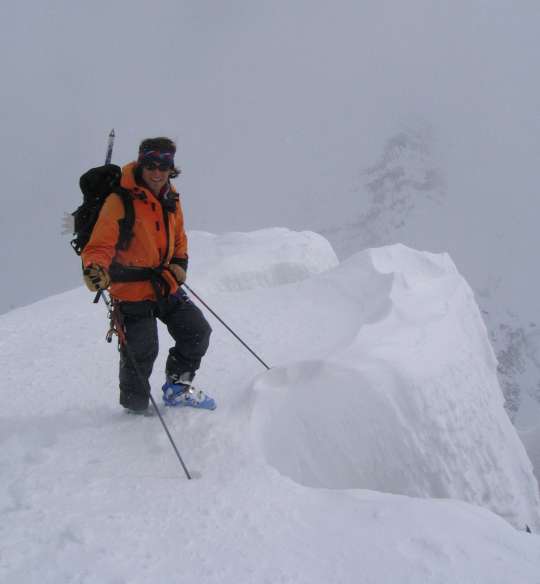 Looking into the chute down to Clemenceau Icefield. 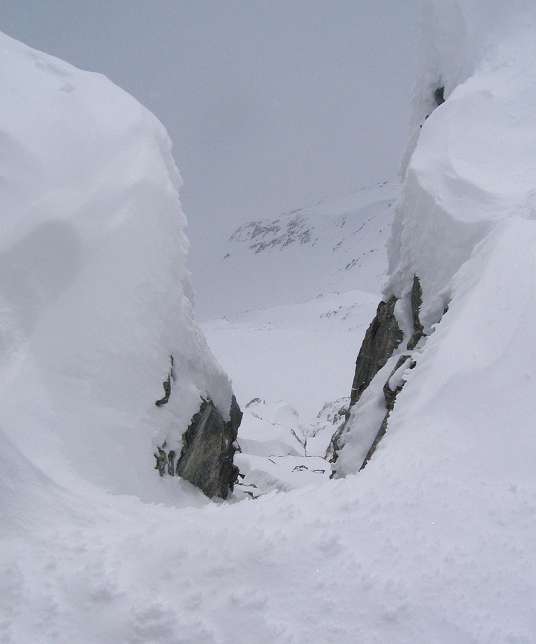 If the chute looks steep it’s because it is. Jonny goes first as test dummy and sets up out of sluff and slab way. Here comes Ptor. 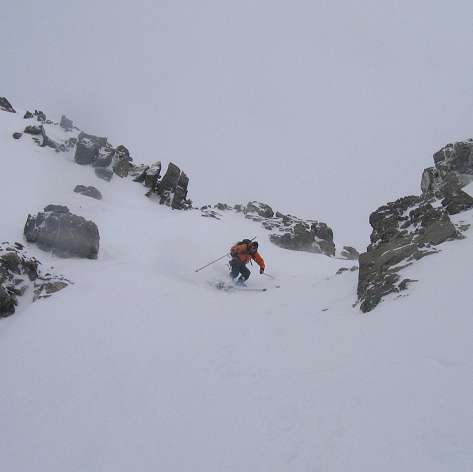 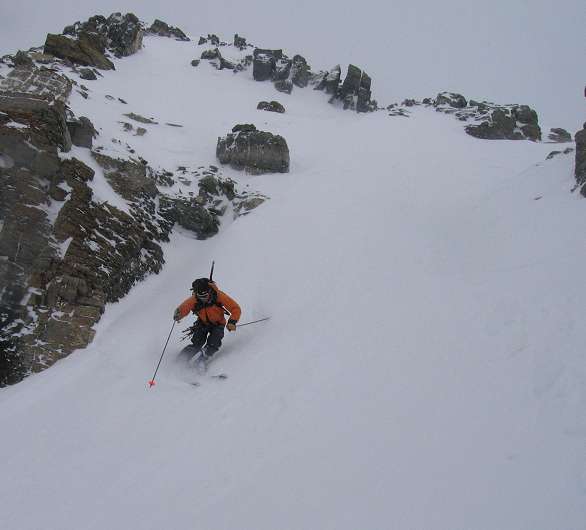 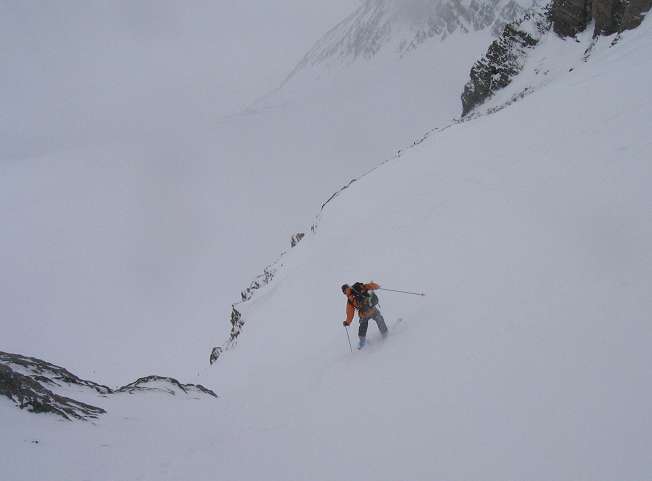 View of the chute from the base of the icefield. 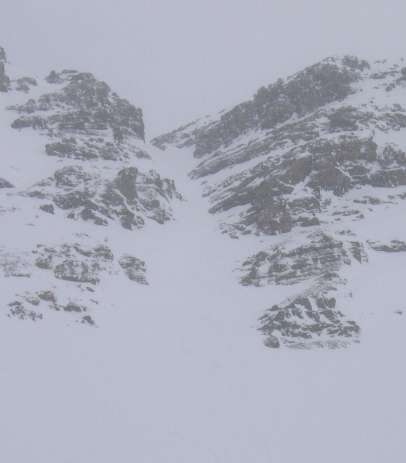 Here are Jonny’s pics of his groups’ attempt on Mt Clemenceau. The weather breaks nicely for them. This picture shows the group approaching Clemenceau and the view of its south face from the Tusk Glacier. 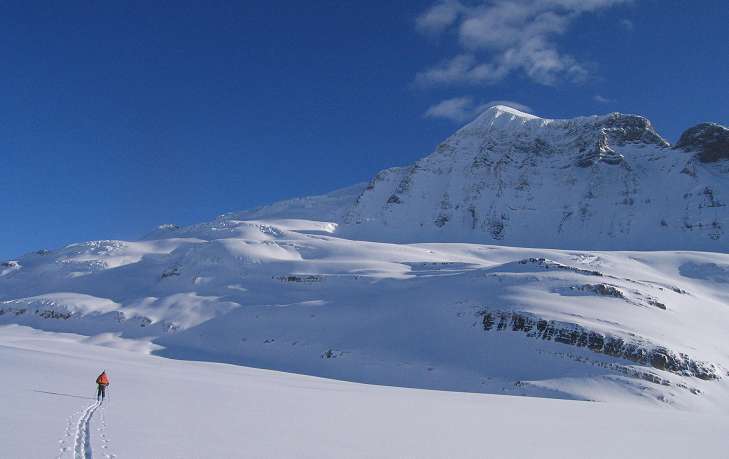 View of the base camp and Shipton’s east face. 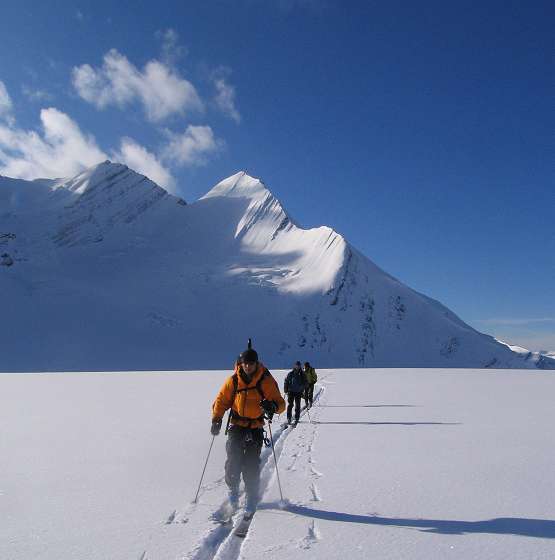 Tusk, Irvine and Shipton from the base of Clemenceau approaching the first set of bergschrund. 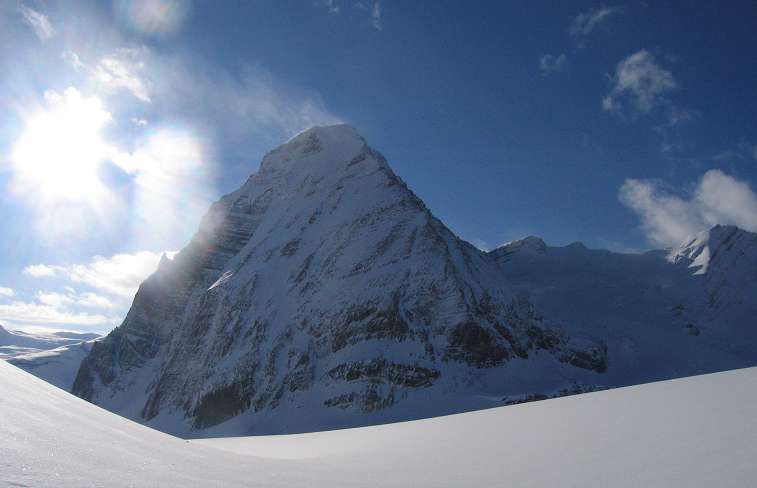 The lower slopes of Clemenceau; about 35 degrees and a little wind-scoured. 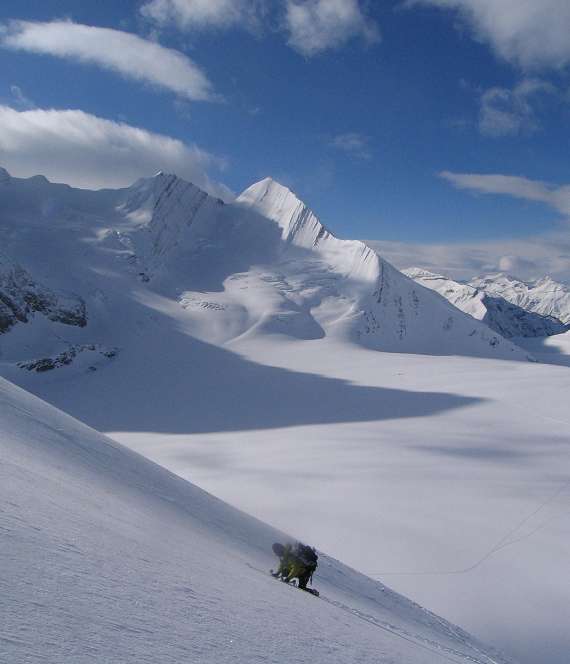 View of the Duplicate Glacier showing how impenetrably broken it looks and view of the east face of Tusk Peak from the middle slopes of Clemenceau’s south west face. 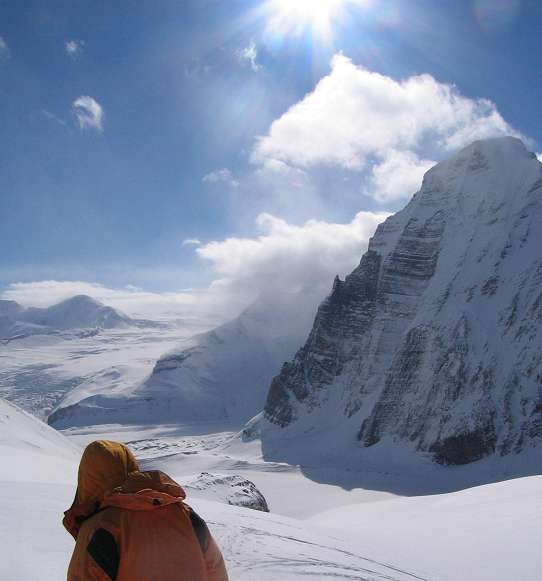 Approaching the last third of Clemenceau’s SW face. The route contours over to the west/picture right and navigates through some seracs guarding the approach to summit via the west face. 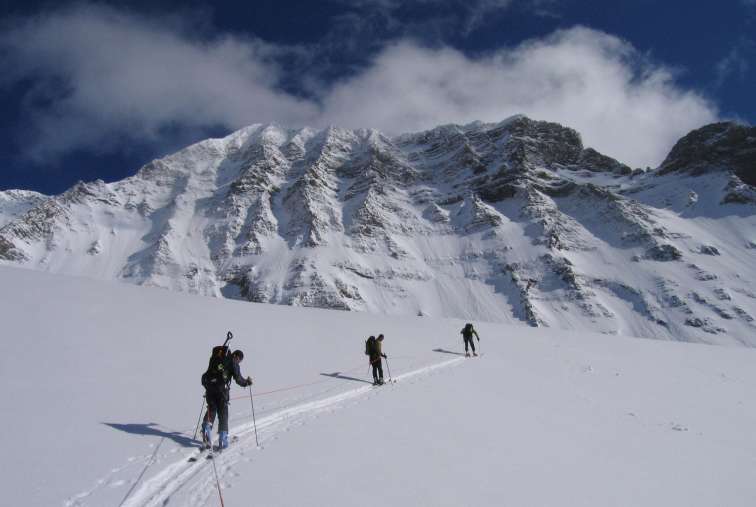 This is as close as the party gets to summit. The winds pick up and storm clouds seem to be coming in quick from the south-east. Of course, just as the group skis off the lower slopes, the weather breaks again. Typical Rockies weather.

The group then goes on to Reconaissance Ridge to ski a steep east face. Here’s a few pictures of the face after it was sliced and diced. Ptor’s line on looker’s left is a nice example of straightlining for sluff management. 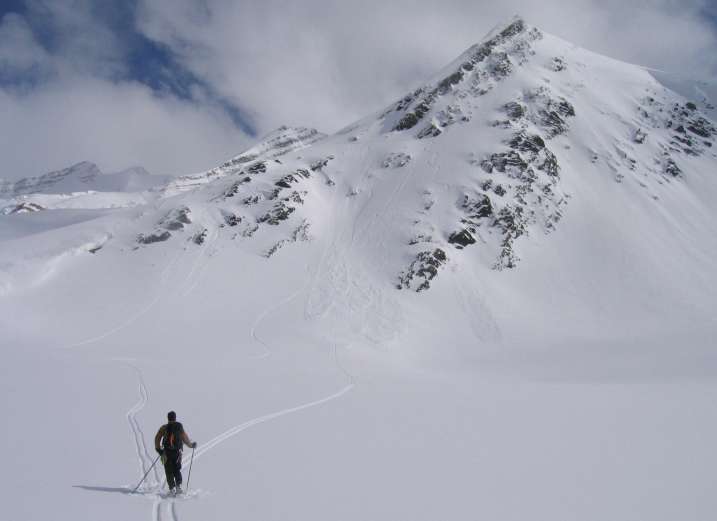 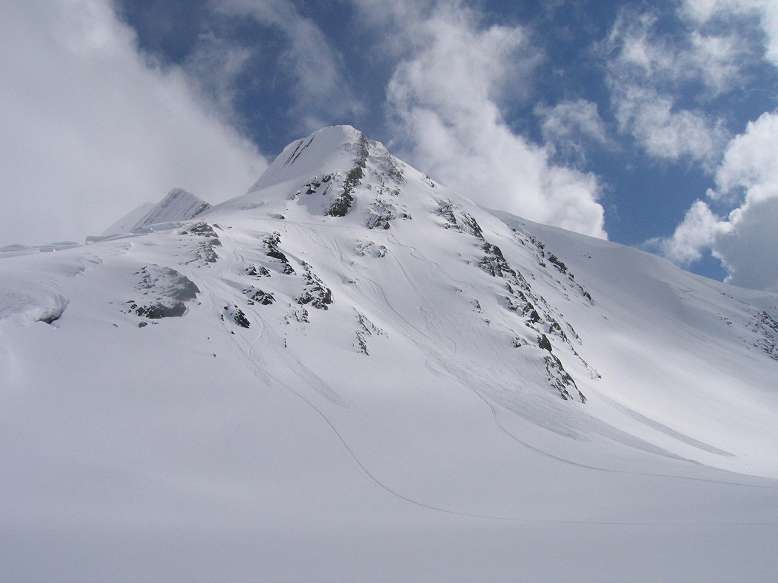 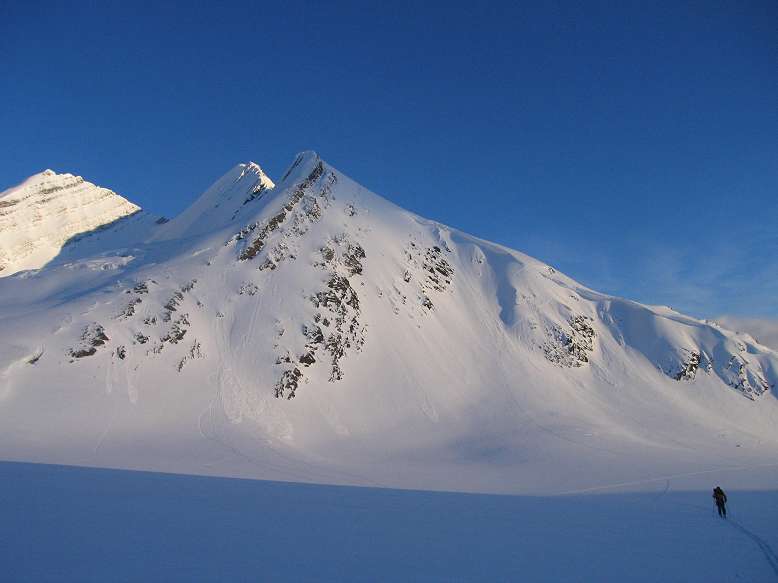 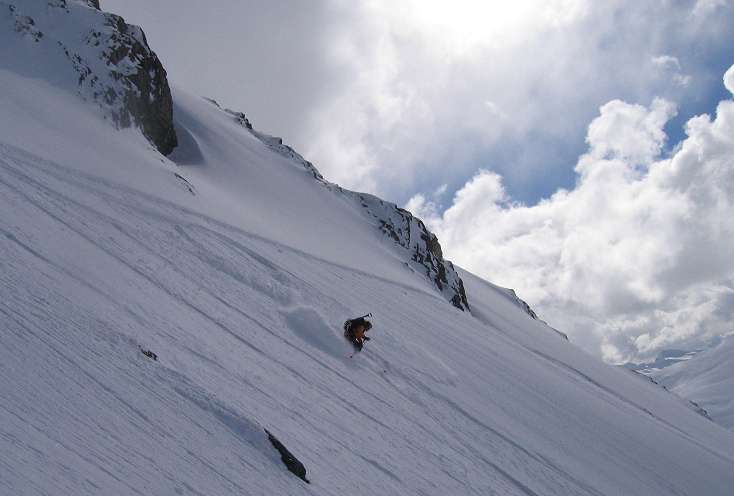 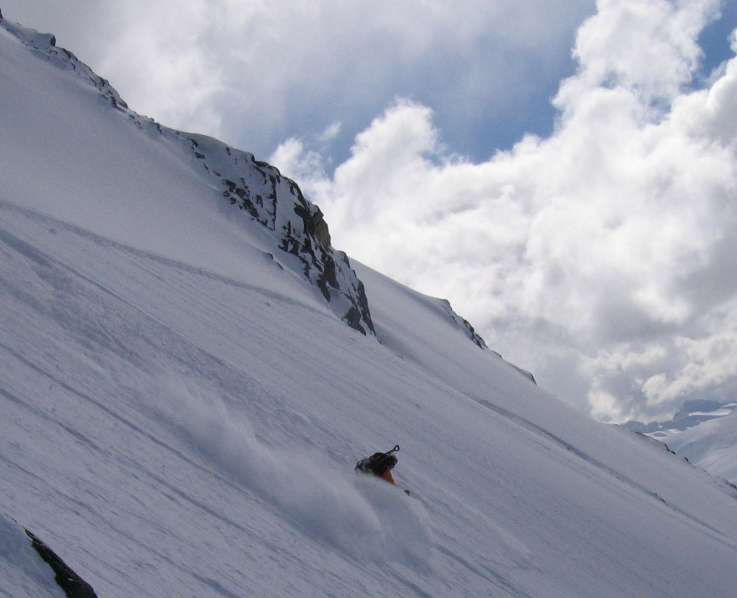 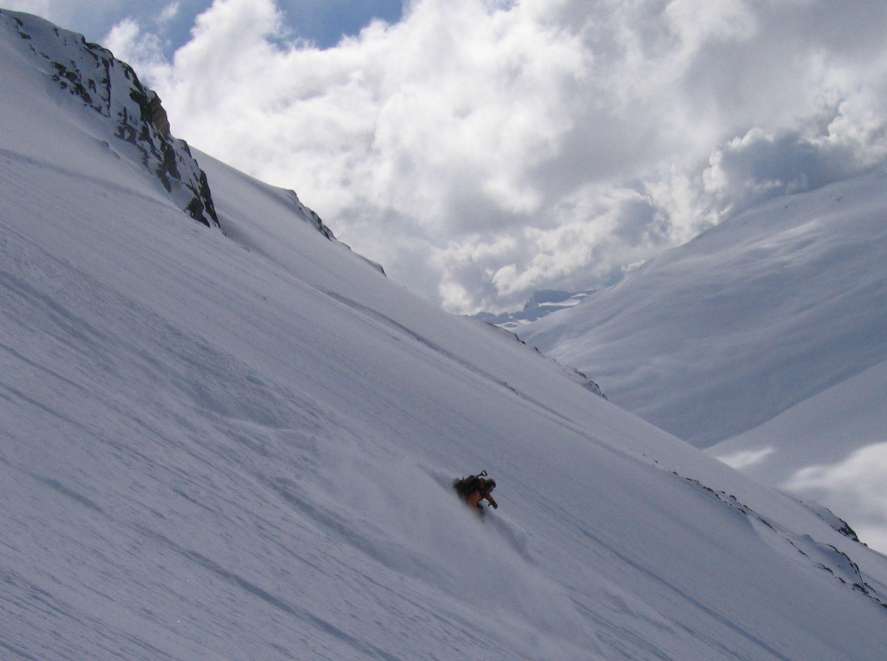 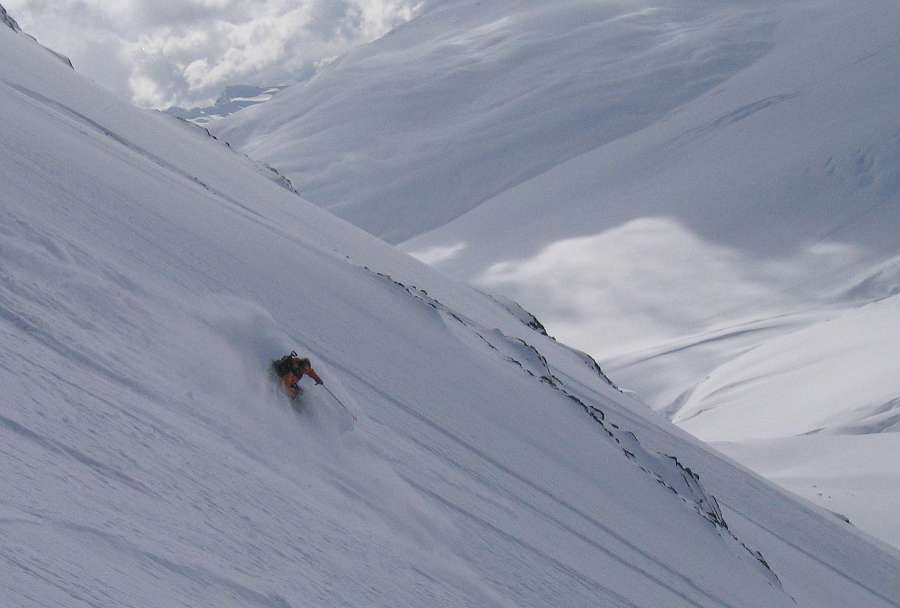 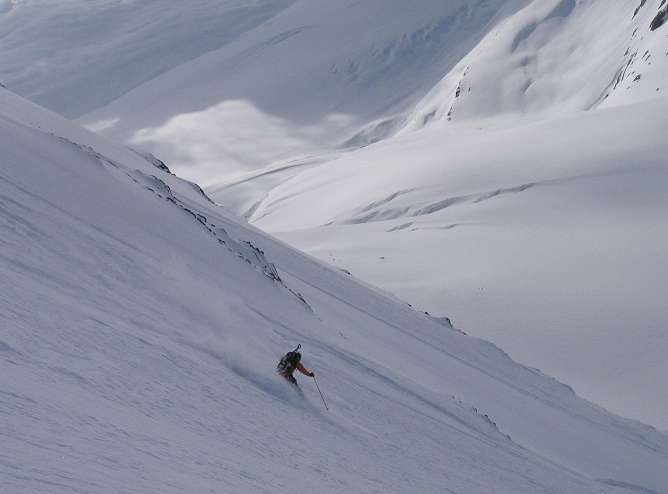 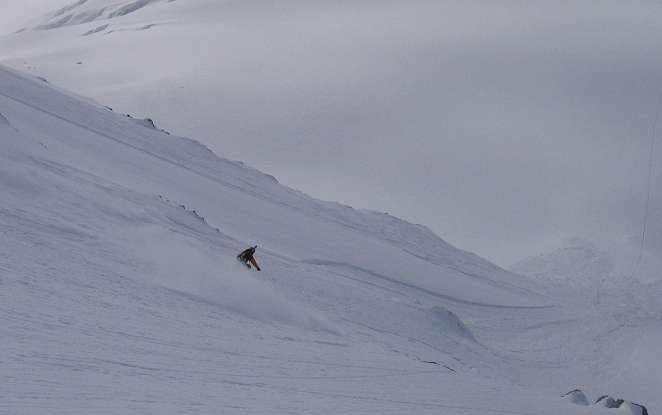 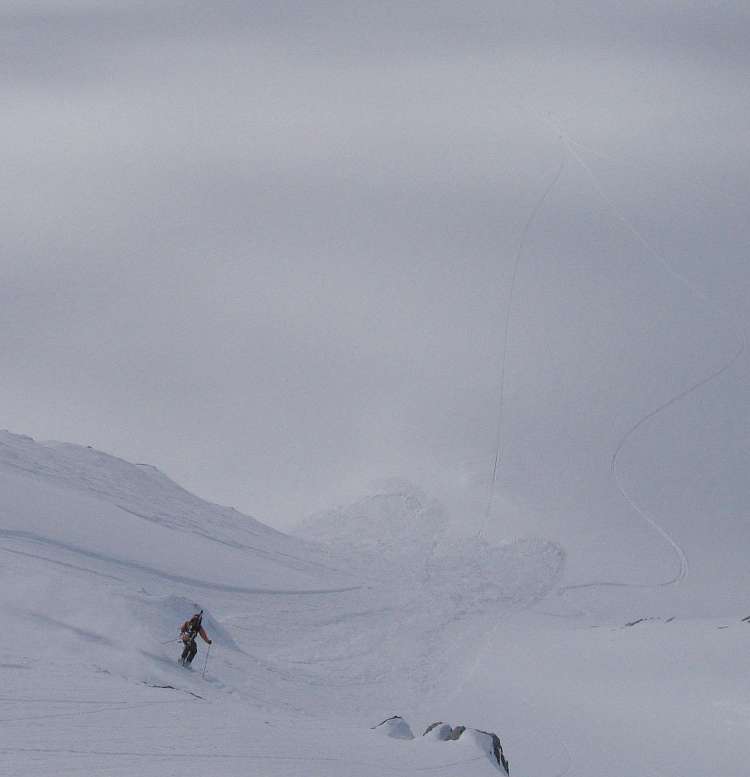 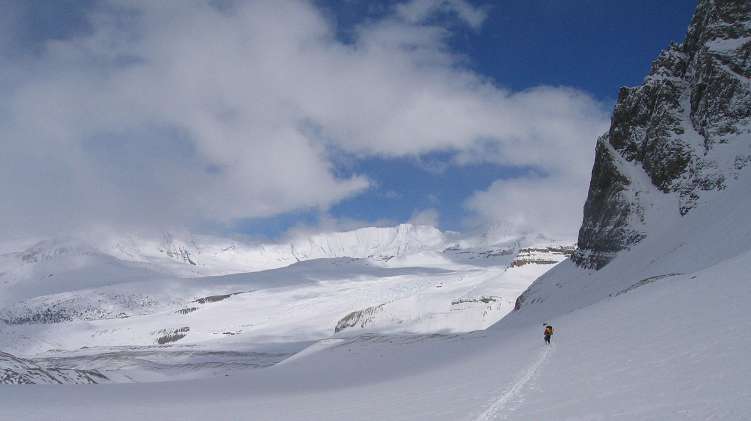 This picture shows the Duplicate Glacier to the south taken from Tusk Pass and how broken it is. I suppose that one could punch over Tusk Irvine col and descend the back (south face) of Tusk Peak to the Duplicate. Good luck with navigation though and I won’t be following in your tracks. That would be the back end (north west face) of one of the mountains on the ridge of the Shackleton Group peeking through the clouds. 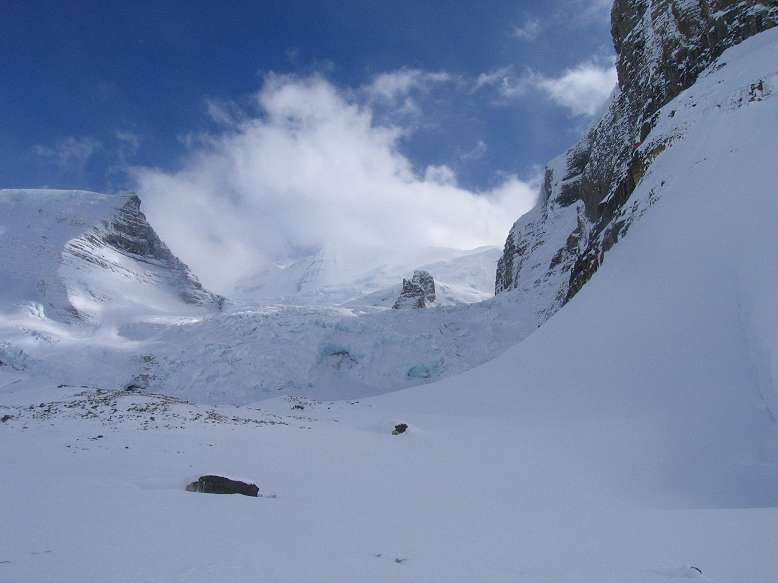 Stunning view of TuskPeak’s east face. More an ice/rock climb although I won’t doubt someone will try to ski it one day. 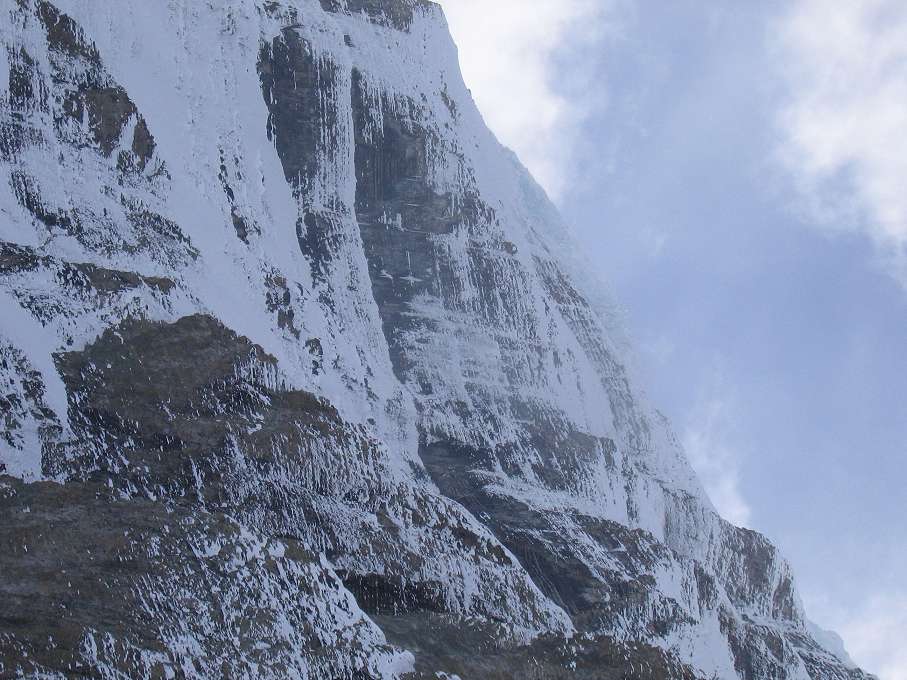 This picture shows a view of Duplicate Mountain from the north on the way to another camp at the base of Apex Mountain. Hidden partially from view are the twin peaks of Duplicate (hence the name) 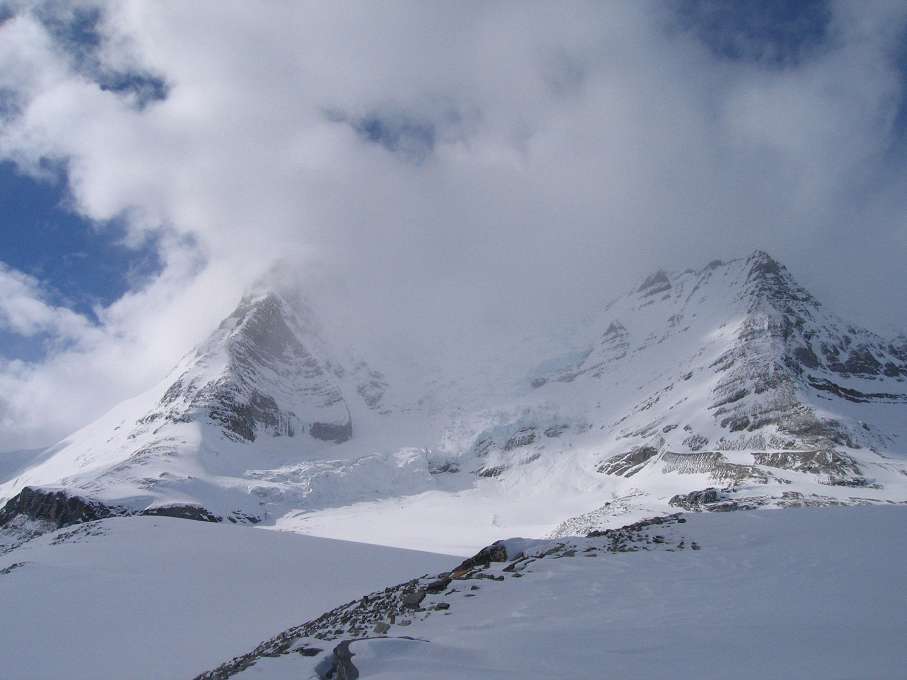 Here is a view of the east peak of Duplicate Mountain taken from the north west. 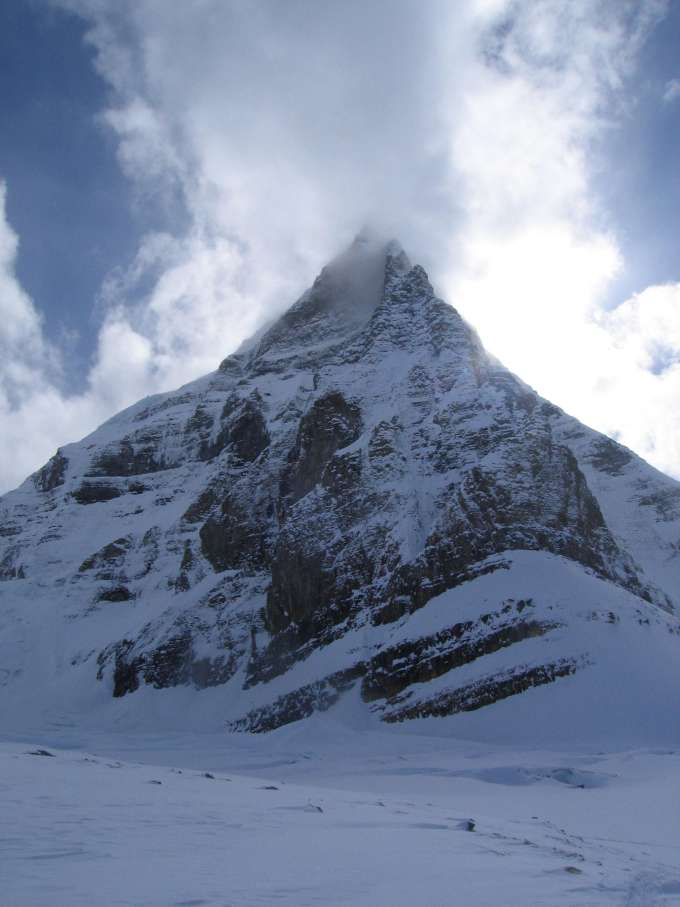 and another view of the same peak deeper into the Clemenceau Glacier heading east on a slight downslope. 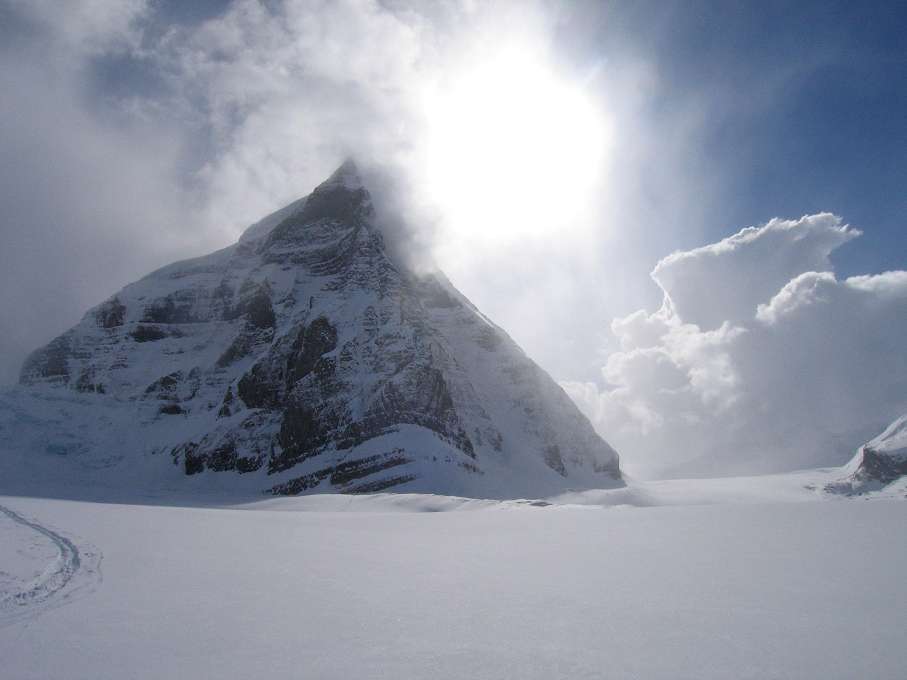 This photo shows the Shackleton Group and Mt Shackleton 3327m (centre of picture/south) from the base of Apex Mountain. The east peak of Duplicate is the peak on picture right (north) 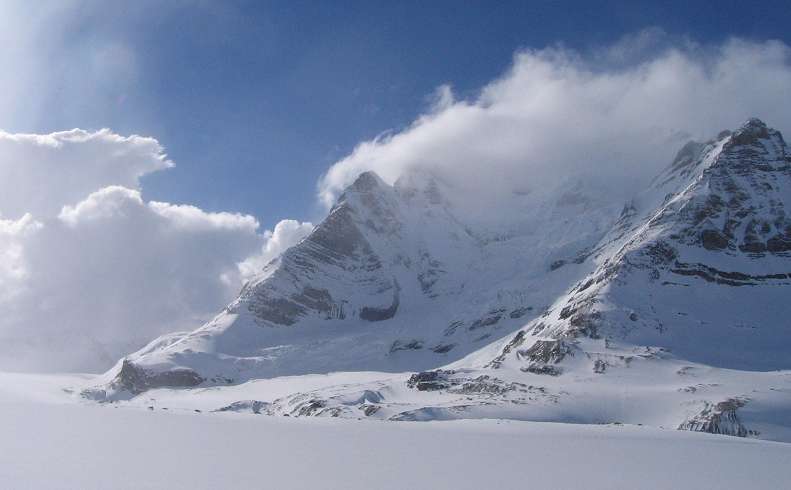 Visibility deterioates through the Chaba Icefield and doesn’t return till deep into the Columbia Icefield. The guys run low on food so no summits of Andromeda, Columbia or Snow Cap to be had I guess. Here’s a nice picture of some seracs taking a tumble on some un-named ridge on the Columbia. By the fact that my camera makes it back intact I’m guessing none of the guys were near it. 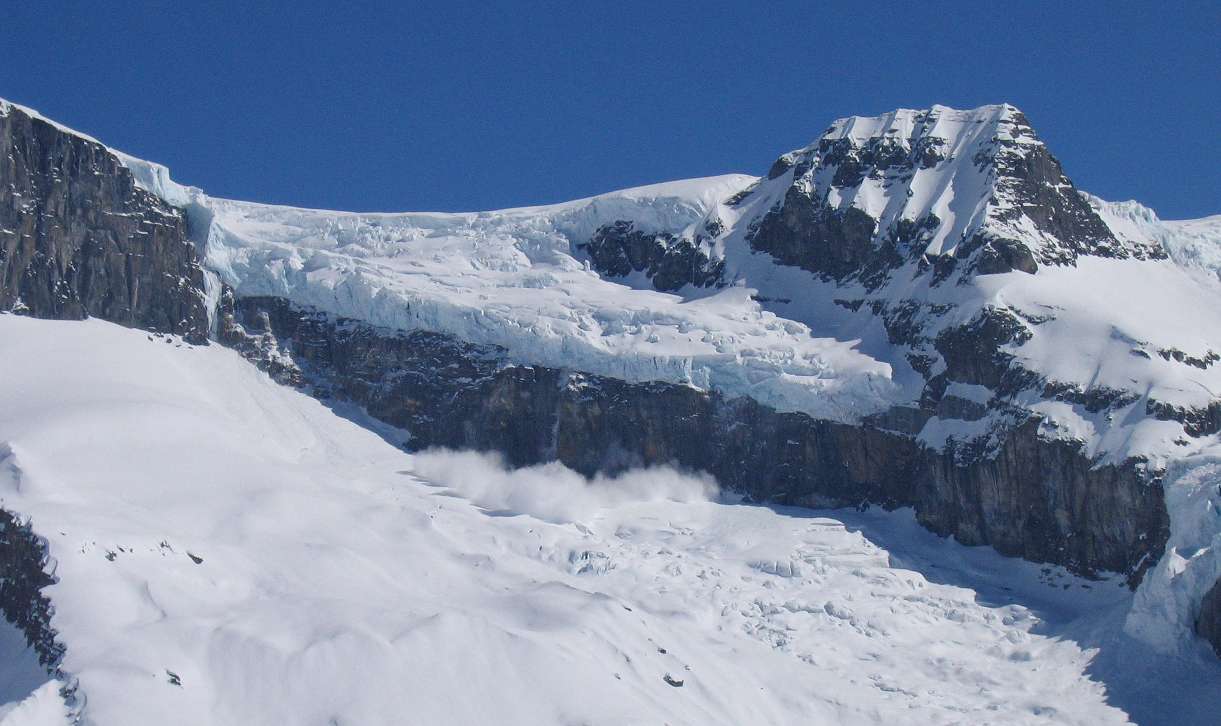 This entry was posted in 2005, ski and tagged Clemenceau, johnny, rockies. Bookmark the permalink.