Today sees us making the trek “beyond Hope” and up the Coquihalla area to Zoa Peak just shy of the toll gates on B.C’s Coquihalla highway 5. We arrive to a packed scene of cars parked and sledders scrambling for spots to unload snowmobiles. The Zoa/Thar area is a popular spot but this was unusually busy. Later we found out that an avalanche class and a school trip were also there.

Note that this is a popular summer hike as well. 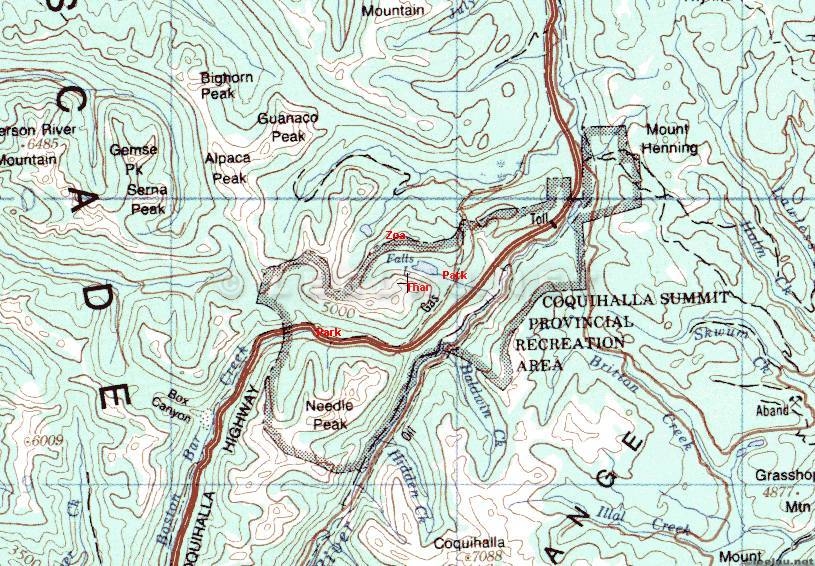 It’s a warm day; sunny  and clear. The temperature is already close to freezing at 9 am when we start and we’re quickly shedding clothes on the skin-up. From left, here are Andrew, Sharon and Colin with the mountains to the south west on the other side of the highway in the background. 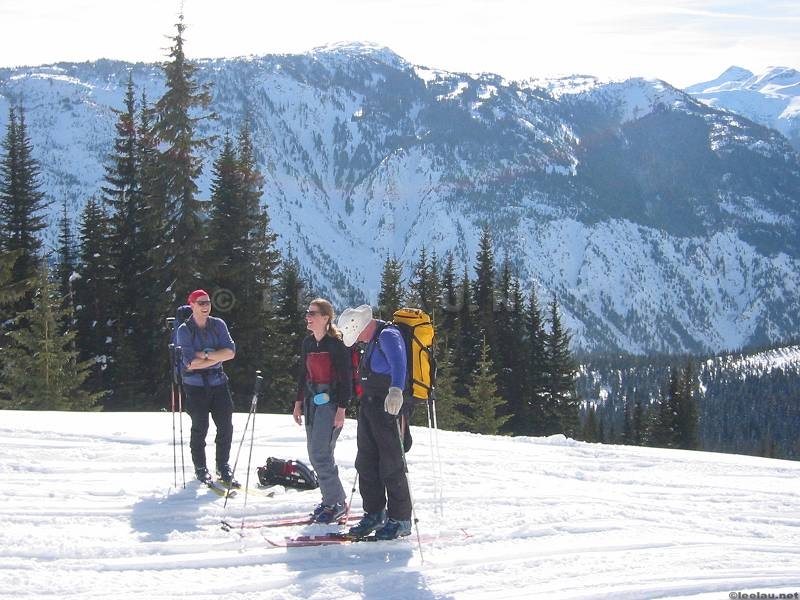 Ryanne skinning up with Mt Thar in the background. That face of Thar is often blasted with avvy bombs to curtail highway slide hazards. Not today though as that face has seen 4 days of sun and is probably fairly stable. In between avvy cycles, that face is fun skiing. As the sun and cold nights have baked this access road and the snowmobile tracks on it into a crusty layer, we’re eager to cut into the trees, find some shades and gain the skiable north-facing slopes As soon as we’re past the trees and gain a little altitude, the snow loses its crust. The skiing will be good and Andrew smiles in anticipation. The main skiable faces in Zoa are on a ridgeline jutting to the southwest from Zoa Peak. Several north to north-west facing slopes are arranged along that ridge. Sharon drops into the first slope. Looks nice! 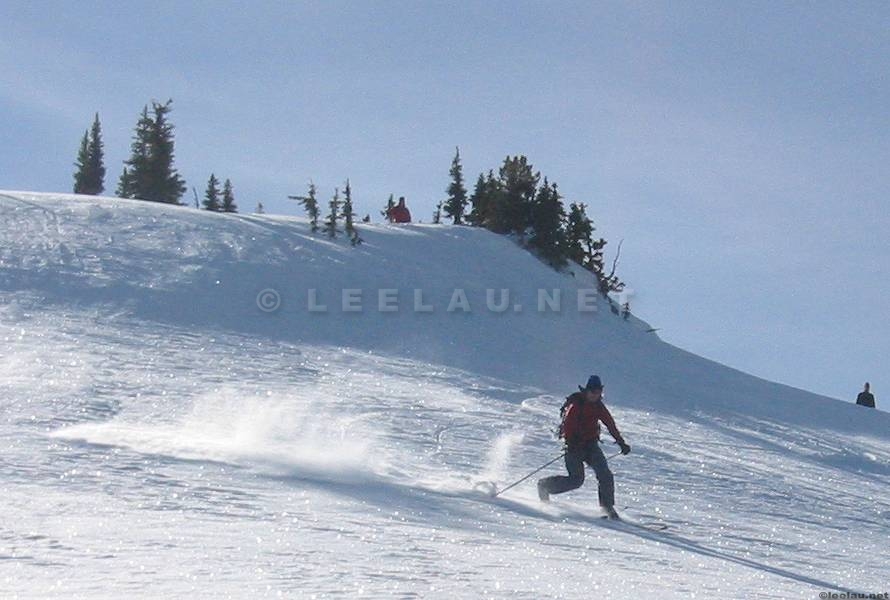 Colin drops into that same slope – viewed from a different angle and then Andrew takes a turn. That boy sure can make those boards sing! 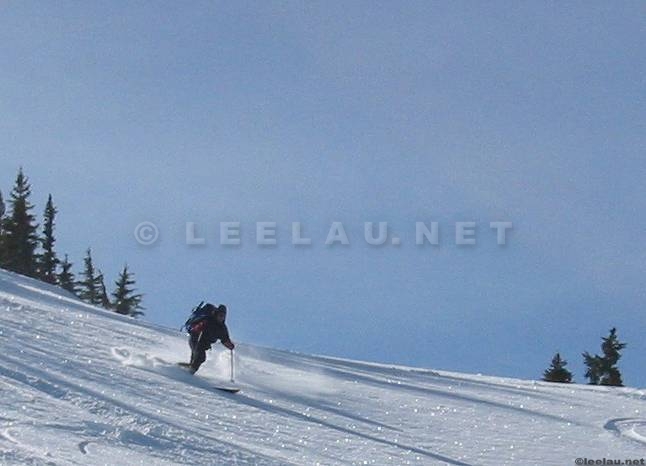 Sharon on the second part of the slope; gotta love the tip drag powder effect. 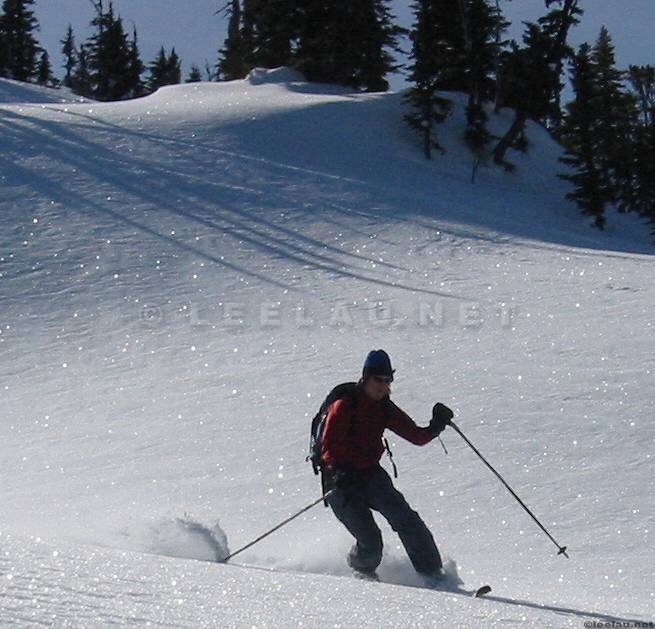 Sharon drops into this natural half-pipe. Andrew follows. He skis a little too fast for me to get more than a few pictures of him. Unfortunately the snow’s only boot top deep due to consolidation but we can’t have it all. 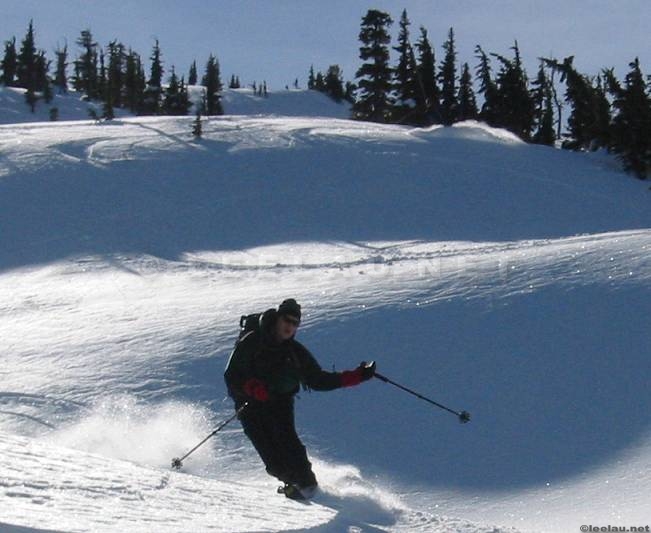 Andrew also dropping into the pipe. I haven’t skied with Ryanne in a couple of years. She’s become a strong skier. 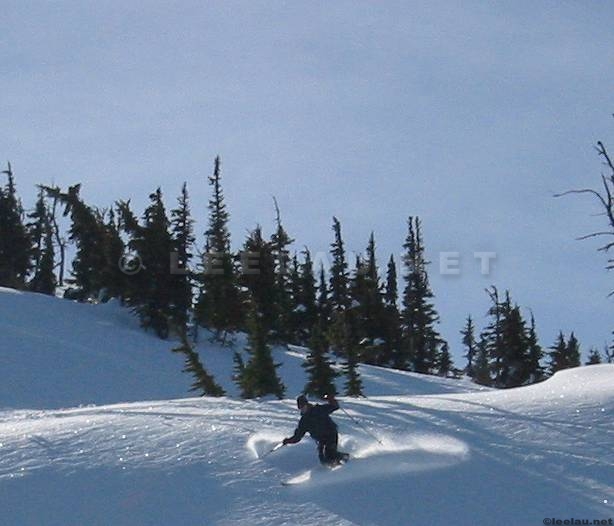 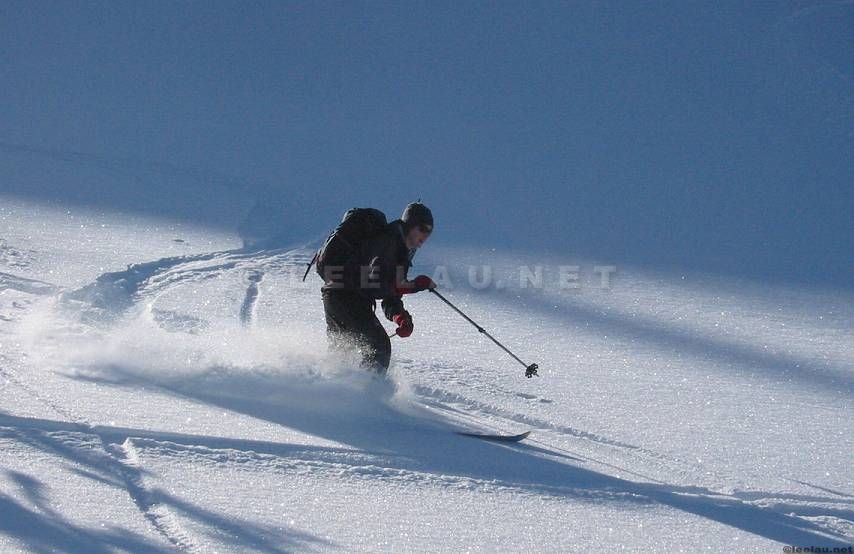 Me coming down the same slope 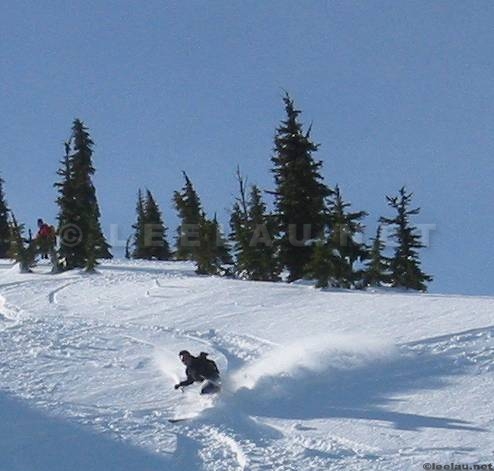 followed by Colin who somehow, manages to always find the fluffiest lightest patches of snow 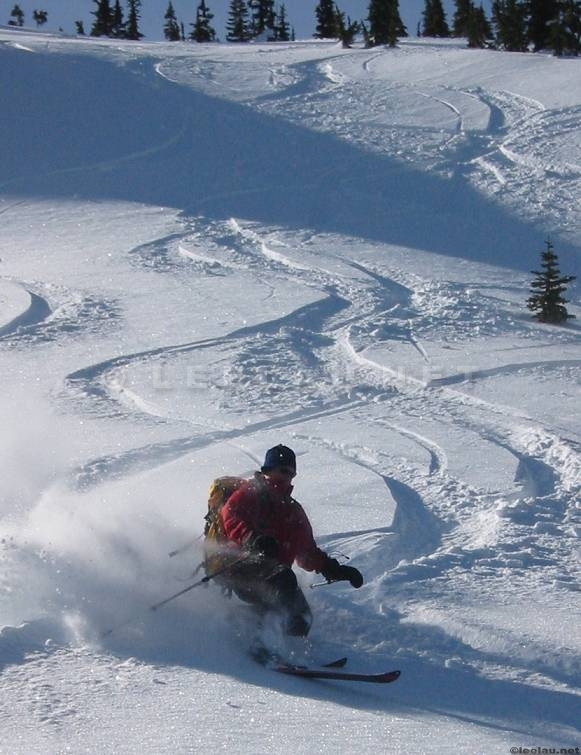 Lunch is served with a healthy portion of Beautiful British Columbia scenery taking in the northern arm of Zopkios Ridge to the right of the picture all the way down the Coquihalla.

After taking a well-deserved lunch break here comes Sharon down our second run. 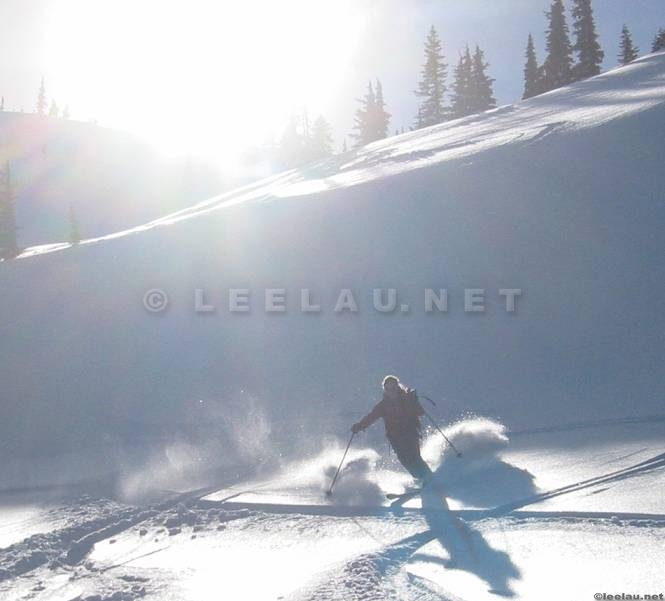 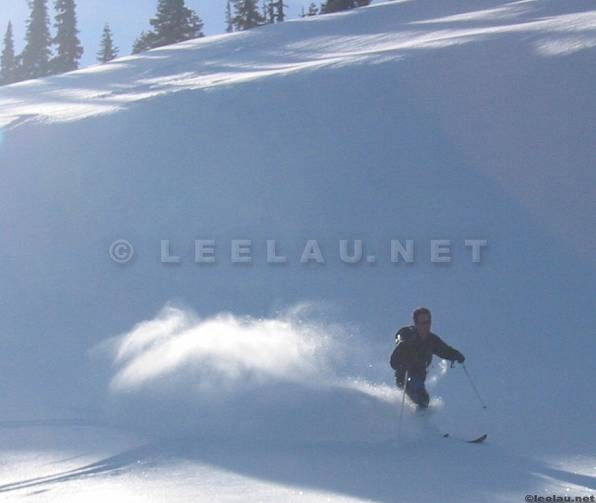 and then a skin up again for our third run 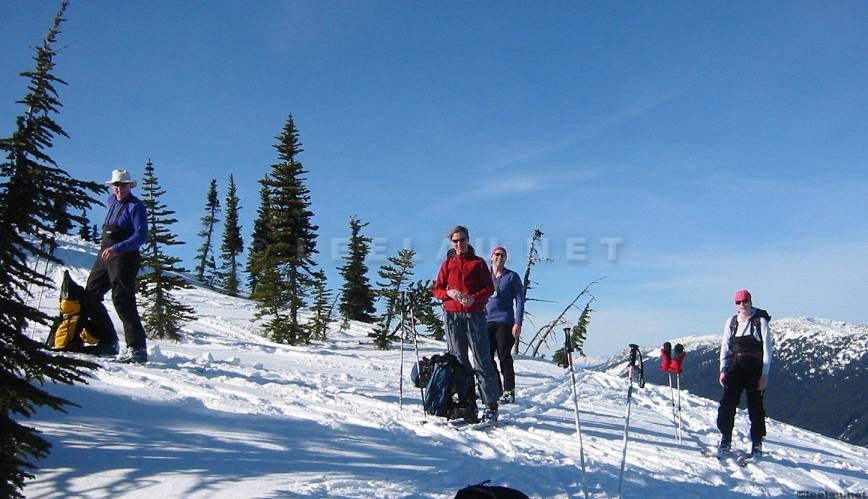 The third run is the best and I managed to get no good shots as its all on a north – facing slope that has no sun. However, take it from me, that the snow was sugary ego-boosting consistency soft and light. It had seen very little sun, if any at all.

The ski-out on the snowmobile-tracked road was interesting to say the least. Some parts almost feel like they were groomed but some parts felt like land-mines had been planted at random intervals. Here Andrew shows how a good skier makes short work of challenging terrain. and with this view of Yak Peak to bid you adieu off we are to the Home Restaurant in Hope for some well-deserved grease. 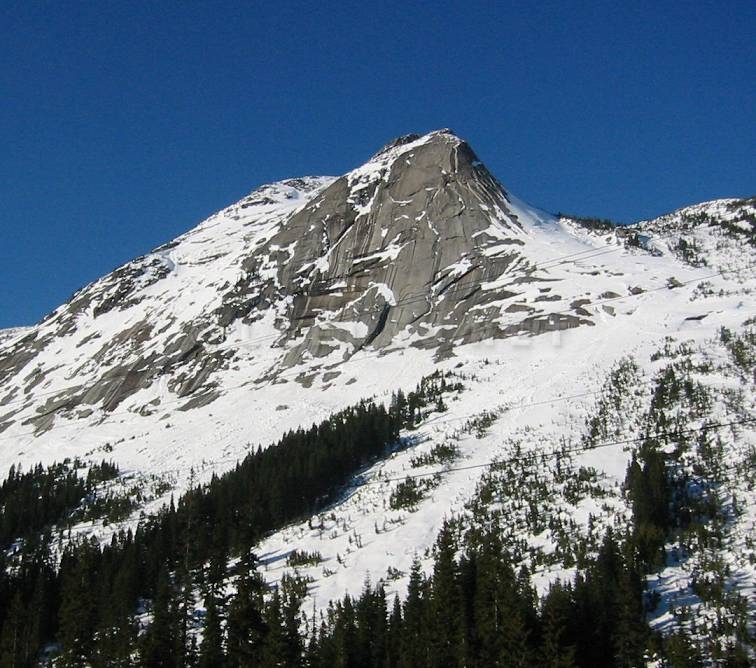 This entry was posted in 2004, ski and tagged coquihalla, zoa. Bookmark the permalink.