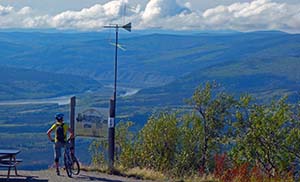 The Yukon has an allure that draws you back.. It drew people here over 100 years ago in the search for filthy lucre in the form of Yellow Gold. Now a new gold has been discovered; one that doesn’t “turn the minds of men” and constantly refreshes. It’s the golden natural dirt coveted by mountain bikers the world over. It’s that allure of sweet single track that draws you in and keeps you coming back. Added to this draw is the seemingly limitless empty wilderness of Dawson City in the Northern Yukon. Then sprinkle in the natural beauty surrounding Dawson City to the whole mix.

The timing of our trip in late summer was to coincide with what we think is some of the best conditions in which to experience Northern Canada. Nights are colder so bugs die. Tundra and northern boreal forest colours explode into iridescent yellow, orange and red. Trails get a bit of moisture so are nice and tacky. Days are warm (but not sweltering). 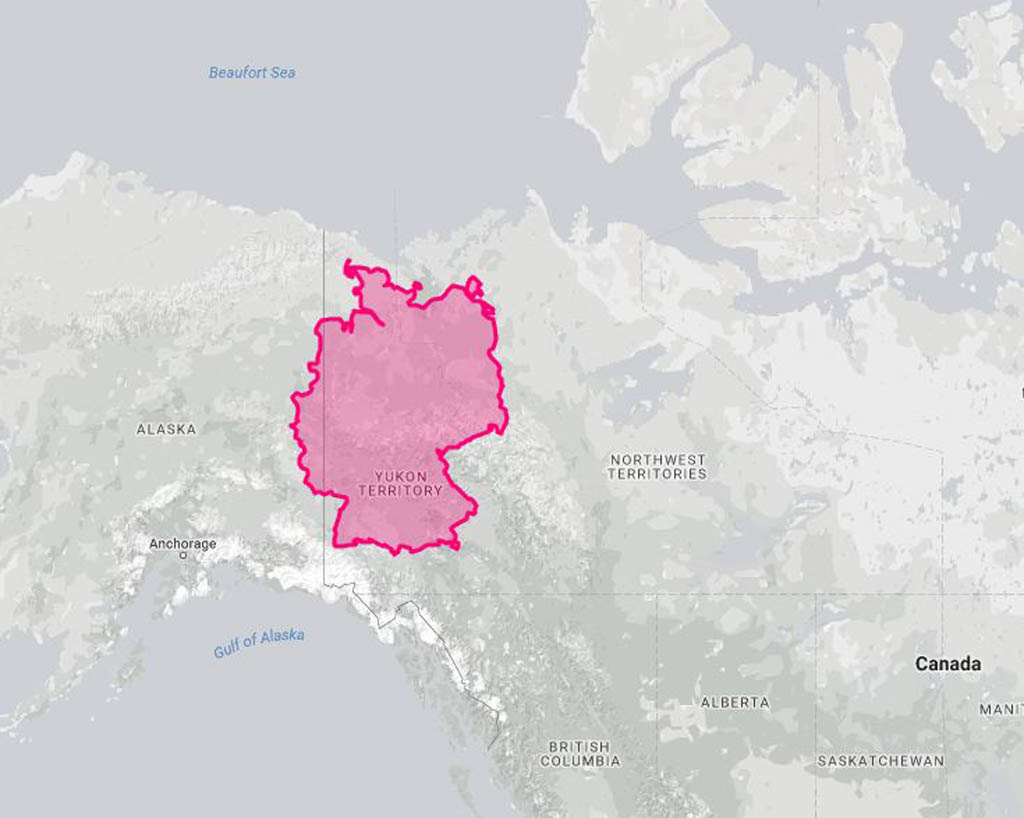 The Yukon’s total population is 34,000 people. Germany is 20% smaller and has 83 million people 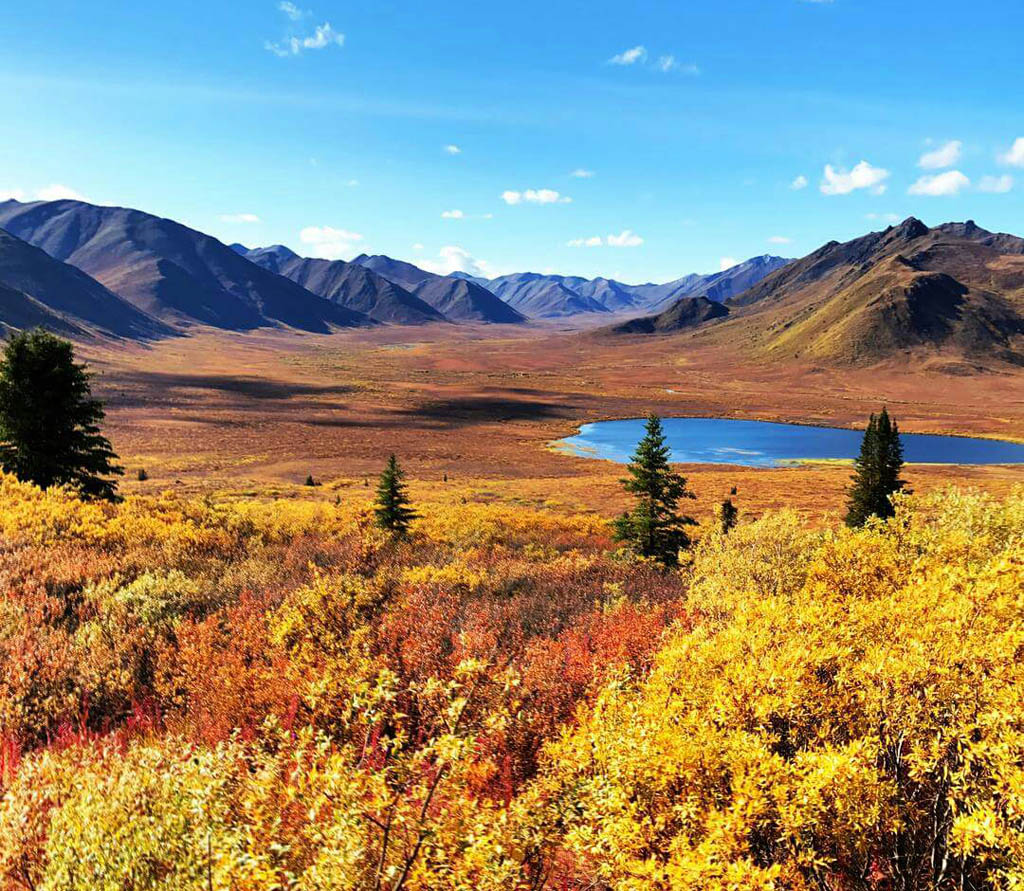 We were last in the Yukon in 2013 when we drove up from Vancouver via Vancouver Island and BC Ferry’s matchless Inside Passage Ferry. Then we progressed further north via B.C.’s isolated Stewart-Cassiar highway onward to Dawson City, and the Dempster Highway; finding some unique places to ride and explore near the Arctic Circle. This total trip clocked in over 12,000 kms.

We’ve been drawn back to find more of Northern Canada’s natural raw trails and wilderness experiences but perhaps with a bit less driving. On this trip we flew on Air North from Vancouver to Dawson with our bikes. Air North has virtually no check-in lineups, treats you well (warm COOKIES onflight!); doesn’t overcharge for bikes and is the way to go for trips up North. Our goal this trip was to sample the bike trails of Dawson City, most of which are centred on the main relief of Dawson’s Midnight Dome; a 550m prominence that looms over Dawson topping out at 880m 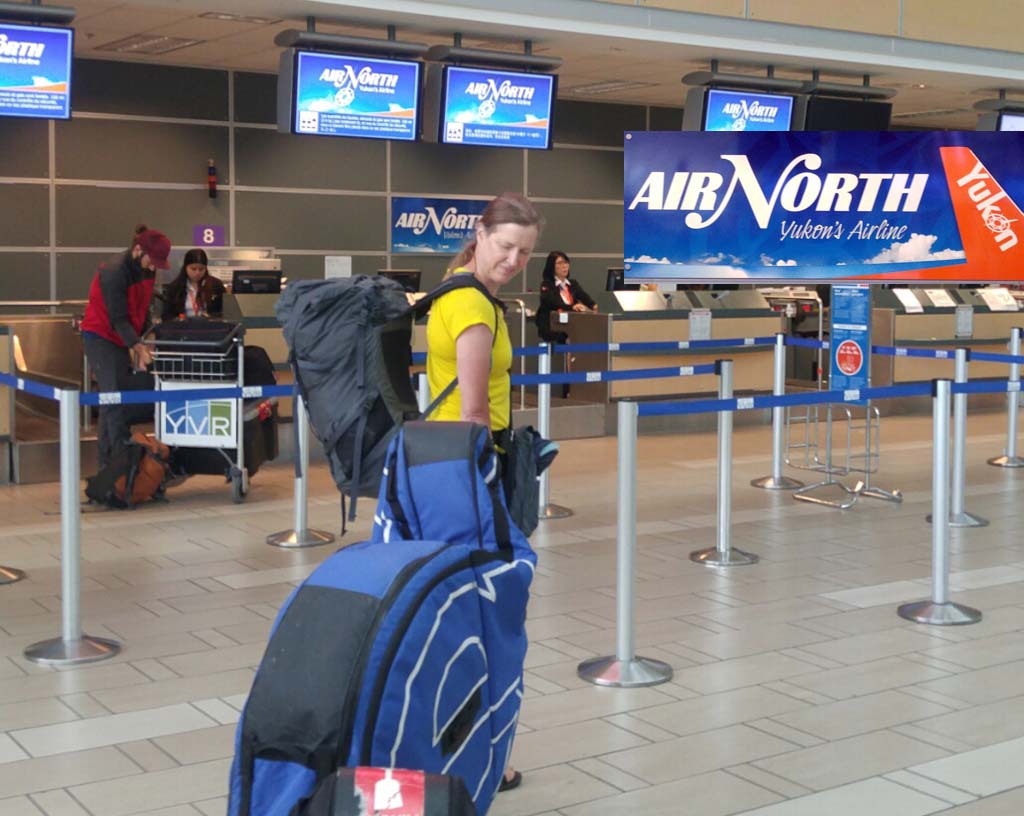 Packing our bikes for our flight on Air North They will treat your bikes with respect; and the bikes won’t end up in Saskatchewan! 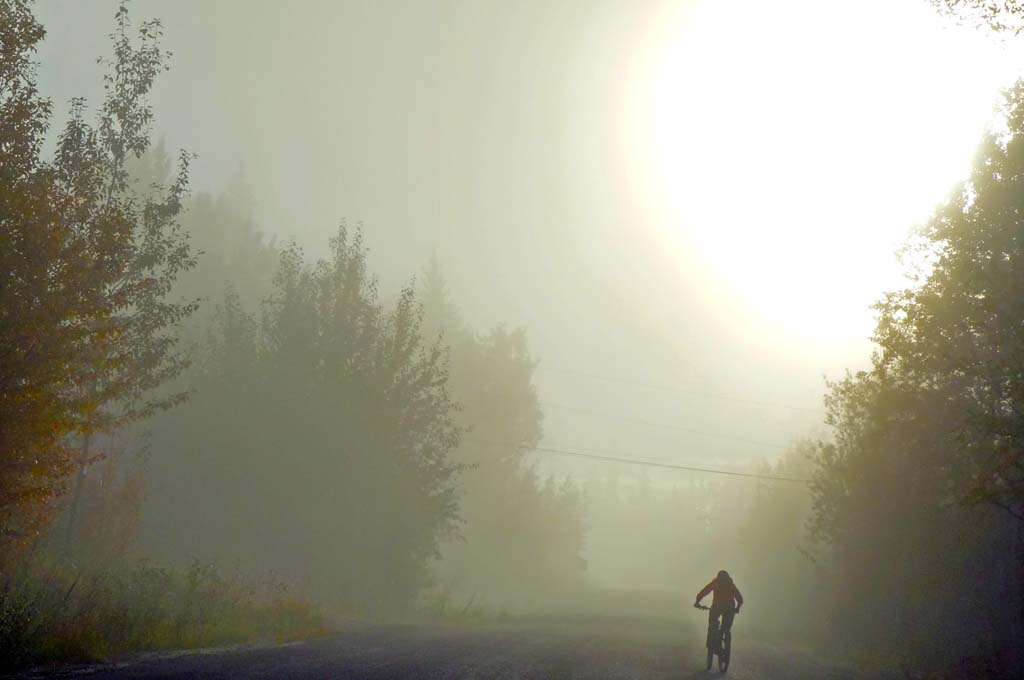 Dawson City’s trail network is very much in its infancy with a surprising number of the purpose-built bike trails having been built by either Marshall or Gavin in 2013-4 (Marshall for example started building when he was 22 years old). Dawson’s trails are natural and raw and steep. The trailbuilders like their downhill bikes and aren’t afraid to use them to their full potential. You should look elsewhere if you don’t have decent technical skills or want flow-trail experiences.

There are beginner and intermediate trails many of which are centred on the XC ski trails and the historic 9th Avenue trail system. The 9th Avenue trail in particular is a useful connector having been built on Dawson’s now-non-existent old 9th Avenue (the street disappeared when the Klondike gold rush abruptly terminated sending Dawson’s population from 30,000 to 5,000 in the space of two years). There is the Ridge Road Heritage Trail a Heritage Canada built out and back heading east from Dawson towards King Solomon’s Dome – the regional high point. It’s approximately a 2-3 hour non-technical pedal. It showcases Dawson’s mining and resource extraction history and is a good way to see the surrounding terrain.

There are four trails down the Dome; some of which are the Gavin/Marshall downhill trails; some of which are singletrack connected by doubletrack (the “Nature Trail) and some of which are more recent more serpentine meandering downhills (DishPig, Magic Carpet). There are also a multitude of other disconnected trails that form part of the XC ski network in winter. The shuttle access is easy-peasy on a paved road. Self-powered access is also no big deal with the ride-up taking about an hour and affording the potential for nice loops.

Downhill bikes aren’t required for the Dome downhill trails although we had to dial aggression back substantially compared to our guides’ dedicated rigs in order to preserve bike, life and limb. These trails are fairly steep but because of the lack of traffic on trails (at present the active biking population of town is less then 10 riders) don’t show much wear. So you’ll be hitting jumps and landing in mossy loam. We sampled some of the Dome downhill trails with the aid of Marshall and Gavin 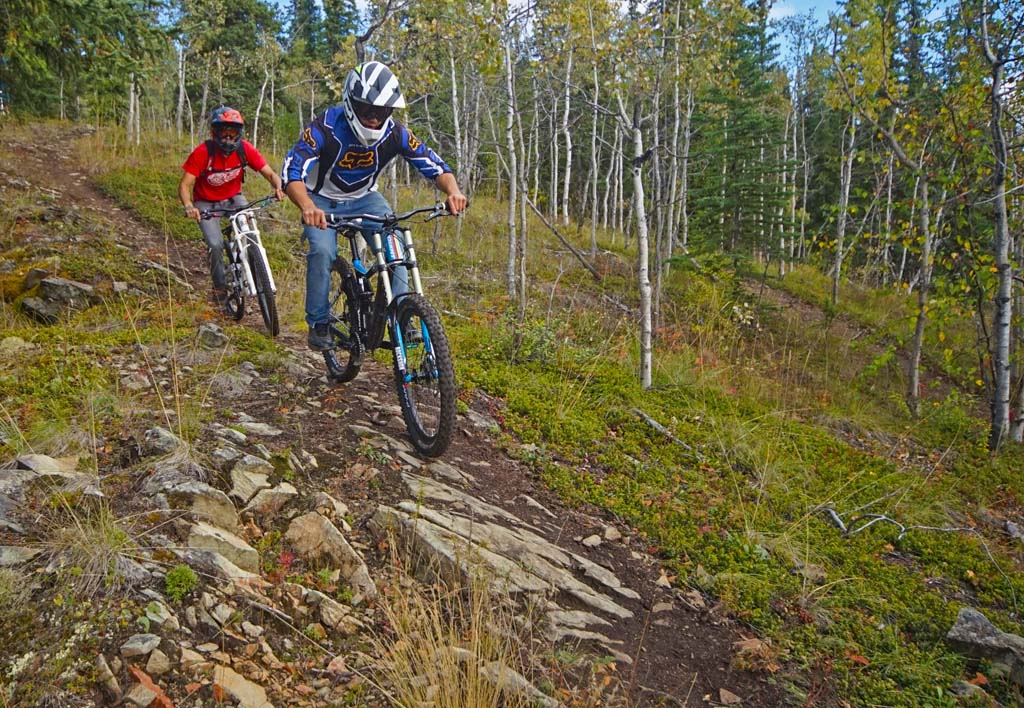 View from the Dome with morning fog

View from the Dome. Convergence of the Yukon and Klondike River as Marshall drops in on Dawson’s golden dirt

Gavin on the barrel jump; the barrels were dumped off the side when the road was first built. Marshall and Gavin found them and incorporated the heritage barrels into this trail built circa 2013. 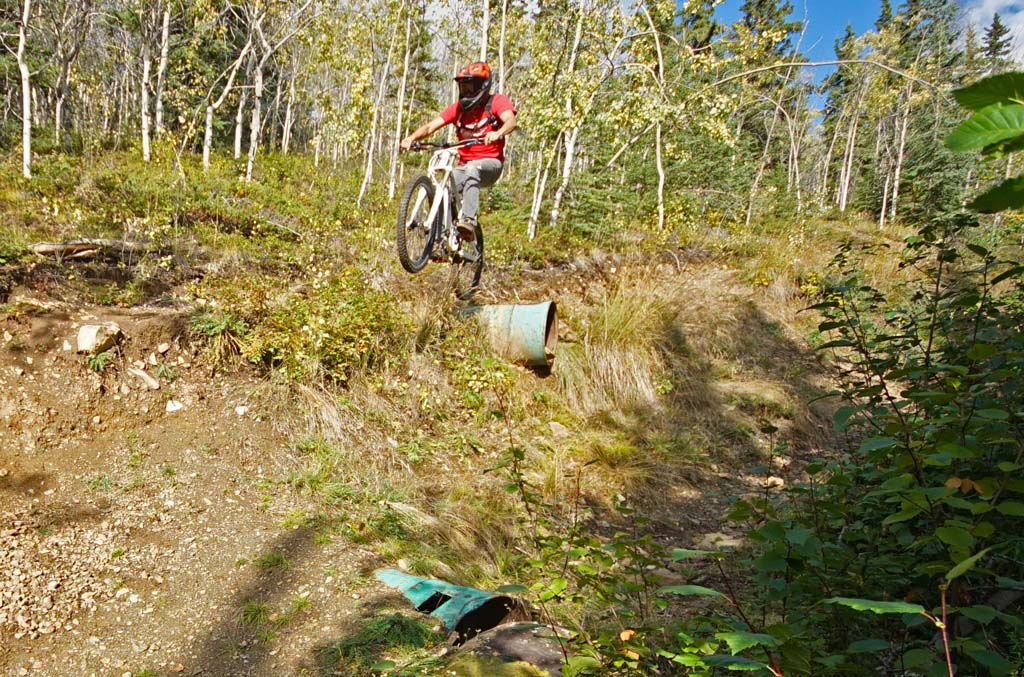 Marshall on a barrel gap 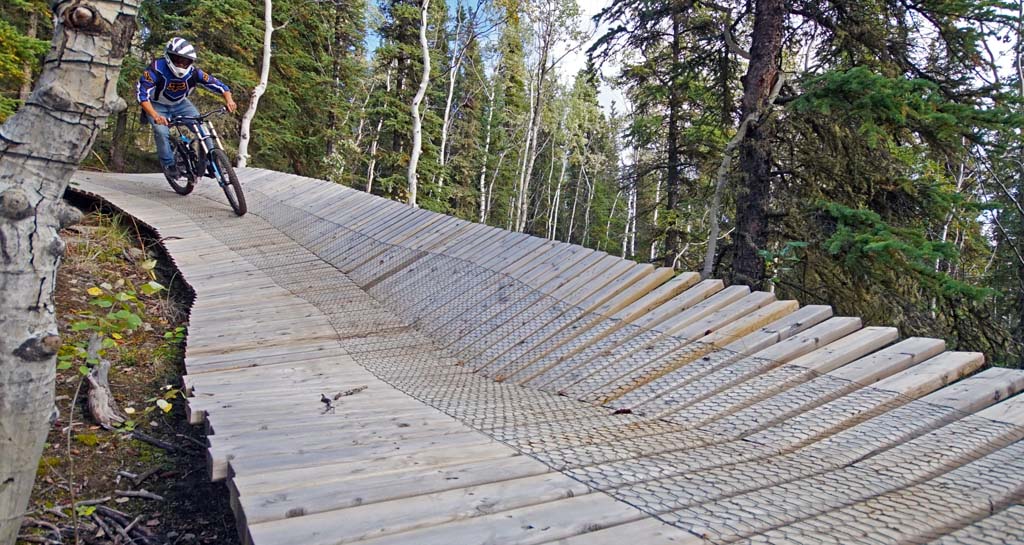 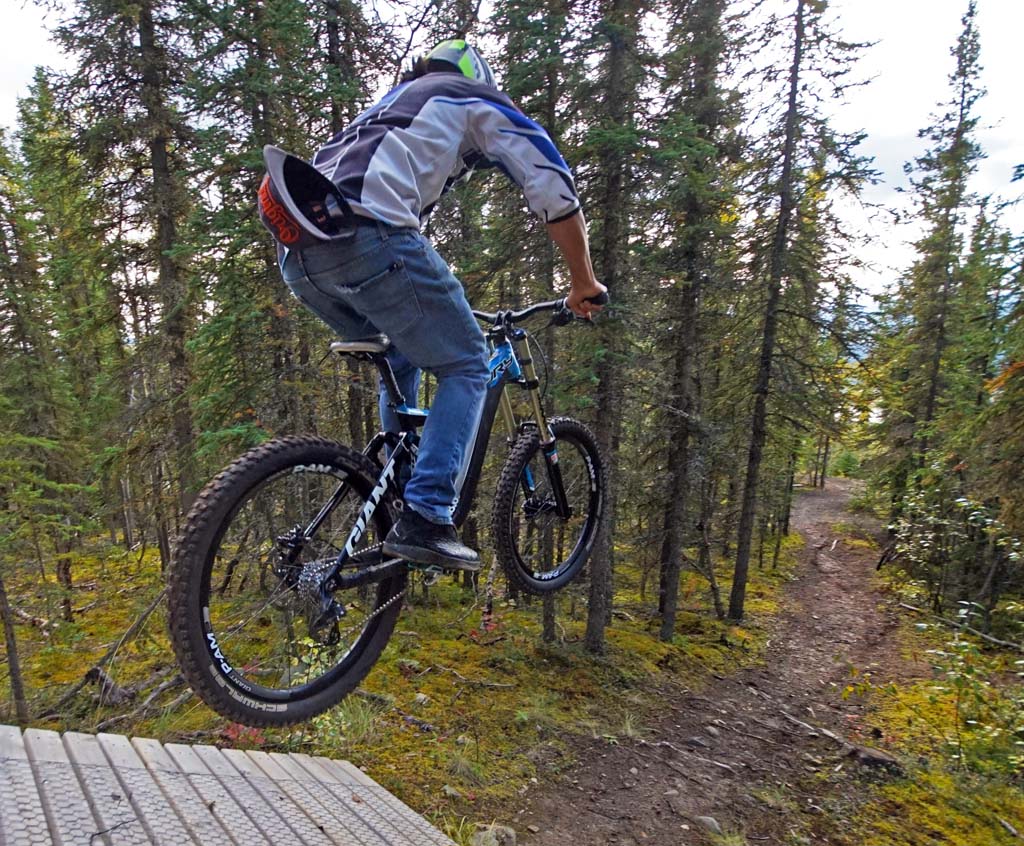 Gavin sending into moss and loam

The 9th Avenue trail is maintained primarily by KATTS (the Klondike Active Trail and Transport Society). It’s a historic trail above the current houses in the town. When Dawson first came to be (pre-Gold Rush), houses were built on a swamp. With the 30,000 people who came for the Gold Rush many people crowded on this trail above town. When people left this road became deserted and eventually this trail was built on the old 9 Ave road as a historical reminder.

It’s a worthwhile walking and hiking trail but in its entirety is clearly not made for biking having copious amounts of stairs. You can use portions of it to access climbs to the Dome. Use it as a worthwhile way to spin out your legs on your first day in Dawson and to check out some mining history 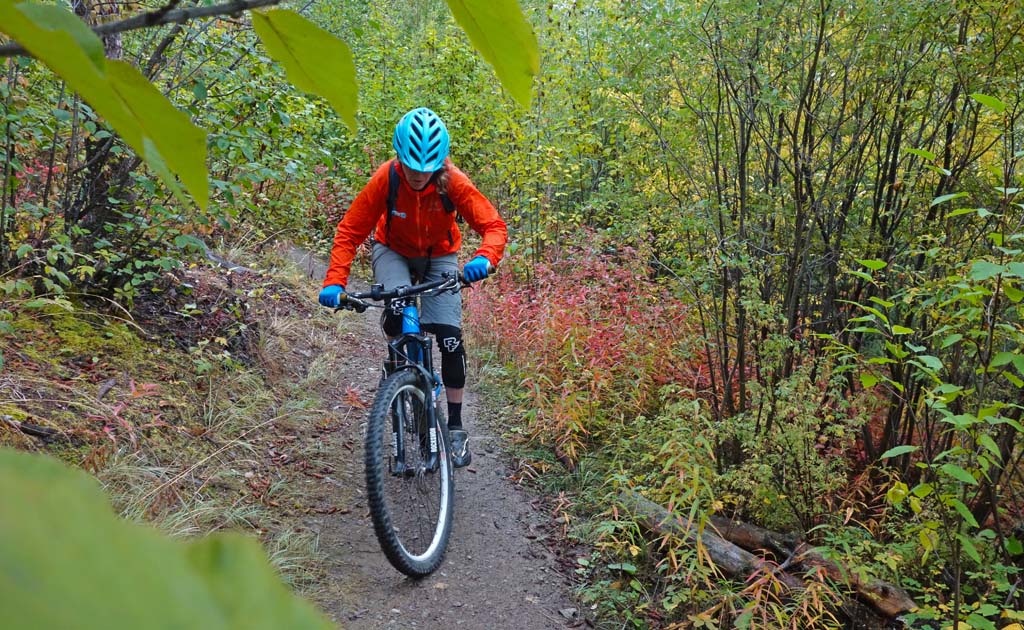 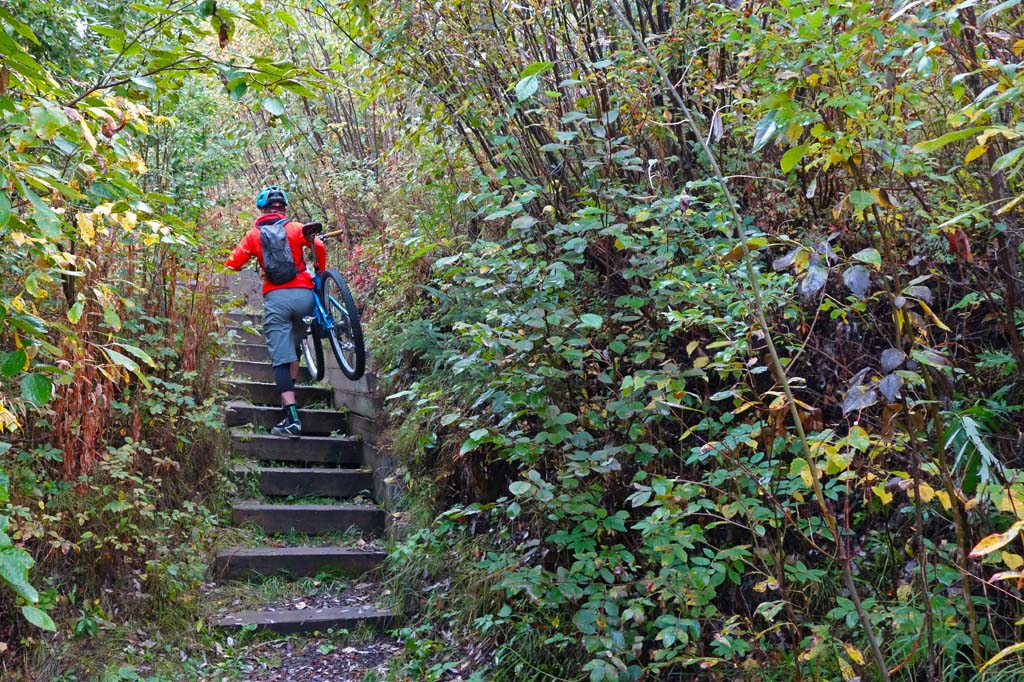 There are some other trails dropping off the Dome that aren’t just straight down. The Ridge Trail is primarily a hiking trail dropping off the Dome and intersecting many historical sites including notablt the old Moosehide village trail as it drops to valley bottom (obtain THFN permission before taking the Moosehide). The Ridge trail is insanely scenic; is old-school technical jank; and has some steep portions. It also has a short hike-a-bike section traversing a natural rock slide off the Dome.

Dish Pig to Magic Carpet require one to first brake-burn down some of the steeper Dawson trails then intersect the trails close to the satellite dish radio towers. Take all of these trails on a scenic day and make sure you lots of time to oogle at the views 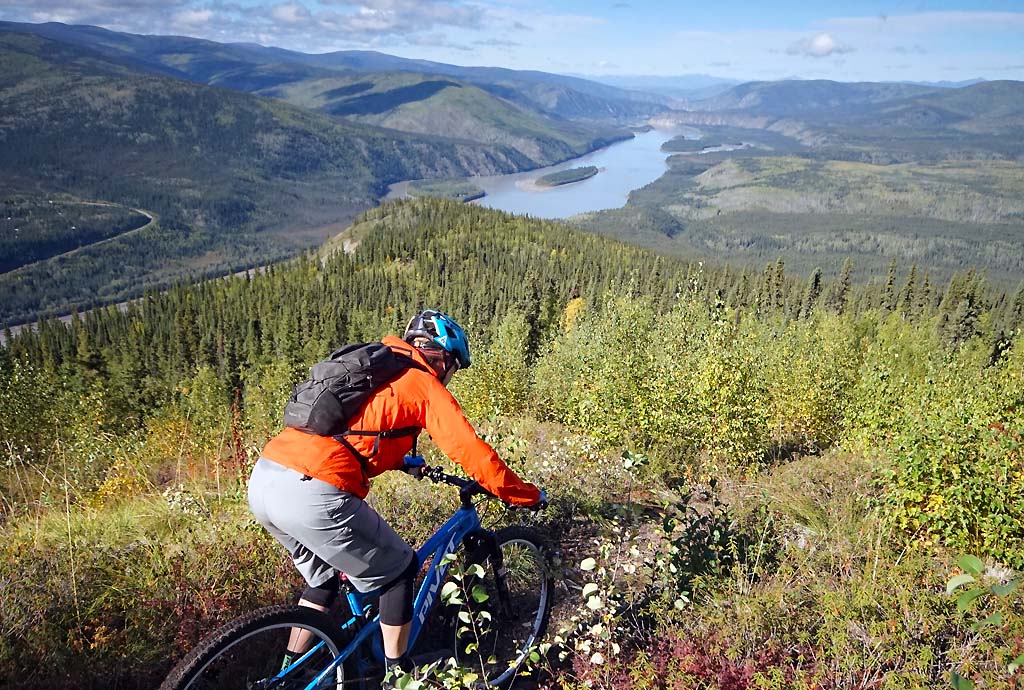 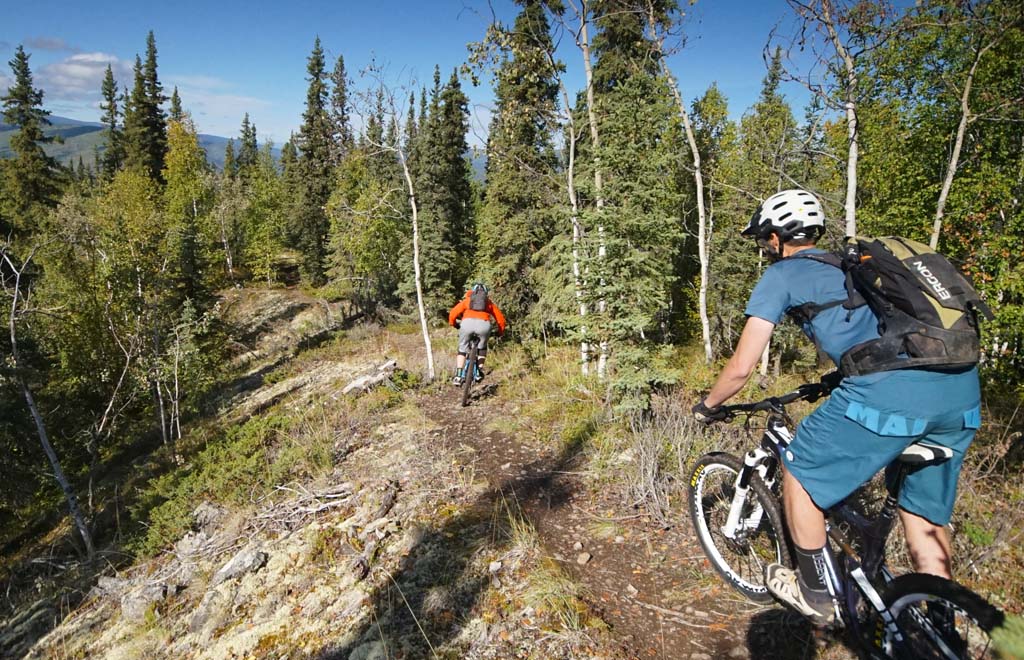 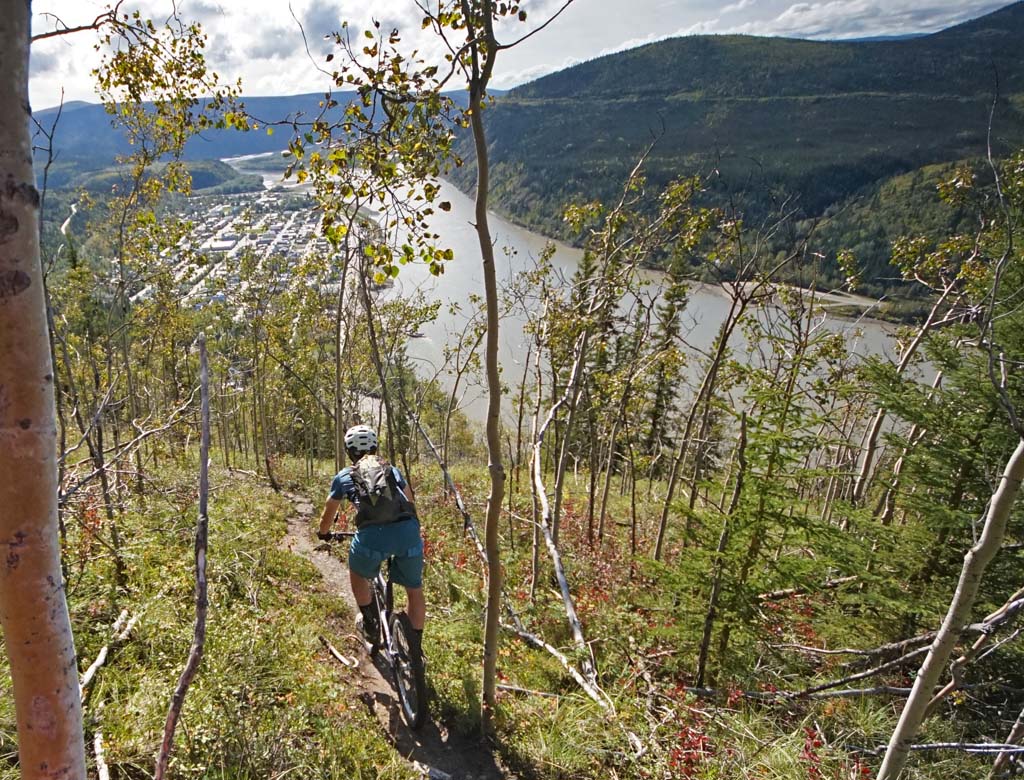 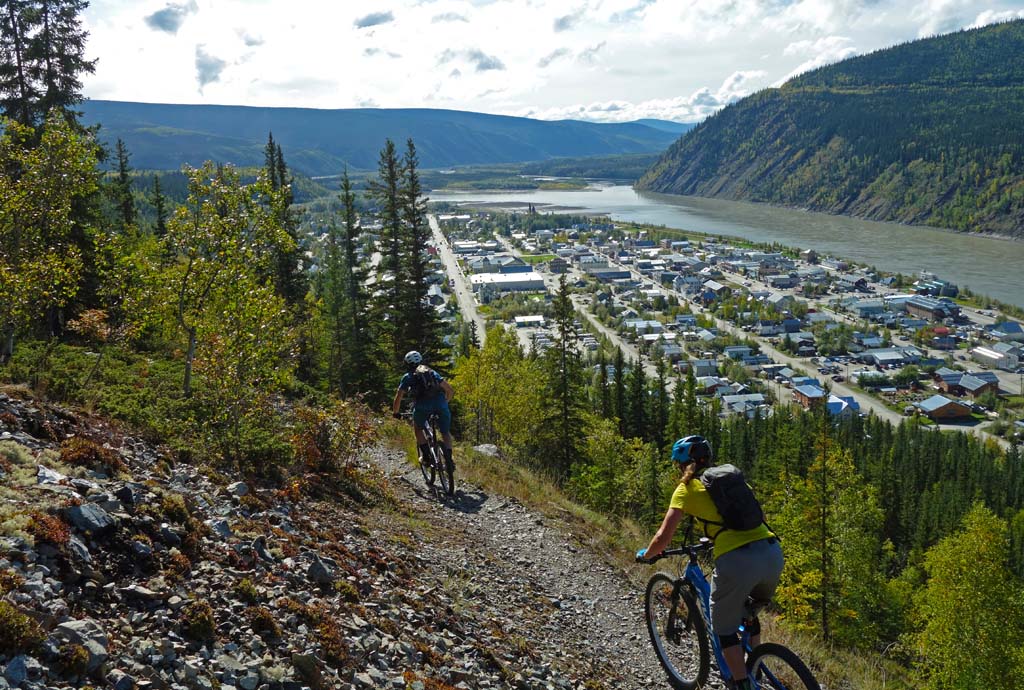 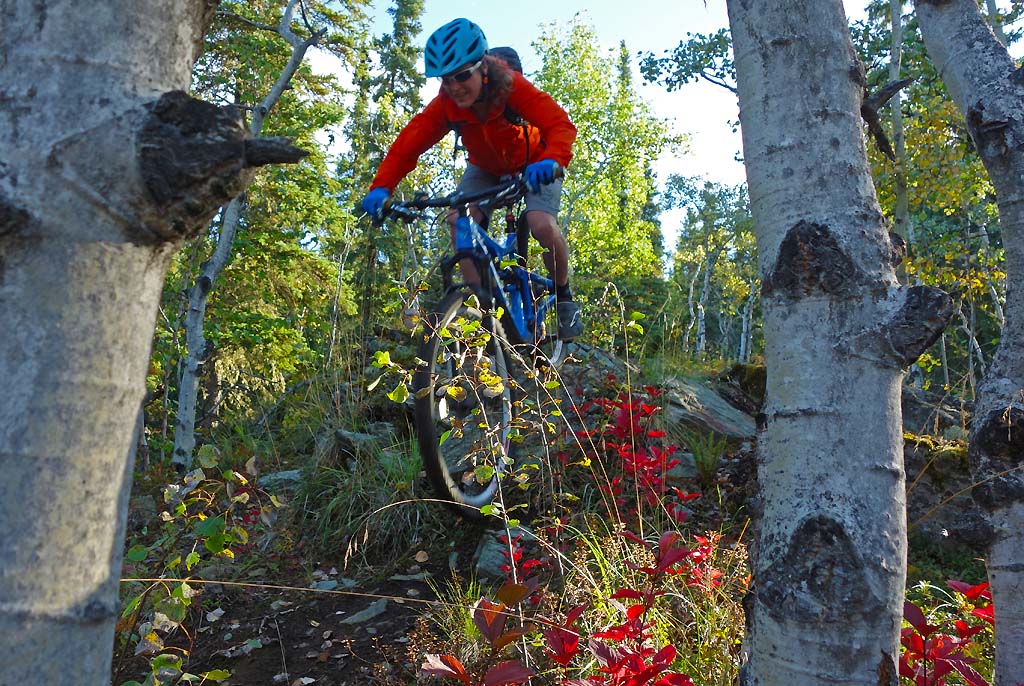 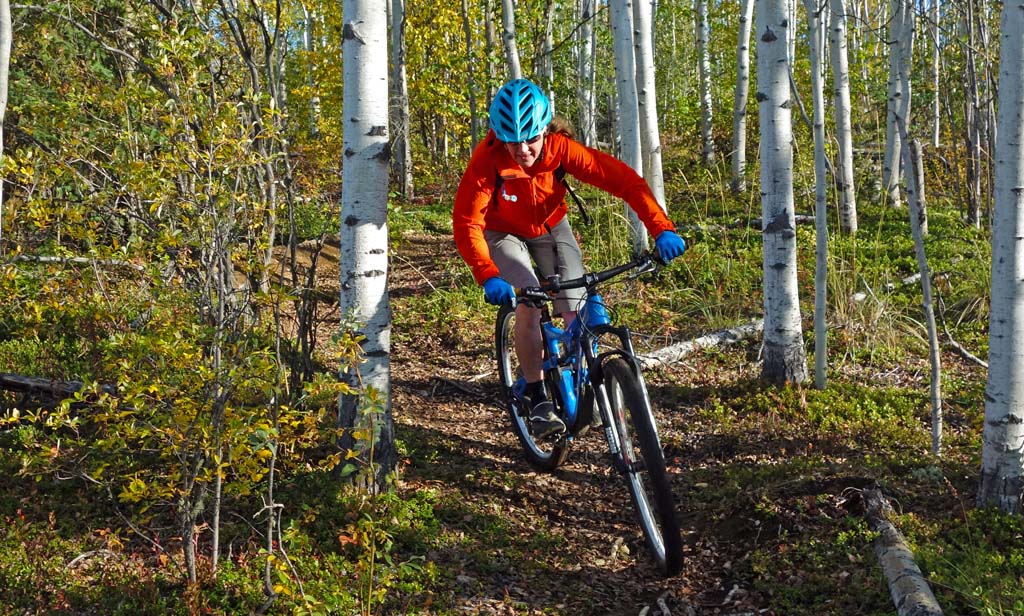 This is from another climb up and descent down Dish Pig

The people of Dawson and future trails

The area is traditional Tr’ondëk Hwëch’in First Nation. The THFN manages the land in true partnership with the Yukon territorial government and the City of Dawson. The THFN appear also to have been blessed not just with beautiful land but also motivated leaders and young people. We had the privilege of riding with two of these young people who, as previously mentioned are the primary trailbuilders; Marshall and Gavin.

A major trail plan developed by Dawson City in cooperation with the Tr’ondek Hwech’in First Nation envisions management and expansion of the existing trail network for multi use and community benefit while accommodating tourism. The plan also envisions preserving the gnar of the existing natural technical mtb trail network as part of a system. One might raise eyebrows at the idea of expanding local and tourism biking in this remote part of Canada until you realize that Dawson City, the THFN and local bikers are committed and supportive. And that the plan’s authors are the same behind the miracle of biking at Carcross where a small town of 500 people have created a magical network of multi-use trails built and maintained by locals.

Plans are in the works to build out some blue and green trails via the Yukon government’s expansion of the Singletrack to Success programme as well as to build out climbing singletrack up the Dome. Having said that plans are simply wishes and hopes and require funding to implement. Fortunately Dawson City has a strong baseline on which to build

Gavin Johnson and Marshall Jonas are the primary trailbuilders as well as enthusiastic hard-charging bikers representing the progressive and foresightful Tr’ondëk Hwëch’in First Nation. The THFN partners with “Singletrack for Success” of Carcross fame in pursuit of Dawson City trail awesomeness.

Some History of the Dome 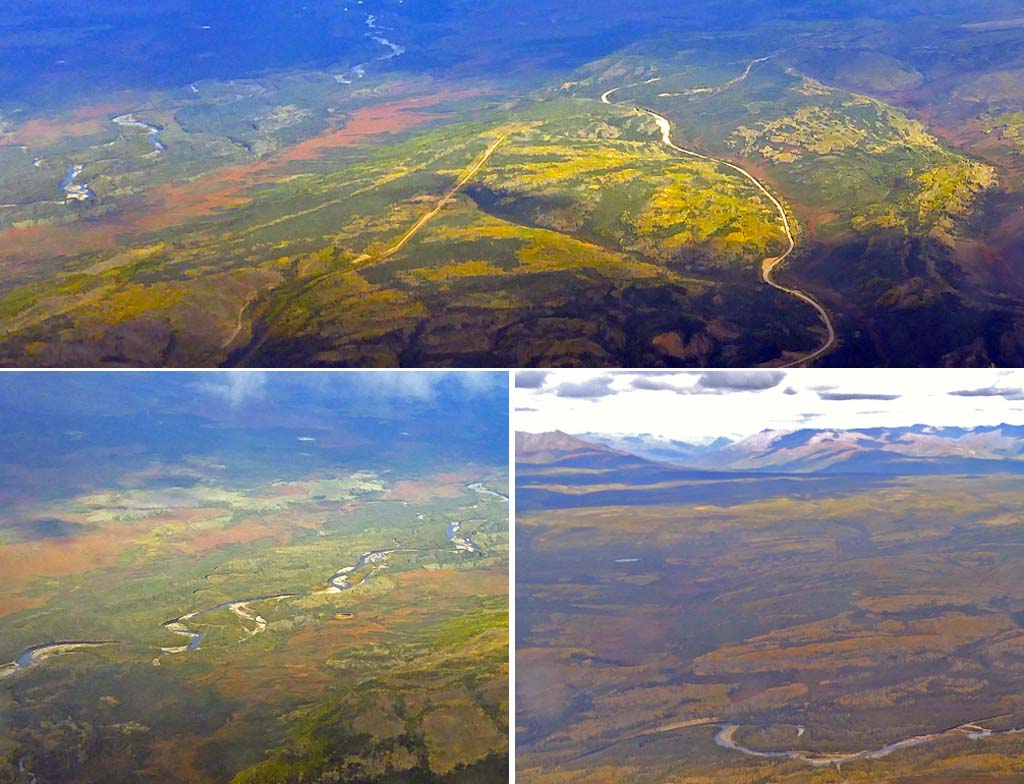 Dawson colours from the plane 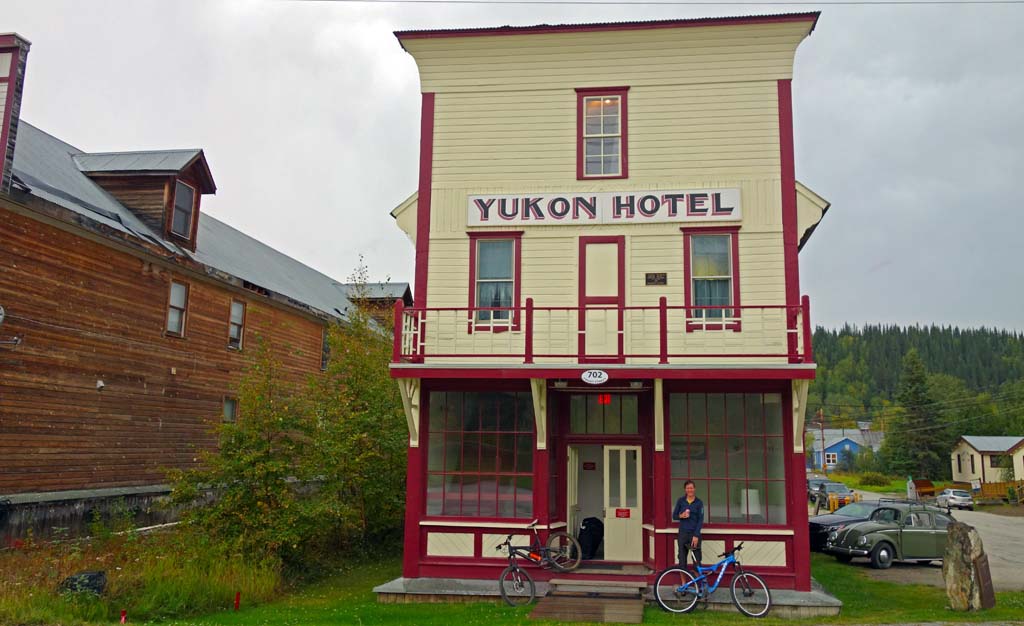 We stayed at the Yukon Hotel, booked through the Eldorado.

The view from the Dome allows you to see the Yukon and Klondike River. It was the latter that brought the gold prospectors to the north where they met the THFN. Perhaps it was a harshness of the cold winters and the wildness of the terrain that made the new settlers work together with the THFN as opposed to trampling them. BE that as it may, the Klondike name for the region and the river were the newcomer’s interpretation of the Tr’ondëk name. Now its Golden fall colours, vast landscapes and history that bring the tourists here. Trails will also bring people here to sample the golden Dirt of the Dome.

Thanks to Marshall Jonas, Gavin Johnson and Ben MacInnis for showing us around. Yet another tip of the hat to Jane and Derek for the Singletrack to Success programme which is coordinating paid trailbuilders from THFN to better the trail network.