Our last day and its familiar territory for us. I’ve been in this area many times before and day trips from Gun Lake to the Spruce Lake are bread and butter. But there’s a reason I keep returning again and again. Although this area gets more traffic then the other trips we have done so far, there still aren’t a lot of people around. In fact we don’t see any other groups around today even though this is a pretty standard route.

In todays route we left Spruce and headed up to Windy Pass. Some of us kept going to the LS bluffs S of Windy Pass while the rest continued down the trail. We joined up again at the Eldorado Cabin and took the 1km vertical downhill of Lick Creek back to the ranch. Considered a “rest day” after our long march up and over Elbow – Lorna – Deer Pass from yesterday it still takes about 7 hours to complete today’s journey. Conditions were suitably gorgeous again, with warm temps in the valley, cool temps in the passes and bluebird skies. 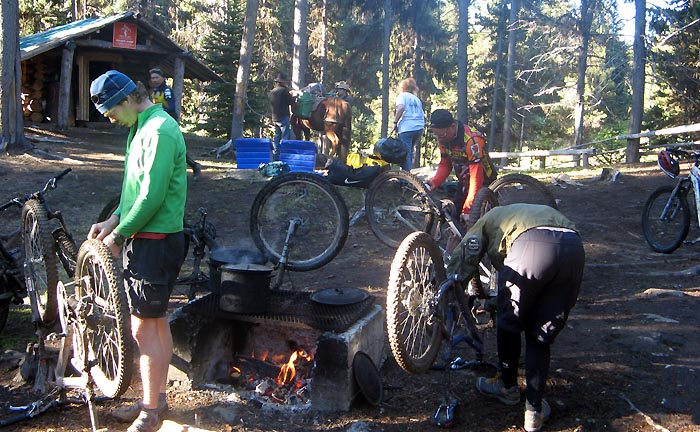 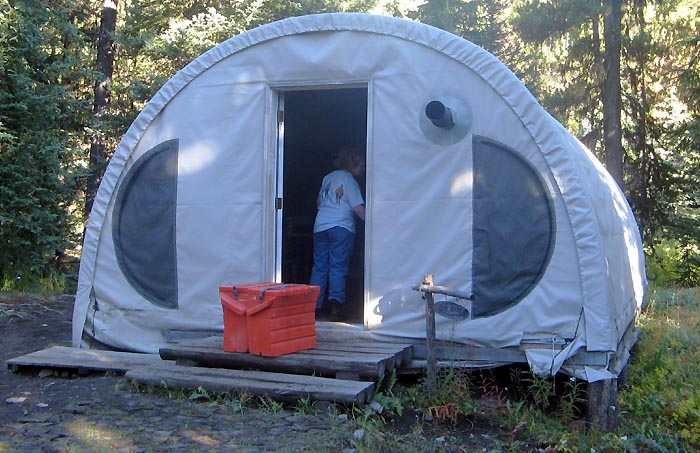 In the cook-shack, Tanis prepared yet another breakfast, then breaks camp 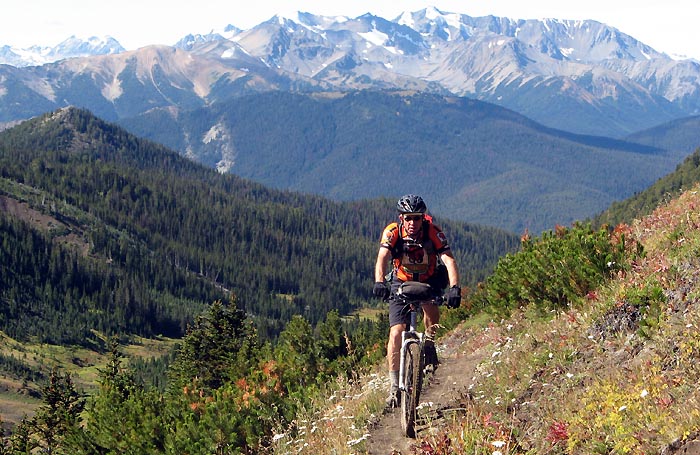 We start climbing almost immediately; Kevin breaks out into the alpine approaching Windy 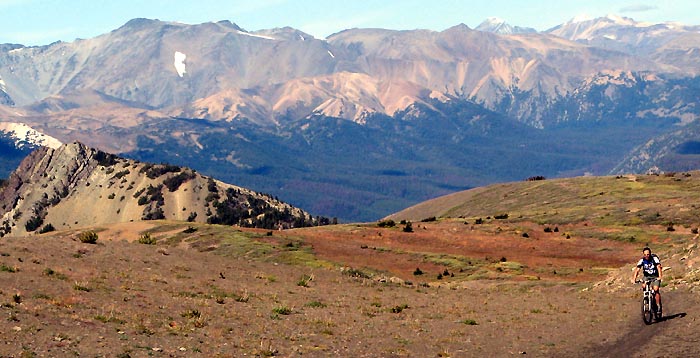 Monte approaching Windy Pass. This is a lot better then before when it was windy and stormy!

Half the group descends Windy Pass to the Eldorado Basin. Half of us start the bike and hike to the LS Bluffs at 2350m

Rob and Monte go up more! 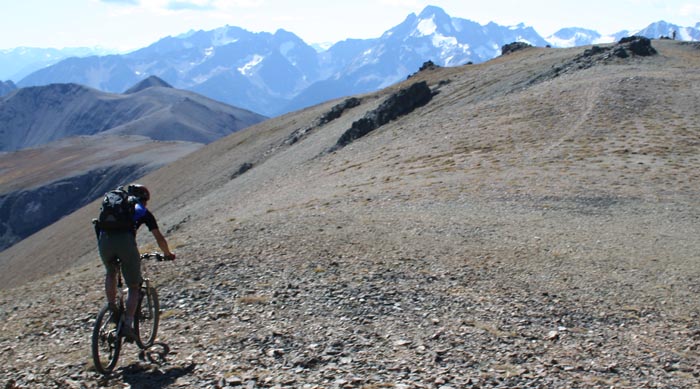 Lee approaching the crest of the bluffs

Panorama from the top of the LS Bluffs looks W at picture left then looks N at picture right. That ridgeline on picture right climbs towards Eldorado Mtn (2449m) and looks tasty 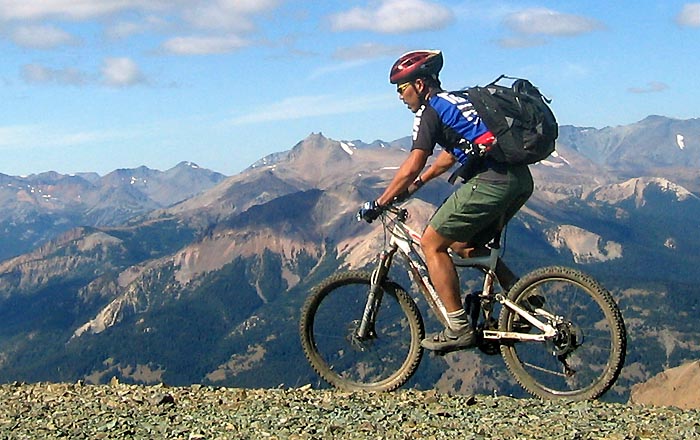 Lee posing it up on the Rocky Mountain Altitude. 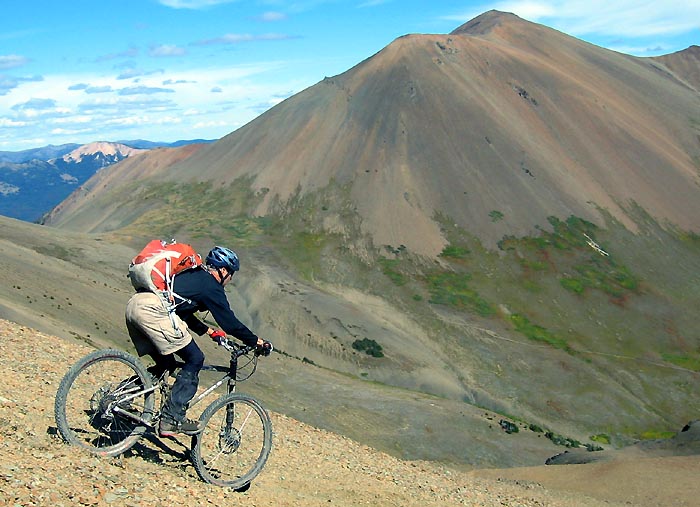 The descent from the LS Bluffs to Eldorado Creek to the SE doesn’t really follow a trail. It’s more in the nature of linked goat paths and descends 500m. Monte drops in. 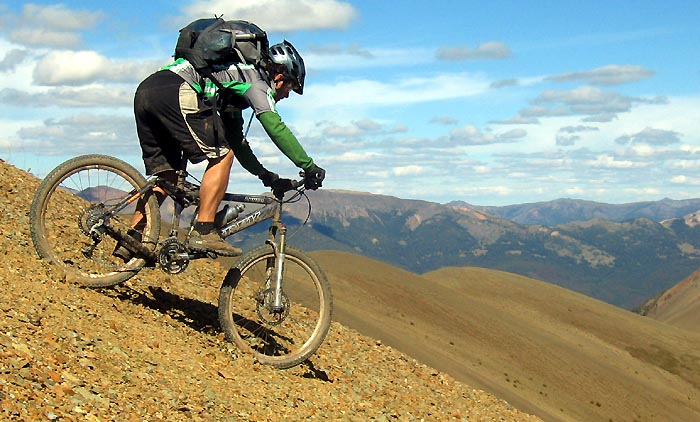 Iori dropping in off the LS bluffs 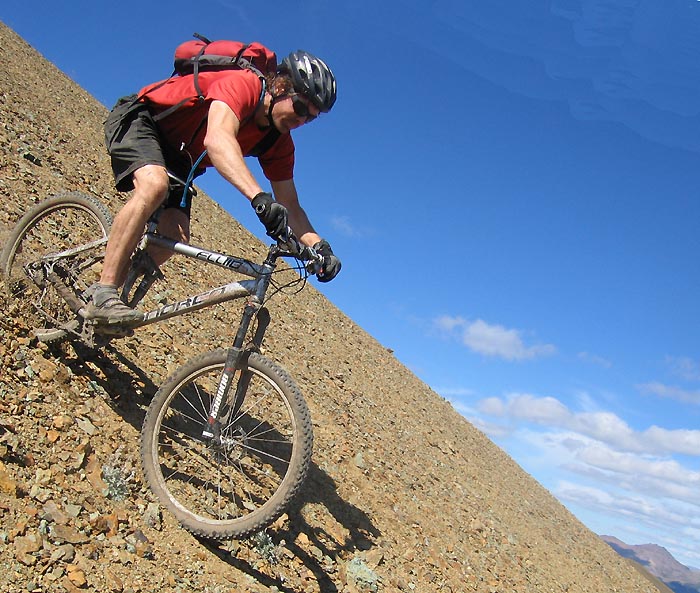 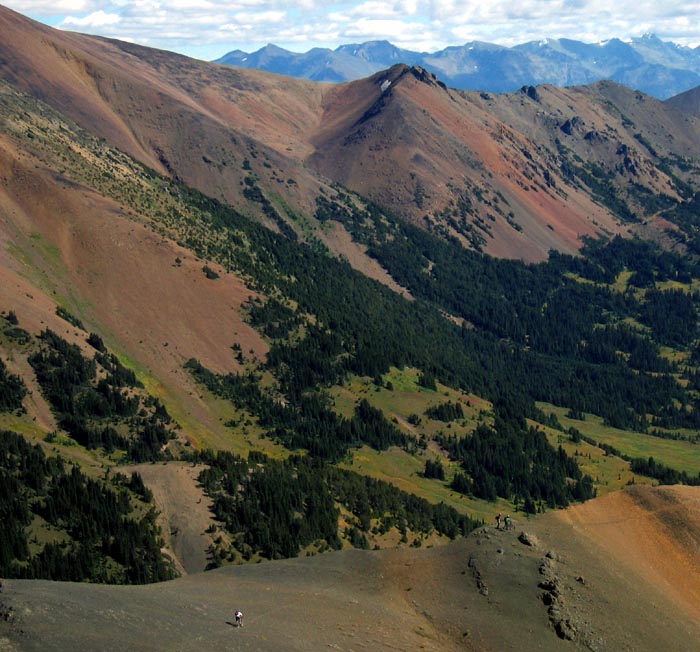 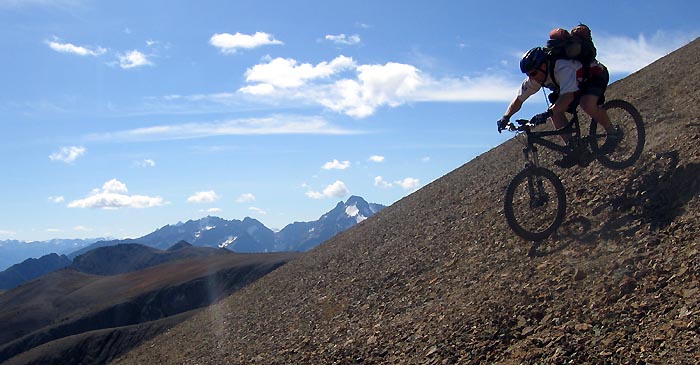 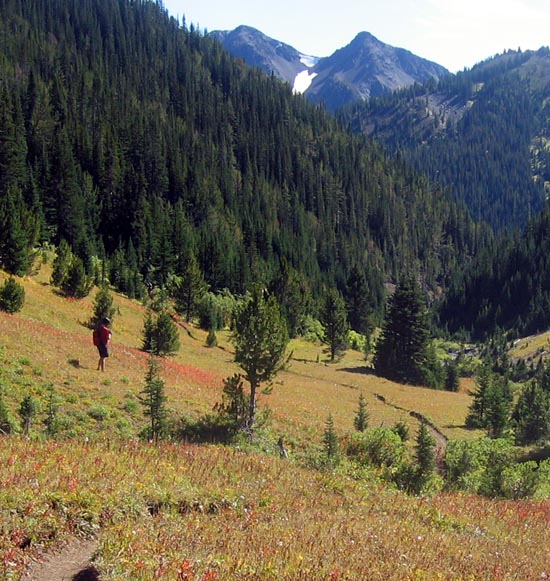 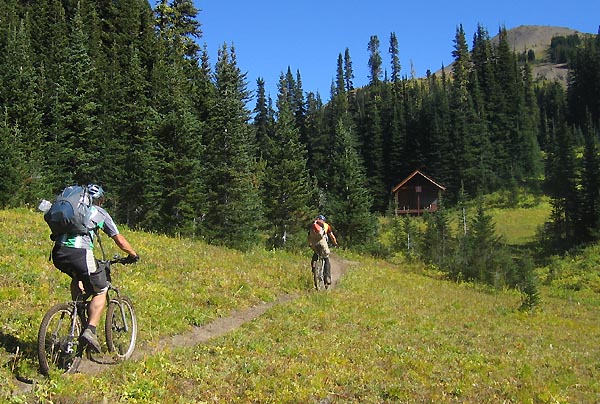 There’s a minor climb of about 150 m from valley floor to the Lick Creek pass. Lee ascends 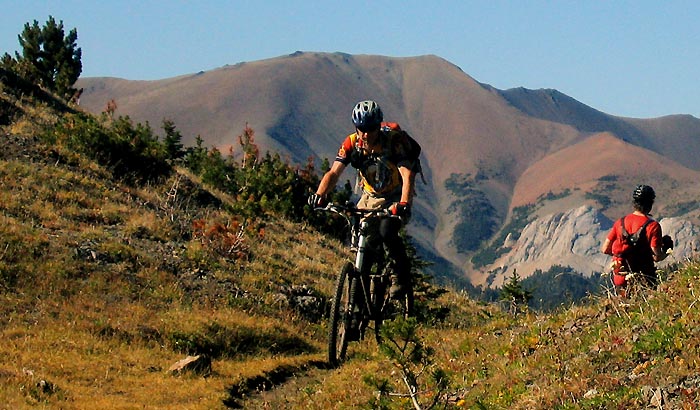 Monte at the Lick Creek pass with Harris Ridge in the backdrop. 1100m of descending awaits 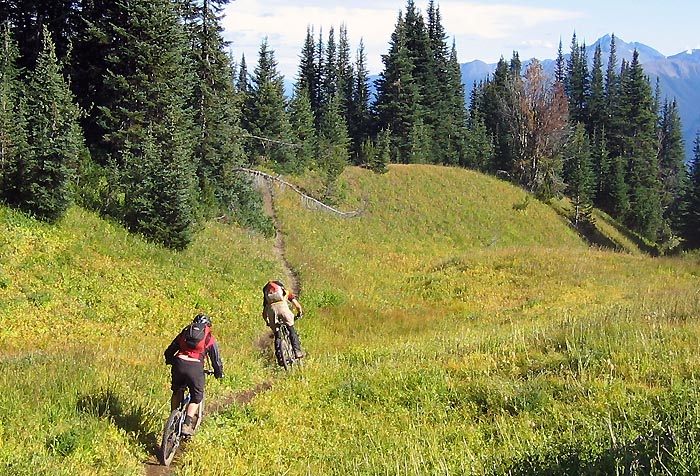 We drop in and haul ass. Monte leads out Iori 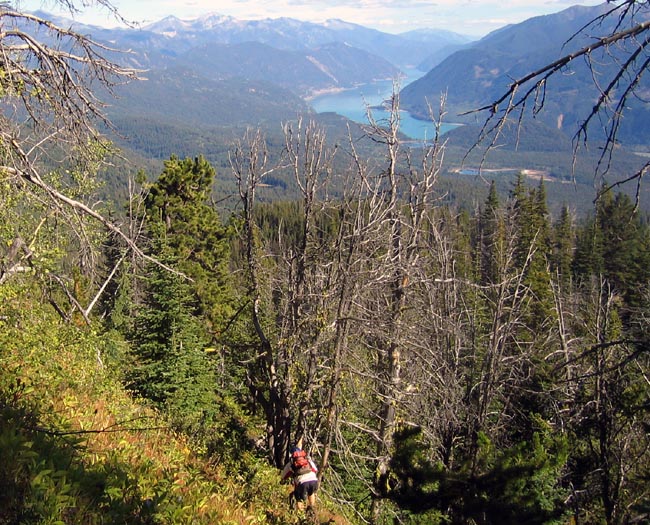 Rob drops down further. The foliage changes from sub-alpine boreal forest to a mix of decidous and evergreen as Carpenter Lake hoves into view. 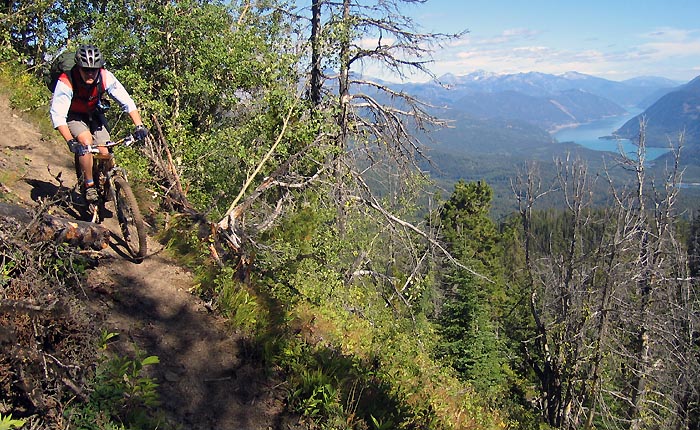 Sharon on the downhill leg to Gun Lake where cold beer awaits! 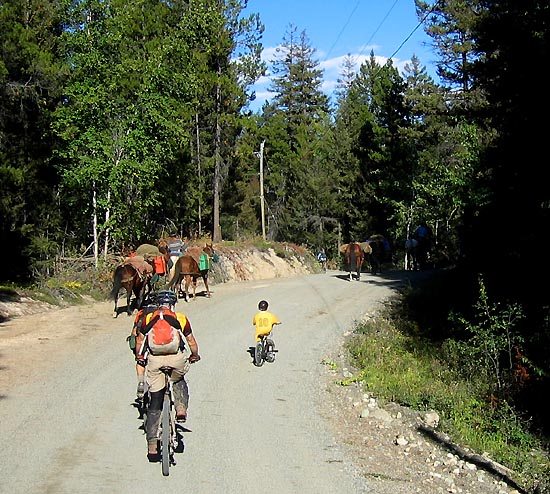 A mix of doubletrack and logging road takes us from the end of the Lick Creek singletrack back to the Gun Creek ranch. We actually catch the horse pack train on the final leg and the Menhennick kids escort us back in safely. 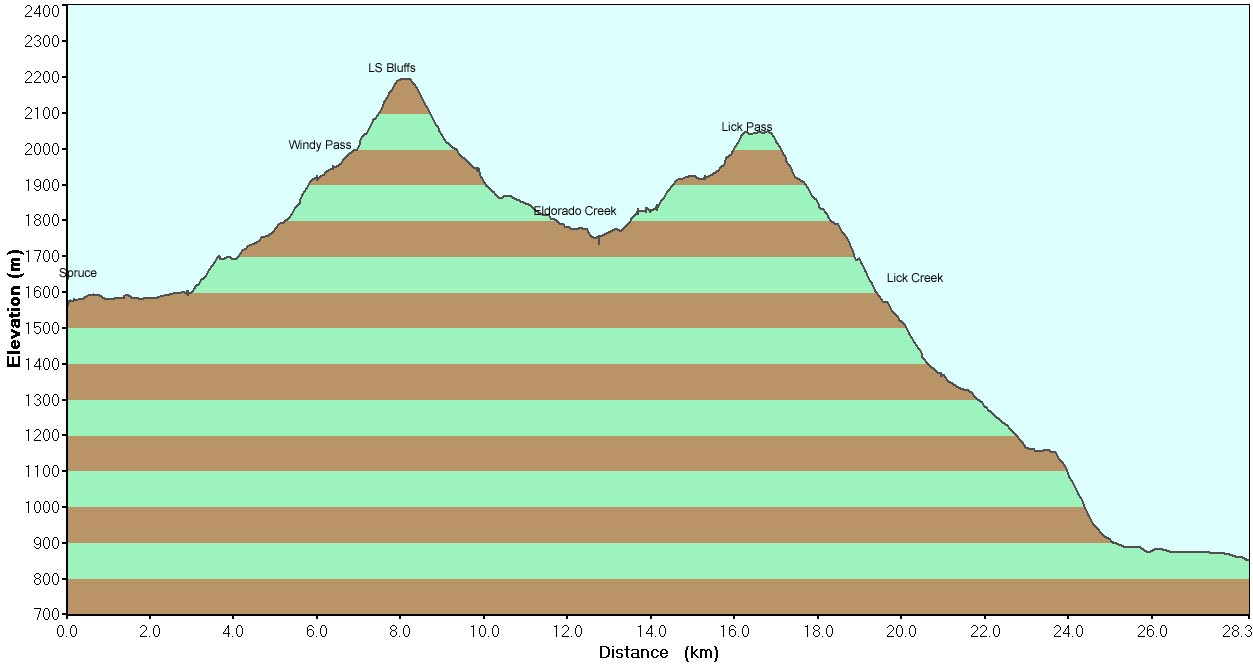 This entry was posted in 2008, bike and tagged Chilcotins, Spruce Lake Wilderness Tours. Bookmark the permalink.