(or this always happens when I turn my brain off)

Plans are made, weather is perfect, maps printed (Softmap sucks!grrrr), bag are packed… not enough sleep … off we go to the Brew Hut. Even check with the VOC to make sure not many groups are in. Get hold of Powder Mountain Cat-skiing and check that the road is plowed to Roe Creek/Chance Creek main and find out where to park to stay out of the way.

We didn’t make it to the hut, getting lost right away by skiing UP a 10km cat-track used by sledders and the cat, ascending from 600m to 1420m over about 3 1/2 hours and going the opposite direction towards Tricouni.

The good news? The views were great. None of us killed each other. Pat made it to Zone 3 and stayed below anareobic threshold, Jon sweated out a lot of beer and Lee learned that Cloudburst has big wireless and broadcasting antenna on it. It took us only 20 minutes to ski down what took us 3.5 hours to skin up. We found out that the new cutblock and heli-landing doesn’t go anywhere.

The other group that went in behind us also failed to navigate the truck parking lot and landing and also never got to the hut.

Pat’s writeup is here with pictures

Views of Cloudburst, Ossa and Pelion from the Chance Creek cat-track still blissfully unaware that we’re up the wrong drainage without a clue. 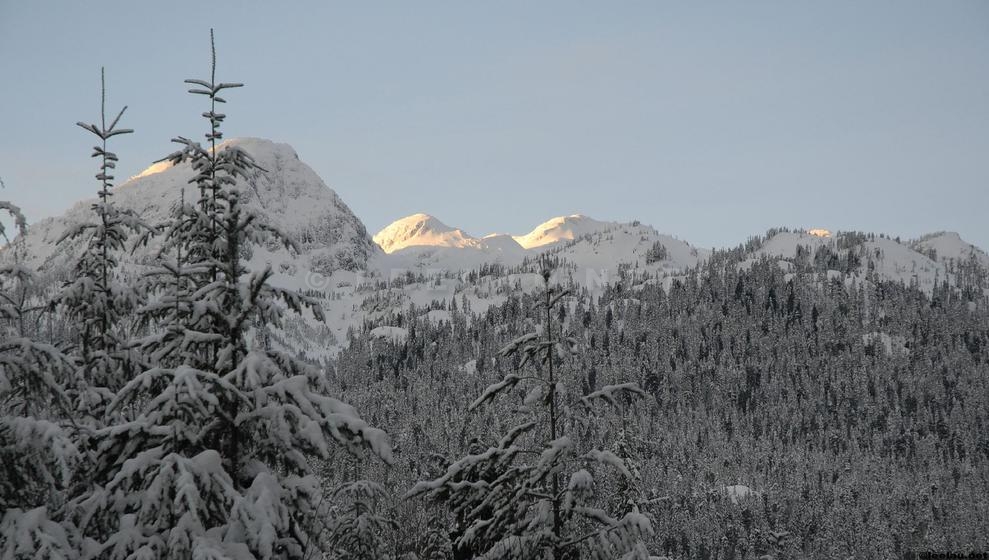 More wanderers without a clue – Jon and Lee 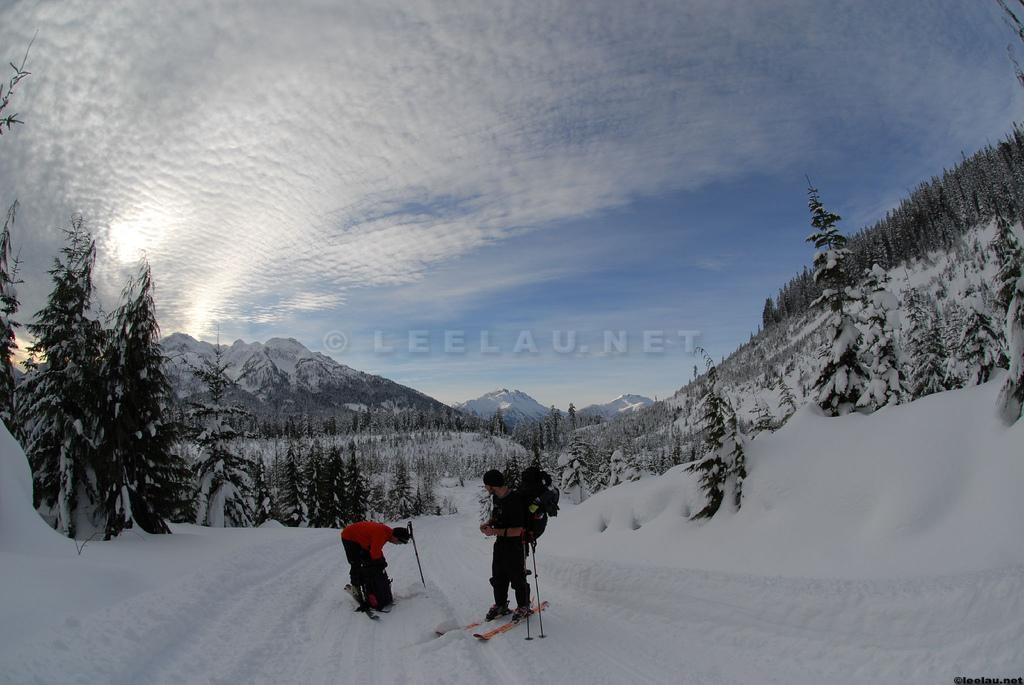 To salvage the situation and avoid having to go back to North Van with our tail behind our legs, eat all-you-can-eat East Indian food and fill a hot-tub with more bubbles we decided to go to the Duffy Lake area. That turned out to be a really good decision. Moonlight on the Cayoosh trail. 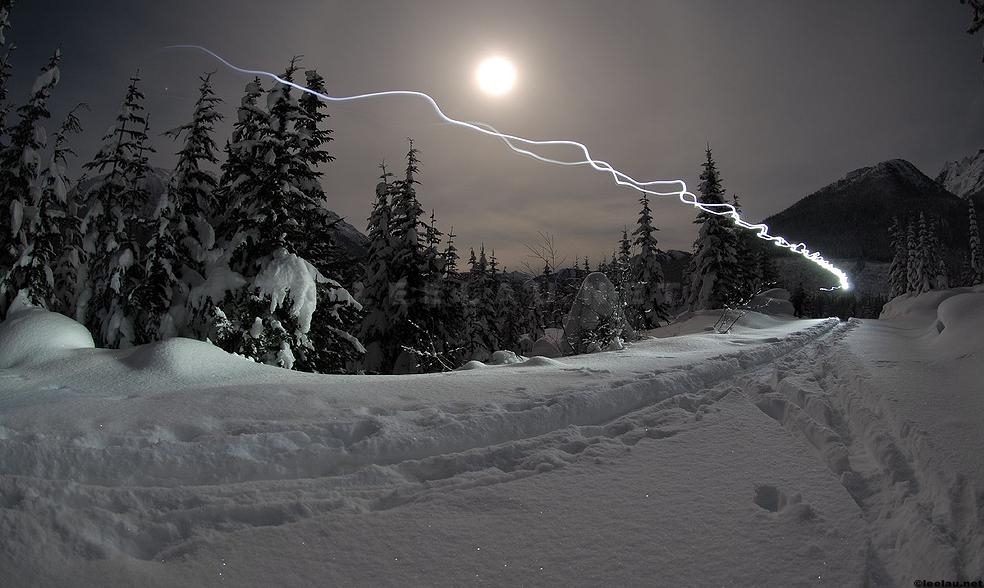 More mood-lighting by a waning 3/4 moon over the Rohr-Marriot drainage. 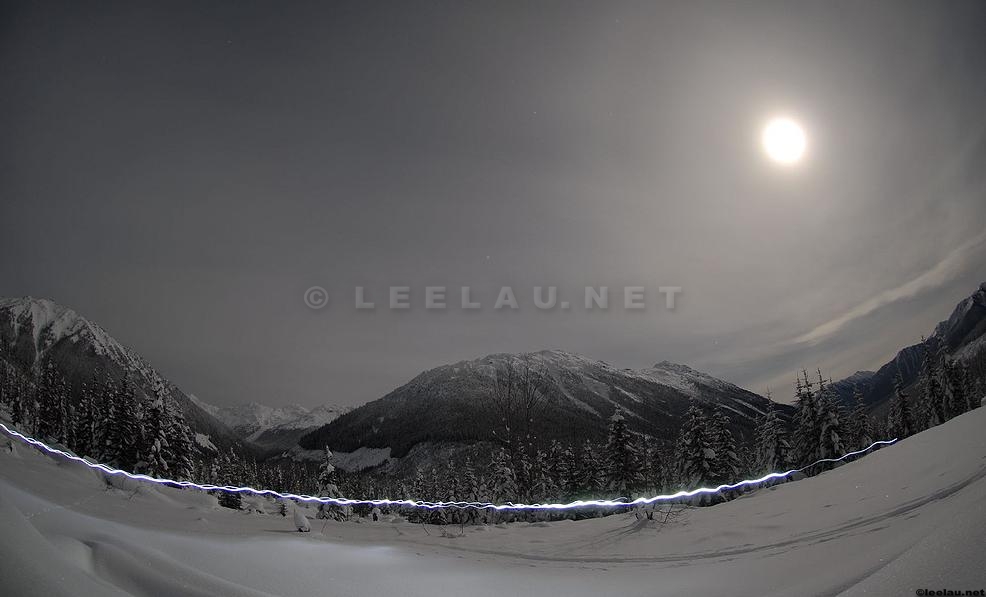 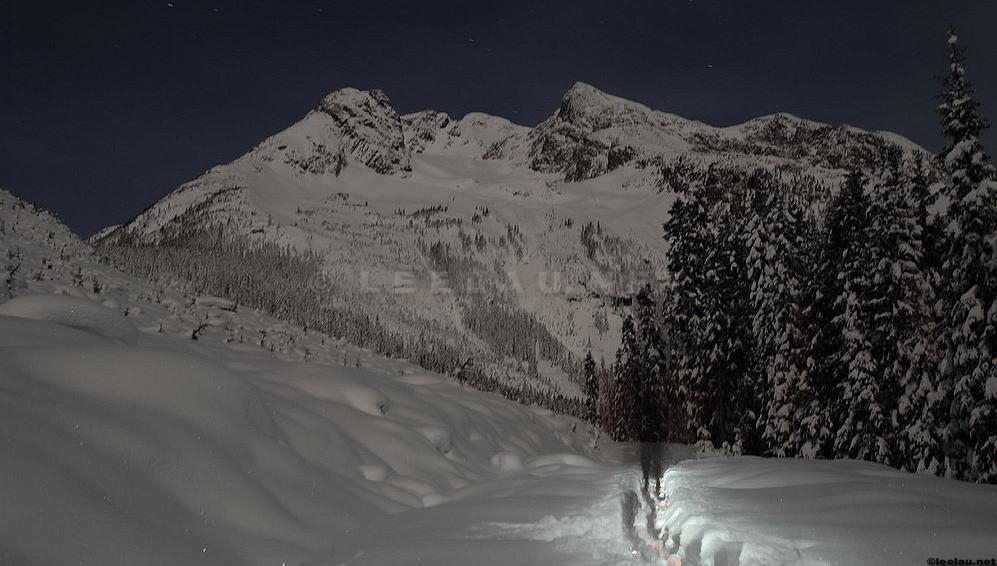 We had the hut all to ourselves – just us and the moon. 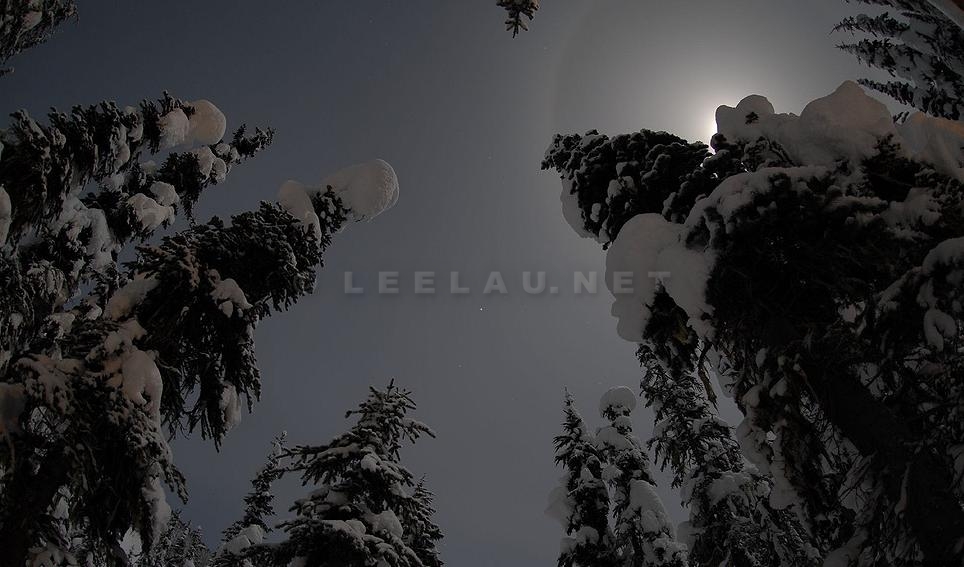 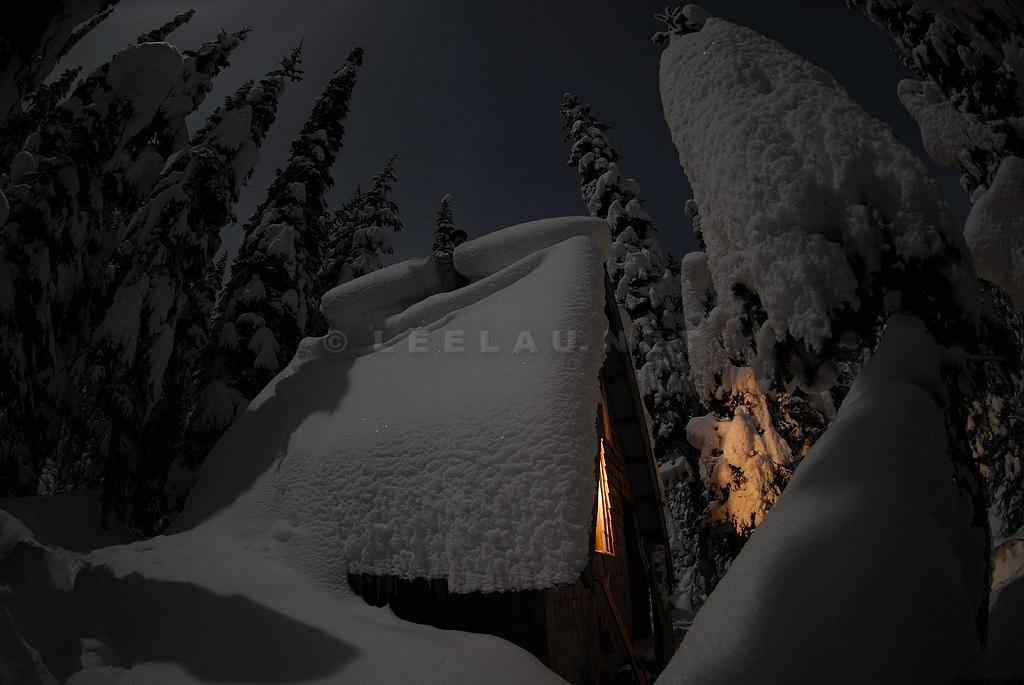 The next morning it was also clear but temperatures had spiked – it had been minus 12 degrees celsius last night. It was already close to freezing in the morning when we started out. 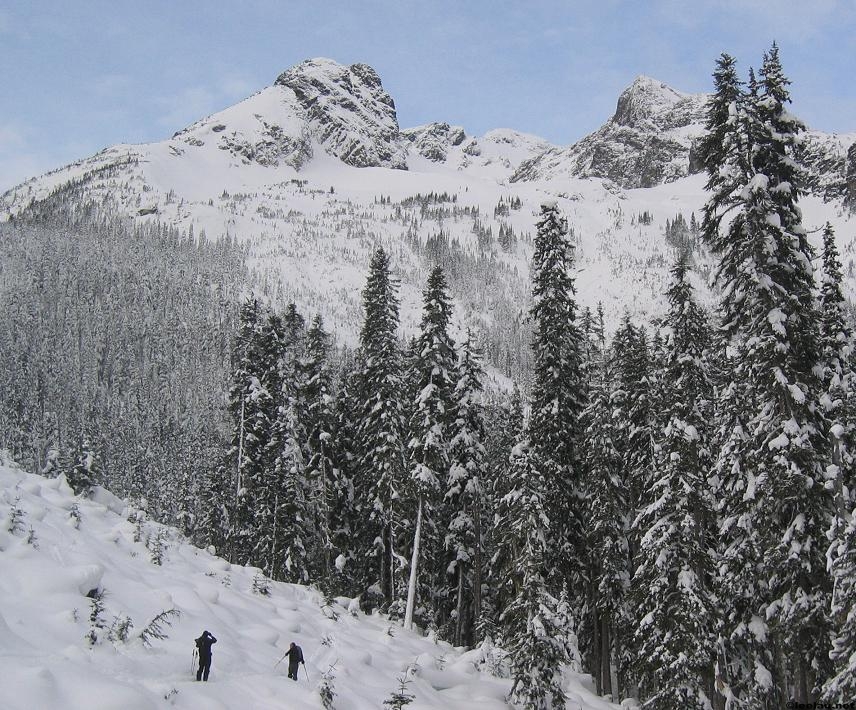 We decided to try to get to some big SW facing slopes just N of us along the Cayoosh north creek drainage and hopefully get to the top before temps got too high. 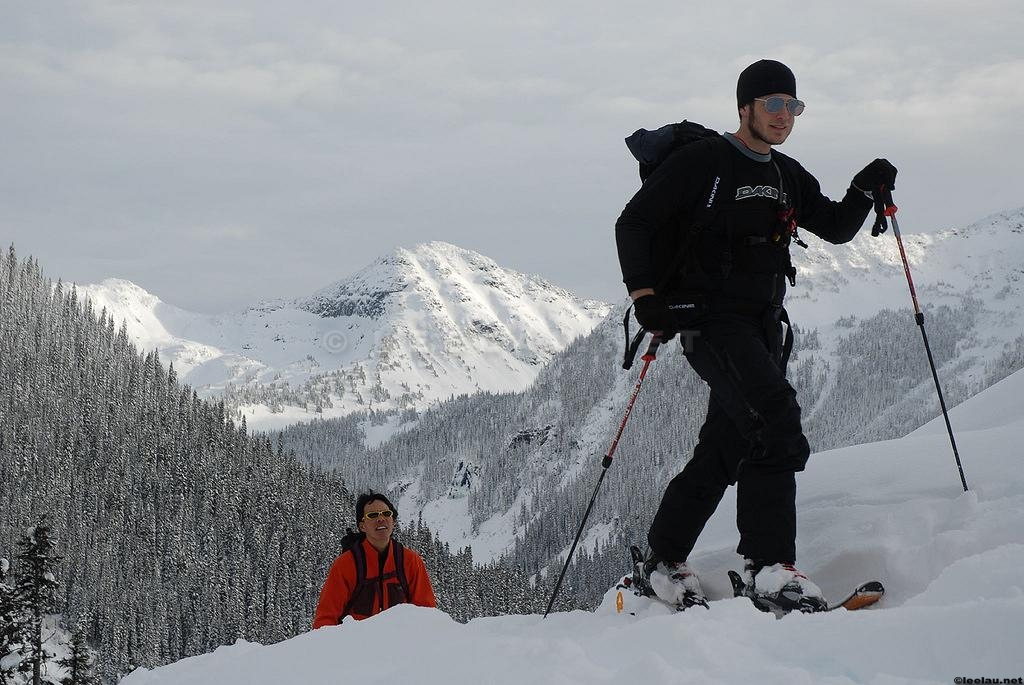 Morning stretch on the skin track up. At this point, it was still cold enough that the tree bombs weren’t releasing.

Then as we made our way up the creek, we all felt temps spike, bombs started releasing from the trees and pinwheels crept down the slopes around us. We made quick way to a safe zone in some mature timber. Here’s Pat looking longingly at the “Shooting Gallery” slopes. 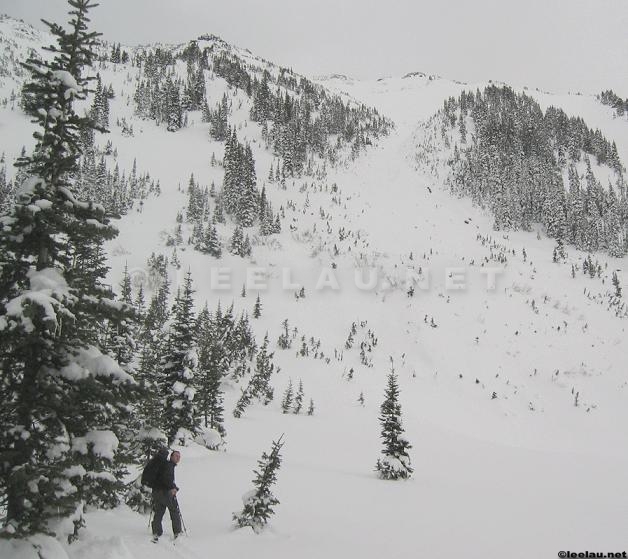 Some great views south of Jon and Lee towards Chief Pascall and the Joffre Group – look at the coverage in December! 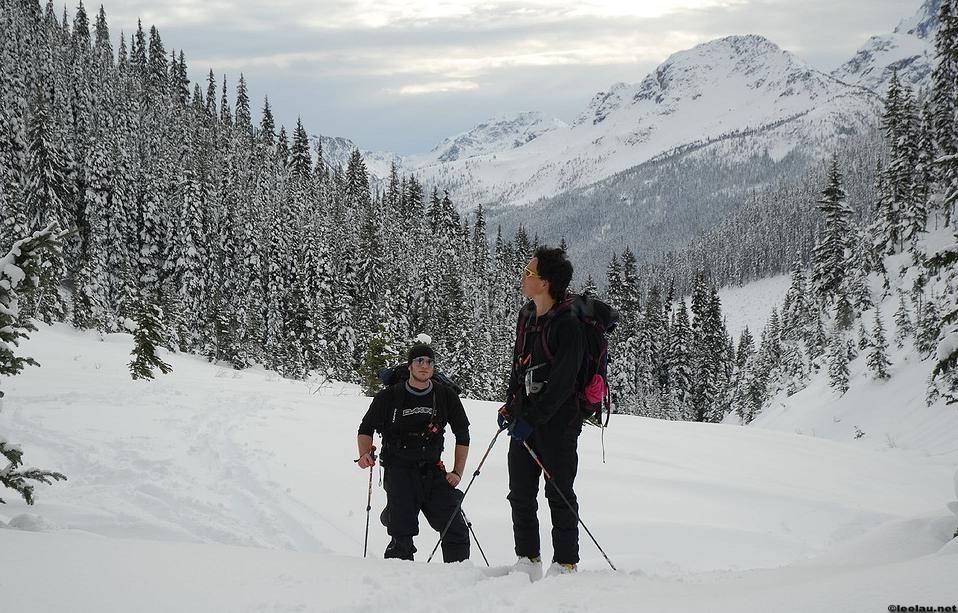 We got out of there pretty quick, went looking for slopes to ski that weren’t as high-consequence and got some pillow action. 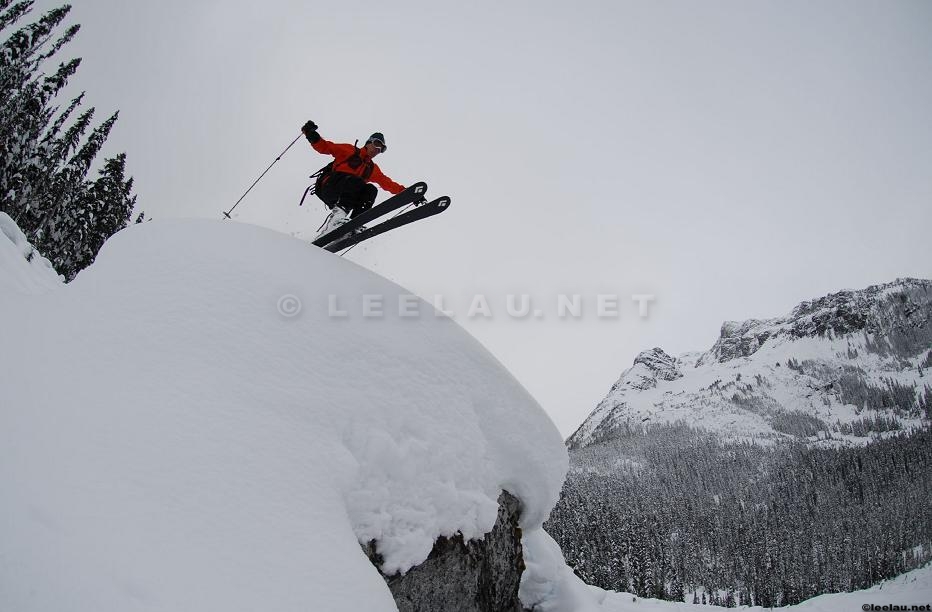 Pat – I don’t need no steenking helis to fly 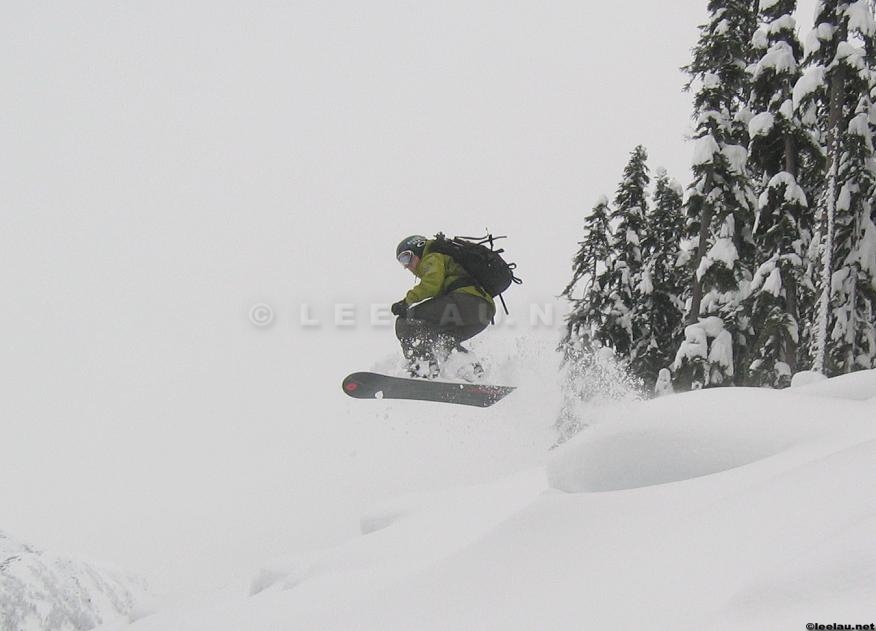 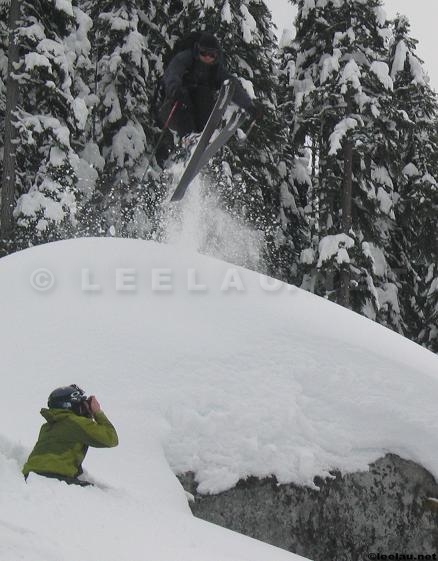 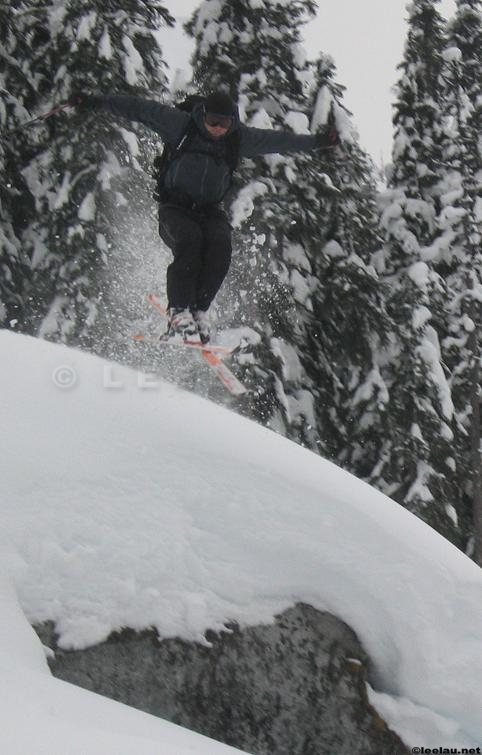 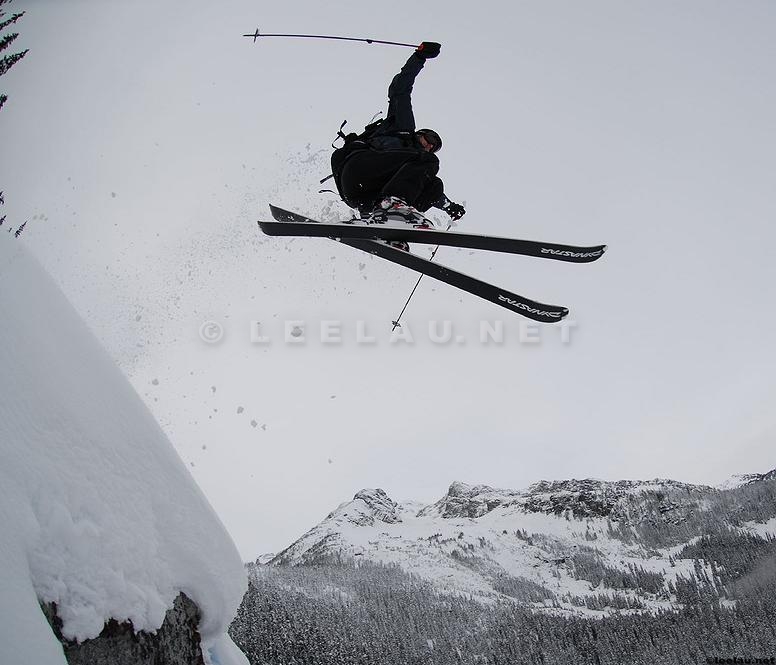 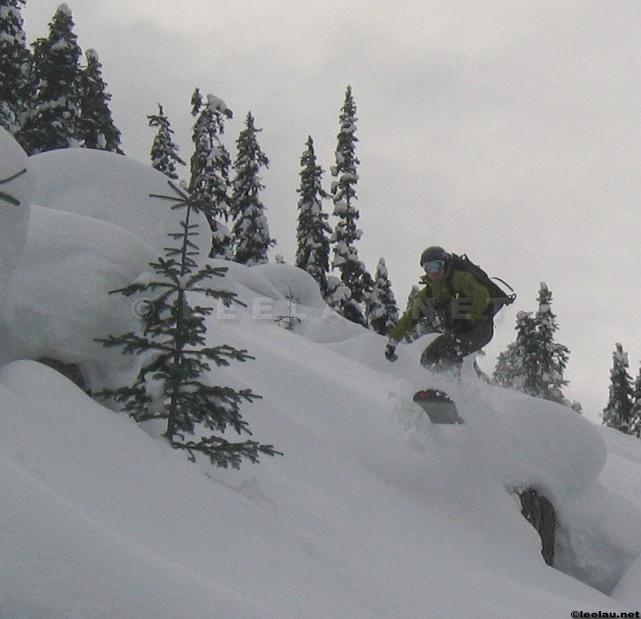 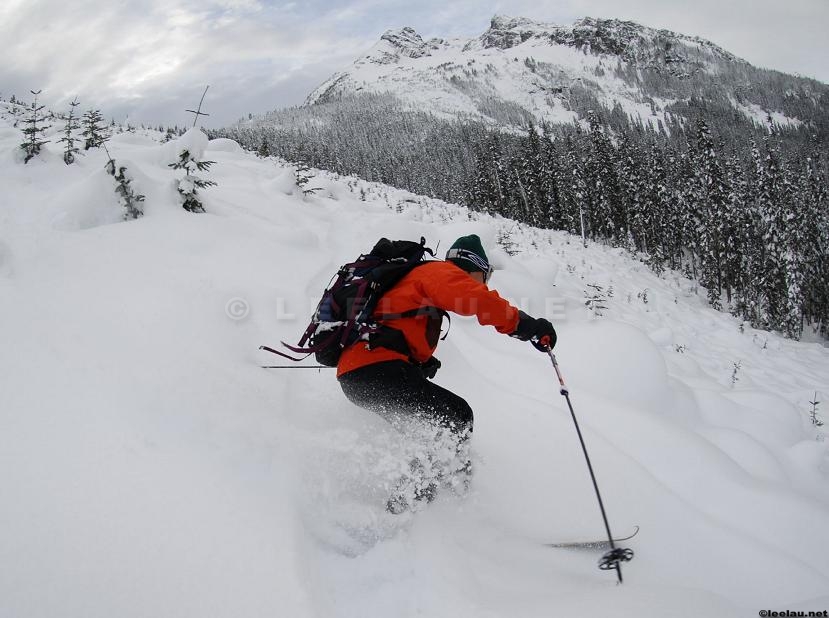 Pat in the pow – Rohr in the background 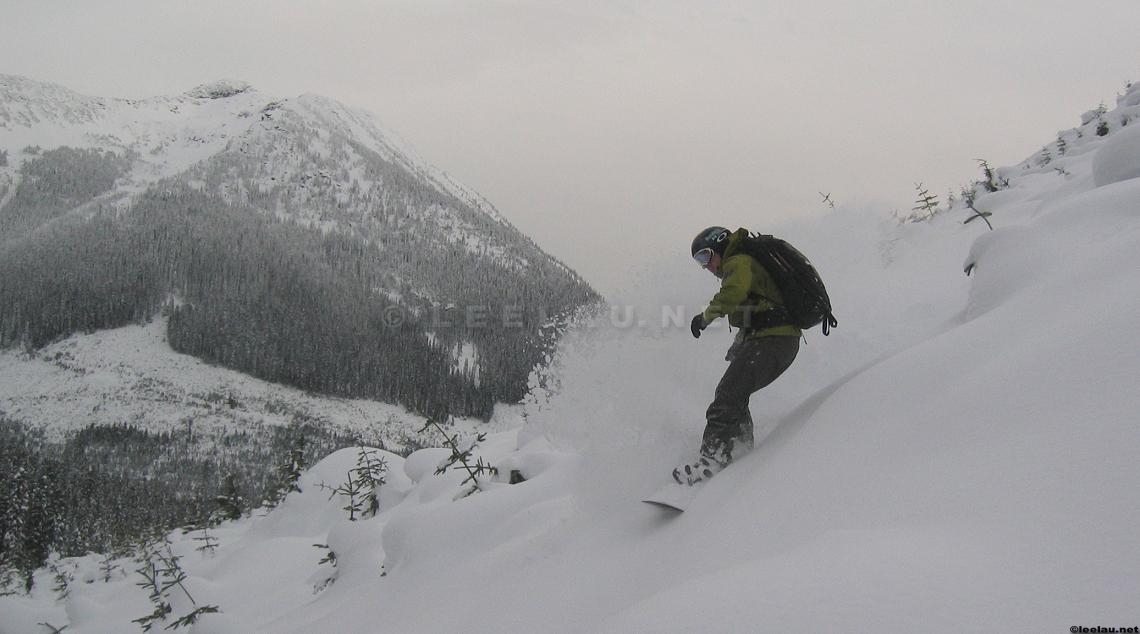 This entry was posted in 2006, ski and tagged Cayoosh, Duffey. Bookmark the permalink.