February 13 sees us “up Duffey” and on our way north of Whistler to Mt. Rohr. Described as a fairly tame backcountry area readily accessible from the Duffey Lake Road, it is an easy hours’ drive from Whistler. 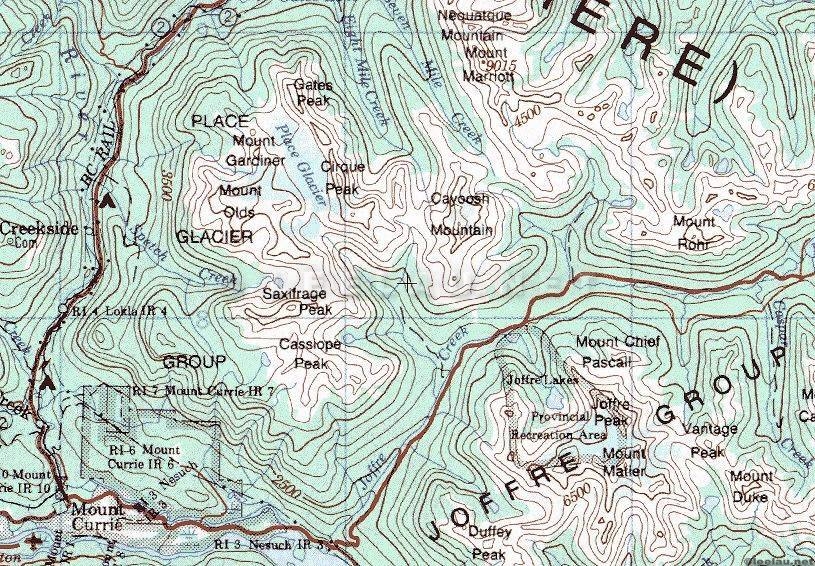 It’s socked in at Pemberton down in the valley. Happily as we drive up Duffey the cloud breaks a little and its just high-overcast with wispy stratus drifting in from the south as we’re on our way. There’s only a couple of cars at the trailhead and one party ahead. The snow is crunchy and dessicated on the mainly south-facing route in – understandable given the lack of snow in the past week and the recent warm weather.

The detailed map shows the route. Routefinding is easy even with the poor visibility and we stick to the safe route on the north side of the lake keeping clear of hazards on the cliff bands on the south side of the lake. Unfortunately the weather gets worse as we get to the east end of the lake and not being able to see much we decide to turn back, have some lunch and leave the summit for a next trip. 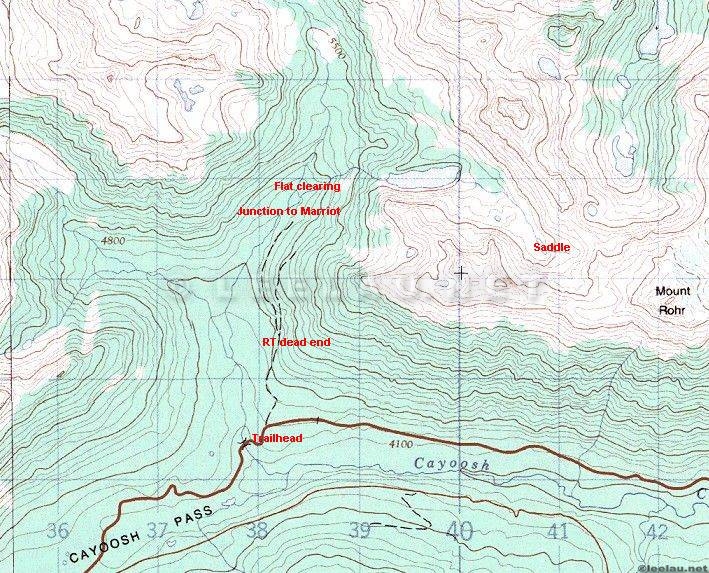 We’d thought this would be an uneventful tour; basically a ski-in and ski-out with the odd turn or two so turning back wasn’t such a huge disappointment. Then the weather starts clearing up and we find a nice slope to ski. Here is Peter on top of the slope with Marriot Basin/Alpen Meadows to west. 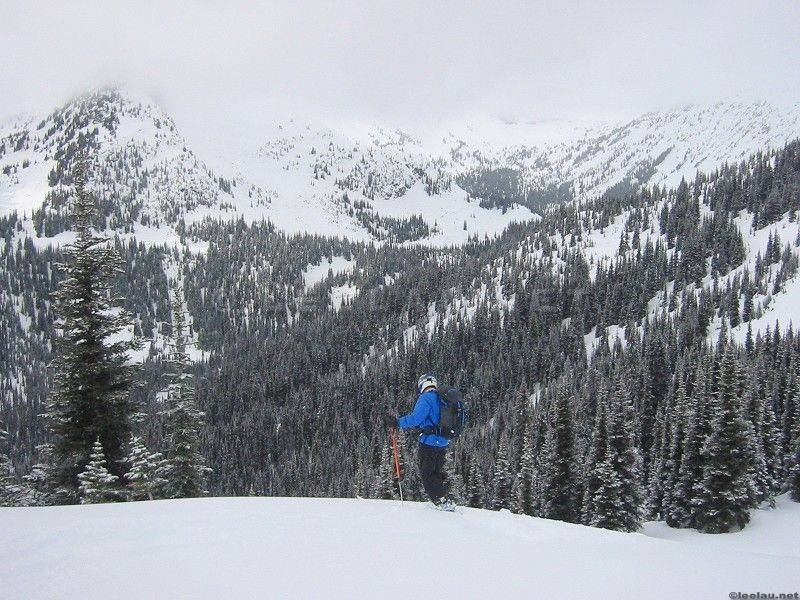 Sharon gets to go first! 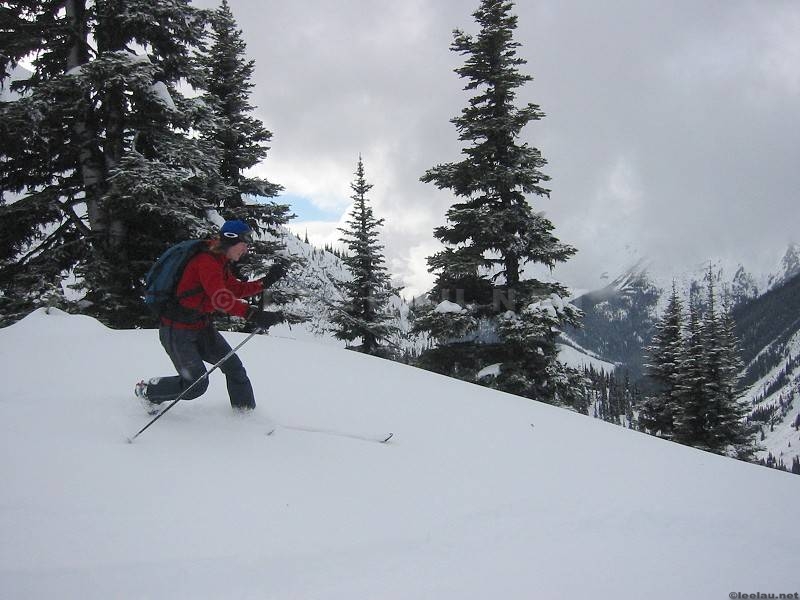 Sharon again. The snow isn’t bad considering how warm its been and considering it hasn’t snowed in about a week. It’s still knee-deep. Surprising that this slope hasn’t been skied and still yields fresh tracks.

I really like this picture of Peter in full flight trailing a rooster tail of fine white powder. 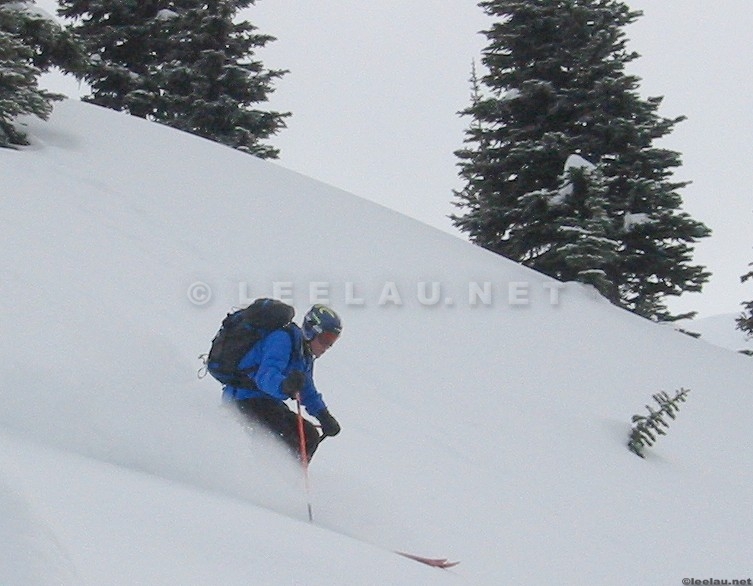 Sharon again on the next section of slope. It’s like this the whole way down; a nice grade – mayb 25 to 30 degrees through glades then opening up to a chute – a creekbed in summer – which gets steeper. 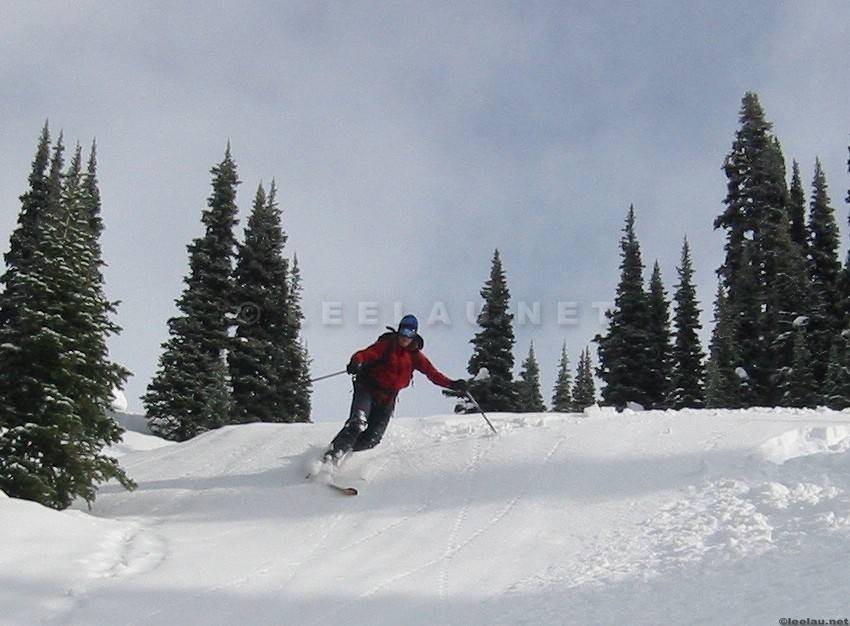 As we’re making our way down this pitch – maybe over the course of 20 minutes or so – the sun breaks out. 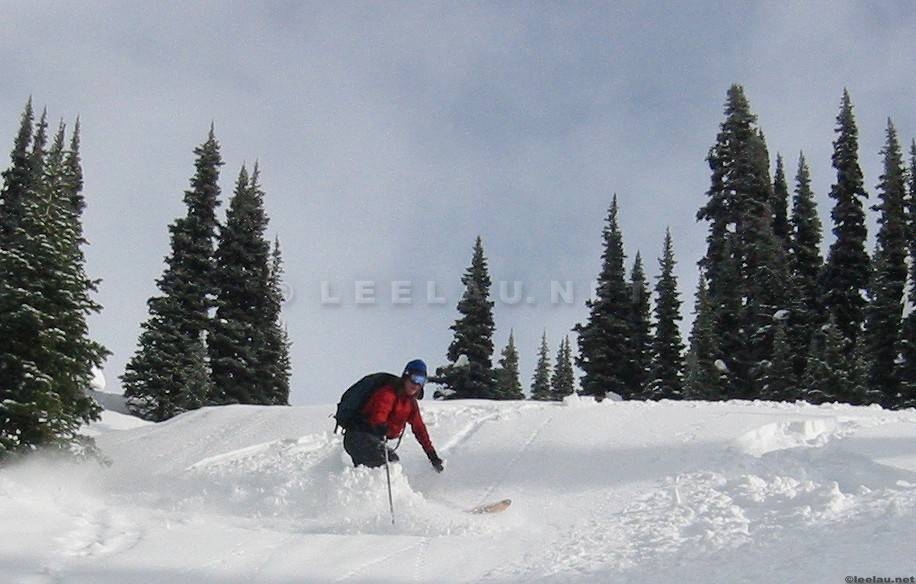 Parts of the slope are a little sun-baked. Here am I finding out that an oh-so-tempting snow pillow is actually a little ice-crusted. Ooooff ……… 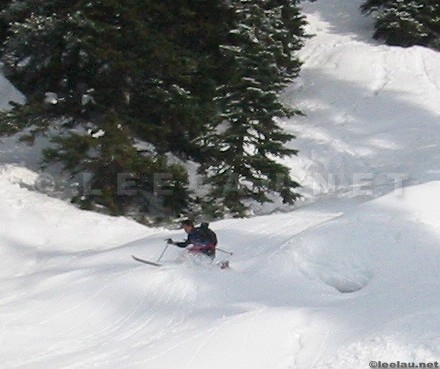 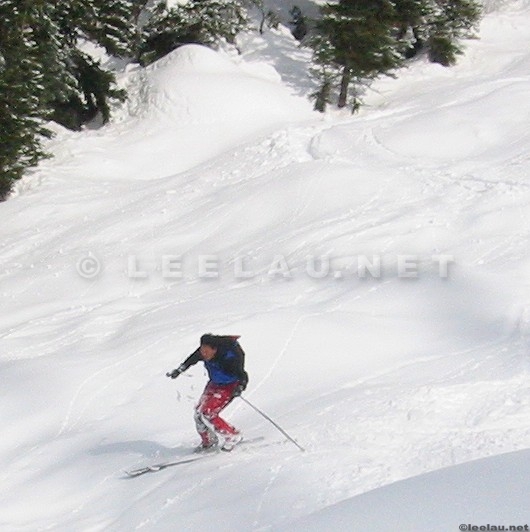 Its still early and there’s lots of daylight. Regretfully, there’s not quite enough daylight to make a summit attempt but there is more than enough light for another ski. Here are Peter and I are at the top preparing for another run. 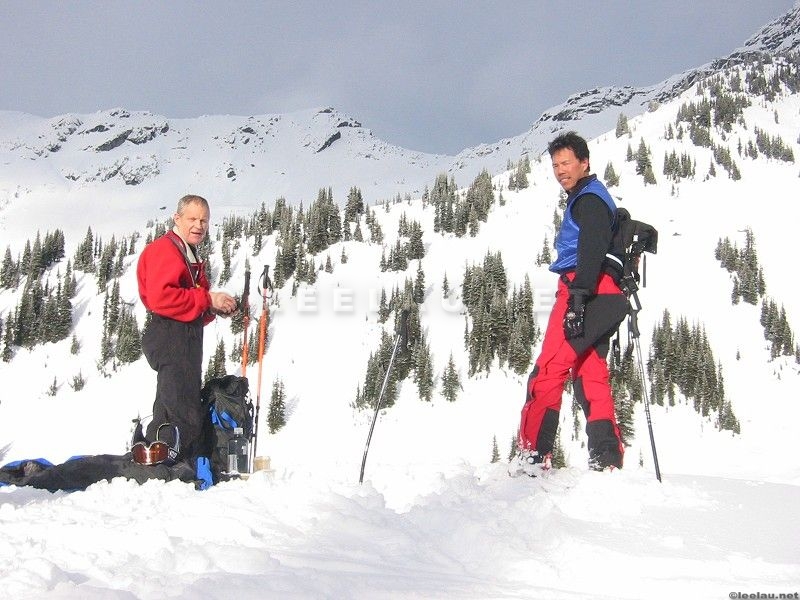 and down I go 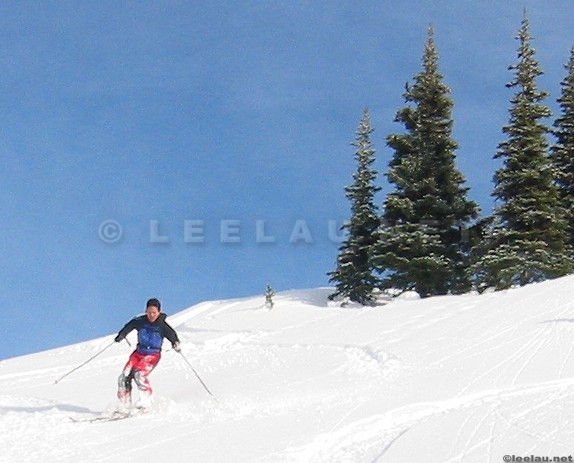 Nice sunny day; unexpected powder; what a bonus! Now if I could just remember not to drop the hands 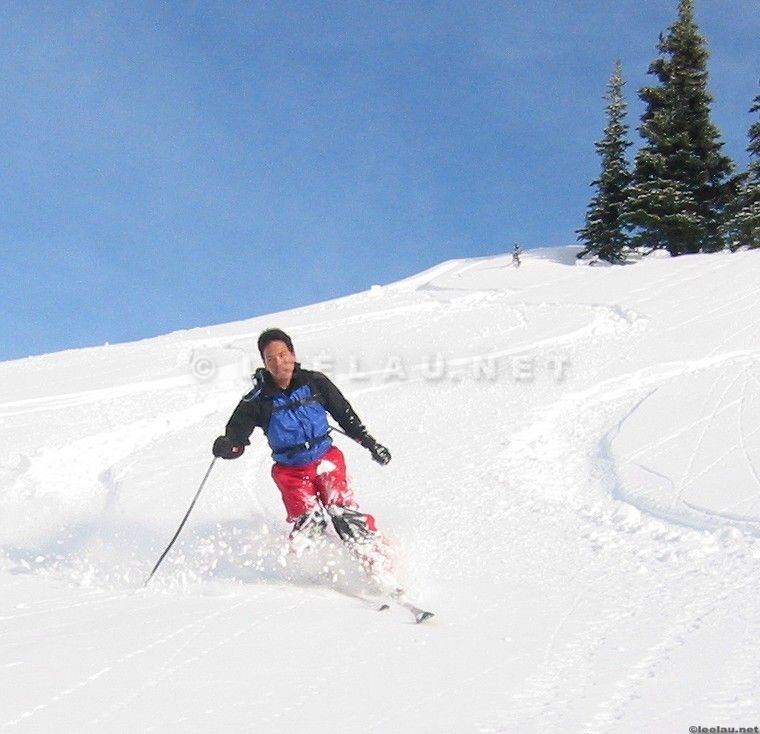 Peter goes next putting on a powder show for the camera 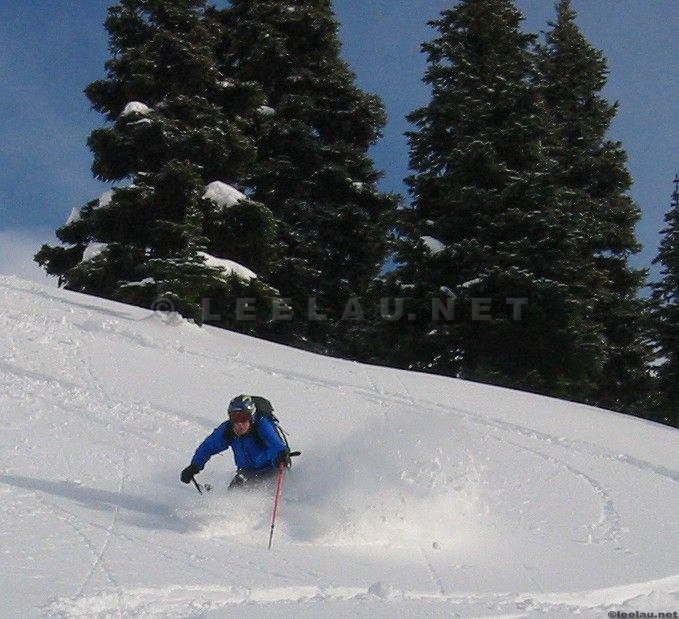 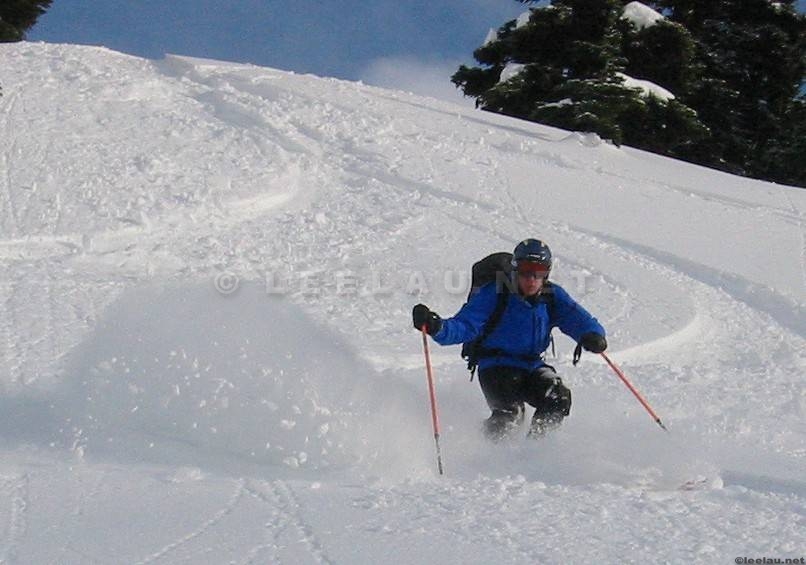 and yet more powder. Yes he could be your grandad yet he can kick your ass on skis 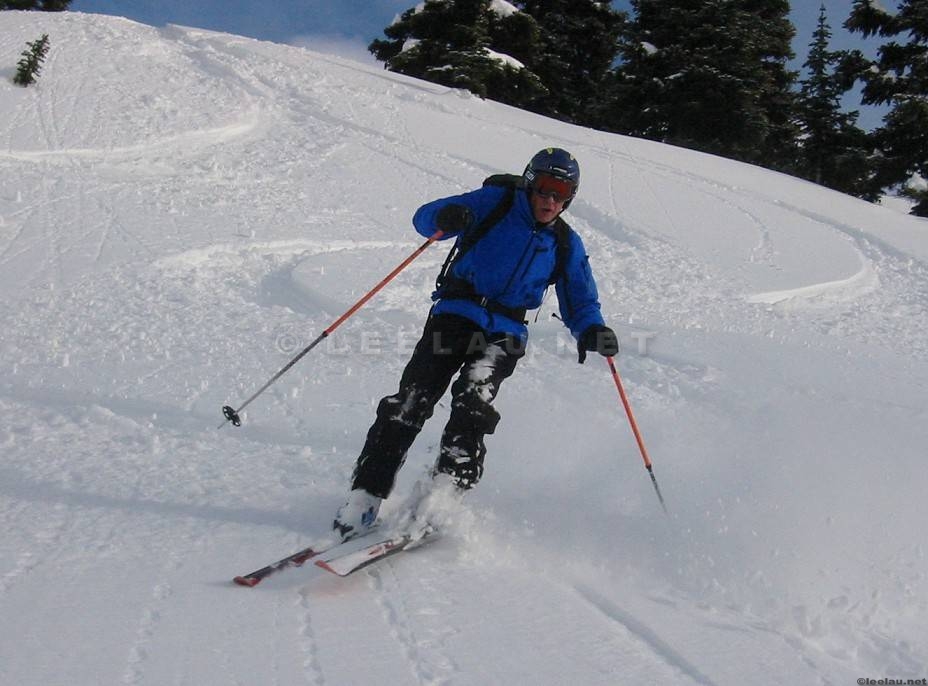 Its my turn again on this slightly steeper section. I’m not quite as elegant. 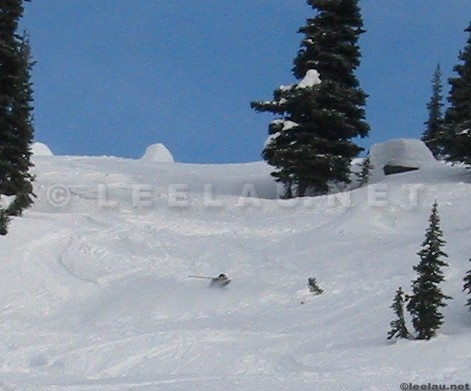 Happily, all landings today are soft. 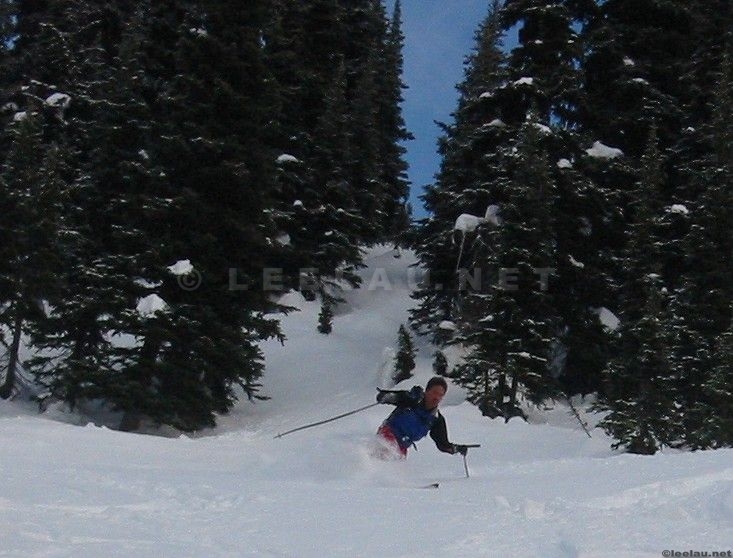 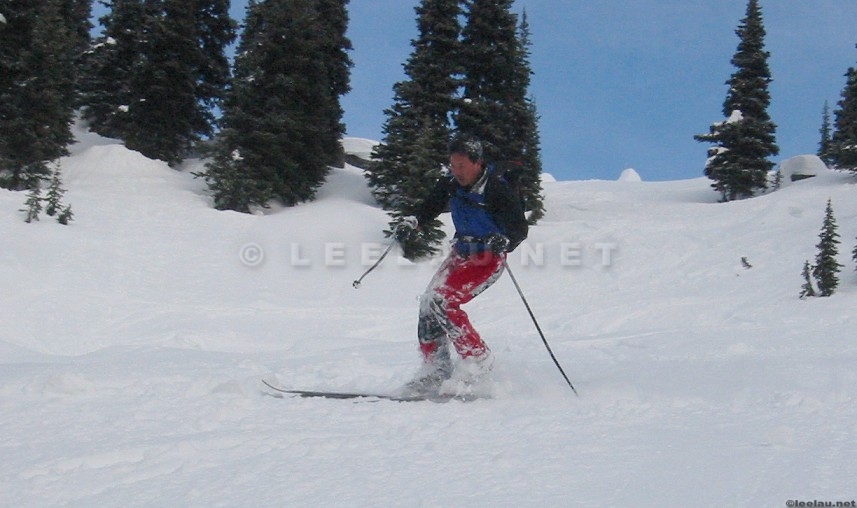 The slope we skied is from the west end of the lake to the flat clearing at the base of the creek draining from the lake. The ski-out itself is very simple if a little painful due to the unforgiving nature of the ice crust on the lower trails. It takes about an hour to ski out. With the clearing skies, this time there’s a magnificent view south towards Matier and Joffre.

This entry was posted in 2004, ski and tagged Duffey, rohr. Bookmark the permalink.