We have ridden before in the Chiwawa area of Central Washington. When we last visited in early summer of 2003 snow lay in the upper alpine so we had stuck to lower trails. I had been fascinated by the idea of visiting that area and exploring some of that sweet singletrack. So when Monte told us about some rides he planned to explore in this area it didn’t require much convincing for us to make the long drive.

The ride to Klone Peak is best described in the BBTC website writeup here. At 6820′ in elevation it’s the tallest peak in this drainage. The map below shows the general Entiat area. The quickest way to get there is via Highway 2 over Stevens Pass. 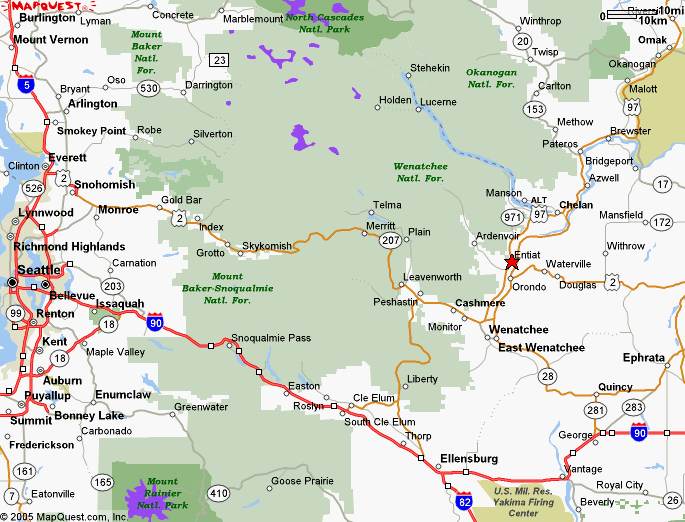 A detailed map of the route we took is here. We also had topographical maps; compass; GPS etc with us. The route looks deceptively short on this map. 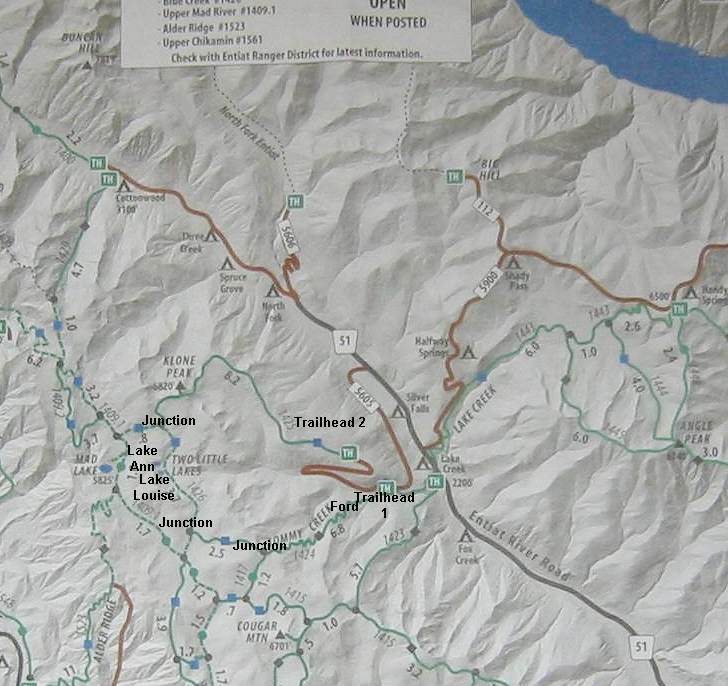 We stayed at the Lake Creek campsite. There weren’t many people there and the campsites were very private; with running water and outhouses. The best thing was that once we were parked we didn’t have to move the car for the two rides we planned that weekend. 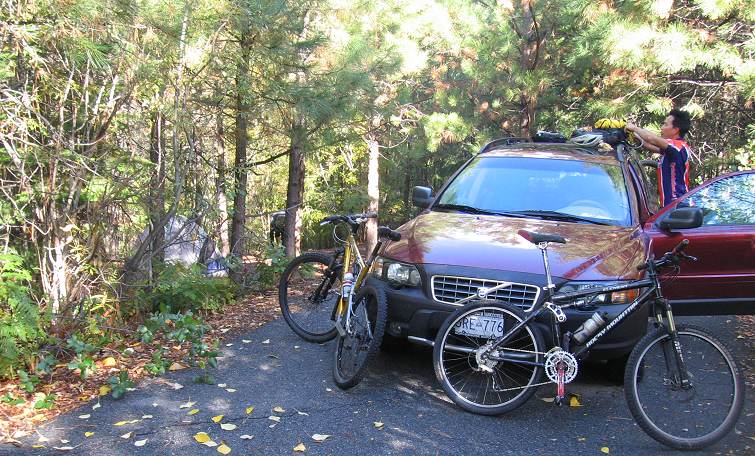 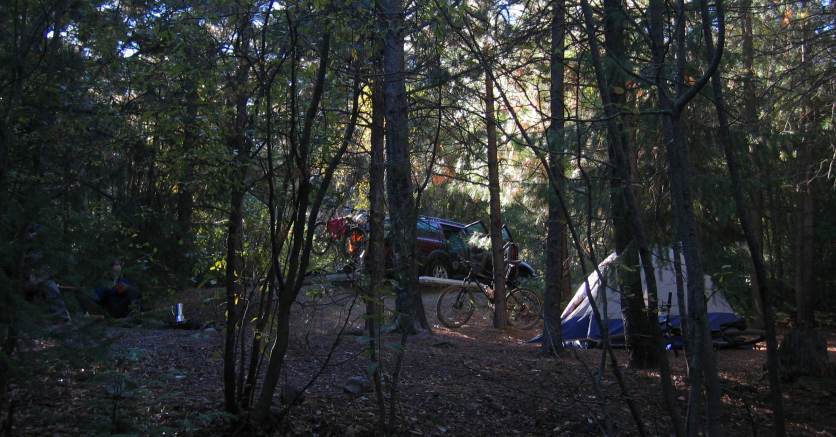 We had planned to wait for one other person to join us (Jeff where were youuuuu????) but due to some confusion he never stopped by the campsite to meet us. So we started up the trail to the trailhead I marked on the Chiwawa map as Trailhead # 1. It seems like a little climb on the map – starting at the campsite at 656m and going up about 3km to 820m. But its a loose sandy slog that saps the energy out of your legs. Soon Monte forges ahead. What are we in for?

This view shows the view east (picture left) to south (picture right) down the Entiat Creek drainage. In the background are the Lake Creek trails which we will ride tomorrow.

Here is Trailhead 1 where we find Jeff’s car. There’s no note on it but the engine is still warm. Later we find out that he was almost 1 hour ahead of us so there was no chance we could have caught him. 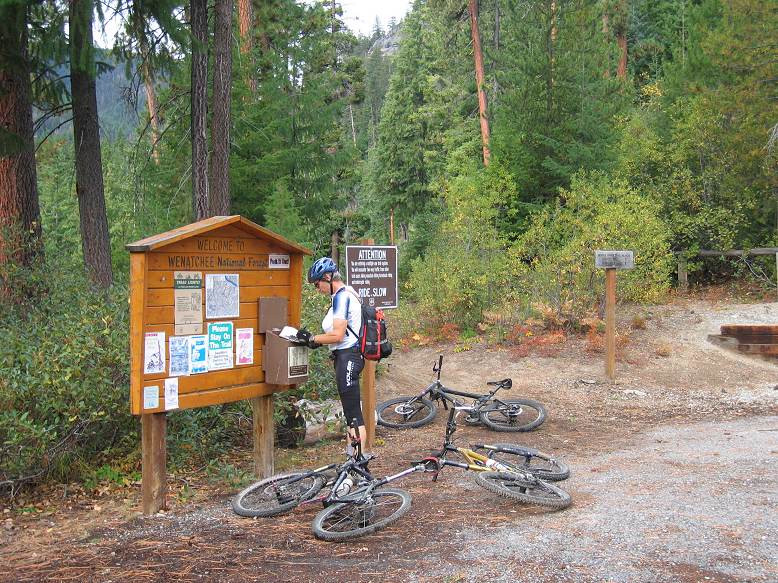 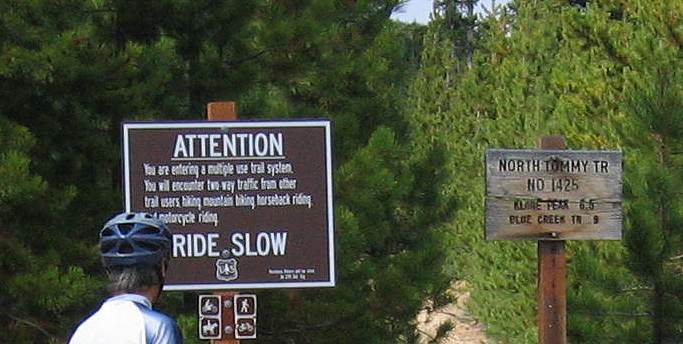 After a grind up a paved road we reach Trailhead 2. We run into a bunch of dirtbikes; this route is shared with many users so keep your heads up. Most of them were very nice except for some throttle cowboys who thought they were Mad Max. Later we find out that they were on a poker ride. Must have been some serious stakes for them to be quite in that much rush.

The climb up to the ridge approaching Klone Peak proper switchbacks through some burnt forest. It makes for great views.

Thie picture below shows a heli-pad at approximately 1800m. It has a view to Mount Kelly to the south-west (not in picture). This view looks to the north east. 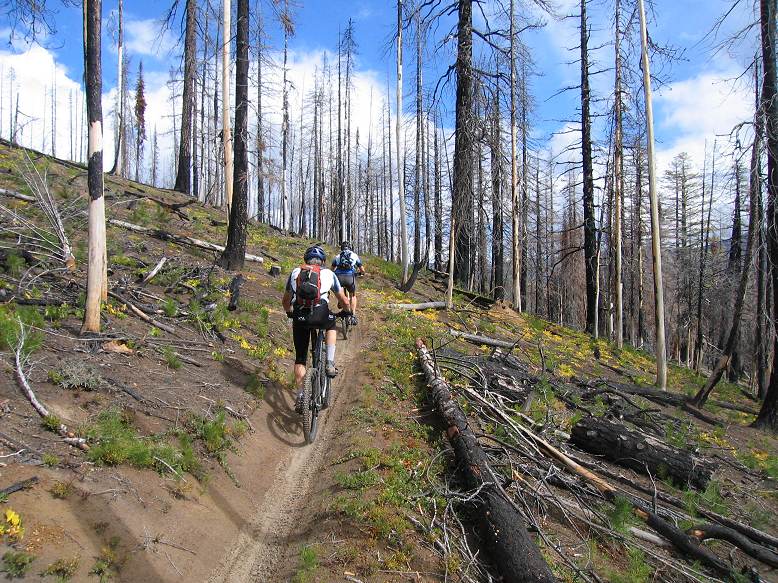 The climbing is loose and sandy. You really have to pay attention or you’ll blunder off the trail – just like me. 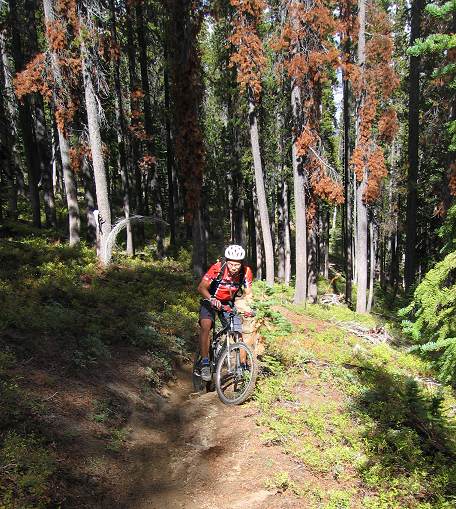 After you reach a false summit at about 1900m you descend again and lose about 100m. Then you start your approach to Klone Peak proper on this gorgeous benchcut trail. Fall colours are just starting to hit but so is oxygen deprivation for us sea-level dwellers. 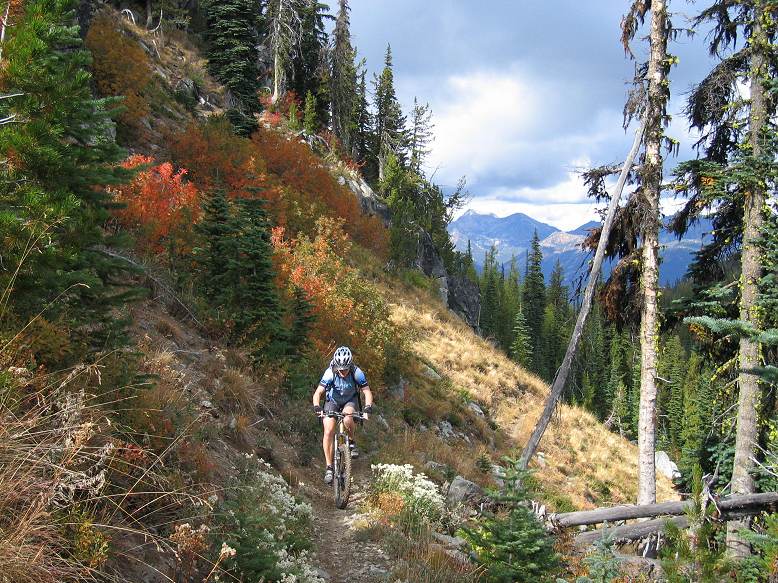 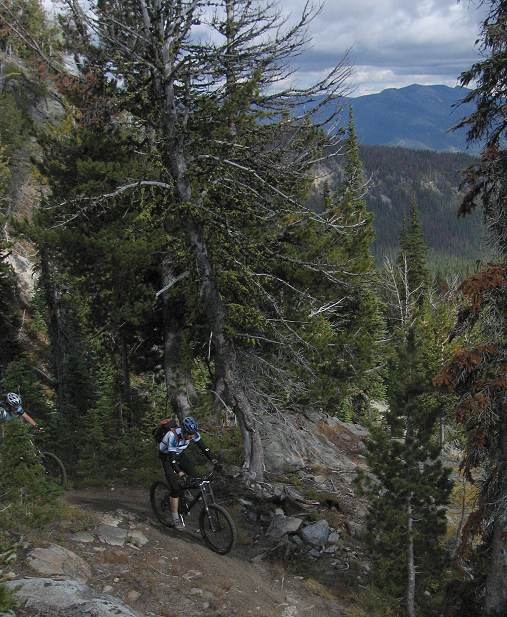 Finally we reach the turn off to Klone Peak and after one last grind we’re up! Now its time to enjoy the burritos that Monte and I hauled all the way up here. Its one of my greatest joys whenever I travel in the US to gorge on Mexican food.

This picture below shows a panoramic view from Klone Peak looking roughly north to west going from picture left to right. I wish I knew the area well enough to name peaks but I can barely name ranges. Note the dark clouds and rain in picture centre falling in the valleys south of us. We never did get rained on thankfully.

After the long slog up Klone Peak; we are rewarded with smooth descents. Many of these trails are maintained by motorcyclists and dirtbikers love bermed, swoopy singletrack.

Its rained recently too so the trails are in gorgeous shape. They’re fast and you feel like you’re riding a jet bike out of Return of the Jedi ducking around trees going as fast as you can.

The views are pretty nice too. Here’s Sharon riding past some red fall coloured meadows. 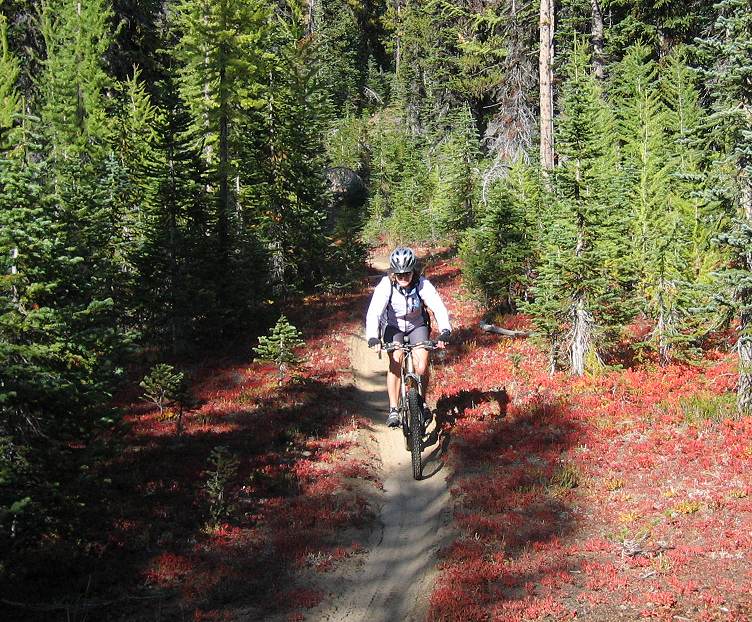 I am a sucker for fall colours. 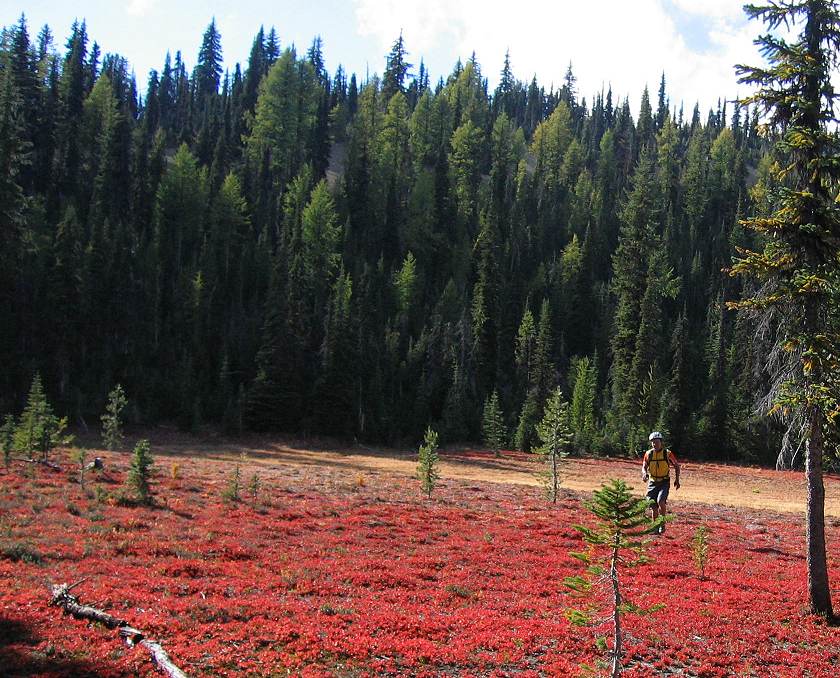 Instead of doing the big loop to Mad Lakes; we take the turn off to Two Little Lakes. It’s with some surprise that even with all this descending, we’ve only lost about 300m from Klone Peak! Somewhere there’s still another 1600m or so to go!

We start our descending again at the lakes. Lake Ann is the first lake. 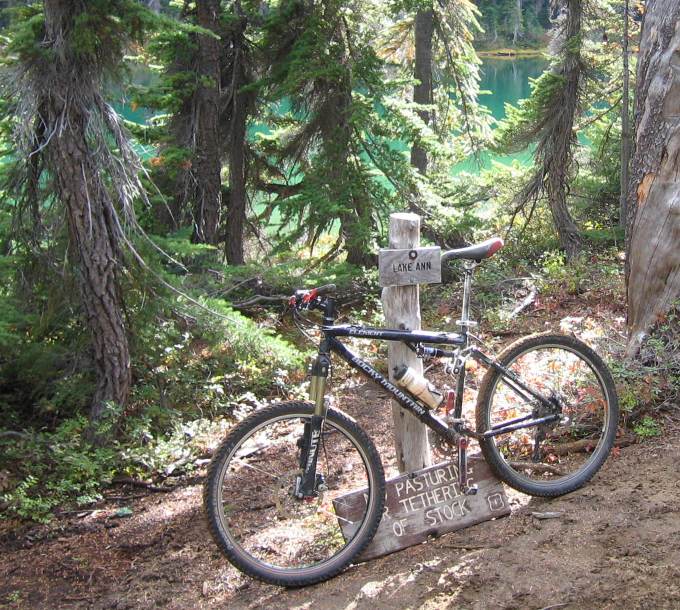 Lake Louise is the second lake.

Shortly after Lake Ann is another sweet section of bermed downhill goodness. Then you hit a 5 km climb gaining another 100m or so all the way back to 1800m. Now the real descending starts as you go down the south fork of the Tommy Creek. I scare myself by following Monte for a bit (NOTE TO SELF – Do not try to keep up with the experienced local on his own turf). After a couple of diggers into the soft sandy soil on the side of the trail I back off on the speed a little.

This picture shows a typical section of trail. Bermed and buff. Its very very hard not to go mach schnell every second you can. 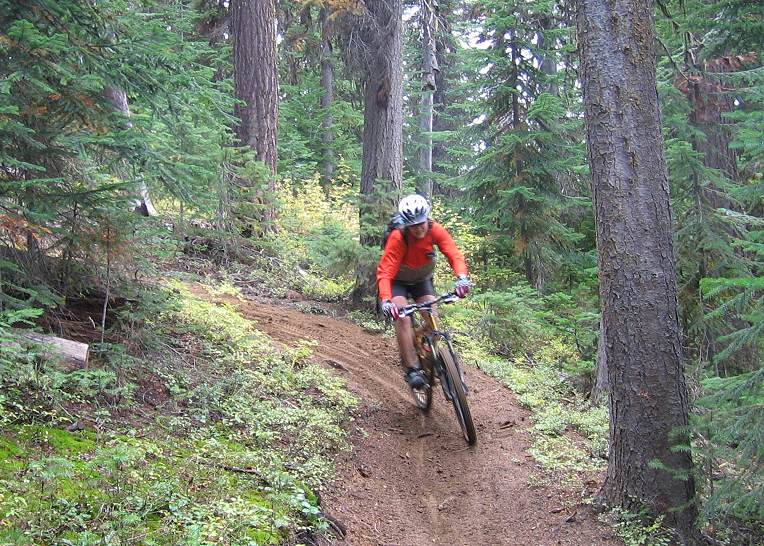 Monte carves … the man is smoooooooooth. 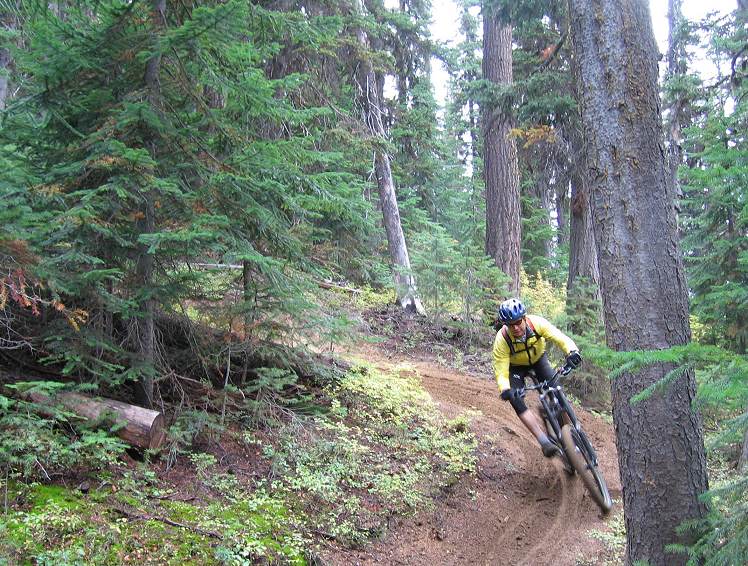 Finally we get to the bottom – disc brakes glowing a dull red. Even at the end of the summer its a little tricky fording Tommy Creek. Then there’s a short bike and push back to Trailhead 1 and then back down the sandy uphill from hell – which is now the sketchy sandy downhill from hell. Back to the campsite! 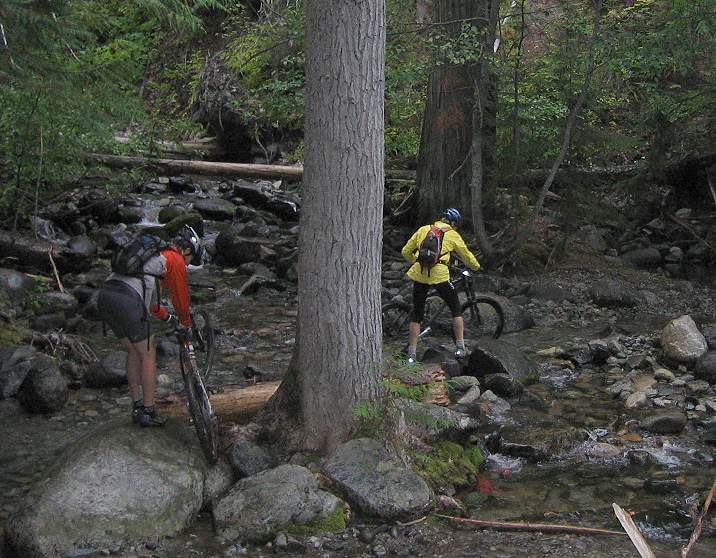 Total distance covered was 43.8km with 1965m of climbing. We were out there for just a little over 8 hours making for a long day! Note the sensor malfunction at 42km so that descent is read but no distance is displayed.

This entry was posted in 2005, bike and tagged chelan, eastern washington, entiat. Bookmark the permalink.