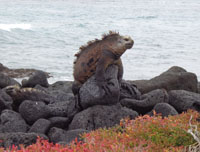 Isabela Island is the largest, one of the youngest and one of the inhabited islands in the Galapagos. The early inhabitants were fisherman and farmers. More recently they are catering to tourists with restaurants, hotels and tours. The town of Puerto Villamil sits on the Southern coast, about 2200 people live here, it has a small airport and sees some day trips from Cruises and Santa Cruz. This is a mixed blessing as the small laid back nature of the town gives it it’s charm. Further growth would destroy that. Hopefully they will be able to find a balance between the opportunities of tourism and their nascent charm.

Another feature that was really cool was the Iguana Crossing. There is a lagoon separated by the main street to the Ocean. The Iguana’s hang out in the Lagoon at high tide and go to the ocean at low tide. Even the police stop for the Iguana’s!

Other attractions are Negro Sierra the most recently active shield volcano that erupted in 2005 for 10 days and created a crater 7.2kmX10km wide. It rises to 1124m. You can see the crater and nearby volcanoes with a guided tour. You cannot hike in this area without a guide. I found the guides to be quite useful and informative so it’s worth having them with you.

Isabela island was home to an American Naval base during the second world war, this location was then used in 1946 as a prison ‘camp’ where 300 prisoners were kept busy creating the ‘ wall of tears’ a giant rock wall with no purpose…

A tortoise breeding center is also here and can be easily walked to buy the Lagoons on the west side of town. The tortoises here are from locations around the island and will be relocated once big enough.

A popular local swimming spot, Concha De Perla, is about a 10 minute walk from town. It’s a popular swimming location for the locals and great place for tourists to get some snorkling in.

There are no banks in Puerto Villamil so bring all the cash you need to do what you want to do there.

We got to Puerto Villamil on a Cessna from San Cristobal on Emetebe airlines. This flight goes if there are enough people to justify it. We went from Puerto Villamil to Puerto Ayora on Santa Cruz on the local ferry system for $25.00. The boats leave at 6:00am or so and it takes just under 2 hours to get to Puerto Ayora. We bought our tickets ahead of time to ensure we had a spot on a boat.

We stayed at La Casa De Marita which is right on the beach, offers a descent breakfast that is included with your room. They also serve dinner at night. Dinners at all the restaurants were similar, pretty basic and hit the spot. Rice, some meat and vegees. Pasta was also common. We paid the tourist prices of between $10.00-$15.00.

We are up early for breakfast and leave La Pinta before anyone else is up. Here’s Carlos making his own breakfast before taking us to the airport. 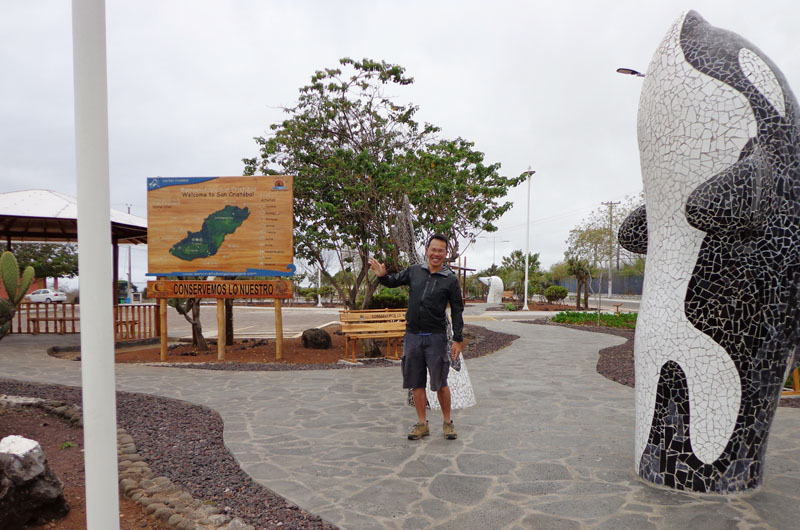 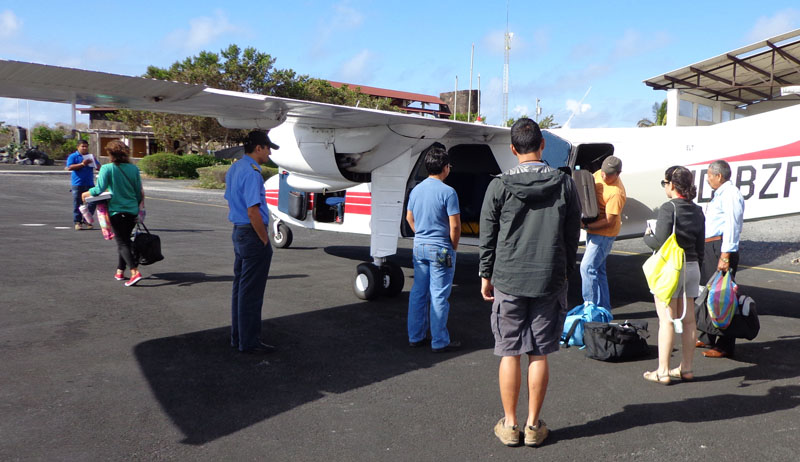 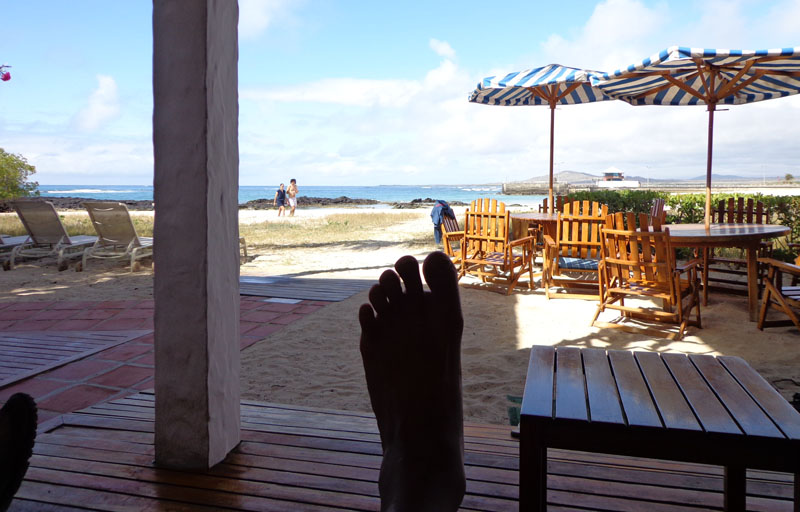 This is our front yard! 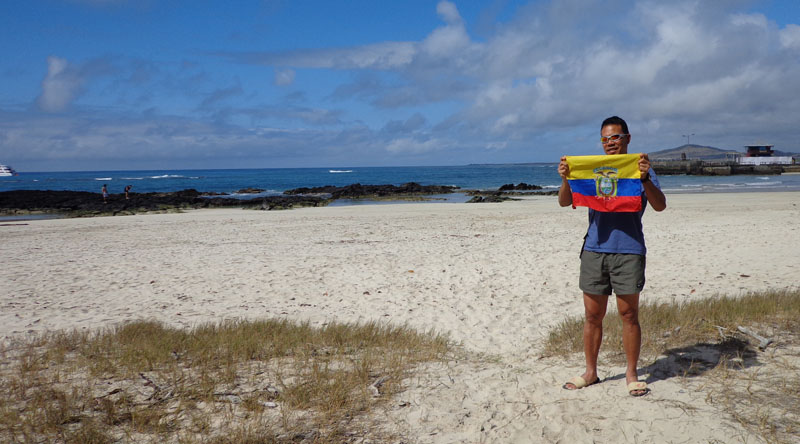 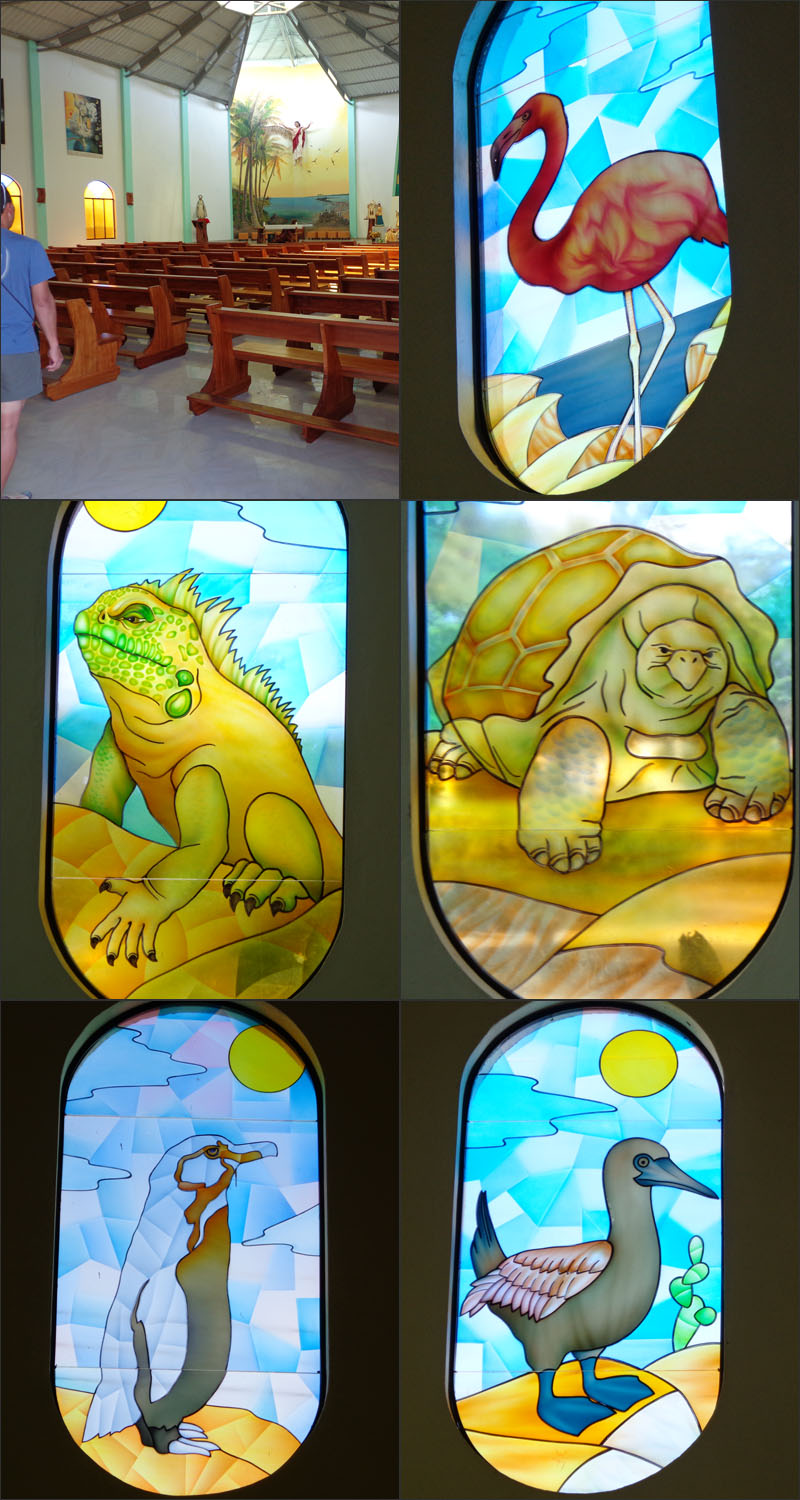 Bar de Beto – a pretty cool bar on the beach 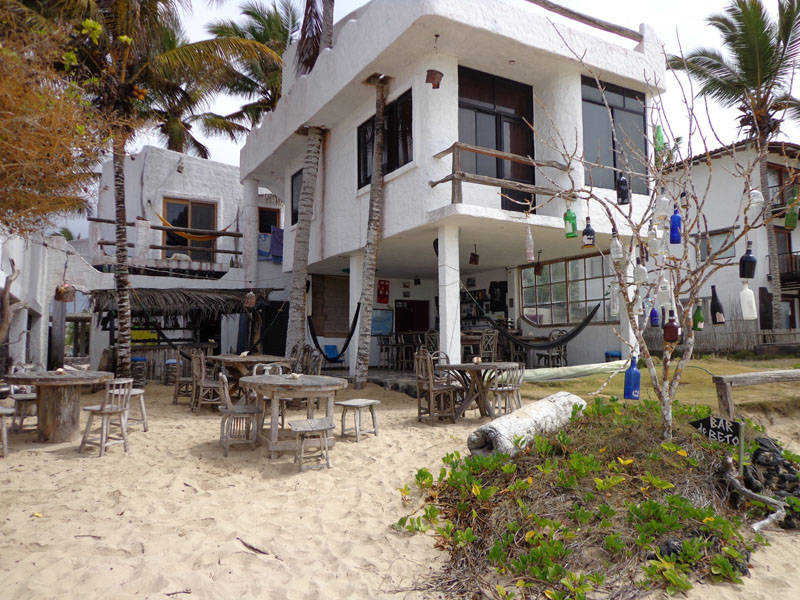 On the west side of town is the Iguana Crossing! The only controlled intersection. Pretty cool to see the Iguana’s line up to cross the street. 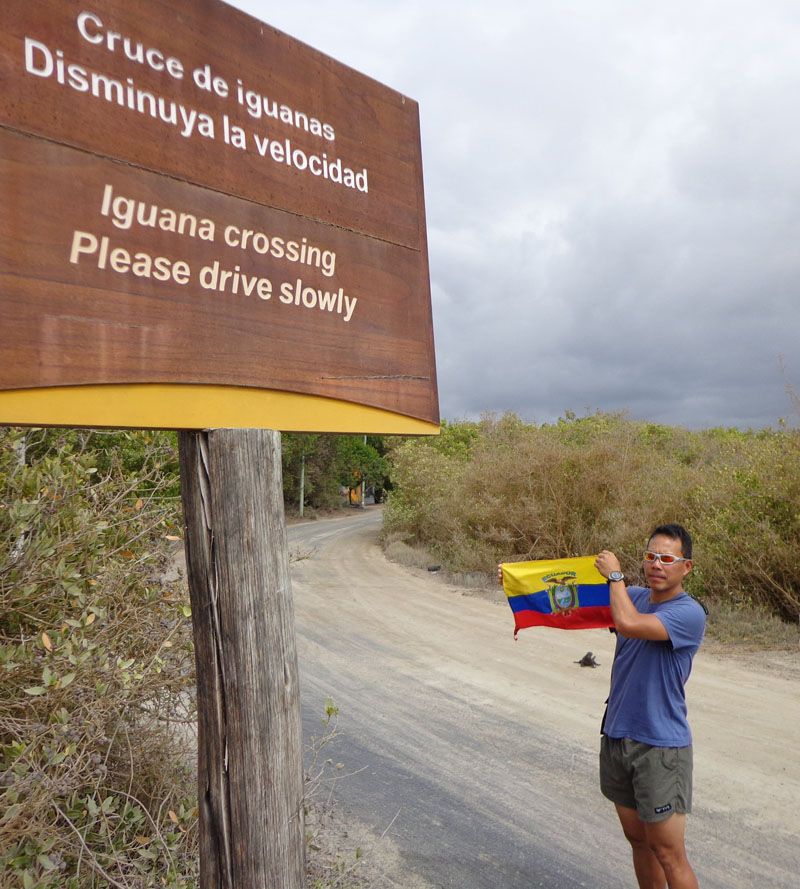 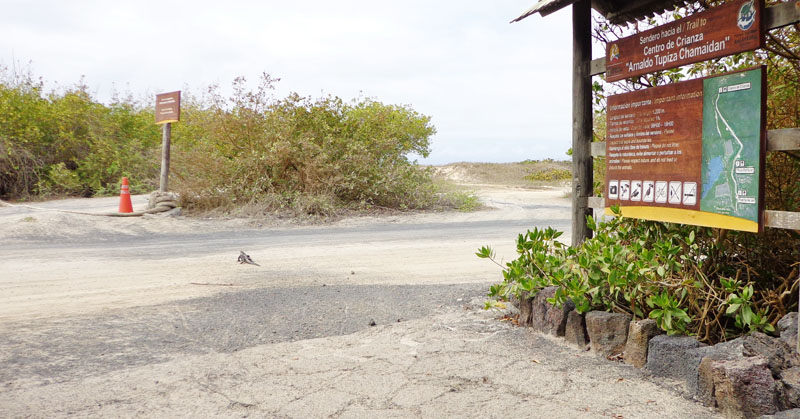 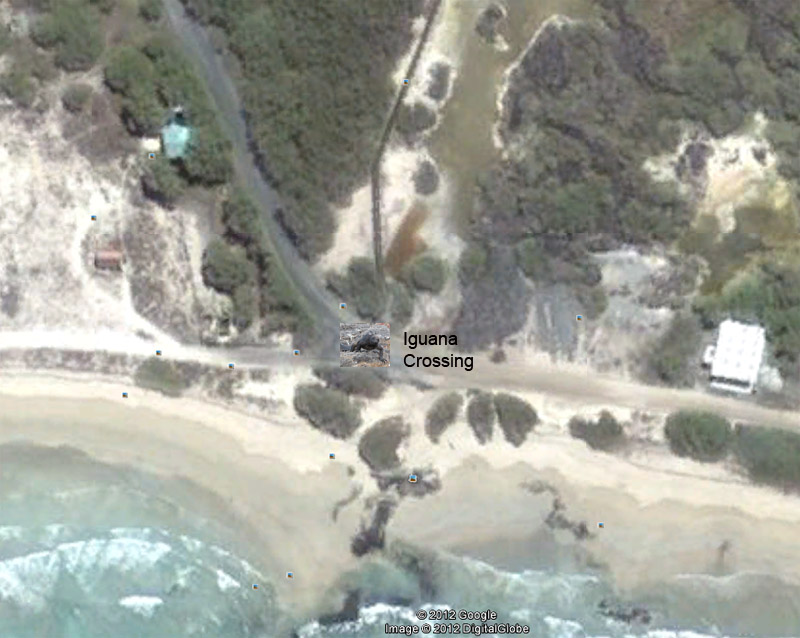 We walked up Centro De Crianza, a boardwalk along the Lagoons to the Turtle Breeding area. Along the way are the Manzanita trees, and lagoons filled with Flamingos, common stilts, whimbrels, bahama pintails, and gallinules that come here to sweep the mud in search of brine 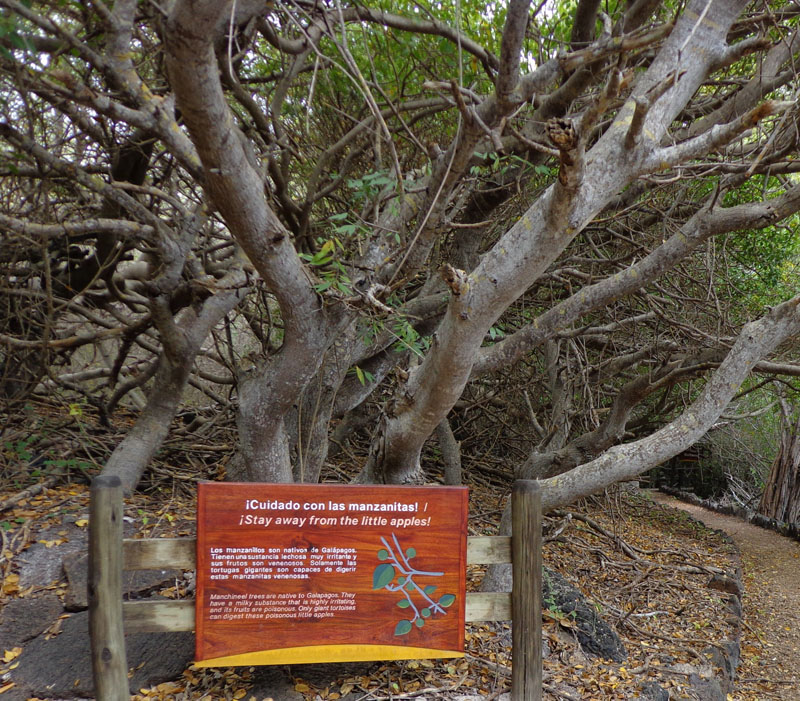 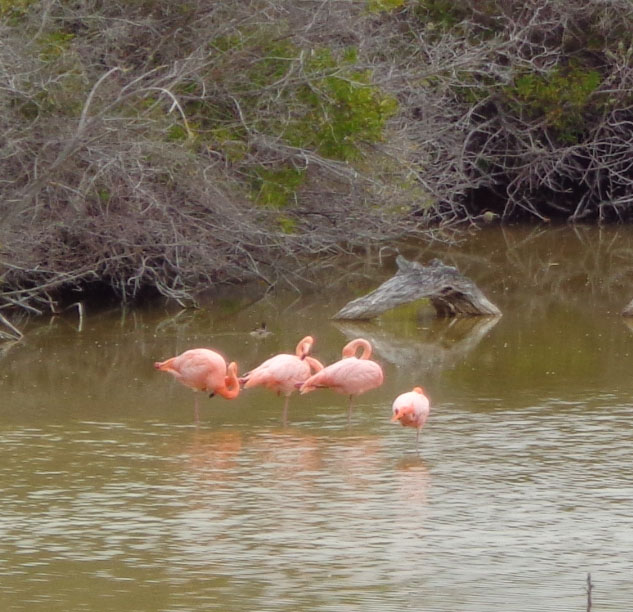 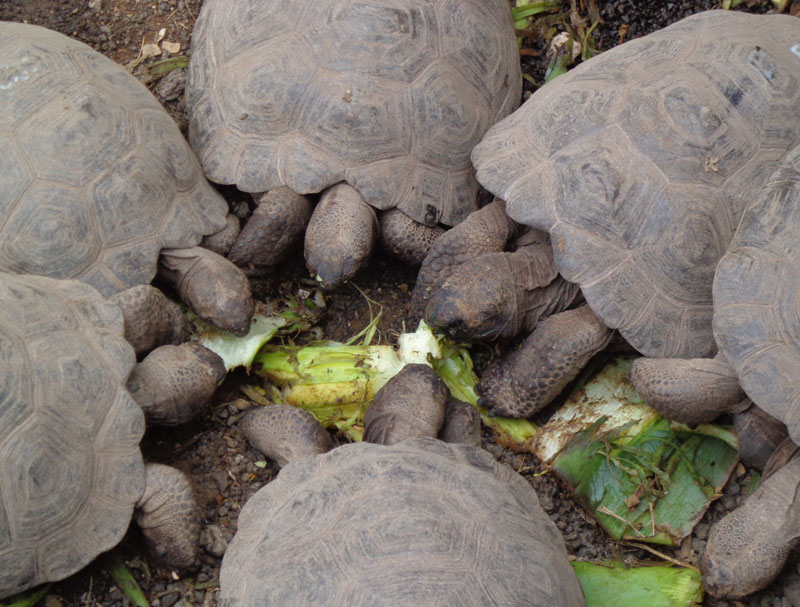 These guys were getting aggressive by the water cooler! 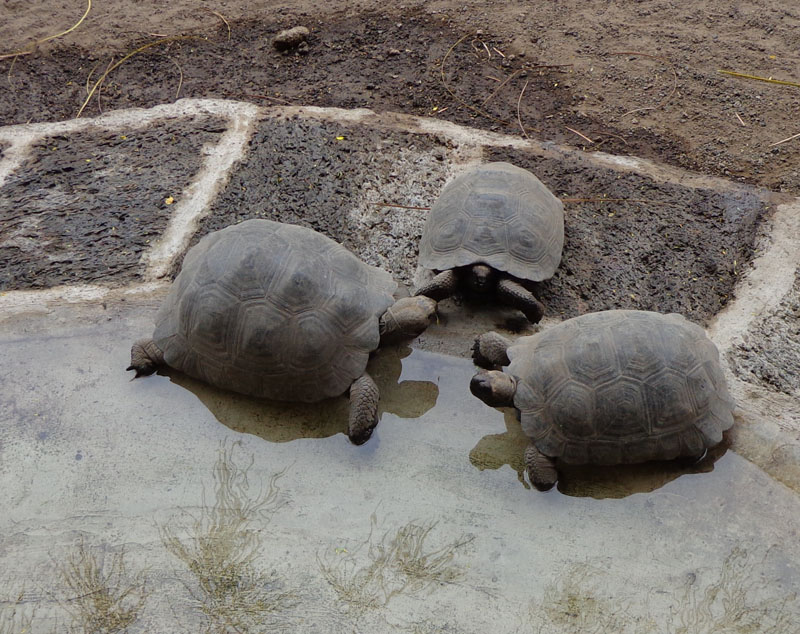 The map of where these tortoises were from 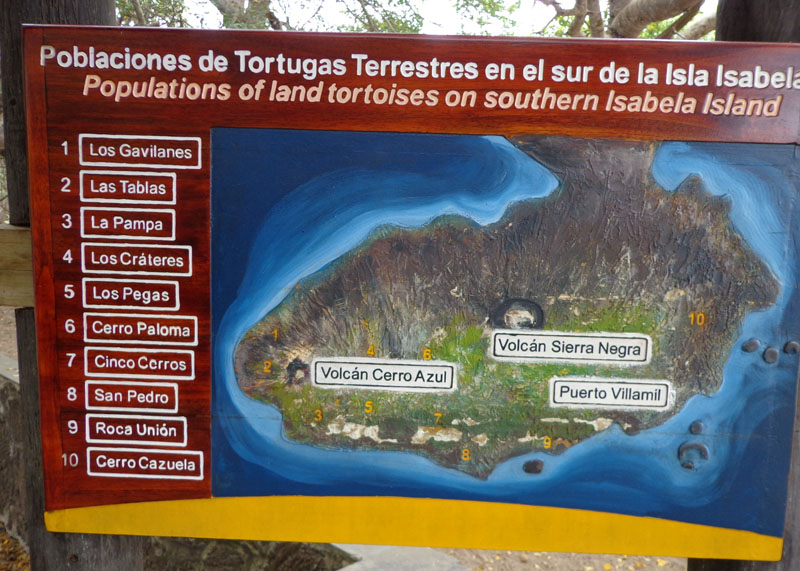 Then back to watch the Iguana’s cross the road 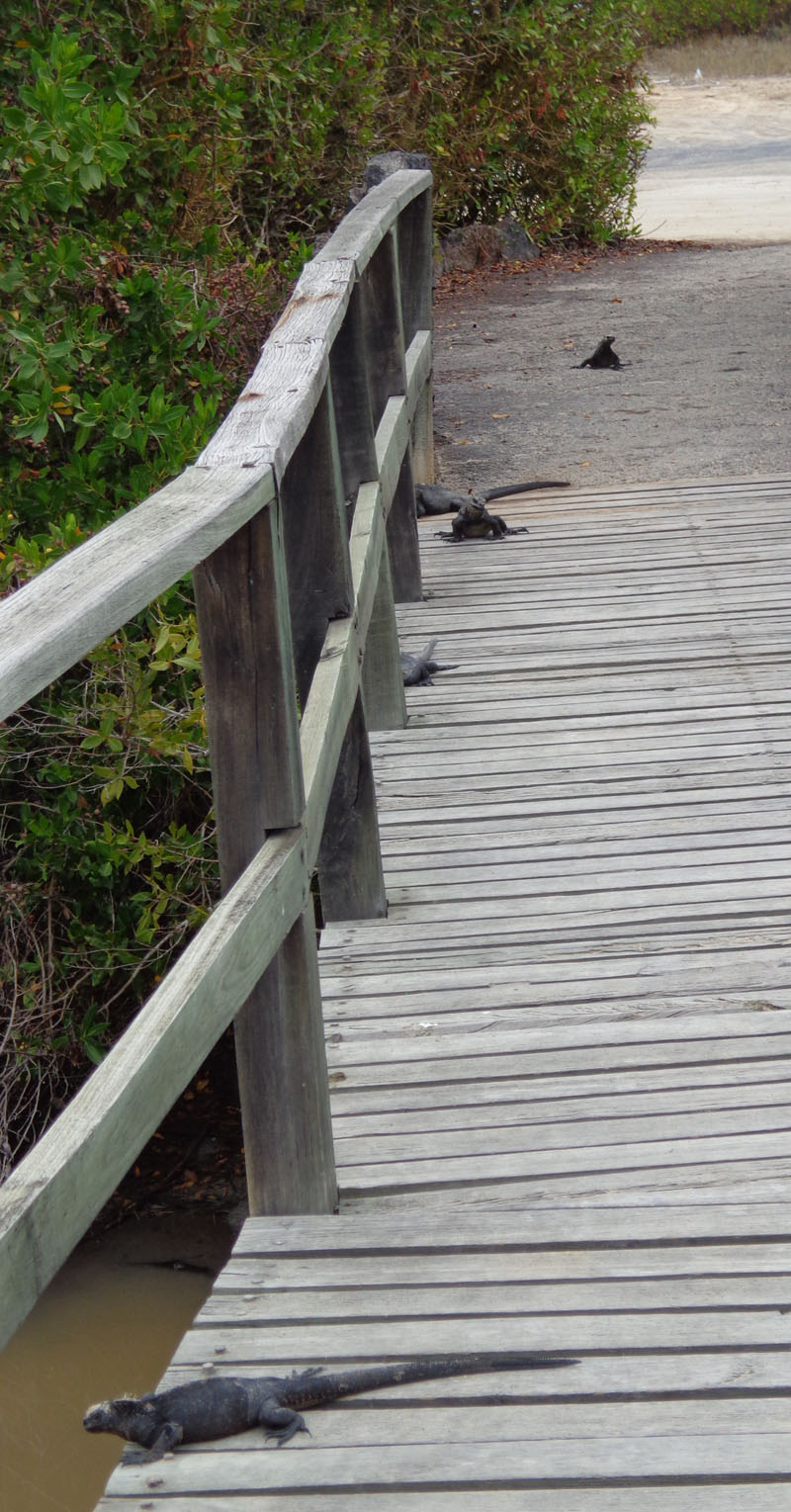 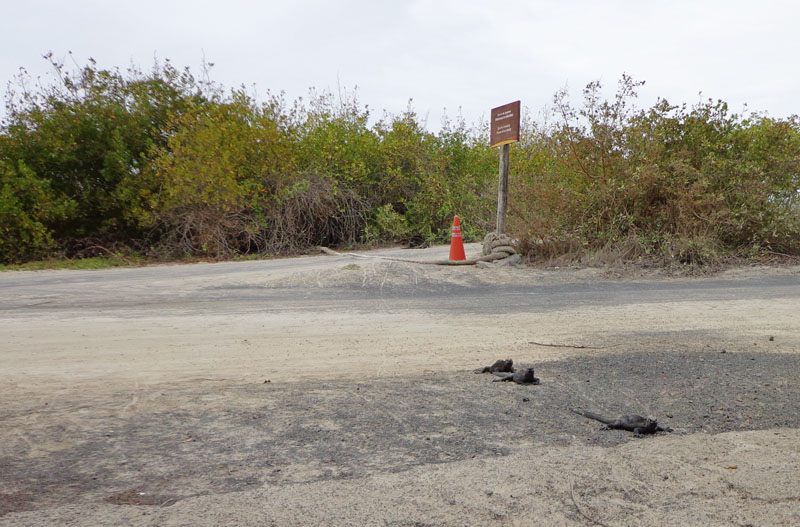 They start on the beach. Lee put down the flag so they could show their colours

These guys are getting ready to go 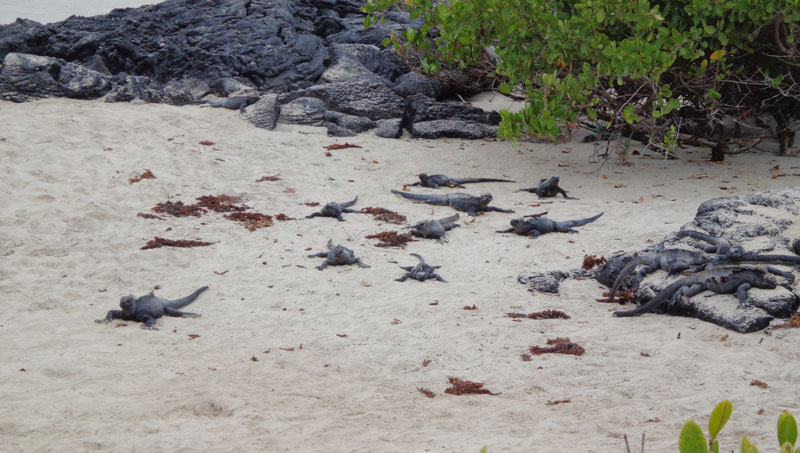 After that morning entertainment Lee went to Concha De Perla to snorkle. This is the old Ferry to Santa Cruz. 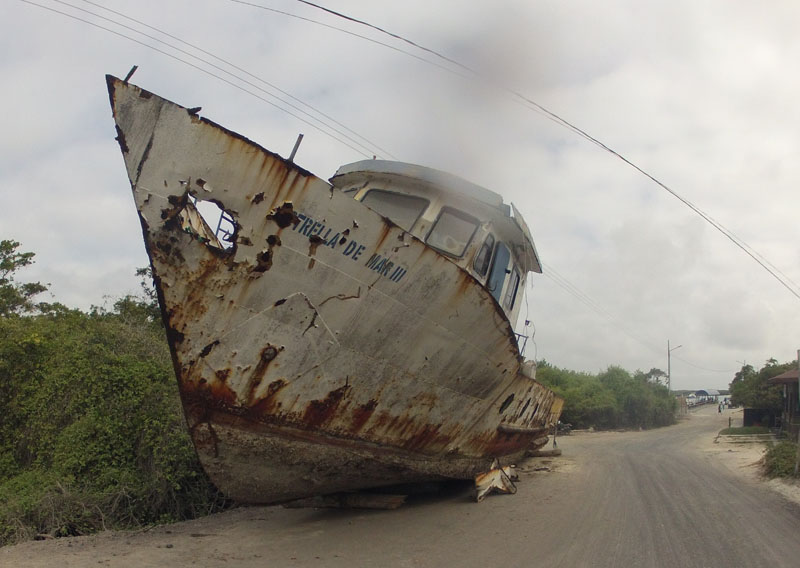 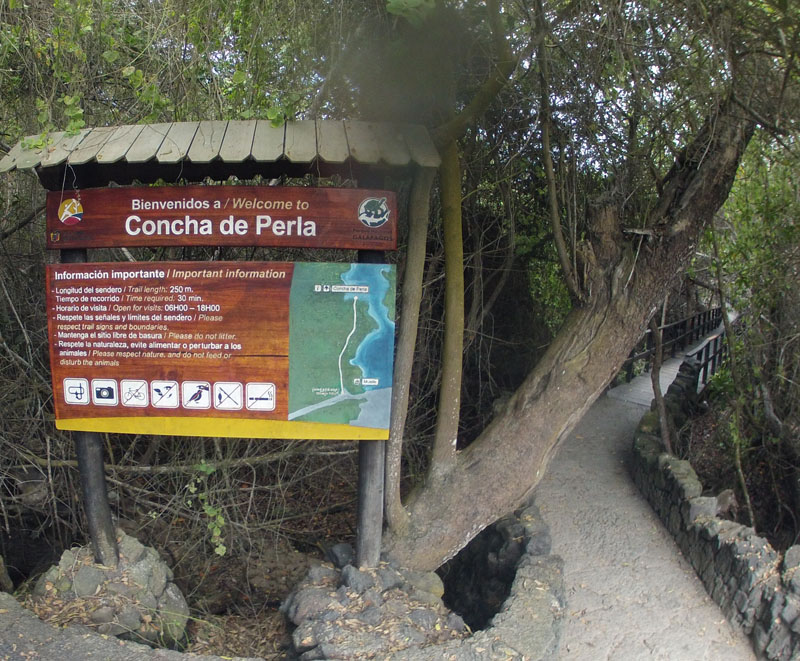 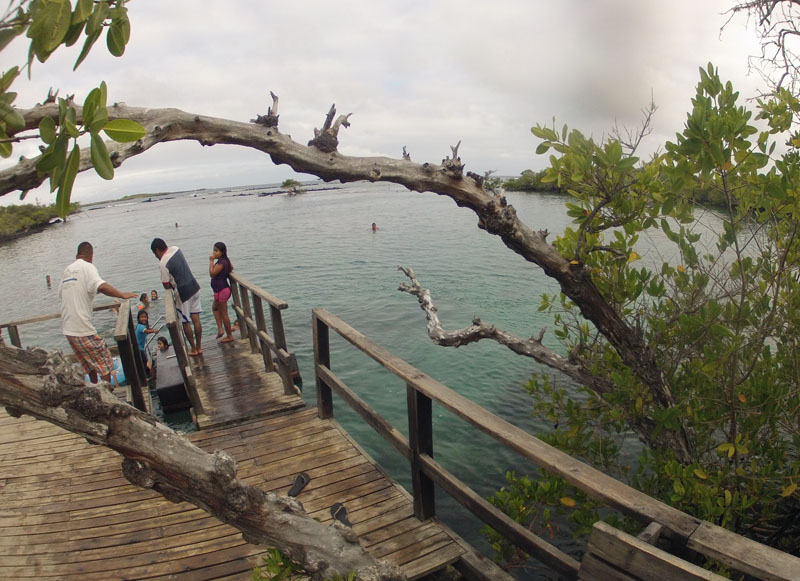 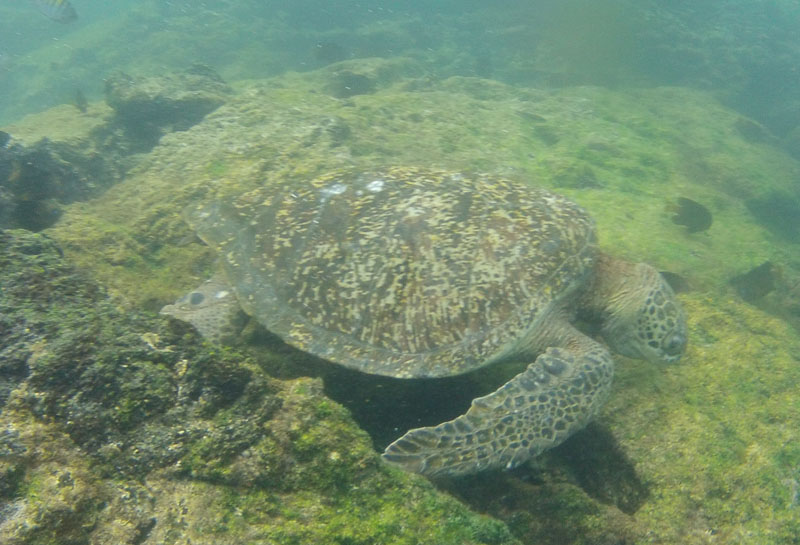 The Sea Lions can sit where ever they want! 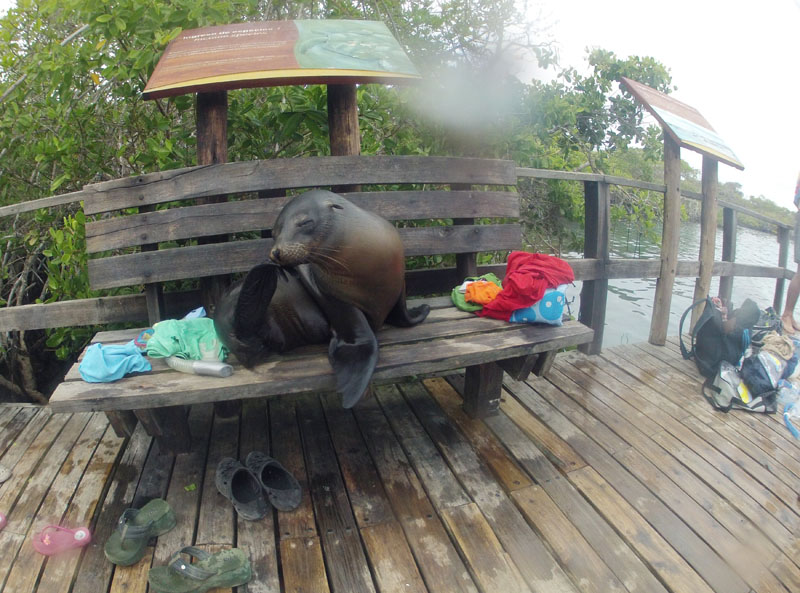 Back at Casa De Marita, our living room. 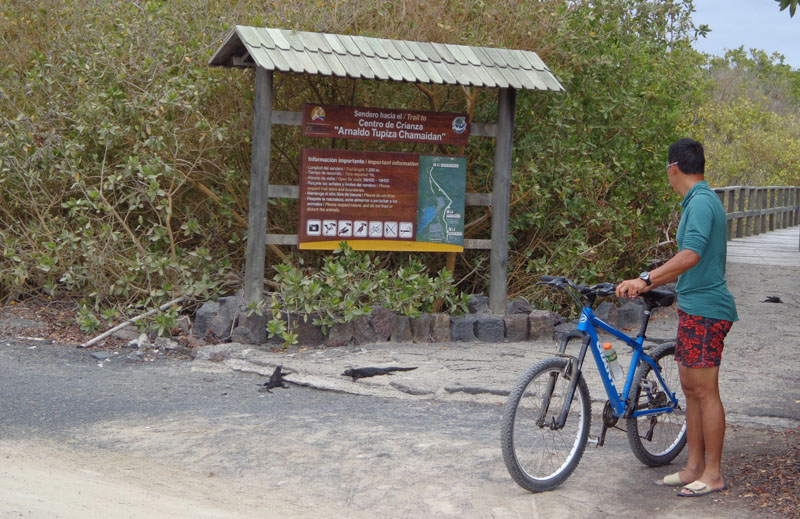 Then rode out to the Wall of Tears. On the way we saw a few Tortoises that were reintroduced to this area as well a lot more Iguana’s 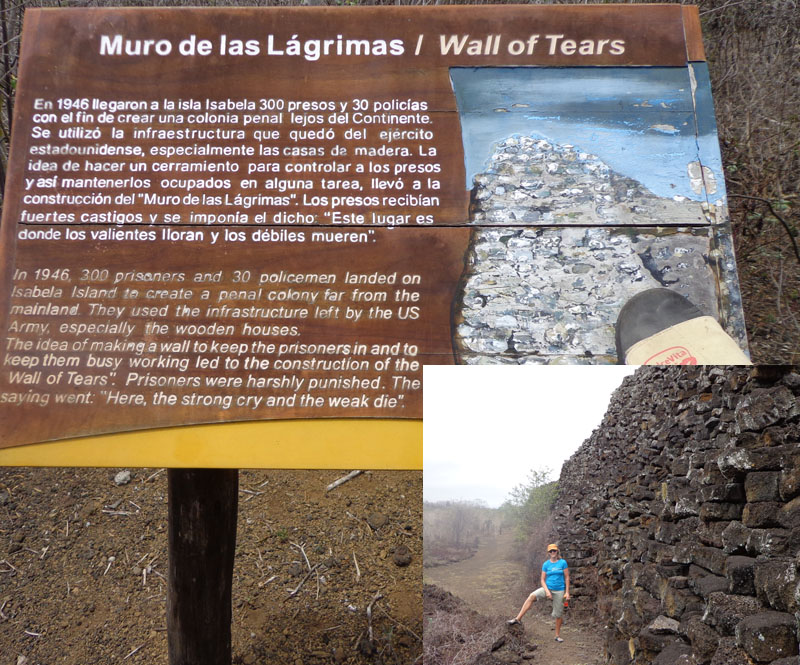 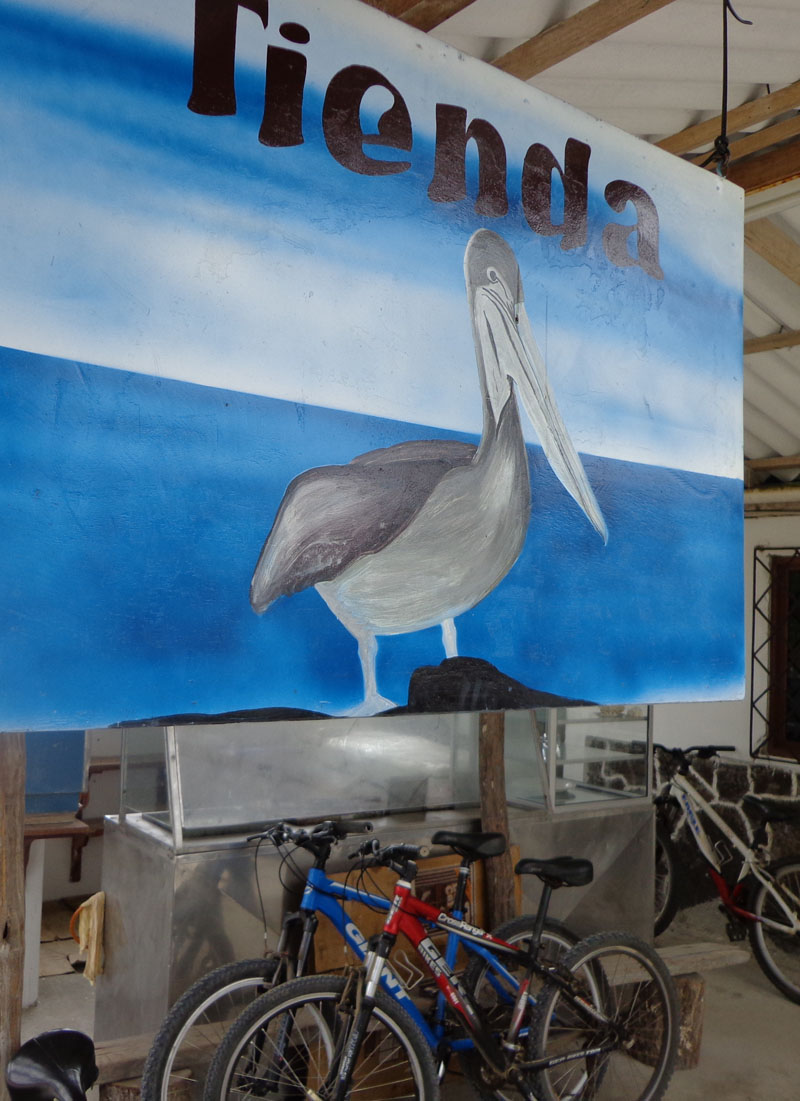 We went back to a pier that had ! MORE IGUANA’S!

This is the view from the pier to Casa De Marita 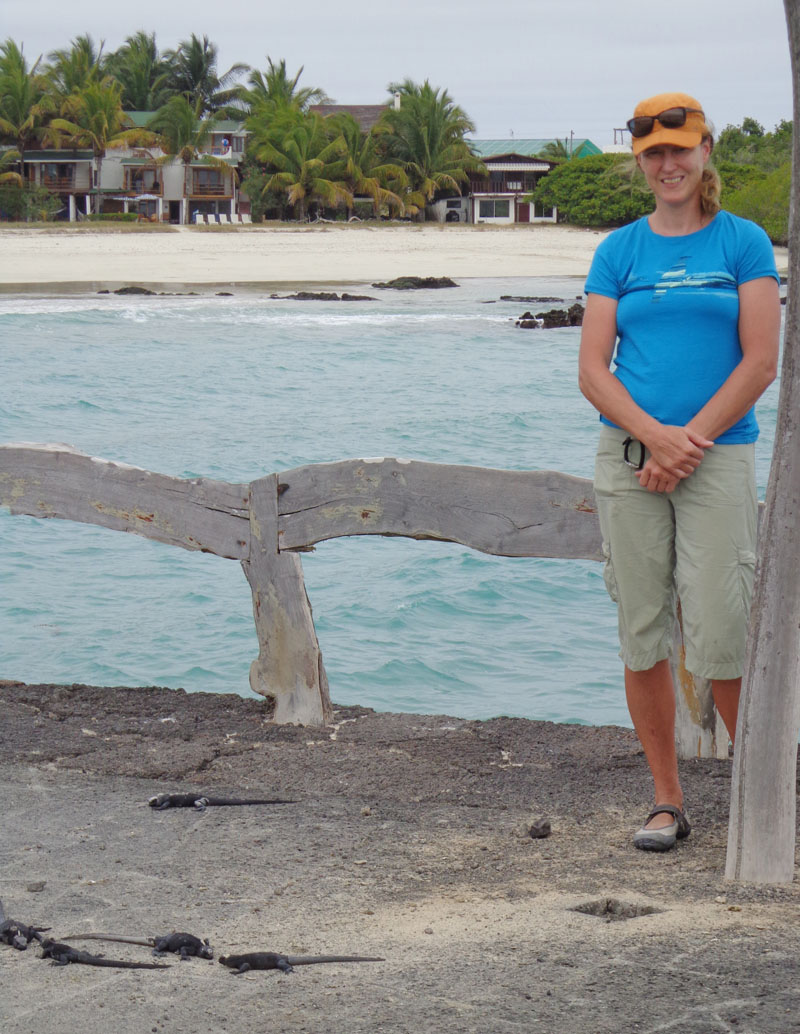 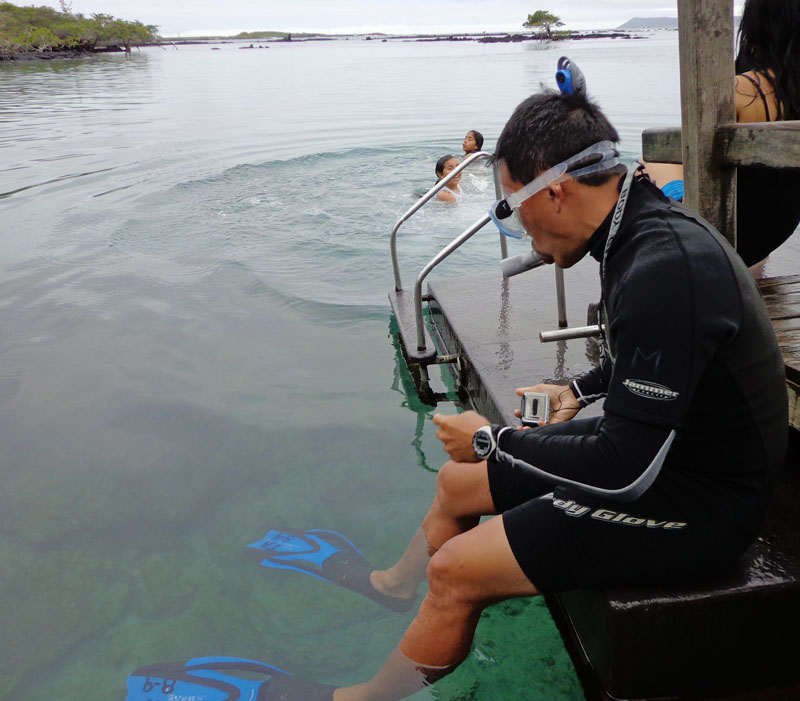 I hung out at the hotel 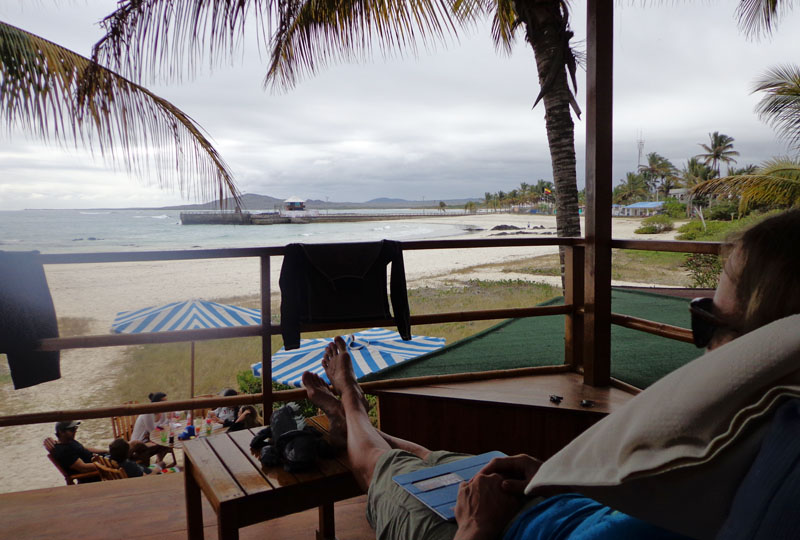 Not a bad way to spend a couple of days! 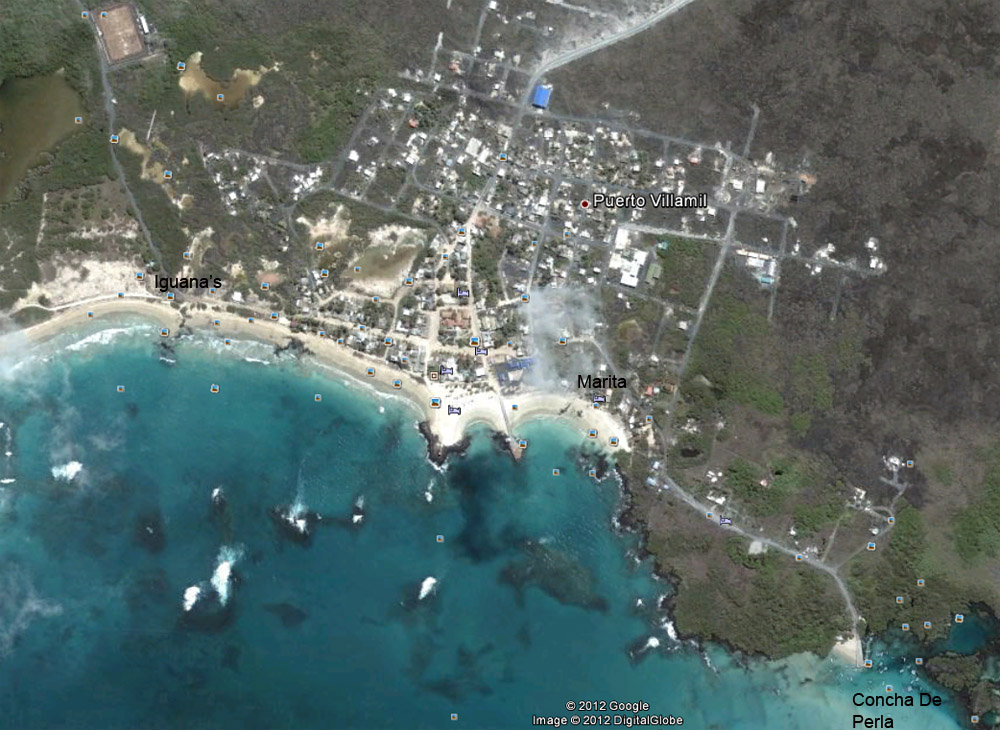