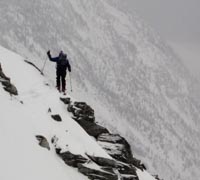 Plans to ski Forever Young today were thwarted by clouds and snow which was not in the forcast. So we opted to stay close to home check out the Couloir on Grizzly Peak.

Grizzly Peak in the background with Grizzly shoulder – the treed slope in the foreground. Our objective was the couloir without the cliffs below it. 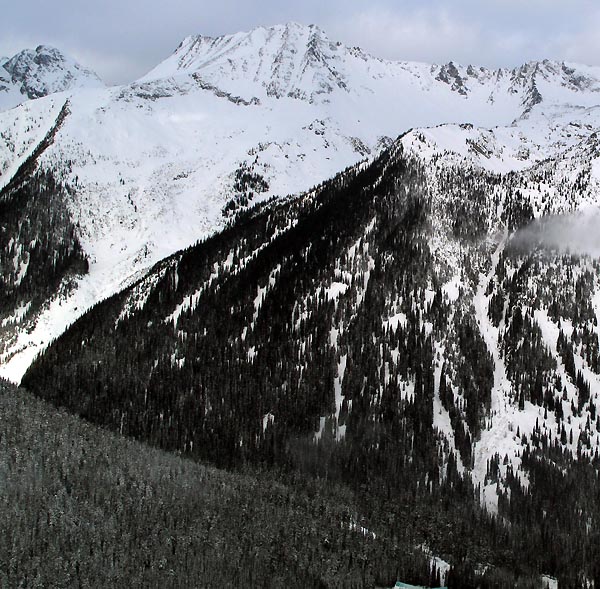 Better view of the couloir and Grizzly Peak. 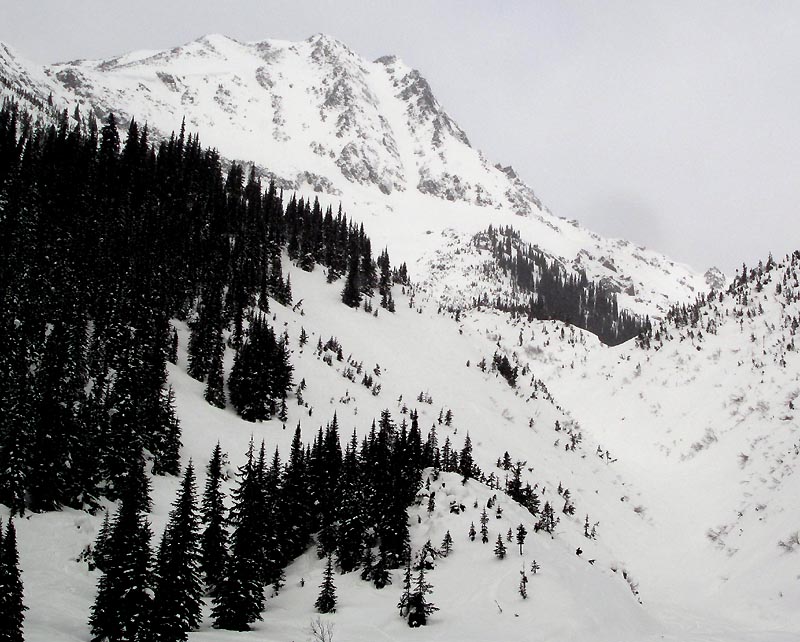 The lower treed slopes are also nice on a low vis day.

Once we started getting out of the trees the skinning become steeper and more difficult. 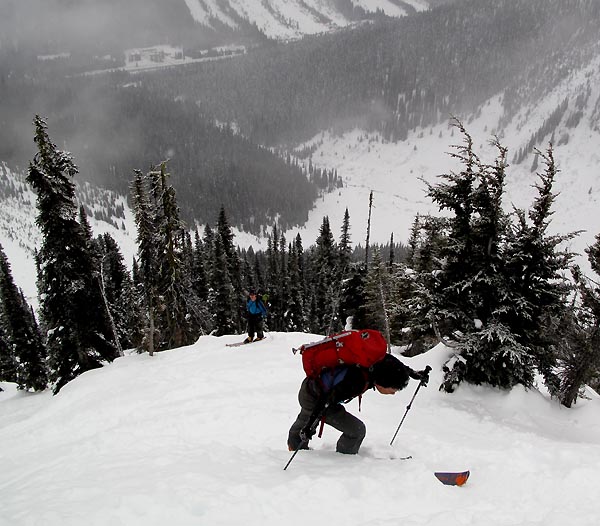 Once off the ridge you can see the final climb up to Grizzly Peak. This would be a 300m boot pack. On regular snow years you can skin up the ridge to lookers right. 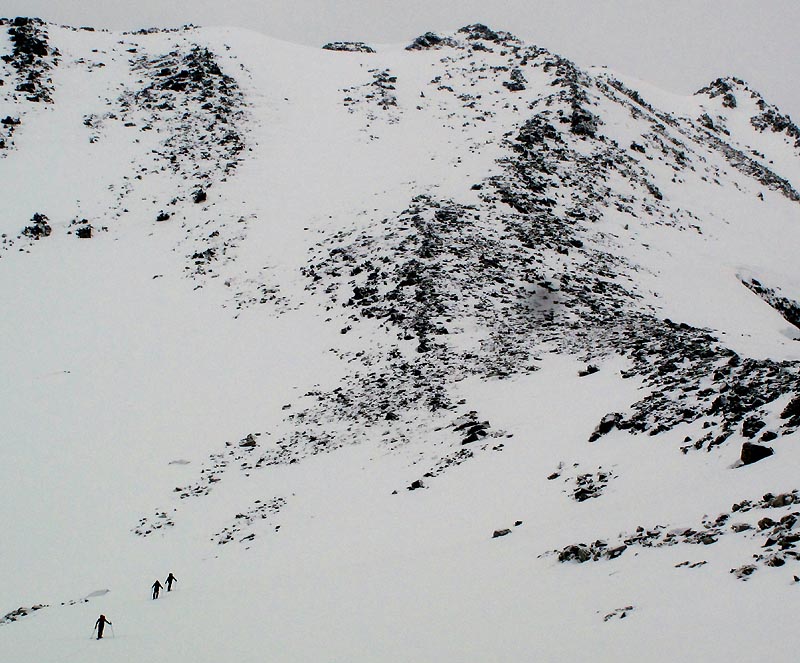 Ryan has a rather unorthodox method of getting his skis up the boot pack! 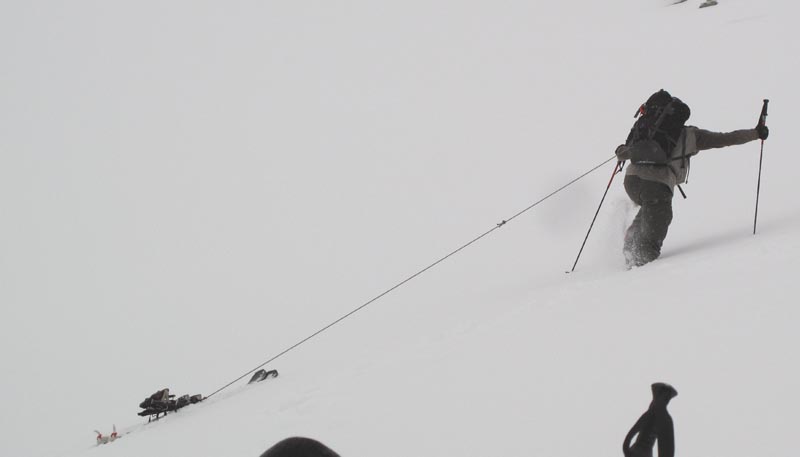 The volkle Katana’s like the snow so much they’d rather stay there! !

Another group – Alex, Ryan and Tom – caught us on the skin up. We stuck together most of the way up with Alex and Ryan leading the way. Strong boys! 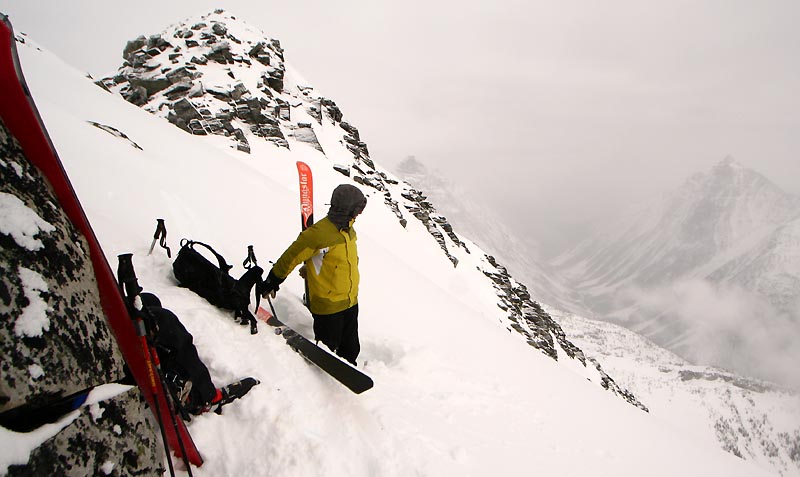 Alex with his Dynastar Legend XXL’s waiting for their day of blood!

The final push up the boot pack! 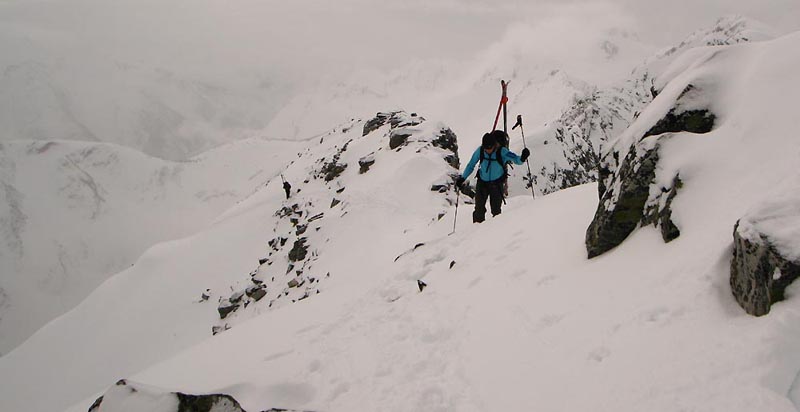 Ryan getting ready to go on his svelte Volkle Katana’s and Raichle Flexon touring gear! 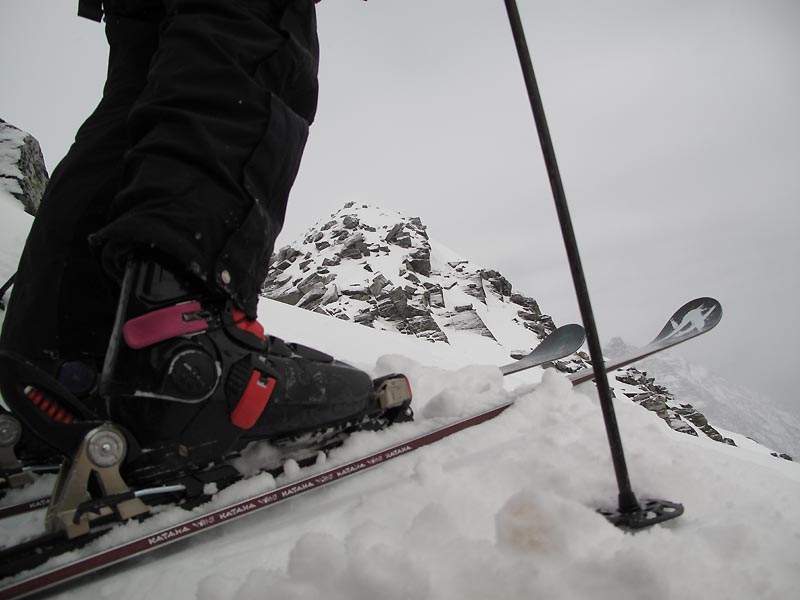 Eat your heart out dynafiddle!

Tom getting ready to get over to the Couloir. Starting here would put us over some cliffs. 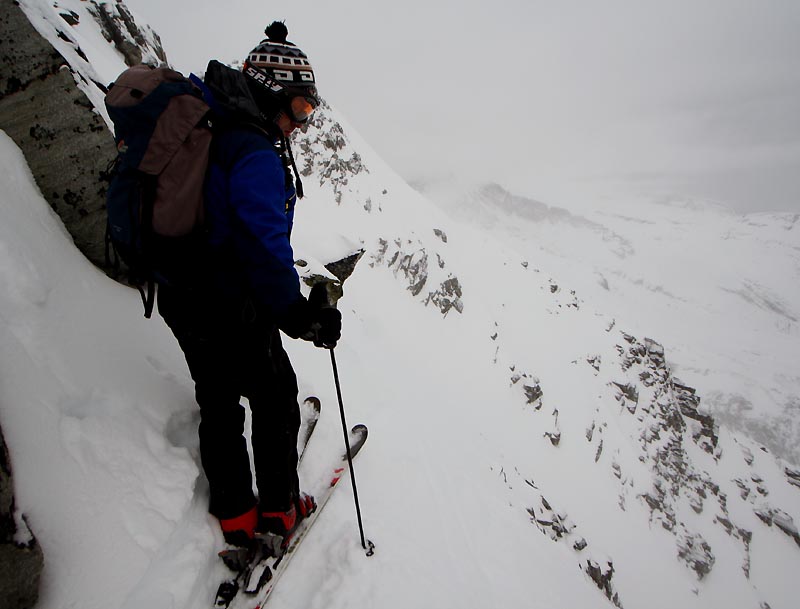 Cliff hucking would have been highly undesirable!

We had one more knoll to get around. Looks worse then it was. 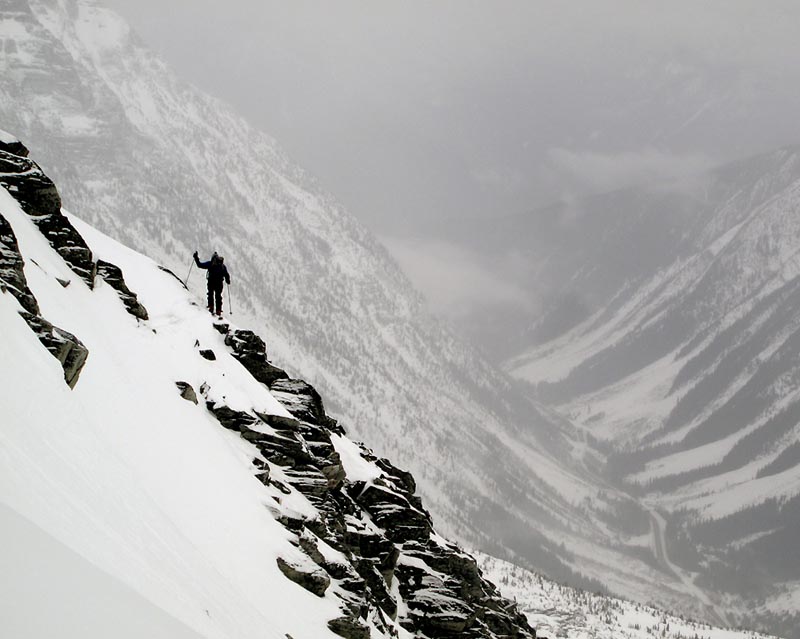 We are now at the top of the Couloir waiting our turn. 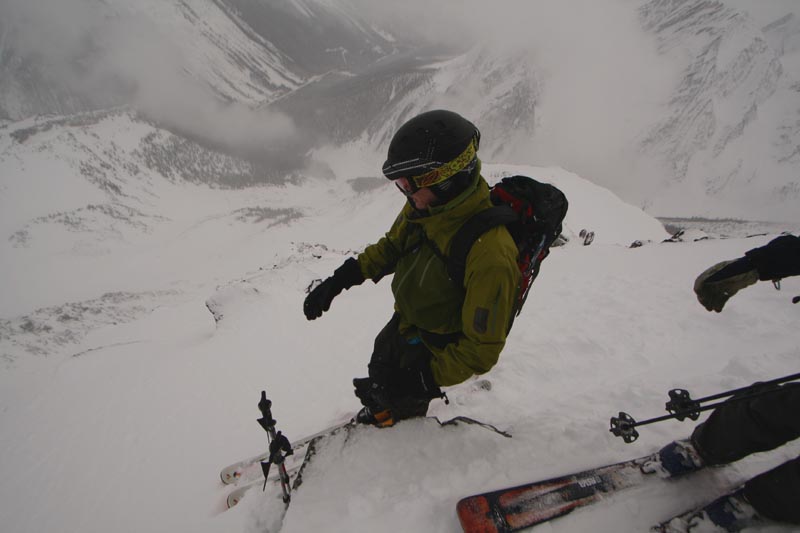 Gregor – why did I sit on the couch so much last week? – Wilson 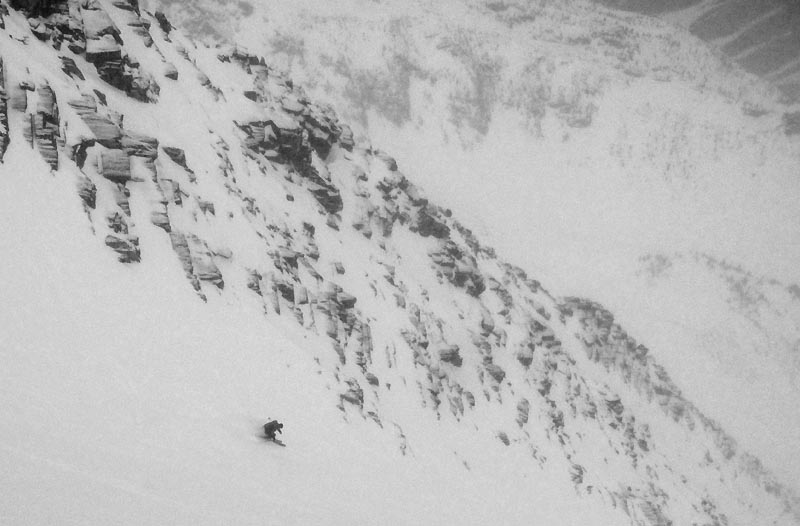 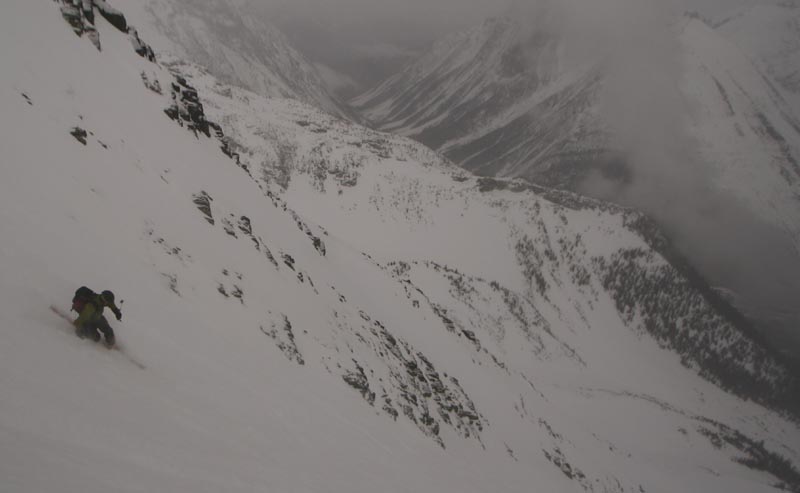 Gregor remembering how to ski! 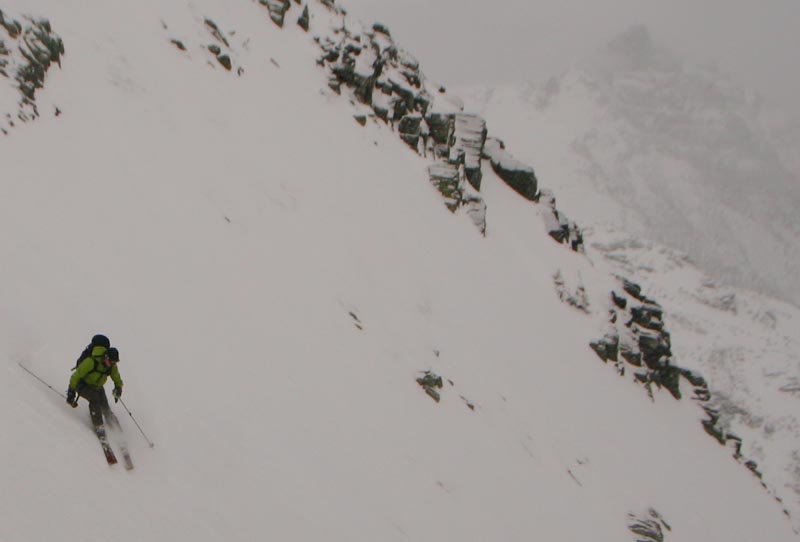 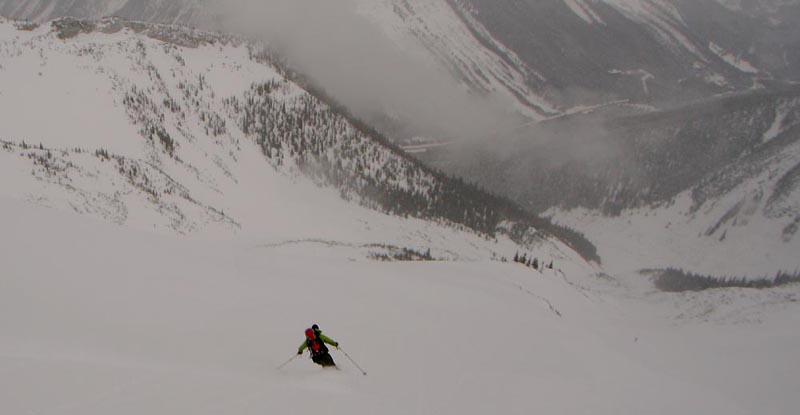 Once down in the safety of the trees with the couloir watching in the background we find some pretty nice pow!

The map of our route. 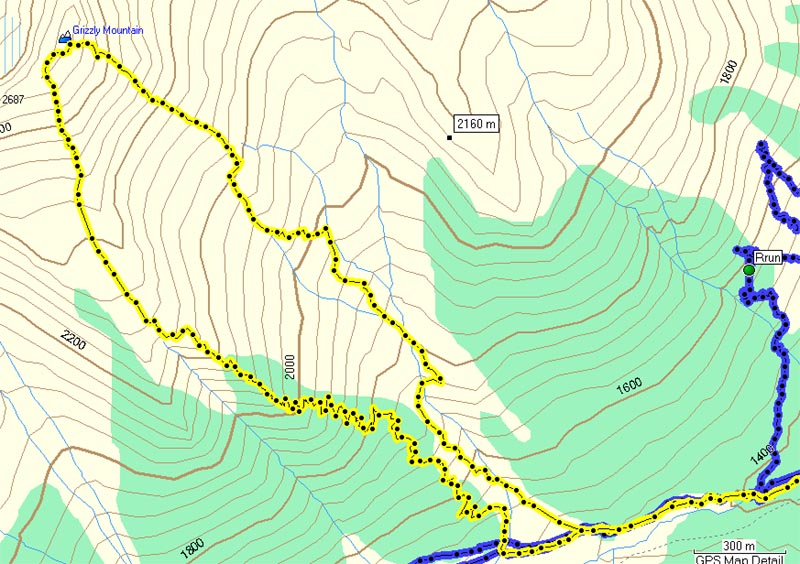 This entry was posted in 2009, ski and tagged grizzly shoulder, rogers pass. Bookmark the permalink.