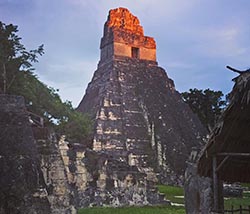 Tikal is an archaelogical site of Mayan ruins 300km North East of Guatemala City in the northernmost part of Guatemala. It’s reached from Ciudad either by a 8hr bus ride or a one hour flight. We flew. We’d add that the “tourist bus” ride comes highly rated for comfort as it’s air-conditioned and many people use that time to catch up on sleep. The flight is internal, only serviced by two airlines and a classic tourist flight where one is charged through the nose — but it saves so much time. If you take the flight make sure that you go to the smaller domestic flights terminal

We started our first day heading to Tikal from Antigua based out of the Hotel San Jorge. We were picked up by our shuttle provided by Old Town Outfitters at 4:00am to catch our 6:30am fight from Ciudad to Flores Airport from where we would then get driven to Tikal. OTO arranged our trip and planned logistics (such as pickup, transfers, accommodations) and took care of other travel-related headaches such as what to do with our unneeded luggage while we were at Tikal (it was stored at our next hotel when we returned to Antigua). It was a definite plus to have OTO take care of much of these many details – saving a lot of time and hassle. 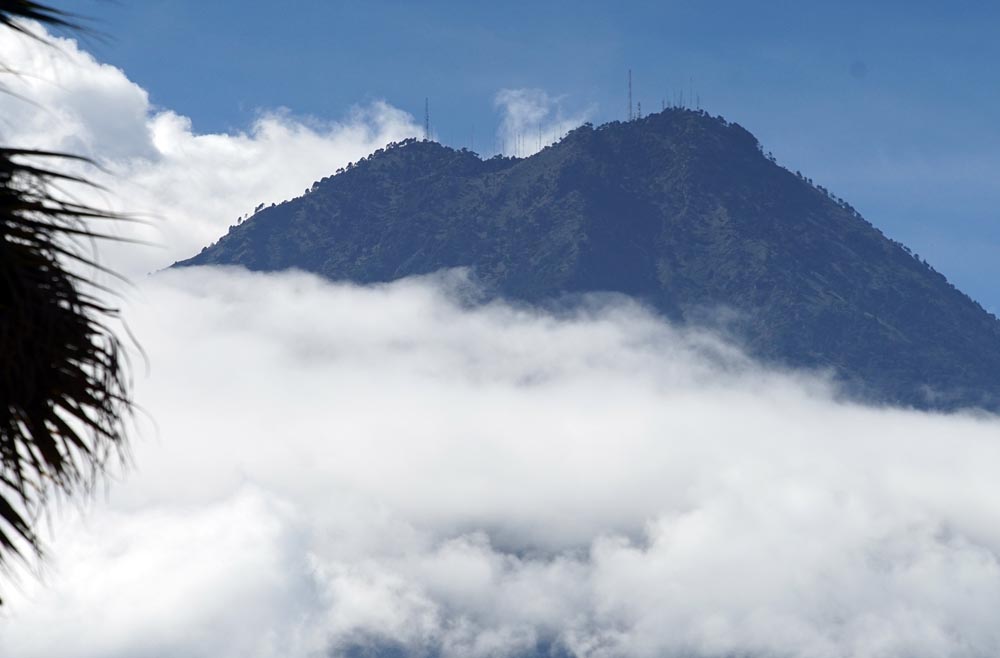 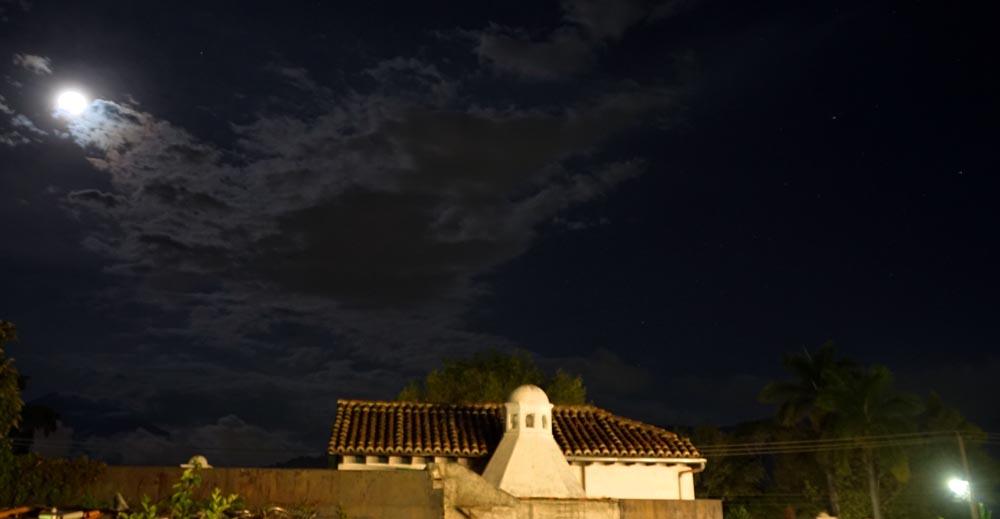 Sunrise from the domestic terminal at Ciudad

In and of itself Flores is a nice town located as it on Lago Petén Itzá but we were there too quickly for more than a fleeting impression. After a one hour drive from Flores to Tikal we checked in at our accommodations at the Tikal Inn. Within a short time we were on a guided tour of the ruins in the heat of the afternoon.

Check the website for current admittance costs since costs and ticket policies seem to change often. For example, you do not need a park ticket if you are going to the Tikal area just to look at the museum and the shops around the visitor centre area; you only need an entrance ticket if you are entering the archaelogical site itself to view the ruins. Many people may choose to skip the archaelogical site tour during their first day and spend the entire second day then visiting the site. 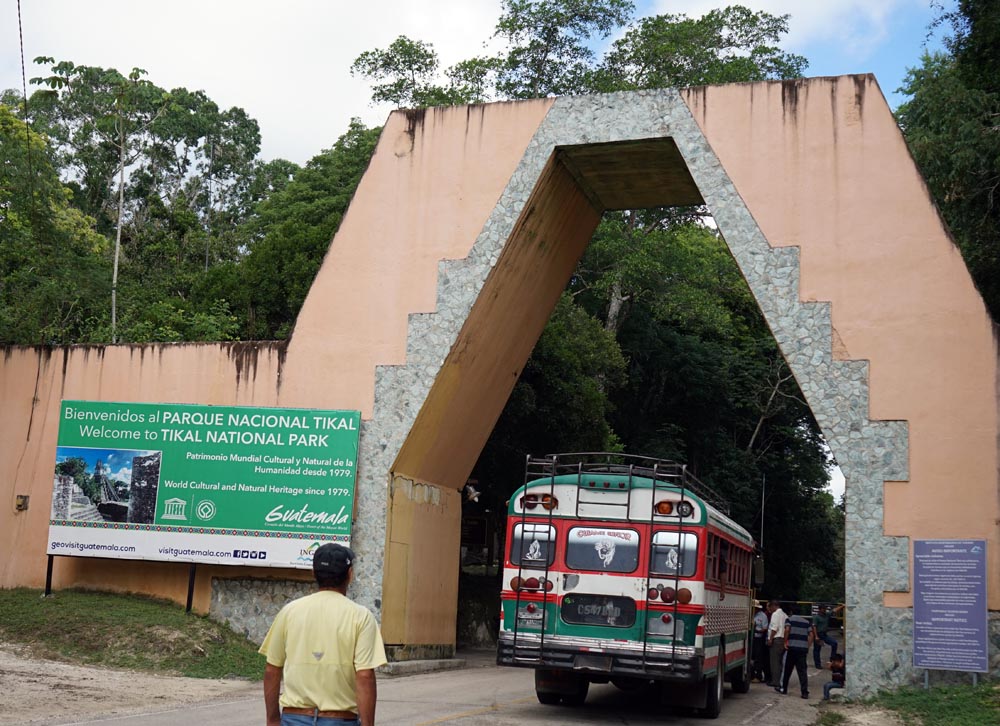 The entrance to Tikal 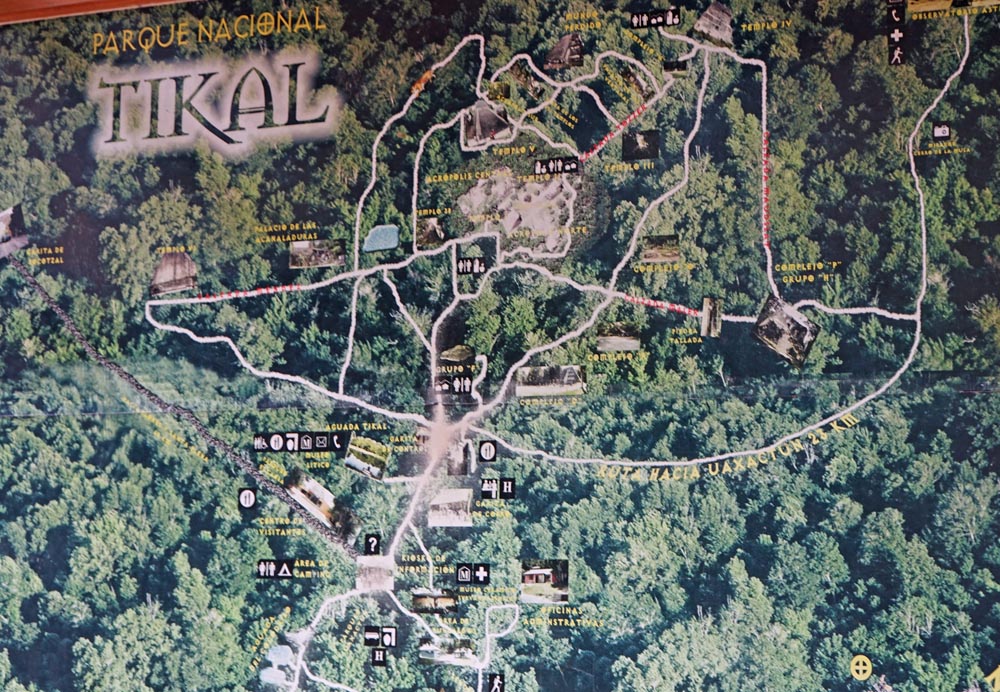 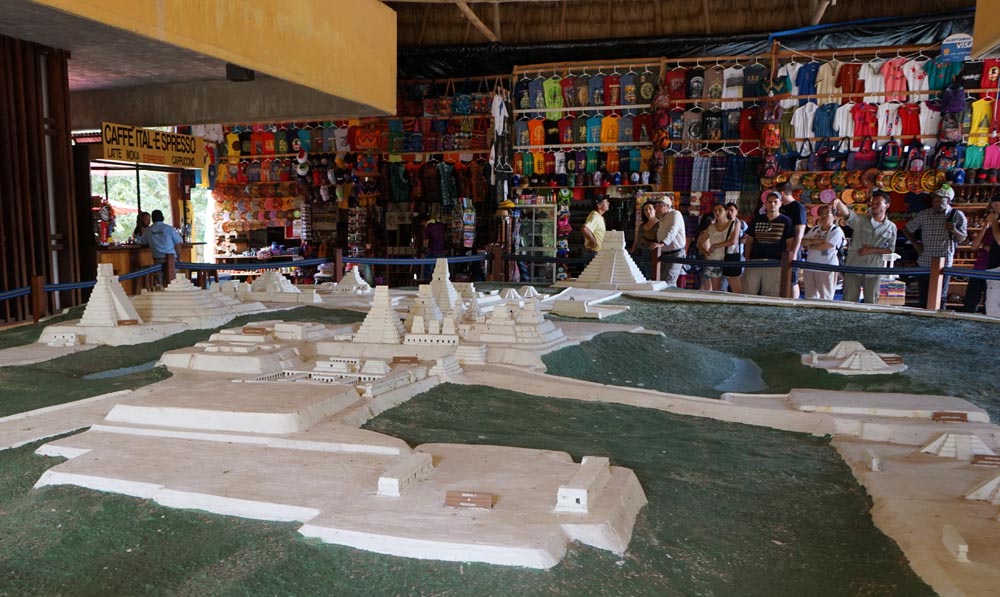 We paid the Tikal archaelogical site fee to maximize the visit for both days getting a feel for the site via the guided tour from 11am till 2pm when we came back to Tikal Inn for lunch. There is a pool at the Tikal Inn which is vital for refreshment and cooling down in the mid-day heat. The day ticket gives you the opportunity to also venture back to the Tikal site for the evening golden hour sunset lightshow.

By all accounts, one can never take a Tikal sunset or sunrise for granted as weather in the tropical jungle can change. Temple 22 in the Grand Plaza faces west and was an ideal location to watch the sunset. We timed it perfectly; the lightshow was magnificent beyond description and we walked back via headlamp to the Tikal Inn well and truly satisfied. 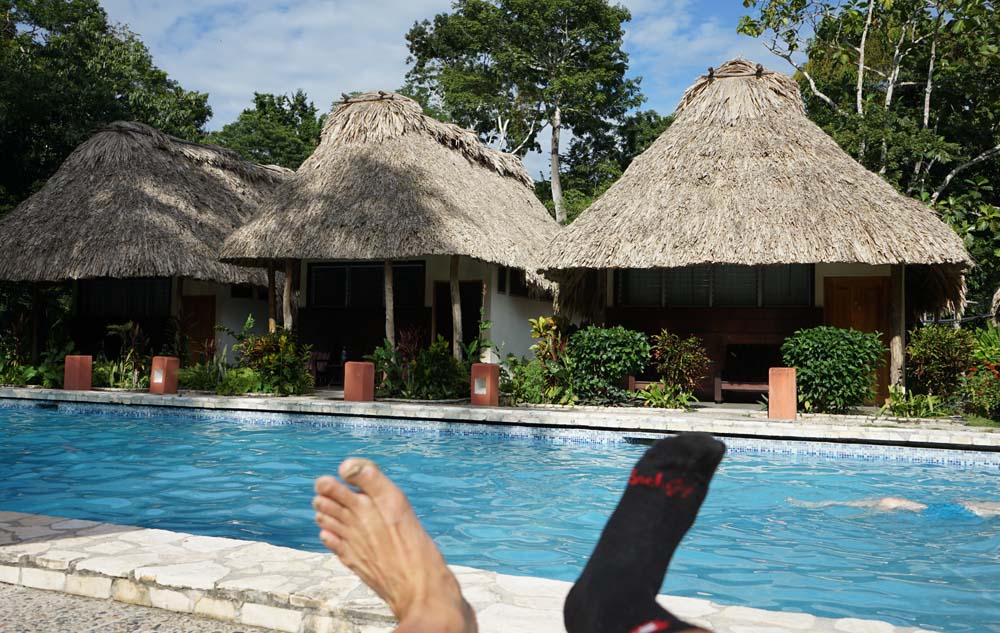 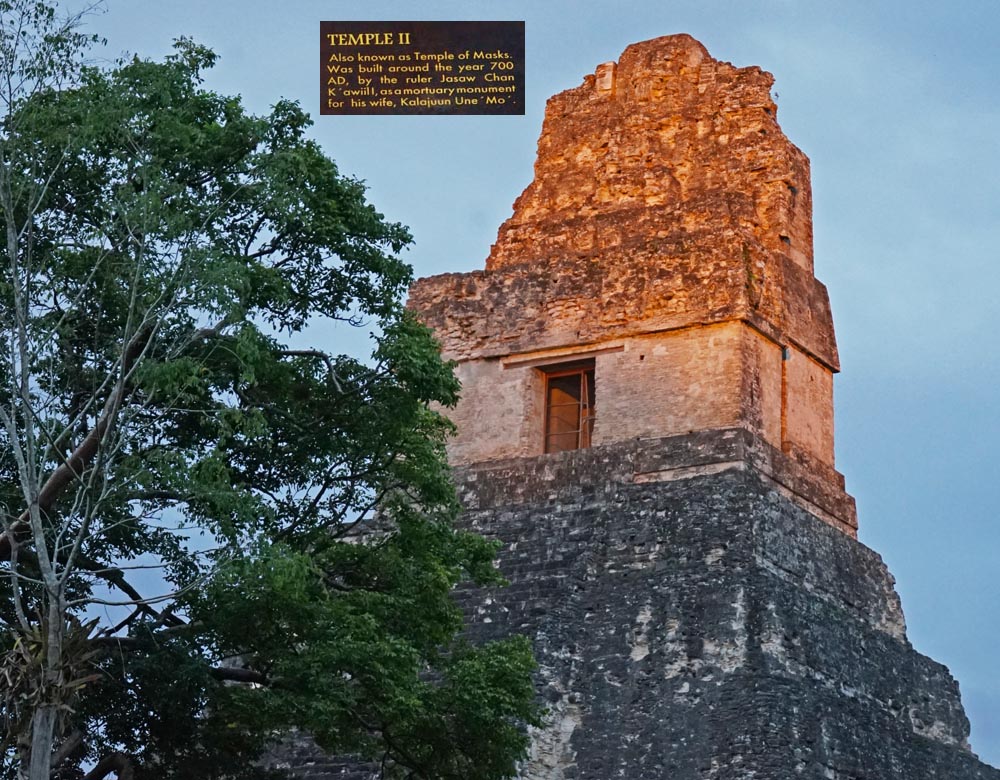 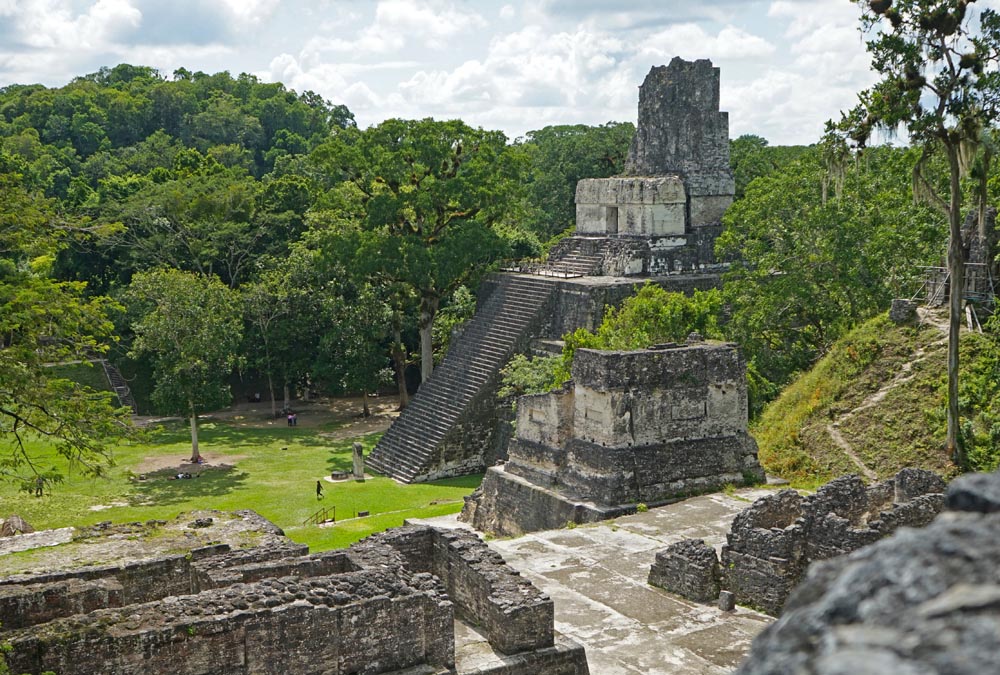 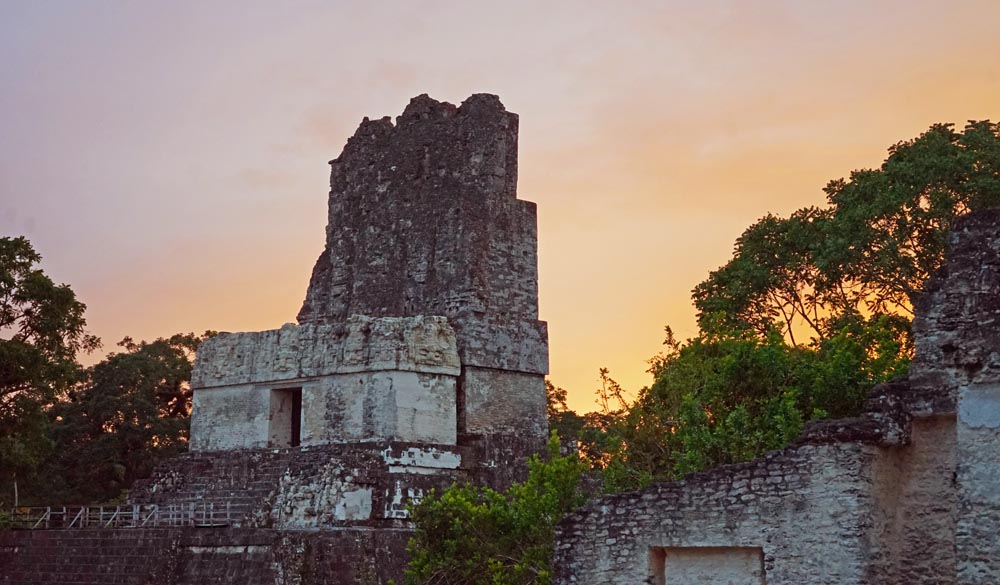 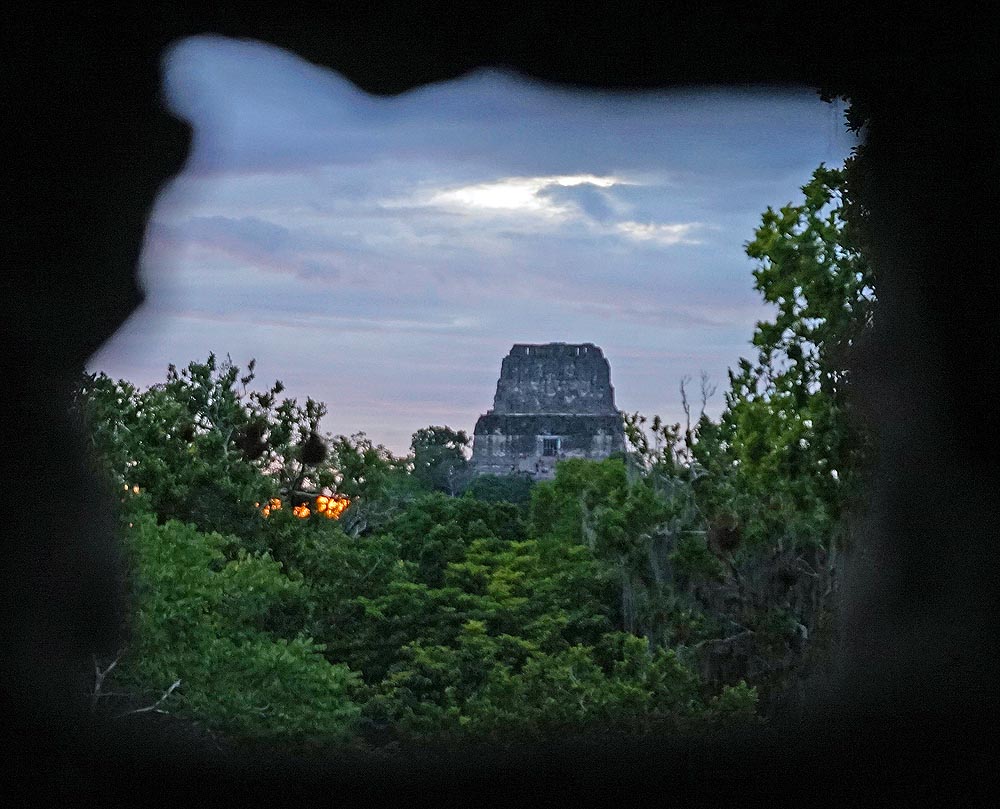 The next day we were up at 4:00am to hike to Temple IV which faces east and offers the best sunrise view. Under current rules one can buy a sunrise ticket which gives you early pre-sunrise entry to Tikal. You must combine this early entry ticket purchase with the cost of hiring a guide; something required both for safety and to ensure visitors don’t run rampant over the archaelogical site.

The Tikal sunrise is among the most-photographed events of the western world and for good reason; its spectacular! Because it’s so famous expect to share Temple IV’s sunrise with a few people. Having said that, Temple IV has plenty of elbow room. Jungle sounds (the hooting of monkeys, chirping of insects) are initially noisome then deafening as the sun’s first rays hit the clouds on the horizon. Then as the tropical jungle’s sounds abate, the lightshow becomes the star.

Technically; the early morning ticket entitles one to Tikal archaelogical site access until 8am. However, park rangers don’t run around forcing people to leave at 8am so one can feel free to wander around the site but cannot re-enter after leaving; at least without buying a fresh ticket for the day. We chose to spend the rest of the morning seeing Tikal in morning light then heading back to the Tikal Inn as the days’ heat began penetrating the jungle canopy towards the mid-morning.

The shuttle back to Flores airport does not leave till 4pm giving one lots of time to check out the visitor centre and its environs. The artisans at the crafts market are all regional so the hammocks, bags and other crafts are all of a particular unique northern flavour. It’s very worth your while to spend your time browsing

The ancient Mayan city of Tikal is an example of the extensive architectural skill and planning of the Mayan civilization of the time. Construction began circa 300BC and ended around 950AD. The demise of Tikal was probably due to drought, deforestation, erosion and consequent population decline.

Each Temple, Monument and Square was built by the current ruler and reflected his (they were always men) wealth and influence. There are even 7 ball courts where the ritual Mayan ball game (similar to Racket Ball) was played. The only source of water at Tikal is rain. It is thought an extended drought was the last straw that drove the population away. Since its story persisted in Mayan folklore it was a matter of time before explorers found the ruins in 1850. It is thought that the Spanish Conquistador Cortez passed by the site in 1552, but since the ruins were reclaimed by the forest he did not see them. Made popular in 1977 in the Star Wars movie, A New Hope, it was declared a UNESCO World Heritage site in 1979. Tikal has been thoroughly mapped and has been shown to contain 3,000 structures within 16Sq Kms.

Tikal’s temples will probably get MORE popular with the release of Star Wars; Rogue One. Yes the Death Star is badass but so are Tikal’s soaring towers! One can’t help but look for the Millennium Falcon soaring past the Grand Plaze and Temple IV at sunrise.

Twin Pyramid Complex Q – Indigenous continue today to have ceremonies at these sites. 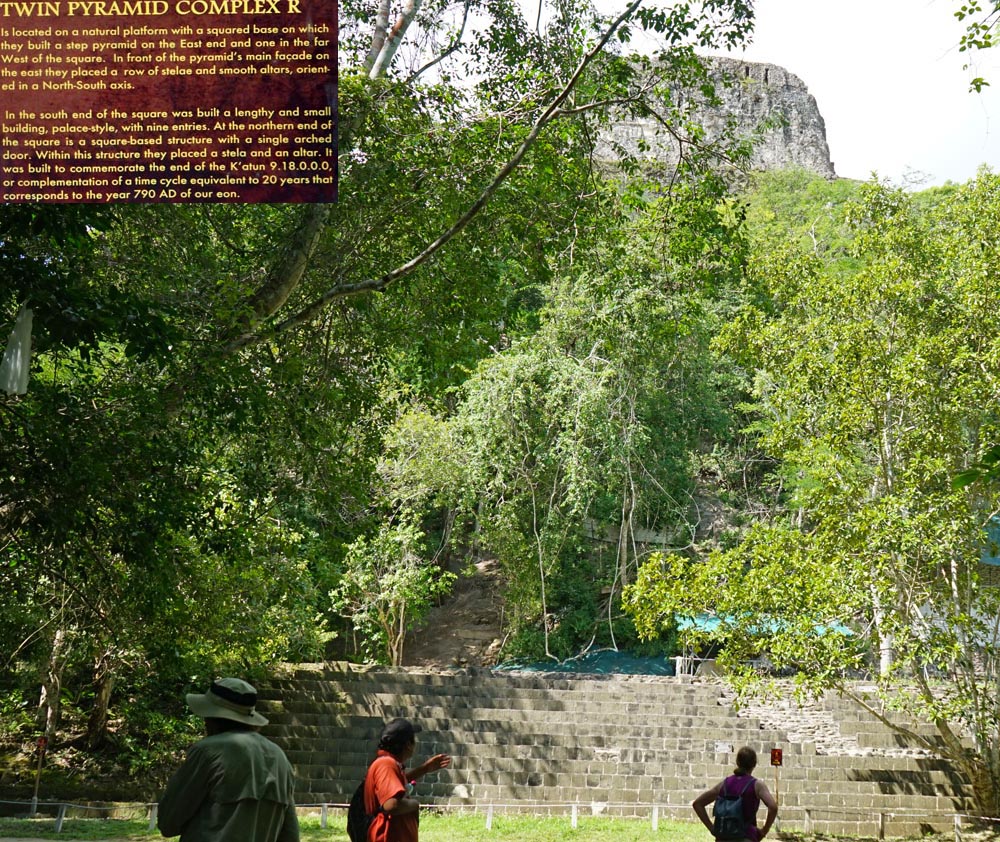 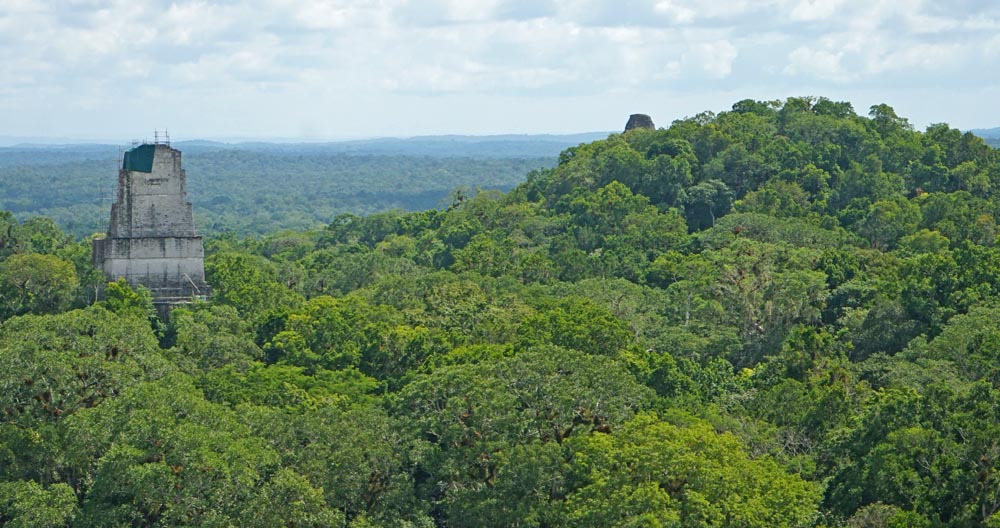 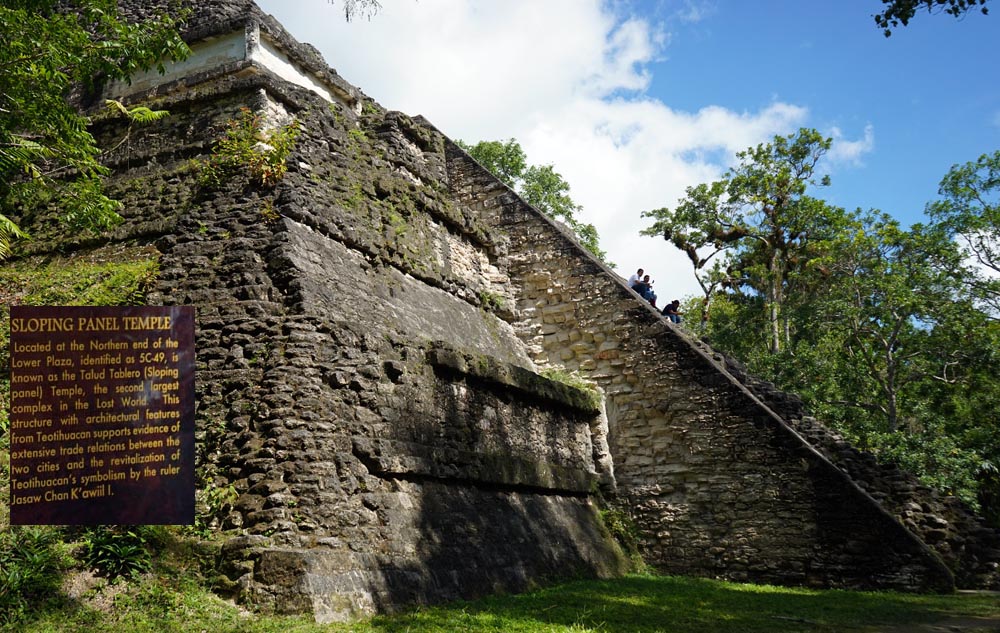 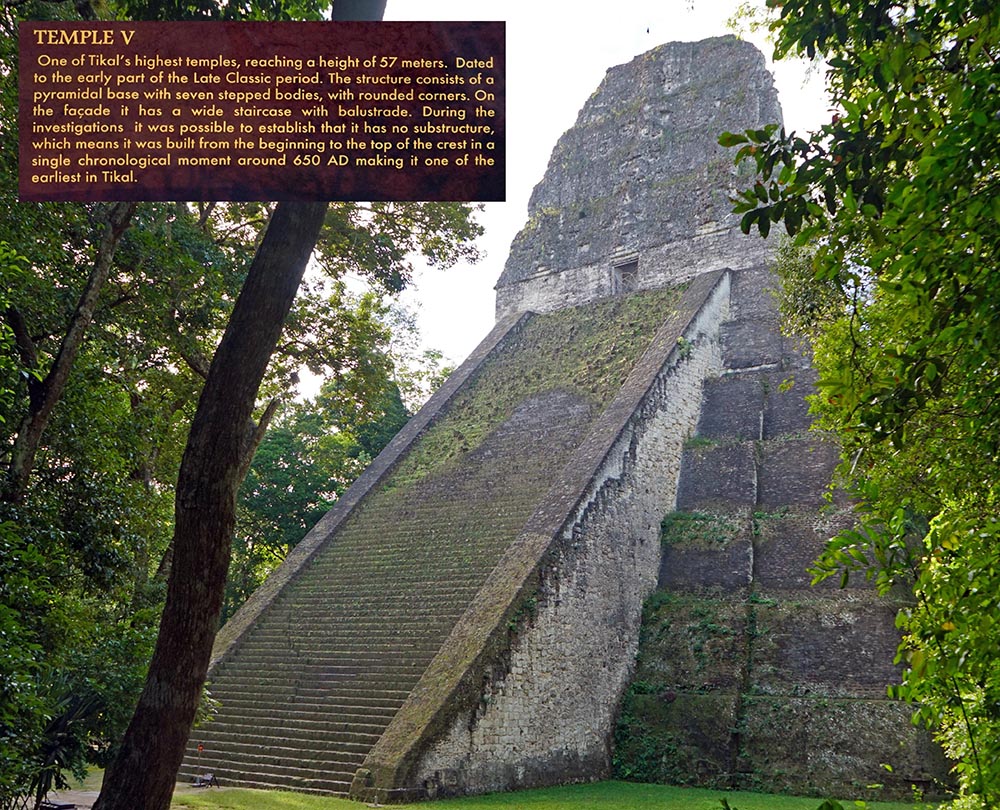 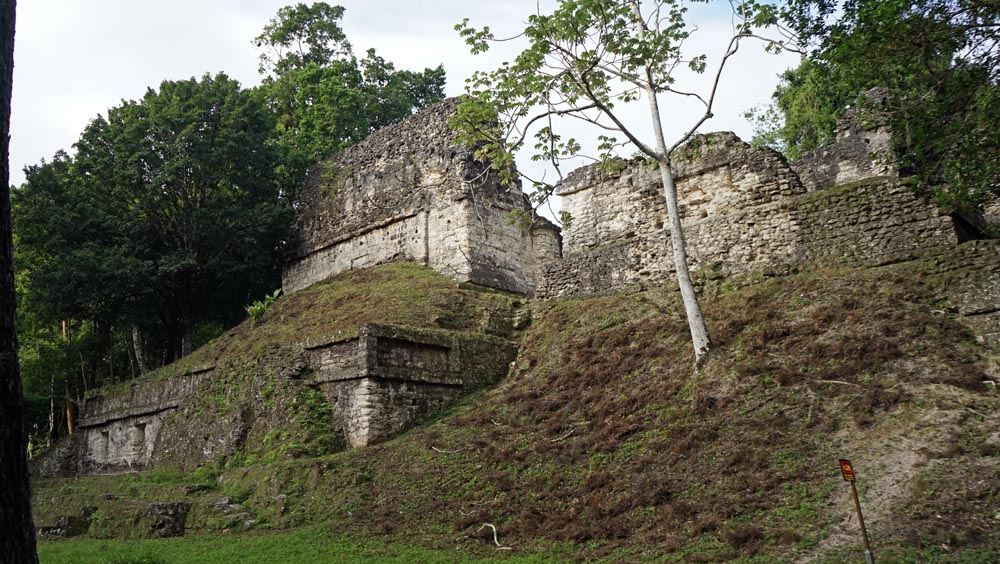 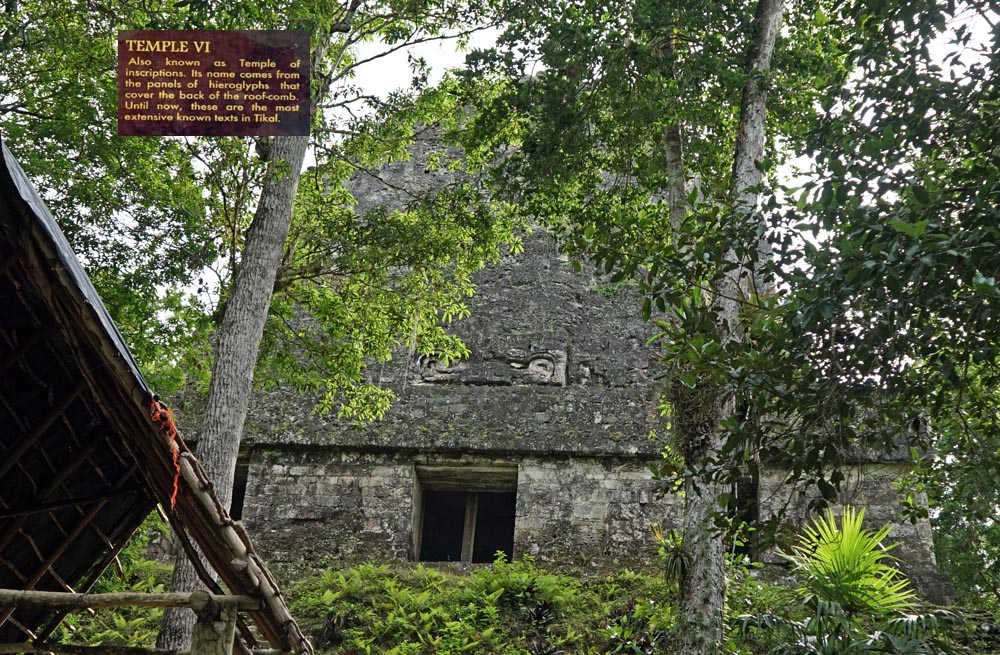 Where to stay and eat.

There are two hotels and a camping area in the park. The downside of being in Flores or outside the park is that it’d be hard to get both the sunset and sunrise experience (daytrips offer one or the other but not both). We were at the Tikal Inn which had that lifesaver for hot tropical days – a pool! Wifi Internet access is also offered but signal is weak; understandable since you are in the middle of a tropical jungle.

The Tikal Inn’s service is prompt, cheerful but be warned that it is pricey. Drinks are top-end and top-priced. Food quantities are also large but are also pricey. There are restaurants and places which serve cold beverages in the visitor centre. While the Tikal Inn’s offerings are good, do not hesitate to sample some alternatives for breakfast, lunch and dinner. We tried the Comedor Tikal and it was excellent. 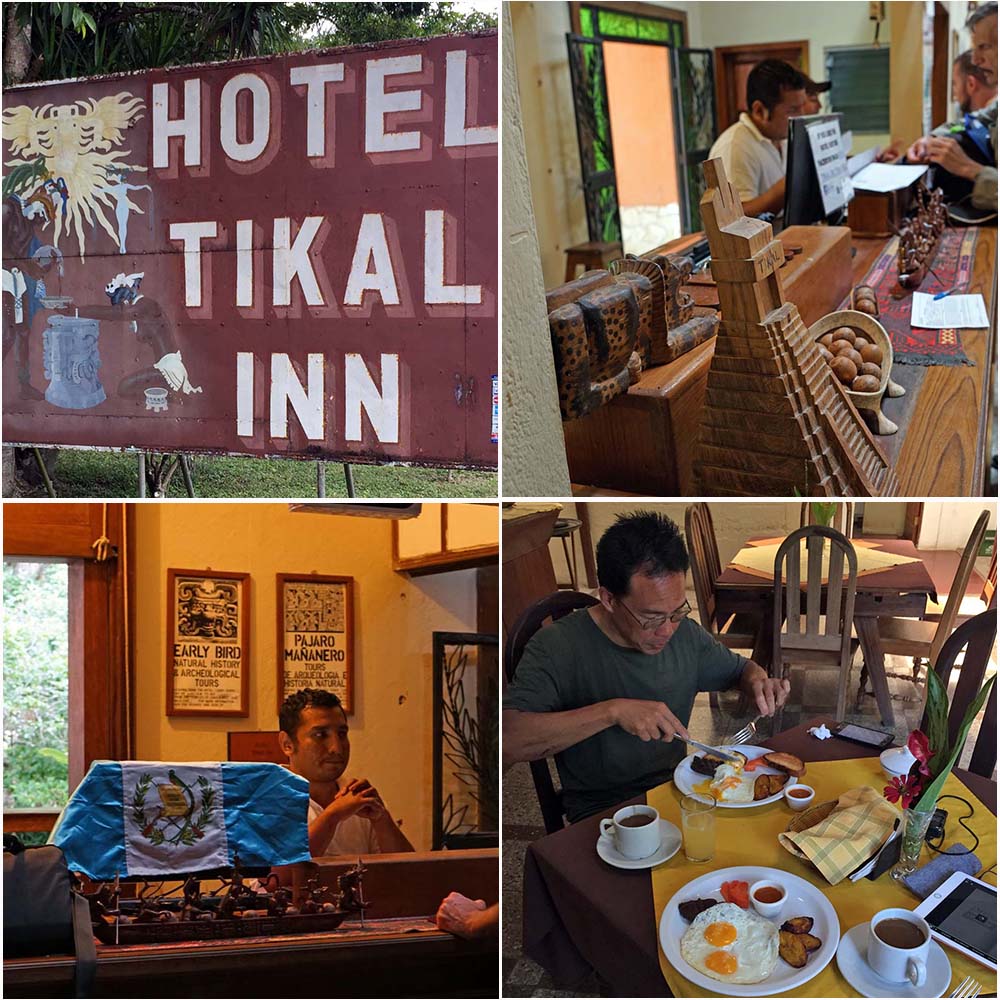 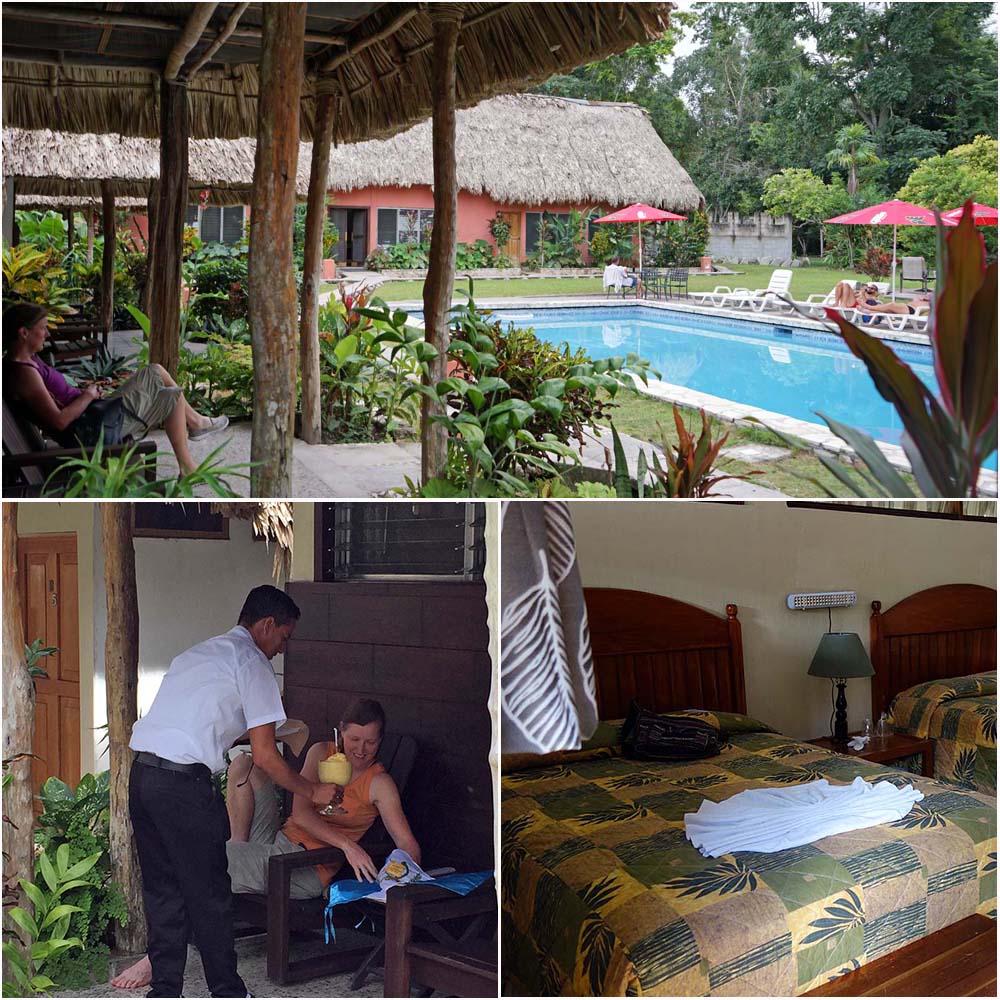 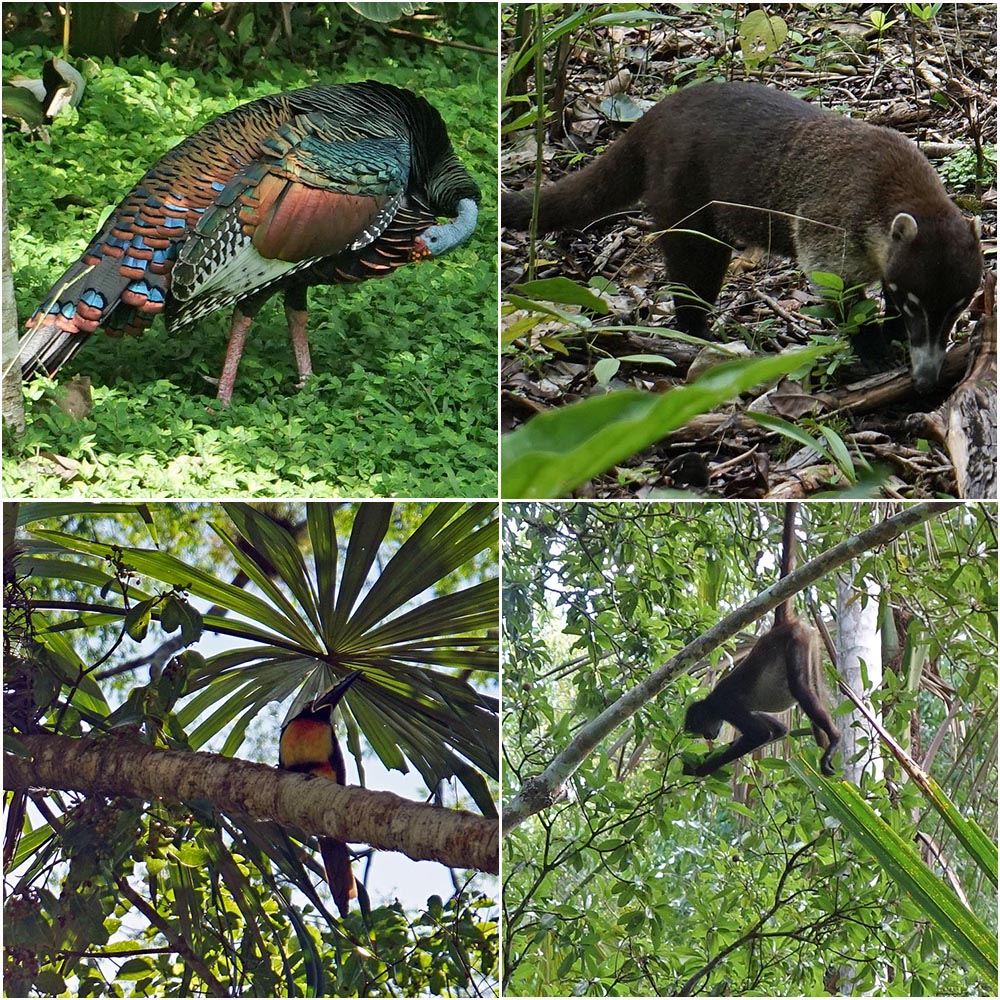 This information was was current as of November 2016 and probably will change. “Tikal National Park is open daily for visits from 6:00 AM to 5:00 PM. Adult tickets for foreigners cost 150 GTQ(about $20 USD). Children under 12 can enter Tikal free of charge. Visiting Uaxactun costs an additional 50 GTQ. If you sign up for a sunrise tour and enter the park before 6:00 AM, the ticket fee is 250 GTQ. Tickets purchased after 3:00 PM are also valid for the next day.”

Guatemalan citizens can enter for free in the park on Sundays. Expect those days to be busiest 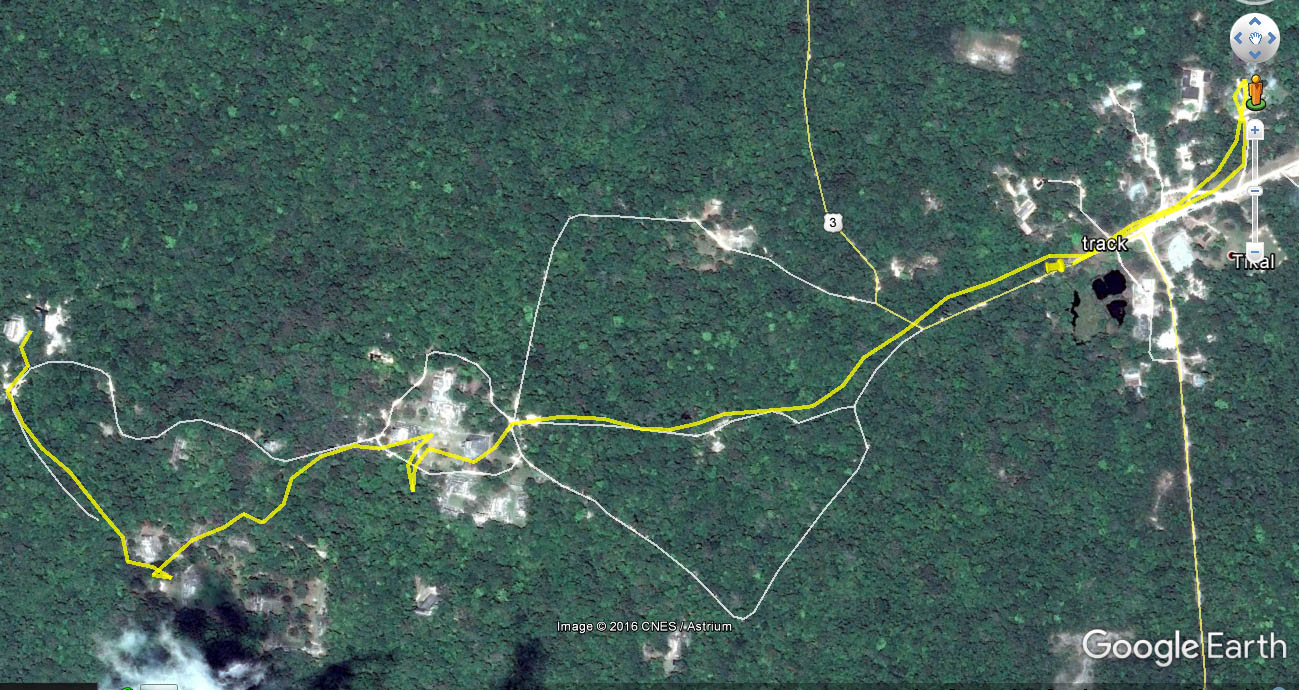 This entry was posted in 2016, guatemala and tagged antigua, guatemala, guatemala2016, oldtownoutfitters, tikal. Bookmark the permalink.

4 Responses to Tikal with Old Town Outfitters – Guatemala in November