While the trails in Nelson (and to a lesser extent, Rossland) get all the press time and exposure in the mountain bike world, in New Denver – Silverton in the Slocan Valley, a network of trails is getting built and ridden to rival the best of what the Kootenays has to offer. While I’ve skied in the Valhallas just west of New Denver, I didn’t know that there were alpine descents in that area.

What tweaked my interest was a writeup in the new Super, Natural British Columbia tourism guide “Bike Vacations: Kootenay Rockies“. Ignore the geographically unfortunate title and focus on the description of Idaho Peak/Wakefield Trail as “dreamscape 360-degree panoramas, followed by epic vertical, high speeds and heaps of flow“. Mitchell Scott is a connoisseur of trails, and when Mitchell Scott writes a description like that, there’s only one thing to do — find out what he’s talking about for myself!

My Kootenay’s road trip had already take in one alpine ridgeline epic in Rossland’s Seven Summits. From Rossland, New Denver/Silverton (I’ll call it New Denver for simplicity although for the record they are two separate municipalities) is about a 2 hour drive due north along Highway 6 up the Slocan Valley and is one of a series of communities along Slocan Lake. We got there while they were hosting the Valhalla Summer School of Music, an event which adds 30% to the population of New Denver’s 650 residents. Restaurants get booked quickly during the summer rush so be warned and make reservations! 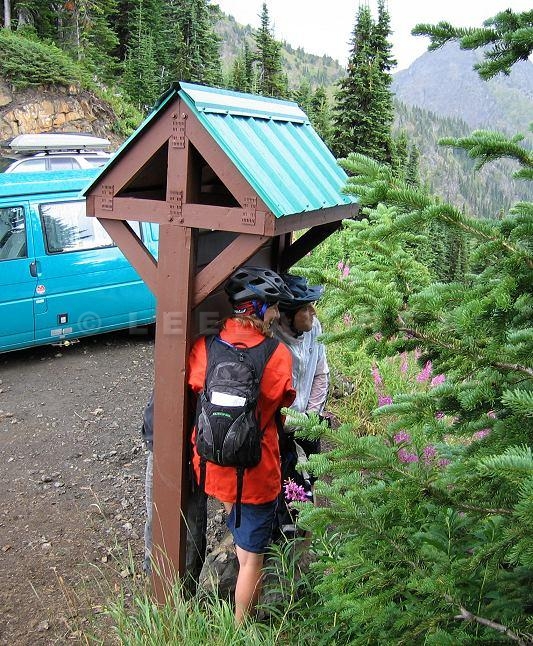 Shelter from a Kootenay storm.

Being clueless newbs to this area, we chose to shuttle. There is a fire lookout at the summit of Idaho Peak. A winding road, built to access this lookout, goes all the way to the Alamo parking lot located at the col between Idaho Peak (2282m) and Selkirk Peak (2324m). Silver Ridge links these two peaks. It turns out that the road from New Denver to the parking lot and the climb itself isn’t really that difficult – approximately 26.5km over 1600m with a gradual climb on the first leg to Sandon and getting steeper thereafter.

The road is in decent shape and is easily navigated by a 2WD vehicle. Althought narrowing as you approach the top, the greatest hazard may be pulling out on some sections to pass nervous drivers.

Here are some guidelines for time management for different ways to ride this route.

Shuttling: We managed to hire a local to drive us up to the top. It takes about 1 hour to drive to the top. The ride down for us to Silverton then the 5km of road-ride north on Hwy 6 back to New Denver on a road with a nice shoulder (with lots of photos and gawking at scenery) was about 1.5 hours. If we hadn’t had the shuttle to the top call it about a 4 hour ride as you would have to retrieve a shuttle vehicle.

Climbing: The next day we rode part of the uphill with Jorg Becker, a local who holds the unofficial record for climbing to the Idaho Peak parking lot (62 minutes timed from Sandon to the parking lot). I figure that the climb itself from town would take 2 hours at a leisurely pace either by climbing on the Galena trails or on the highway. So call that about a 4 to 5 hour pedal-powered round-trip. 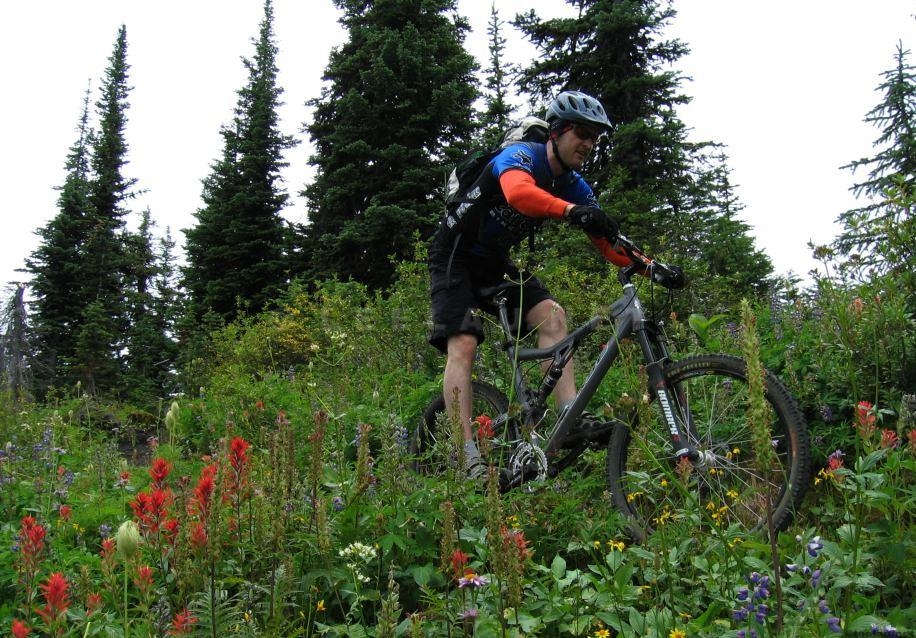 Indian paintbrush on the descent of Idaho Peak singletrack.

Our ride started from the Alamo parking lot. The idea of hiking the short distance to Idaho Peak proper and taking in the 360-degree view from the peak to the Valhalla’s, the New Denver Glacier, Kokanee Glacier, the Goat Range and other Kootenay landmarks was enticing but some stormy weather was coming in from the south. Given that we were wearing bike shoes with metal cleats, the idea of hiking an exposed peak on Silver Ridge anywhere close to a lightning storm didn’t seem prudent. Instead we waited out the storm under some shade and took in the views. 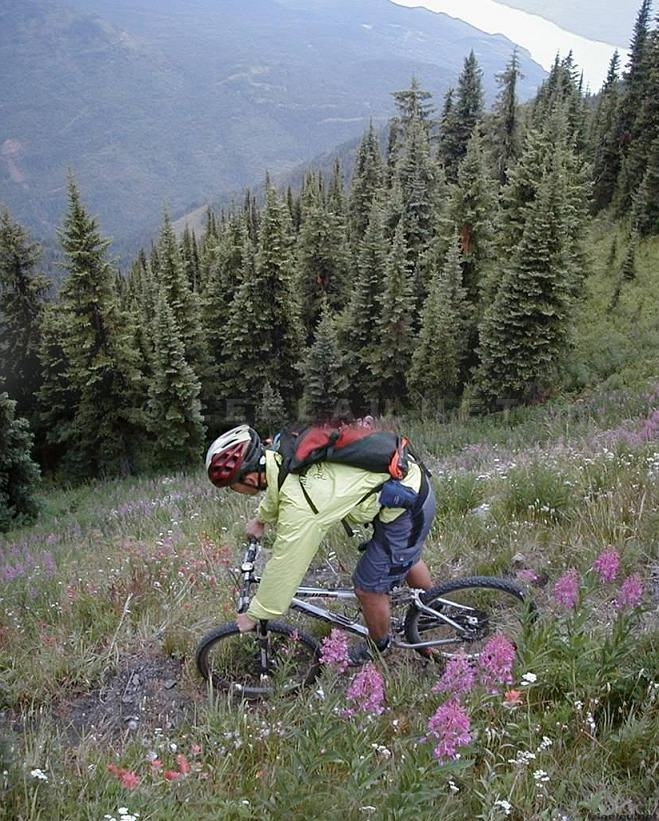 The long way down the Wakefield Trail. Photo ~ David Diplock

Packhorses servicing camps of miners living on Silver Ridge first built the Wakefield Trail. They have left tokens of their enterprise and skill as reminders to us that it wasn’t all about play. 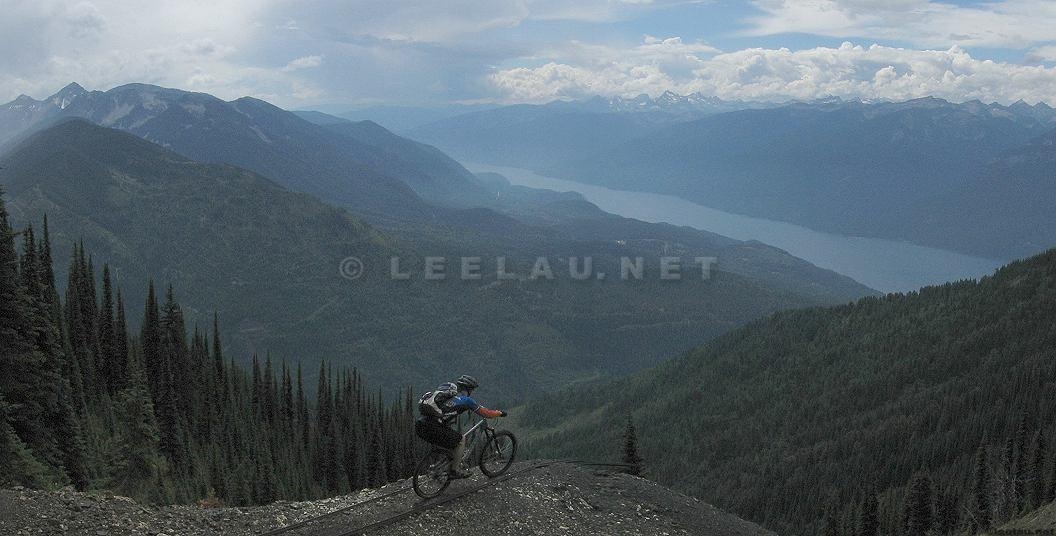 As with all Kootenay singletrack, the views are horribly distracting and the singletrack incredibly narrow with frequent switchbacks acting as speed-checks and keeping one focused.

We missed the prime alpine flower season by about three weeks. However, it’s rained recently on Silver Ridge and even the usually dry south slopes are lush-green. This means that the trail is beautifully tacky and in great shape. I would imagine that dust could be an issue during a dry spell. 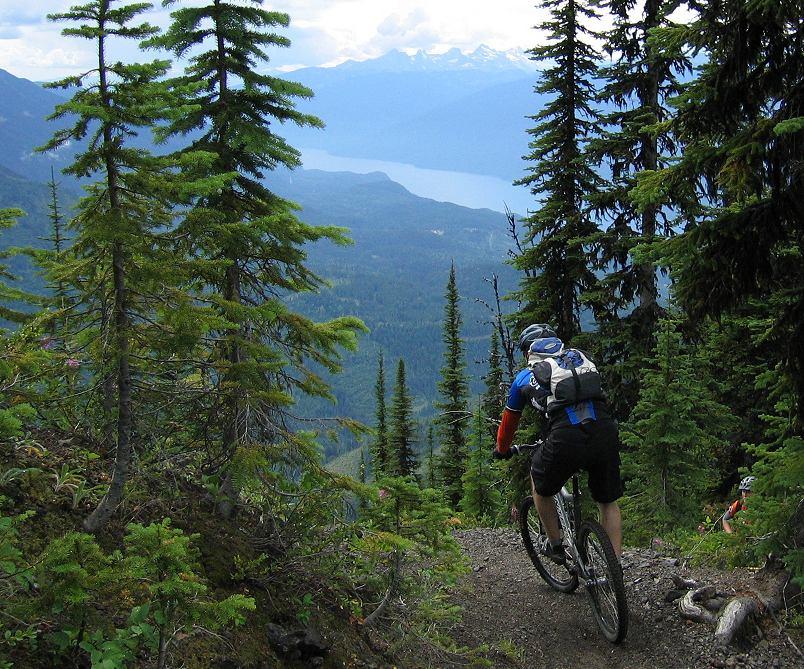 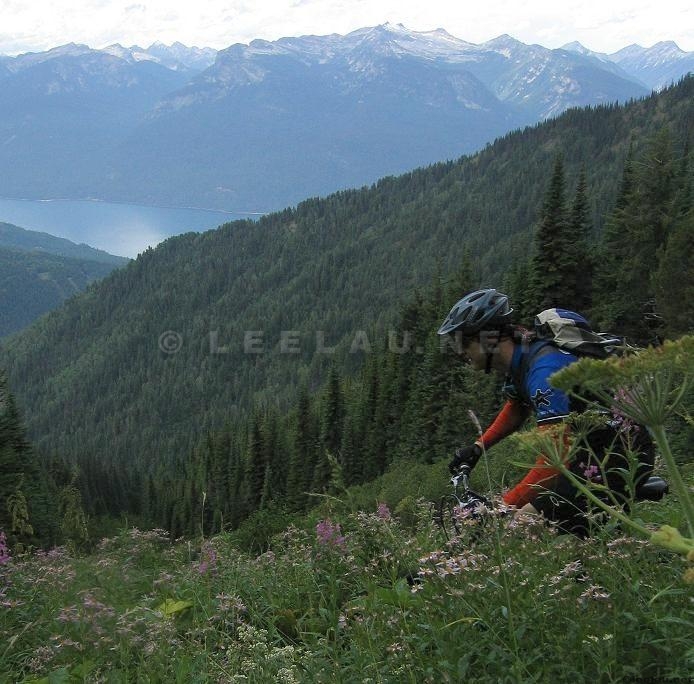 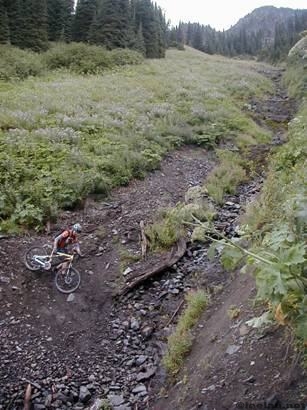 I’ve ridden some ripping alpine singletrack but I’ve never, ever seen singletrack which so epitomizes the meaning of “single” track; narrow tires-width in most places, covered with pine needles, trailbed in pristine shape. The trail itself is beautifully bench-cut, which probably explains in large part why it’s in such great shape. Apparently, the Wakefield

Trail doesn’t see a lot of traffic. There simply aren’t many riders – either local or visitors – in the New Denver area. 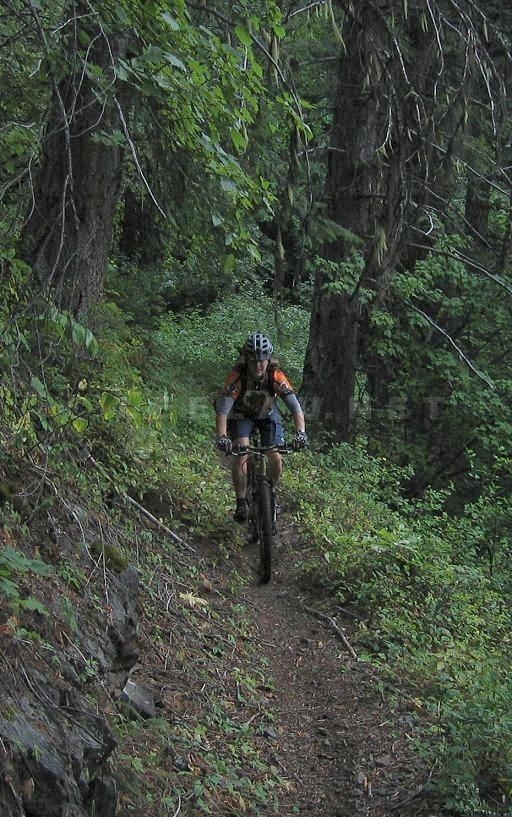 The flow of this iridescent emerald green-lined trail doesn’t want to quit. Switchback after switchback, turn after turn, followed by ripping fast sections where you release the brakes keeps on coming. 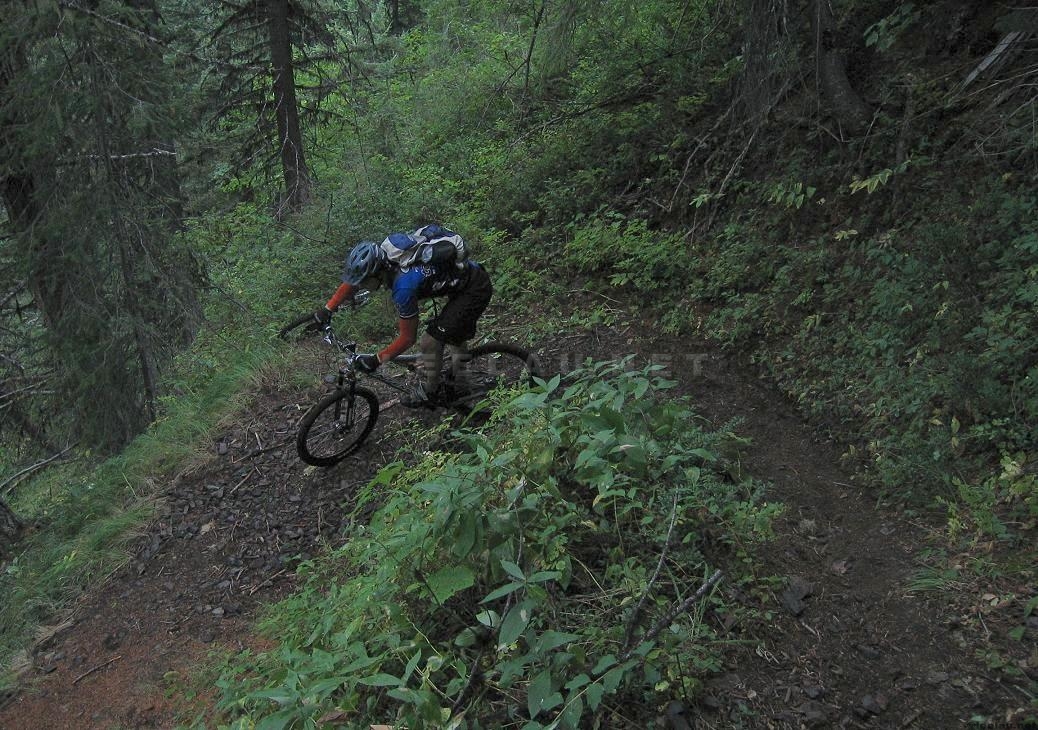 All good things do come to an end and just when we think our brake fluid boileth over we’re on doubletrack which then becomes a forest service road coasting us down to Silverton and following that, a road ride back to New Denver. 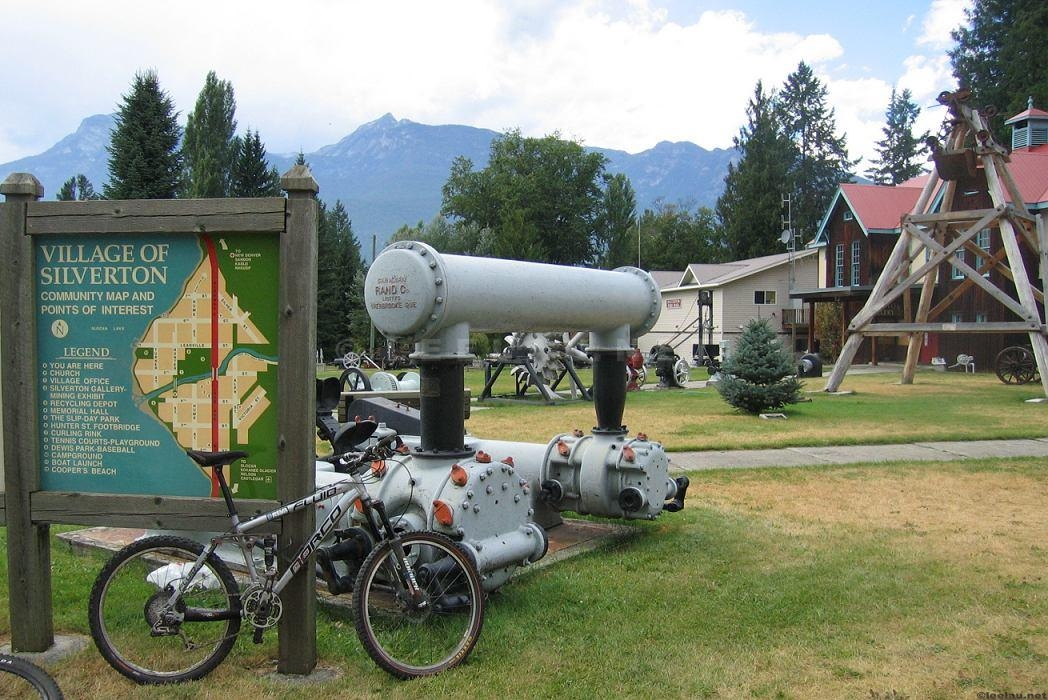 The next day the weather still looks dicey although the light frames the climb to Idaho Peak very enticingly. 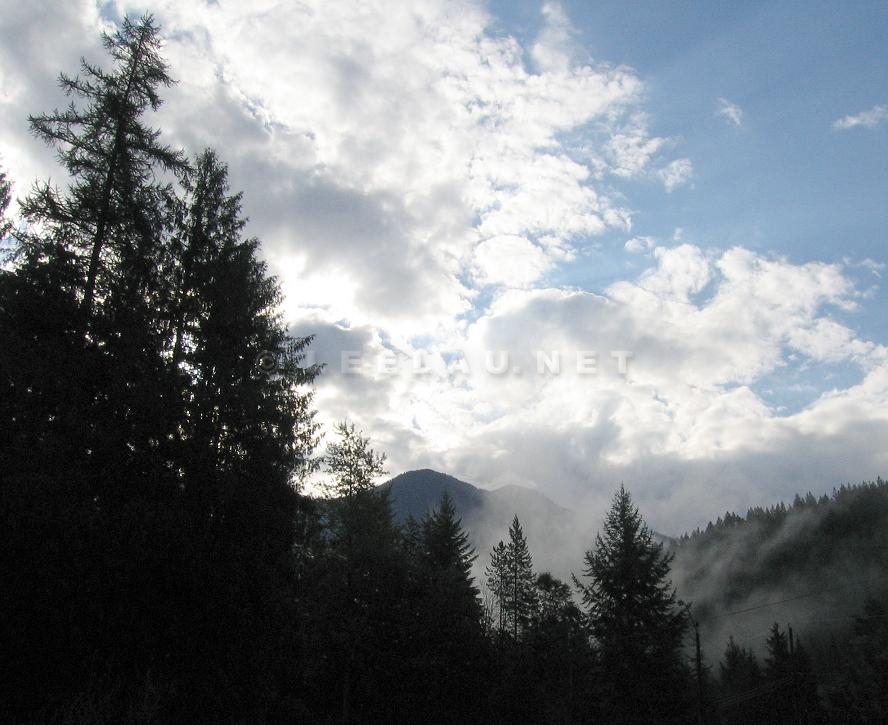 We meet up with a local, Jorg Becker, who offers to show us some singletrack climbs and descent which will take us around Three Forks and Sandon. 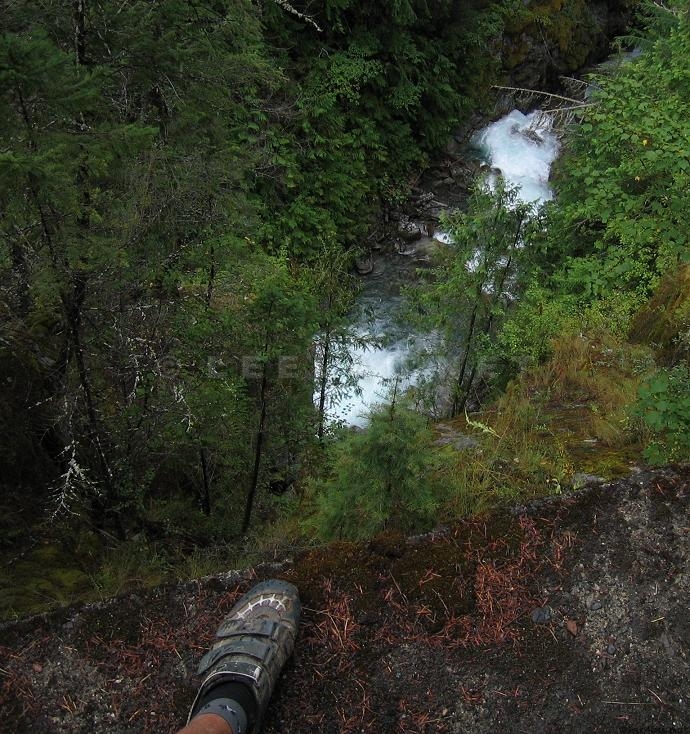 Carpenter Creek from the Galena Trail.

The Galena Trail and the H-Road climb is part of a network of rail-to-trails non-motorized recreational trails and climbing singletrack which takes you from New Denver to the Idaho Peak climb close to the Queen Bess fork on that same road. It’s a great way to climb from town to the Alamo parking lot. Along the way you get to experience a rather unique way to crossing a creek – Carpenter Creek in this case. 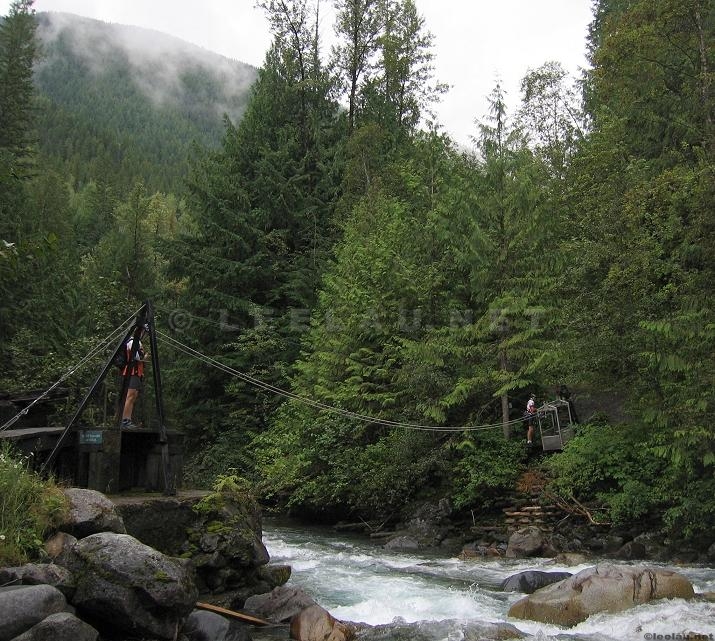 Quite a thrill and a nice way to avoid getting your feet wet, the cable car was installed by volunteers in 1997 and replaces an old trestle that once crossed this section of river called “Alamo Siding”. 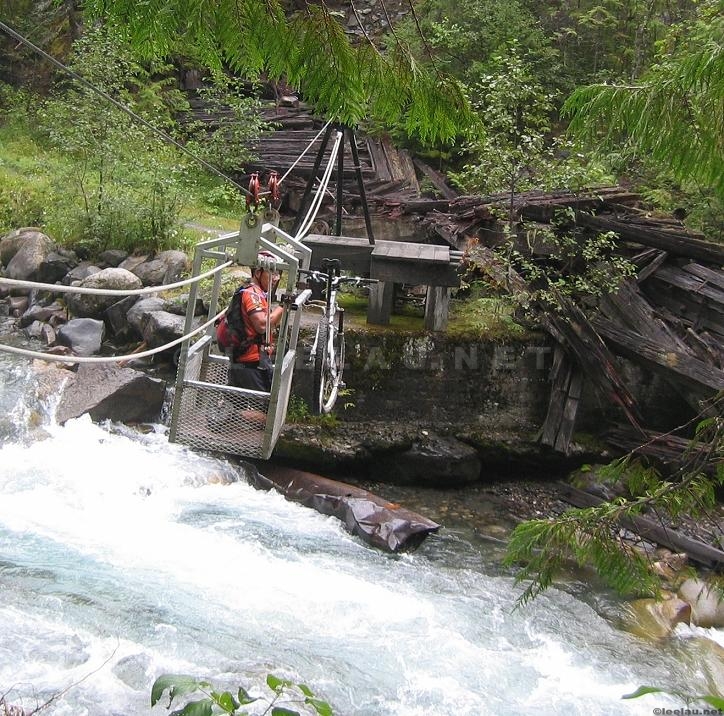 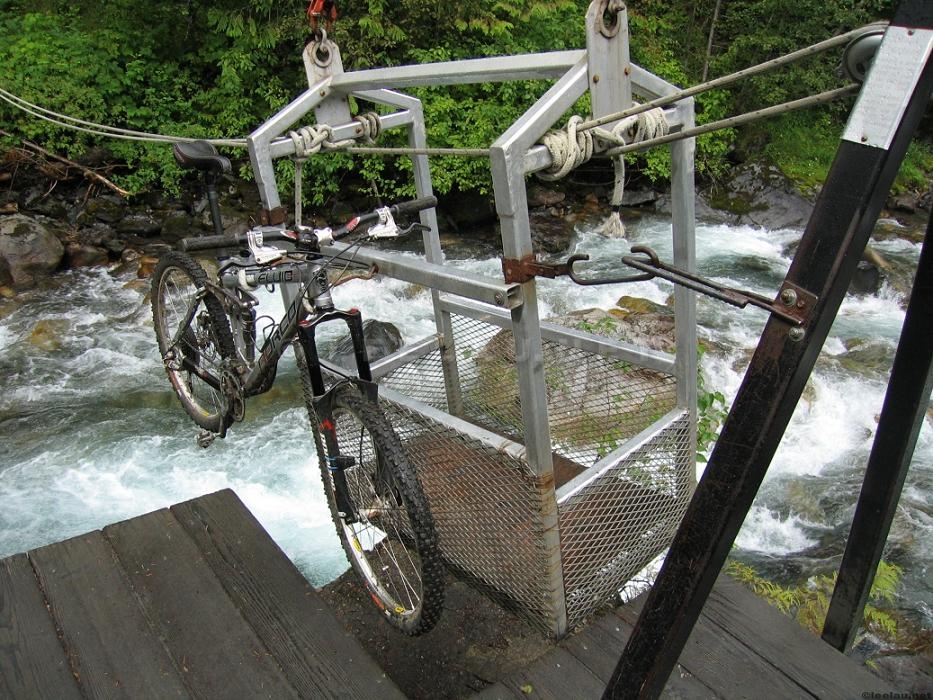 A Norco above fluid water.

The ruins of many old mine buildings are still in place, the concentrator at Alamo Siding is among the more impressive examples of what happens when flood-waters wreak havoc. Once 200 people lived and worked here, “working three mines, an ore concentrator and a hydro-electric plant.”

Branching off from the Galena, H-road’s singletrack climbs up through remarkable coastal-looking rainforest up the flank of Idaho Peak to the road that climbs to the Alamo parking lot. 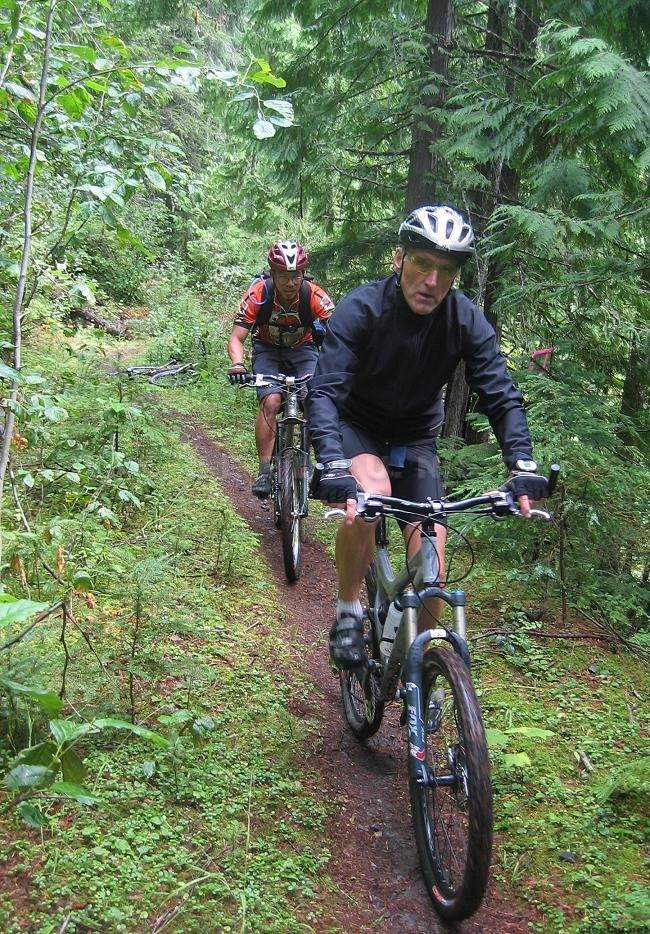 We made a loop of this ride by descending the road to Sandon then taking the K&S Trail on the north side of Carpenter Creek back to town. This entire ride is full of history which I can barely touch on in this article. Sandon was in its heyday, B.C.’s largest city, with over 5,000 inhabitants. It had red-light districts, bars, warehouses, hotels, breweries, schools, a curling rink and an opera-house but is now largely deserted. The K & S Trail (or the Kaslo and Sandon Rail Line trail) is another rails-to-trails effort that starts out mellow but then descends in tight, twisty and steep fashion back to Three Forks and the Galena trails. 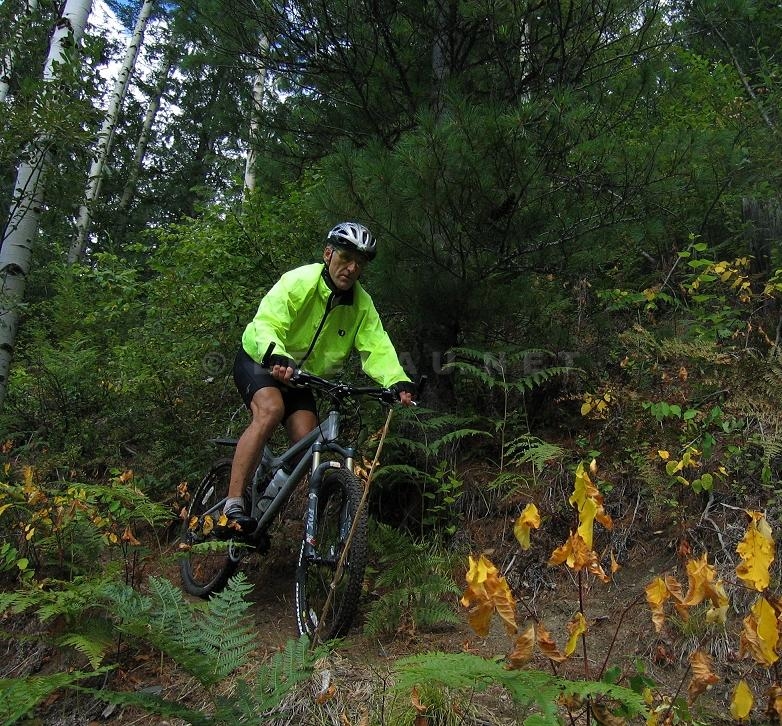 This profile of our first day’s ride – Idaho Peak/Wakefield – is a ride profile to warm the heart of any shuttler. Over 1500m of descending; of which over 800m is on pristine singletrack and only 55m of ascent. Seen on the trail – a few mine-shafts, some rabbits and marmots, some bear-scat, and not a single other soul other then one’s riding partners. Spell-binding and highly-distracting views of the Valhallas, Kokanee Glacier, Slocan Lake all included. 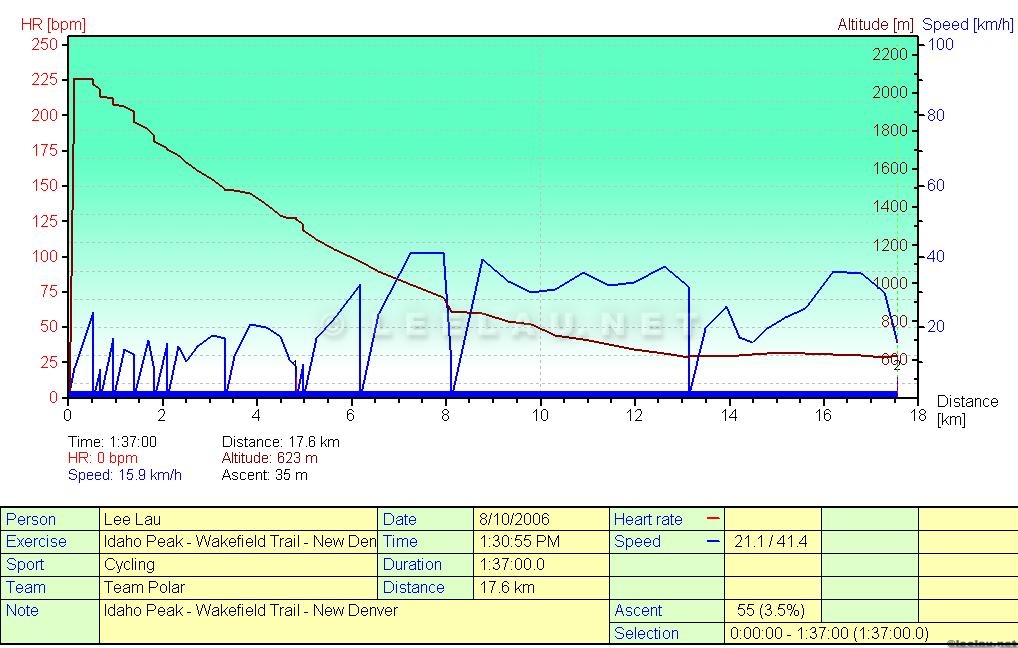 A graph to warm the heart of any shuttler – Idaho Peak – Wakefield trail descent. Plotted with a Polar HRM.

Although there is an awful lot of trails that we didn’t explore in New Denver I wouldn’t say that the area itself has the variety or abundance of the Rossland trail network or the challenge of Nelson. What it has though is very special and very unique to an area that has very few crowds. The trails are so uncrowded and pristine that you are literally, at times, riding over moss growing on the established trail. While one would never mistake any Kootenay trails (whether it be in Silverton, Kaslo, or Rossland) for the take-a-number madness of certain North Shore trails on a weekend, there is something to be said for riding in an area where you literally won’t see anyone else the entire day without trying very hard to get away from it all.

If you want a not-too-technical “flowy” high-alpine experience on narrow singletrack with stunning views and a heavy dose of history, visit New Denver and Silverton and ride Idaho Peak’s Wakefield Trail.

Some other places and resources of note (no web presence) 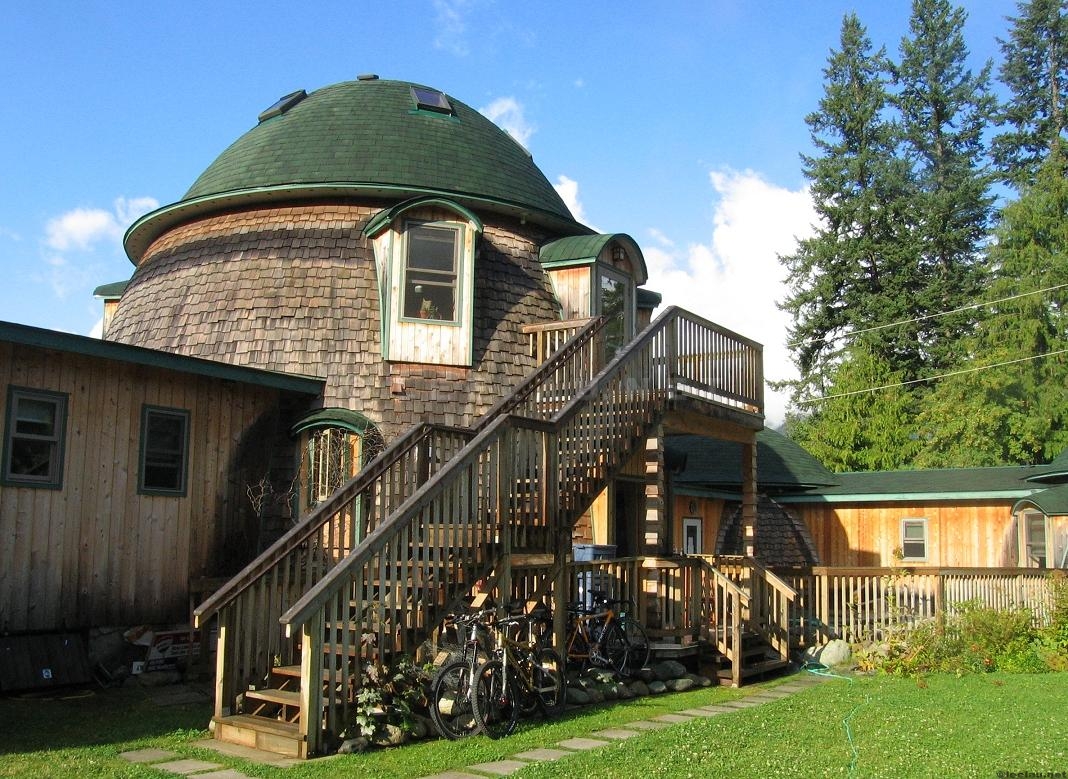