Useful links: Day two came early and I for one was feeling the 1700m of climbing from the day before. Today we planned to drive to Jewel Creek access to the Gun Creek climb, head up to Windy Pass via Spruce Lake then over to Lick creek. The drive from Tyax to Jewel was pretty far! But for me it was worth the drive to save the legs. 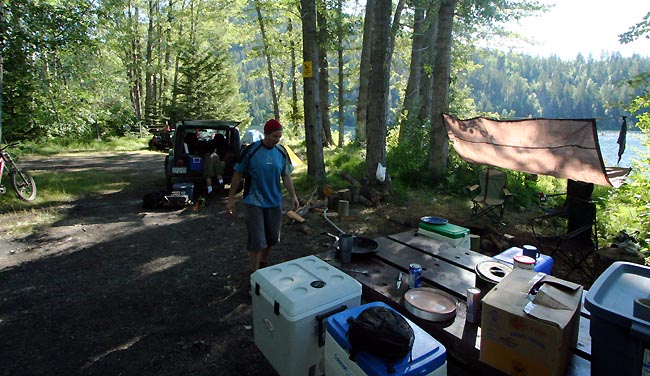 Camp at Freiburg Forest Service Camp Site next to the lake 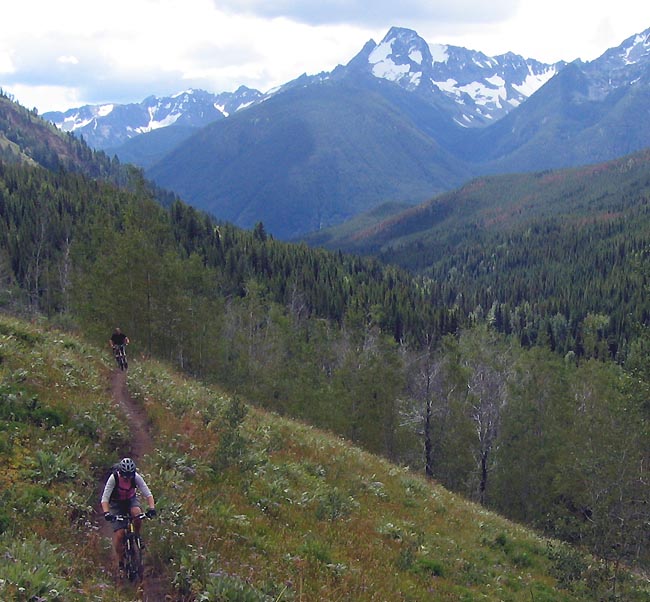 Chris climbing to Spruce Lake. Open Heart and Sheba in picture centre with the views to Mt Warner further down Gun Creek to picture left

Dave and I turned around at 1850m about 200m shy of Windy Pass and headed back down Gun Creek trail through the meadows retracing our route. Still a worthy ride. On the drive back to Tyax we saw a pretty big Grizzly beside the road! We didn’t stop to take pictures…

The rest of the group continued to climb. Lee continues …. 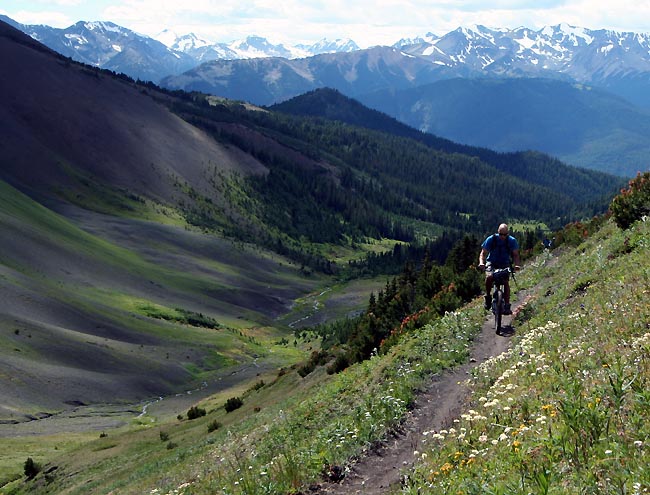 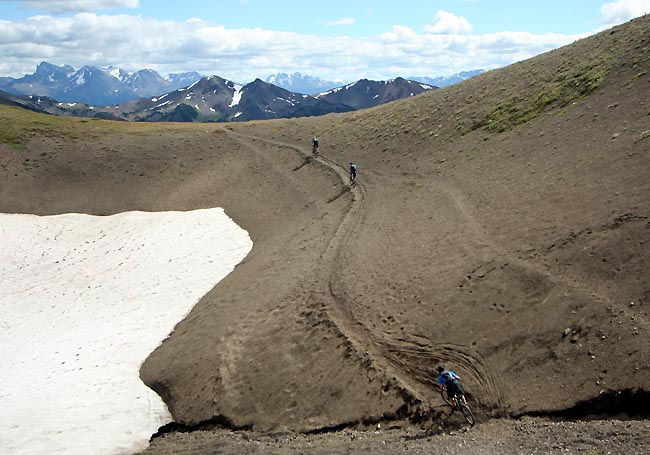 Finally at Windy Pass after an hour and a half climb from Spruce Lake ~ elev. approx 2100m

I kept dragging the boys up to Windy Pass where we eventually topped out at about 2100m. I had challenged them to make the climb from Spruce to Windy in one and a half hours just to see if we could keep up a decent pace and also because I wanted a decent amount of time to try an alternate route off Windy to the Eldorado basin and the Eldorado Creek drainage.

but wait… its not over yet. Kevin climbs to the top of the LS Bluffs from Windy Pass

This route is marked on the map as the LS Bluffs trail. It goes up the ridge directly south of Windy and tops out at 2350m before dropping a nice 600m back to the Eldorado drainage. It appears to be mostly a horse pack route that I suspect is used mostly by Chilcotin Mountain Holidays which maintains a cabin in the area. We didn’t see a whole lot of horses in the area as we pushed and rode our bikes another 250m up this rather steep slope to the top of the ridge. 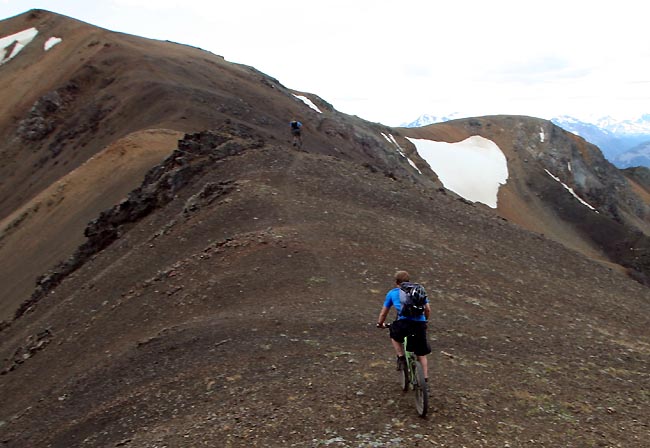 Chris on the ridgeline climbing to the top of the Bluffs 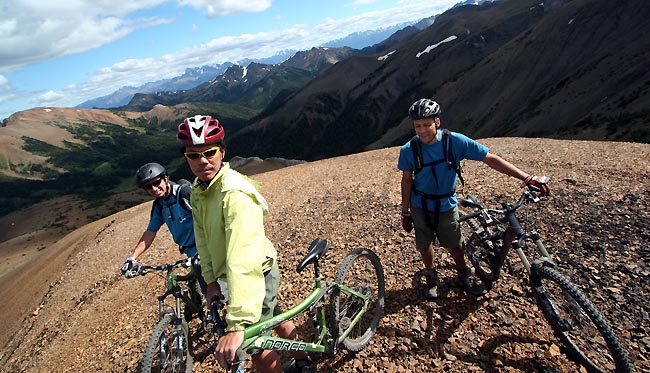 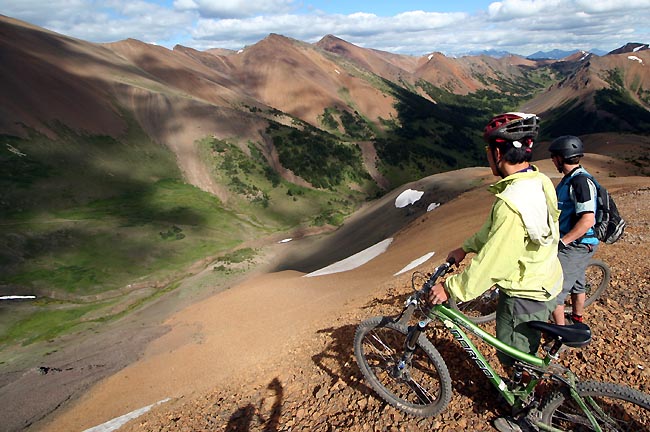 Kevin, Lee and Trevor at the top of the Bluffs at about 2350m. The bottom picture shows our path down to Eldorado Meadows – our route will wind down the ridge

There’s really not a whole lot to say about this route. It’s fairly easy to find off the ridgetop and one does not need to get distracted by some hiking trails that wander back and forth along the ridgeline. The way is straight down and winds along the ridgelines like a drunken anaconda in need of a good back massage; then sinuously entering verdant green forest which was also very conveniently demarcated by a swathe of alpine flowers in drunken chiarusco colours.

To say that its a stunning descent is to demean the word. It’s really all we could do to close our mouths and not gape at the scenery while mach-schnelling down the scree slopes and the windy singletrack. 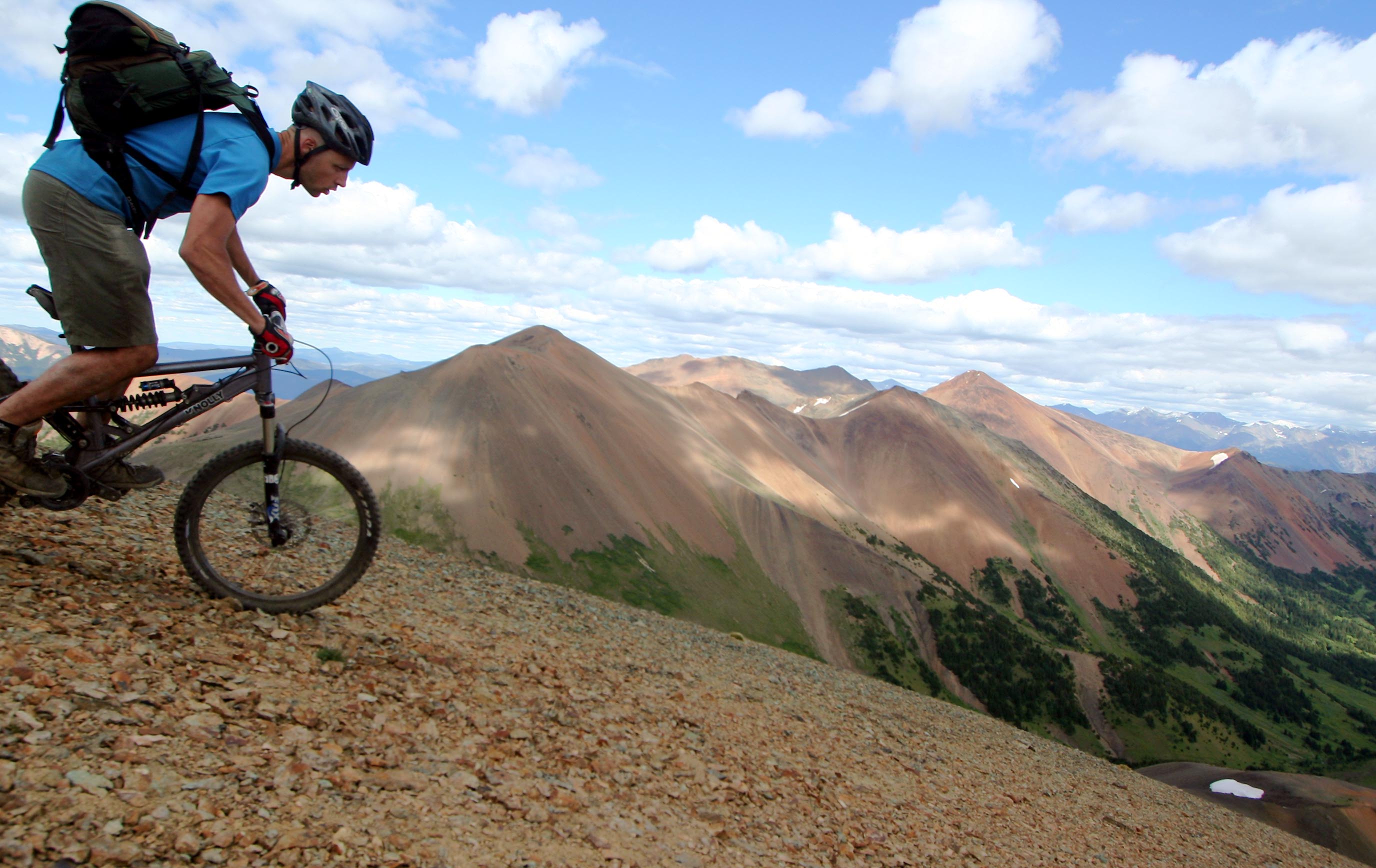 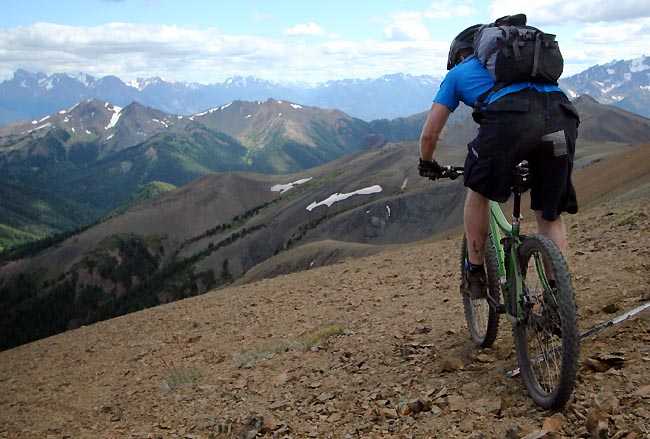 Trevor and Chris start down the scree to the ridge

Chris with the Dickson Range in the background 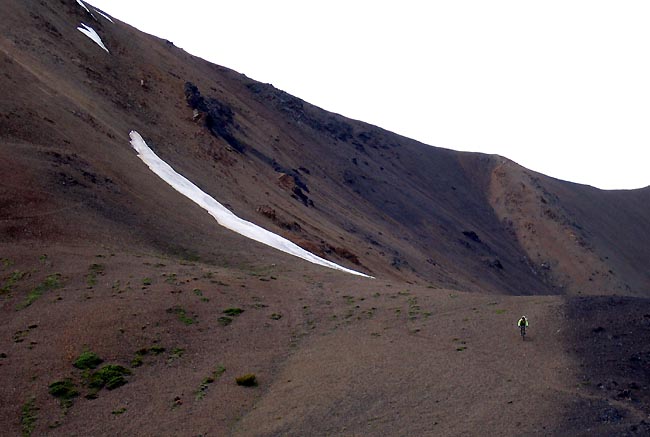 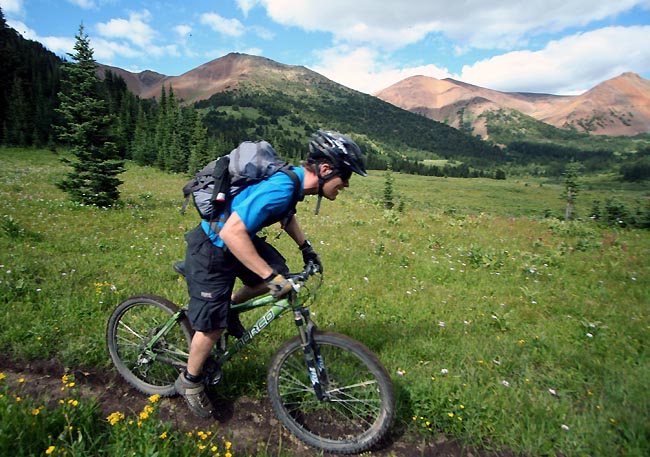 Chris on the approach to Eldorado Meadows after the 600m downhill 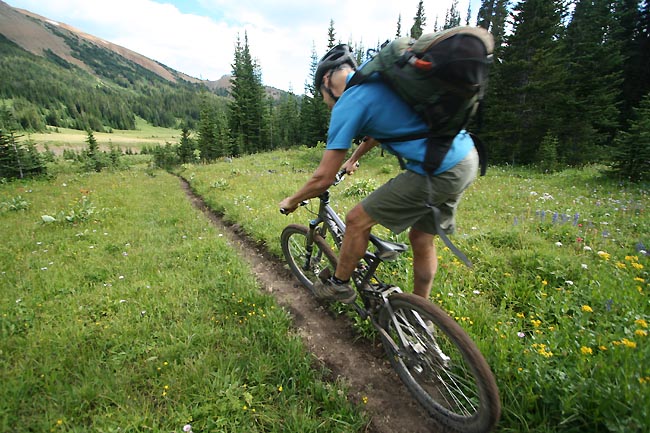 Trevor in the meadows

In no time at all we were down in the meadows back to the same spot where we were only yesterday. Fortunately the weather was a bit better and the trails had, by now, nicely dried out. We were surprised to see a group of riders in the meadow – they looked rather bleak and worse for wear having had a glorious deathmarch of four days from Taseko Lakes some 60 kms to our west. I was not unhappy to have passed up on the opportunity to also have done such a deathmarch given the doubtful weather of the past week and we pressed on towards the Eldorado Cabin and then to Lick Creek. 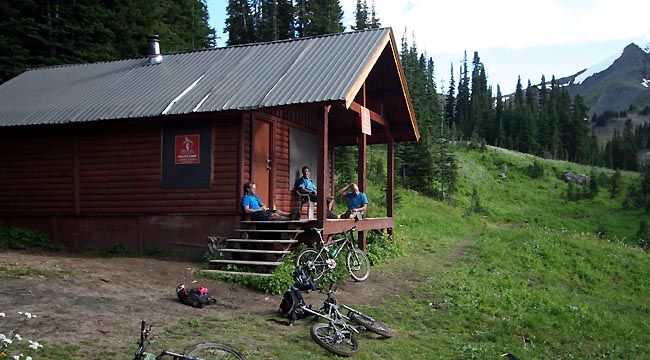 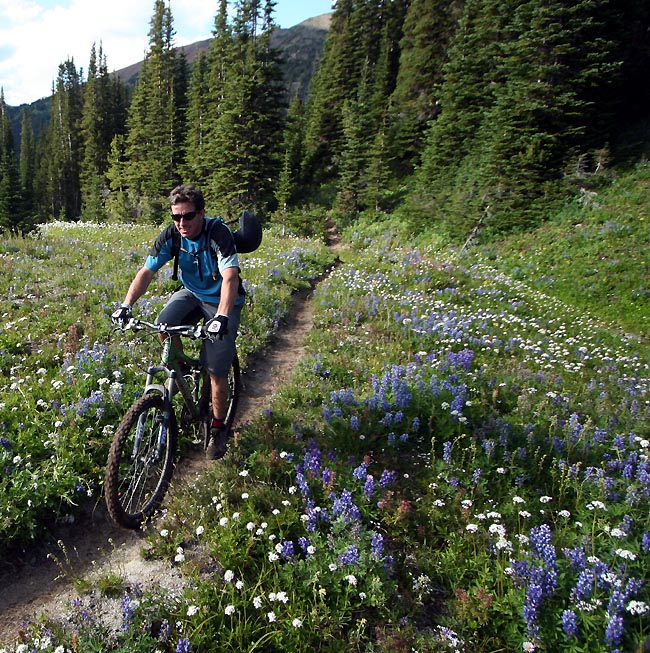 Kevin in the meadows 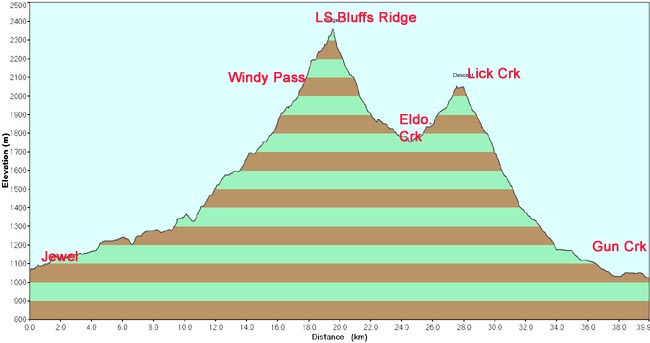 Map of our route.