Another Victoria Day long weekend in Vancouver brings lousy weather. We’ve had crap weather the last 4 years in a row so I’m not entirely sure why anyone is surprised. Regardless, I scrap my plans to solo climb Mt. Garibaldi and follow my wife Sharon to Kelowna. While Sharon practises aikido, I plan on riding a trail system in Westbank known as McDougall Rim. As a general note, even if you choose to drive to the trailhead expect to have a sense of adventure and enjoy exploring and getting a little lost if you want to truly experience this area. 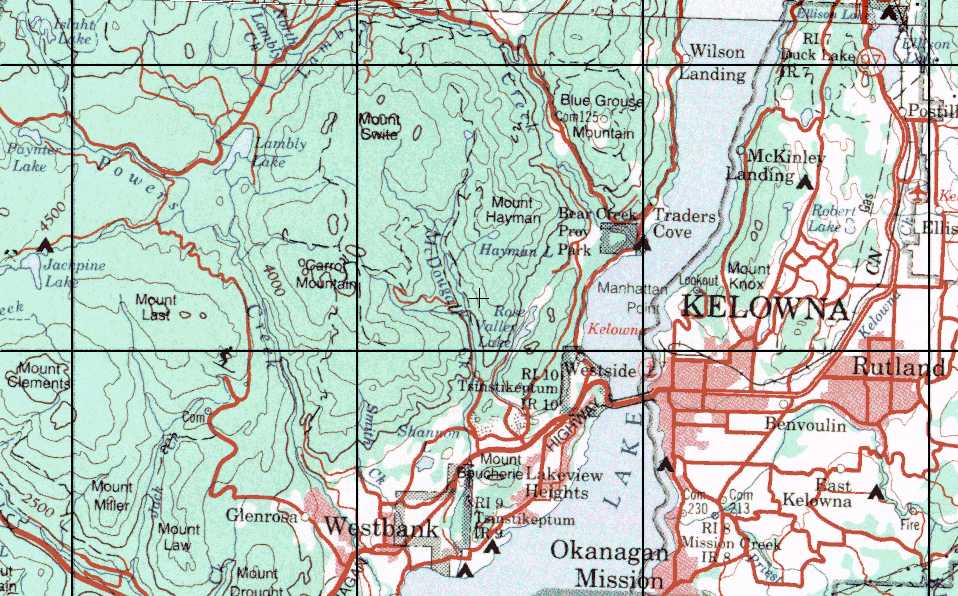 It’s not that easy finding maps or guidebooks which describe this ride. This perks my interests as rides that are in guidebooks are often overrun and gorby-fests. This ride is described in Darren Polischuk’s and Steve Dunn’s notoriously inaccurate “Mountain Biking British Columbia” guidebook – which guidebook in my opinion doesn’t even make good toilet paper as the paper is too thick. The general area is also described in the Backcountry MapBook Kamloops Okanagan volume. However, I am glad I brought along 1:50,000s, map and compass as the Backcountry Mapbook is also sadly inaccurate.

Polischuk and Dunn’s garbage guidebook describes this trail as 20kms long. I am riding from a friends’ place in East Kelowna which I figure is 8kms distant from trailhead. First miscalculation; riding to the trailhead is actually 12kms.. whoops.

Then I plod uphill past orchards and some gorgeous views of Okanagan Lake before hitting the trailhead. Lots of trucks around; bunch of ATVs; no bikes. Hmmmm; maybe I’m missing something. Below is a general map of the area I rode with some notes. Unfortunately I have no idea how to use my graphics program to do anything more then insert notes.

As a general note the area west of Hidden Creek is all forest service roads which I rode counterclockwise. I stopped along the way to summit Carrot Mountain and Mount Swite – both inconsequential bumps which summits I had a hard time finding.

As another note the trails north of the area I marked on the map as the MainLine lead either west or to dead ends. The McDougall Rim trail that is marked on some guidebooks a existing west of Hidden Creek simply does not exist!

It took me about 60km of riding and 1500m of climbing to find all this out of course. Too bad as I wasn’t getting the promised rock and alpine flowers touted as the highlight of the trail. Luckily I ran into an old-timer hiker who’s explored a lot in this area who then set me straight. 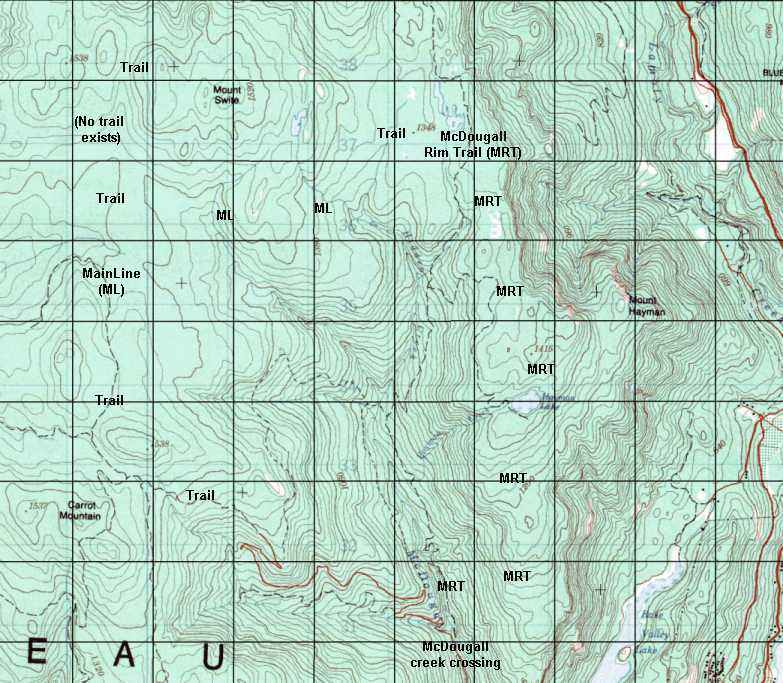 Here’s the navigation points then for how to access the McDougall Rim trail as it exists east of Hidden Creek from the MainLine with some notes of other trails to explore in that same area.

At km 27 on the ML look north at the west edge of the clearcut. There is an ATV trail which meanders north of the ML until dropping back in to the ML at km 25.

At roughly km 26 you hit a 4 way crossing. Hidden 400 FSR heading east dead-ends at a landing. The FSR heading south dead ends at Hidden 500 and Hidden 600. The north fork is the ML. Proceed north on the ML which then turns east and at km 25, immediately after the ATV trail/singletrack rejoins the ML, look south. There is a trail which follows Michel Creek down to the McDougall Creek FSR. It is reportedly passable but has some blowdown.

Then keep going east past Hidden 200 and Hidden 100. There is a trail at Hidden 100 which rejoins the McDougall FSR and allows one to climb to Hayman Lake trails and the McDougall Rim trail but trail beta indicates that it is very difficult to find the trailhead so be forewarned! If you are stubborn and do want to try, take Hidden 100 and proceed south. Take the 2nd right hand fork which dead-ends at a creek. Bush-whac for 20m to find the trail and good luck!

An easier way to find the McDougall Rim trail is to proceed on the ML. Between km 22 and 21, the road gently sweeps from east to west on a big clearcut. Be alert and look to the right for a trail. There is an ATV trail there and if you see that; the trail is about 20m south of the ATV trail. There’s lots of blowdown for the first bit and the trail is flagged with red tape. On the map above, it follows a ridge to the high-point marked as 1348m then joins the dashed north-south line marked as McDougall Rim Trail (“MRT”). Its fairly easy to see the actual bike trail which comes off the main doubletrack to the east/ right.

By this time, I’m long past my turnaround point of 2.30pm; down to one water bottle and a power bar and at km 65 but eff it… I didn’t come here all the way to ride doubletrack and forest service road down. The first 10km is tough going. Probably easier if I wasn’t a little time pressured but this time of the year has lupins, indian paintbrush, alpine daisy’s and fern gardens growing in shady spots. Really pretty and excellent views of Lake Okanagan.

The last 4kms is sweeping switchbacked glorious buff singletrack descending like you don’t get in the Lower Mainland where all downhills seem to attain the lowest common denominator of skidded churnfest. Then you get 2kms of armpounding motocrossed bermed and rocky doubletrack back to McDougall FSR.

Below is a plot of the ride profile. I get back to my friend’s place just before they call out Search and Rescue, stuff my face full and pass out.

Some crucial waypoints are as follows; all are 10U, and NAD83 of course.

EDIT: There is a great map of McDougall Rim available from any bike shop. I got one from Kelowna Bikes at KLO and Pandosy. Shane at that shop has a lot of local knowledge and is happy to share. On September 10th, 2005, I rode from my friend’s house close to KLO and Benvoulin to the Crawford trails. Climbed up the Lost Lake Loop to KVR (1180m) – about 800m of ascending. I came out at the Lost Lake trail – KVR intersection then about 1km east of that intersection I went into another trail. I don’t know the name of that trail but it was steep enough that I dropped my seat an inch; not too rooty but what roots there were had nice slick sheen. There were some superb rock faces on that trail too. That trail then intersects the Lost Lake trail and carries on down the mountain to Captain Savage (920m) – Lookout

Trail – Racer Loop – Pink Highway. Then I explored the trails above the Upper Benches (about the 750m mark or so) and had a great time. Conditions were superb – cold at the KVR – but luckily I brought extra clothes and gloves as everything got a little wet from the dew and rain on trees.

This entry was posted in 2005, bike and tagged Kelowna, McDougall Rim. Bookmark the permalink.