Words and photos by Sharon Bader and Lee Lau unless otherwise noted.

With the good weather holding up and snow stability also good, Alex, Paul, James and I headed to the Duffey. I’d been eyeing a combination line and managed to talk them into an attempt to link Matier’s East Face with the prominent couloir that splits the Twin One Glacier. It definitely looks aesthetic but I had no real idea of whether it would go.

We made good time to Matier’s peak taking 3.5 hours to get there by noon. This gave us time to wait for valley fog to clear and for Paul and James to ski off Matier’s subpeak above the NW face. It started clearing up an hour later and we skied off Matier’s East Face in hero knee deep powder snow. Then it was pretty routine navigation over to the top of the Twin One Couloir. Setting up two raps and clearing out some cornices took some time so we didn’t start skiing down till later in the afternoon. Snow was not so great (3 – 5cms of soft snow on top of firm hardpack) in the top part of the couloir – which was also the steepest so turns were pretty conservative. The main apron mellowed out to high 40s then 45 then to a lower bench opening to the Twin One Glacier and out. Here the snow was excellent – knee deep powder which could be sluff-managed. Because we were a bit cavalier with time and due to the length of setting the rap stations it got dark in the last bit of the couloir so we ended up skiing the last bit of coulour, then out to Anniversary/Twin One Col and the rest of the way out of Cerise Creek by headlamp.

from Lee Lau on Vimeo. 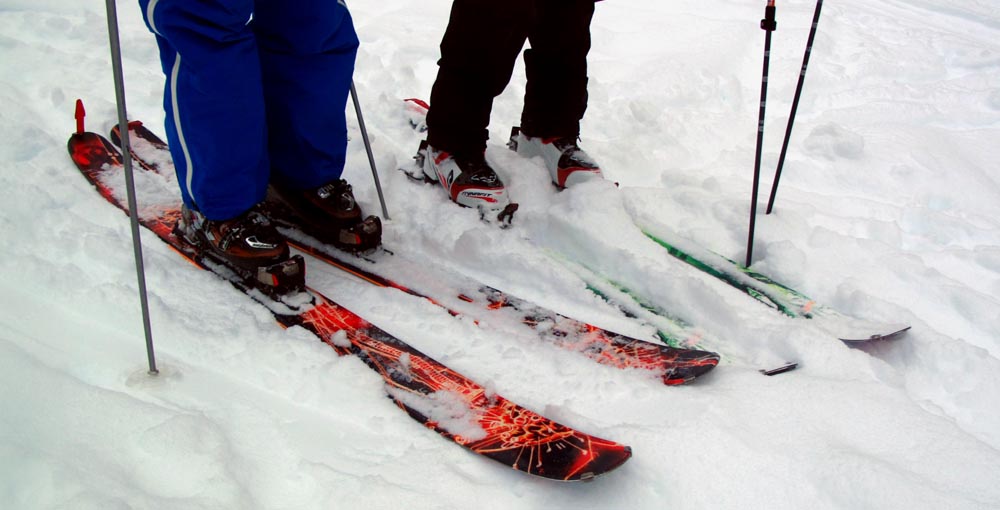 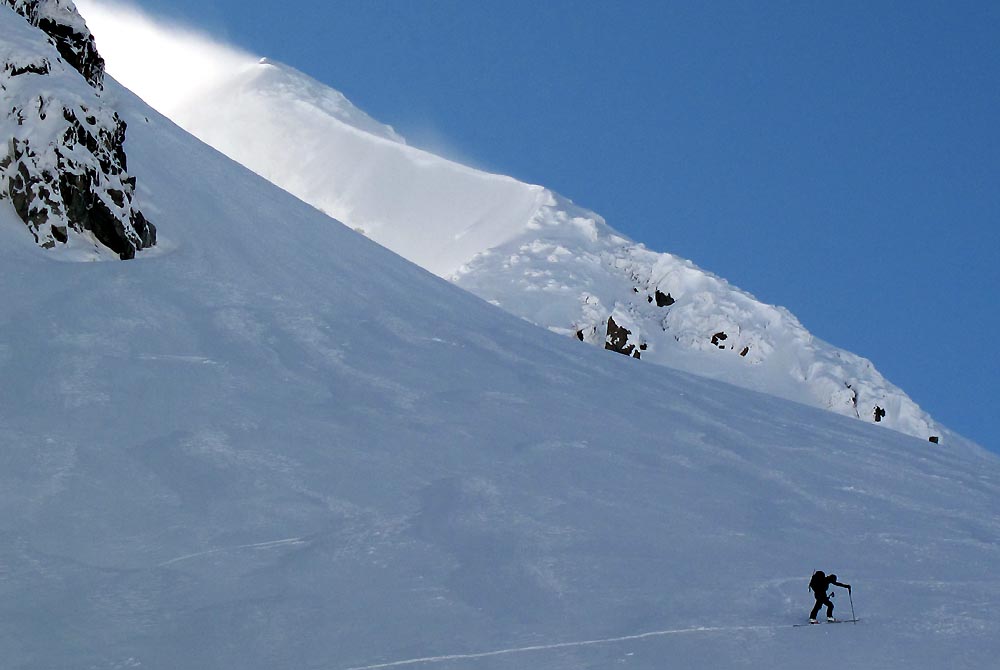 Alex on the Anniversary Glacier at ~ 2400m

just breaking out of the valley fog 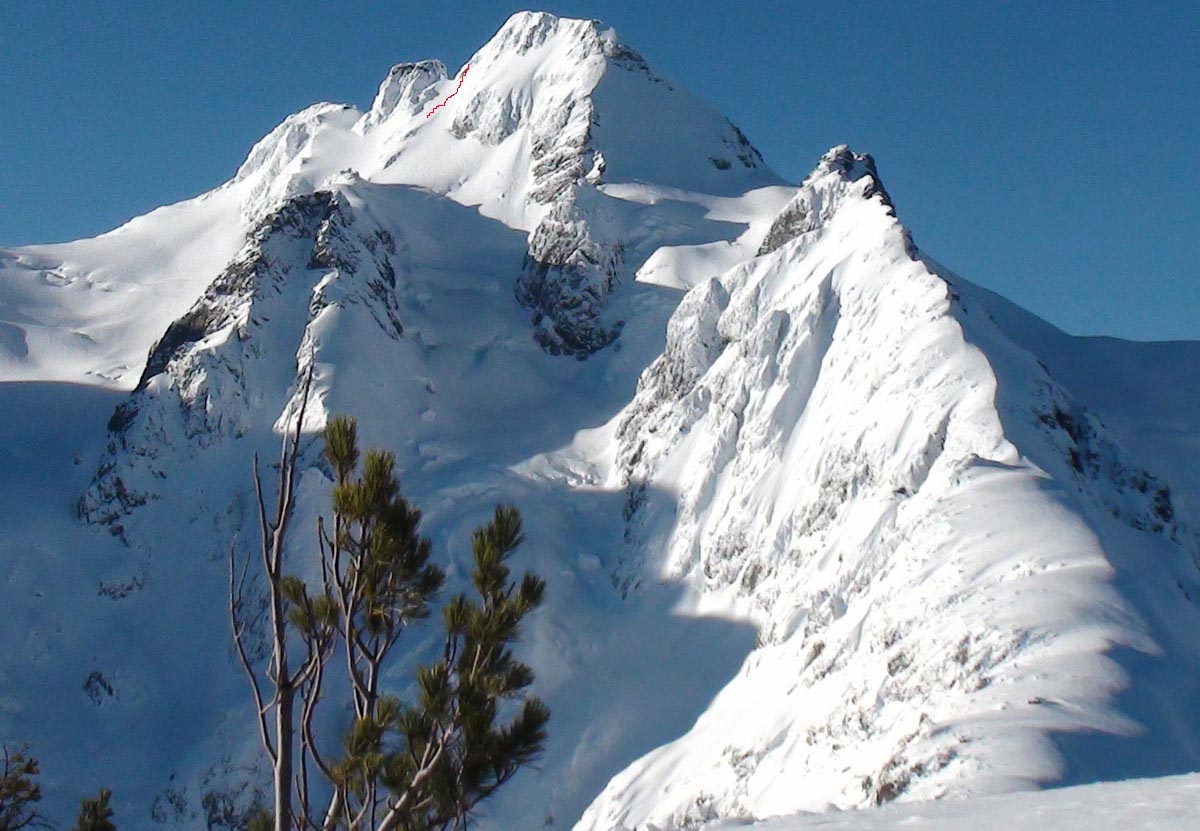 Picture of the entire line we want to ski. Matier at centre of picture 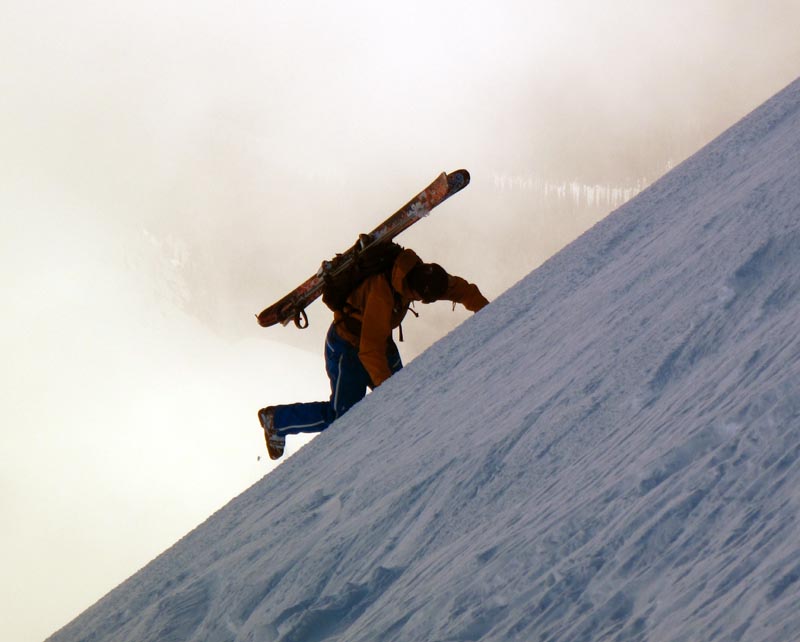 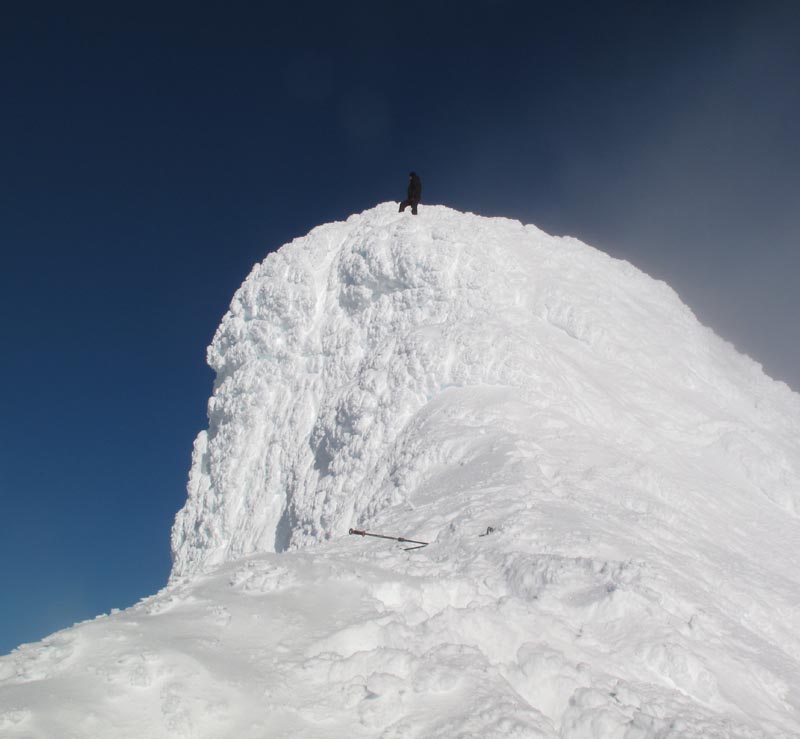 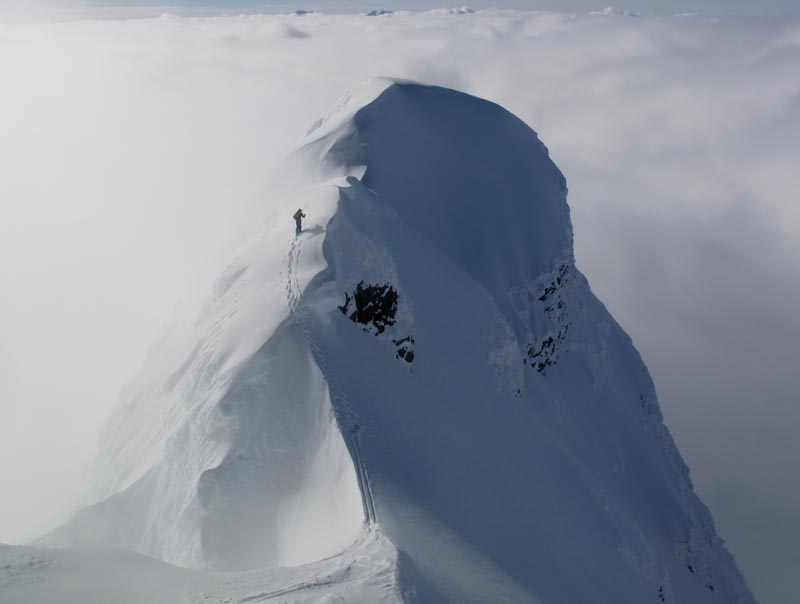 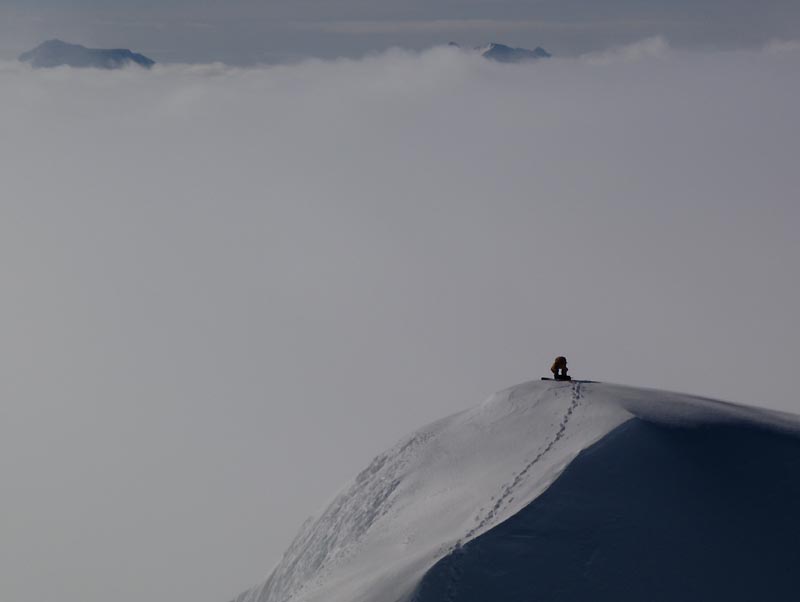 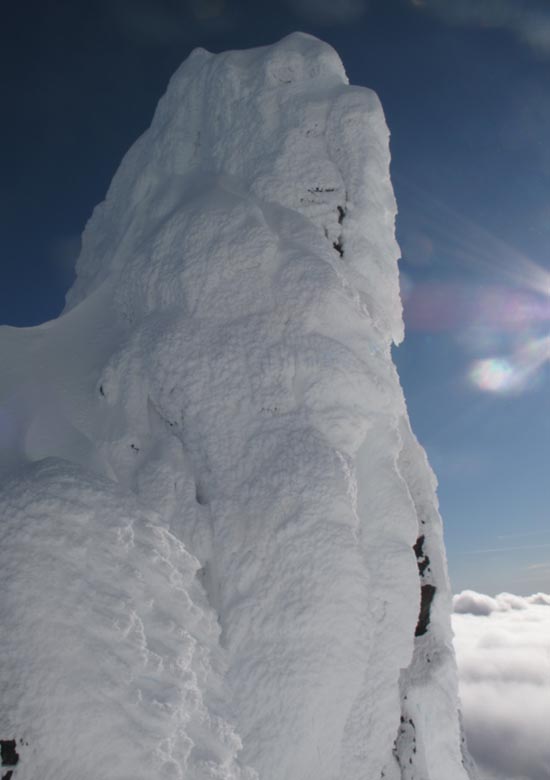 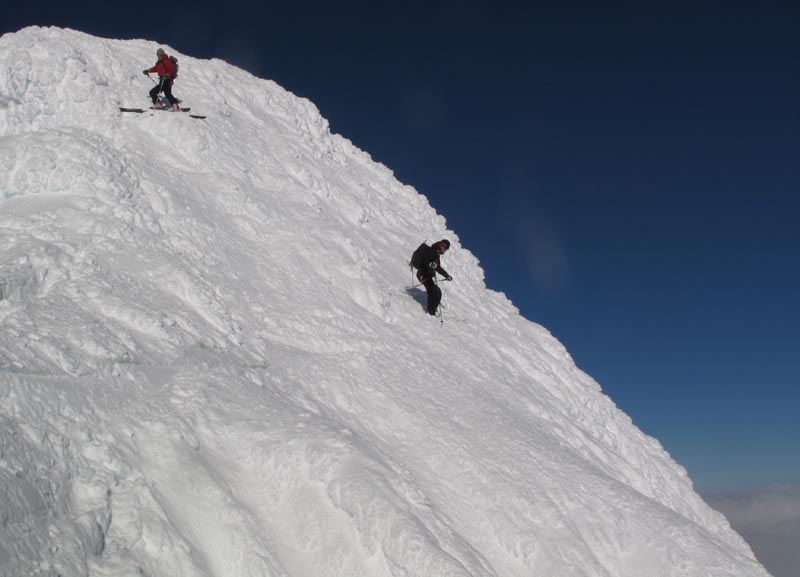 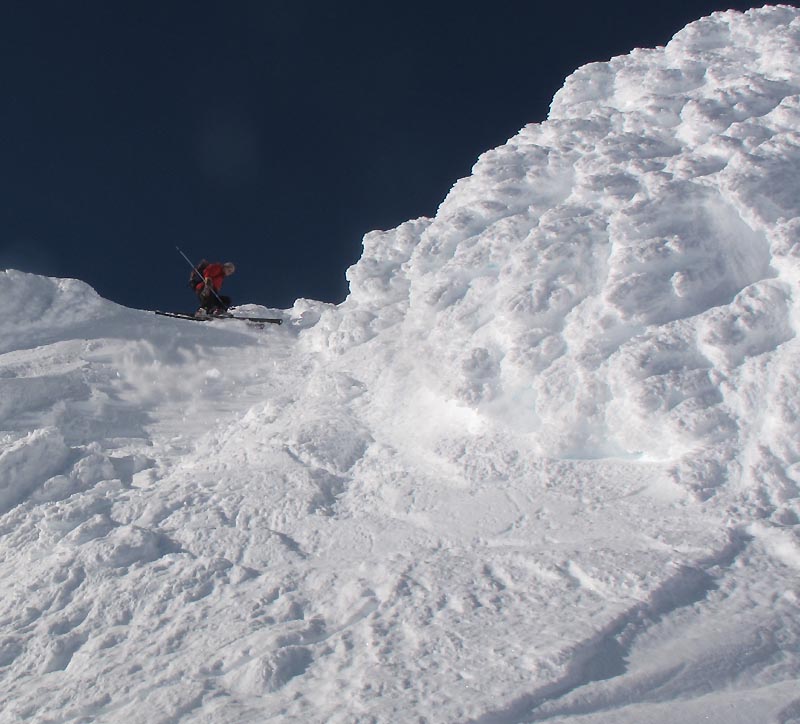 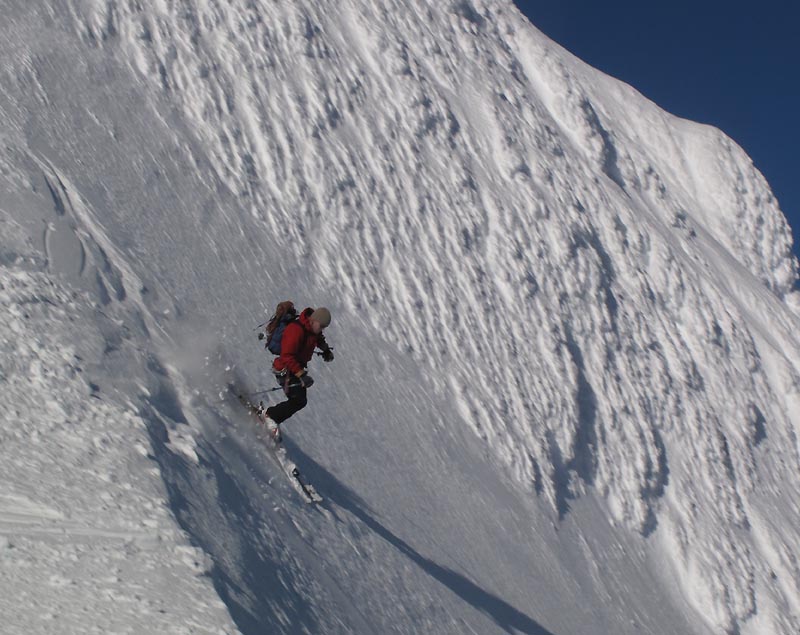 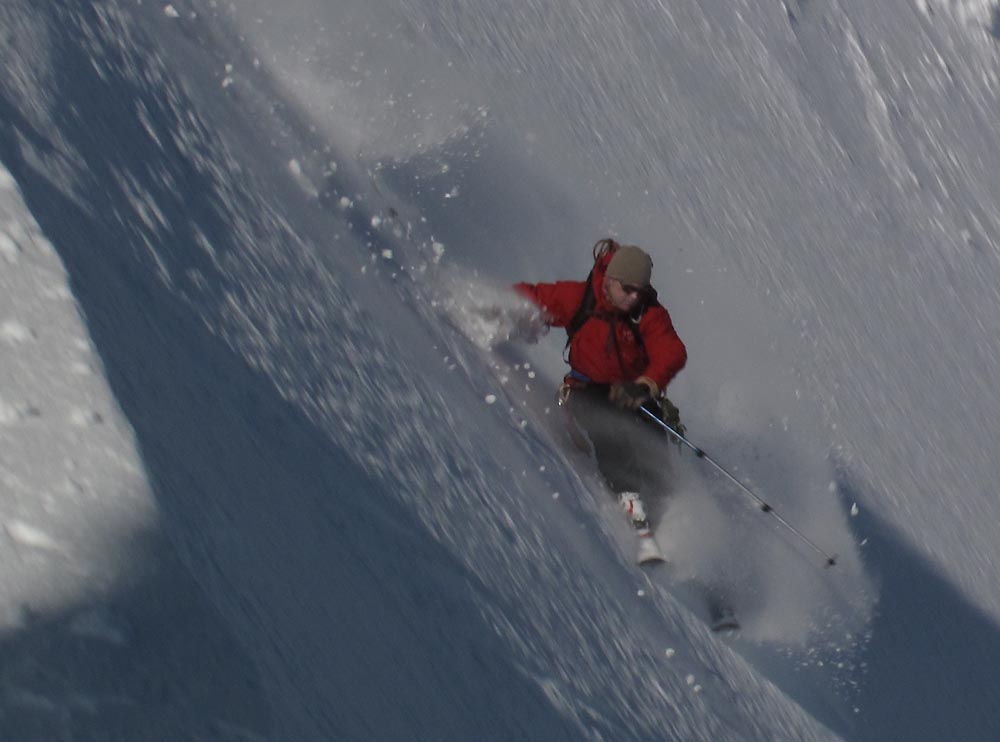 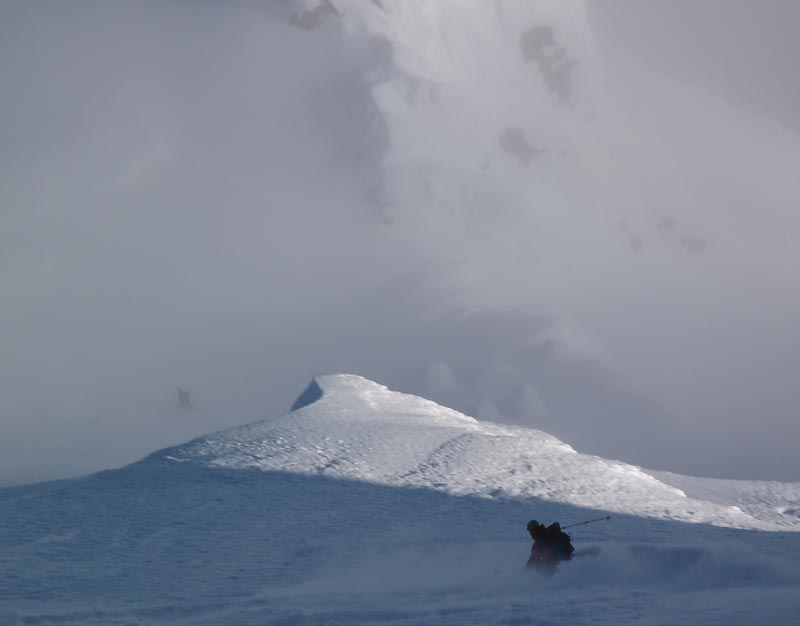 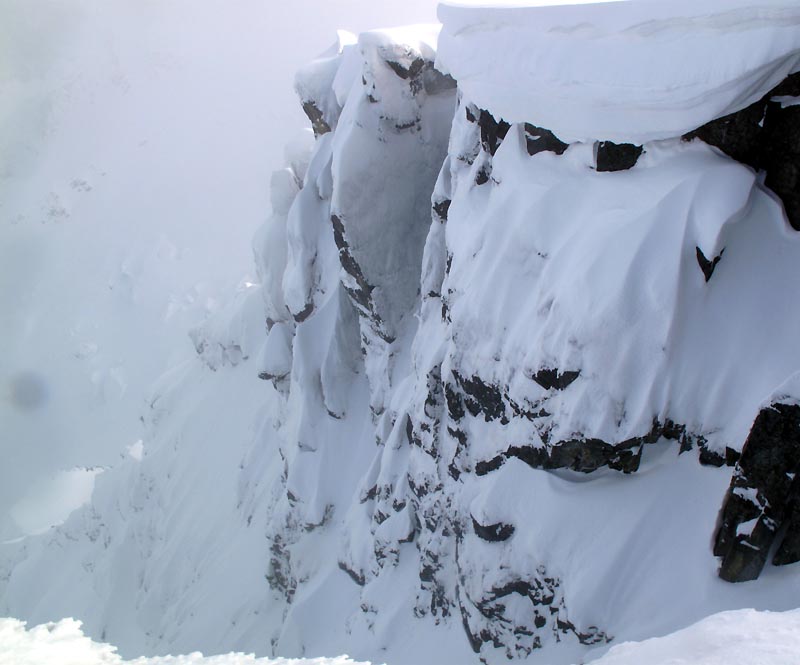 Twin One Couloir has good protection 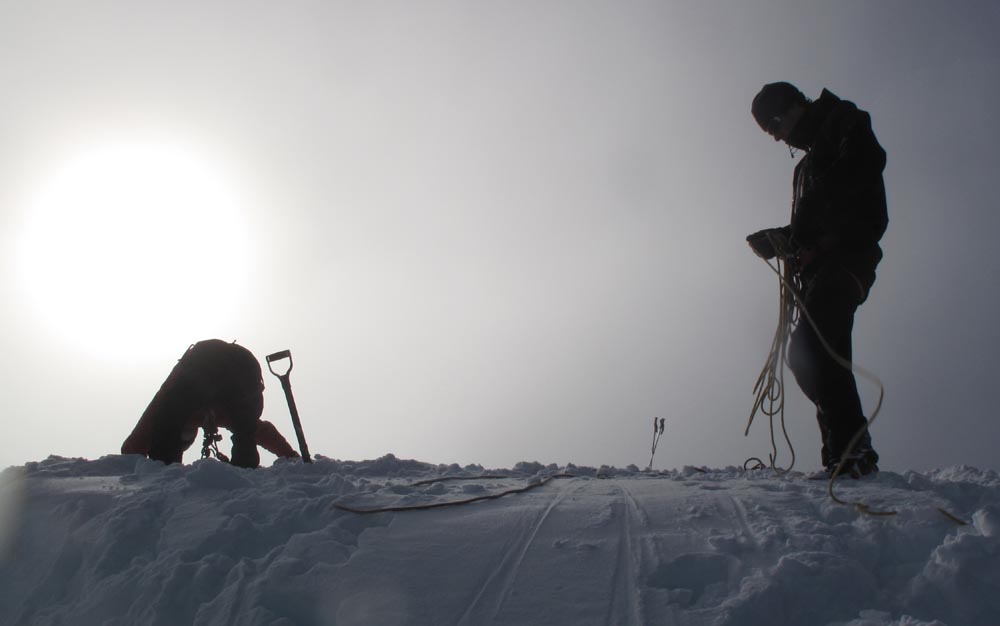 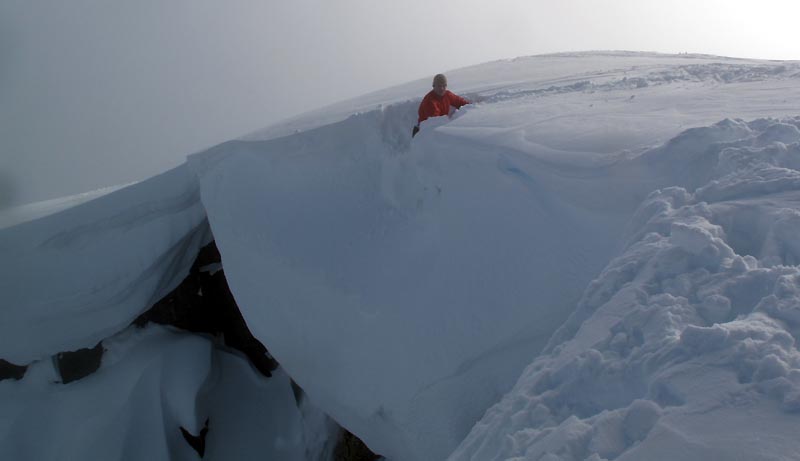 but first …. Paul must play with big blocks of snow 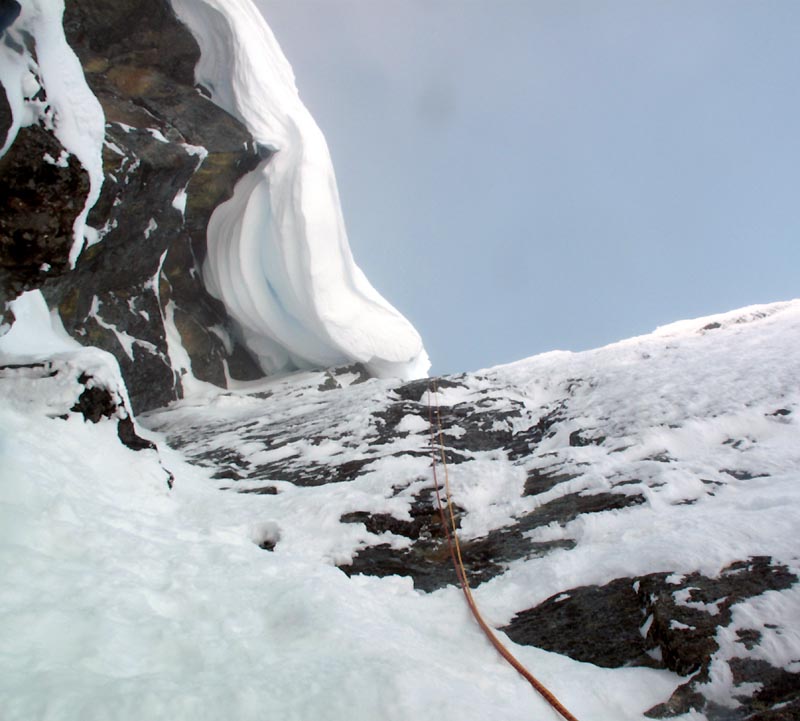 View from the first rap station 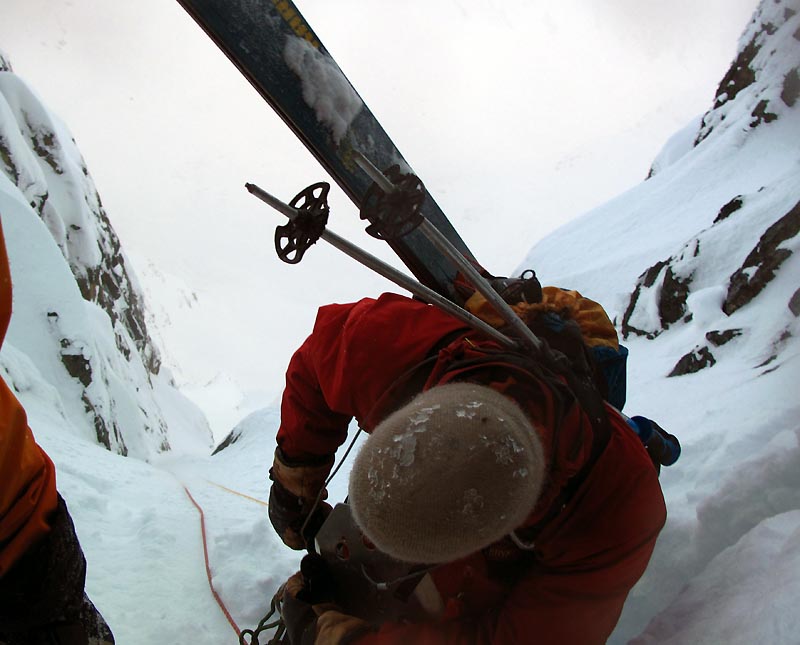 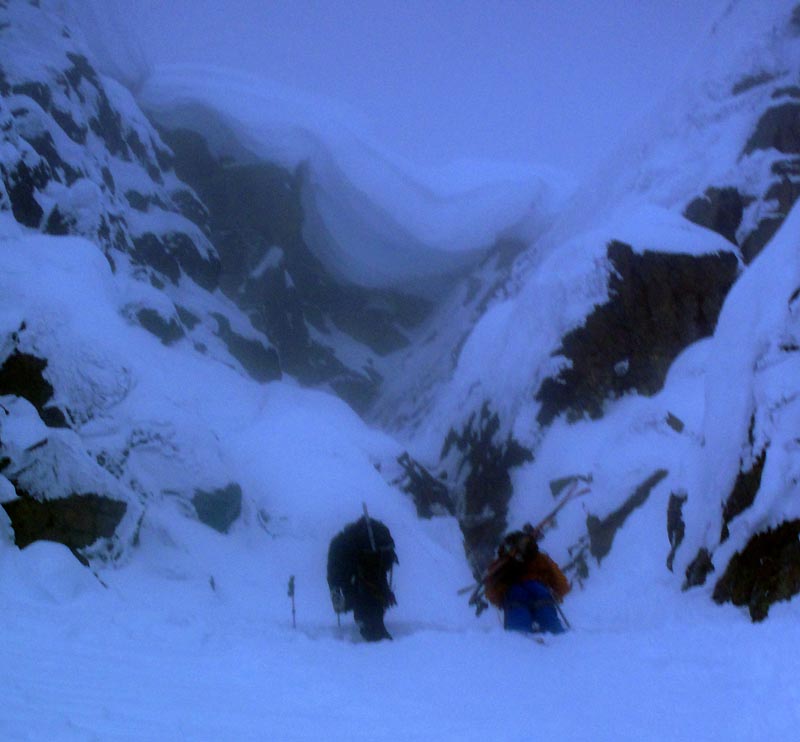 View looking down from the first rap station then view from the platform we dug out to put on skis. Still exposed to the big-ass cornice 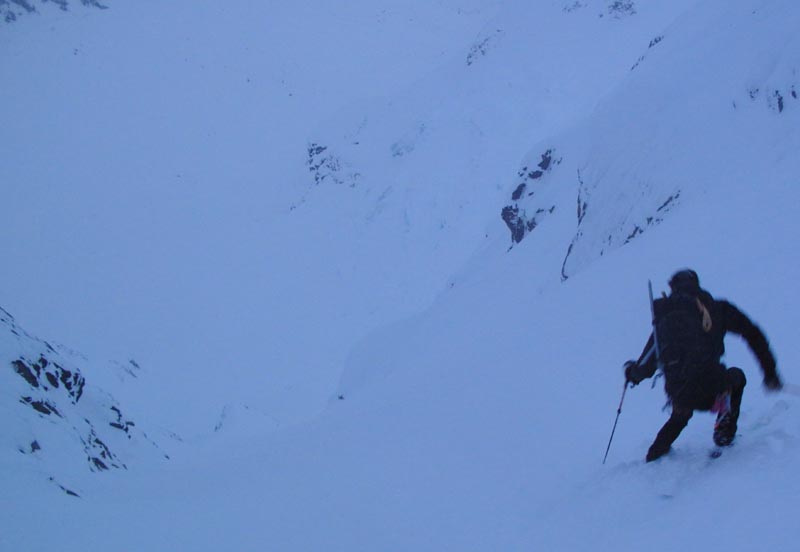 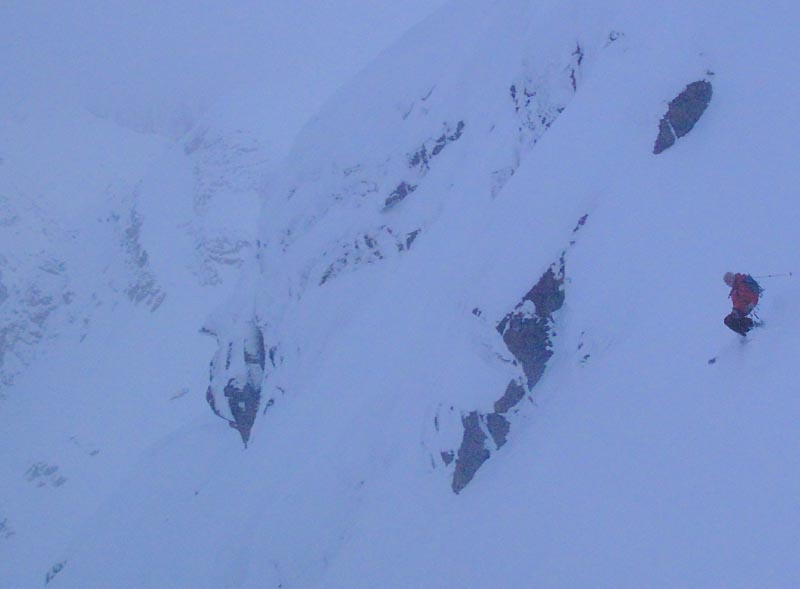 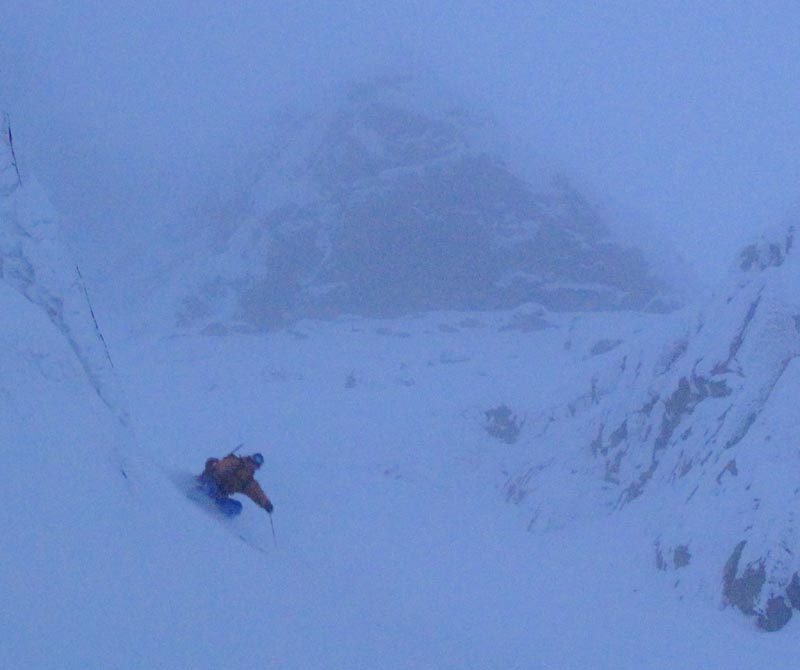 Light leaving us as we depart the Twin One Couloir 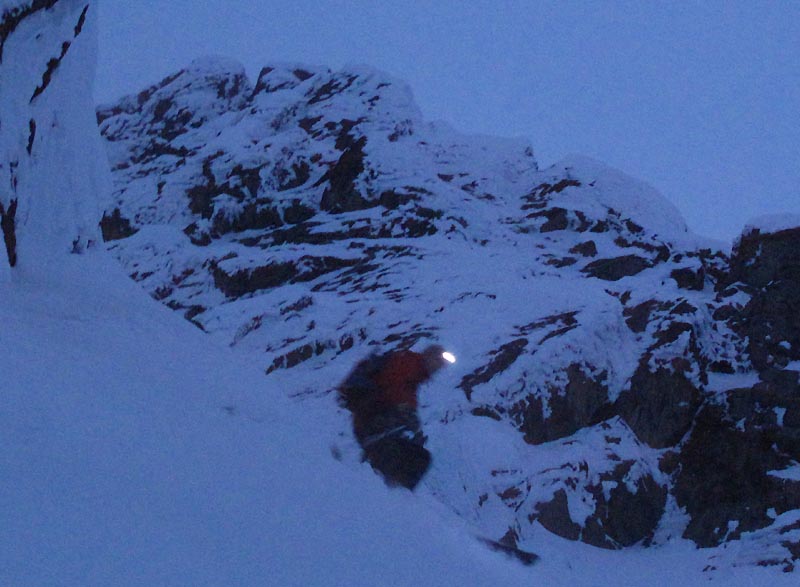 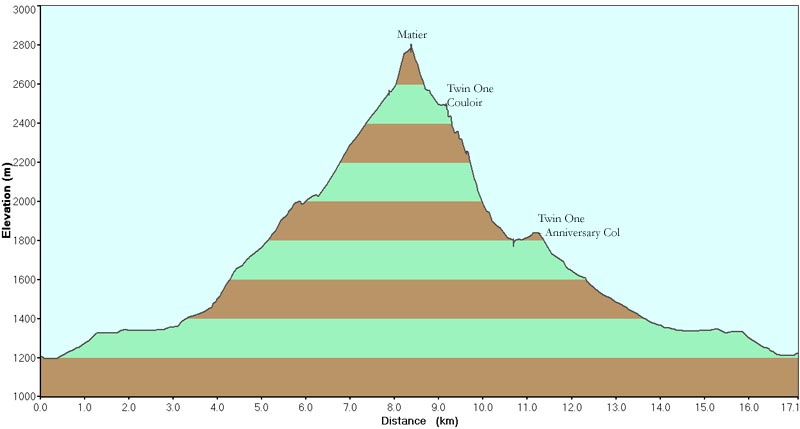 This entry was posted in 2010, ski and tagged Duffey, Matier, Twin One. Bookmark the permalink.