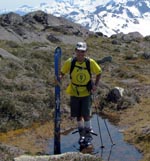 What a season we’ve had this year. Terrible for alpine rides or for hikers pining for snow-free treks but good for skiers reluctant to say goodbye to a season. Sean, Mike and I decided to check out an area that we usually don’t touch in winter as it’s overrun with sleds. Metal Dome is a 2010m peak in the Callaghan Creek drainage area. A snow cat and sledding company run commercial trips in the area. Private sledders piggyback on the easy commercial sled access.

Oh glorious day! We managed to drive up to 1175m on the Brandywine FSR

Sean at the garbage – littered sled hut. This kind of filth doesn’t belong in the alpine.

Sledders have quit throttle-twisting for the year. The Brandywine access road was snow free. I could probably have driven to the garbage-strewn hut at approx 1250m but elected to park just short of 1200m and hike to the end of the road. With freezing levels of 4500m overnight I figured that there wasn’t a prayer of a corn cycle happening so there wasn’t really that much of sense of urgency. We didn’t leave the car till 9.30am. We were at the end of the road at about 1300m at about 10.15am. After a short bushwhack through a small patch of slide alder we were (to my amazement) at skinnable snow at 1470m at about 11am. 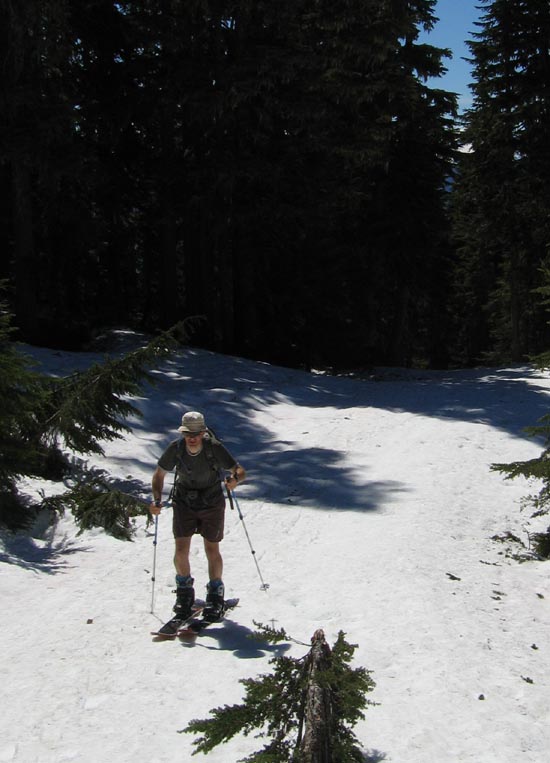 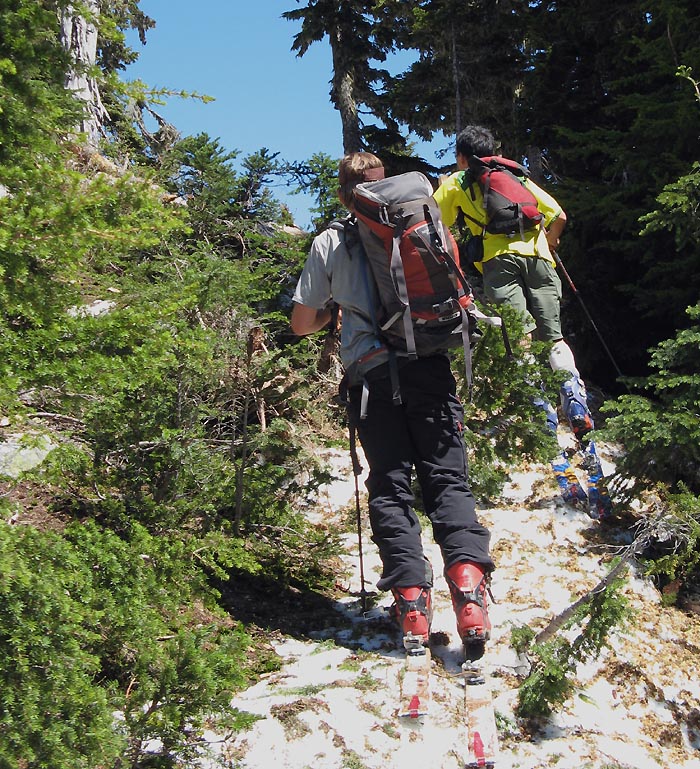 Some of the sled track had melted out 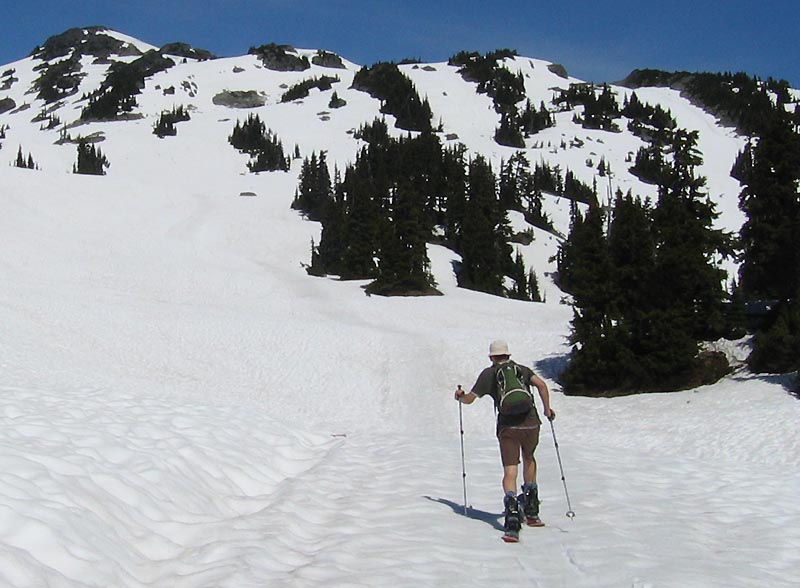 Tons of coverage even on south – facing slope at 1600m

Sean and Mike on Metal Dome

Progress was incredibly fast as we picked up the snow-cat track. In about 2 hours we were up from 1470m to the peak of Metal Dome at 2010m. The biggest hazard was sunstroke and heat exhaustion. Temps in the valley hit 33 degrees and it was almost 28 degrees at mountain top. We walked over to the N face to look down slope but halted when we saw big stress cracks in the snow. 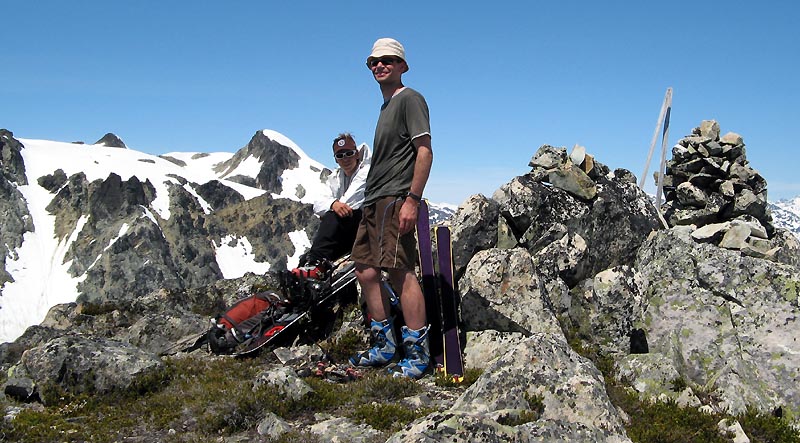 Sean and Mike on Metal Dome 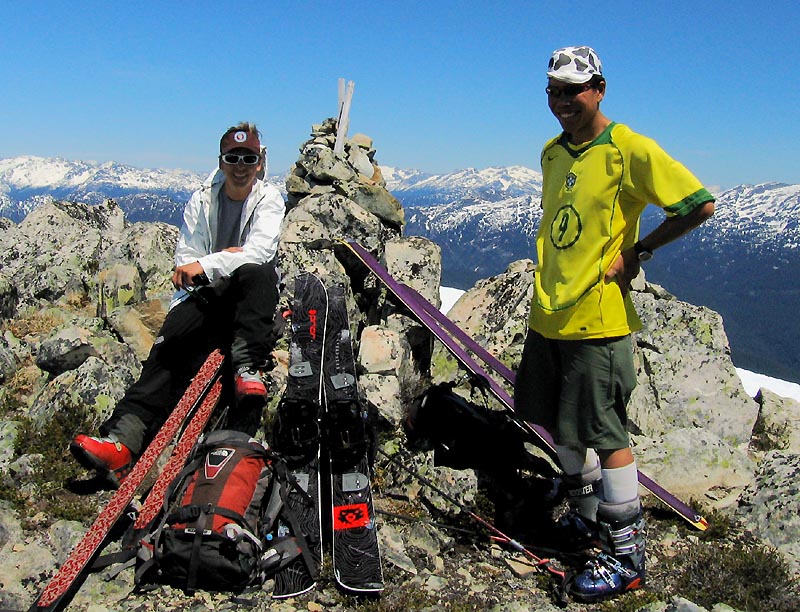 Mike and Lee on Metal Dome

Mike and I were very curious about the condition of the N slope and bum-slid down a slope to a nice safe rock outcrop to take a look at the N glacier and to check out the source of the stress cracks. Bum sliding is a new experience for me and its a lot of fun – I can’t believe that I’ve missed out on all that bum-sliding while I’ve been doing all that ridiculous skiing. Back to the topic – the stress cracks were from a huuuuuuuugggggeee cornice drop off the N slopes. A size 3+ slide (possibly cornice triggered) had deposited a load of debris all over the slopes. Consoling ourselves with the knowledge that it was so warm that skiing would likely be slushy no matter what the aspect, Mike and I climbed back up to the peak for a nap in the sun. 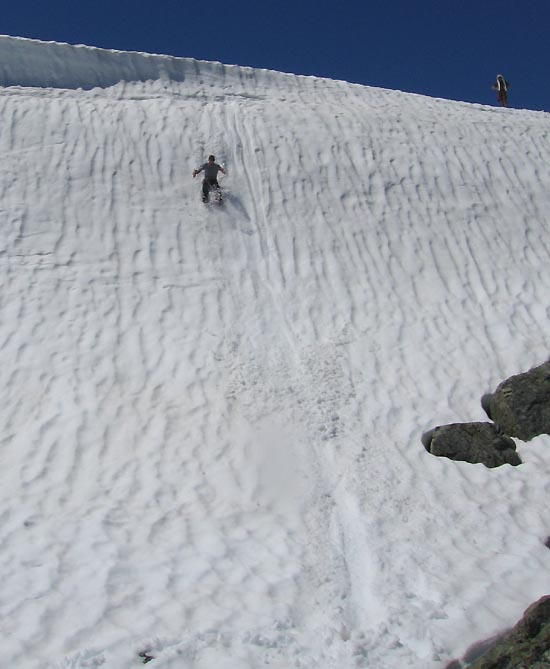 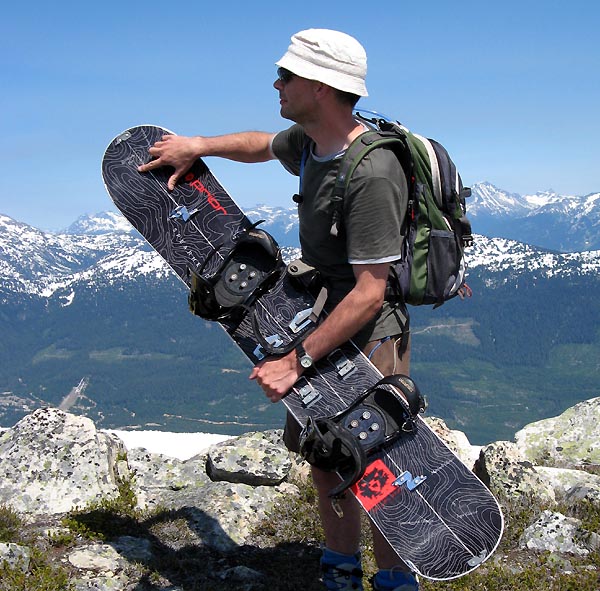 Sean with his Prior Spearhead – the map is accurate 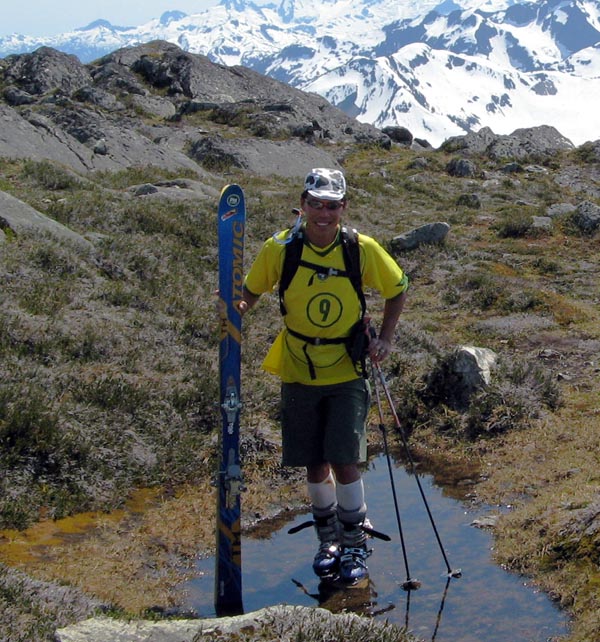 Lee playing in the alpine tarns 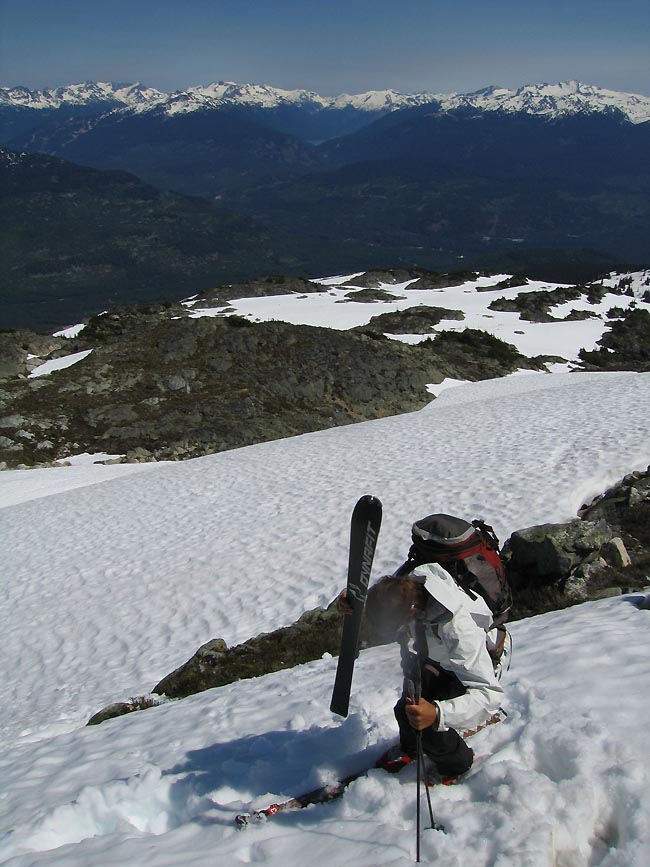 Mike preparing for slush turns on the S face 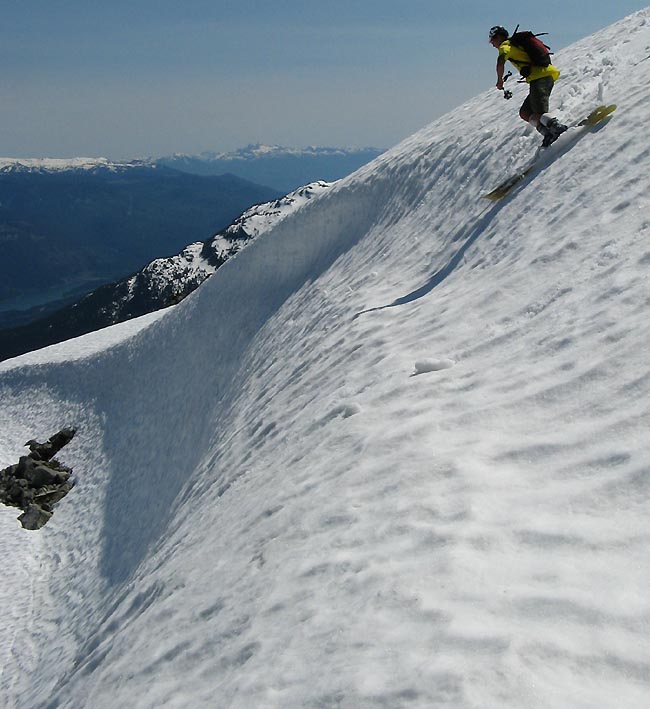 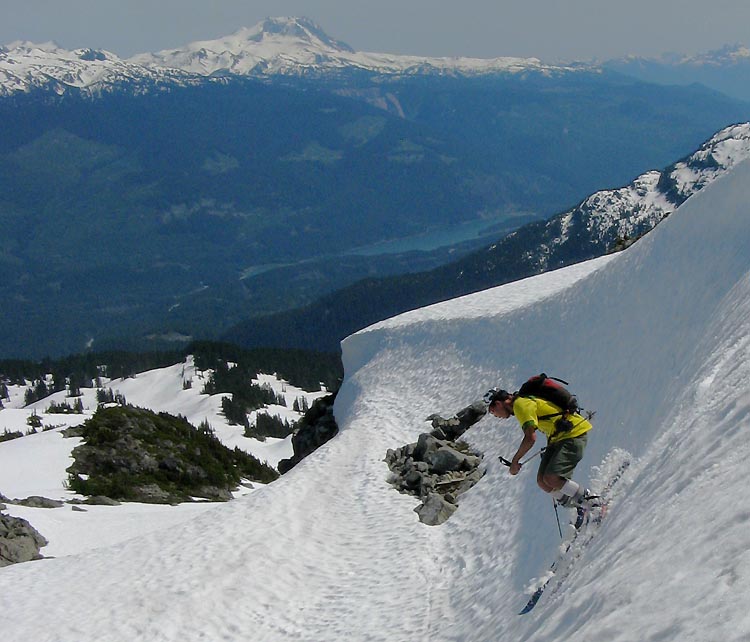 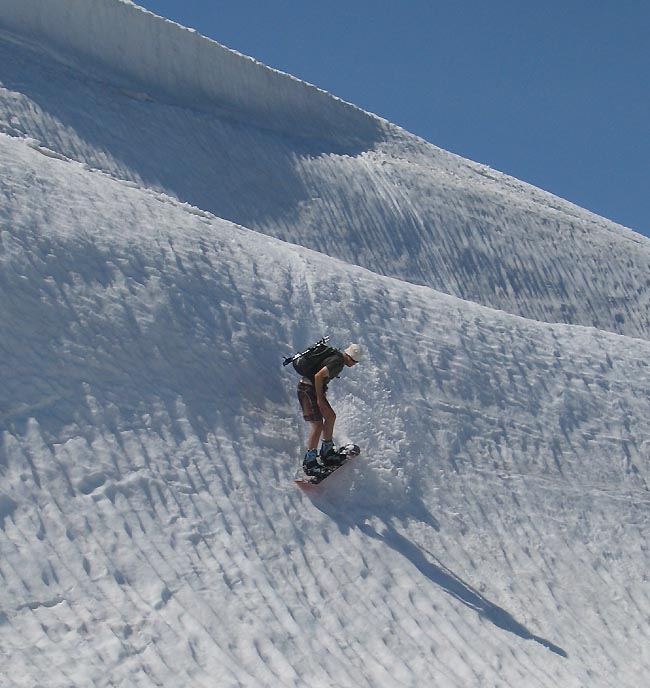 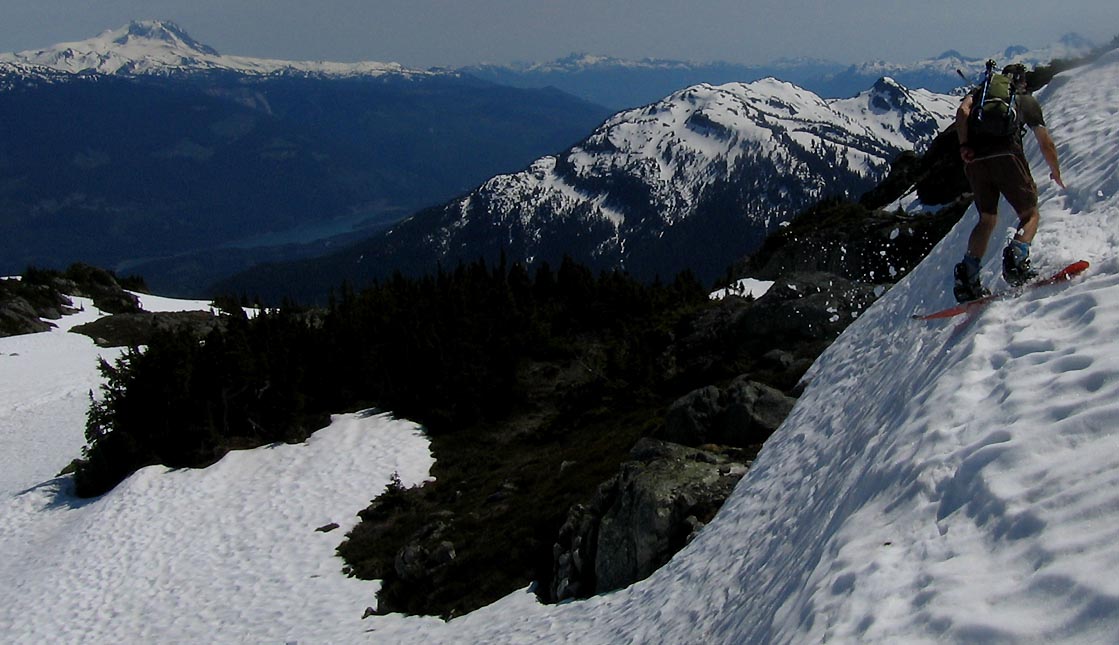 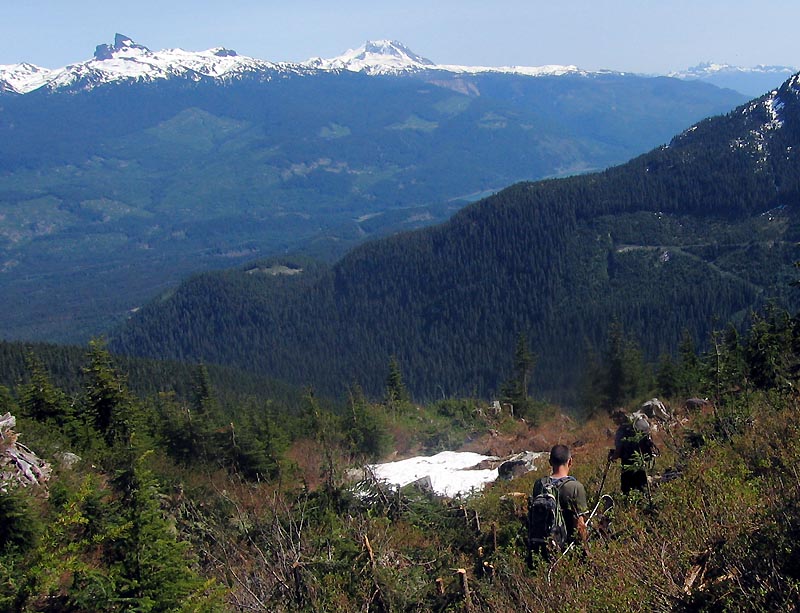 Back to the barn 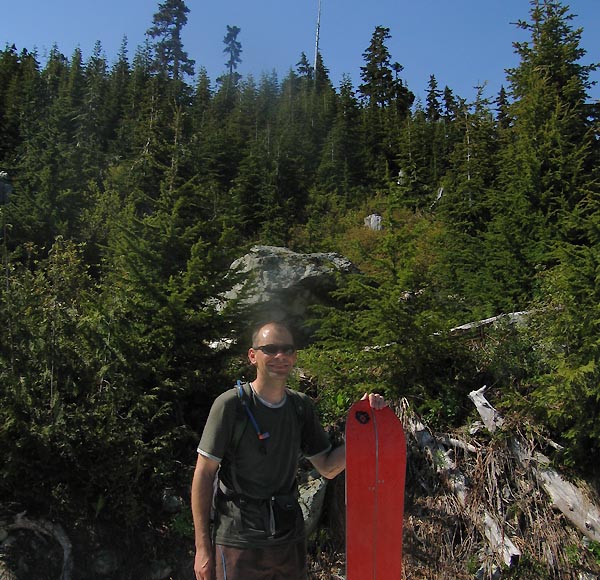 Sean looking back from whence we came

Getting back to the vehicle was fast. Leaving the peak at 2.30pm we were back at the main road in 45 minutes and by 5pm Sean and I were back in Whistler. Just in time to get a couple of rides in at the bike park 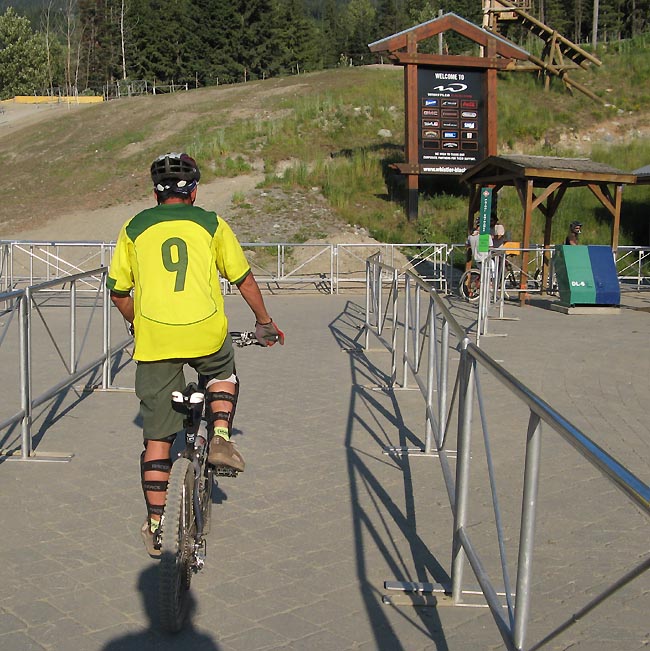 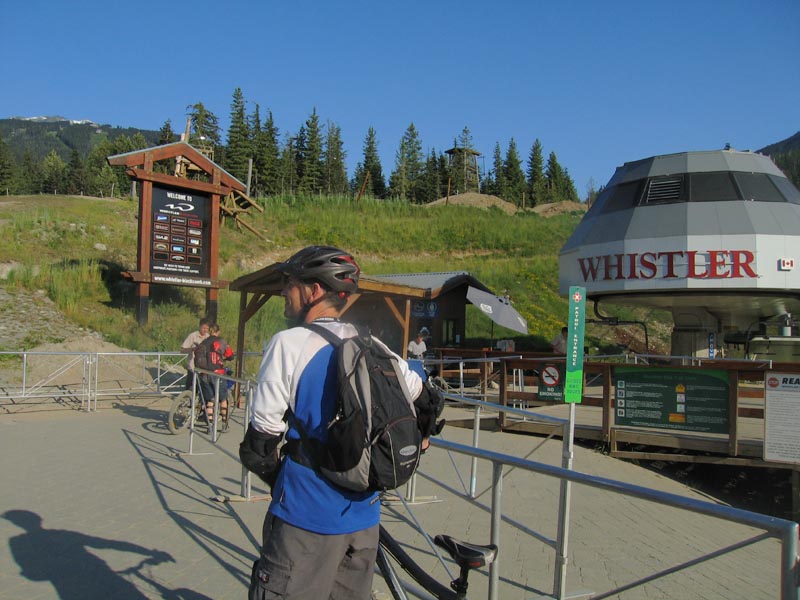 Then off for a few runs in the bikepark

This entry was posted in 2008, ski and tagged metal dome. Bookmark the permalink.