I just had to test new tele setup – BD Havocs = any excuse to skip out of vancouver and head to the slopes after a weekend spent helping out a mountainbike events. Not many pictures; it was supposed to be a consolidation day for the snowpacks after quite the weekend storm event so I stuck to doing laps on the new Whistler inbounds pseudo – backcountry experience.

Here’s some tracks of mine on Flute. The BD havocs perform quite well. Since I was by myself I went for speed and could do 25 minute laps from the cat-track to top and then back down at about a 1600 ft/hour pace. I ended up on my ass a few times trying the euro transistion trick of putting on skins without taking off skis so gave that up as a bad job after a while. Unfortunately for heart rate fans I didn’t bring the monitor It was enormously satisfying to put in tracks before the bootpackers could get one lap in. 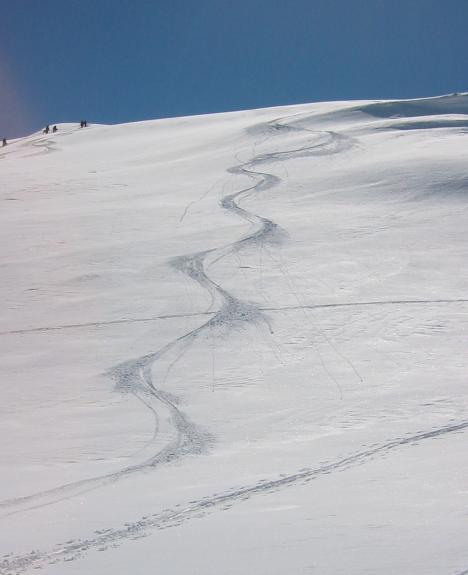 Spent some time watching people hucking off the cornices on Flute bowl and looking at their buddies taking pictures from the bottom and idly wondering whether i had an obligation to hang around should the cornice break off and bury everyone then went to flute shoulder and dug a pit. Also took this picture of Fissile and Whirlwind for next escapade. Looks nice ! 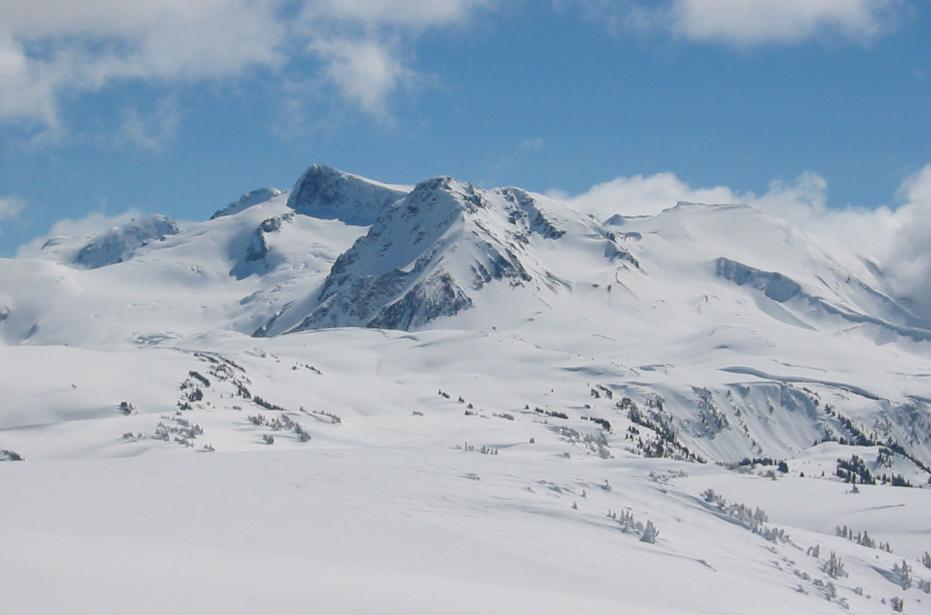 With these heartening results I did a couple of laps of Flute shoulder and ended the day on that nice note.

Solar is a factor as it got really warm. The top 25 cms sluffs off if you’re traversing a steep hill. It likely wont kill you but it can give a nice ride and exposes a nice slippery bed surface. Ski crampons a good idea at this time

04.11.05 – We started from Alexander Falls at 2700 ft and ending at Callaghan Lake at 4000 ft. Three in the party all on AT gear. Snow was patchy at 2700 ft to 60 cms of unconsolidated at 4000ft. The snow is an unconsolidated schmoo that seems to be great for a base. I didn’t bother going to the lake or even trying to ski the slopes we picked out. The slope angle was too low for decent touring as the snow was heavy and slow. Plus my wifes and TS’s feet were killing them. We elected to do some tranceiver search practise and ski out.

Snowed approximately 8 – 10cms on us during the 6 hours we were out. The ski out was hard – snow continually sticking to ski bases. Don’t bother with Callaghan Lake until there is more snow.

The picture below is just below the parking lot at 2700 ft. Snow accumulation was about 2-3 cms; another 5 cms fell at this elevation. You can drive another 1km with snow tires and probably another 2kms with chains 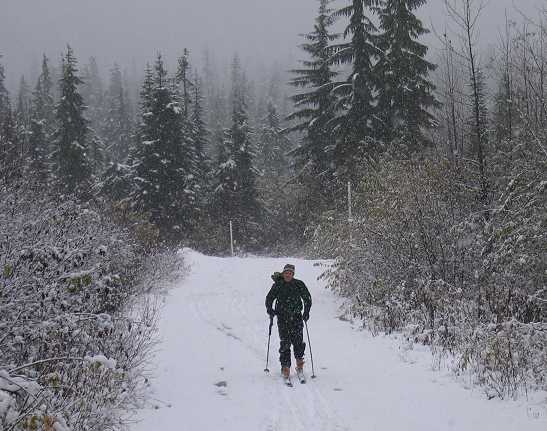 This picture is at the Callaghan Lake sign approximately 1.5kms from the lake itself. Snow depth is approximately 50 – 60 cms at 3900 ft. 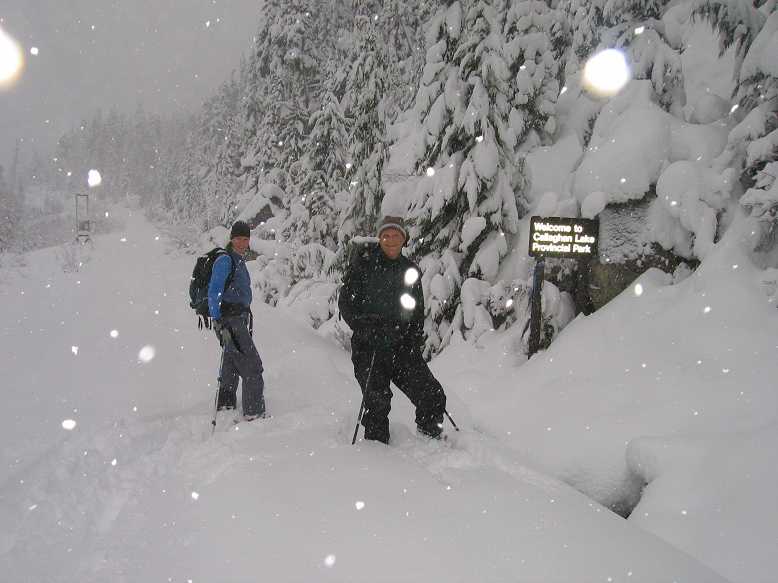 Tranceiver practise at a turnout just before the junction to either go north to the lake or west to the commercial XC ski operation. Snow depth is approximately 60 cms. 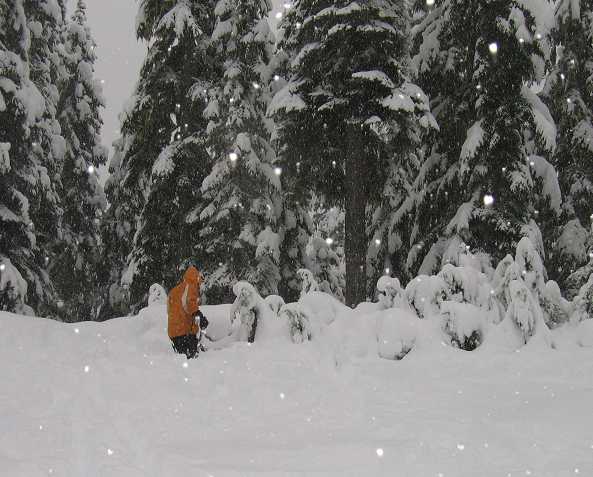 05.11.05 – Opening Day – Skied Blackcomb. Was in the lineup at 8am and still was on chair 100+. Another person who was in the lineup at 7.30am got chair 60. Did two fast runs down Solar Coaster in knee to waist-deep snow then the crowds got insane. My legs were toast so quit at 1pm or so.

06.11.05 – Skied Blackcomb inbounds again. Not much to report. Ran into some people who said that the glacier was still crevassed but that it was skiable. RidgeRunner is also accessible by skinning up from JC to Glacier and over to Crystal Chair and apparently is superb.

The picture shows the lineup on Day 2. There were 5,000 skier visits approx on Day 1. Day 2 was much less crowded. 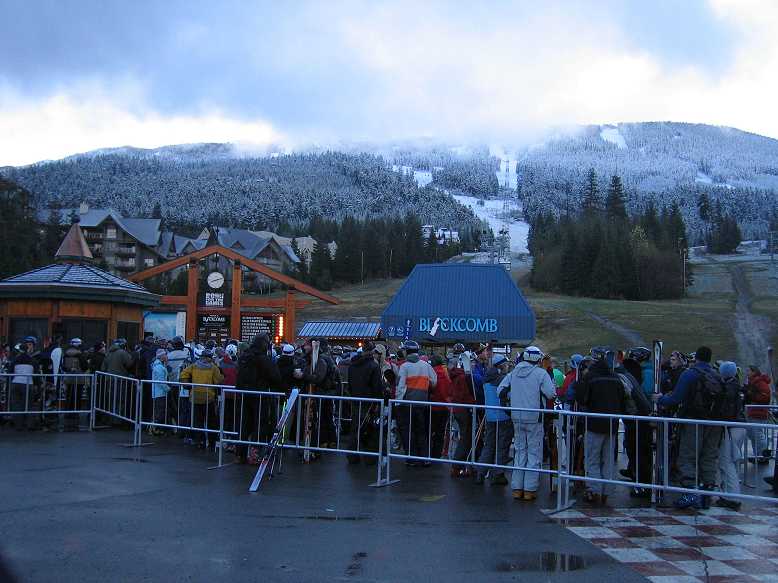 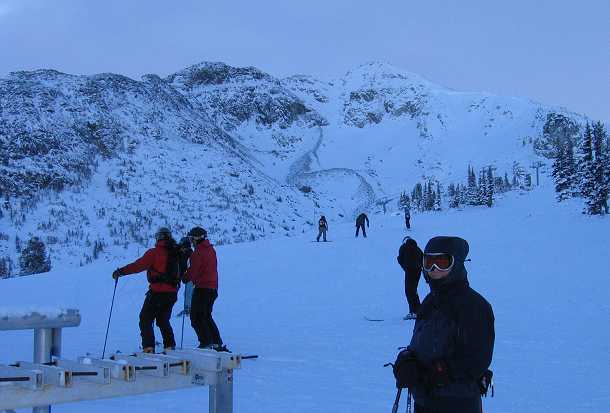 08.11.05 – Not too much to say about today. Half hour lineups at the border. Long lineups to get to the parking lots and for tickets. First chair at 9am but weren’t on the hill till 10.30am. It still rocked! This picture shows the ticket lineup at 10am from the patrol shack then going around the corner to the only 2 ticket booths open. Staff said they weren’t prepared for the crowds.. We were close to the front thank god 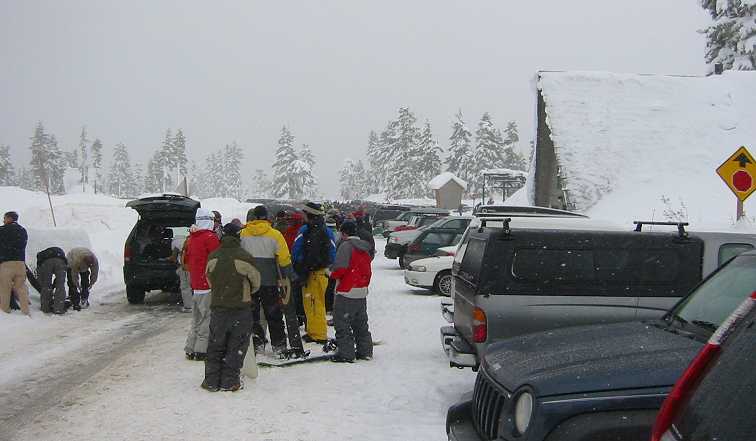 Under Chair 6 – it was already tracked but people were still sending it. 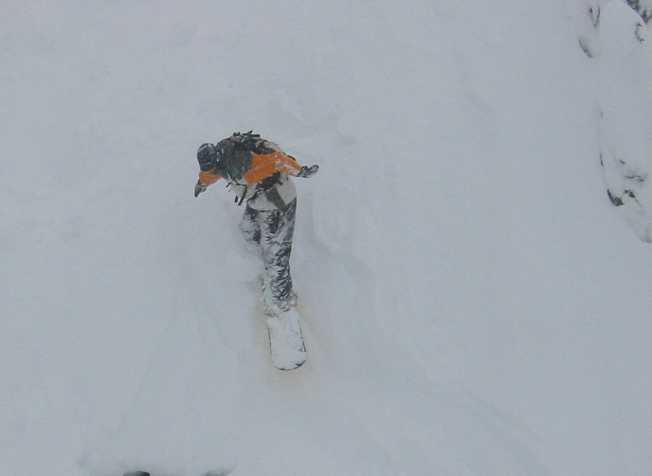 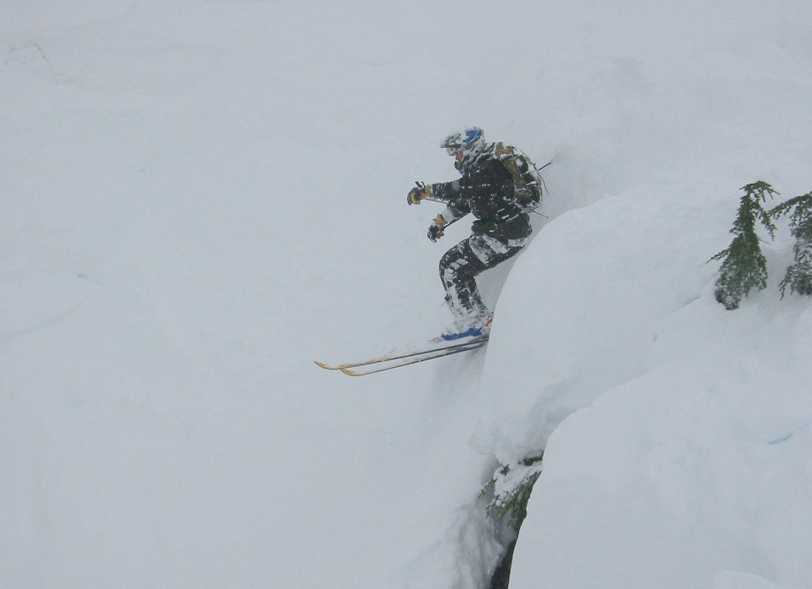 The first run wasn’t all that bad for early November 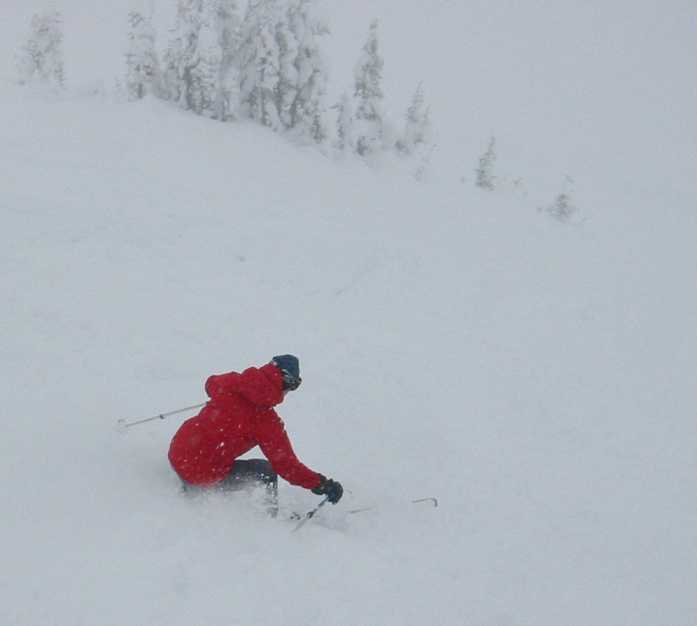 After lunch we hooked up with some friends from Vancouver Island who’d also made the pilgrimage. By then the main runs were getting compacted – this should make a nice base under Chair 5 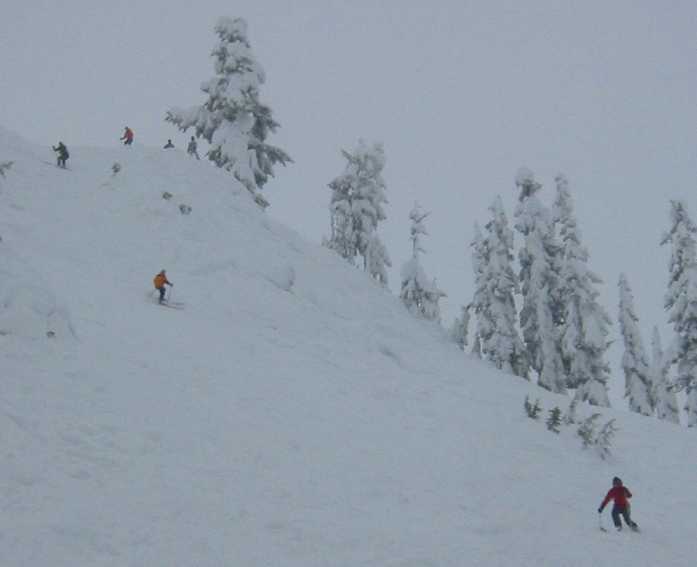 Even at the end of the day, a run on Pan Face dropping into a chute still had nipple deep pow. Visibility was so poor I had to poke an overhanging slab loose downslope just to figure out what the downslope looked like. 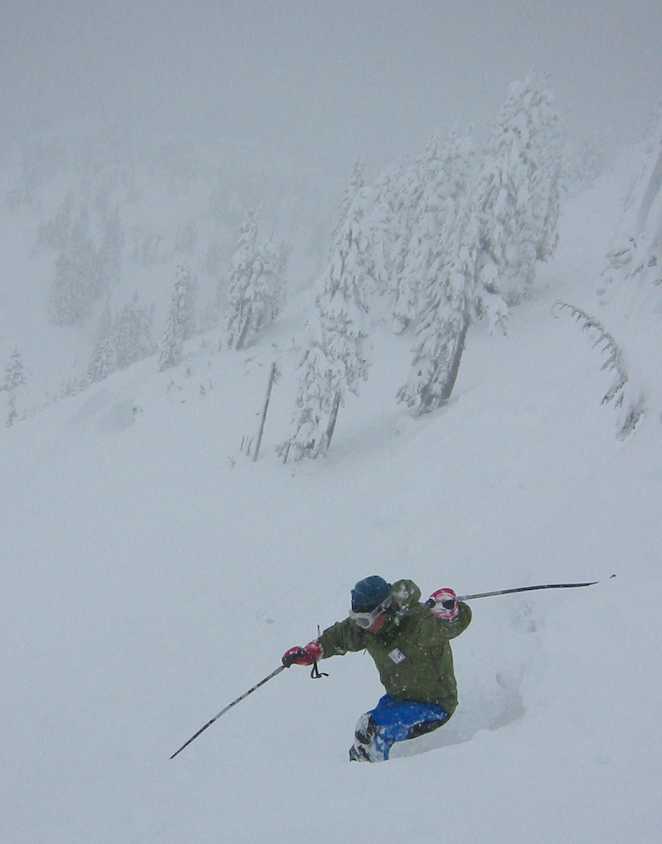 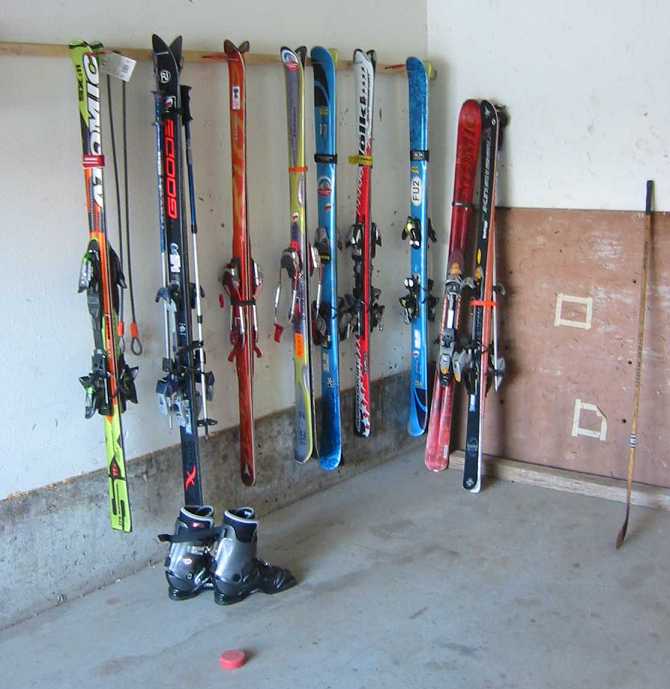 The day after opening day on Whistler it snowed for the first time in 2 weeks. I was expecting dust on crust but the wonders of windloading meant that the 5cms reported new snow skied more like 10cms.

Some young rippers – Steph and Morgan going down Harvey’s to the Harmony ski-out. Wish I’d started skiing that young. 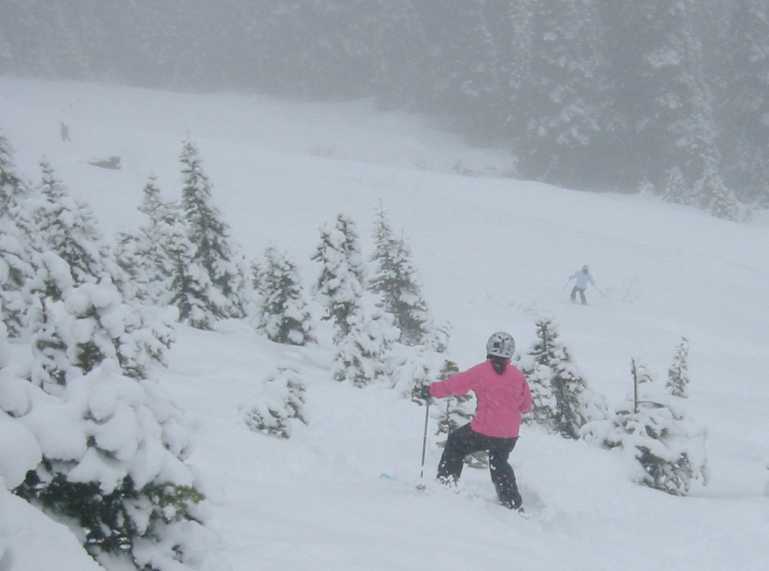 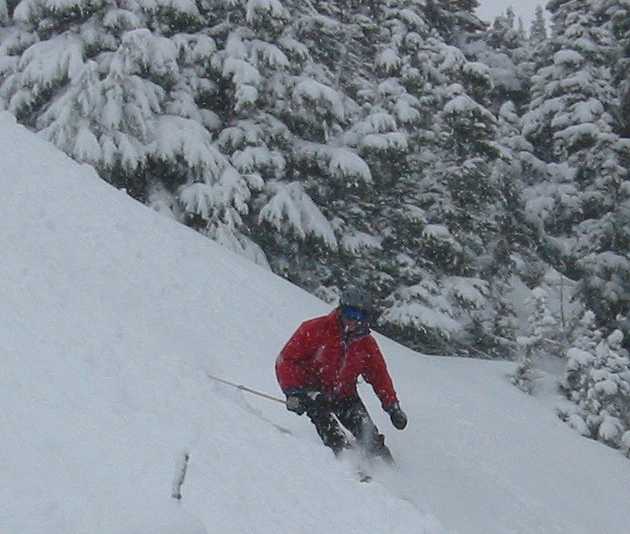 Here are some pictures that turned out well while Sharon and I were taking an avalanche course. We had some field work up Duffy Lake. Snow depth was not too impressive at 60cms but at least the route was skiable from the road. This view looks west of Cayoosh mountain into the NE face of Cayoosh and skiable bowls draining into North Joffre Creek. Cayoosh is on picture right and is behind the spurs of its south-west ridge which dominates the picture.

This shows a view of the Cerise Creek drainage on picture left; then Chief Pascall in the middle of the picture in the foreground. On picture right is Slalok Mountain with the broken blue ice of the Stonecrop Glacier in front.

This view looks east from Cayoosh towards Marriot Basin 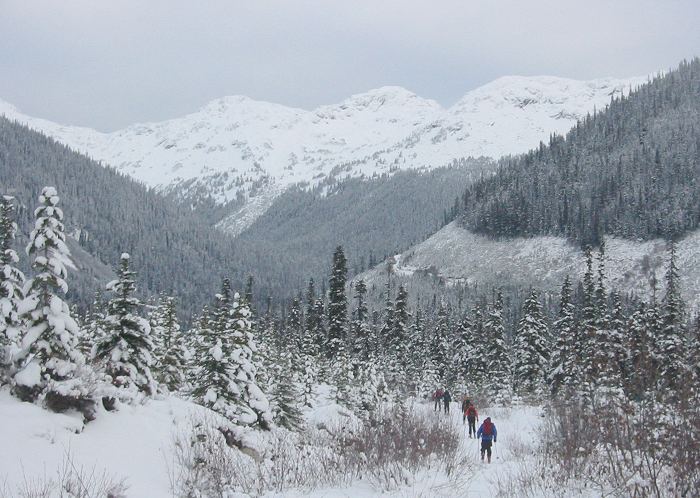 North east of Cayoosh is this avalanche path; doesn’t look like it crosses the skin track. The slopes above the path look skiable -especially the NW and W aspects.

They regularly release big when the sun starts getting some power as early as February. Usually a series of laminated sun crusts throughout that bowl with storm snow just waiting for folks to jump in. The track ends just by a little cabin in the meadows and has been a popular ski run for years. Just be certain about the avy danger. 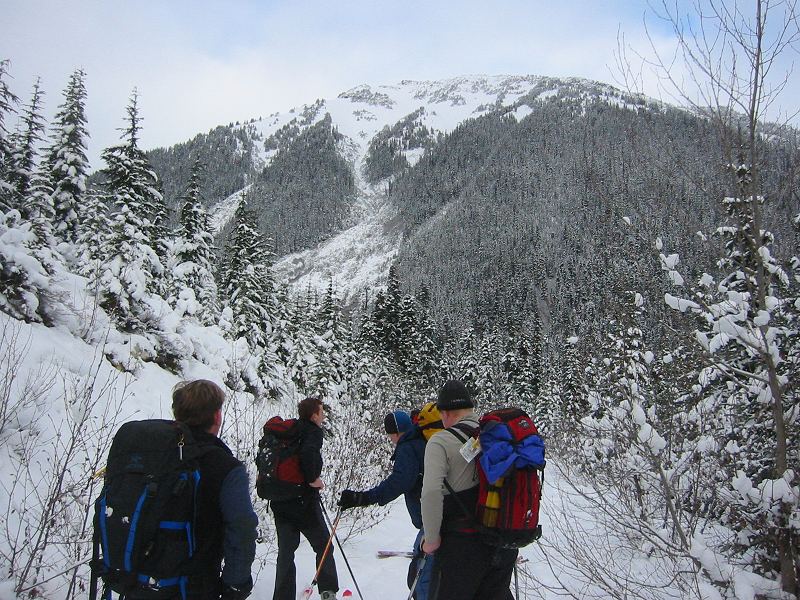 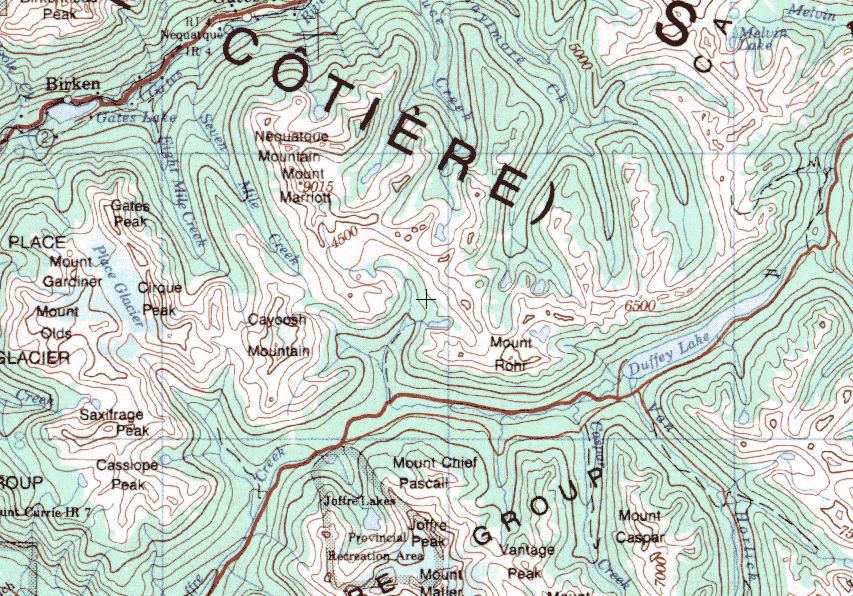 Here’s a closer look at Cayoosh viewed from the east.. The actual peak is between the two dominant features – on picture left – the SW ridge and the big sub-peak on picture right. 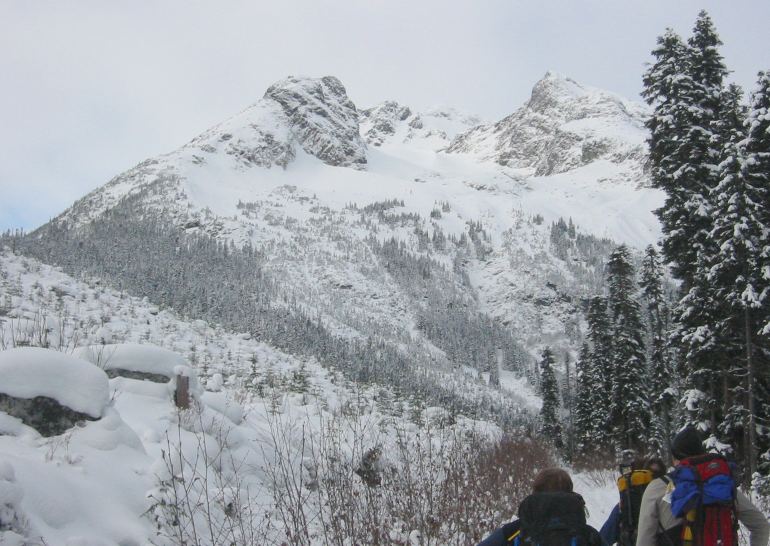 After trying, and failing, to find instabilities on our test slope Chris gets to test our assessment of stability. All is well and no slides – or rocks – are encountered. 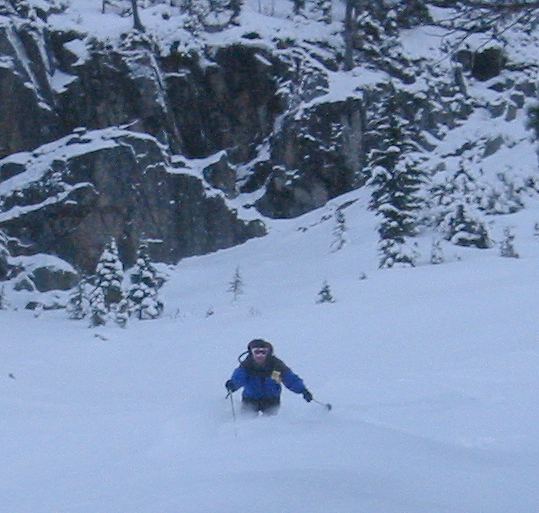 We start heading out with our Instructor Bruce in the Lead. 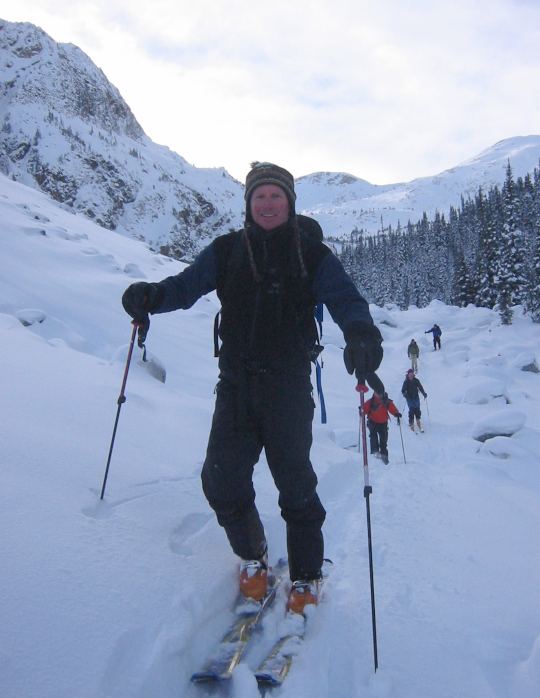 It would have been nice to spend more time here checking out the area. OOOO the potential! 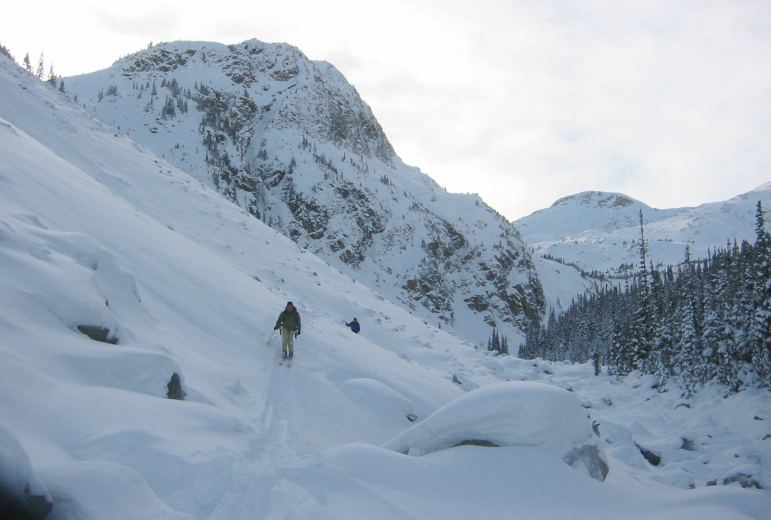 This whole area needs snow. The ski-out through a boulder-strewn mine-field is not enjoyable. 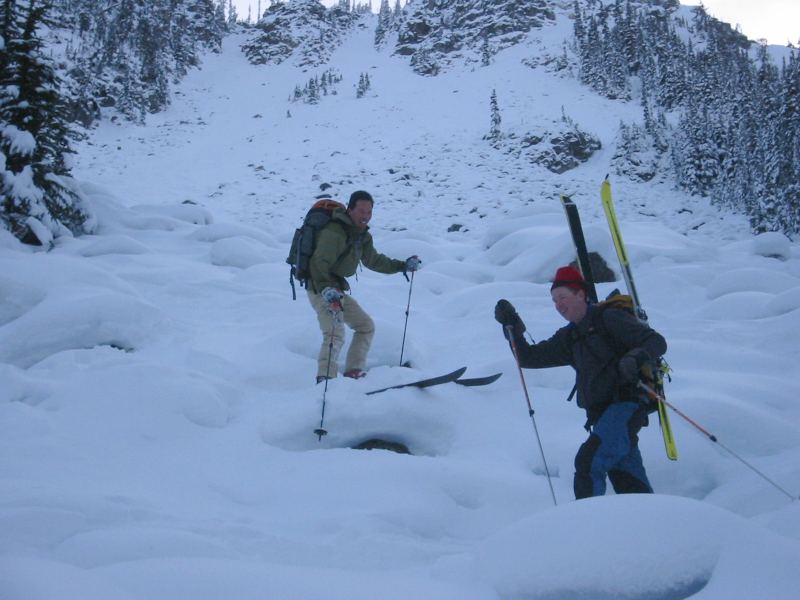 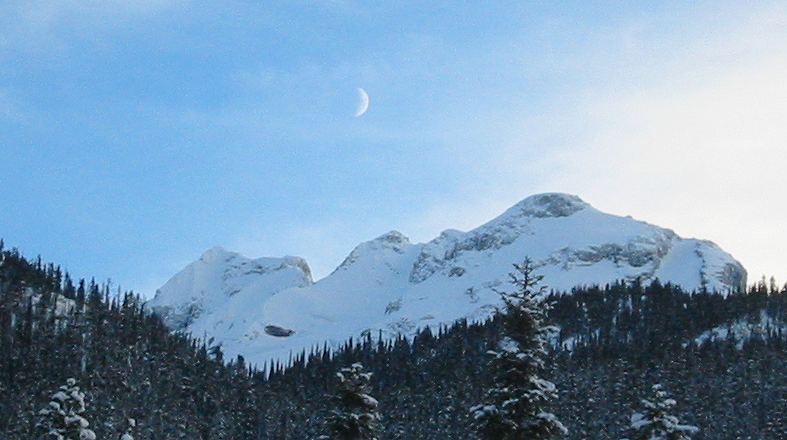 We spent some class time on Oboe. 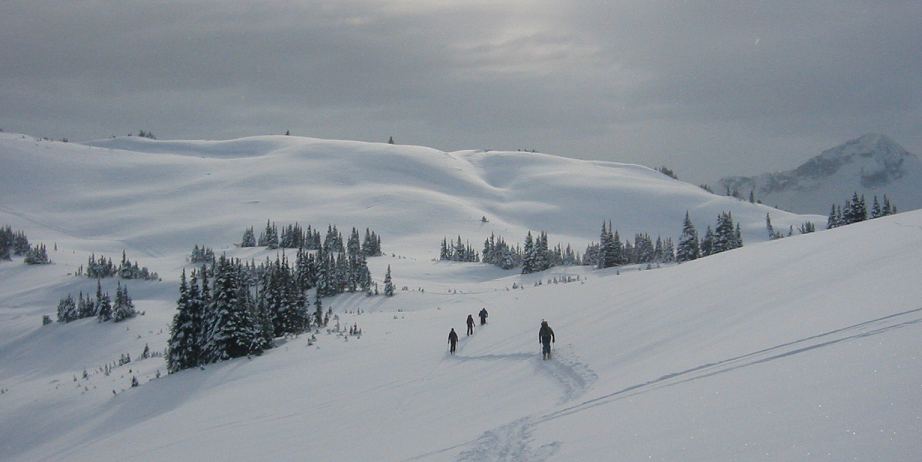 This entry was posted in 2005, ski and tagged baker, blackcomb, callaghan, quiver, whistler. Bookmark the permalink.