After hearing about the new Varsity Outdoors Club on Mt Brew, John, Doug and I planned a trip out there for a pleasant ramble in the woods. The trailhead is off Chance Creek about 1 hour and a bit from Vancouver. 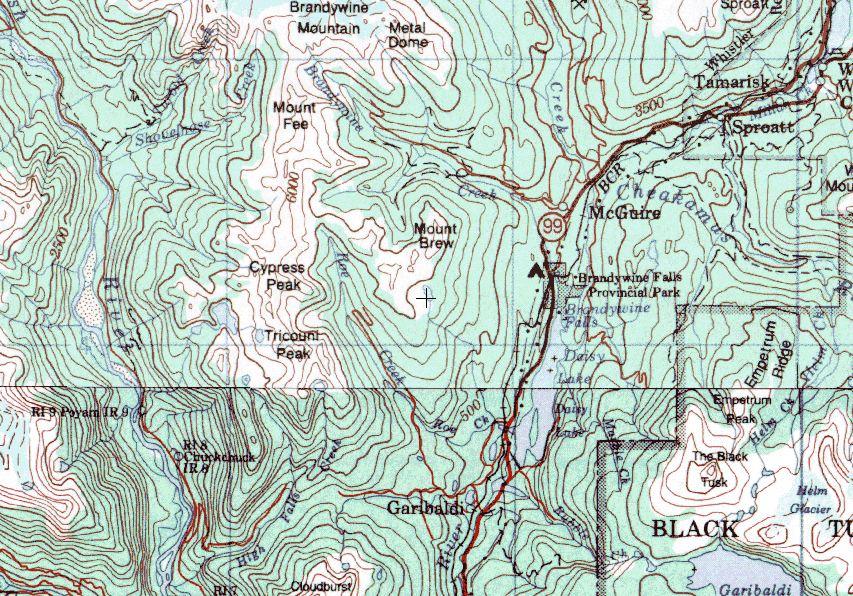 The VOC Brew Hut’s pagedescribes the resurrection of the hut and the Roe Creek and Brew Lake access routes. Our route was through Roe Creek. There used to be an access route from Brandywine but I am told its now overgrown with slide alder and not passable atp. Directions are on the VOC web page and we managed to drive right to the washout at Roe Creek FSR’s Br 200. We got a nice early start with alpenglow lighting up the SkyPilot group to our south. 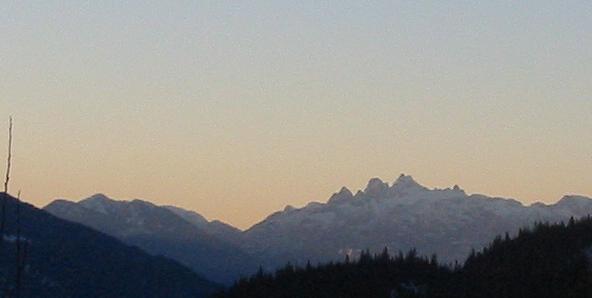 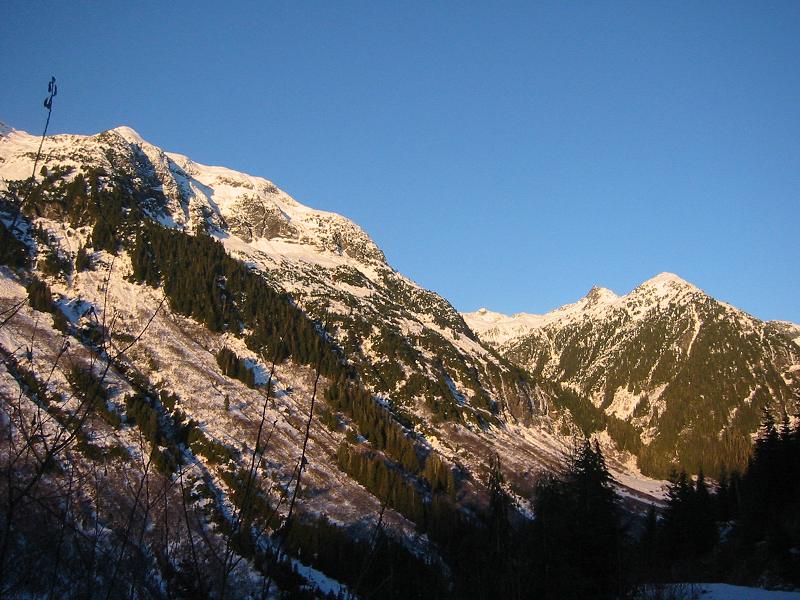 Powder Mountain Cat-skiing operates in the Tricouni – Cypress area. Can’t be too much terrain for them right now with the snowpack so low. Our trailhead is about 900m and those two peaks aren’t that high above us. Their east faces are quite sun-affected and there’s quite a few sluffs and pinpoint releases. 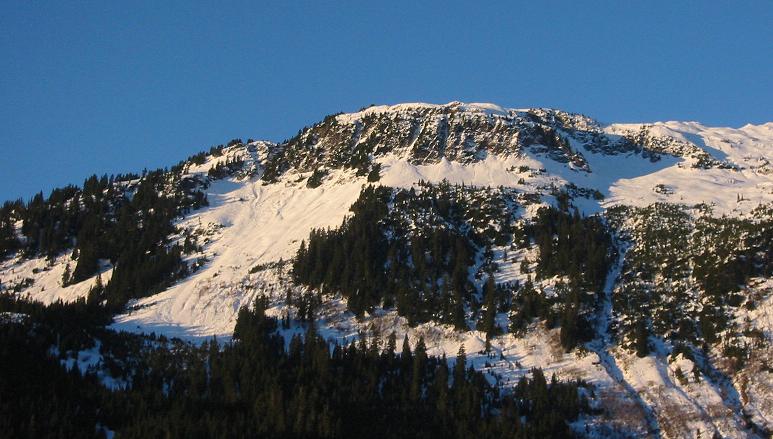 Here’s our trailhead for the walk through the old growth up to Brew Lake, the hut and Mount Brew. You can ski up the road if you are careful but snow cover is thin. 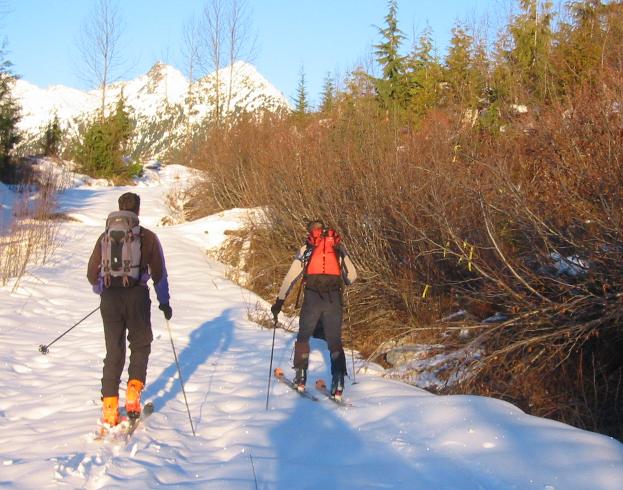 The trail is well flagged. At about 1300m after hitting some talus and thicker woods it seems easier to start hiking. Thin snow cover means that the biggest risk is breaking through a small iced up creek or puddle. 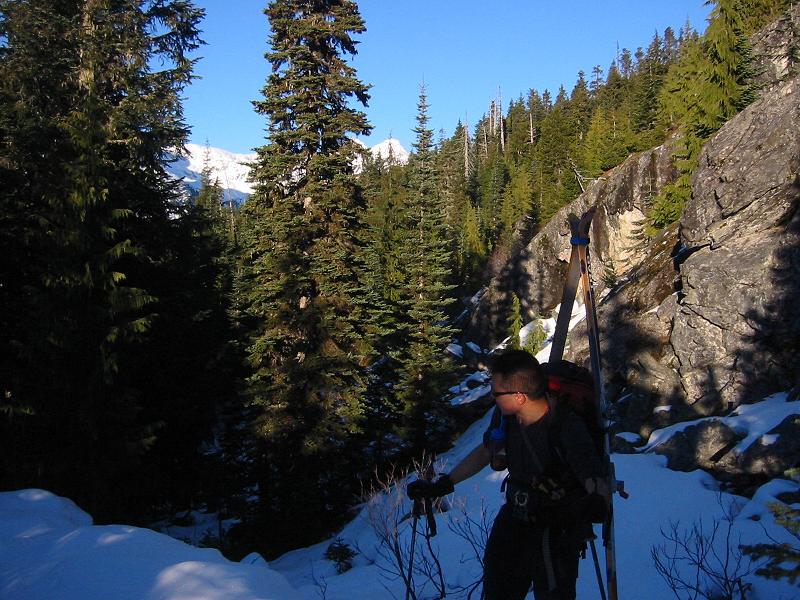 It’s actually not a bad slog by Coast mountain standards as its all old-growth sparse trees. In less then 2.5 hours we’re at Brew Lake, putting our skis back on and taking in the views.

The obvious route meanders along the west bank of the lake parallelling a ridge and heading to Mt Brew from the south.

In about 3.5 hours we’re at the Brew Hut. Much nicer and a lot stronger looking then its caved-in predecessor. Much credit to Scott Nelson and the VOC for the construction and the scenic views from both windows. 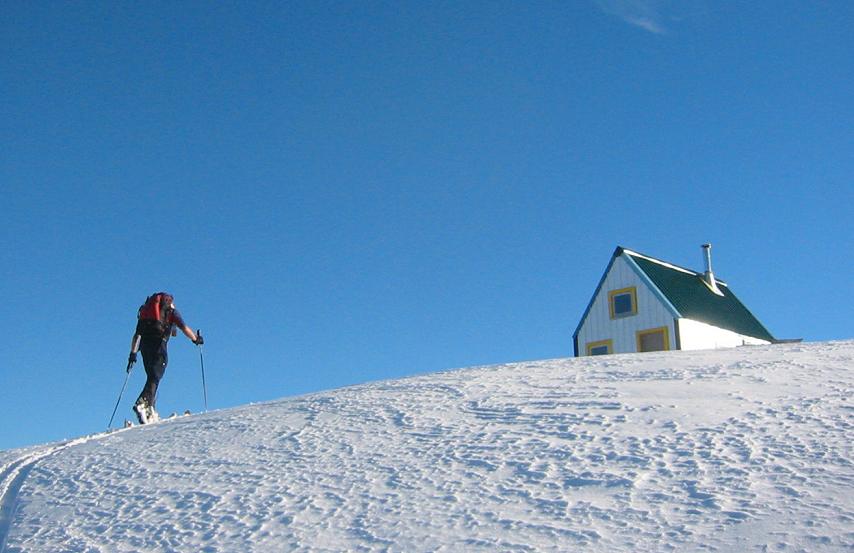 The hut itself is pretty spacious and comfortable. Big cast iron stove and all. The old hut journal has been saved and John checks out his 1994 entry in the journal; losing himself in memories. 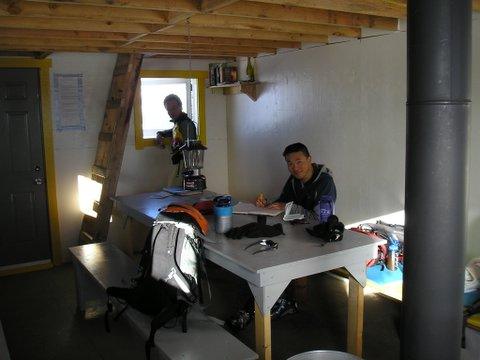 It’s then a short steep slog to the top of Mt Brew. 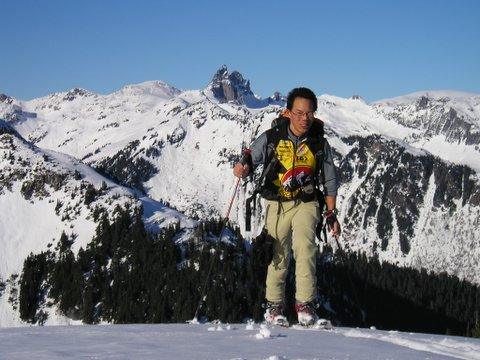 The view from the top is pretty good; the whole Squamish – Cheakamus Divide laid out in front of you. Surprisingly we didn’t hear a single sled.

Ping Pong Peak – a small peak to west of Brew looks promising for some steeper skiing. The bowls to north and west of Brew offer low and medium angle options. This new hut location and the terrain actually offers a lot of touring possibilities. Just needs more snow. 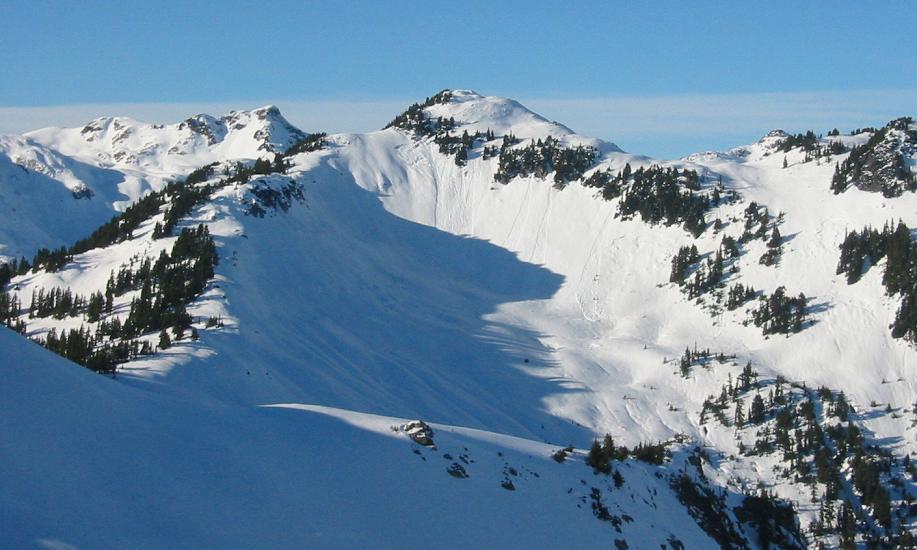 Well we’re here so we might as well ski. Here goes Doug showing his crust and dust technique. Doug is obsessed by the Tantalus Range so it seems appropriate to have him and that range in the same picture. 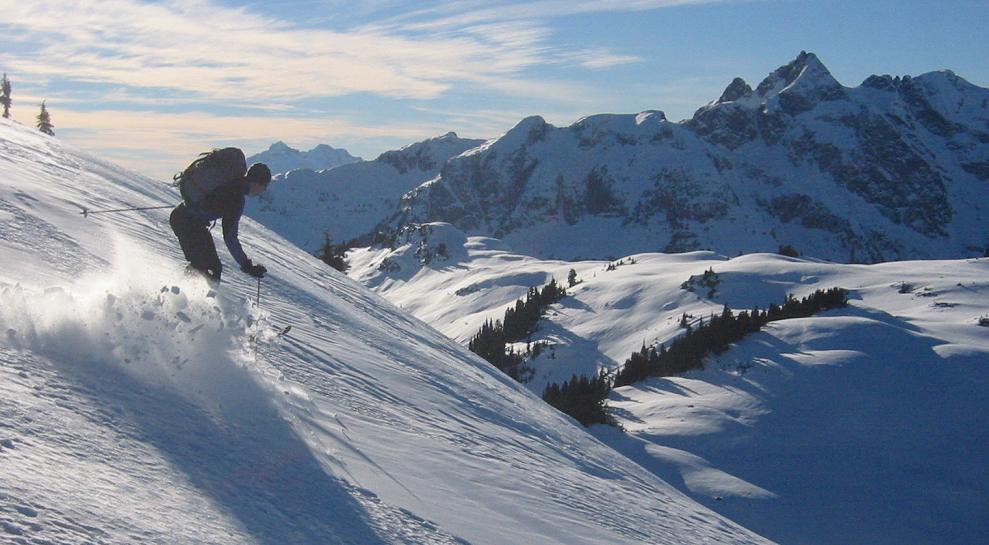 John with the same frame. 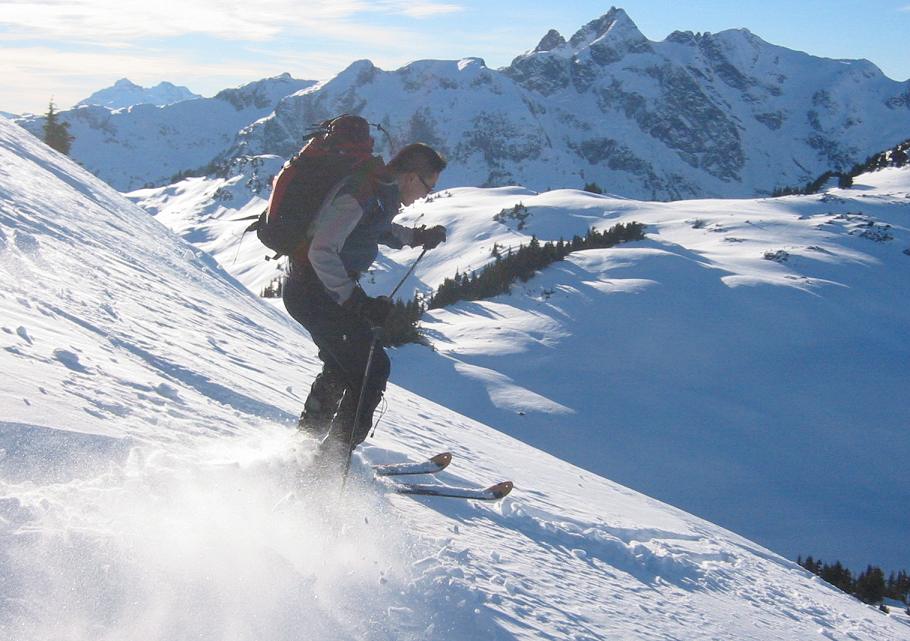 Our tracks down the west face of Brew. 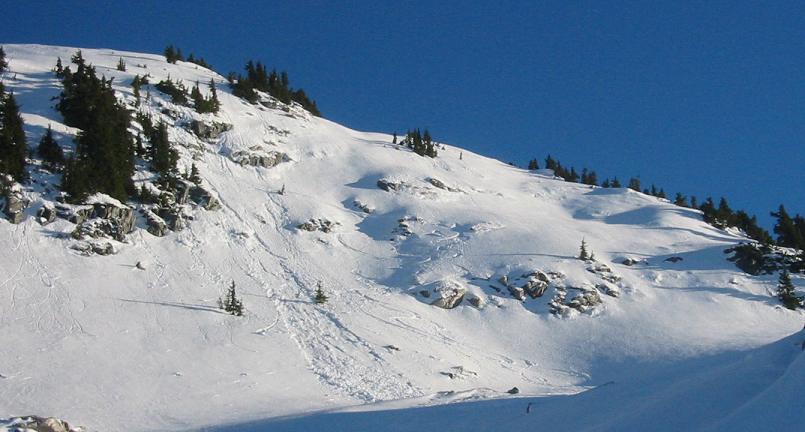 From there we skin up to the ridge on the west of the lake hoping for some turns down to Brew Lake. Brew Peak is on picture left with our turns still visible scars. The hut is on picture right. Sadly the slopes down to the lake are sun and wind-crusted and are not pretty skiing. 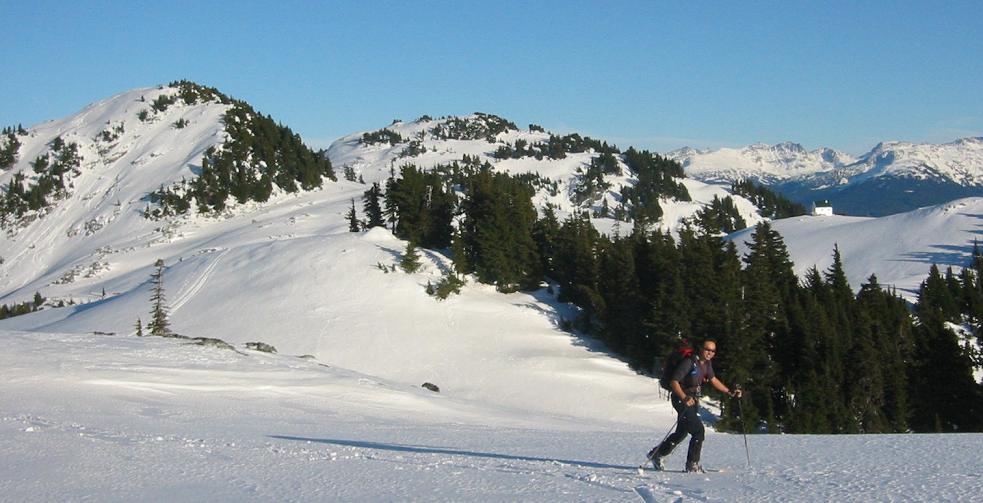 Good trip with a good group. We’re out at the cars by 4 pm taking about 2 hours to ski and hike out. 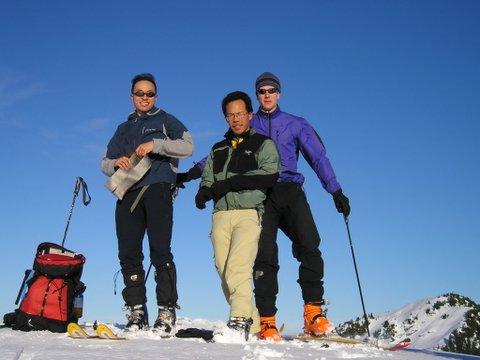 Total ascending was 1190m or about 4000 ft also on Kneissl Tankers and mohair colltex skins. Tough to give a climbing rate since it was half skiing and half bootpack/hike.

This entry was posted in 2005, ski and tagged mt brew, sea to sky. Bookmark the permalink.