words and photos by Lee Lau and Chris Kelly unless otherwise noted.

In an effort to find one more last-gasp of powder, Chris and I headed up from Lillooet bright and early to the Joffre Group. Out the door @ 430am; trailhead @ 5.30. Anniversary Col @ 10am. 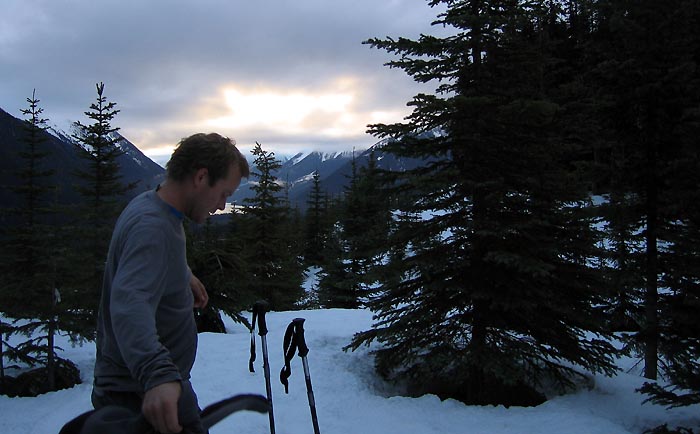 .Morning and someone still isn’t quite awake 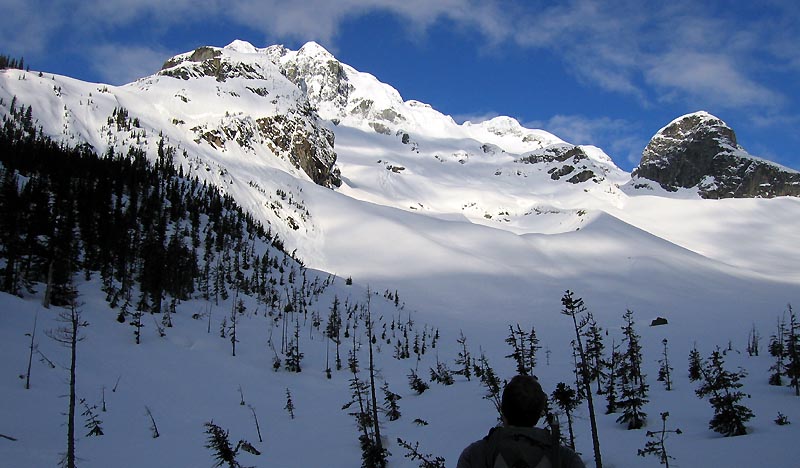 We caught another group of three on the Anniversary Glacier. Shortly thereafter we broke out of morning fog and into sun. The peaks looked surreal and it was warm and not windy. Best of all, there was new snow on the peaks and it looked good.

Breaking out through the cloud bands on the Anniversary Glacier 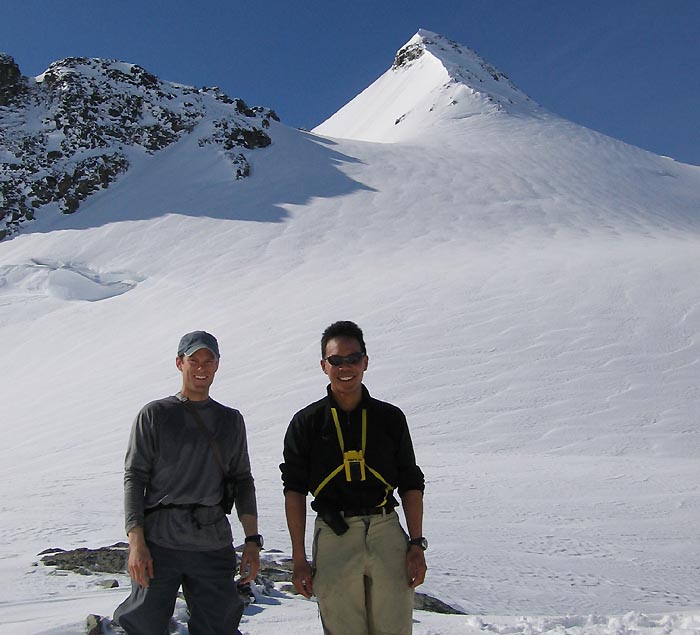 Chris and Lee on Anniversary Col @ about 10am

We had tossed around the idea of skiing Matier, then heading over to Slalok and skiing the Stonecrop Glacier. However, the approach is via a sun-exposed face and the sun had been cooking it – the snow on the NW face was so good that we decided to lap that face instead. 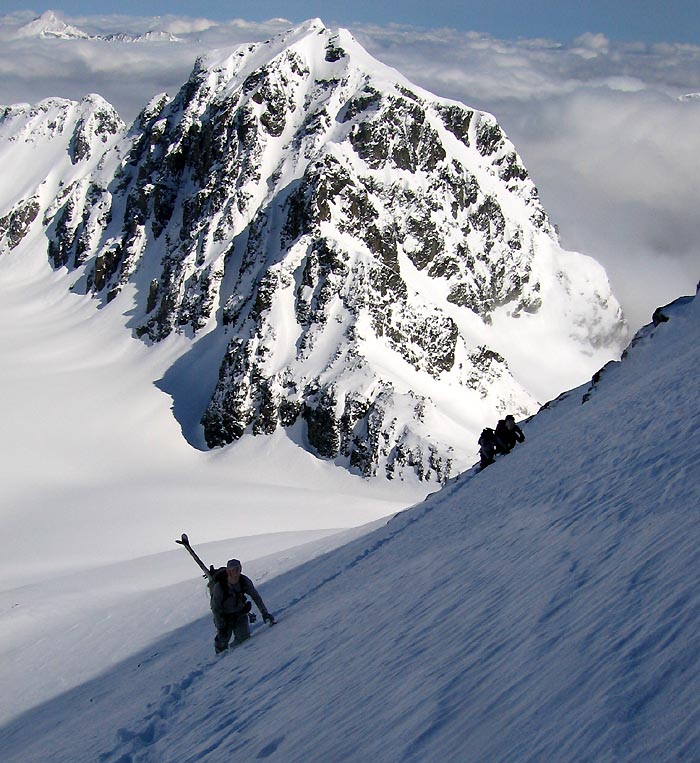 Climbing up the Matier N face

Another route is to traverse the Matier Glacier and climb the NW face direct via bootpack. We took the mountaineering route – summitted Matier then downclimbed off the peak via a ridge connecting the peak to a col just above the NW face. Needless to say the views are something else. 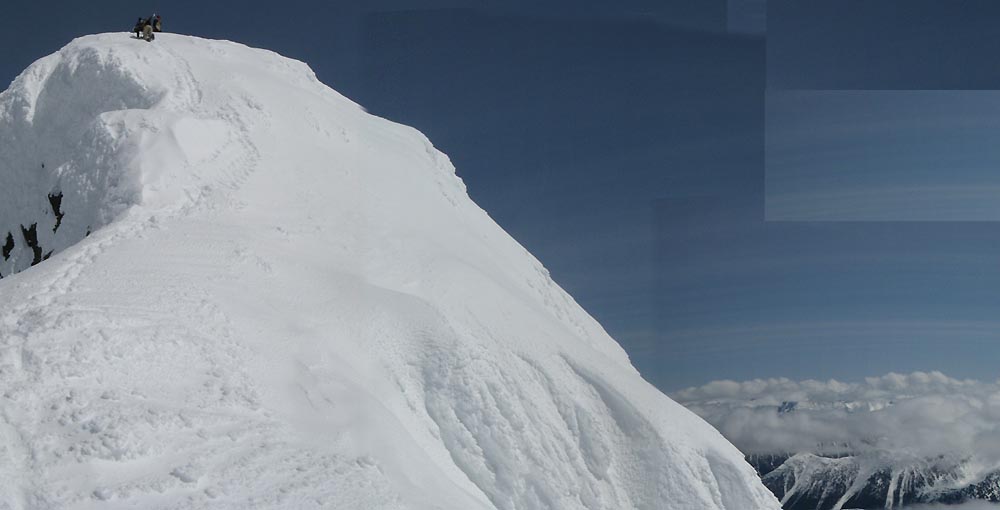 Downclimbing off the summit ridge to the NW col 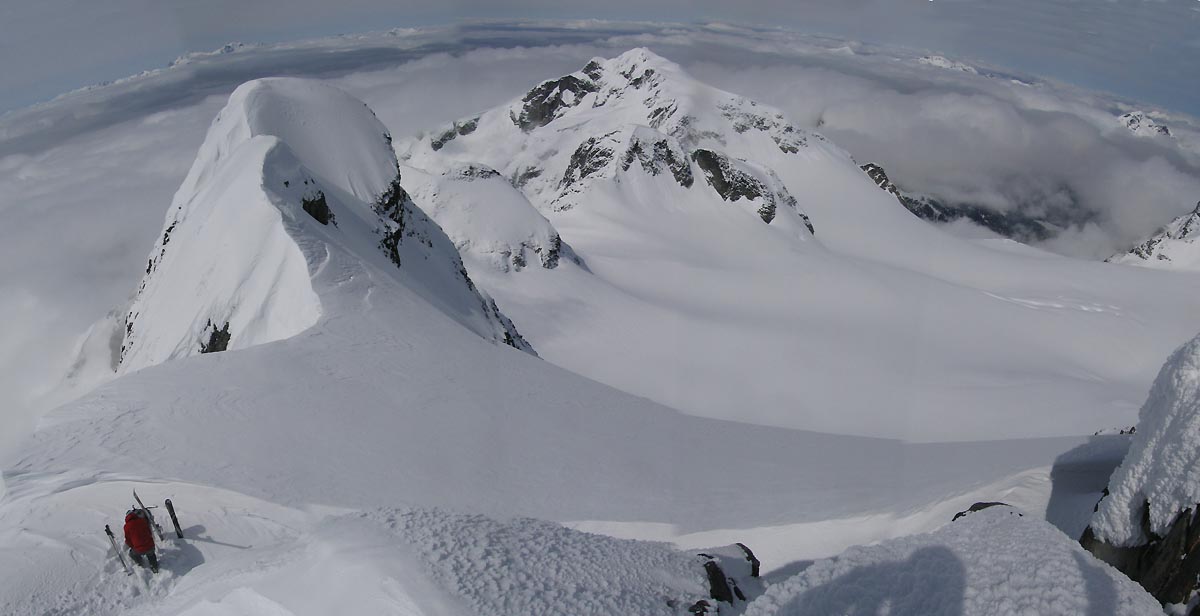 Looking down on to the NW face

The NW face starts off with a small section of slightly above 45 degree pitch then is almost consistently 45 the whole way down then benches out to 40 below the Matier Glacier bergschrund. The schrund isn’t a factor in May but it does open up quite a bit in July- August – see pictures of a ski trip to Matier late in summer here. 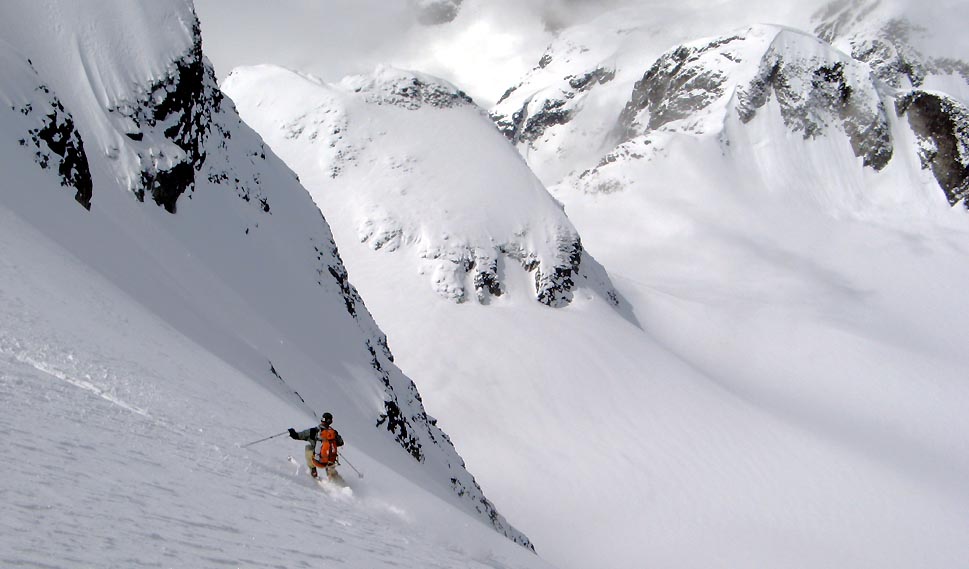 Lee making turns down the face 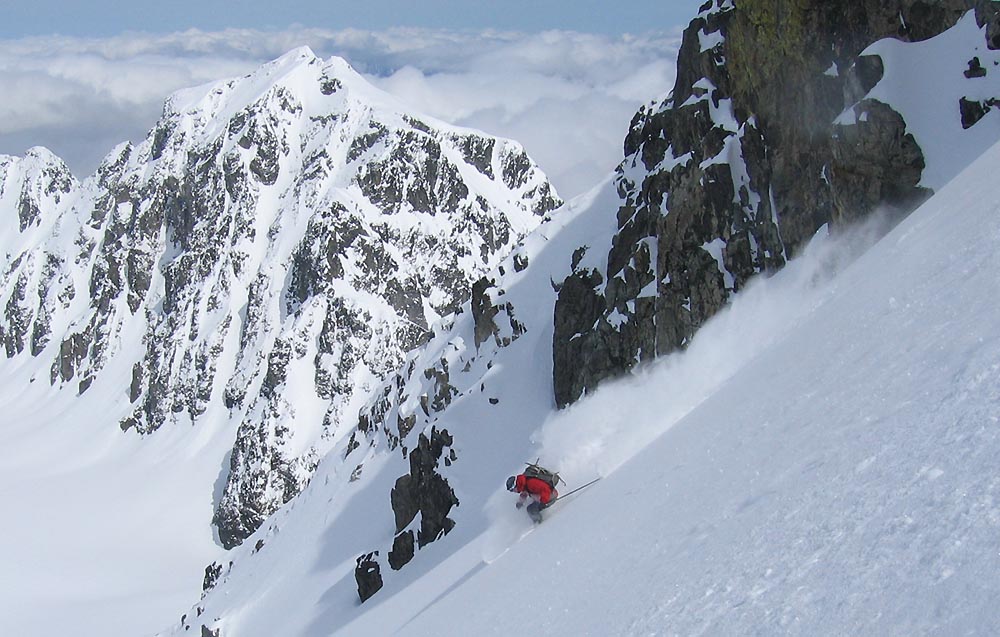 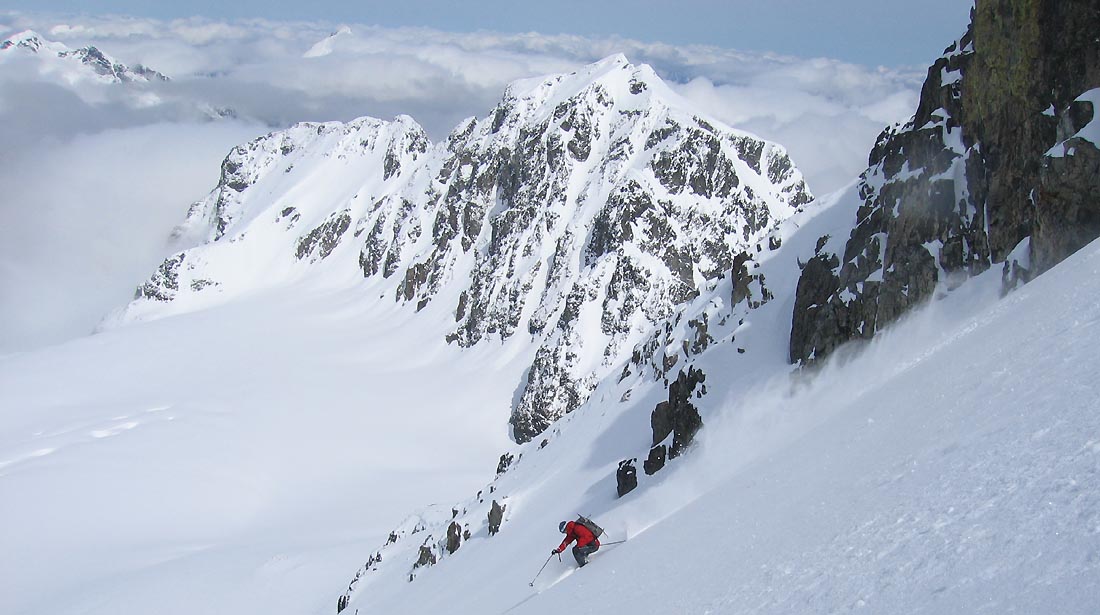 I watched Chris ski down and cross over the slope to duck out the way of some sluff. It was pretty big sluff and roared down the face cleaning it out. Then I went and made some turns – my first three turns were fine and I looked over my shoulder to see if sluff would release. The slope was clean so I got a bit complacent and made a turn without the shoulder look-back. I then promptly skied into sluff, got washed down for about 100 feet taken clean of my feet and then was rolled over to the side.

Picking up the pieces, I skied down to my pole that had gotten plucked out of my hands. I then skied out the rest of the face and apologized to Chris for scaring the sh%t out of him with my sloppiness. 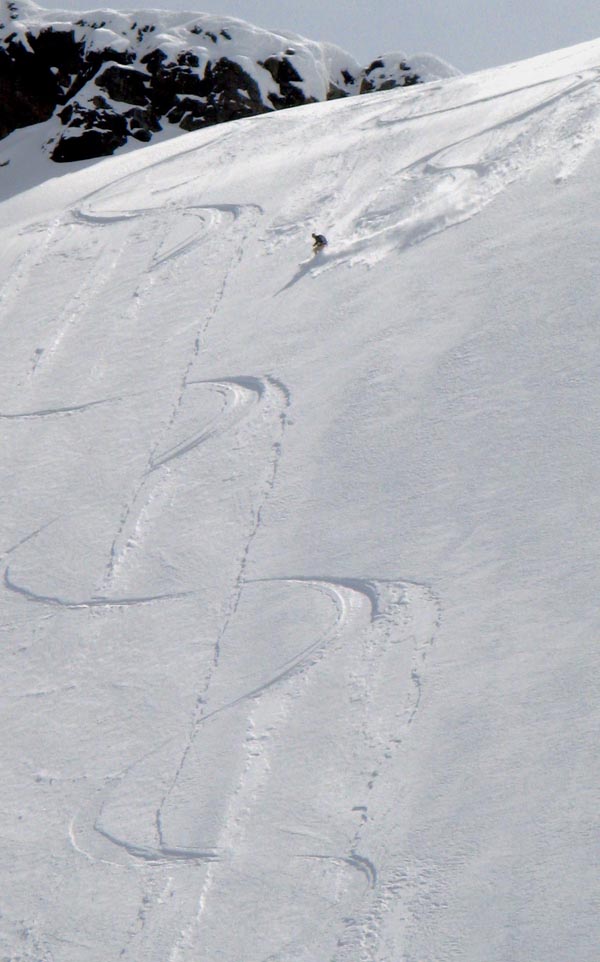 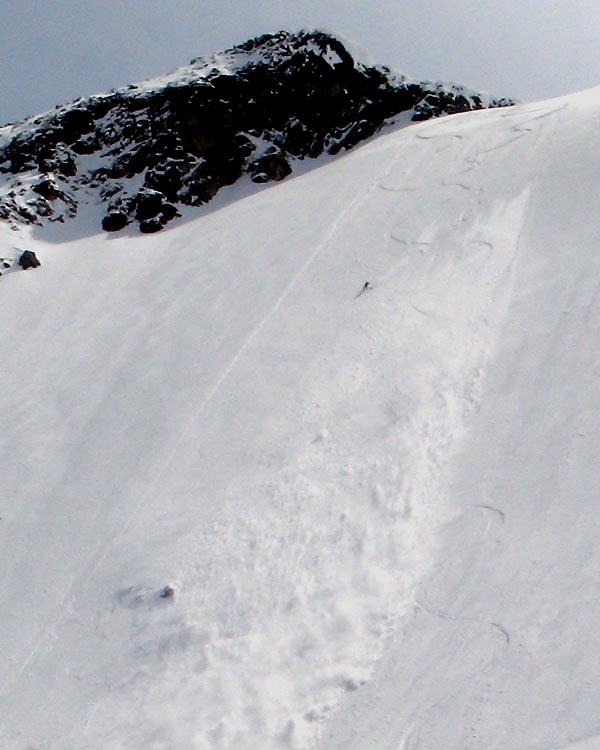 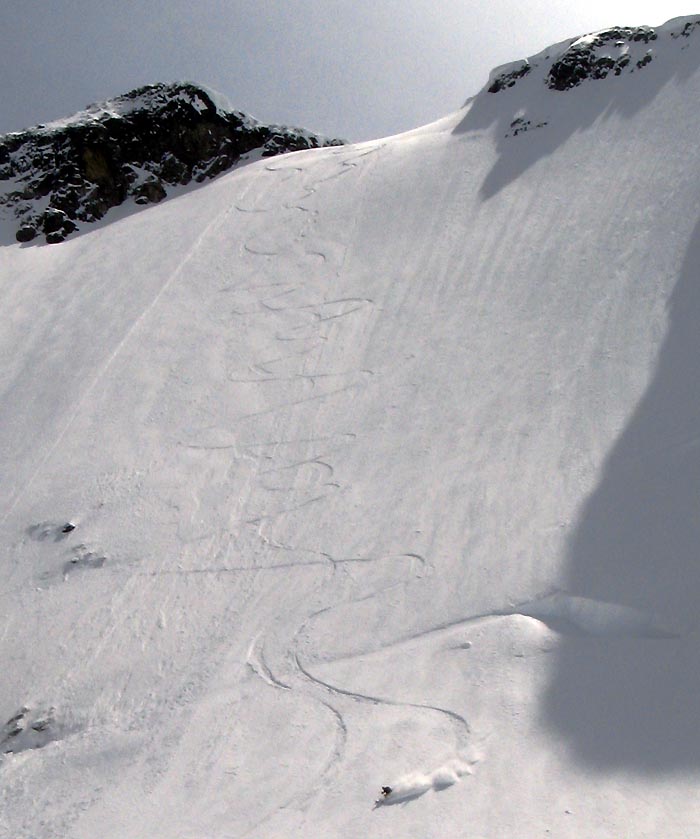 Climbing up for lap 2

Like I said, it was so good we decided to forego Slalok and instead headed up again. We started at about 12pm and were up the face by about 12:50 moving pretty quick on good firm snow. The sun hadn’t messed up the snow too badly yet and the snow was still firm for bootholds and axe. As we skied off the weather started changing a bit and clouds started forming. Counting ourselves lucky to get the weather window perfect we ripped down quickly and managed to ski back to Anniversary Col without having to skin.

We finished off with mach-speed run down the Anniversary Glacier dropping from 2300m to 1500m in about 15 minutes. 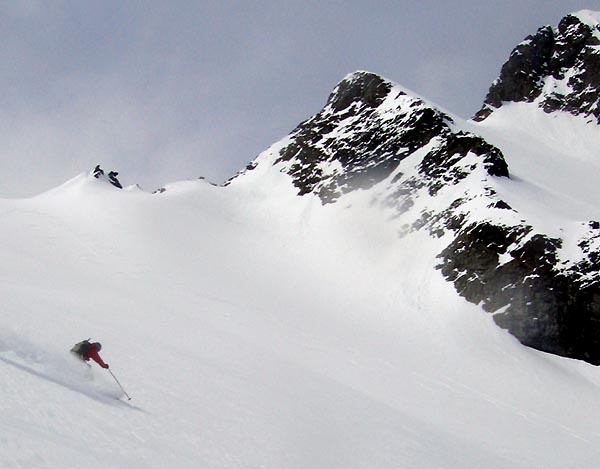 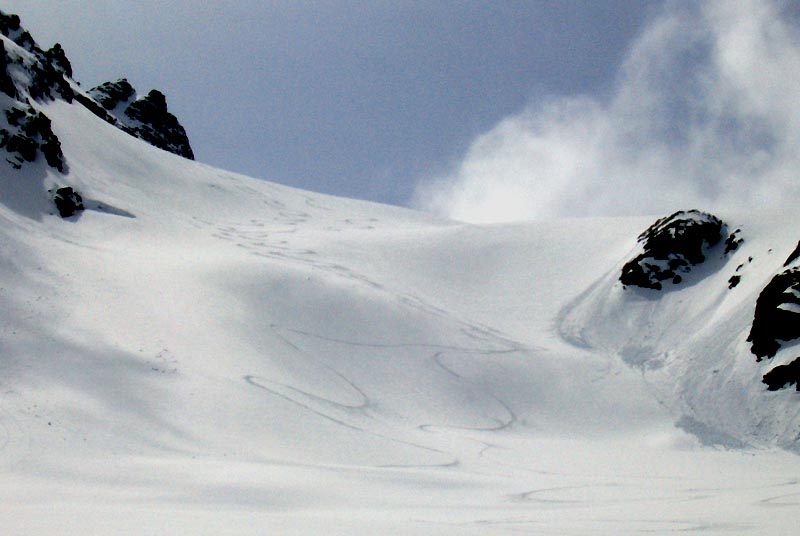 Finishing it out with tracks down the Anniversary Glacier

This entry was posted in 2008, ski and tagged Duffey, Matier. Bookmark the permalink.