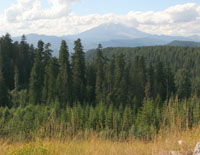 Mt. St Helen’s erupted on May 20,1980. It left a barren wasteland that has started to come back to life 27 years later. We visit this place often as it is an amazing area to ride and a testement to the power of nature. Examples of which we were reminded of on this trip. We rode Ape Canyon as an out and back in Oct 2000, and we did Ape Canyon again as a part of the Smith Creek loop in back in Sept. 2003. We were going to ride Ape Canyon again as an out and back on our way down to Mt. Hood for a Norco Demo on Ski Bowl. Here’s another site describing hiking in the area -> www.nwhiker.com 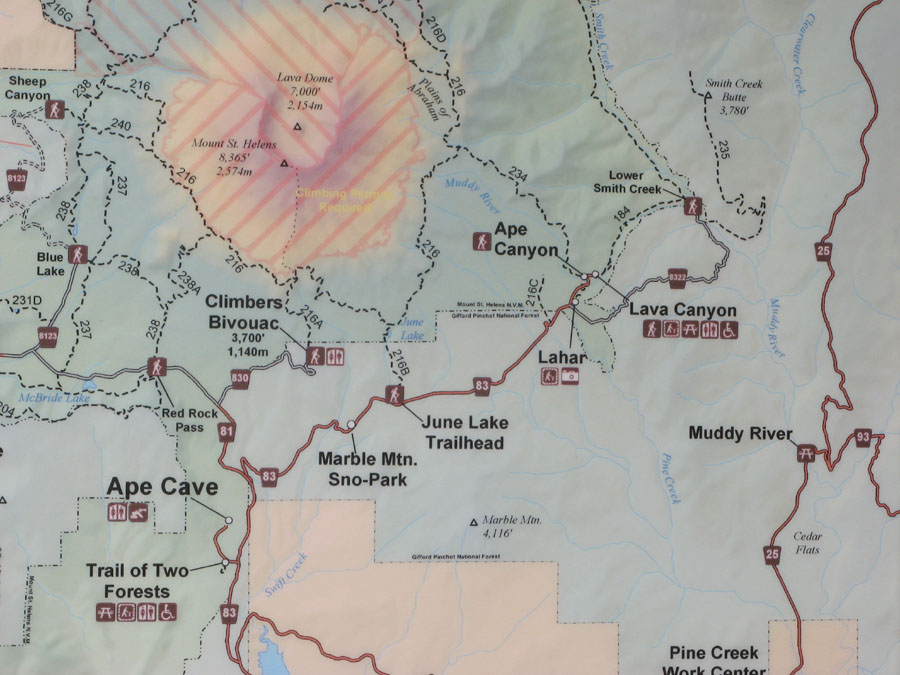 We got to the Trail of Two Forests on Thursday night at 10:30 and camped there. We hiked the 1/4 mile loop the next morning. It was an area that was flattened by a previous eruption 2500 years ago and had lava molds of trees that were encased in the lava flow where the trees subsequently burned or rotted away. The current forest has grown on the lava. Pretty cool actually. 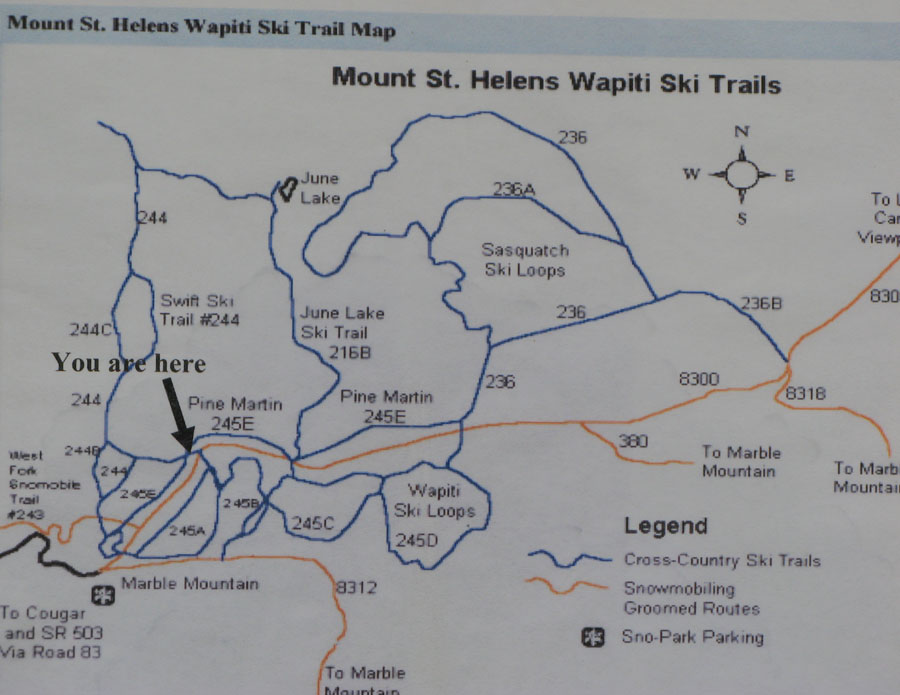 Due to a wash out from June Creek the road was closed at the Marble Mountain Sno Park. We parked and rode from there. Since we’ve done Ape Canyon as an out and back we decided to try a new route. Up to June Lake, to Loowit Trail (Trail 216) then down Ape Canyon. 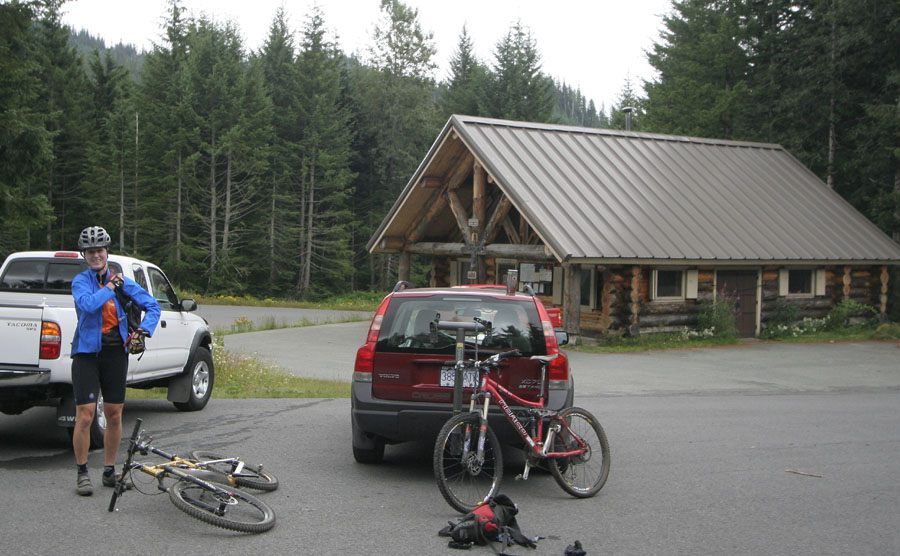 The parking area with the Marble Mountain Ski Hut. 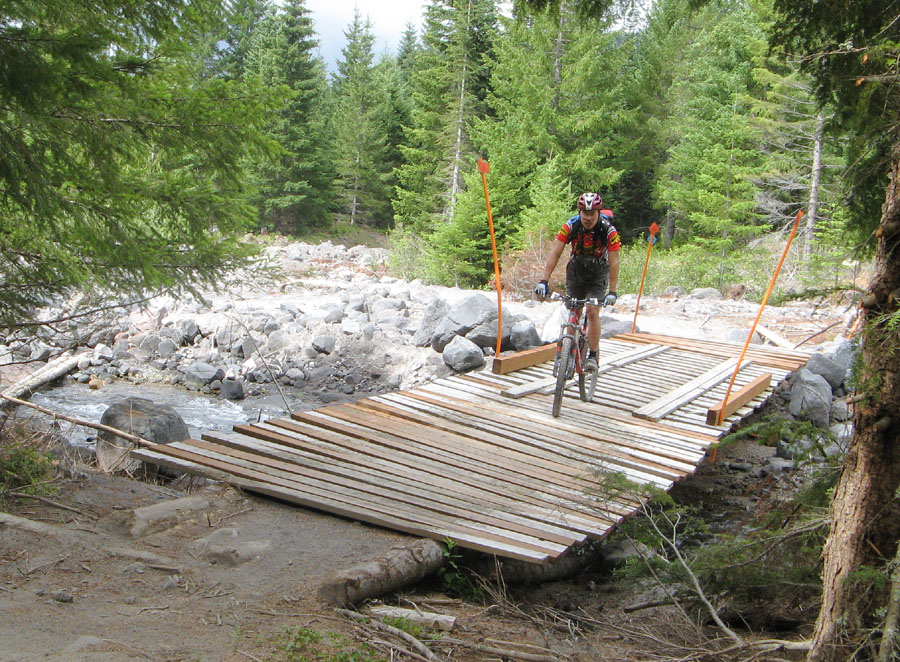 The temporary Bridge over the washout. 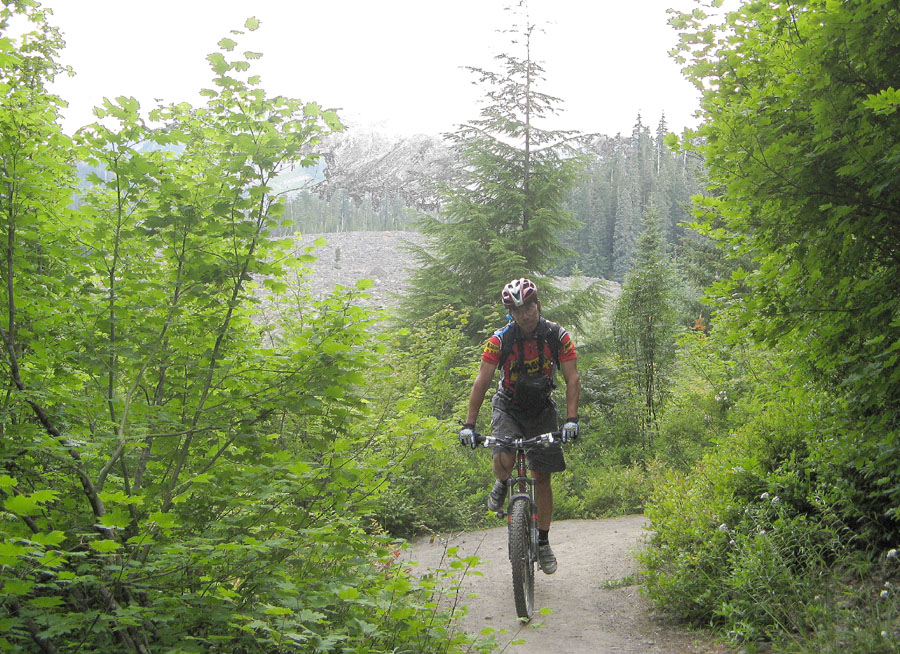 The trail up to June Lake started out promising. You could see a boulder field and views of Mt. St. Helens. 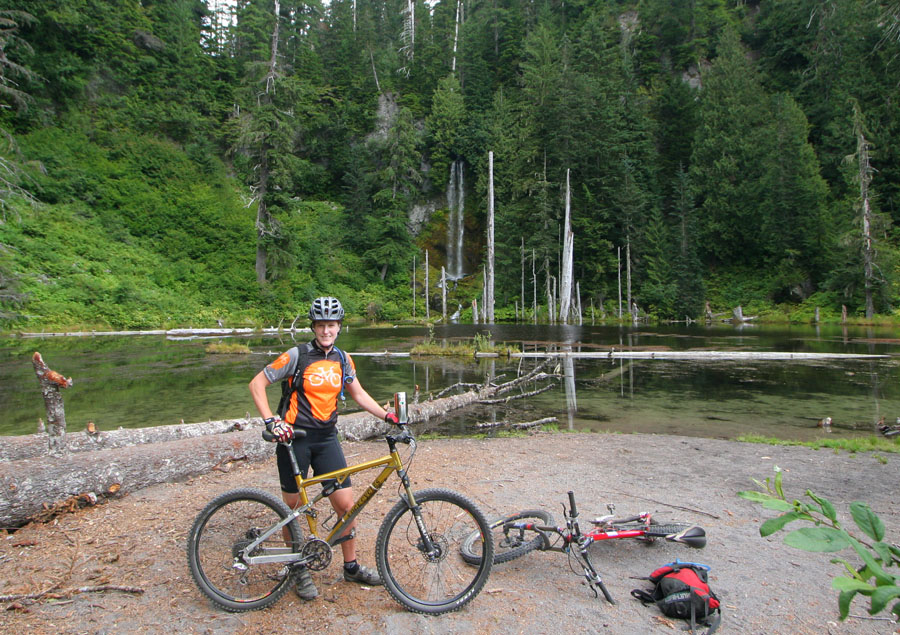 June Lake was quite nice. Lots of little fire pits around it and a cool waterfall coming from the lave fields. 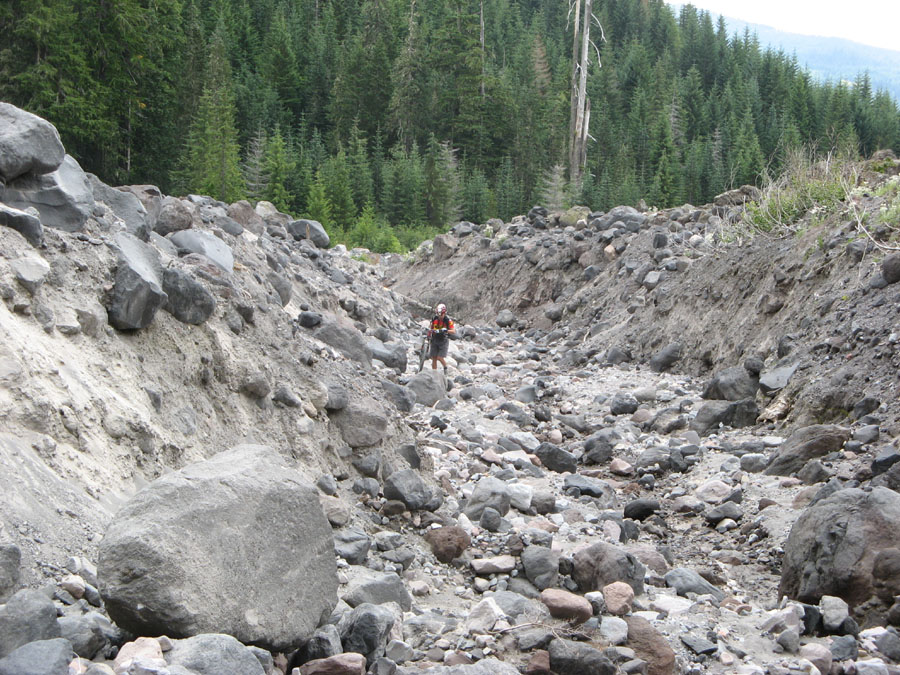 Then the trail ended… and we had to do some searching 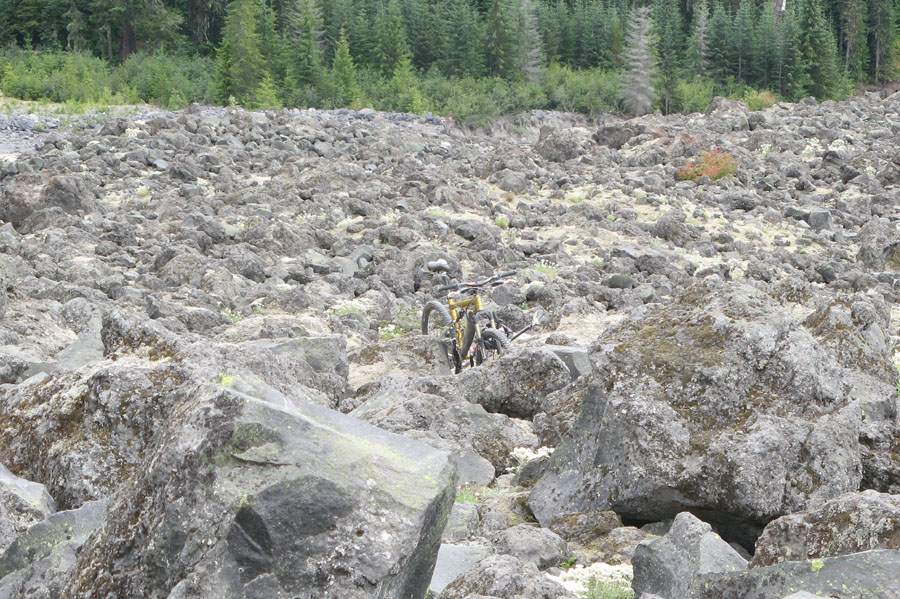 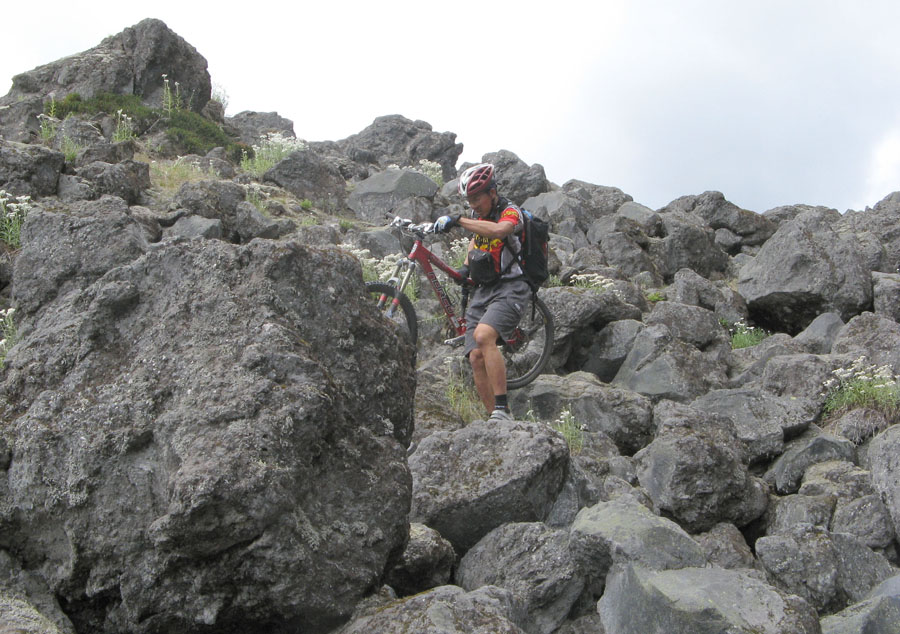 After a short hike up the boulder field with no obvious trail in sight we started the descent! Apparently a trail was there back in some day…Check out this story from Club Tread of a hike on the Loowit Trail. I guess the Loowit Trail – June Lake junction was now washed out by all the winter flooding. 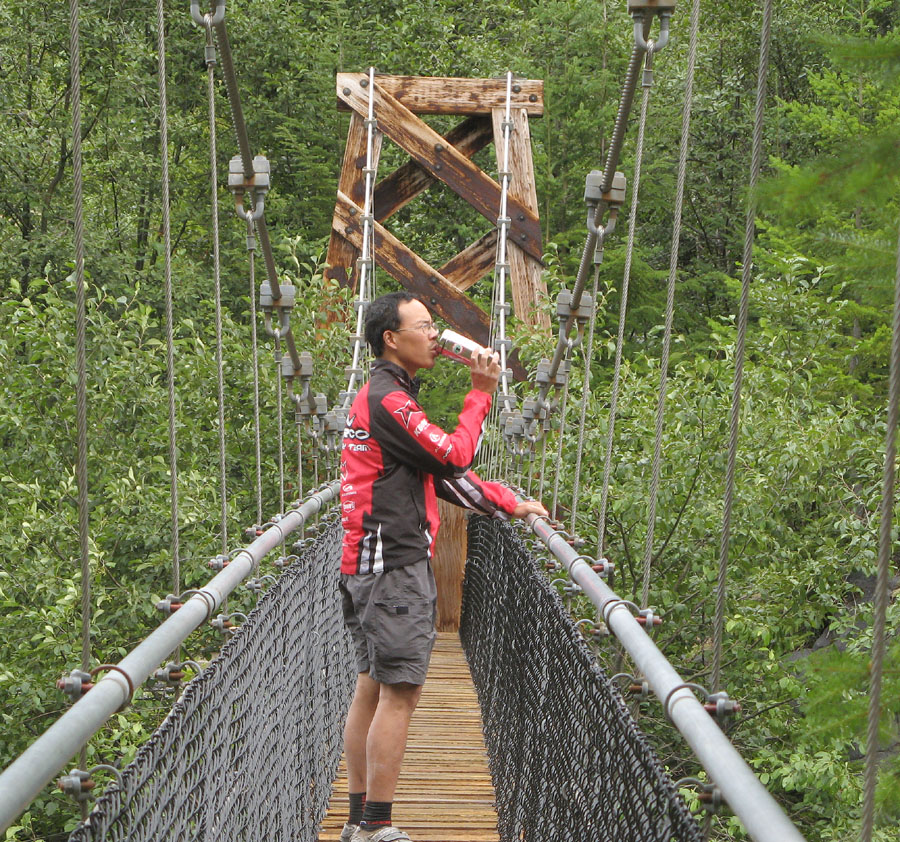 After deciding not to continue on this bikeaneering route, we rode back down June Lake Trail, rode to the Ape Canyon trail head and decided to do a little hike down Lava Canyon since it was closed and there was nobody around! The trail was in great shape, here is a new suspension bridge they are building. 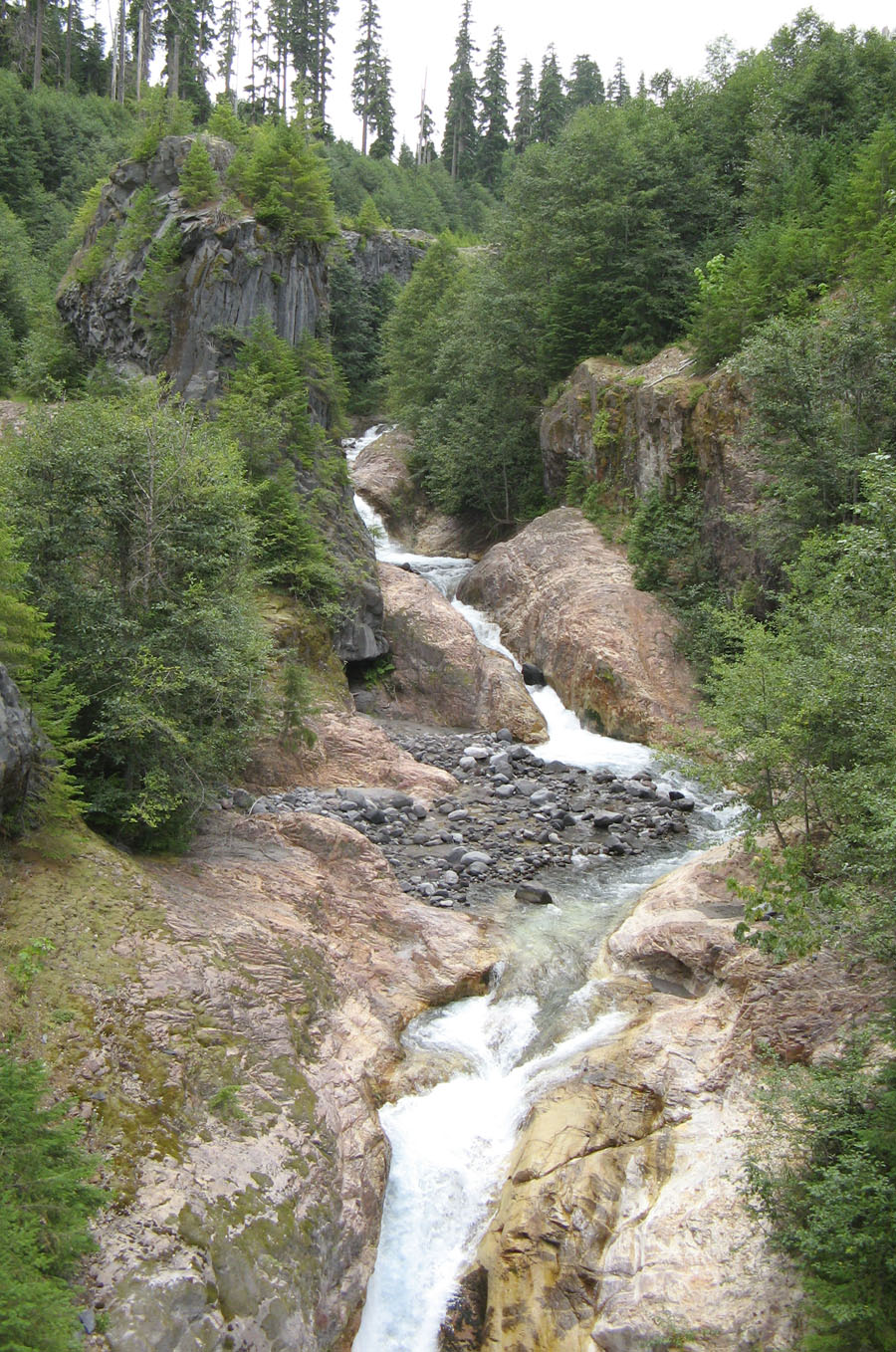 The giant columnar basalt is from a lava flow over 2500 years ago. It was subsequently buried and recently exposed along with this canyon in 1980 during the last eruption of Mt. St. Helens. 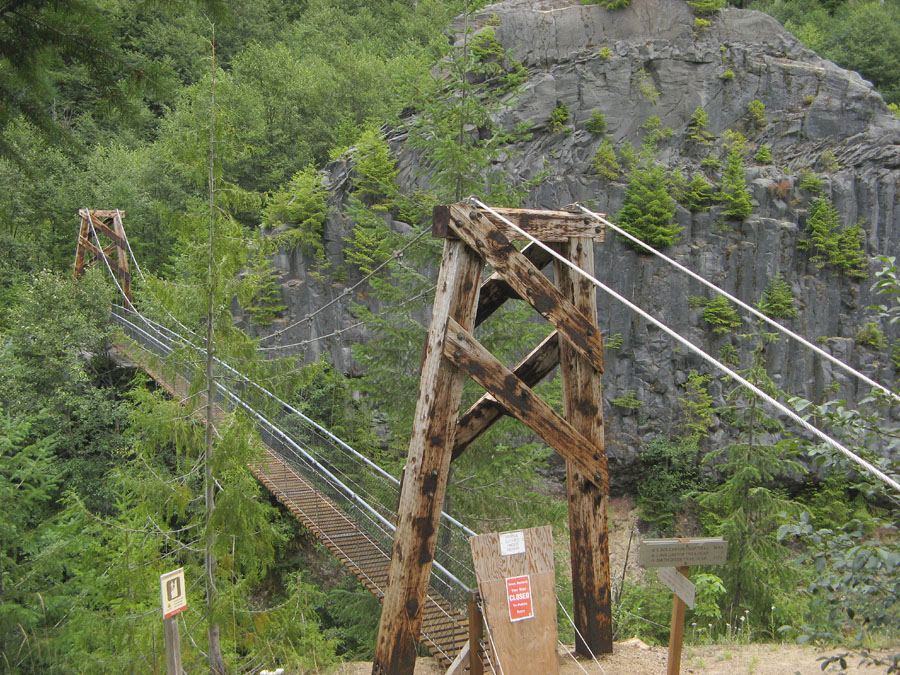 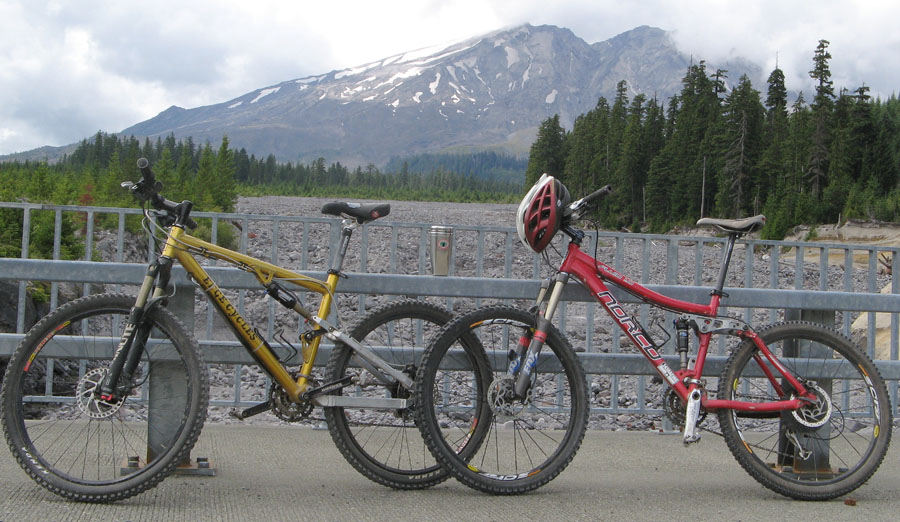 A bridge that crosses the Muddy River. Ape Canyon follows the forested area to the right. We didn’t make it up to the Plains of Abraham on this trip due to getting side-tracked by the washed-out Loowit Trail.

Check out the view on a sunnier day 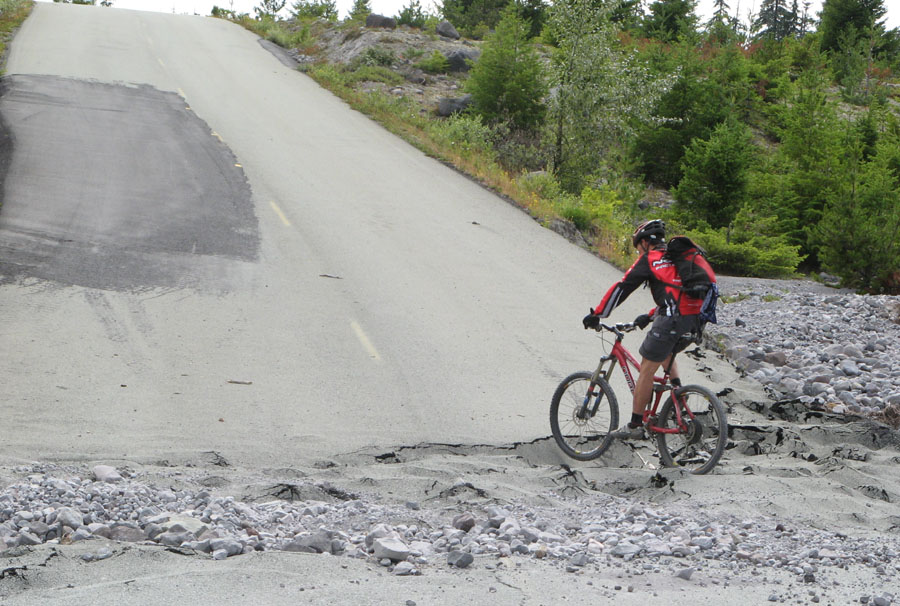 We rode back on the road that will require a bit of work when/if they finally fix the washout up the road!

After our ride on Mt. St Helens we drove to Hood River and then to Mt. Hood Ski Bowl – Government Camp. Pat was having a Norco Demo Day at Ski Bowl. We tried out a few 2008 Norco’s and the ski area. 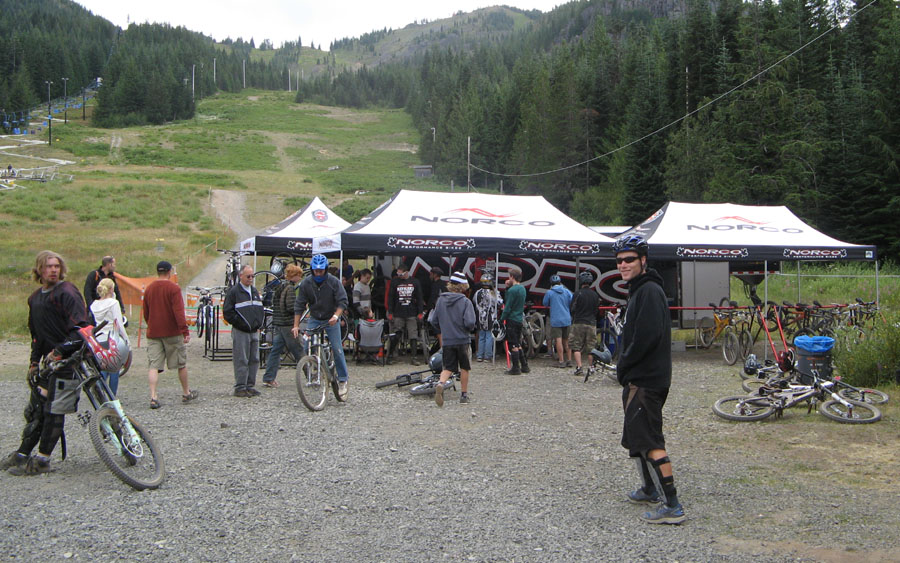 The Norco tent with twenty four 2008 bikes to Demo! I tried the Norco Shore and the Atomic – which was last years DH frame. Nice bikes! Dom is wondering if he can get his hands on a 2008 Shore! 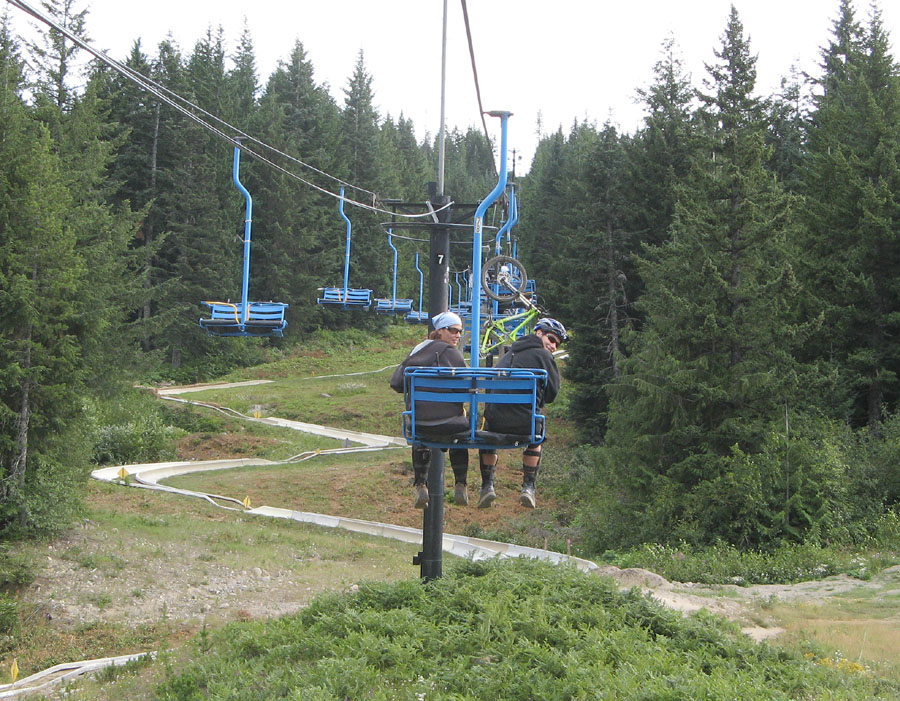 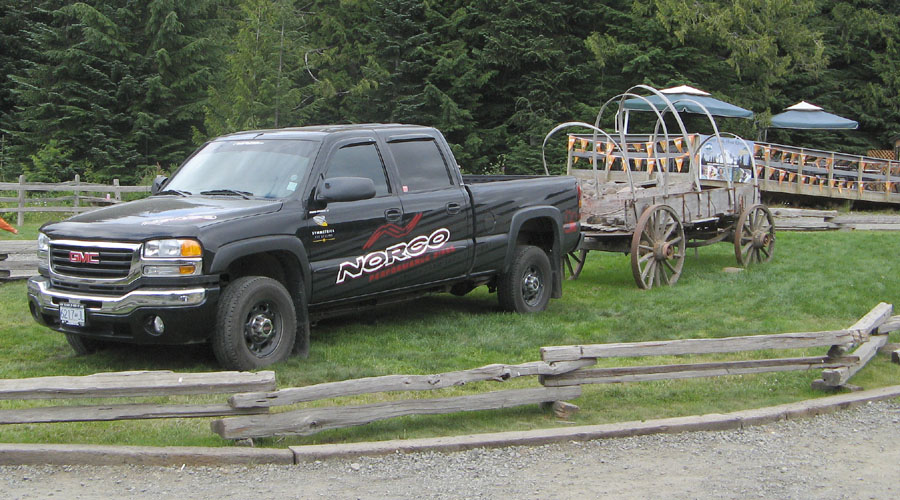 I wonder if this would have been a faster ride! 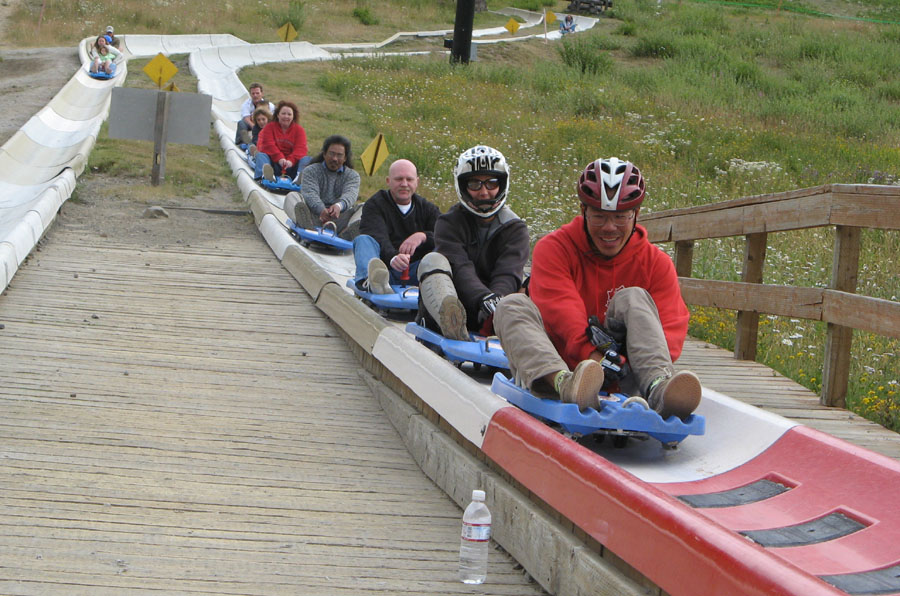 After riding above the slide all day we decided to give er a try! Note – don’t go behind the asian guy…. 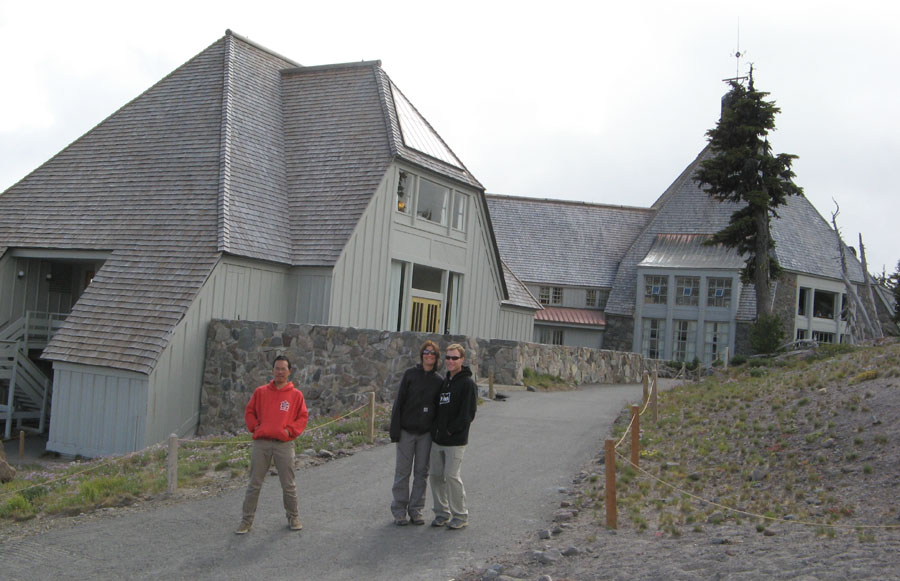 In the afternoon we decided to go check out the Timberline Lodge on Mt. Hood. The exterior was used in the movie – The Shining. 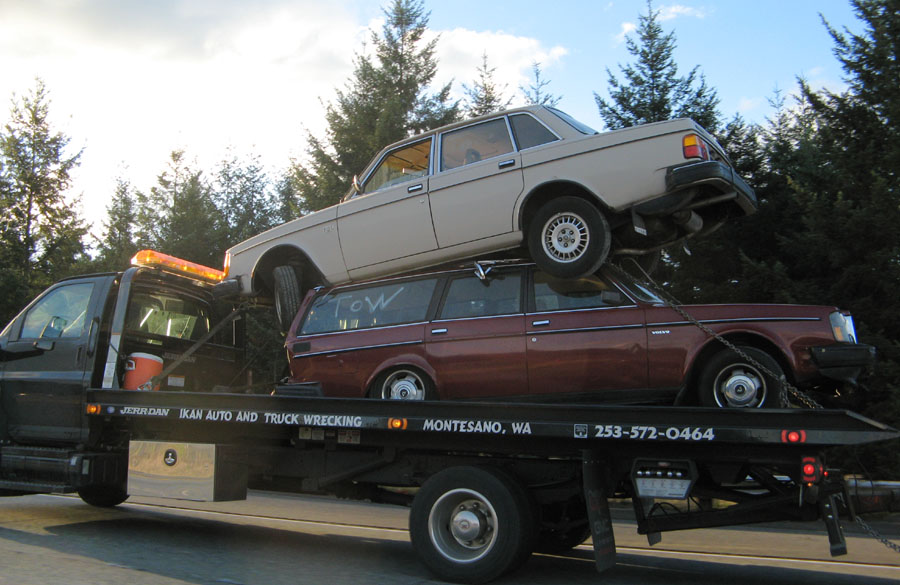 Some Salvaging on the I-5!

Sunday we got rained out and did the big drive back to Vancouver. Due to construction on the I-5 it was SLOW so we took some minor roads to the East of the I-5. Probably just as fast! Then only to wait for an hour at the Aldergrove border crossing…. After we got there the waits turned to two hours. Makes going to the US a HUGE inconvenience.