Today is the last day of riding for our tour. It seems a good time to show the distance we’ve ridden; all the way from Deer Lake two-thirds of the way down the West Coast up to L’anse aux Meadows – at the northern tip of Newfoundland.

Again there’s a nice tailwind brewing and we set off. Plum Point itself is south of the Labrador ferry and I’m hopeful that the clouds will clear so we can catch glimpses of the Labrador coast. As its mid-summer there are no glaciers in the Gulf of St Lawrence – a typical navigation hazard for boat traffic in winter and spring for these coastal waters.

One thing I have noticed about Newfoundland is the remarkable lack of wildlife. Typically in BC, there will be all manner of creatures glimpsed from a bike while touring. Wildlife sighting in Newfoundland is comparatively rare. Its with some undignified joy that we come across a moose skull. Despite Bryn’s protests I decide to make the moose skull part of the sag wagon’s decoration. 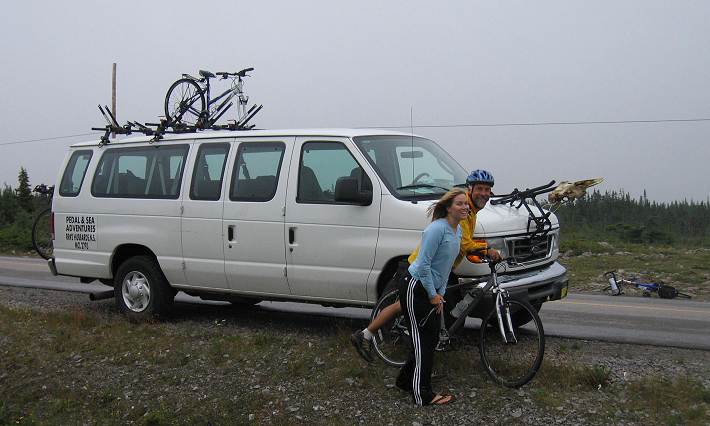 Kevin approves of my decorating efforts. 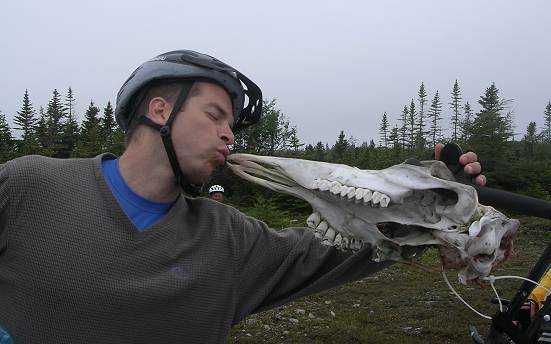 Abandoned salt-shack at Dead Man’s Cove shows the wear of time. This cabin could be a year old – coastal Newfoundland weather is not kind to outside trim and finishings.

Further up the coast – at Shoal Cove East – the weather breaks for the better. It is a saying in the Canadian Rockies – “if you don’t like the weather, wait a minute”. This holds true for Newfoundland. In this picture you can see a stack of wood. Locals are allowed to cut wood in summer for use in winter. They then stash the wood in a place where it will dry.

I cannot tell you how many of these gorgeous coves there were. It seems like there is un-ending miles of coastline dotted by the odd human habitation. You can see the Labrador coast to the far right of the picture.

Upon viewing the map last night – it looked like the coastal road would be the gem of this ride. Our plan was to get off the bikes as we left the town of Eddies Cove West (68kms into the day) and then to ride in the van till L’anse aux Meadow. To ride the whole way would be 140 +kms; with the latter part through visually uninspiring landscape somewhat like artic tundra. Feeling good, I tell the van that I’ll keep pedalling till I get caught. With the tailwind I manage to stay away from the van for another 25kms averaging 40+ km/h! This is the way that the decent roadies must feel I guess. Here I am getting caught by the van just outside St. Anthony’s Airport and hamming it up for the camera. 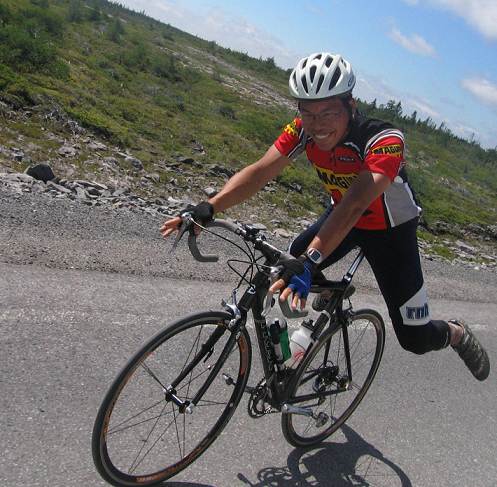 Finally we pull into Gunner’s Cove. We don’t stay at Gunner’s Cove proper but instead at the delightful Valhalla Lodge B&B. Here Annie Proulx stayed while she authored The Shipping News. Again, SPECTACULAR VIEWS of the Atlantic ocean and its inlets from the porch – highly recommended. The proprietor, Bella Hodge, shows why she won entrepreneurial awards from the provincial government as she really knows how to put on a feast for guests and make them feel comfortable. 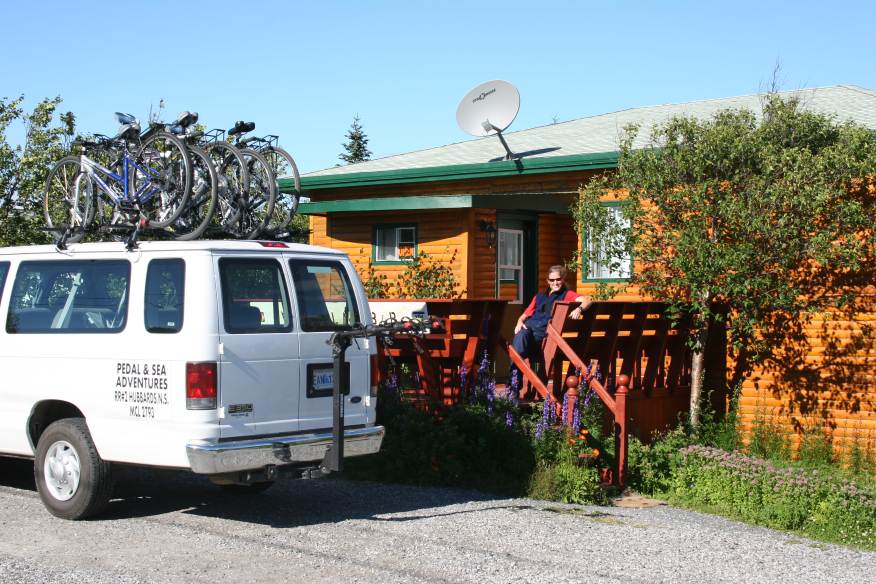 For some inexplicable reason I neglected to take a picture to show the view from the back deck so here is a picture linked from the Valhalla Lodge web-site. 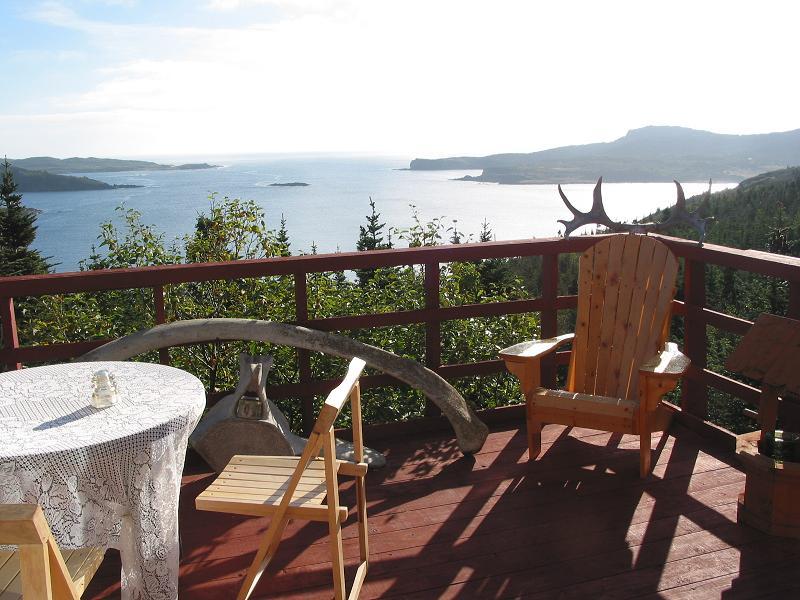 After a mellow veg session on the Valhalla Lodge’s deck we are off to L’anse aux Meadows. While educational I must admit to some disappointment. Keep in mind that this is an archaeological sight and I’m not a Viking buff. However, the exhibits did seem somewhat contrived if well – meaning. Here is a sculpture donated by the Norwegians to the site. 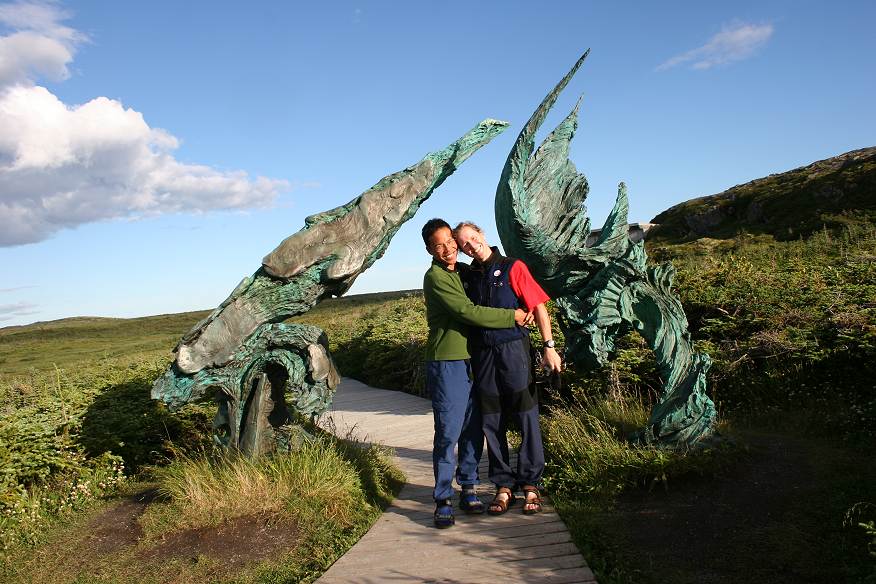 Parks Canada has attempted to recreate a reasonable facsimile of the habitations of the Vikings. To say it is desolate and prone to being windswept is an understatement. As one looks around the boggy surroundings, one wonders what the Vikings were thinking to imagine that this would be a good place for a colony. 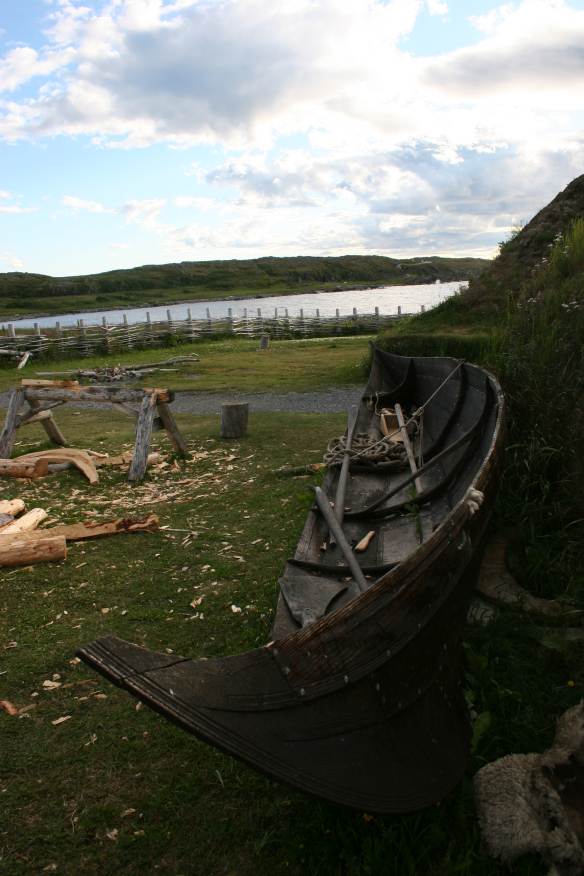 Strangely, I am drawn to moose heads. 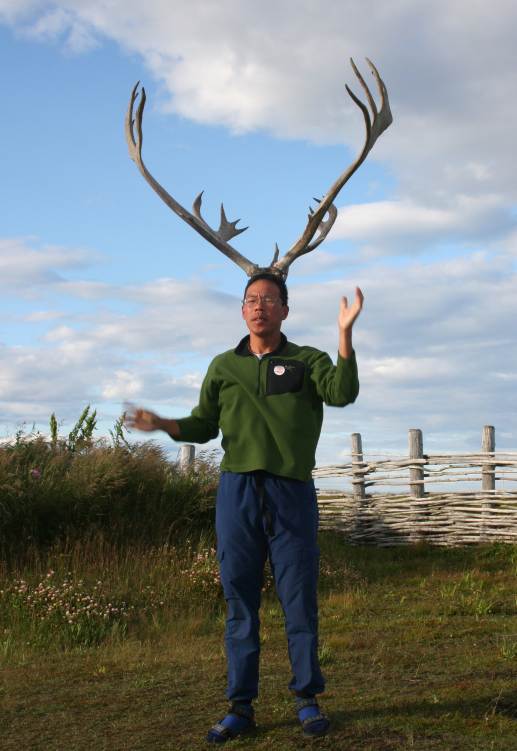 I am also drawn to kitschy reproductions of Viking artifacts 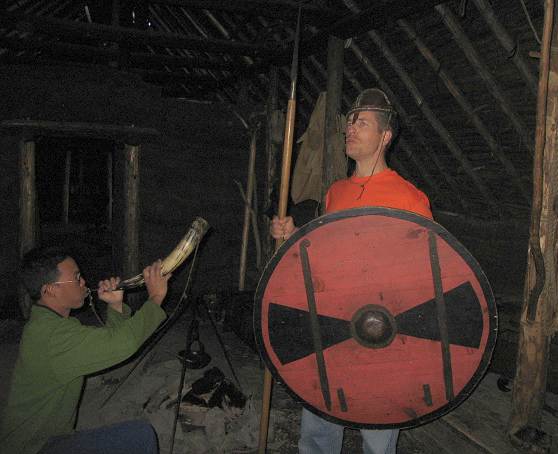 We end our formal Newfoundland culinary experience in dramatic flair with a dinner at the Norseman Restaurant at L’anse aux Meadows. The building doesn’t look like much from the outside but inside is a gastronomic epicurean feast waiting to burst out! You will need a reservation for weekend summer nights. This isn’t your typical cod or meat and potatoes dinner; this is food that begs to be savoured.

The views aren’t bad either.

I will miss the Newfoundland sunsets.

The next day we ride the van back to Deer Lake and then are dropped off at Corner Brook where we will spend the rest of next week. This is my first time on a guided bike trip and I must say it was a great experience. The Viking Coast is relatively remote and logistics of travelling there are difficult to plan for inexperienced bicycle tourists like ourselves. Without the local knowledge of our guides we wouldn’t have seen a lot of sights worth seeing, we wouldn’t have eaten a lot of food worth eating and I doubt we would have caught local flavour in the luxurious way that we did.

This entry was posted in 2005, bike and tagged newfoundland, pedal and sea adventures. Bookmark the permalink.