The North Shore Ripper is a series of fun events (I can’t call them races as you have to take them seriously to call them races). The Ripper series is really a benefit for a local trail organization, the NSMBA, with which I volunteer and is meant to be fun. The Rippers culminate in the Triple Crown poker ride where you ride all three mountains of North Van in one day – best described in this article at NSMB. At certain checkpoints you get a playing card and at the end of the day, the rider with the best poker hand from the cards wins!

Really that simple. Each checkpoint is at the bottom and close to the top of Seymour, Fromme and Cypress mountains. Each rider gets to pick their own route but there are logical ways to get up and down.However, that doesn’t mean you can’t get creative as this story will show. Read the NSMB article if you really want to know the rules. The only real rule you have to know is that there are no rules. You can ride any bike, you can shuttle, whatever … as long as you make it through the checkpoints.

Here I am on Saturday morning intently preparing my bike. I’ve picked the oldest loudest jersey I have in honor of this occasion. Unfortunately my Monty one piece skin suit is with a buddy on the island or else it would have seen light of day. 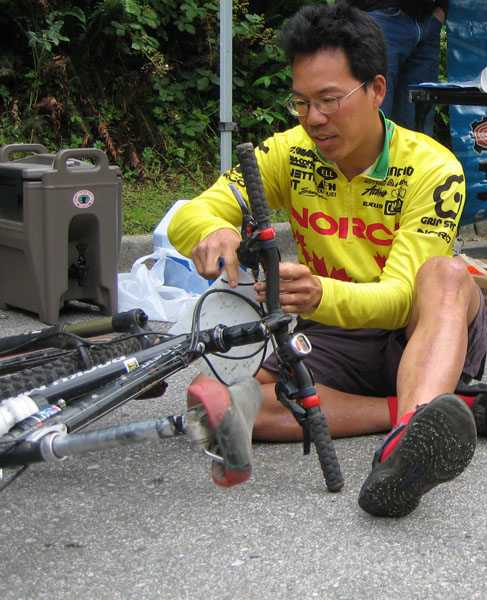 Eating and drinking right is very important to base fitness. 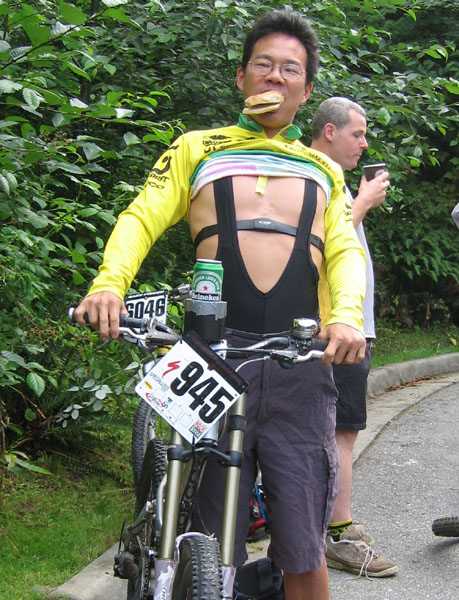 Brian Berg – my riding buddy; and Trevor who will ride with Team Shuttlewhore (more on them in this thread) also are intent on preparation. 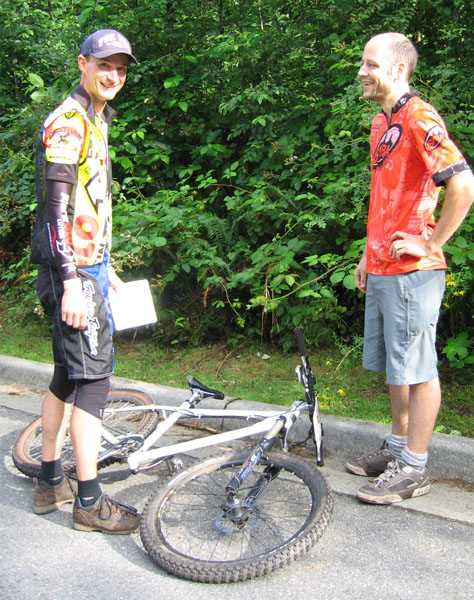 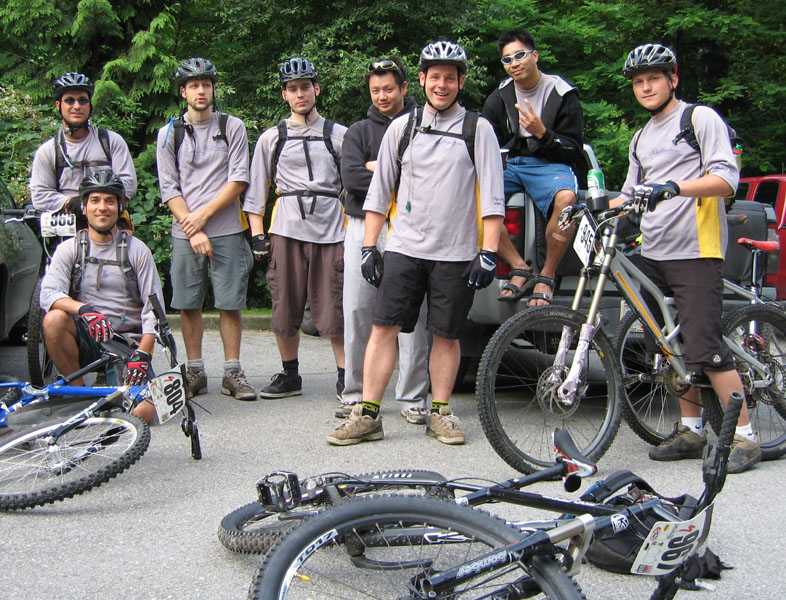 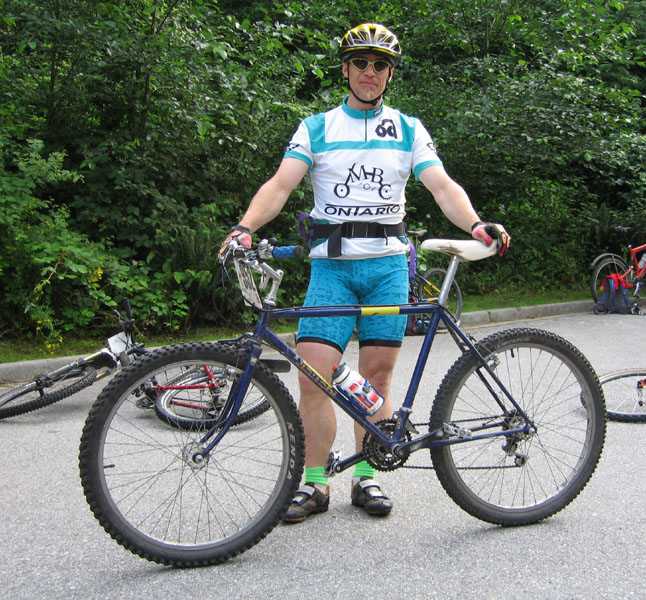 Sharon and Tammy hard at work signing up day of race registrants and passing out numbers. Thanks you two! 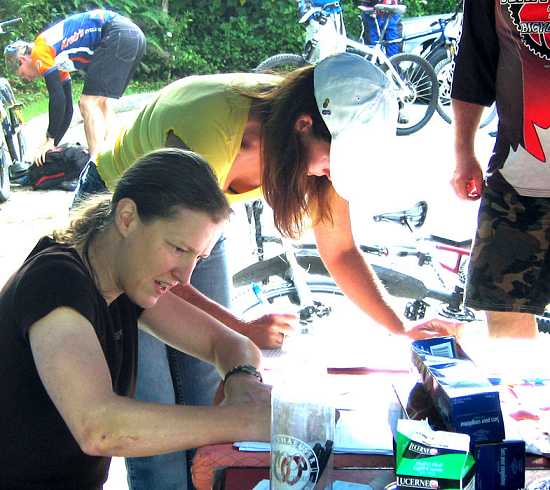 More getting ready after making sure that my glasses match my riding panties and outfit. 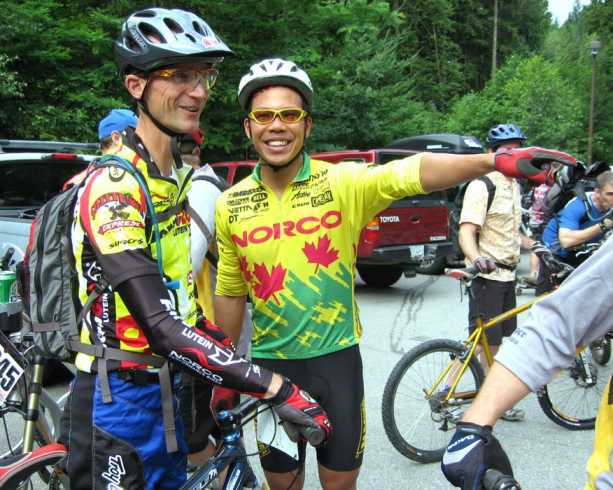 Rider’s meeting! Let’s explain the rules …. there are no rules!

Yes really, says James — there are no rules! Do what you want. 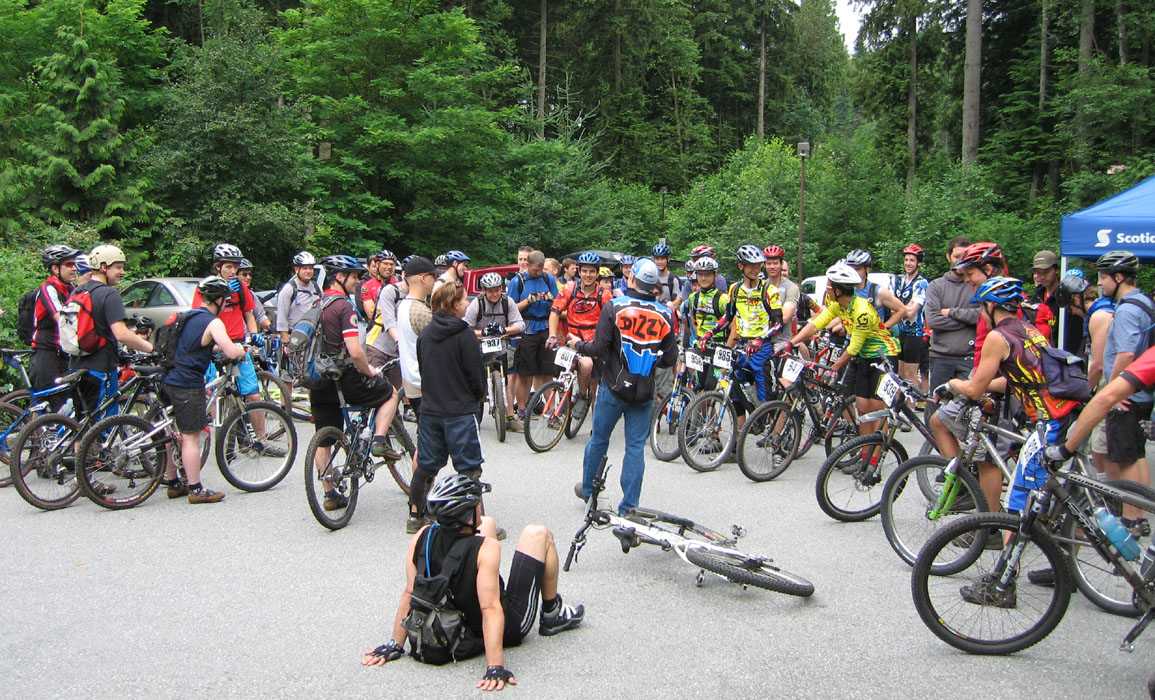 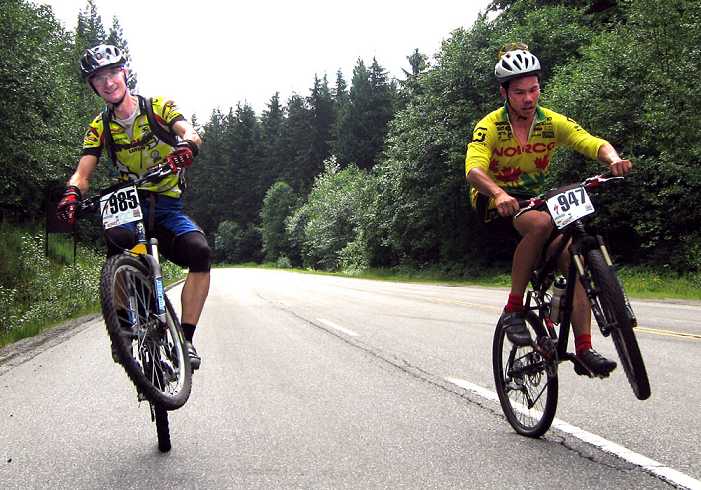 JF, Stu and Rob are first non-shuttlers to the CBC trailhead. Five minutes ahead of us already! Must keep repeating — this is not a race; this is not a race ….Thanks to Johnny Smoke of BUSH PILOT BIKING for donating $75.00 towards The Lumpy Memorial PRIME awarded to the first riders to the top of CBC! This was donated to the NSMBA! 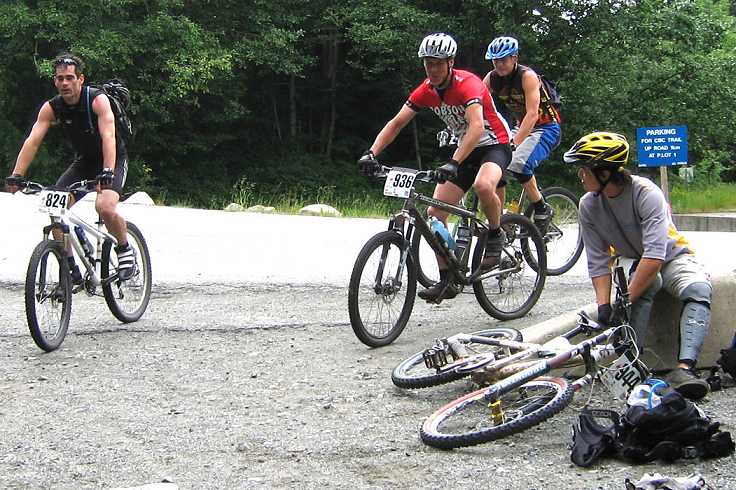 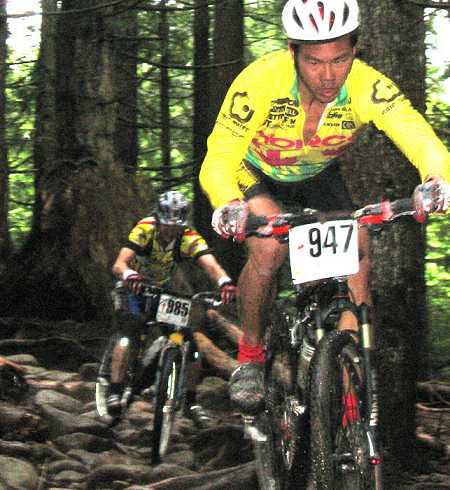 Somehow I manage to clean the Gerbil Cage extension clipped in and stay dry. We’re then off to TNT and down Dirty Diapers, which I see for the first time. Fantastic work from Jacques and crew. Then down Neds and Bottletop and off to Fromme. Peter Campbell is way ahead of us on Fromme and is stoked to gap a chase group of golden retrievers. 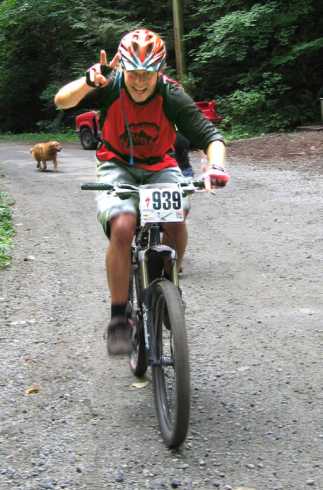 At the Fromme watertowers; we get another card from a checkpoint (James Wilson of Dizzy Cycles is here in the picture) and some welcome food supplied to us by DAVID’ CAFE ON ESPLANADE. Wonderful food supplied by a great guy – thanks Dave! Due to the rather hungry riders we had to get more food that was supplied by Tommy’s and paid for by COVE BIKES! 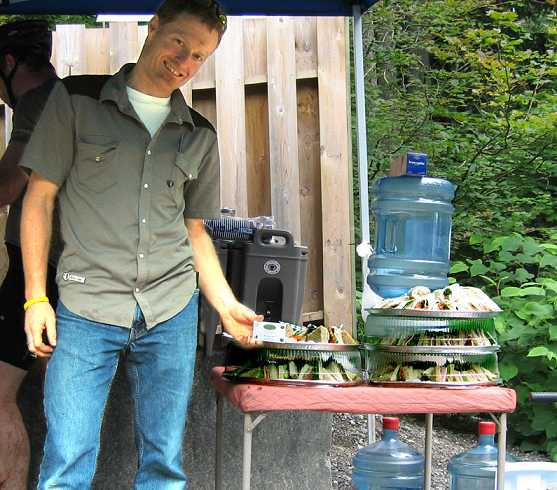 The next checkpoint is at the 6th switchback. Brian and continue on past the obvious trailhead to Executioner so we can bag extra climbing by heading to the Cut ski run on Grouse Mountain. Behind us, unbeknownst, Team Shuttlewhore are still alive! To get an extra card for the poker hand, Franco makes us trackstand. The whores have been hitting the beers hard – lets see how they do! 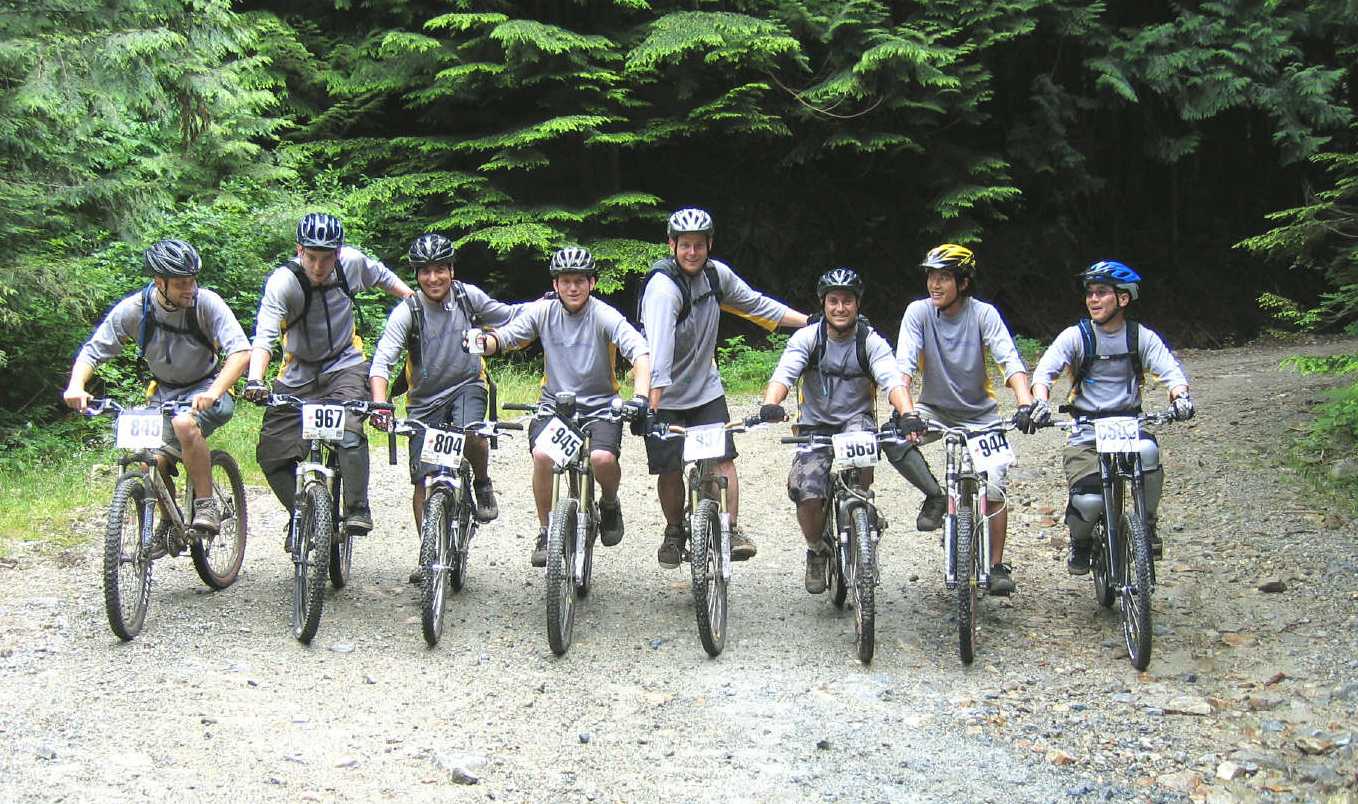 For a bunch of fat slow drunk guys they’re not too dumb …. lean on me! 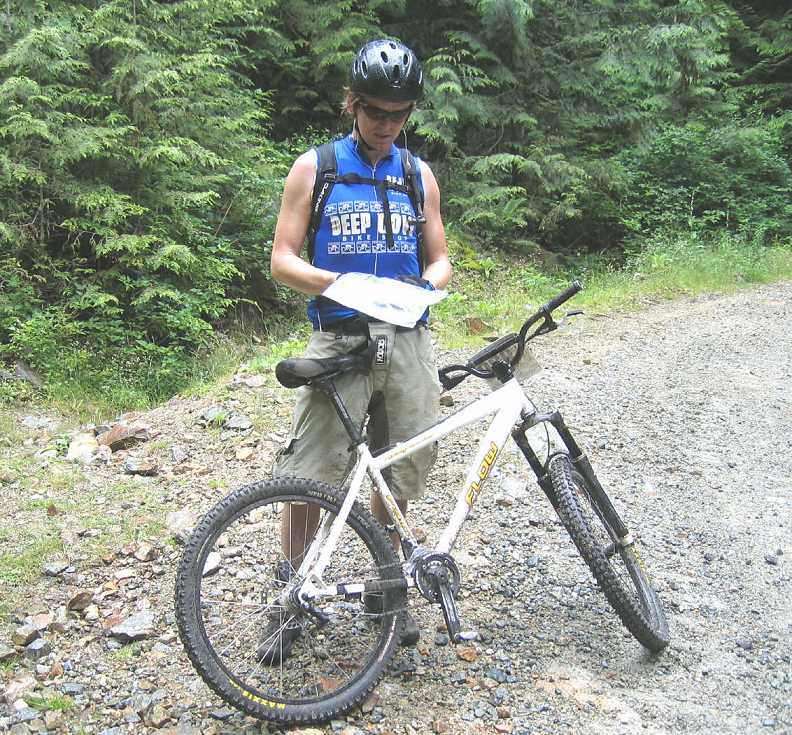 It turns out that Smoke is all too successful in getting nicely lost; check out the rope on this old hiking trail as Vincent Beasse and Smoke make their way down. Vinny – I’ll bet you wish you brought crampons, ax and harness. 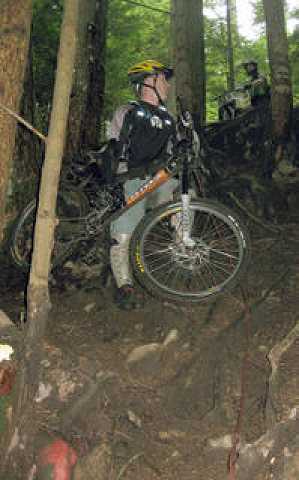 After going up and then down Fromme (or up Fromme and then up Grouse and then down Grouse in our case) its off to the next checkpoint at Cleveland Dam. Here Sharon makes Rob and Stu sing for our extra card. 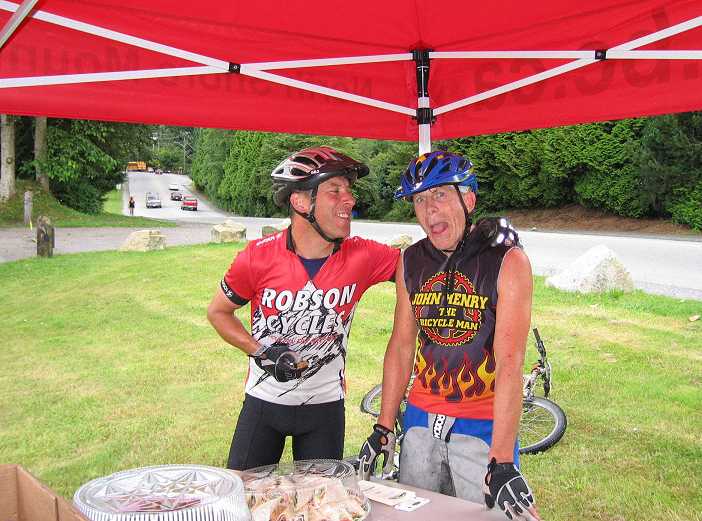 Jim and Rob aren’t too far behind but also seem to be into dancing, 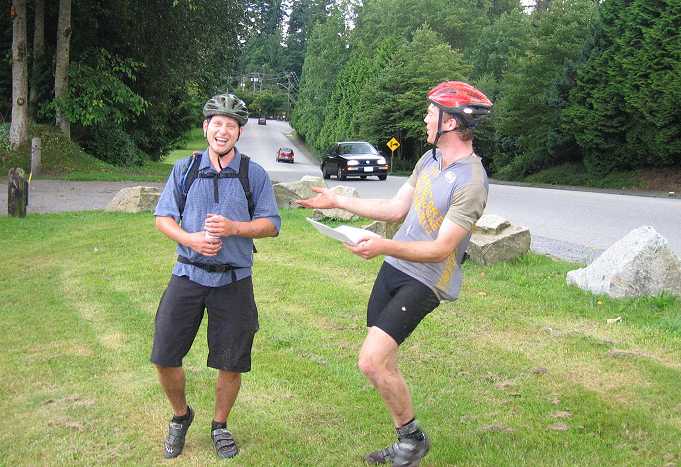 Then its Brian and my turn to belt out Bohemian Rhapsody. 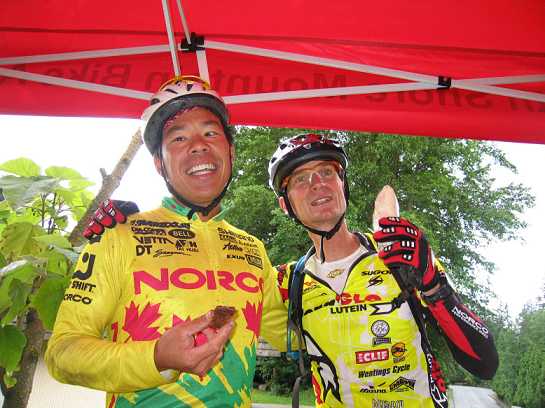 Even the groups which just make the cutoff time (3pm) are in good spirits. Here are Megan, Dave, Penny, Andy and others who I can’t remember belting out a number. 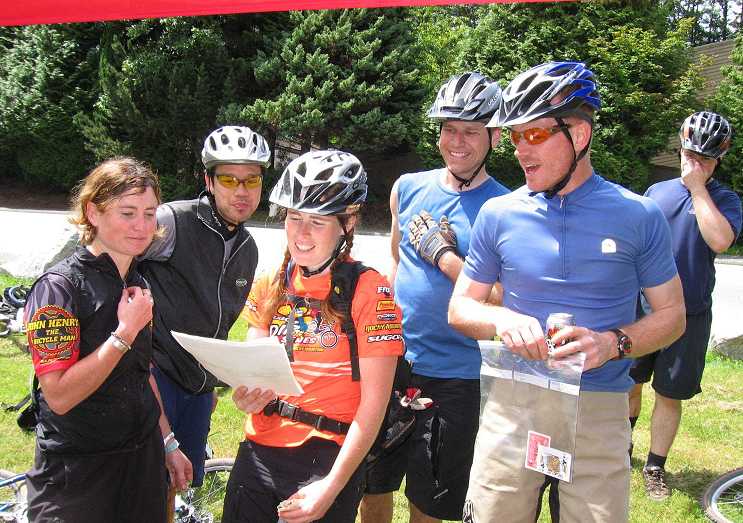 Of course Team Shuttlewhore makes it there in time – not that they needed to bribe Sharon with beer or anything to make cutoff. 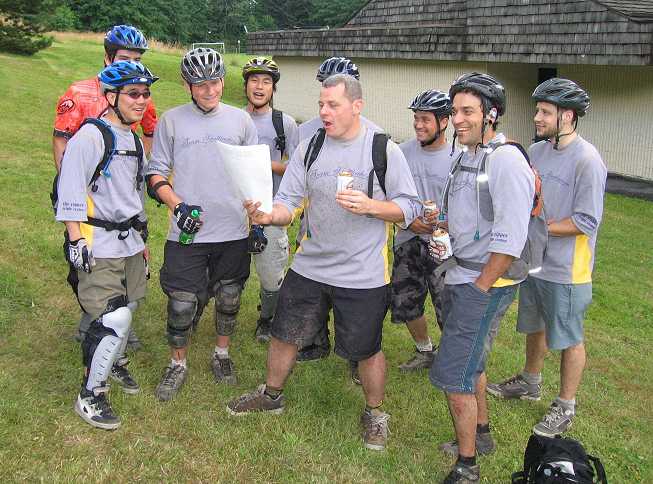 After crossing Cleveland Dam its time to ride through the empty sterile streets of West Vancouver up to Millstream trail and then to the Cypress Bowl Road. For a second I entertained thoughts of taking a convoluted route through Brothers Creek but my legs are starting to die and the trail and road climb is already starting to punish me. Its all I can do to focus on Brian’s rear wheel and weave up the road to the Blind Skier parking lot. As we climb up, JF passes us going down the other way on Millstream trail. So does Peter Campbell on the Cypress Bowl road.

At the Blind Skier parking lot, Christy tells us that you have to reverse your jersey and shorts to get your extra card. Some guy I can’t recognize, Steve and Stu will do anything for a bonus. 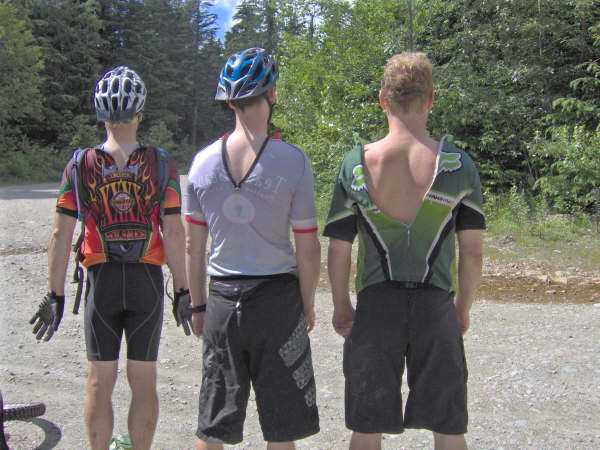 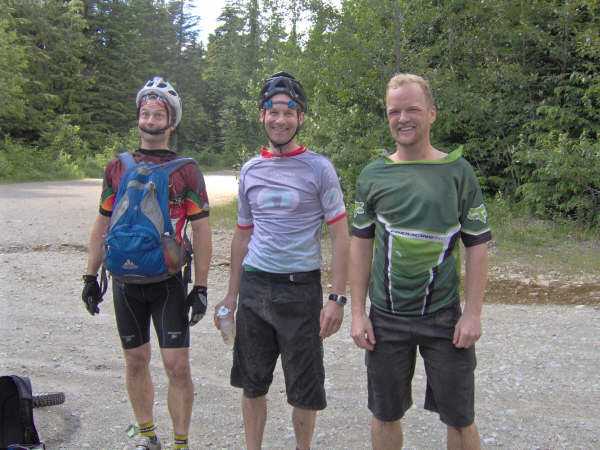 Rob and Jim evidently will also do anything for a card. 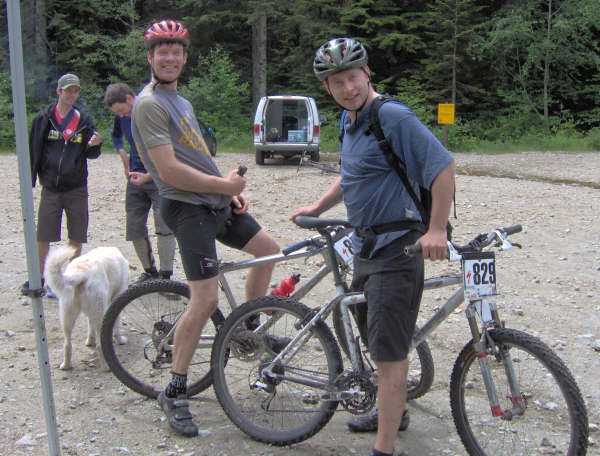 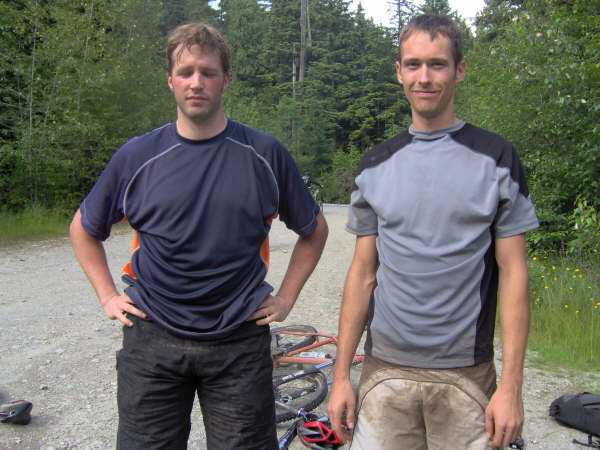 The Shuttlewhores are not the first group to get to Cypress but they certainly have the most style and the best tailgate parties. Big hand to these guys for their celebration of the fun of riding bikes on trails. 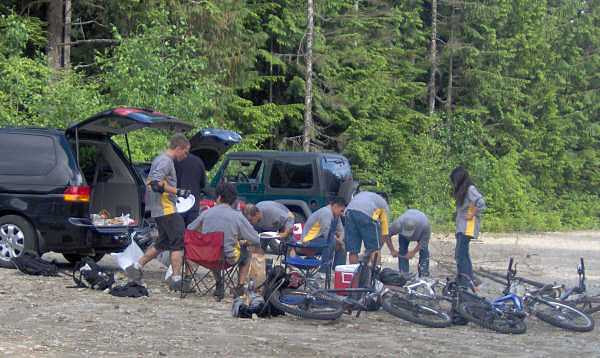 While the Shuttlewhores have their party, the apres – poker ride rages on at Raglans on Lower Lonsdale. Visit them for great eats and drinks too! 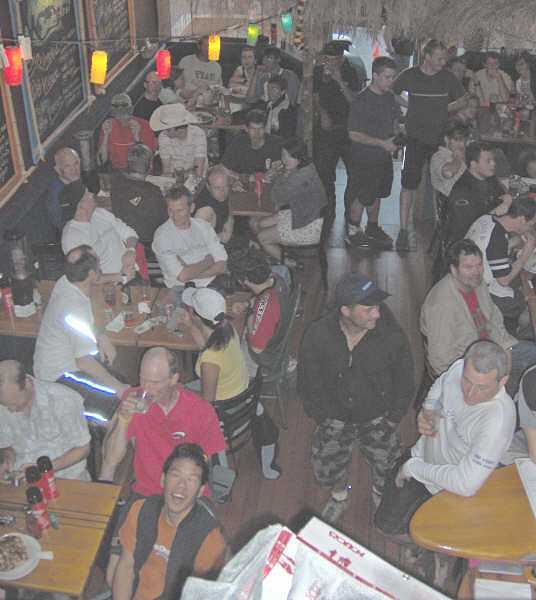 James gets the appreciation fruity drink. 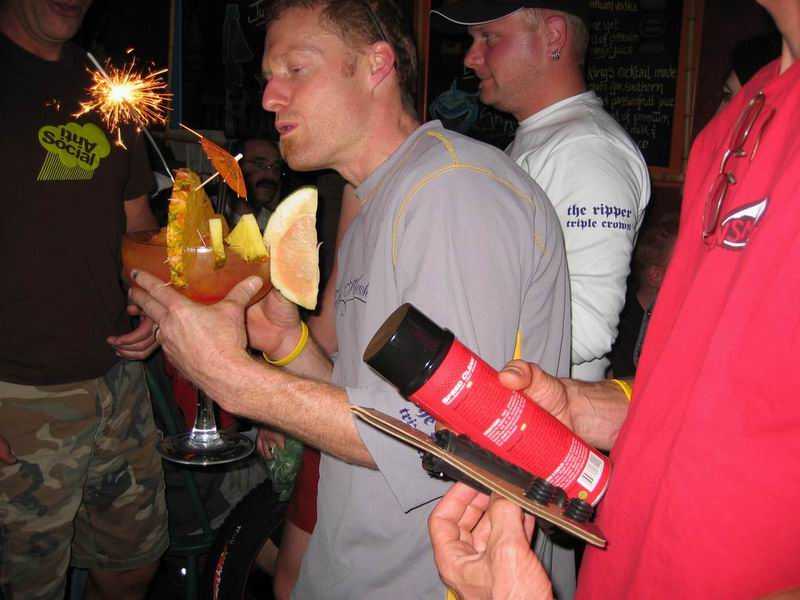 Here’s a graph from a Polar heart rate monitor about this ride. Some notes to the below graph: Altitude is off by minus 40m as I forgot to calibrate the bike computer. Prospect Road is mislabelled as “Panorama Drive”. All I can say is that I’ve been riding for a long time and this is the most fun I’ve had on a bike.

Other Select Stories from Riders on the Triple Crown: