In mid-summer we had biked up to Paul Ridge in Garibaldi Parkto Elfin Lakes. With some nice weather up high it seemed like a good day to play hooky and go ski. 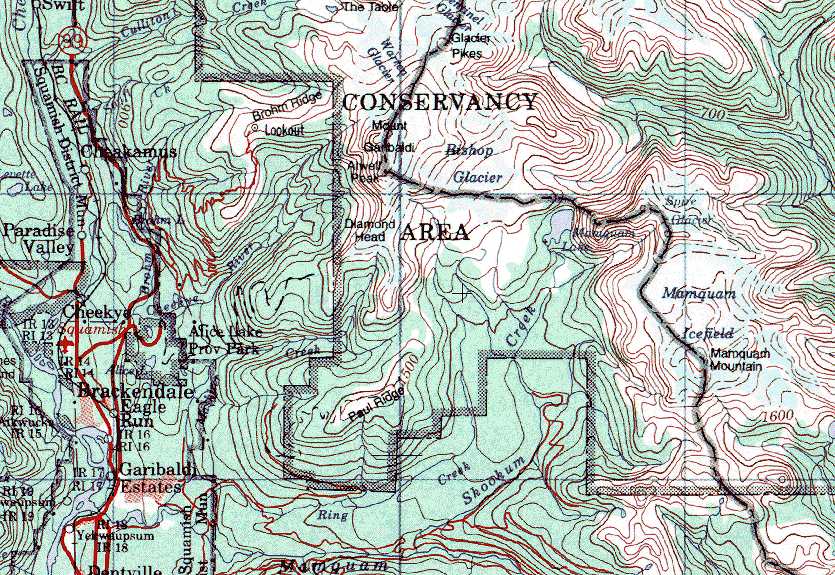 Paul Ridge is close to Squamish which itself is only 45 minutes drive from North Van. So after an hour of driving and some fresh sausage and bacon eggers we’re at the parking lot. 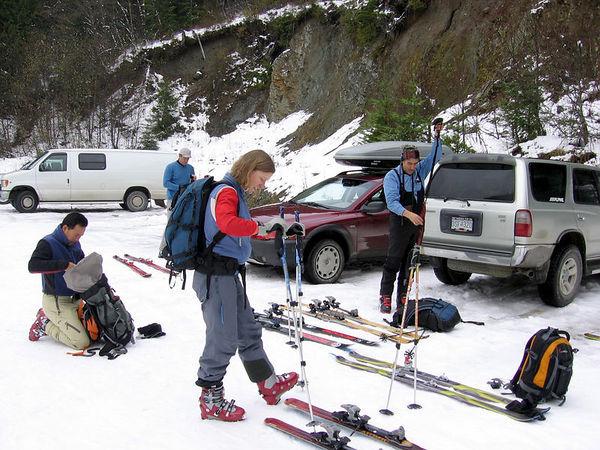 Coverage is pretty good. Today you can drive to the parking lot without chains yet you can also ski right from the lot. It’s cloudy when we start at about 1100m but at about 1400 m we break into the sun. The snow gets a little drier as we get higher. The Red Heather roof snow-creep shows that its been warm lately. Not too many people around today but we do run into some people on XC skis and snowshoes. As we climb from Red Heather up the winter route, the views start getting magical. There’s the Tantalus Range to picture left to the west across the Squamish- Elaho river with Cheekye Creek in picture middle and then Mt Garibaldi to picture right.

Frank ascending with Columnar Peak in the background and the icefields around the Garibaldi Neve farther in background. 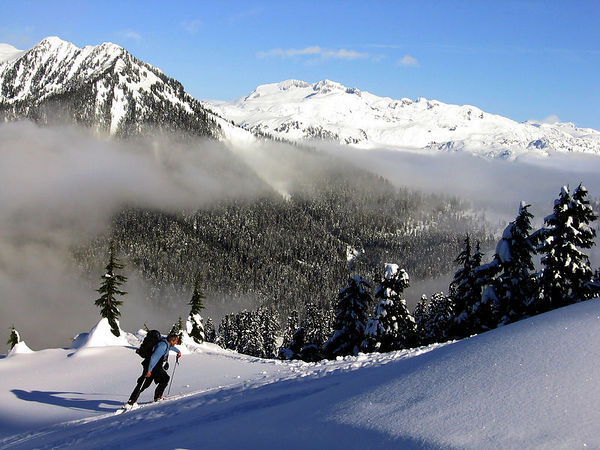 Sharon also plodding up the slope. 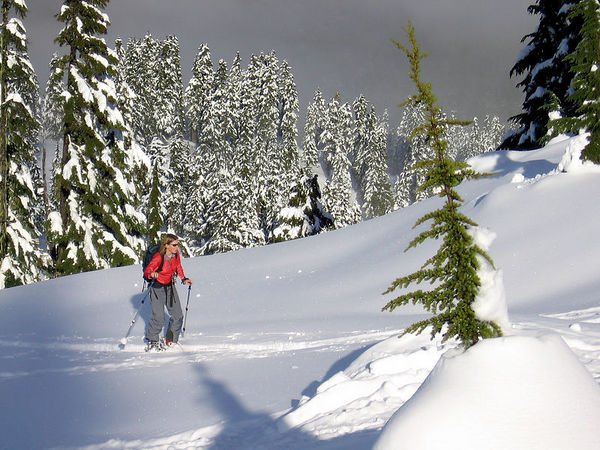 Mike, Ron and Sharon enjoy the view as we scope out the bowl into which we will ski.

Frank is an engineer who consults in slope stability (eg. avalanche and landslides). Alan is a former director of the CAA. Probably more then 60 years of avalanche assessment experience stands on that ridge. Unfortunately the snowpack is so bomber today that there’s really not a whole lot to see even after we dig a full test-pit.

Here’s a map of the slopes we ski. There’s been no new snow since the weekend and due to proximity to Vancouver and Squamish these slopes get heavily powder farmed and not by the most elegant skiers. Still there’s powder to be had. 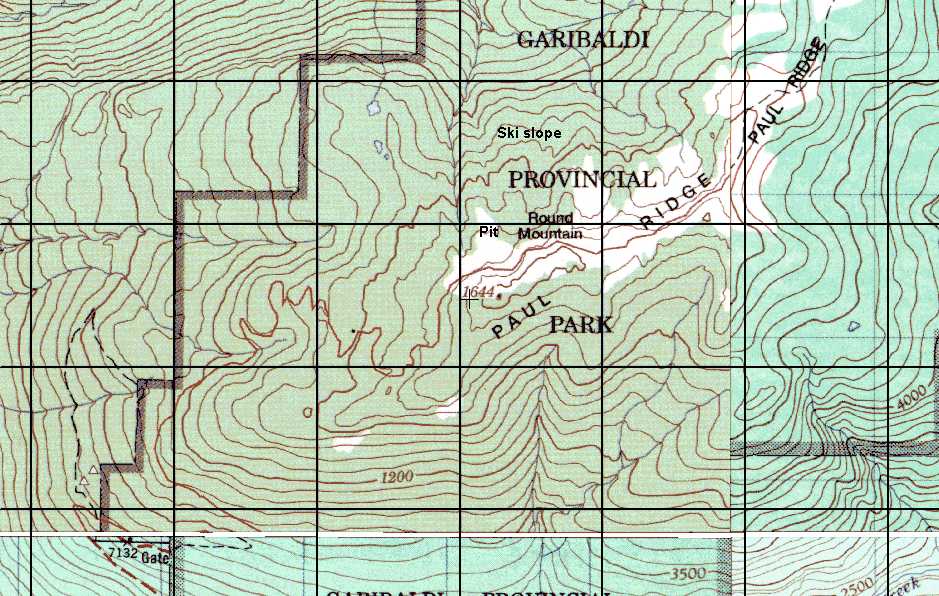 The first run we do drops us about 300m. Dropping off the second bench to about 1350m is a mistake – we lose the light as you descend into fog and snow quality goes to pot. Still Ron manages to make some turns. 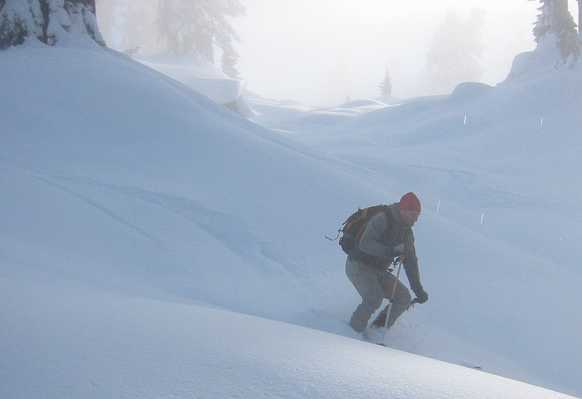 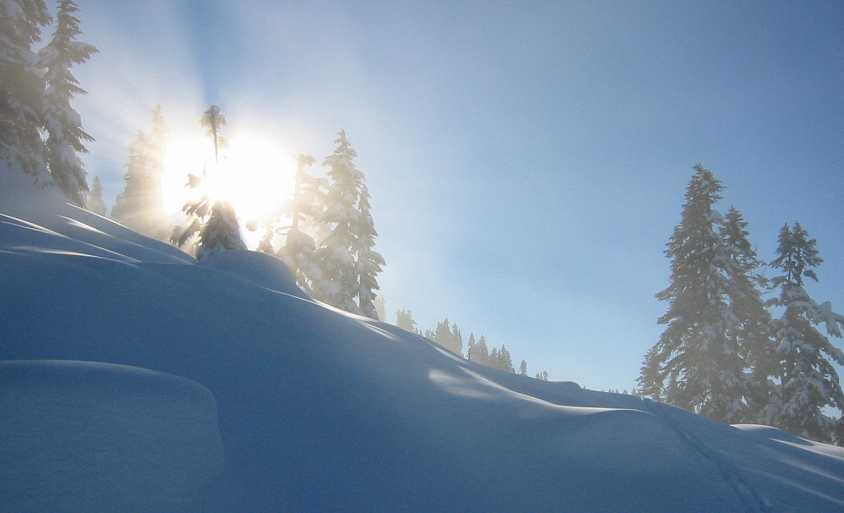 We find another slope to ski off the Paul Ridge ridge top line. Here comes Alan. 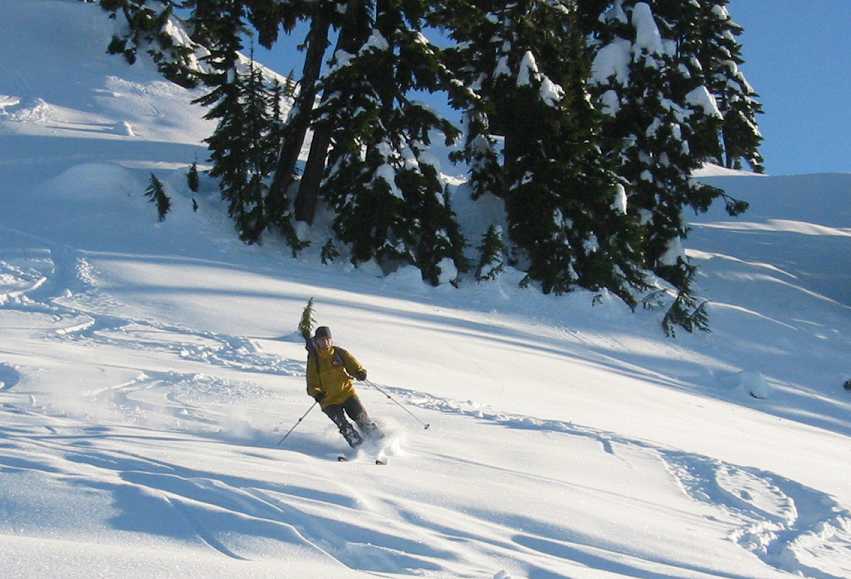 Sharon takes a shot at the entry chute into the slope. Ron on the same slope Ron takes some nice pictures of me as I drop in. The Goodes I am skiing on really like big fast turns. Mike is the lone telemarker in the bunch. After another run, we’re back down to the cars via the luge run of the approach and in less then half an hour, we’re feeding on nachos and beer at the Shady Tree. Not an epic but still nice. It never did get sunny in Squamish that day.

This entry was posted in 2005, ski and tagged elfin lakes, Paul Ridge. Bookmark the permalink.