Rainbow Mountain (2314m) is a peak just west of Whistler with an attractive glacier. It can be climbed fairly easily on skis, by foot and in summer, with bikes. The lower flanks of Rainbow are sled-accessible. To put it mildly, Rainbow is not exactly isolated.

Commercial operators actually run heli-biking trips off Rainbow in summer. While Rainbow can be climbed from valley bottom on skis (I had tried unsuccessfully last year via the TwentyOne Mile drainage), it can be a bit of a slog if snow in the Whistler valley floor is in poor condition. I had heard that Rainbow could also be heli-dropped in winter.

When Jeremy, a friend of ours, expressed interest in organizing a group for a heli-drop, I couldn’t resist and started gathering information and making plans. 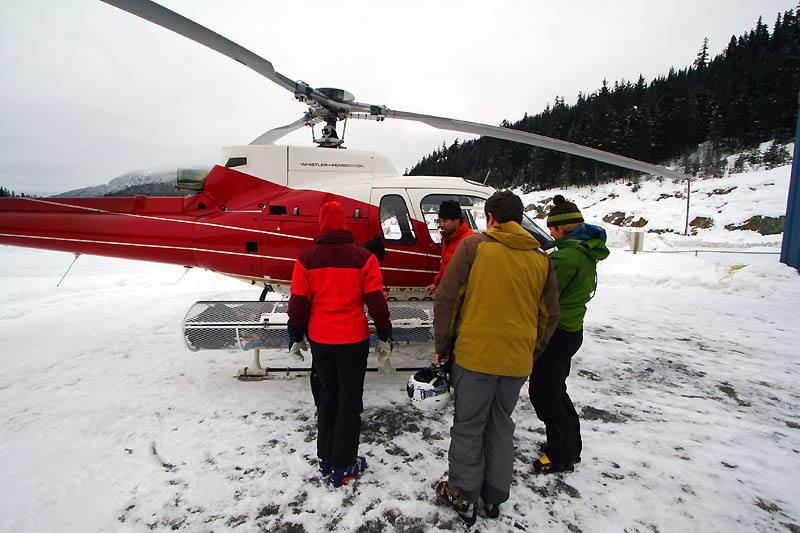 The group getting the helicopter safety briefing from Greg

Pretty consistent snowfalls in Whistler over the early part of the season had made it hard to find weather windows to tour high in the alpine. A persistent weak layer in the snowpack resulting in several large avalanches in the vicinity of the resort had also complicated high-alpine travel. When a fat high-pressure system finally developed over the Coast Mountains we realized that now was the time to do the heli-drop. The improving snow stability picture and anticipated good visibility meant that this heli-drop was on.

Views of Wedge, then of the resort poking through the inversion layer

Rainbow Mountain atop the inversion layer

We had reserved Blackcomb Helicopters mid-week. Unfortunately a temperature inversion had set in for Thursday morning when we were set to fly. However, our pilot was cautiously optimistic that the weather would improve; his confidence was borne out when a nice size weather window developed. Greg flew us over our planned exit via 19th Mile Creek, over the E face approach giving us a look at the NE face glacier descent route. A massive pile of avalanche debris from a sizeable slide that looked cornice triggered, made it easy for us to make a decision to NOT ski the E face. 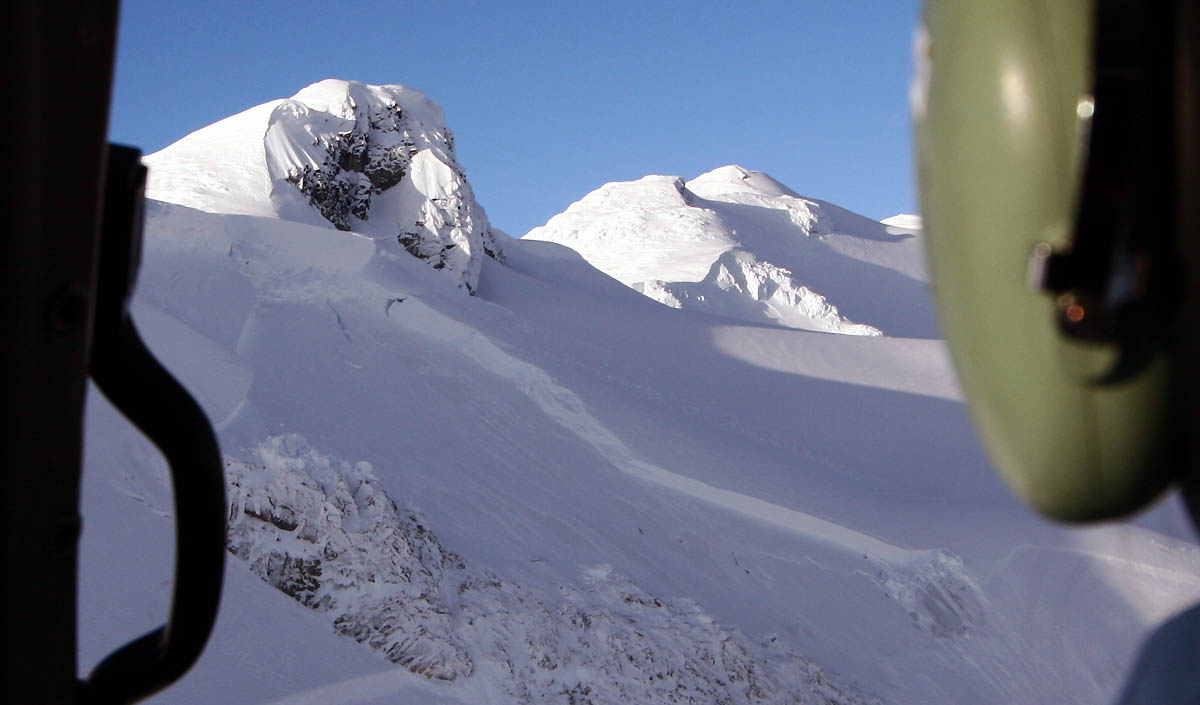 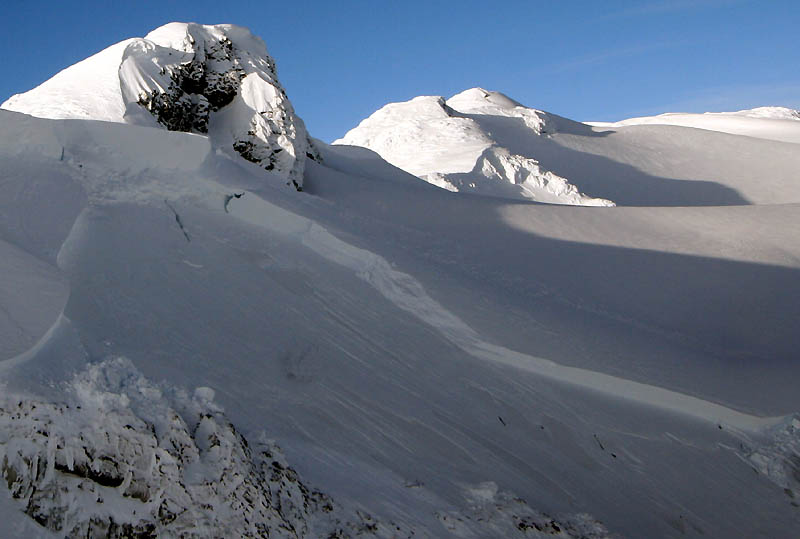 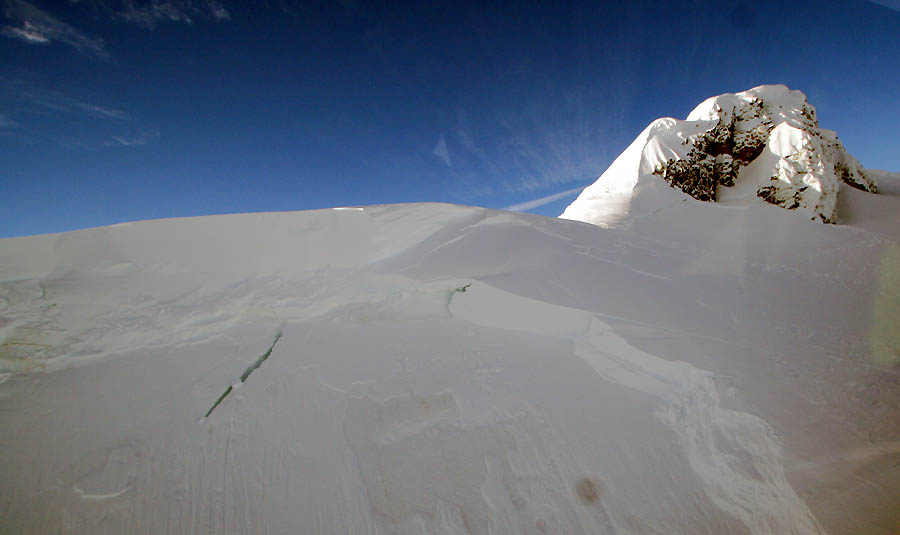 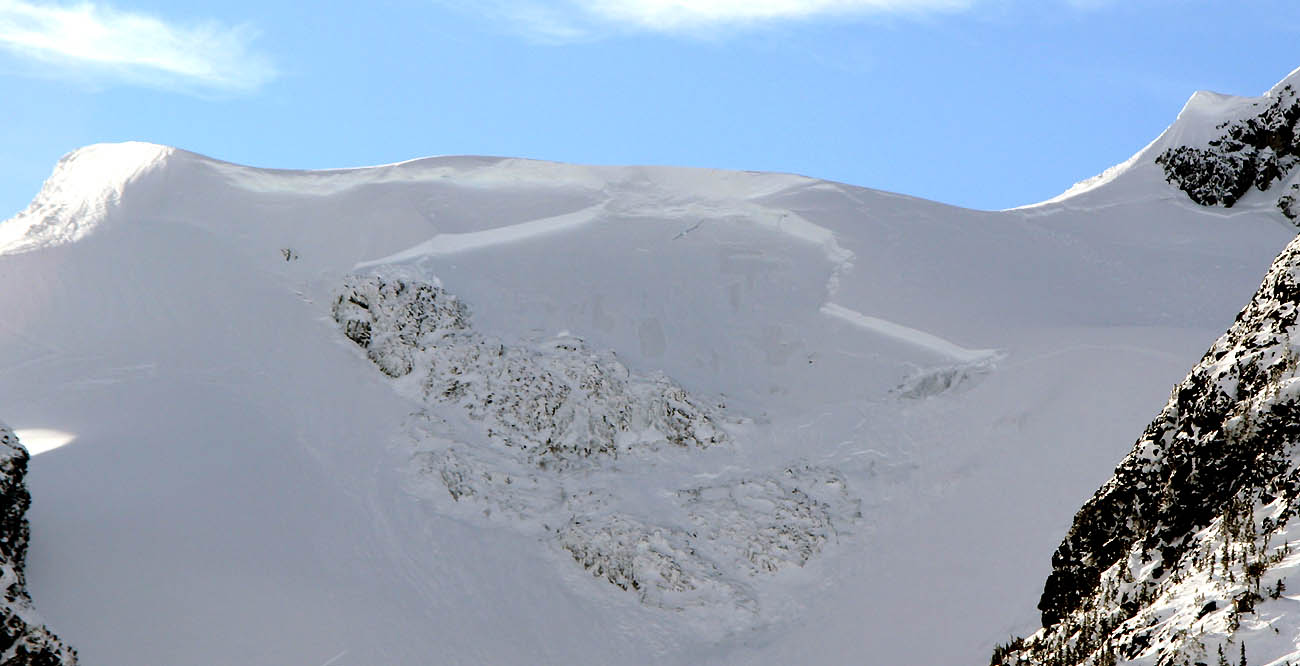 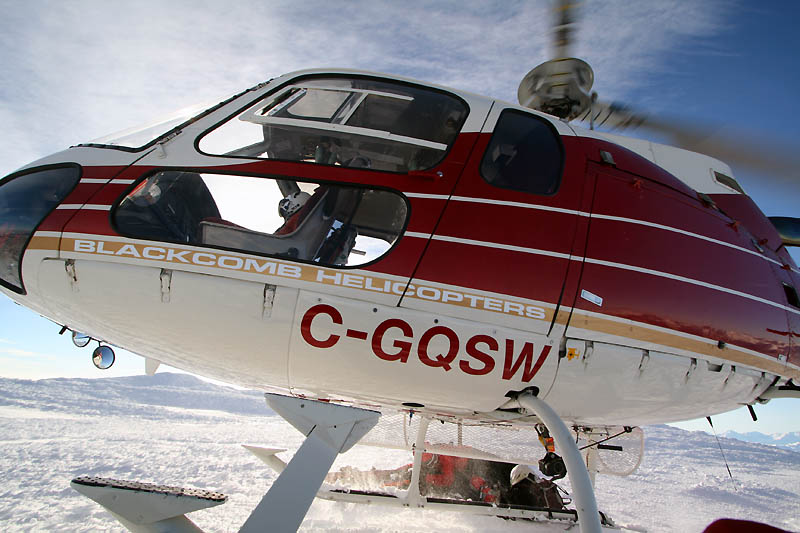 The heli-drop is one-way. Make sure you have all your gear before they leave.

The heli-drop is one-way. Blackcomb Helicopters operates merely as a taxi-service and offers no route-finding or guiding services. It is possible to line up a guide separately for this trip if you feel that you need one (use the links I provided above or contact the ACMG).

Despite my earlier comment that Rainbow is “not isolated” bear in mind that search and rescue response in support of an accident or injury would probably take some time. Note also that cell phone coverage from the peak of Rainbow is patchy at best and you not rely on getting and maintaining coverage. Even though Rainbow is deceptively close to the resort, the descent route is glaciated and the way off the peak via the standard NE route descent is hardly a no-brainer.

Rime coats the summit ridge. This view looks SW from the summit towards the Squamish-Cheakamus divide

Looking back from whence we came – from L to R: Ryan W, Jeremy R, Kerri G, Sharon B. 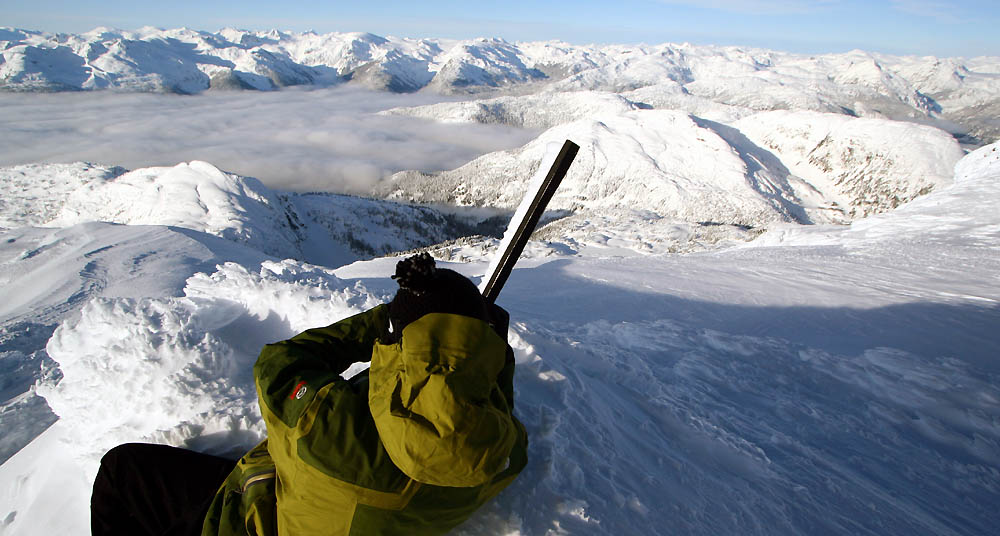 View looking down from the summit to Gin and Tonics Lakes. Sleds had tracked out the S bowls and wind had blasted whatever snow was left. We elected to head North.

View of the Armchair Glacier and the Wedge Group from Rainbow.

It’s always a treat to spend quality time in the alpine. The views were magnificent of course but so were the conditions. Due to the inversion, winds were very light and temperatures mild. The last significant weather event had been a typical wet coastal storm with high SE winds depositing snow that had then turned to wind-slab on some aspects and elevation. We looked down south to the windward slopes but decided to pass on skiing rimed boilerplate. Instead we elected to ski off the peak down via the NE glacier. 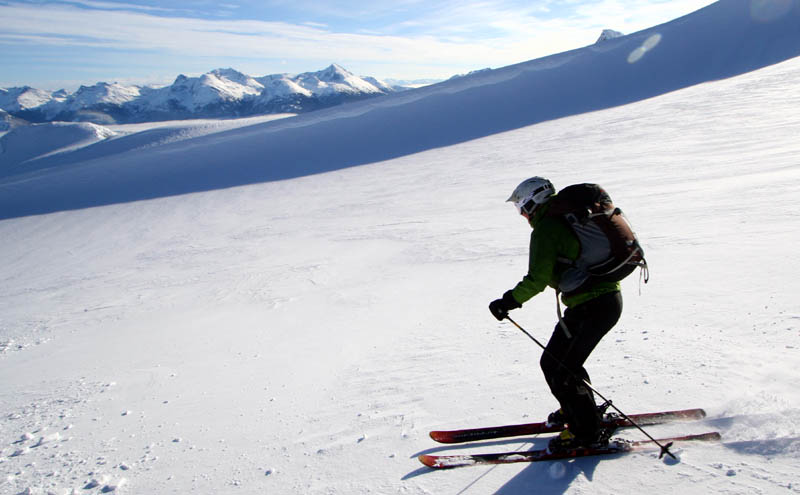 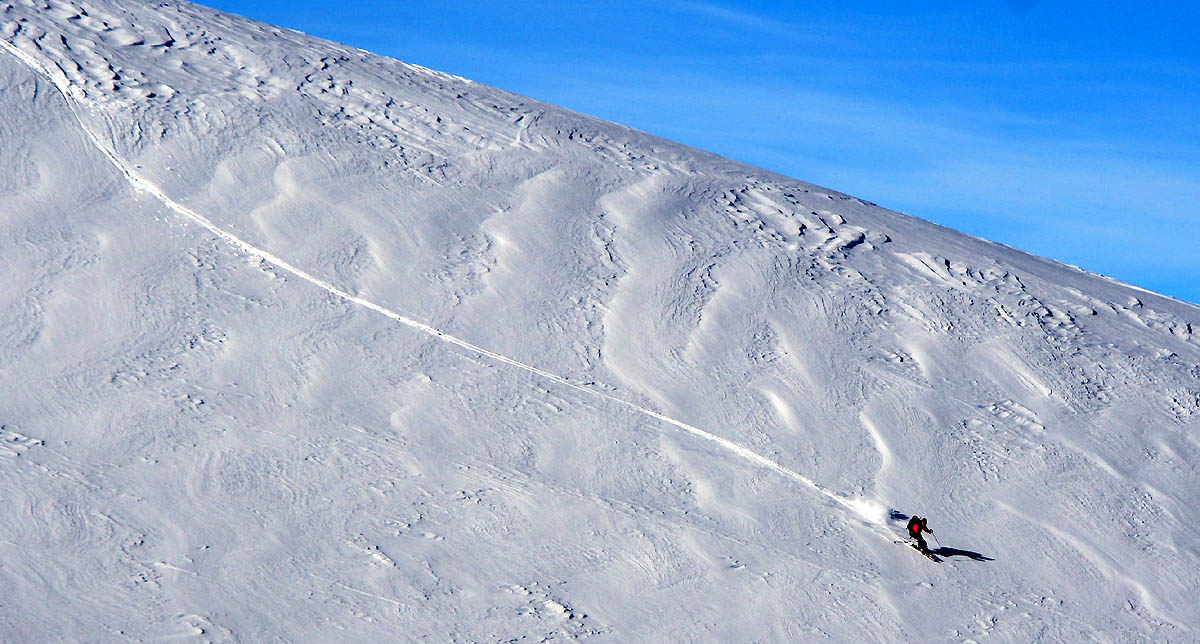 Ryan, Jeremy, Kerri and Sharon all found some decent bits of boot-top powder on the top parts of the North Glacier.

Surprisingly the strong SE winds from the storm earlier in the week had left us with some snow on the higher elevations of the Rainbow Glacier. Unfortunately as we got a bit lower on the glacier, windslab made our lines a bit more tricky – the only fortunate thing being that the slab was supportive so that snow conditions were firm rather then variable. Route finding off the NE glacier was not difficult; it was nice to have had the opportunity to view the face from the helicopter before we dropped in. 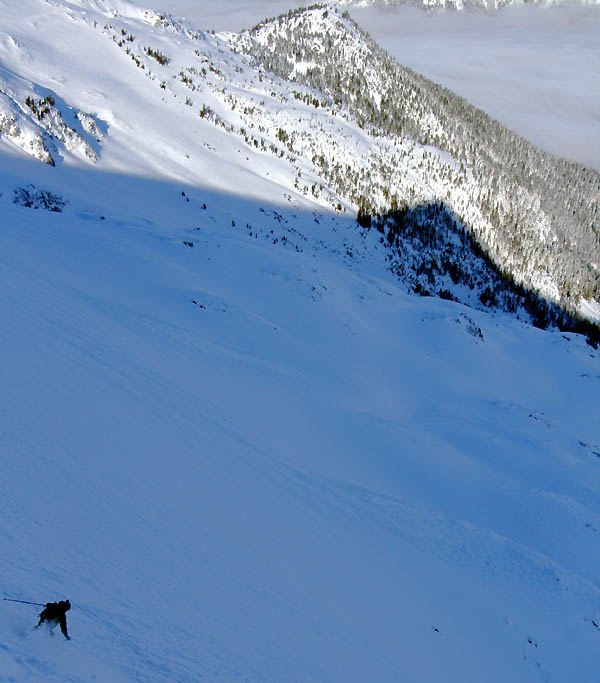 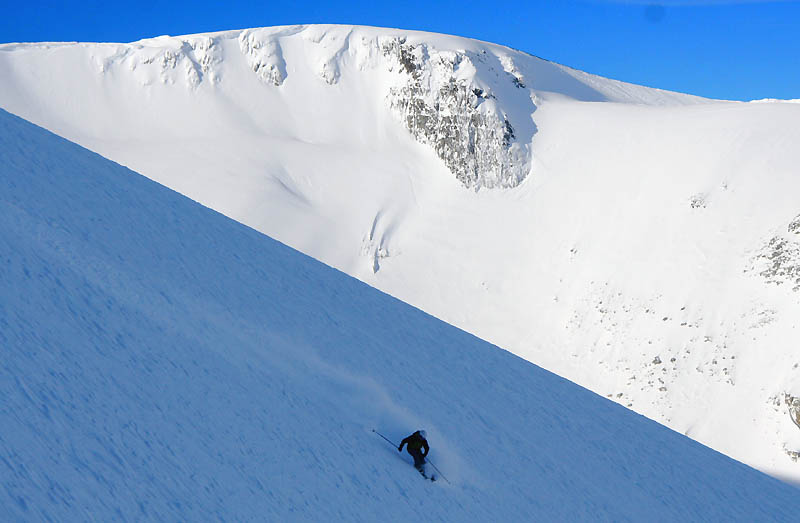 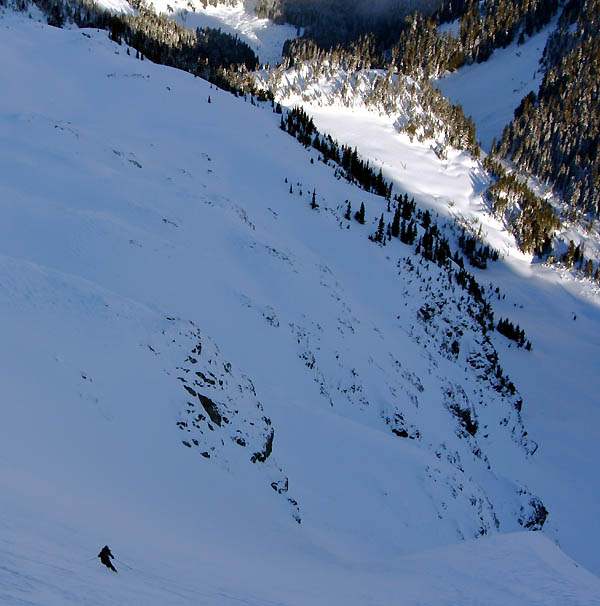 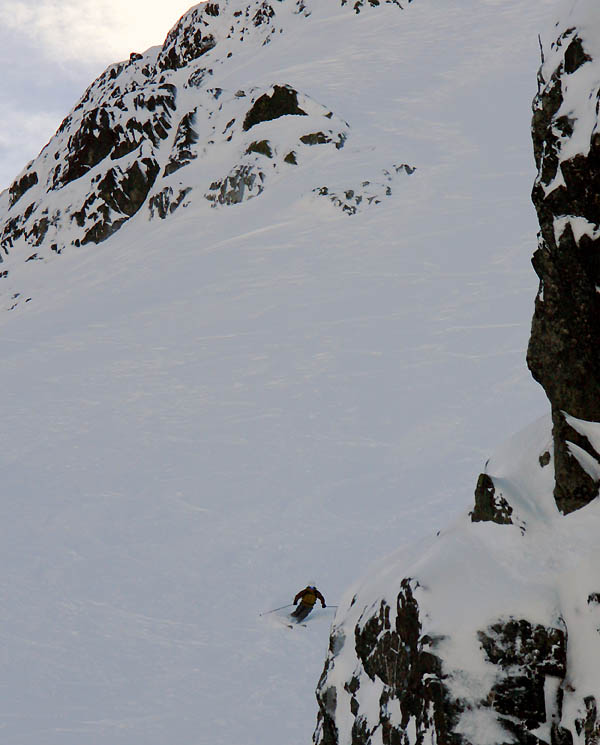 As we descended the lower parts of the NE glacier, the slope steepened and the snow became slabby.

Determined to make a ski day out of it we dropped down to a bowl at about 1600m bordered by a ridge that looked like it offered good snow hopefully protected from wind-effect. This turned out to be such a good call that we did a couple of laps before leaving. It’s a beautiful protected little bowl with 200 – 250m shots on 35 degree slopes.

Runs are wide enough that our medium-sized group didn’t come close to tracking out the slopes. Due to the inversion, temps at this elevation were a bit colder then up top in the alpine keeping the snow reasonably light. 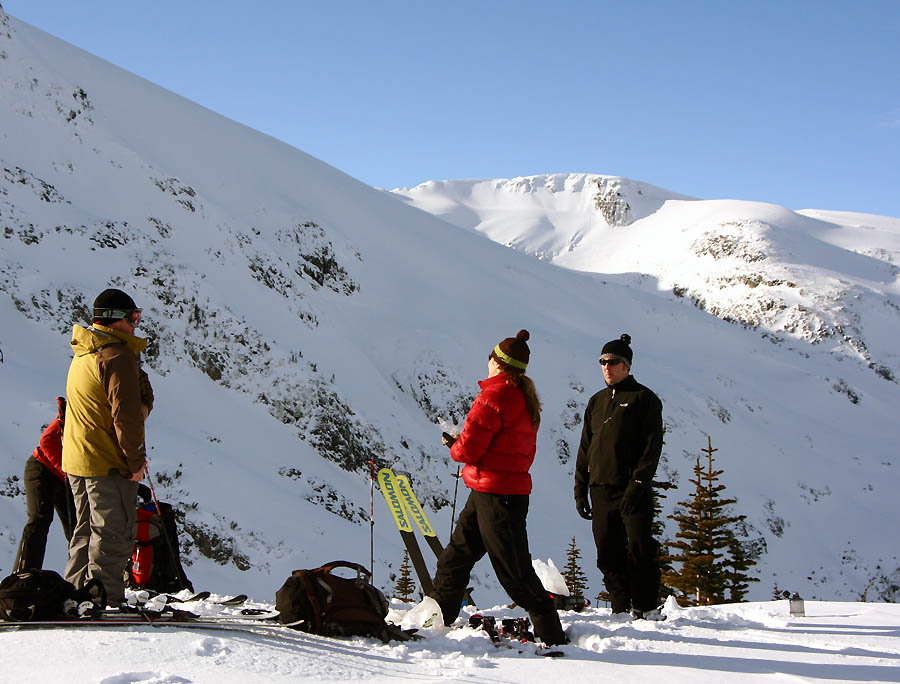 We cruised into the bowl to the unnamed lake N of Rainbow and found some NW facing slopes that promised good skiing. Here’s the group on the ridge above the bowl taking in the view. 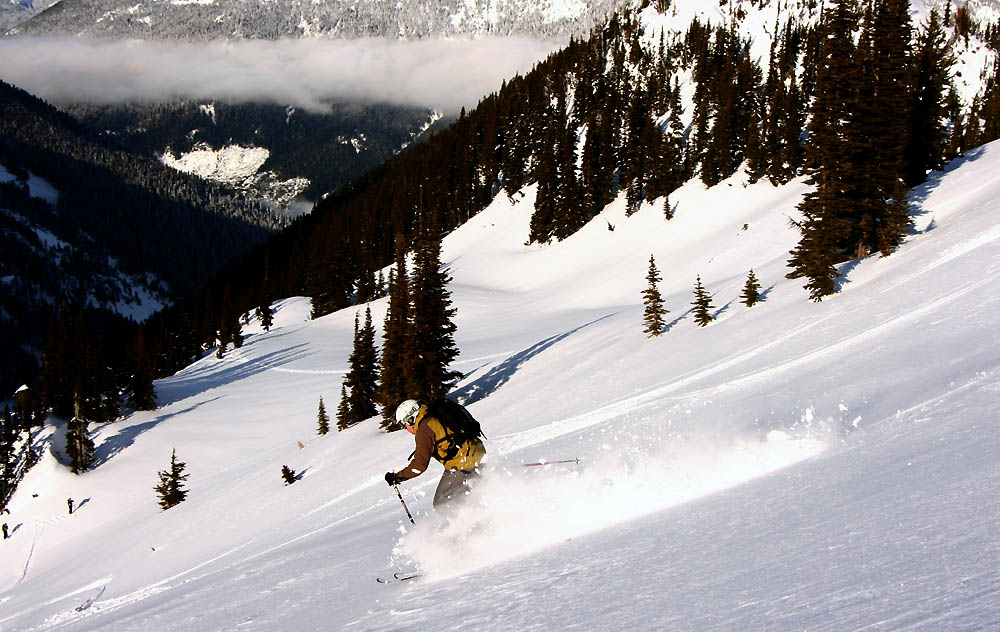 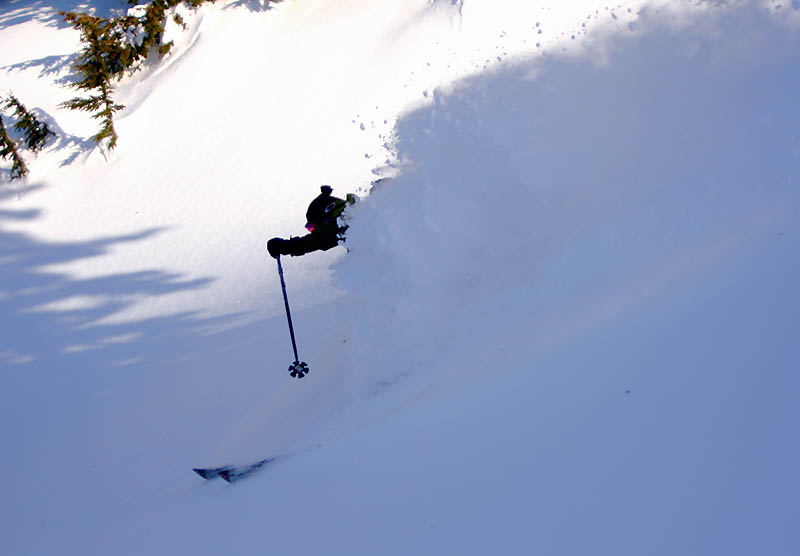 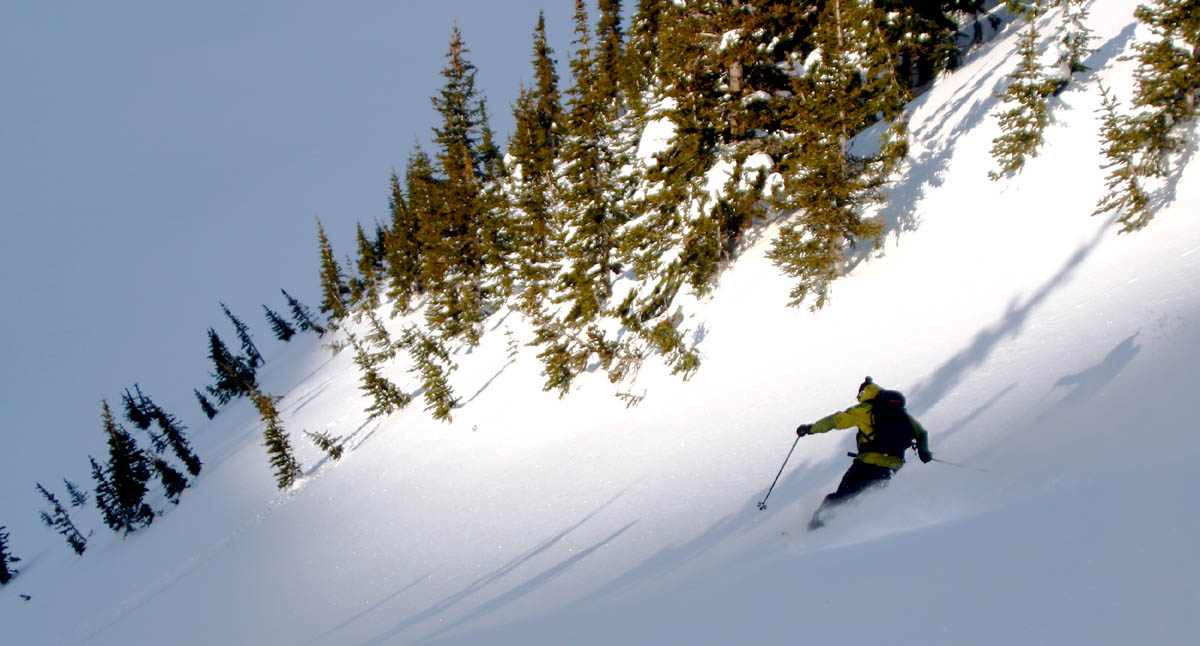 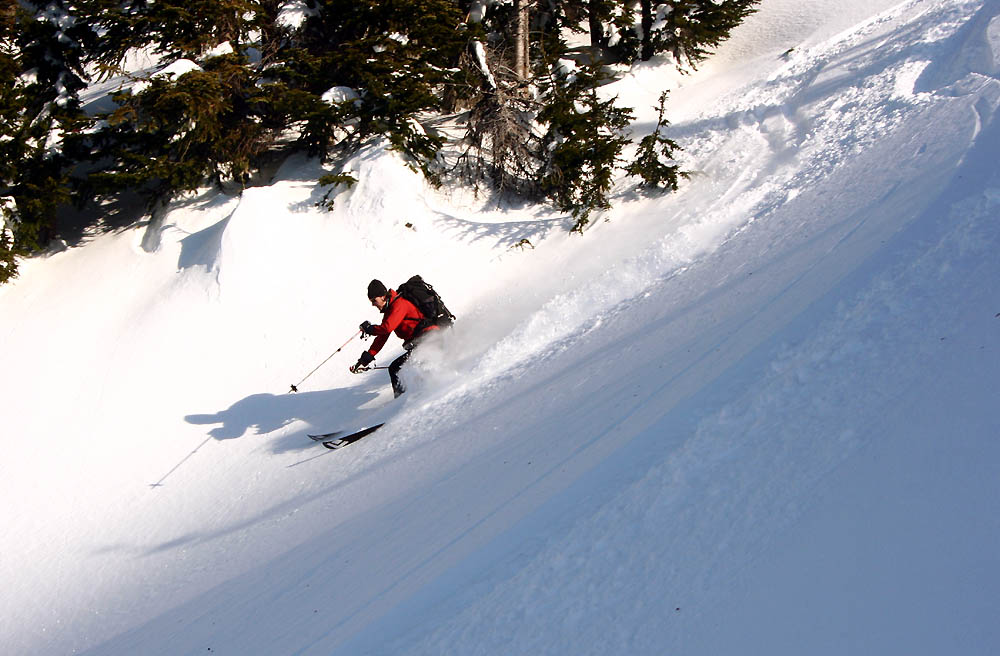 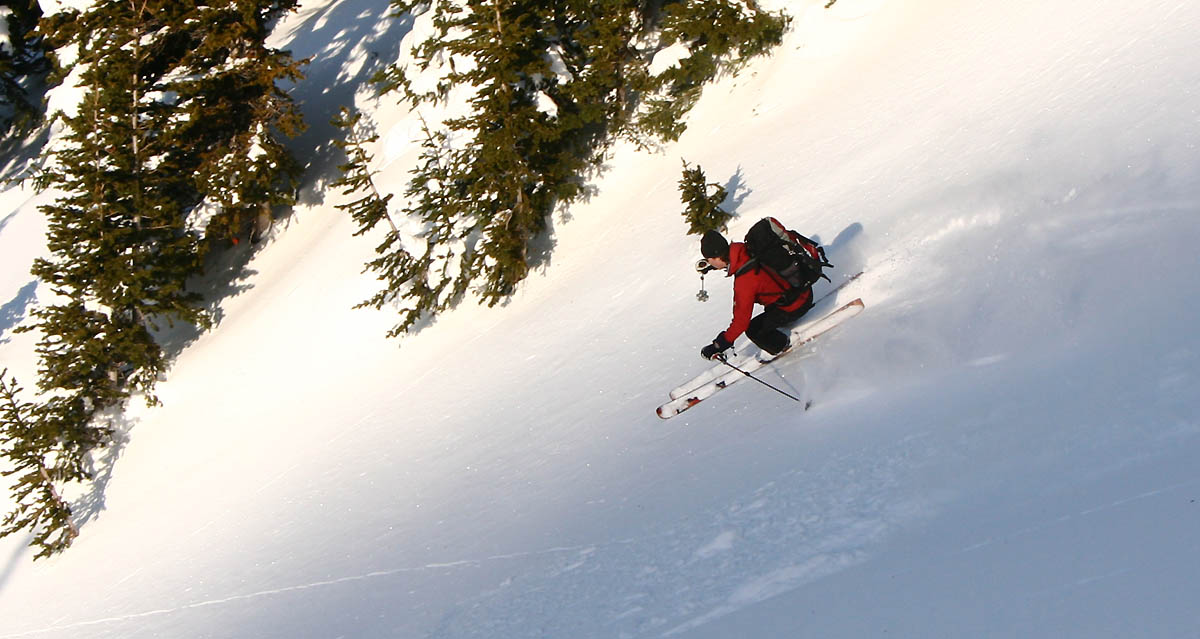 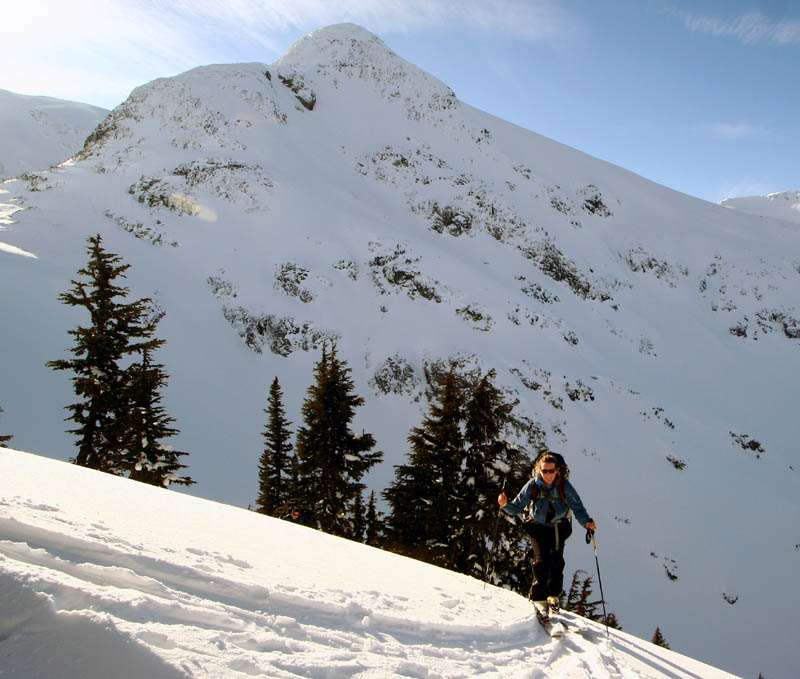 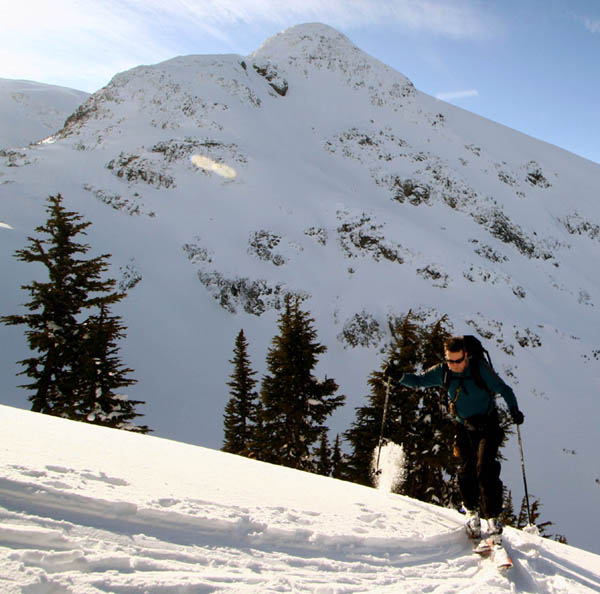 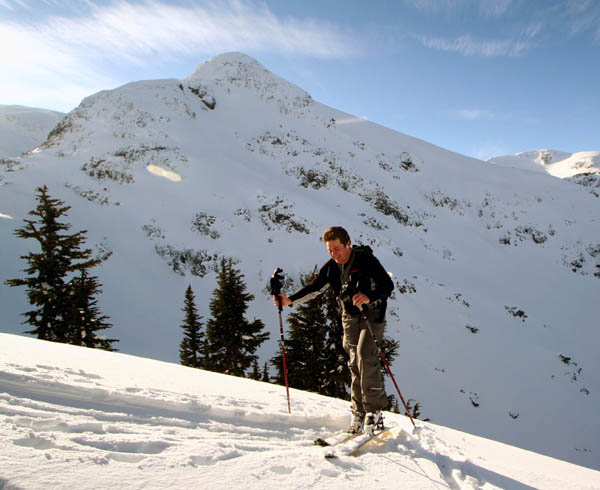 Good enough for a second lap. Unnamed peaklet N of Rainbow Mountain proper and the N glacier is in the background

Nice angle approach to the top of the bowl which we skied. The other side of the bowl (on the NE side) was tracked out by sleds. 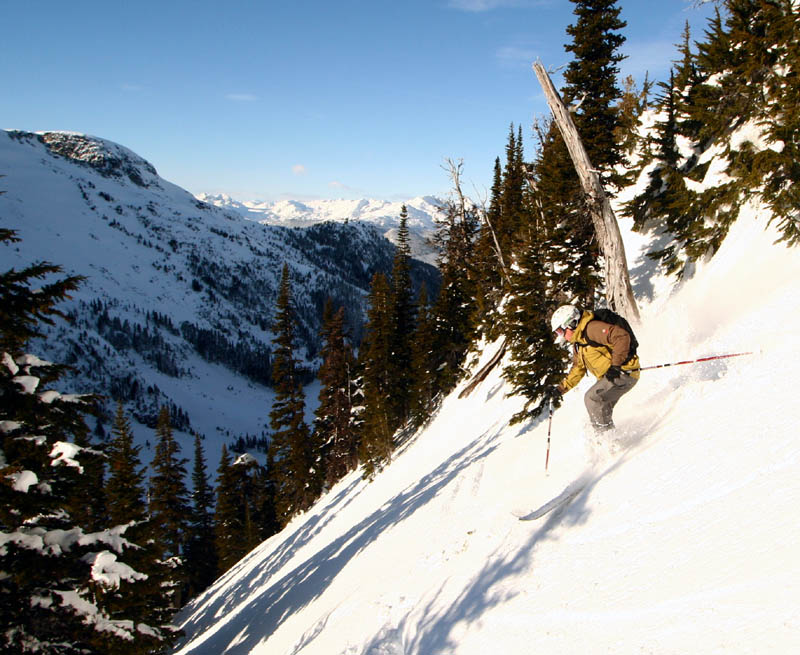 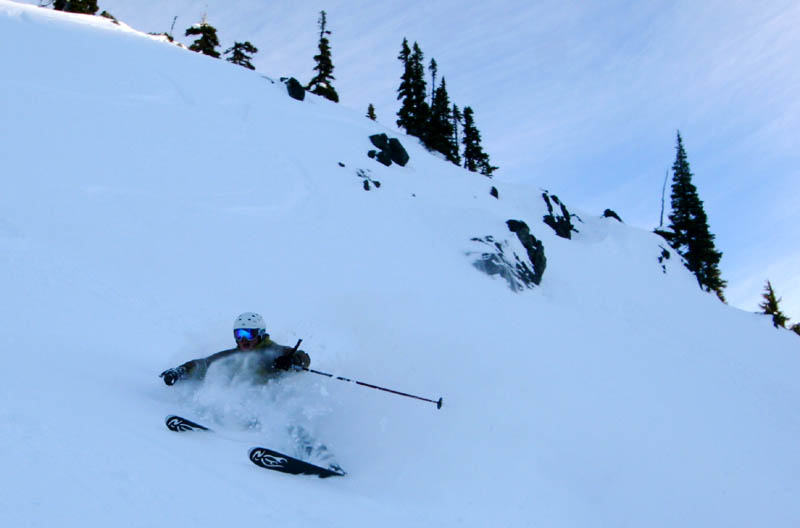 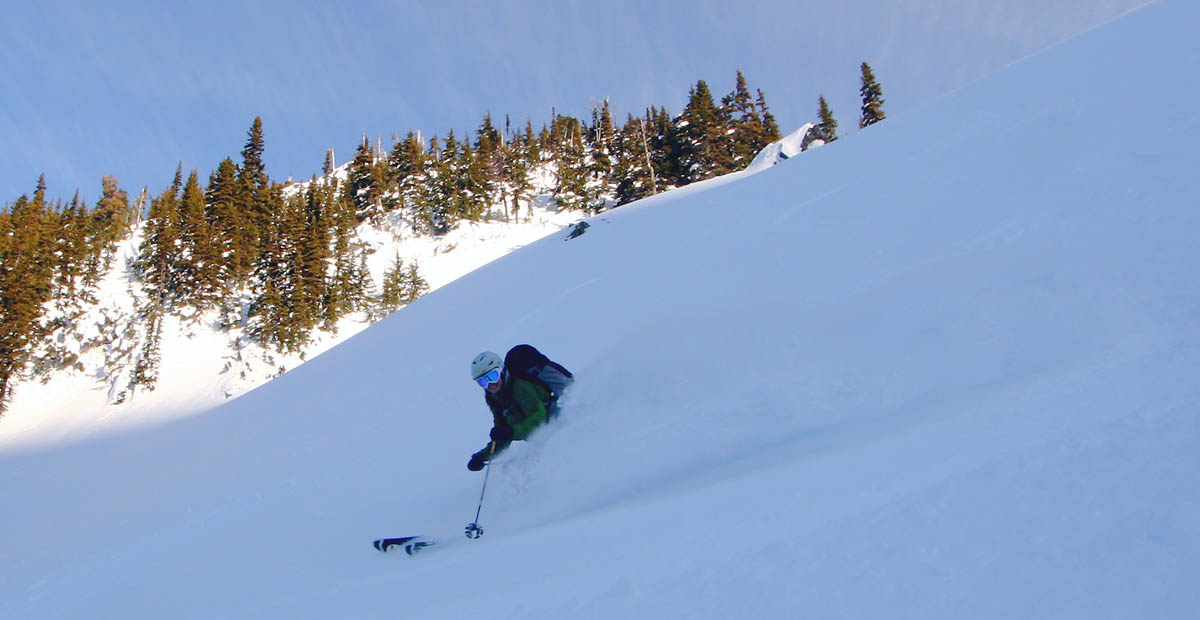 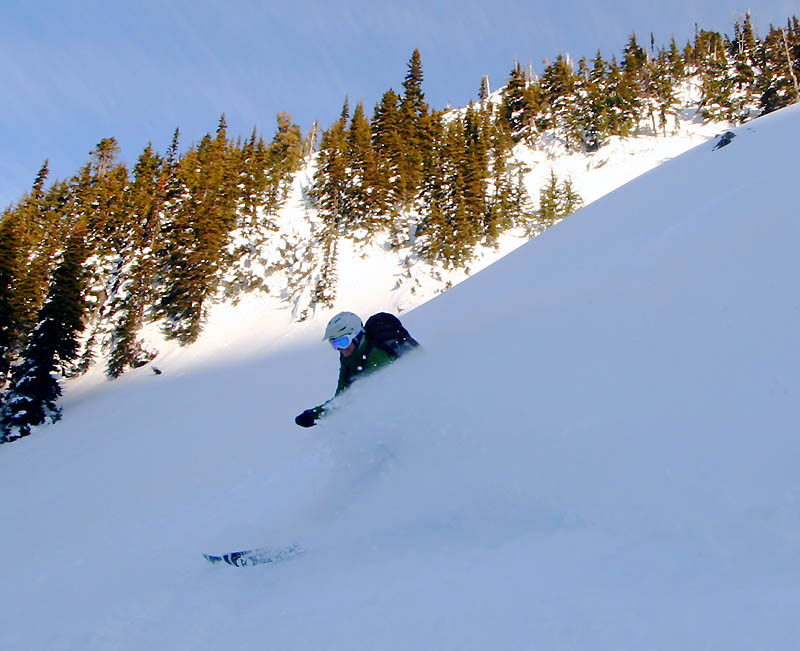 The exit from the Rainbow area itself is not complicated. Basically we took a SE course following the 19 Mile Creek drainage keeping an eye on the altimeter until we intersected the Flank Trail system at about 1100m. The creek walls are not steep and there are no significant cliff-bands to avoid. Trees are also nicely spaced and if snow quality is good (as it was for us) the tree-skiing is actually quite a treat.

The only tip I might give you is that the descent flattens out as you approach the Flank Trail. At about 1150m elevation or so, put on your skins to make it easier to cross the flat section to then gain the Flank Trail. The rest of the ski – out back to Alpine Meadows is trivial if a little tedious and alder-ridden.

Skiing out involves an exit through nicely spaced trees in the 19 Mile drainage. This is the flatter portion right before you hit the Flank Trail exit to the Alpine Meadows subdivision.

Elevation profile for the trip 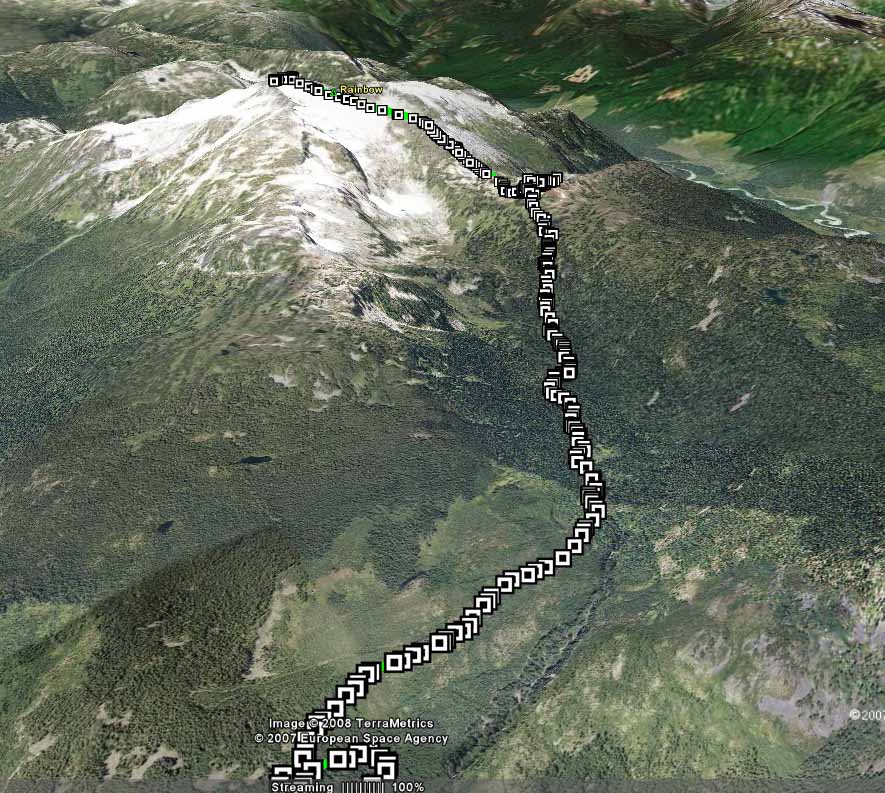 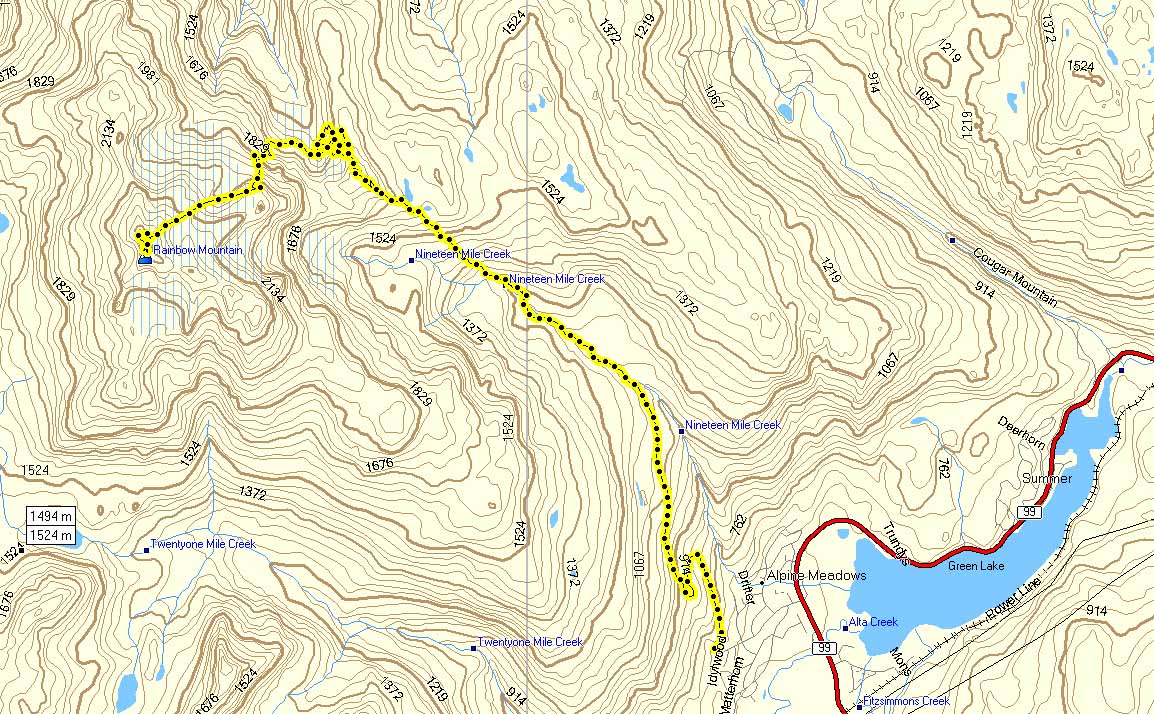 Map of the descent.

This is a shot of unnamed peak just N of Rainbow Mountain (peak is hidden from view) taken from the NW. We skied off the NE glacier (the slope on the ridgeline towards the right side of the picture).

This entry was posted in 2008, ski and tagged heli drop, rainbow mountain. Bookmark the permalink.