Ecuador is a small but incredibly diverse country. Ecuador has a 8,000 year old history dominated largely by indigenous communities. Incas came in to the picture as recent invaders in the late 15th century swooping in from what is now Peru. The Incas conquered and then were conquered. Their MO was to move conquered populations wholesale from one part of their empire to another; sometimes thousands of miles. This resulted in some native languages and cultures (Quecha most noticeably) being widespread over many geographies.

Ecuador is a country with an area of 248,000km2 – small compared to Canada at 9,985,000 km2 and comparable in size to the state of Oregon or the entire United Kingdom. Ecuador is 714 km (444 mi) long and 658 km (409 mi) wide. With the upgrades to the roads (including the Pan American Highway which runs North to South in the Highlands which goes through many small communities en route), it is relatively easy to navigate although traffic habits and driver aggression can make road experiences uhhh …. interesting.

Geographically Ecuador is slashed in half east-west by the Andes (sometimes referred to as the Avenue of Volcanoes, the Cordillerra or the Highlands). It’s remarkable that are no less than 28 volcanoes over 4000m within a 100km of Quito. Many of these volcanos, including the well-known Cotopaxi and Tungurahua are active. These two were rumbling during our time here disgorging ash and displacing people. The highest peak in Ecuador is the dormant Volcano Chimborazo with its massively glaciated peak and summit block standing at 6,310m. Another mind-blowing factoid; the Equator runs through the glaciated Volcano Cayambe (5790m) so you can always bike, hike or ski on glaciers at the equator if that’s your fancy.

To the east lies the Amazonian Jungle (aka the Ecuadorian Orient). To the west lies the coast with its beaches and tropical lowlands. Of course Ecuador is also home to to the biodiversity unparalled Galapagos Islands, landmark to evolutionary biologists (our trip there in 2012). All this incredible diversity of terrain in such a relatively small country. To finish this trip we checked out the Ecuadorian Orient at the Cuyabeno Lodge. This is a part of the Amazon.

From top to bottom: the Amazonian jungle in the Cuyabeno Reserve, Volcan Chimborazo, the Galapagos

Ecuador is bisected by the the Equator so the days are consistently approximately 12 hours long. The weather is fairly uniform other than a marked rainy and dry season. There are cooler temperatures in the rainy season (Oct/Nov in the Highlands; April to July in the Orient). Our tour was right between the start of the dry and rainy seasons and we were fortunate. During our visit rain was always forecasted but rarely came. When it fell it did not last long.

Ecuador does not seem to be on the radar for mountainbiking compared to other neighbours such as Peru and Bolivia. Our outsider’s viewpoint is that this could be due to a variety of reasons, political uncertainty; lack of a critical mass of home-grown bikers; or the fact that the Galapagos is Ecuador’s main attraction. Similar to the popularity of Whistler in BC, many probably know there is more riding in BC then in Whistler, but how do you find out about it?

Because there isn’t much information about good riding in Ecuador we elected to go with a local. Our guide for our trip was Mateo Cuesta of Ride Ecuador. Mateo is a young Ecuadorian who engages with the communities where he rides. Mateo has spent some time in the US providing him with English fluency as well as some knowledge of gringo needs ie an understanding about what North American/European mountain bikers want from a mountain biking vacation. He has an intimate knowledge of the Ecuadorian trails and has created a ten day riding experience that will give you a good taste of the Ecuadorian trails while gradually acclimatizing you. This means you won’t be thrown headfirst onto trails at 4500m+. You will also better manage your time navigating areas that are not really mapped. You also won’t have to drive (check out the last section of this video). You’ll also find places to stay and eat after the rides to experience local Ecuadorian cuisine (and no its not just grasshopper, guinea pig and jungle slug). 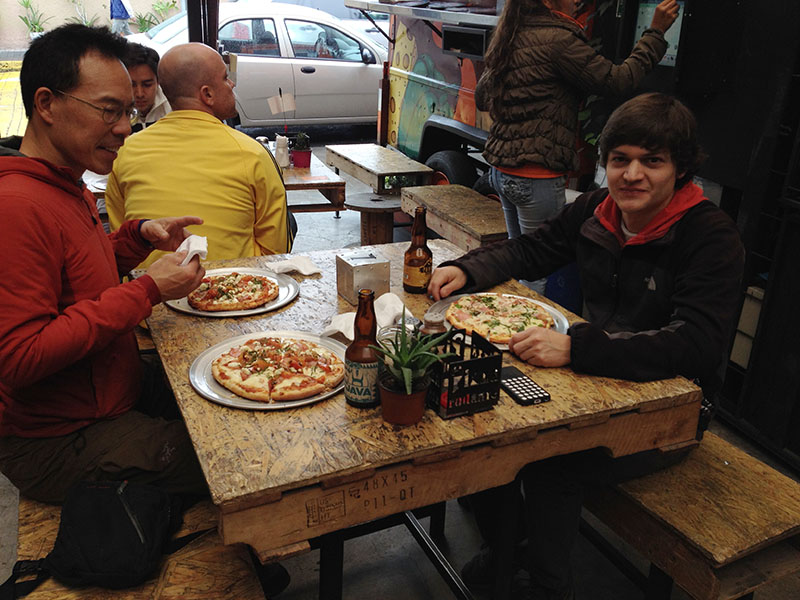 We arrived a day early in Quito to acclimatize. We flew United which charges $200 each way for your bike. I would also check out American Airlines which has a different cost structure making it much cheaper to travel with your bike. For our needs we found the flight times better with United. We stayed at the Hotel Casa de Hacienda La Jimenita for three nights. This hotel was between Quito and the airport; was very quiet and a good location for our first days in Ecuador.

Mateo greated us at the airport and settled us in then we rode for 10 days.. 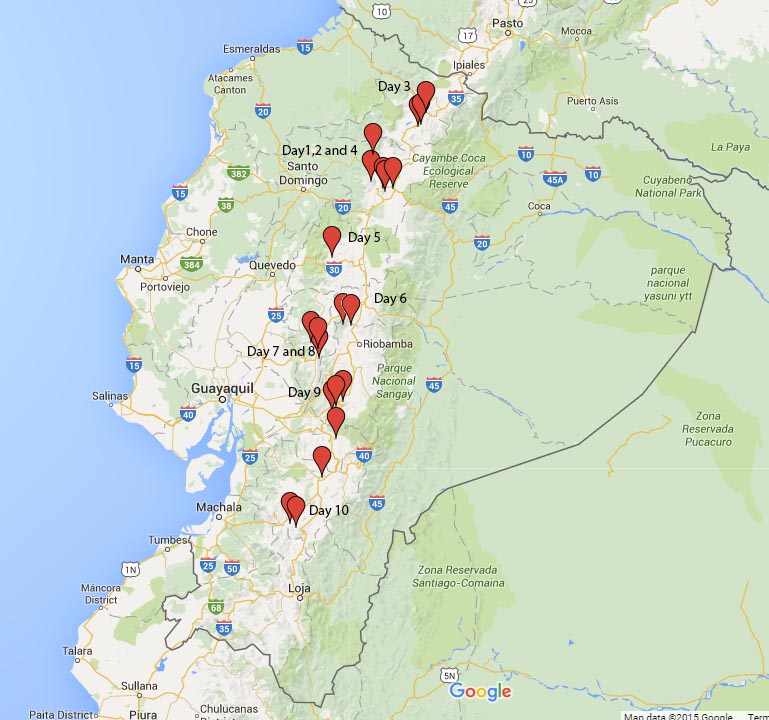 Day One was a shuttle close to the Hotel on a local extinct volcano – Ilalo. This ride offered a great view of the area as well as a good introduction to the trail characteristics of Ecuador. We arrived in rain, these trails were still a bit wet so quite slick! Our second run was a trail that Mateo has worked on near the town of Lumbisi.

Day Two – We rode another extinct Volcano where Indigenous people have lived for 2000 years – Pululahua Botanical Reserve. The Infiernillo Trail starts at the top of the reserve and ends in a small town. A recent slide resulted in a new trail and new fun descent!

Day Three – We headed North to a more arid area with high alpine riding and lots of Cacti on the trail to keep you honest. This area had a real Grand Junction Colorado feel. Near the town of Ibarra we stayed at the Quinta San Miguel. The Chota trails are shared with motorcycles which creates many options resulting in fast and flowy trails.

Day Four – We were back near Quito and stayed a the Casa Hebling Hostel which offered an opportunity to wander through a newer part of Quito in the evening. Mateo picked us up in the morning and after an hour or more of dealing with after rush hour traffic we were across town and heading up to the Rucu Pichincha, an extinct volcano overseeing Quito accessed by the Teleferico or Gondola. We climbed to 4000m on the Gondola, pushed up to 4120m and descended through the Paramo – or Highlands back to the base.

Day Five – We drove to most western Volcano Quilatoa and stayed at the Alpaka Quilatoa Inn. This Inn was started and run by the indigenous people who saw the tourist draw of the Quilatoa Volcano and took advantage of it. At an elevation of 3910m exertion is tough. We did a short ride and considered this a rest day. This is a beautiful spot offering many hikes and views. Quilatoa is a water filled Caldera 3km wide and 250m deep.

Day Six – We drove towards Chimborazo – the tallest mountain in Ecuador. We stayed at the Posada La Estacion, run by professional climber Rodrigo Donoso who offers climbers a place to acclimatize before climbing Chimborazo. We drove to 4500m, hiked to 5000m, to say we did then started our descent back to the lowlands through old Inca trails, indigenous villages and fast bermy trails dropping to the Guaranda valley.

Day Seven – We left the Highlands and travelled to the lower town of San Miguel to stay with Mateo’s friend Marcelo Vargas at the Bellavista Lodge. Marcelo’s house sits high in the hills with an incredible view which includes Chimborazo on a clear day. Marcello is a Horseman having two horses and having spent some time in the USA riding. He has cleared many trails in the area to be used by horses and bikes and is quite active in the community. On this day we rode the popular and steep Mama Rumi trail. This is an Inca trail turned smuggling trail turning mountain bike trail. This trail and area hosts the popular Downhill Mama Rumi.

Day Eight – We did a short ride on the Camino del Rey trail which is maintained by Marcelo. This short fast trail starts in the upper hills and descends to the small village of San Pablo.

Day Nine – We drove south towards Cuenca to ride with another active mountain biker, builder, rider and local; Andres Sotomayor or Soto. We stayed at the Posada Ingapirca – a hotel near the second largest Inca Ruins in South America. The trails Soto works on are near the town of Alausi and the geographical feature – Nariz del Diablo – Devils Nose. This area has many small communes that are linked by old Inca and new trails. Soto has worked with the community to establish a few epic descents. Today we did I-line which started at 3600m and descended a long long way.

Day Ten – We drove to the less bustling but incredibly engaging colonial architecture town of Cuenca in southern Ecuador. We stayed at the Hotel Victoria which borders the Old Town making this a great location for seeing the Cuenca sights. We drove south to where the La Paz trail starts. Again this is an area where Soto has been working with the communities along the route to establish a trail for mountain biking. Without such efforts there would be little riding in Ecuador, or anywhere for that matter.

Thus ends our 10 days of riding in Ecuador. While there is opportunity to ride more each day, we felt we rode enough; taking into account unfamiliar trails and riding at altitude. There are always options for longer or more rides in the area, but we were also there to experience the culture. Mateo did a great job pacing our trip and providing a great riding experience in this compact and diverse country.