After skiing yesterday at Grizzly Shoulder, my appetite is not whetted but sharpened. It’s bright and clear today in Revelstoke where we’re holed up in the Frontier Motel; drawn by the attraction of big greasy breakfasts and relegated to 60km drives to get to Glacier National Park; every hut and the Best Western in GNP are booked over the weekend. FYI – the Frontier Motel is rustic but cheap – bring earplugs and a good appetite.

I am told that bluebird days in this neck of the woods are rare and to be taken advantage of; off we go again down Connaught Creek. This picture tells you why it is sometimes referred to as the “Valley of the Shadown of Death”;

slidepaths to the right of them,

slidepaths to the left of them,

in to the valley of death, skied the four

of the Light Brigade)

You have a choice of taking the north side of the creek and being slowed down by the enormous debris of the Grizzly slidepath or moving a little quicker down the south side and being exposed to slides off Cheops. We choose to take the south side halfway to Balu Pass; then cross the creek and take a skintrack which takes some scanty protection through trees on the north side. Although conditions are pretty stable today,

I can’t say I’ve ever felt so exposed for that long a time.

Here is Sharon approaching the toe of Balu Pass where the creek from Bruins Pass runs into Balu Pass. Mt MacDonald (2878m) is the impressive peak in the background; Cheops’s north face is in the shade on the right. 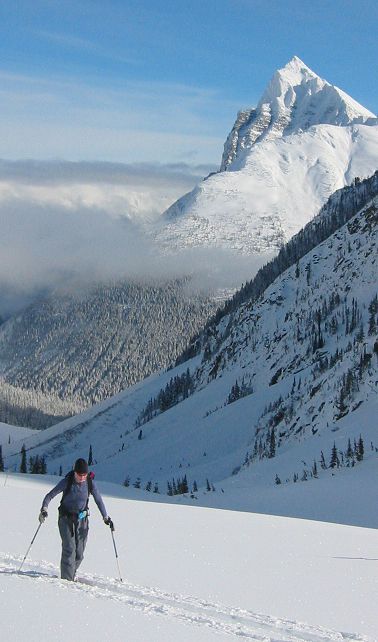 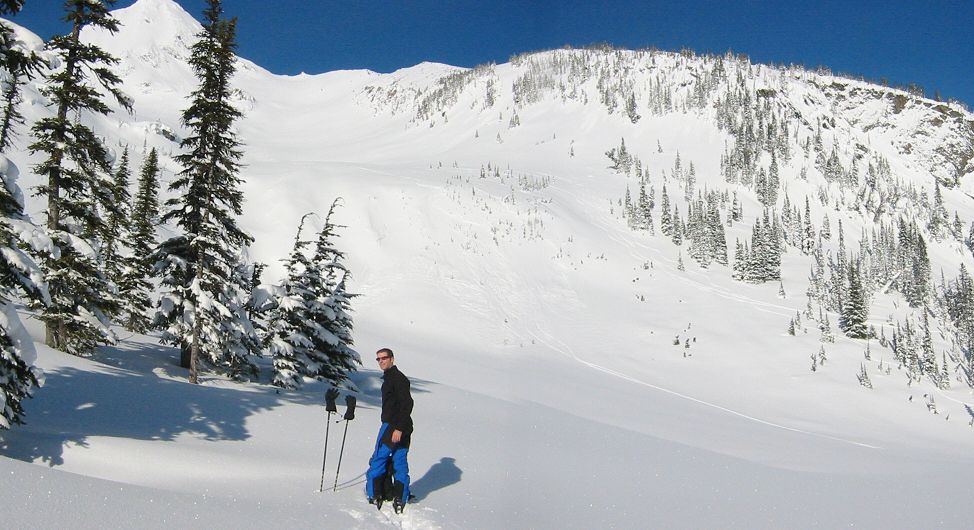 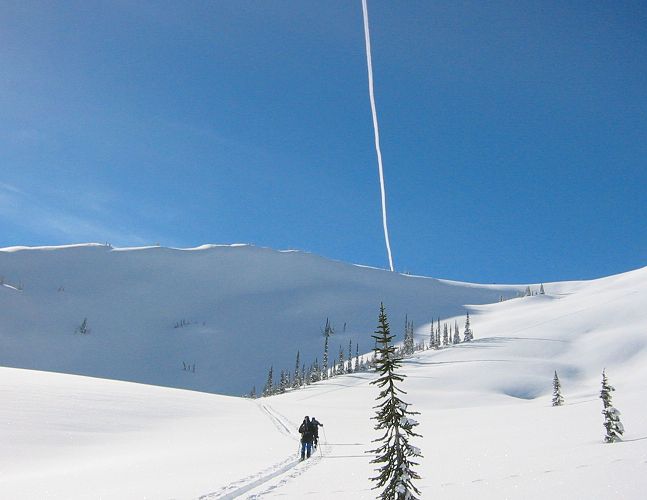 We head up to the top, find a nice steepish SW slope (37 degrees at the top – about 32 degrees at mid point measured to the side when skinning up) and ski down. A pit dug here fails on a 4; there’s some mild layering but it looks like the late January rains has broken down all the really funky stuff. Here goes Sharon. Altitude is 2108m 0459416 5681843 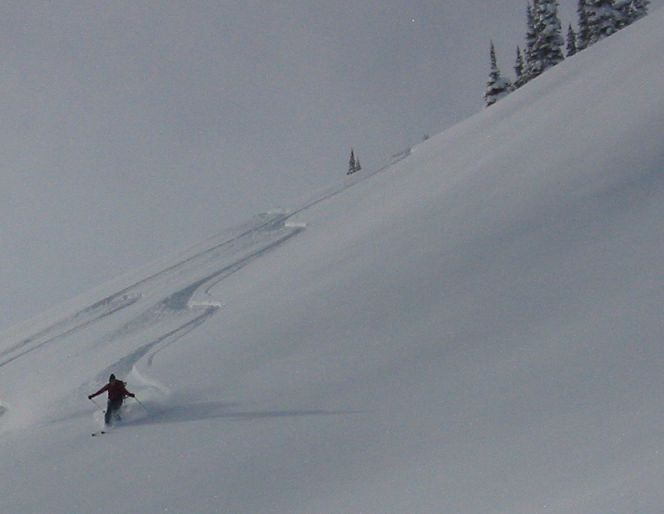 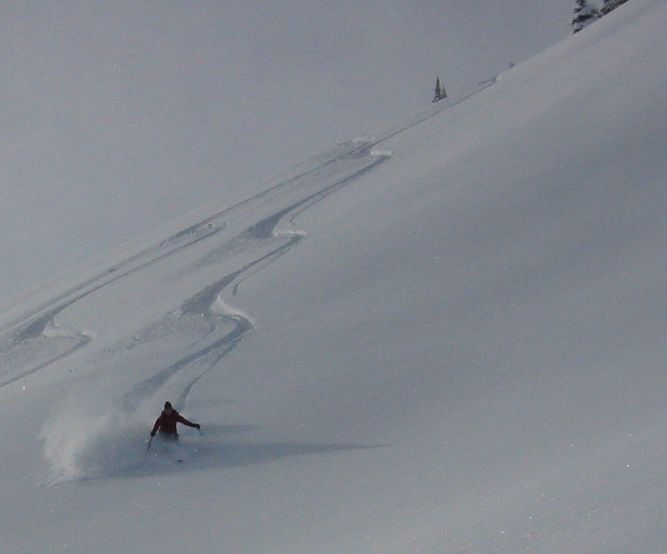 The slope breaks nicely into two 150m elevation sections separated by a small flat and is above treeline. Here I go.

Because it doesn’t take long to get to Balu Pass; we have time to admire our tracks before heading off for another run. 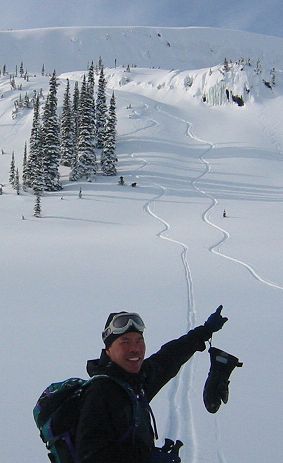 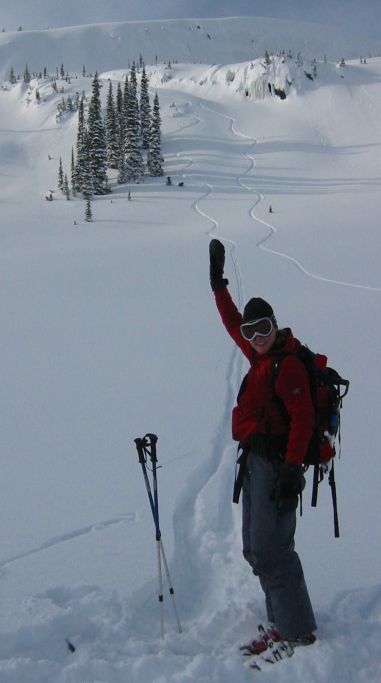 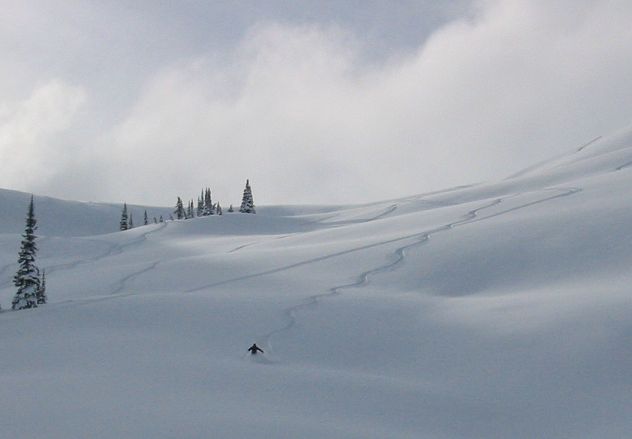 Although described as “intermediate”, Balu offers up a lot of choices and access to other areas. The next time I’m up here I’d love to check out 8812 Bowl, Bruins Pass etc. Tomorrow however we are off to Lookout Col in the Illicilleawaet valley.

This entry was posted in 2005, ski and tagged balu pass, rogers pass. Bookmark the permalink.