Rogers Pass has some of the heaviest reported snowfalls in British Columbia. 7 hours from Vancouver, its always been a place I’ve wanted to ski. Its one of those places I never seem to get around to visiting in winter. With this winter’s coastal snowpack a rained-out joke, its time to scratch the itch.

Rogers Pass is a national park and has timely localized avalanche reports, reflecting the frequency of avalanches in this area. This map shows the general area. 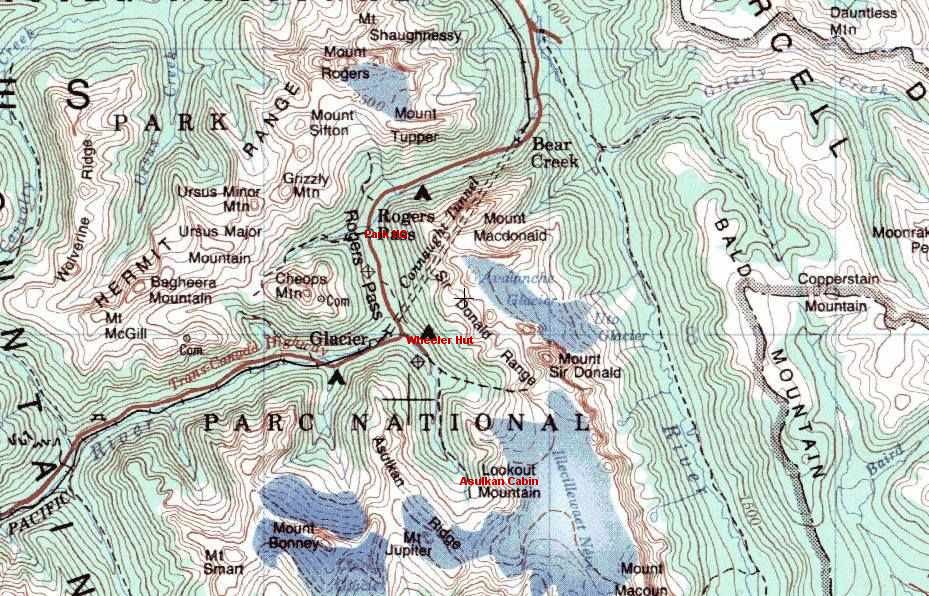 Since we’re rookies in this area we hang around in the very well-appointed Parks HQ, register our party, scope out some of the easier routes and check forecasts and reports. 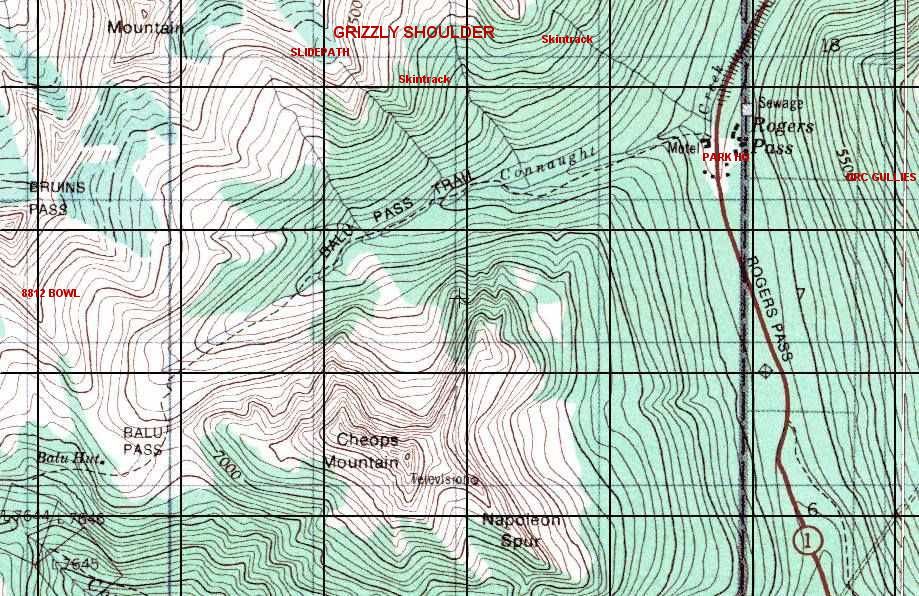 Its an 800m skin up to the top of Grizzly Shoulder stopping short of the ridgeline which you would take if you want to go further on tours like the Little Sifton traverse. We take the skintrack starting out on the south side then crossing to the north side of Connaught Creek. At the first slidepath about 1km in take the skintrack up bear right and straight up through glades. Note that there are skintracks going up Grizzly Shoulder before this route which I am told are more direct routes. We start our run at 2104m 0462238 5684490. 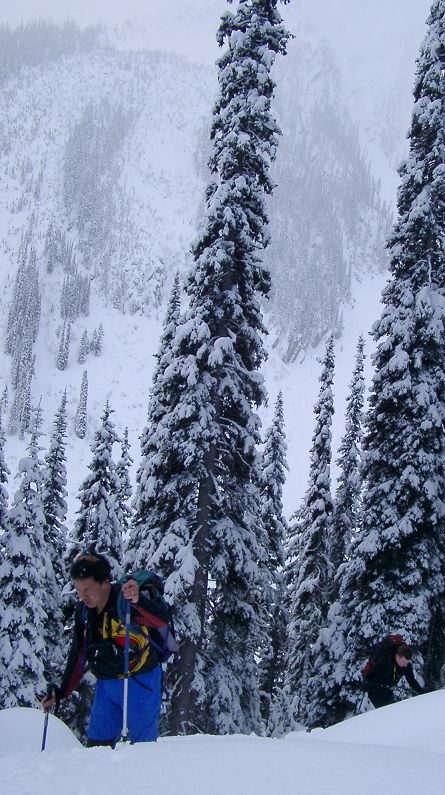 It’s snowing heavily the whole way up. Even though its relatively warm (-5), the snow is remarkably light, at least by coast snow standards. It’s well protected in the trees and Sharon immediately picks the steepest line cutting off a convex roll and making tracks – no sluff so it all looks good. 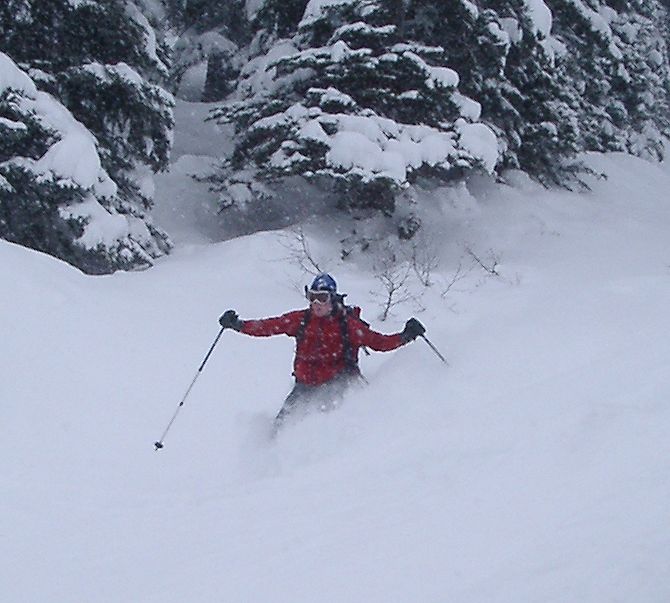 It’s too much fun in snow this light and forgiving, Whether we fall or not, there’s so much snow we’re literally drowning in the stuff! 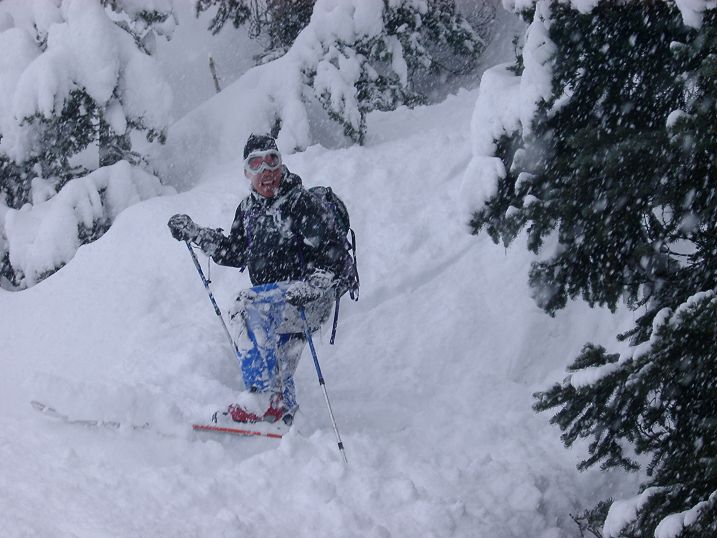 We take just one run, consider going for another but its getting late and dark so we head out. Here’s Simon skiing out next to the huge debris left at the Grizzly slidepath.

The group on the ski out at the bridge crossing Connaught Creek. 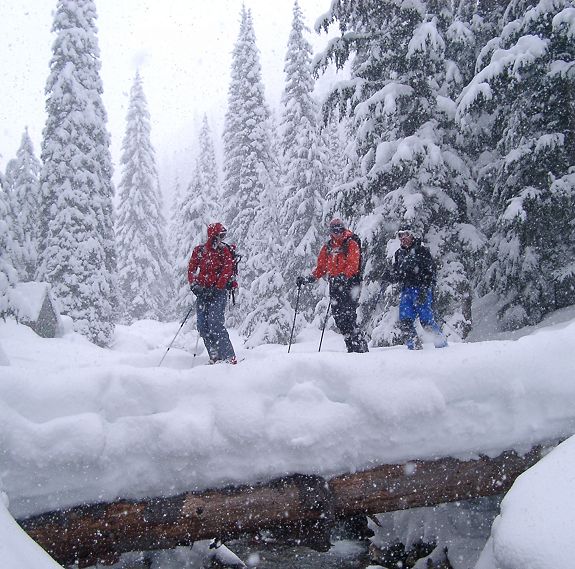 As an aside, here is a view of the general area taken from the south; the picture is taken from Lookout Col, some 7kms away 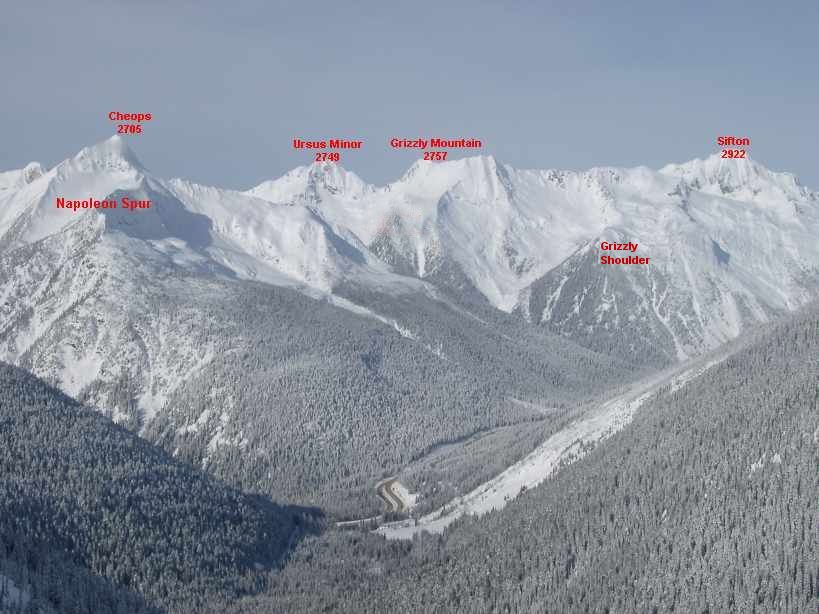 This is my first time on alpine touring bindings since some 10 years ago when I last used Fritschi FT88s. These Fritschi Diarmir Titanal IIs are incredibly user-friendly. The lock down and free-heel modes are easy to switch between. The performance and boot release is very similar to alpine-bindings. They are well thought out and engineered. I’m not too crazy about the way the skis are hard to control in kick turns; the binding mount position means that the skis hinge at the toe – far forward of chord centre – so the tail of the skis are hard to control in tight kick turns.

Sharon’s review will shortly follow. Tomorrow we plan to repeat the trip down the Connaught drainage but this timeto Balu Pass.

Comments: As a telemark skier who has enjoyed the backcountry powder for the last 10 years I have often looked with envy at my AT counterparts who rip the turns under any and all conditions. The Fritschi Freeride was my entry into this world. The Fritschi Freeride bindings are easy to get into and out of, just like my Alpine Bindings. No more fiddling with heal throws or wondering if the binding will release when I fall. My confidence on these bindings is as good as when I’m skiing inbounds on my Alpine Gear. During hard pack conditions I was able to carve my Volkl G4’s like a knife through butter. Despite the softer AT boot the connection to the ski was confidence inspiring. While the Free-heel mode for touring is different then the Telemark Set up I was able to adapt to the gear in a couple of steps. The only cons with this set up is the weight of the binding ( 2kg vs 1.2kg for my Telemark Bindings) and traversing through undulating terrain you cannot control the ski as easily with the toe – binding connection vs the whole foot – binding connection of the telemark set up. All in all I think my Telemark Gear will be awfully lonely on our treks into the backcountry.

This entry was posted in 2005, ski and tagged grizzley shoulder, rogers pass. Bookmark the permalink.