Yesterday Lookout Col today Perly Rock. The route is very similar and diverges in that instead of heading south to Lookout Col, head to the icefall at the base of Sir Donald/Vaux Glacier and beeline it straight to Perley Rock. Icefall is 11U NAD 83 1684m 04679162 5678022.

I haven’t seen Greg – an old ski buddy – in over 10 years. Since then we’ve discovered the joys of earned turns and wouldn’t you know, he ends up living in backcountry nirvana in Revelstoke 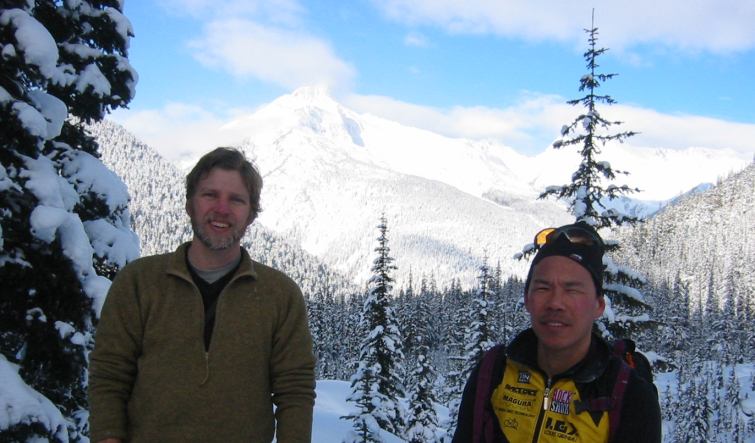 Here the group crosses the first moraine on Illicellewaet creek with Glacier Crest in the foreground. 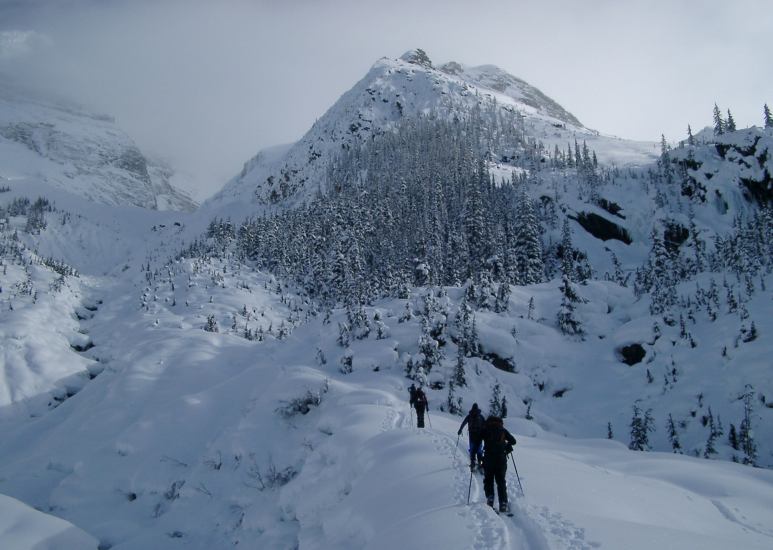 The icefall is pretty impressive – you want to know where it is on the ski down. 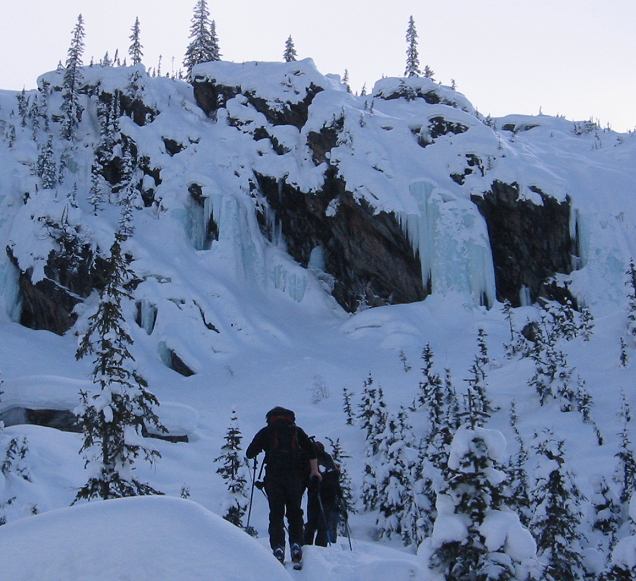 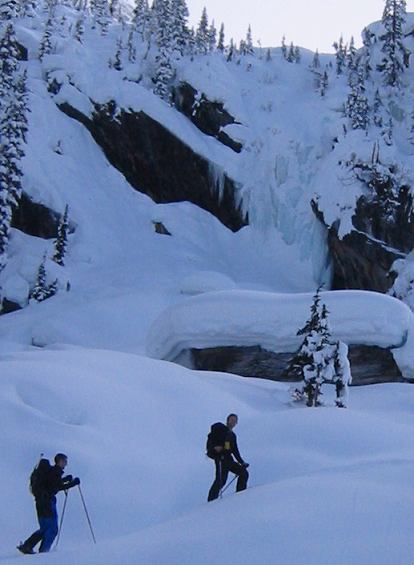 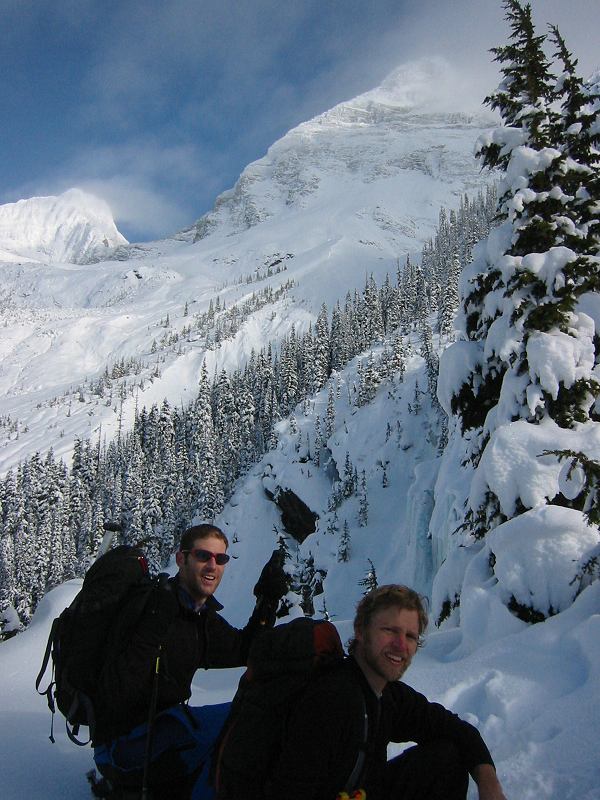 The approach to Perly Rock is simple routefinding once you’re past the icefall. Thankfully an earlier group is breaking trail – my sea-level lungs are hurting for oxygen after a few days of skiing. Steve on the approach. I just can’t get over the scale of this place 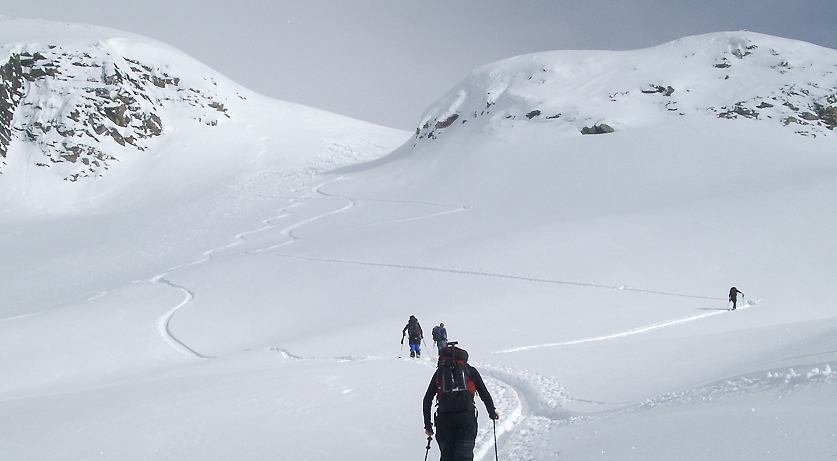 Check out that slope in the background as we near the toe of the glacier and the peak of Perly Rock! Greg and I are eying it up. 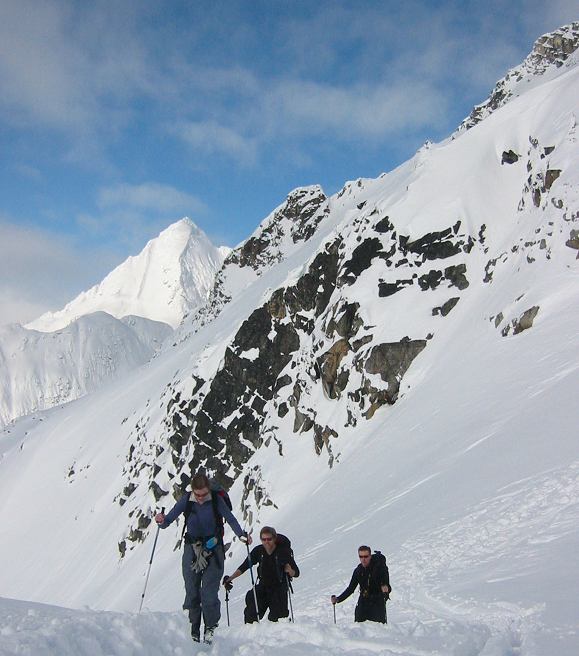 We were planning on traversing the glacier to the south toe of Terminal Peak where apparently there is some good skiing but cloud is coming in from that direction so instead Greg and I, keeping that steepish slope off Perly Rock in mind, do some “peak”-bagging. 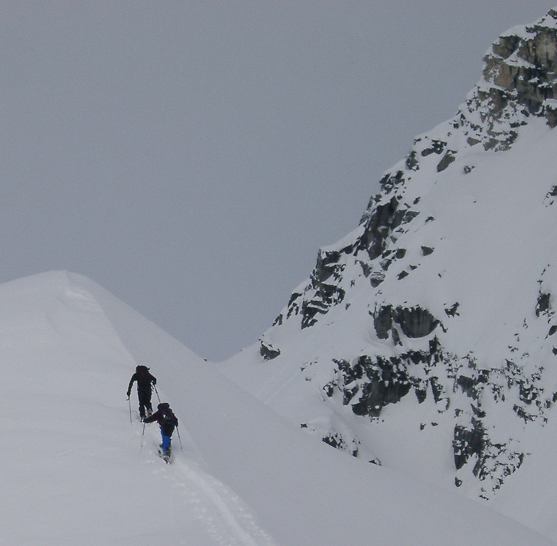 Unfortunately, that slope isn’t as stable as we had thought. Every turn I make kicks off sluff so its a conservative jump-turn and wait and jump-turn and wait etc ski down for me. Greg takes a turn at the slope after I’ve sent a bunch of debris down. 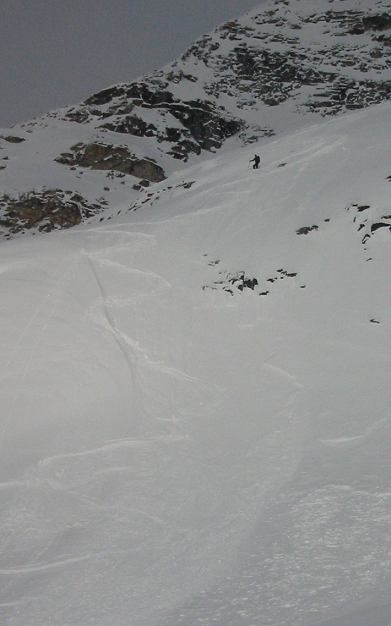 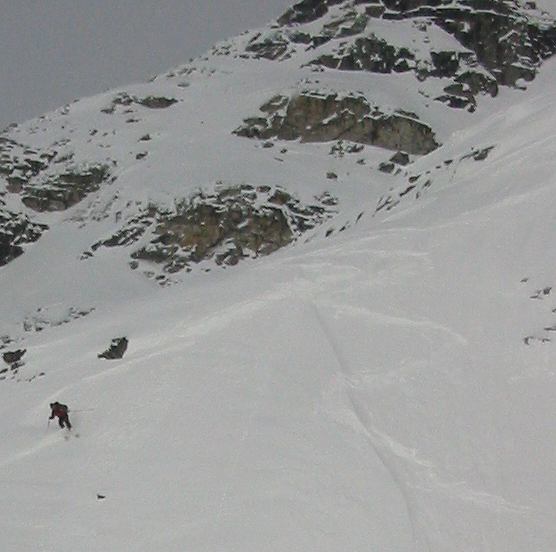 We continue on; Greg’s pretty comfortable in the powder! 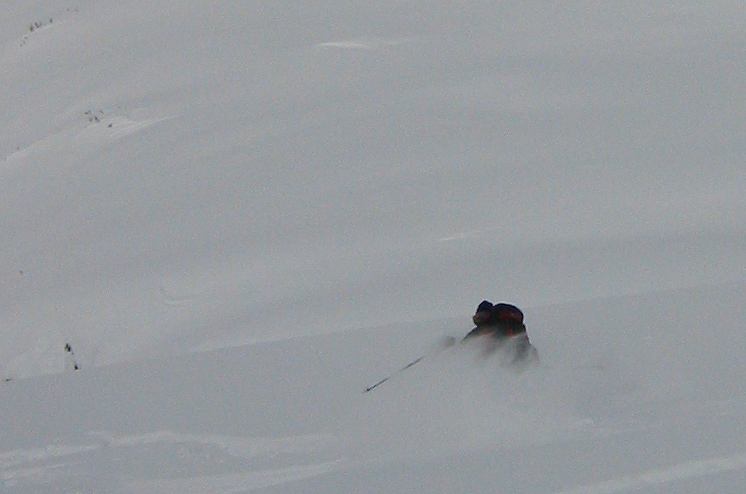 There’s some beautiful long perfectly pitched lines to be had from the top of Perly Rock to the icefall. I counted it as a 800m slope; losing count about a quarter of the way down at 45 odd turns or so. This run with Sharon shows how nice conditions are. 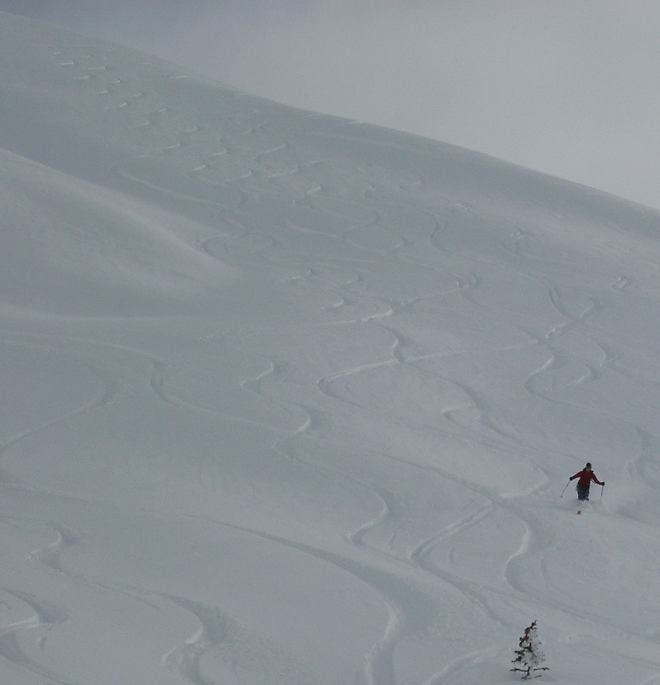 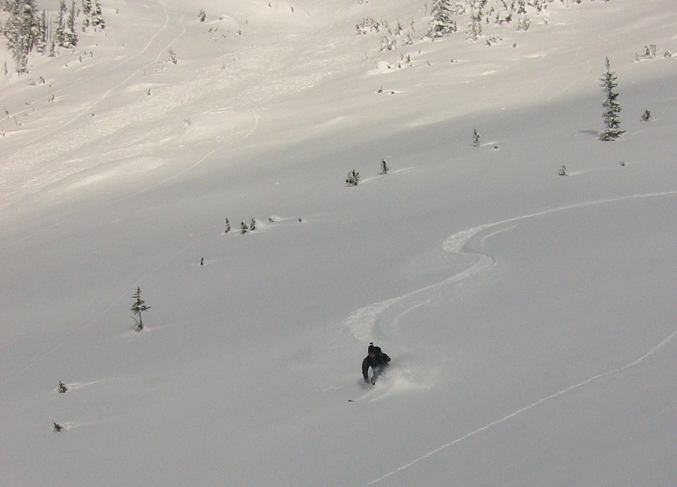 There’s quite a few features to jump off – Greg finds one of them. 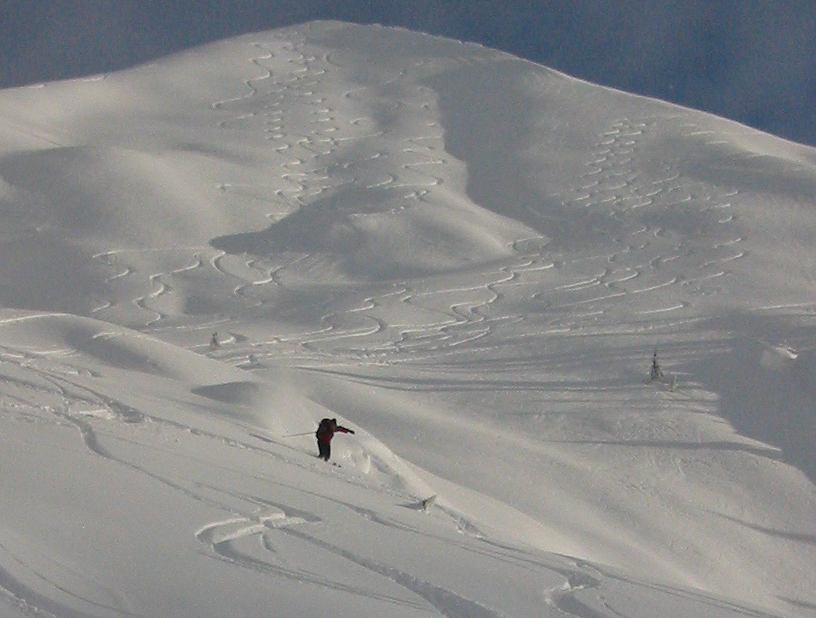 It seems like just a moment till we’re back at the icefall again. Steve finds some air. 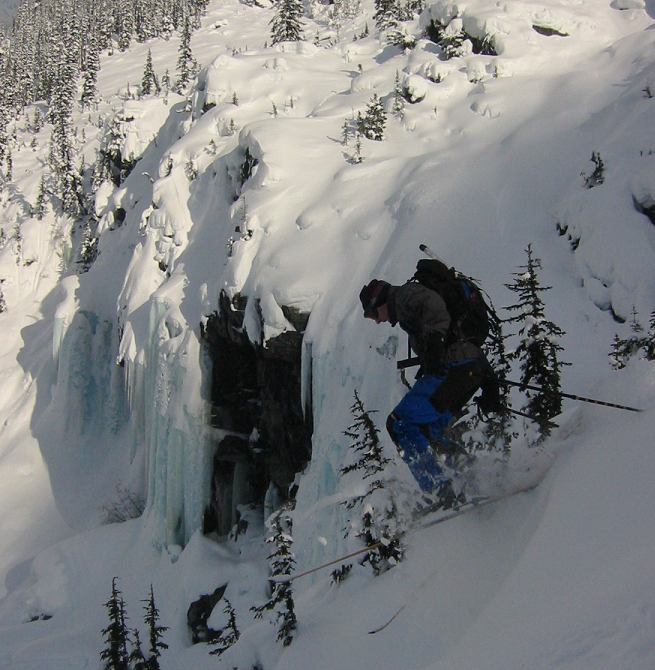 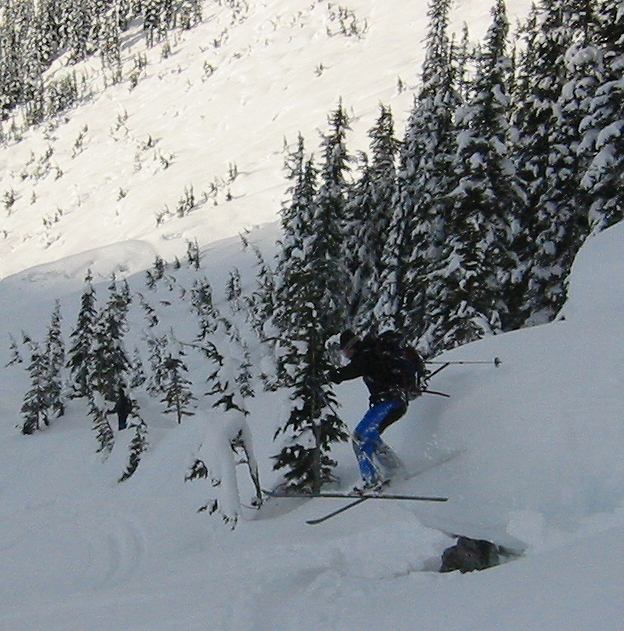 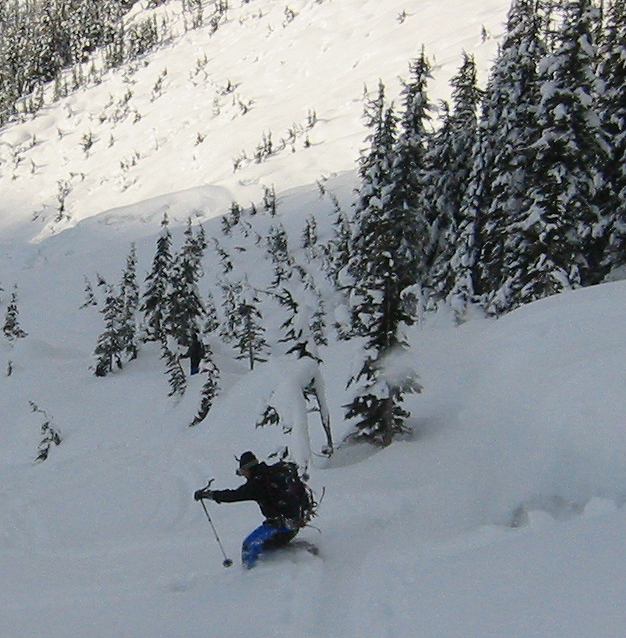 From the icefall we cross the creek which runs off the toe of Sir Douglas and the Vaux Glacier and contour over to one of the exposed southwest facing slopes. Unfortunately, prolonged exposure to the sun has crusted it somewhat but there are still turns to be had. 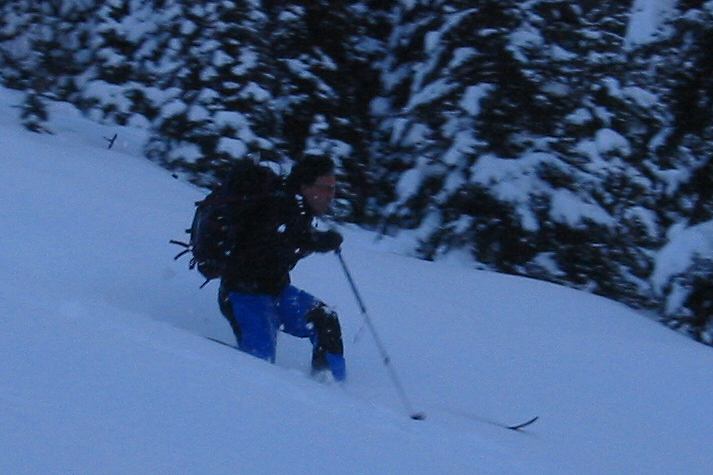 The view from valley bottom. We’ll be back! 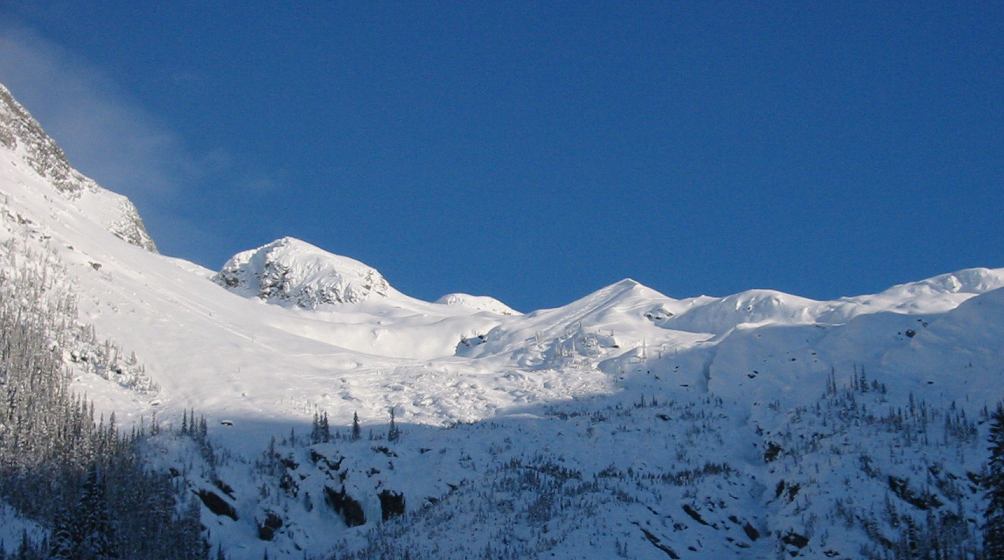 This entry was posted in 2005, ski and tagged Perley rocks, rogers pass. Bookmark the permalink.