The weather forecast looked pretty grim for this week and the following week. It’s tough to get any kind of skiing in late spring but word was there was still a good base up high. I had my eye on the Ronayne – Sun God – Tenquille area for a while and knew of a few pure N facing aspects. All I needed were partners that were just as willing to check out new unknown areas. A few calls and emails had Mike and Andy Traslin convinced to blow off a mid-week work day and head up N of Pemberton to check out Ronayne’s N face. 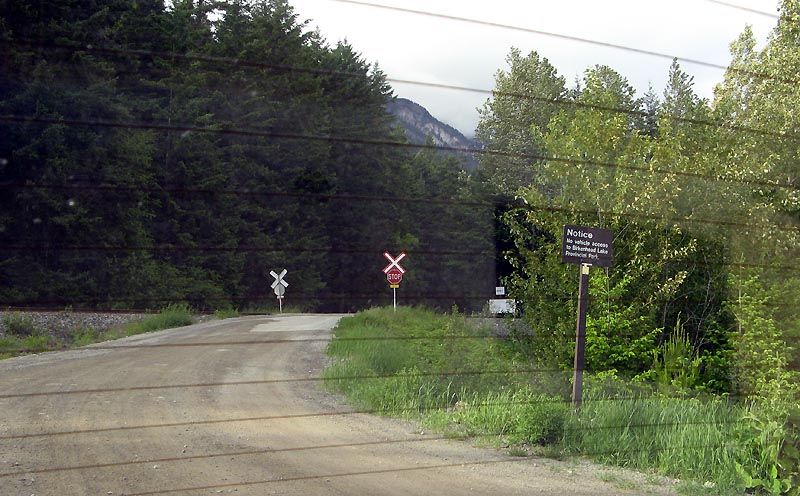 Birkenhead FSR is not marked as such from the D’arcy – Birkenhead road but instead is marked as Porter Creek Road. Keep an eye out for it.

N Tenas branch used to have a sign on it but now no longer has a sign. Look for it right as you cross a bridge across Tenquille Creek directly after you drive over the valley with Birkenhead Lk to the N.

To be honest, the trip started with a bit of a hitch as the brothers slept in and picked me up an hour and a half late. Then we drove right by the Birkenhead FSR and lost another hour getting on the right road before getting to the N Tenas branch. The Backroads Mapbook and directions from previous trips helped but the lack of a working odometer set us back a bit. The Birkenhead FSR is 47kms from Pemberton and the N Tenas branch is 10km from the junction of the highway. 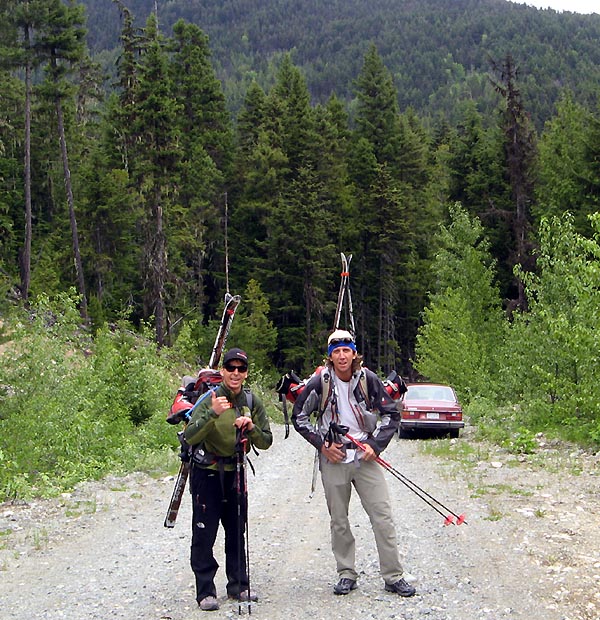 It would also be nice to either take bikes (we couldn’t as the car didn’t have racks) or have a short wheel base 4WD for the N Tenas road. The road is in good shape as there’s active logging but the waterbars are big. We ended up hiking almost the entire 7km length – starting at the crack of 10:15am or so and ending at snow at about 11:55am. I have to admit that I was more then a bit pessimistic about getting anywhere close to Ronayne after the morning’s gongshow. I had heard report from another trip about big cornices on the summit and was also breaking a lot of rules about late spring early starts. 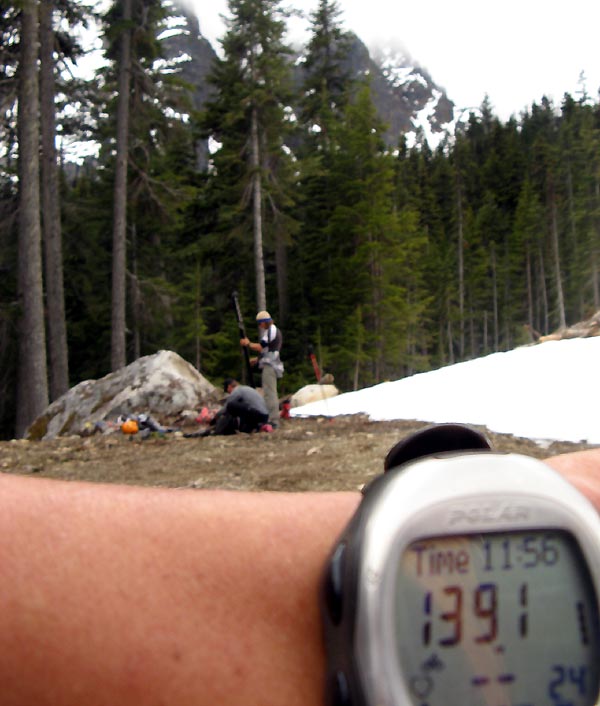 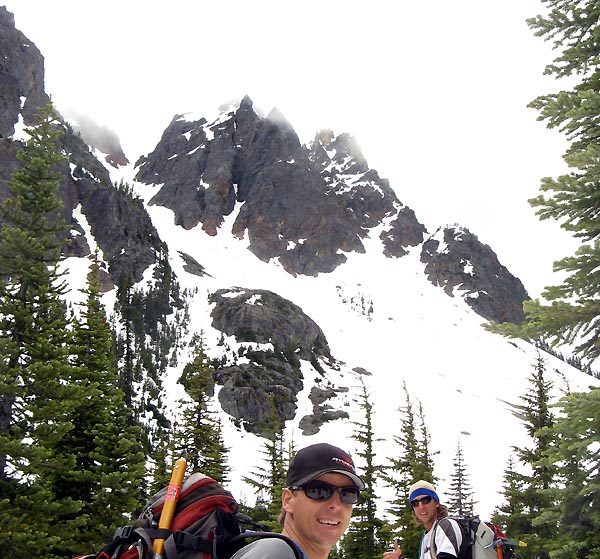 The N face of Ronayne lures us on.

We did however persevere. Much to my surprise and to the delight of all of us, the skin through the forest to the base of Ronayne was short – only 10 minutes and we broke out to a view of our entire route. Then we got lucky and found the debris of an old slidepath that totally bridged the raging torrent of Tenas Creek, now in full spring melt. We were at the bowl at the base of Ronayne (about 1500m) in about half – an – hour. The whole face had already slid and we could skin up a base of about 100 cms in relative safety. So long story short, we went for it. 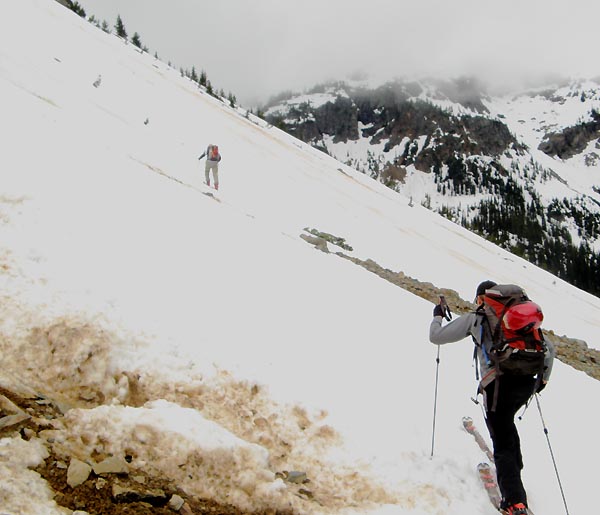 The access was easy – started from the last snowbridge across Tenas Crk at about 12:30 noon 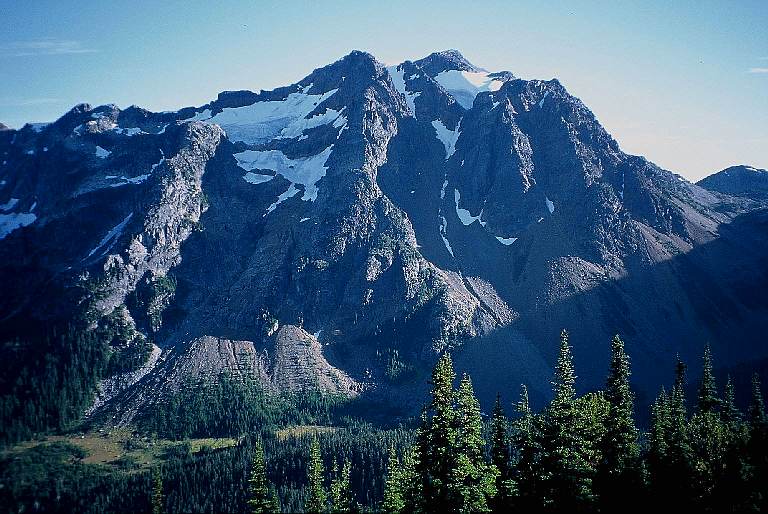 Ronayne from Sun God ~ photo Drew Brayshaw. We climbed the right Y of the Y couloir to the ridge just below the snowpatch at the summit then climbed on rock the rest of the way. The lookers left side of the summit was heavily corniced so we avoided that. It would be tough to ski right from the summit 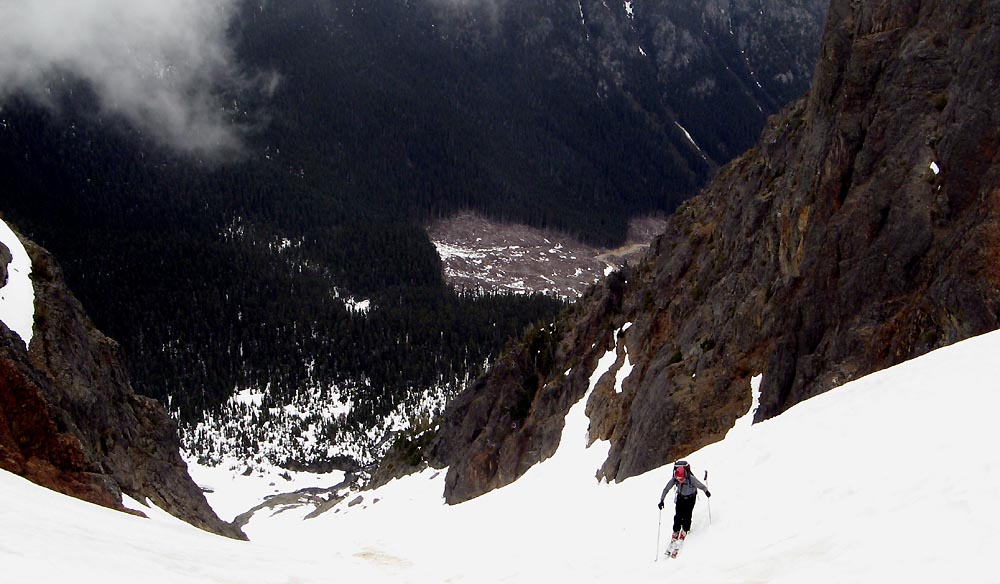 Up to the notch below the lookers right Y of Ronayne’s Y couloir at about 2100m at 2pm or so. 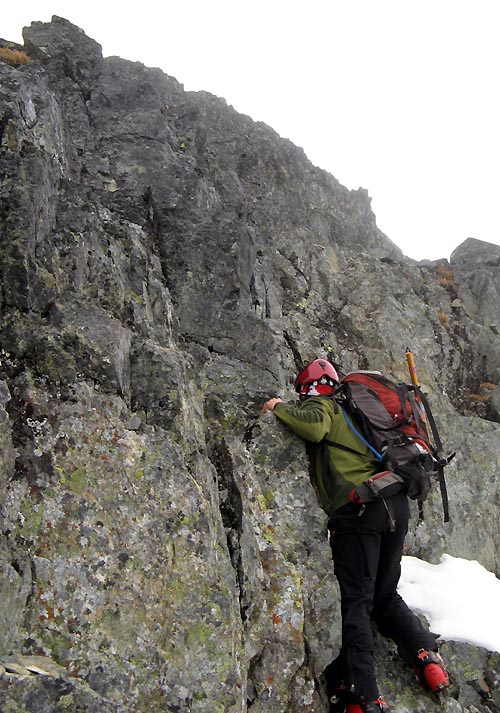 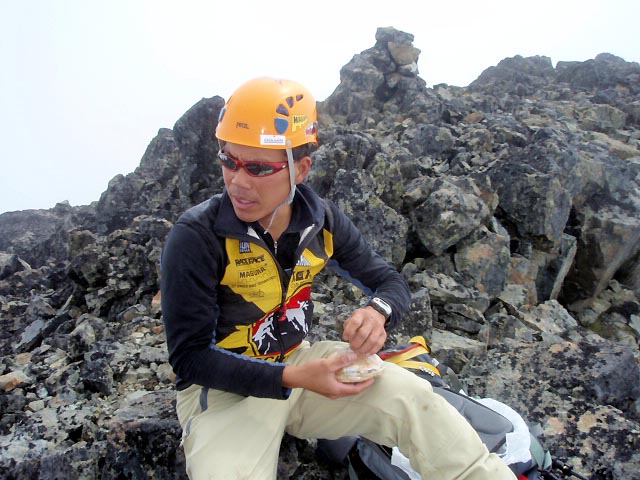 Taking in views at the peak. Flashes of blue sky tantalized.

Not much farting around after that as the snow was pretty isothermic and even though it was thin and post-climax slide it didn’t seem like a good idea to sit around and have tea and crumpets on it if you know what I mean. We went from 1500m to 2290m in about 2 hours without any breaks. There is a narrow choke at the intersection of Ronayne’s Y – couloir where we grouped up and considered options. We chose to avoid a direct route to the summit due to the presence of the overhanging bus-sized cornice and headed over to the climbers right (W) and ascended via crumbly class 3 rock to the summit ridge then to the summit. 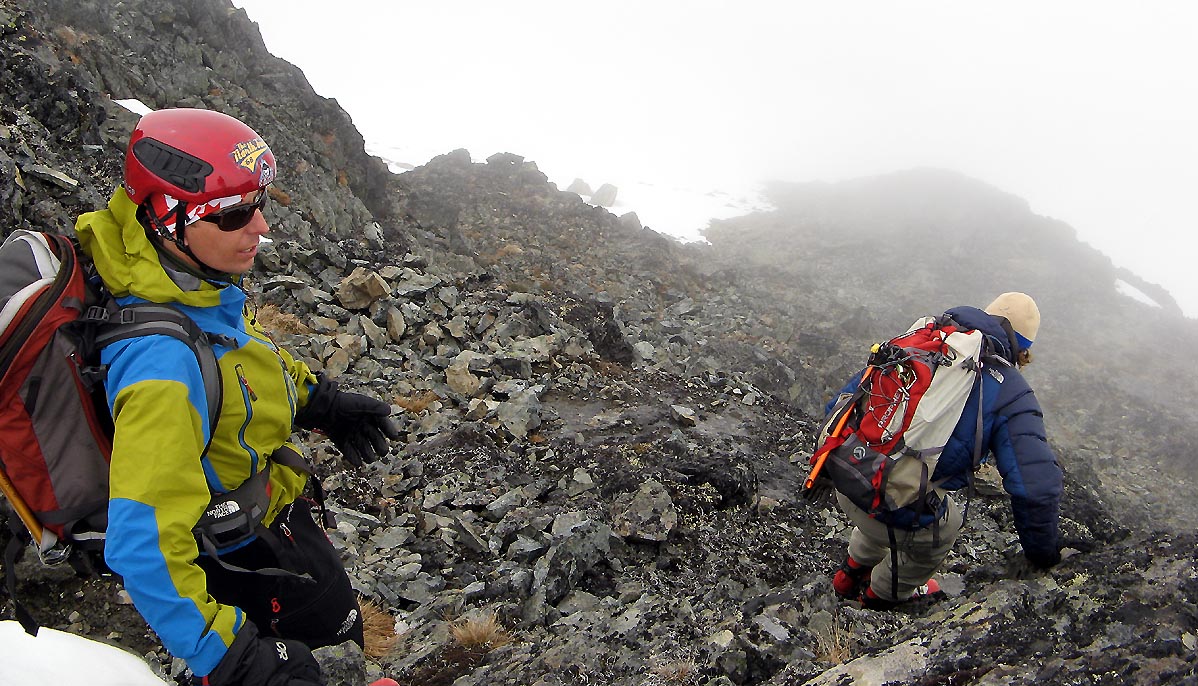 Mike and Andy scrambling down 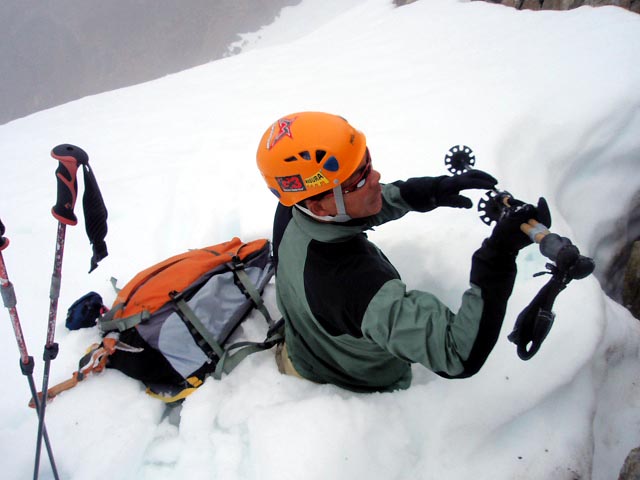 The weather unfortunately never did clear up but thank god, it didn’t rain. In retrospect if it had been sunny the snow would probably have been dicey so perhaps it was good that it stayed shady the whole day given the tardiness of our start time. We quickly got back down to our skis. I jumped down to my gear and plunged to my waist on slurpy snow and had to use my shovel to extricate self. We then skied down navigating the choke and some slow moving wet slides back to the valley floor.

Mike making turns back down to the choke 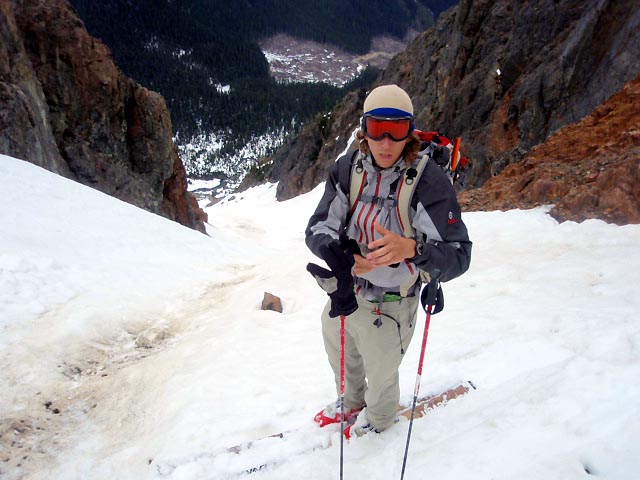 Andy above the choke 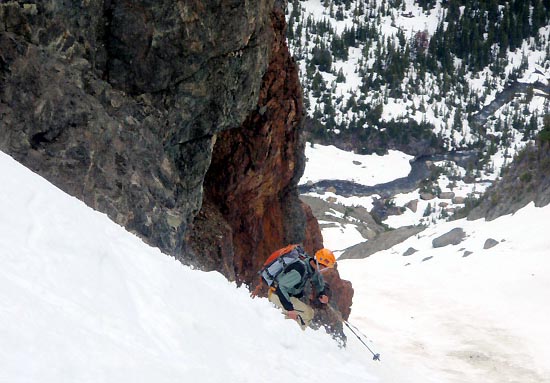 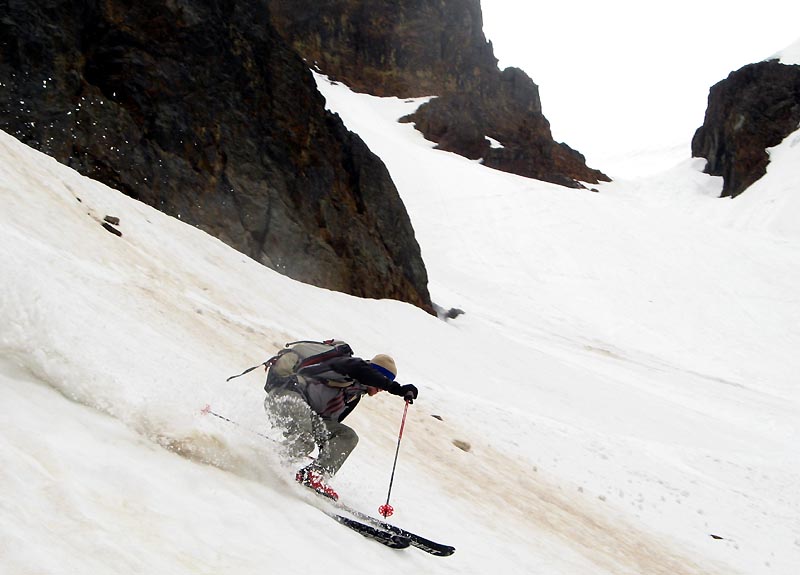 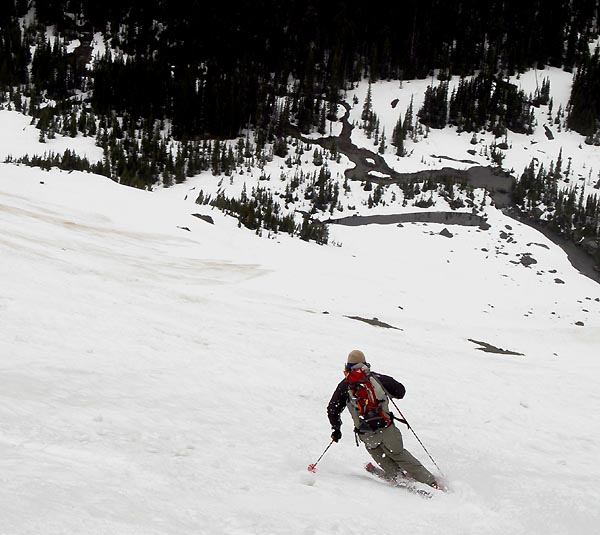 Surprisingly decent turns back down to valley floor 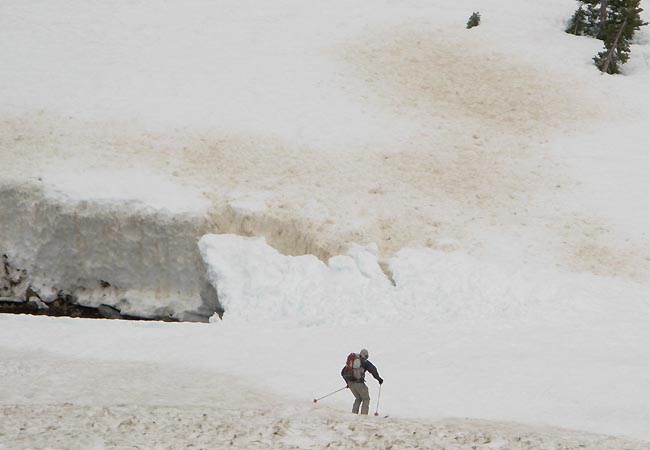 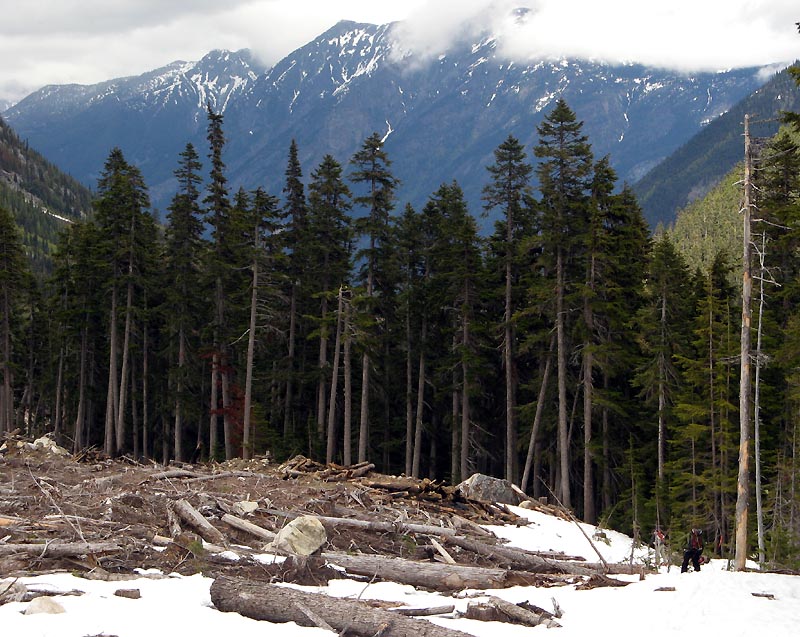 Mike and Andy tucking out the clearcut

Unfortunately we still had a thigh and shin-splint-inducing crippling 7km hike back down to the car. Strong recommendation next time to bring bikes! We made it to Splitz Grill in time to catch the last period of the Stanley Cup and watch the Red Wings clinch. 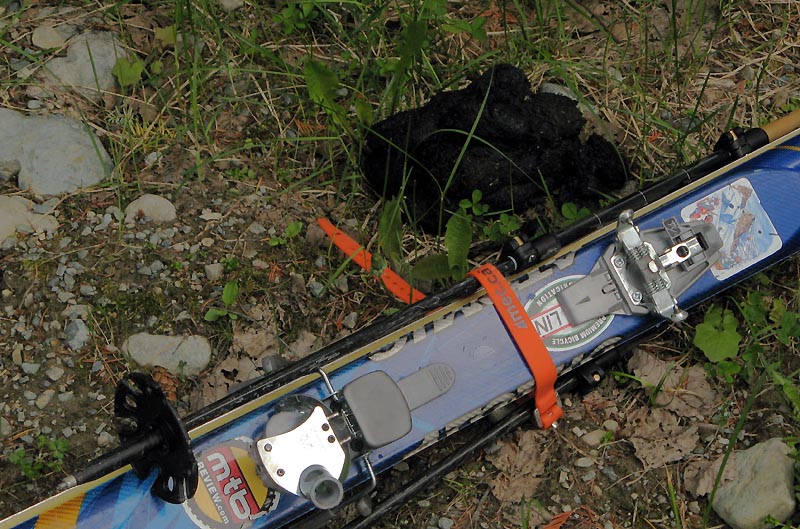 A tribute to Dynafits, Komperdell poles and Atomic skis that make it possible for us t dodge bears and isothermic snow hazards 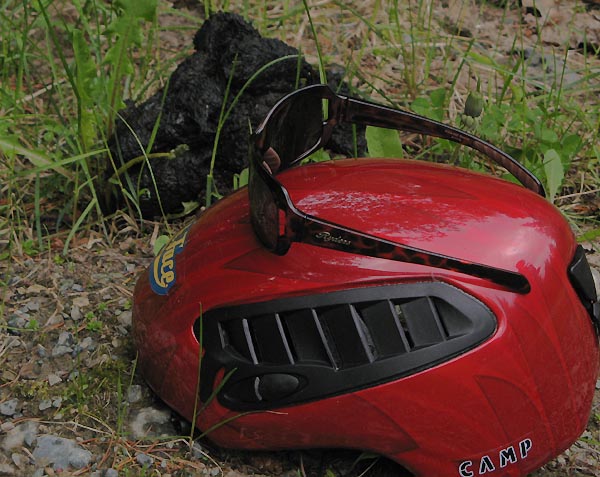 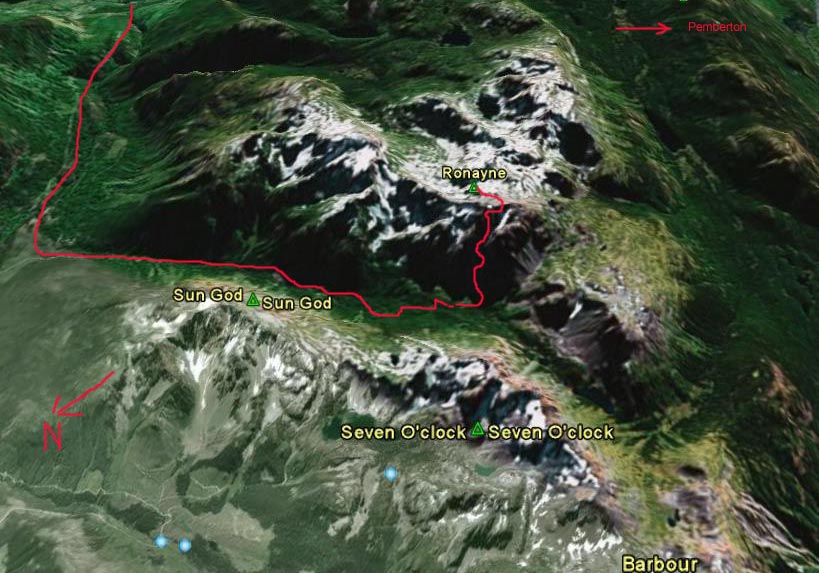 This entry was posted in 2008, ski and tagged ronayne. Bookmark the permalink.