Weather in the coast range has been sucking hind tit for the last little while with very little new snow and temps in the -20s lately. When Aaron emails and tells us that there’s lots of snow in Rossland, it doesn’t take much to get us out there. A few quick calls and lining up some locals as tour guides for us wet coasties and a place to stay at Angela’s Bed and Breakfast (more on that later) and we’re off to the Kootenays. 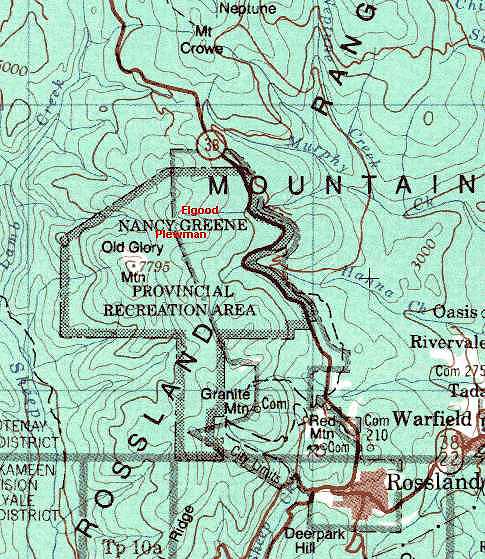 Skiers in Rossland are very very very spoiled. 10 minutes from town is Red Mountain which is typically all a powderpig could want. Another 10 minutes further up the road are tons of other stashes many of which are described in the Kootenay Experience site here. 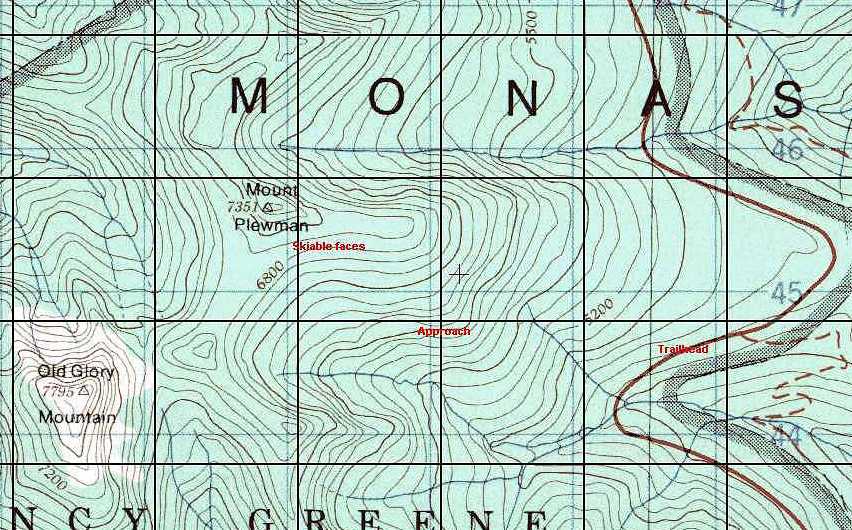 Because the trailhead is so close to town, we don’t have to start too early. Here are Sharon Aaron and Megan

It’s a popular area. The skin track cuts west-east and is below a cut-block. The skiable terrain cuts right back on to the skin track making navigation easy. The highway is visible from the first part of the skin track. 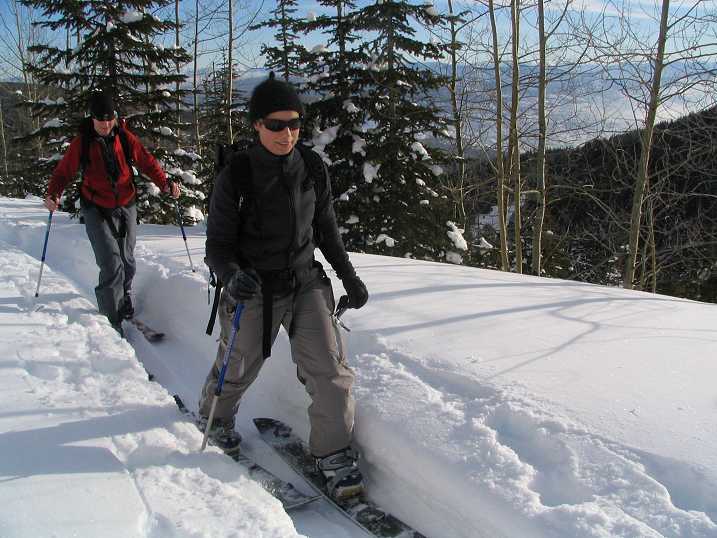 The skin track then cuts north west to some false flats where there is a good view of 50s Bowl and some other skiable terrain to the west. Here we find our first wind slab. Apparently the terrain does funky stuff to the wind and the prevailing north-easters that have made this area of the province so cold has wind-scoured a lot of the skiable (south east?) faces of 50 Bowl. There aren’t any naturals but there’s definitely a nice shiny glaze on the faces and on the ridgeline separating the south-east and north-east faces. We give that up as a bad idea and head up to the peak of Plewman.

Here is Old Glory to our backs as we head up to the summit. 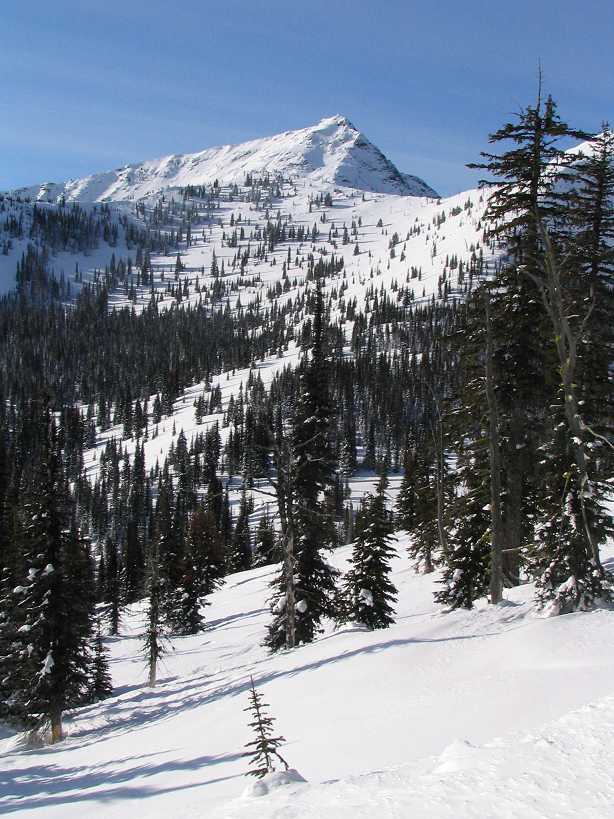 There’s a ton of windblow but no whumphing as we’re heading up. The skin track is not overly exposed. It’s strange wind-effect; a band of snow will be scoured and then just another 100 m later – the snow will be light. We clear out an old pit just before the summit on the slope we’re thinking of skiing. The slope’s about 28 – 30 degrees so it should be pretty safe and the pit results aren’t too bad either – needing about a 5 to go so we figure its good to go. Here’s Sharon coming down. 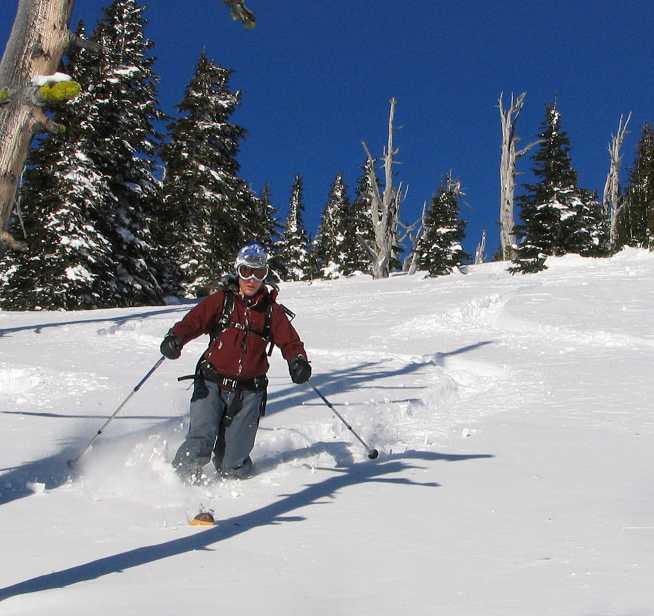 The snow is awesome and Plewman’s trees are beautifully spaced. Just when you think you’re going to get closed out; another bowl opens up in front of you. Here’s Aaron 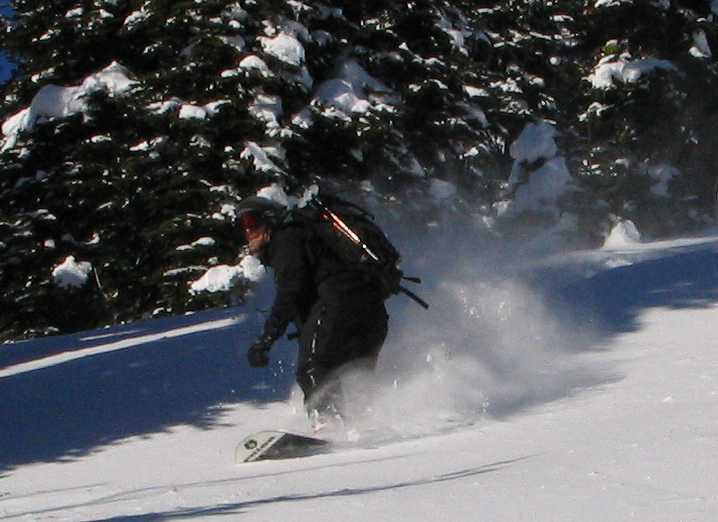 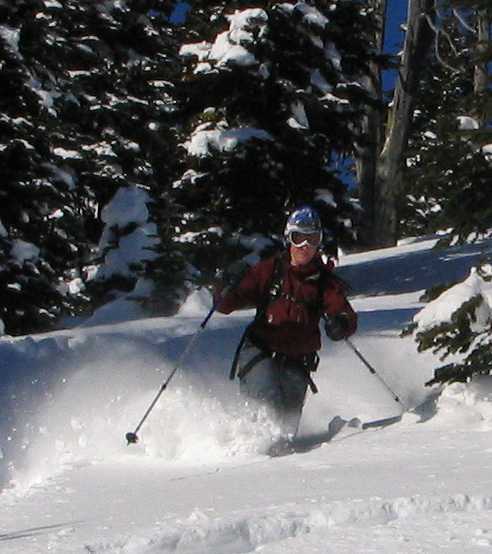 Now a sequence of Megan 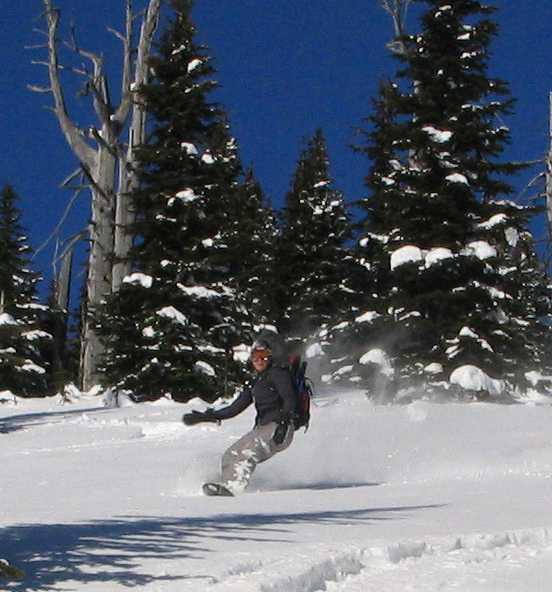 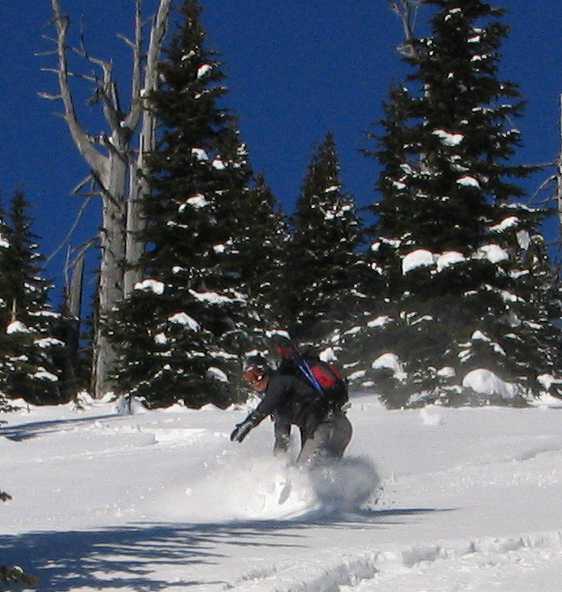 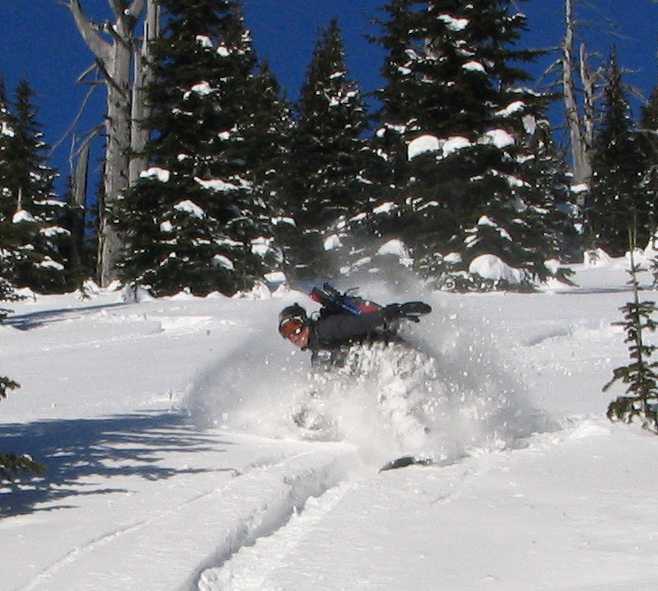 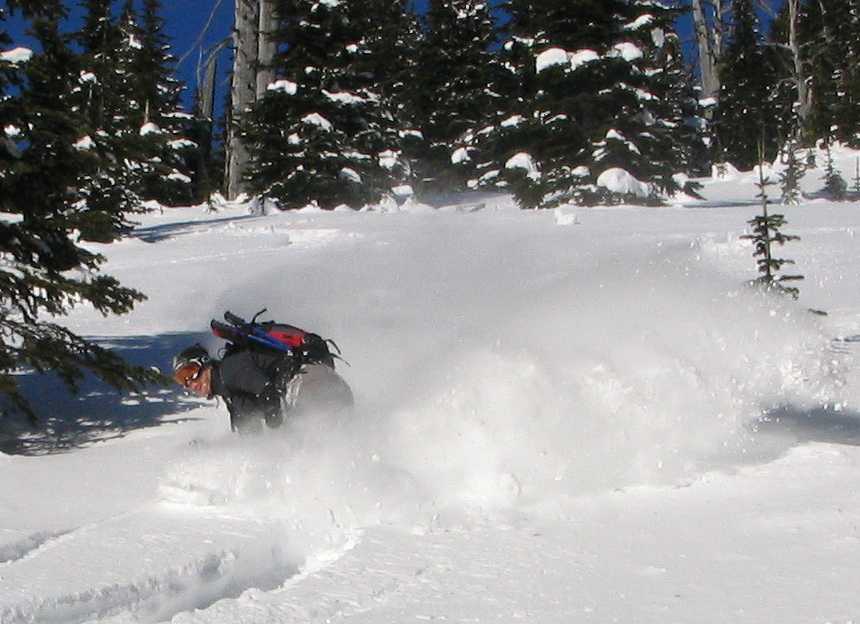 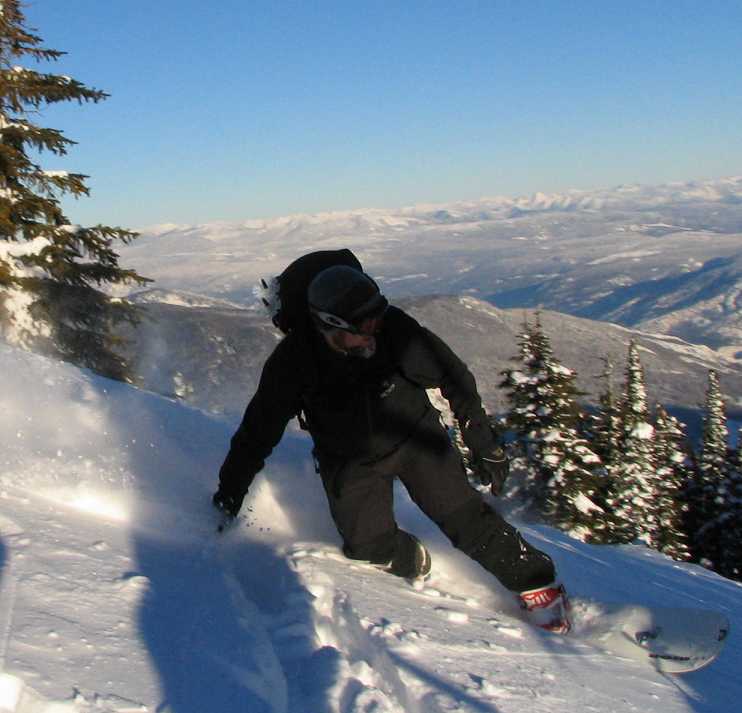 We have more then enough time to do another lap. This one’s just as much fun for Megan. 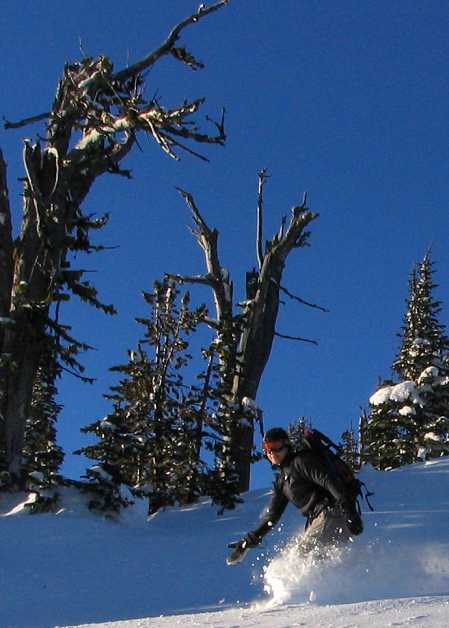 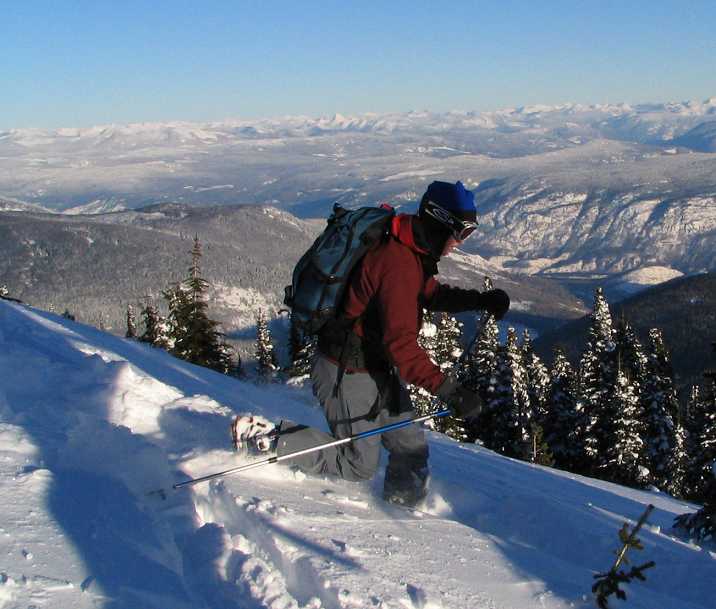 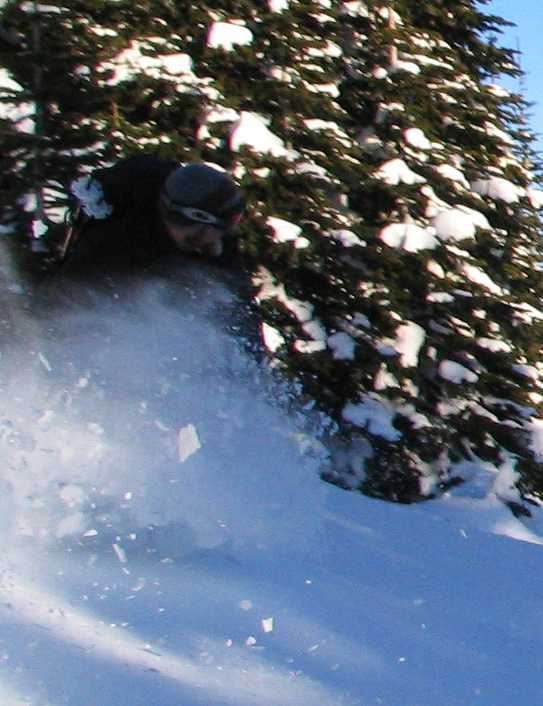 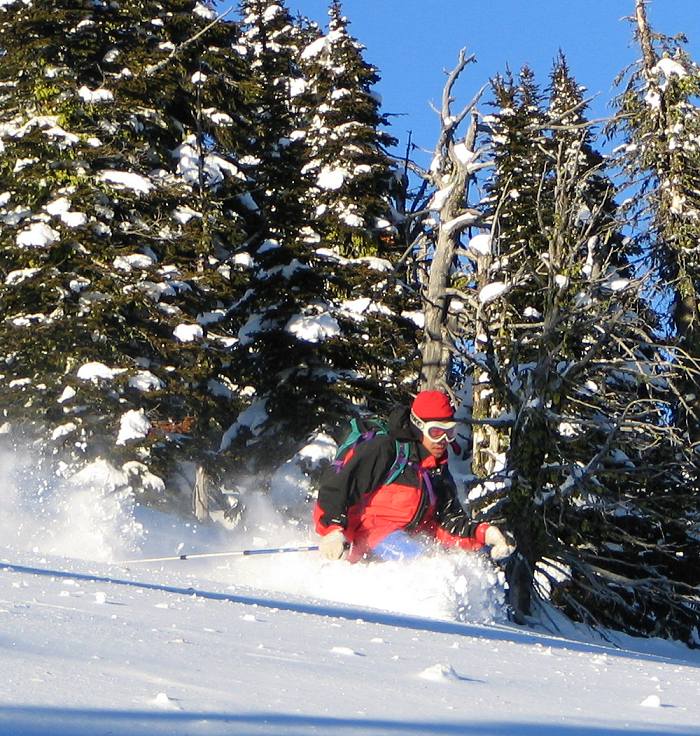 This entry was posted in 2005, ski and tagged plewman, rossland. Bookmark the permalink.