Mountain-bikers who still remember cantilever brakes and the oh-so-sexy red Judy DH as a revolution in suspension technology will remember the trails of Rossland from the first Kranked movie. Images of riders surfing steep, sandy gnar with roostertails of dust and smoke carving down big steep faces seemed so cool. Something happened after Kranked 1 and 2. “Free-riding” became more about stunts and forested woods then bikes imitating big-mountain skiers and Rossland seemed to drop off the map. Undoubtedly this probably relieved many south Kootenay riders.

Still, Rossland and Red Mountain were known to many Lower Mainlanders, particularly racers who made the trek to this periodic stop in the B.C. Cup circuit and to devoted lovers of singletrack who liked loam and the diversity of uncrowded technical trails. Despite the slow tired death of the B.C. Cup I have returned to Rossland many times to ride.

Trails in Rossland are, for the most part, maintained and built by the Kootenay Columbia Trail Society. This was not always the case. Some of the veteran Rossland builders now no longer build or maintain as the KCTS has become the dominant force in relation to Rossland trails. Incredibly, this small town and its outdoor enthusiasts have done what other towns and cities many times their size have been unable to do and have managed to organize themselves in such a manner that they have a full time paid trail crew, a marketing budget and maintained, gorgeous trails. Let me be clear that these are trails used by hikers, bikers, and all manner of users. If you want some insight into how this miracle of progressive thinking can happen (are you listening District of North Vancouver and West Vancouver??) do not hesitate to call or email Stewart Spooner of the KCTS at 250 362-5905 or stewspooner@telus.net.

To add to the superlatives, the Rossland trail network is incredibly accessible. Most trails can be ridden from your doorstep. This large, complex network is also diverse, there are freeride trails, shuttle trails, technical xc trails, rail-grade beginner trails,, the list goes on ….. the network’s diversity is rivalled only by Squamish’s trail network in this regard. To top it off, in 2005 the KCTS put in a trail that instantly became a classic. The Seven Summits trail received designation as an IMBA epic trail – a designation given to a “must-ride” trail, in that year. Seven Summits is purpose-built singletrack that builds on and links together a series of other singletrack and access trails to create 31 kms of singletrack trail.

Seven Summits itself traverses the Rossland Range from north to south, this range itself being an arm of the “mellow” Monashee range. Its name derives from the fact of the trail coming close to seven peaks, Mt. Lepsoe, Mt. Plewman, Old Glory Mtn., Mt. Kirkup, Grey Mtn., Granite Mtn. and Record Mtn. The more conventional way to do this ride would be to leave a car at the southern end of the trail and drive to the northern end. This would give you a 35km ride covering 1100m of ascending and over 2000m of descending and most importantly – an unheard of 15 kms of riding on alpine ridgelines.

The hardman or woman would ride this trail as a loop from Rossland and bag all seven summits on the way. I guesstimate that you would be able to make this a 55km ride, with probably 5km of hiking and 2600m of ascending and descending. I would highly recommend packing a headlamp and perhaps an IV for such a trip. Oh and do let me know when you try as I’d like to give that a go too. Our variation was not quite as gnarcore but a variation on the hard(wo)man theme as we drove from town to the northern trailhead then rode back to Rossland from the southern trailhead.

The trailhead starts at about 1600m. Coming from Rossland it’s before the Nancy Greene summit sign – you’ve gone too far if you see that sign. You can park at many places and then proceed to ride doubletrack about 3km to the start of the singletrack. As the day promised to get hot we started early. Here’s Dave, who just moved from North Vancouver to Rossland, and Sharon heading up the doubletrack. The well-signed trailhead marks the north end of Seven Summits. A view from the trail adjacent to the first summit – Lepsoe.

Continuining south along the ridge past Lepsoe towards Elgood Ridge and Elgood Peak. 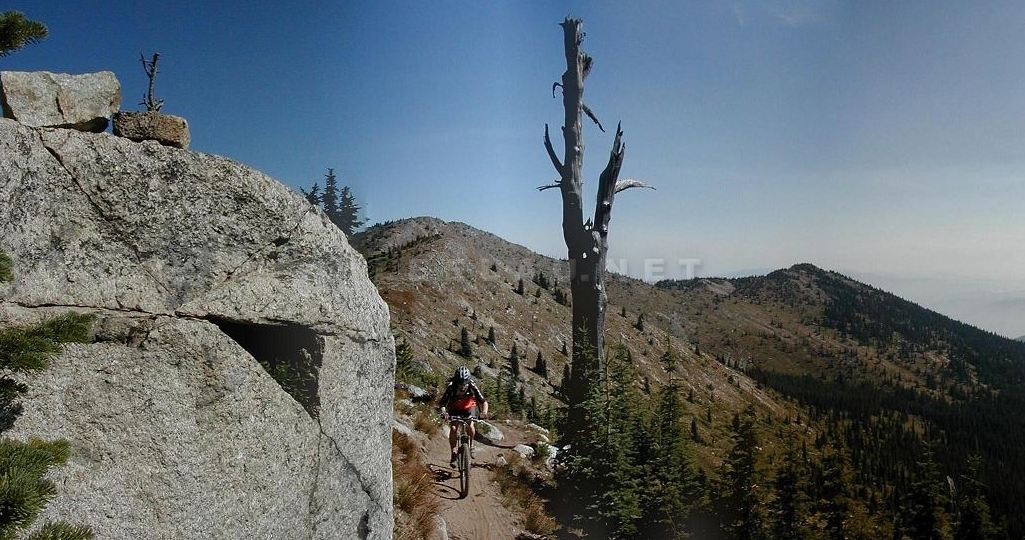 The lookout close to Elgood Mtn made a good spot for a break as we contemplated Mt Plewman and Old Glory to the south. The trail continues to the saddle with Old Glory in the background.

More views, this time of Elgood Ridge, as I head to Mt Plewman. We skied the slopes in the background in picture right in winter of 2005.

This is not an easy ride. There’s not a lot of downhill in the first bit. All the climbs are do-able although we were pretty shameless in going to granny gear as soon as it got steep. What downhills exist in the first part of Seven Summits, are sweet. It’s a cliche with alpine singletrack rides, but the challenge is in keeping your eyes on the trail while loving the view. Somehow Dave manages to do both. 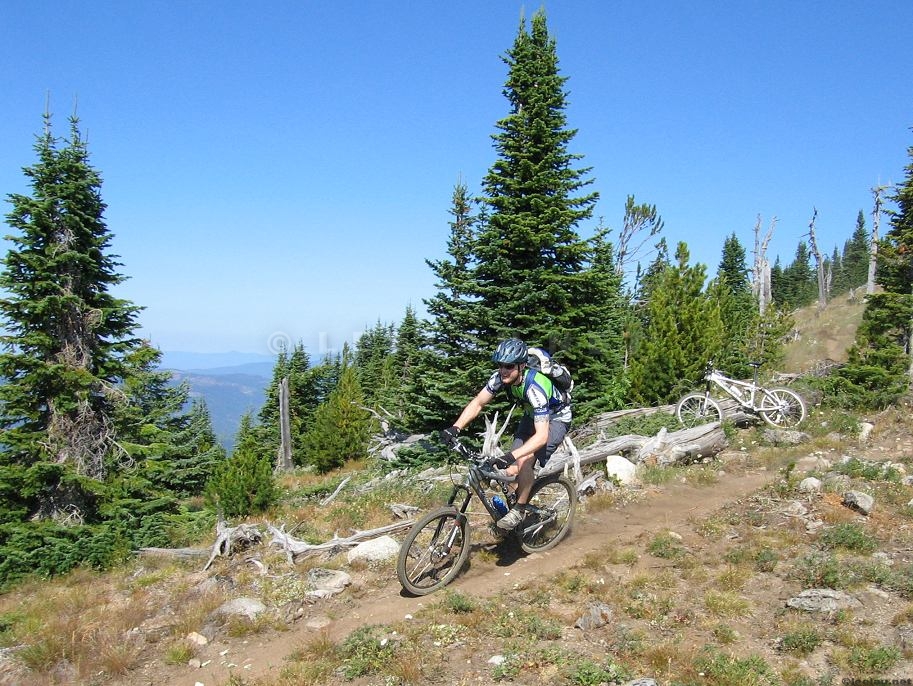 The view to Old Glory on the baby – butt smooth ripping singletrack of Seven Summits. This view looks SW. The scramble/hike-a-bike route to Old Glory is via the south flank. None of my riding partners were too interested in this option as the temperatures were already hitting 30 degrees. 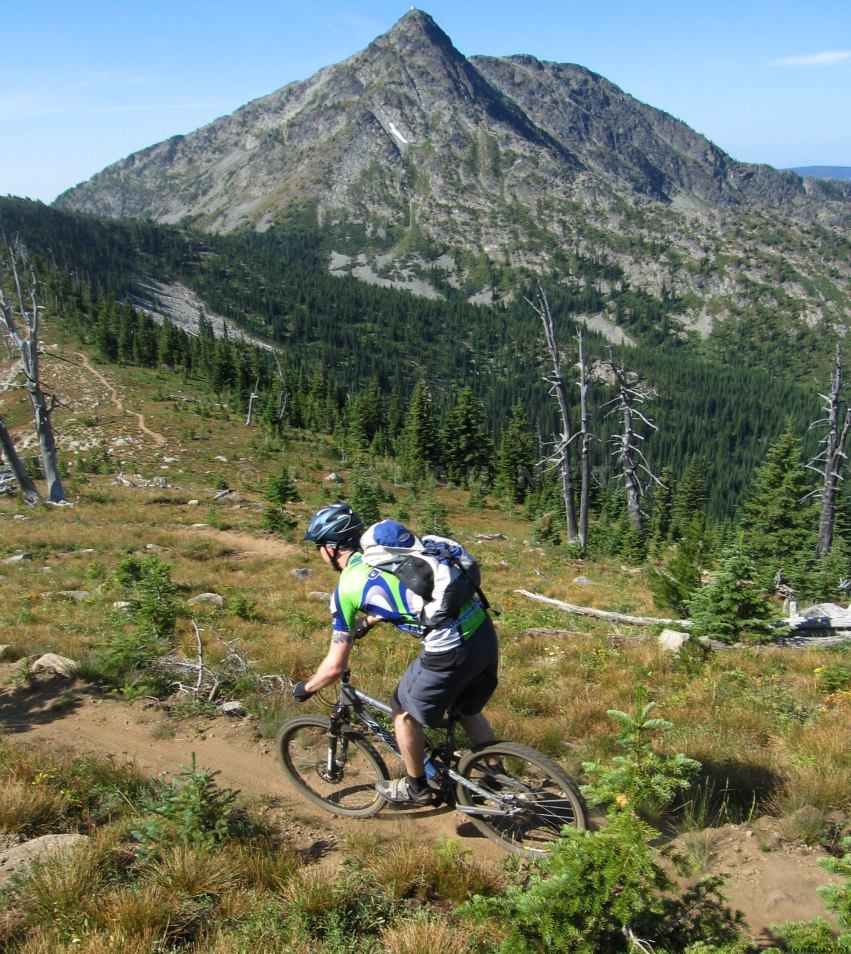 This looks SW to Old Glory from the switchbacks at Plewman – Old Glory col. The southern Monashees are the rounded peaks to the west on picture right.

Climbing from the col to Plewman Ridge. On the first part of Unnecessary Ridge climbing off Plewman Ridge looking north to the slopes of Mt Plewman. In winter, Plewman is a favourite locals ski touring spot; but a short 10 minute drive from town. The haze from forest fires burning in Northern Idaho make the peaks to the east look ethereal.

Descending off the first part of Unnecessary Ridge, Dave ignores the exposure and sends it.

Sharon descends to the Plewman junction. At this point you can take the trail heading east back to Highway 3 and then continue with another Rossland favourite freeride trail – Oasis. Oasis deposits you north of the town of Trail on the highway to Nelson so you had better arrange a shuttle beforehand. Not too far from the Plewman junction is another trail heading west to Old Glory. 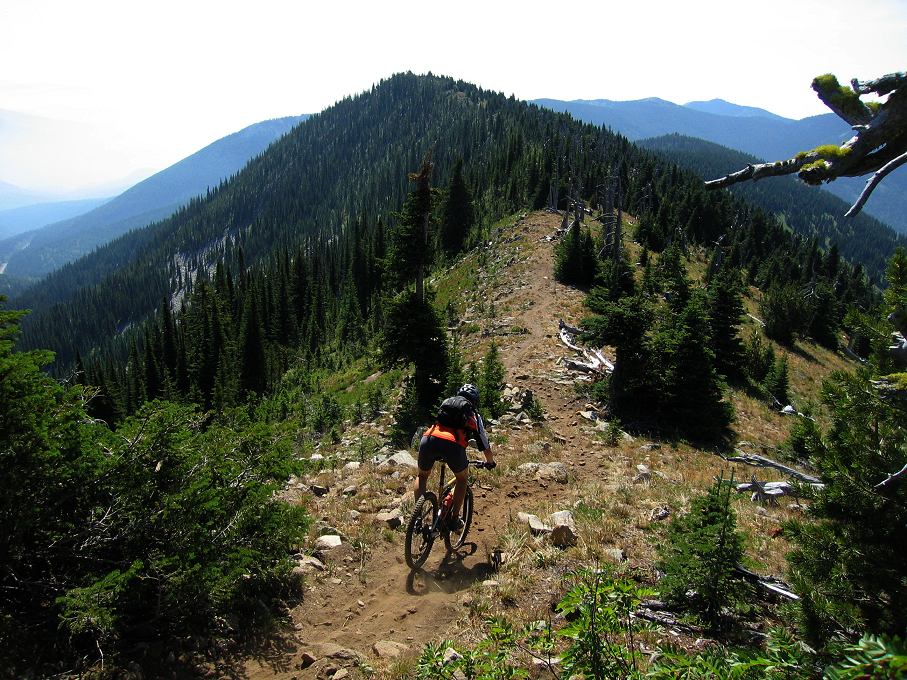 Now we start a nice long 3km descent down Unnecessary Ridge to the intersection of Seven Summits and the Old Glory trail (heading east – west).

The climbing isn’t over yet. We start another climb to another ridge line, this time in mid-day heat. Old Glory is in the background. Shortly thereafter we see the first other riders of the day. It’s a public holiday – one of the busiest days of the summer – and it’s taken us about 4 hours to see other mountain – bikers. These are not the crowded take-a-number trails of North Vancouver or Whistler.

Another descent brings us to Granite Mtn. close to the ski – hill at Red Mountain. Here is some prime Rossland ski hill real estate (the Yodel Hut) built some time ago. I’m sure there’s a story behind this. More climbing brings us to the top of Record Ridge. Sometime during this climb, the character of the trail changes. I have been declaiming the virtues of the diversity of the Rossland trails; in this vein Seven Summits changes its character as you traverse from north to south.

At the north point, there were hints of coastal rainforest particularly on west-facing slopes. Plewman, Old Glory and particularly Unnecessary Ridge were classic transitional sub-alpine forest. The sub-alpine and alpine trails were mostly loamy with some rocks and duff with more rocks making their appearance as we went further south. At this point on Record Ridge, on the south facing slopes, there are still wildflowers (why – when south facing slopes are warmer and presumably the flowers would have been fried?), the trails become sandier and much rockier and wild-grass, a hint of sage and brush replaces lupins, paintbrush and pine. It’s as if we rode from Vancouver, to Pemberton, then to the Okanagans all within the space of 35 km! 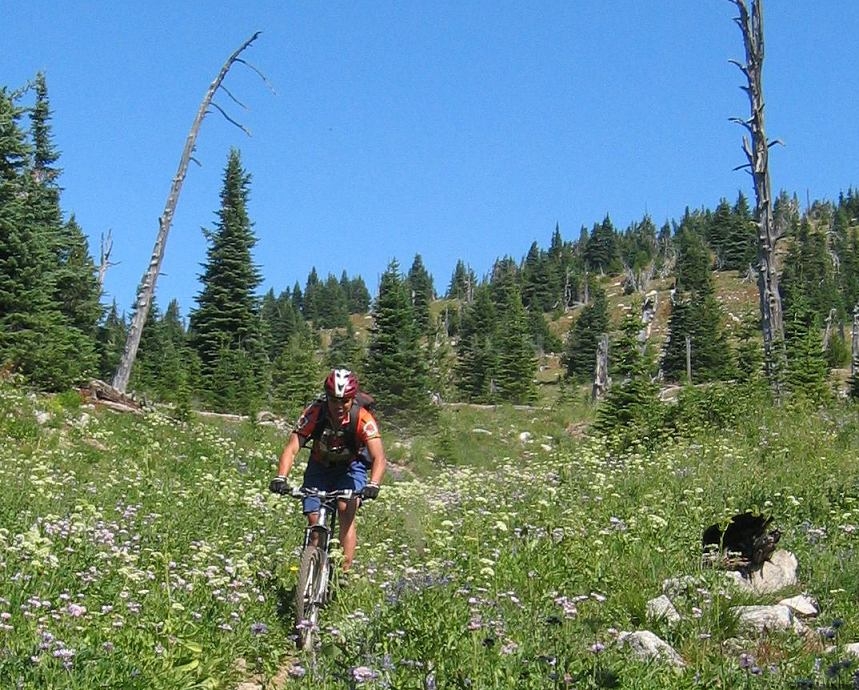 More descending off Record Ridge on a series of multiple switchbacks …. which then opens up into more meadows … then descends to wide-open singletrack As you break out of the remainder of the pine and fir forest the trail really opens up into grasslands, reminiscent of Chilcotin downhills. 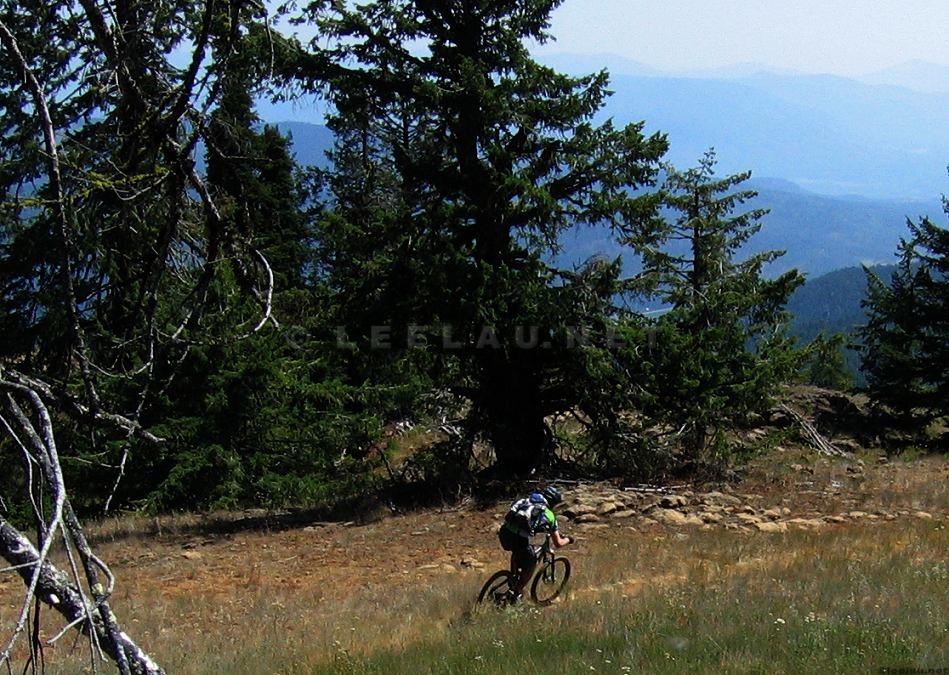 The view of the mountains hazy in the shimmer of afternoon heat reminds you that you’re still pretty high and have lots of descending to do. 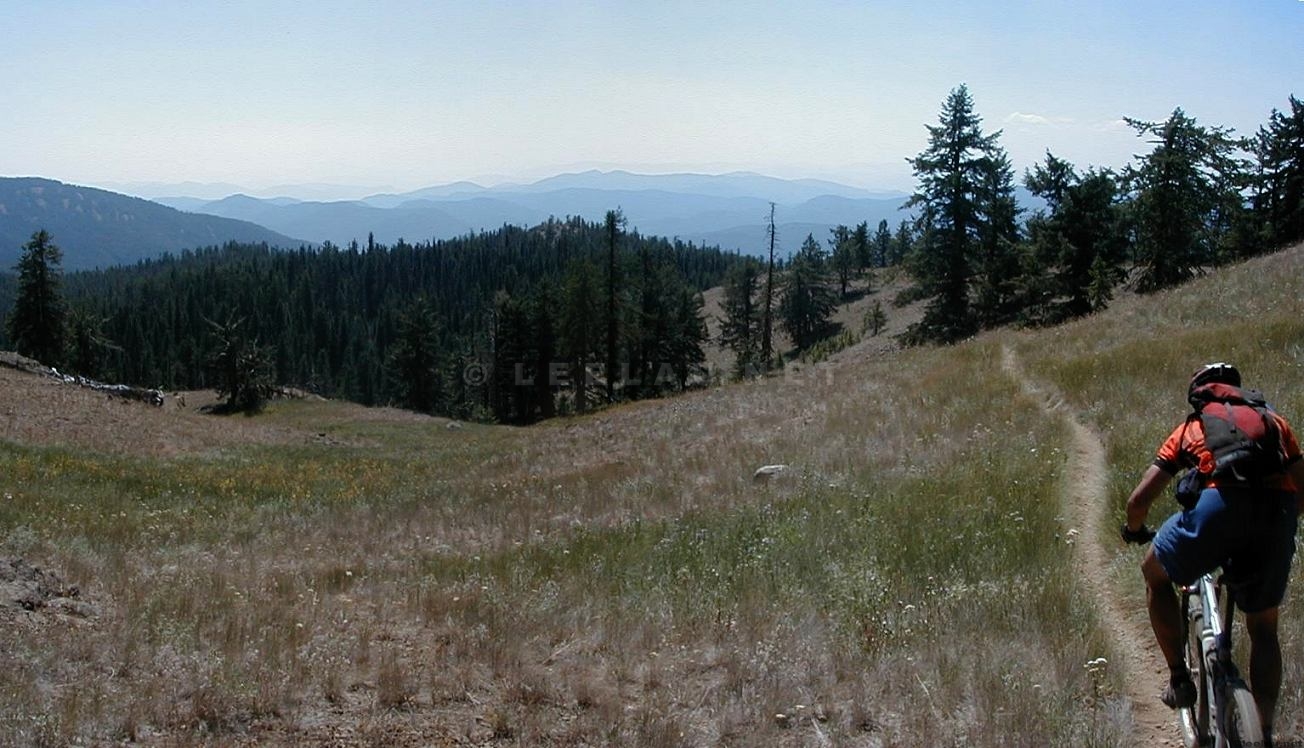 More then 600m of the descent over 10km is via the ridgeline from Record Ridge with the views below. The remaining 400m of descent over 5km is via the Dewdney trail; fast, dusty and loose but in trees. We ended up riding back to town on Highway 3A where temperatures on the road were over 40 degrees. A highly necessary stop at the gas station at Seven Summits Cafe to take in some well needed cold drinks and food gave us some life. To cap off the day, on the way back to retrieve the car we drove a little further and had a dip in Nancy Greene Lake – only a few minutes drive past the north trailhead. A well-deserved end to a classic day of riding in the alpine. The profile below describes the entire “softcore” route we did including the climb from the southern trailhead back to town. We took our time and took lots of pictures but even a fast group would set aside 4 to 5 hours for the ride.

Note that riding the entire route is a one-day commitment and that there is very little water on the route – bring lots of water on a hot day. There are bailout points on various parts of the route notably at the Plewman – Oasis trails; the Old Glory trails and the Grey Mtn – ski hill exit trails. Consult your trailmap for these exits. Once you start your descent off Record Ridge to the south trailhead you are committed and should be self-supported. You won’t find much company on this ride and a unfixable flat tire means a long walk.

If you have time, energy and water consider riding Doukhobor Draw and Drakes back to town; at east they are in shade. They are often ridden downhill so watch for traffic coming the other way. Let me be clear that the Seven Summits is not the end-all be-all of Rossland Trails. There are many other trails laid out in the KCTS trail map – there is freeride gnar, loamy singletrack, twisty- turny roller coaster like traills, trails with stunts, rail-trails all beautifully maintained and linked in a network that is signed and accessible by multiple user groups. Useful links for further information on Rossland and places where where we have actually stayed and eaten are as follows:

A poker ride is planned annually for the Seven Summits. A non-competitive fun ride, this year’s event takes place on August the 26th, 2006.

This entry was posted in 2006, bike and tagged KCTS, rossland, seven summits. Bookmark the permalink.