Shames Mountain is a little hole in the wall ski resort near Terrace, British Columbia. Located in a snow-zone in the North – Central Coast Mountains, this obscure little hills averages 12 meters (approximately 40 feet) of snowfall a year. Not a big deal in itself. I live in the South West B.C. Coast Mountains where that’s considered a reasonable snow fall and four meter snow packs are the norm. Admittedy, I am a bit jaded and have had the good fortune of having toured and skied big terrain in North America (travels through my home province of British Columbia, visiting the Canadian Rockies, touring in the Selkirks etc.). However, this resort serving a population of about 30 to 40,000 people (if one were to be generous) is smack-dab in the middle of the most stunning readily accessible terrain I’ve ever had the fortune of visiting.

To give one a sense of scale, the surrounding mountains are “only” about 1800m to 2000m high. Shames’ base area elevation is at about 700m and extends to about 1100m. The resort area is 144 acres and occupies less then 10% of their huge 8,730 acres of tenure. To put that number into perspective, Whistler/Blackcomb’s total lift-served area is 8,171 acres while Vail has 5,289 acres of lift-served terrain. Having said that, Shames is hardly Whistler/Blackcomb or Vail. Many might say that is a good thing. 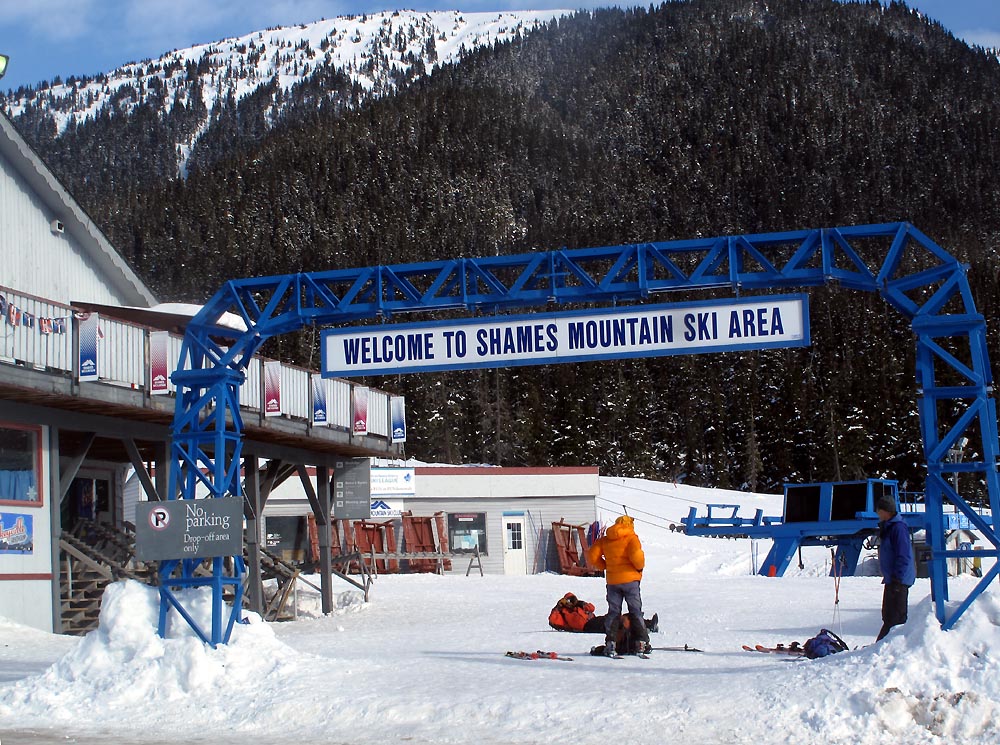 From the resort entrance you can see the Fay-zurs Chutes. They are about a 120m vertical climb with skins and a 600m run back to the bottom chairlift

Shames is currently for sale and there is some question about the continued economic viability of the ski hill. There aren’t enough skiers or skier visits to the area. There are no condos, no power to the ski-hill itself (diesel provides power), a small pub at the hill and not much in the way of the amenities that North Americans have come to associate with skiing. Shames is a pure, raw skiing experience with huge terrain readily accessible and a ton of snow blanketing nearby slopes. Currently subsidized by its board of directors (all enthusiastic snowsliders) one wonders when the well-spring of local well-heeled goodwill will run dry.

It will be a problem for the skier community in the Kitimat, Prince Rupert, Terrace and even Smithers area served by Shames if the hill ceases operations. Although about 25 to 30 thousand people live in the area (depending on how far you stretch the “area”); not many out-of-towners visit Terrace to ski, hence the scarcity of revenue. Those out-of-towners that do visit the area are often clients of Northern Escapes, Last Frontier or Skeena Heliskiing; heli-skiing operators with tenure in the surrounding area. Bad economic times have also crushed the formerly vibrant resource sector.Mining and logging activity is way down. Skiing and other recreational activities may not be in the budgets for travellers and local residents so there is some concern that skier visits may be further negatively impacted.

Even with an early bird offer of $ 199 for the seasons pass (regular passes are $ 681 for adults), a season that runs from December to March, and generous donations of materials from the local business community (building materials for repairs and construction, diesel fuel) the local population base of skiers is insufficient to keep the hill running in the black. That’s why Shames is listed for sale at the bargain price of Can $ 1,495,000 (or trades for a Whistler chalet and a few kegs of beer). 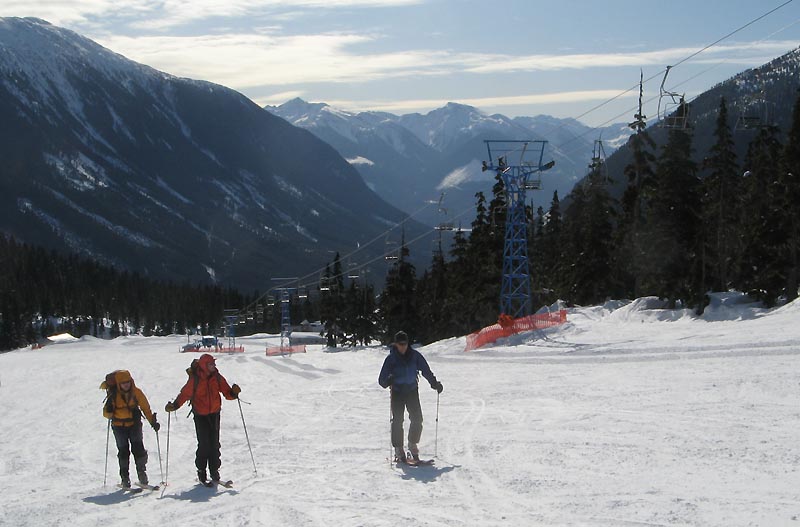 Skinning up the runs on Tuesday. Shames’ lifts only run on Wednesday to Sunday

That million and a half dollar price for Shames may not have attracted much interest as the listing is still in place since early last year. A good part of the reason for the lack of skier visits from out – of – towners might be Terrace’s relative isolation. It is a 15 to 20 hour drive from Vancouver. The main highway from Vancouver to Prince George then to Terrace via Smithers isn’t bad. It’s just a long drive.

Terrace has an airport served by two airlines; Air Canada and Hawkair. Air Canada’s stunning indifference to customer service and its propensity for losing luggage extends to its Vancouver – Terrace run and air-travellers are advised to bring as much gear as is possible as carry-on (particularly including ski boots). If at all possible, use Hawkair; which is a local company. Flight costs are comparable from both airlines and will run you about $ 500 return per person from Vancouver.

Even for backcountry skiers the ski hill is a priceless resource. The access road for Shames winds its way into the Shames River drainage and into terrain which might have inspired Tennyson to write “Cannon to the Right of Them, Cannon to the Left of Them … into the Jaws of Death, into the mouth of hell …” went the ski-tourers – so steep and intimidating are the mountains surrounding the drainage. Without that road, access would be a more lengthy process, starting at close to sea level and up logging roads. Once you get to Shames itself, the terrain is split by the Shames River drainage. To the north of the drainage itself is the Shames area and copious bowls. To the south is the

Happy Valley, Valley of Instant Doom and various other features such as Lola and Monkey Bowls.

This terrain is steep and, as mentioned, very accessible. This terrain also has a variety of aspects from which to choose. Most of the mountains around the Shames area start with plateaus at their base but couloirs and more moderate slopes that breach their steepness. The mountains are lined with ridges that lend themselves to traverses, and plastered with snow that falls with such vigour and volume that it carpets and blankets all. You get the idea. Shames is the Shangri-La of skiable, diverse terrain. Access combined with a variety of terrain and copious amounts of snow makes the Shames area and its backcountry a gem of North American skiing to be savoured and treasured.

Heading up to the Dome from the ski hill. This took us about 10 minutes of skinning. Geronimo Bowl is in the foreground to our west with Thunder then SuperBowl further along the skyline.

There are some downsides to having a lot of snow. You don’t get too many sunny days for one. Also the area is prone to getting moisture-laden dumps, hence the public dryer in the ski lodge. In our one sunny day, we did a short tour with a late start of 12 noon.

Our late start was due to having to rustle up gear for Francis, whose luggage had been lost by Air Canada. The ski hill wasn’t open and so lifts weren’t running. It was a quick skin up the open runs to the area boundaries. Exiting the area boundaries we headed to a small feature known as The Dome (1440m). From there you can look W to an endless series of bowls. The bowls are pictured below. The smallest bowl in the background is Thunder Bowl, which is what we skied today. Thunder Bowl is about the size of Flute Bowl (which is a large’ish sized bowl by Whistler standards. Geronimo Bowl is twice the size of Thunder and Super Bowl is twice as big as Geronimo. I counted 12 named bowls in the tenured area and another 9 bowls off the tenured area dropping back to the ski-hill access road. A busy day in Shames sees about a 100 skiers; the math is pretty staggering. I should emphasize that this is the slackcountry accessible terrain off Shames.

A one-way backcountry access ticket will run you $ 10. To give a sense of scale, getting to Thunder Bowl is a bit less then 2 hours.Getting to Super Bowl would be more in the 3 to 3.5 hour range. None of this touches on the touring on the other side of the valley; which the locals have named “Happy Valley” as a counterpoint to the “Valley of Certain Doom” – a name bestowed on the hanging slidepath valleys west of Shames by magazine writer Les Anthony. You can also get heli-drops at the top of Zola and Monkey Bowls and tour all day in the alpine leaving a 1000m vertical ski-out to the road for less then $ 80 a day

Sharon heading up to the Dome with the west Shames bowls in the background. The poetically named Happy Doom Traverse is across the Shames River valley.

We finished our day by skiing off Thunder Bowl, skinning up Cats then heading down back to the area by way of “Cold Sweat”. There is no shortage of choice in local tours, some of which are described in the Canadian Avalanche Association Skeena/Babine forum or in John Baldwin’s new guidebook. We managed to get out to Happy Valley itself for a day of wandering around in trees in graybird conditions. The rest of the week it never stopped snowing and we stuck closer to the ski area. There are also two huts in the area that are accessible to public ski-tourers, both maintained by the Mt Remo Backcountry Society. You can tour to both huts or you can also get dropped off at the top of a peak above the huts by a heli for a reasonable fee. Unfortunately, due to 80cms of snow falling in 24hours we aborted our planned trip to the Andersen Cabin. 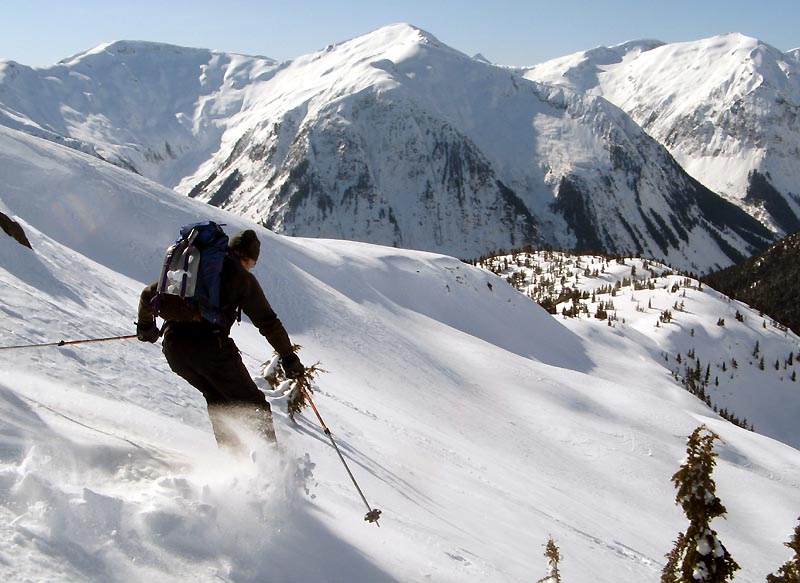 Brian drops off the Dome towards the ridge circling Geronimo Bowl

“Locals Only” types of attitudes probably would find themselves out-of-place in Terrace. The backcountry community is small. It’s tight. Everyone knows everyone else, they have more space then they can possibly use and it snows a ridiculous amount. They have it good up there, they know it and appreciate what they have. You’ll note in this article that I’ve not drawn too much of a distinction between inbounds skiers and backcountry skiers. It’s my distinct impression that many local skiers also don’t draw much of that distinction. Perhaps that is because of the ease of backcountry access from resort boundaries. Terrace/Shames is worthma visit. Any skier who appreciates big terrain and big snowpacks will love this place.

Sharon on the Geronimo Ridge looking NW towards the Kitimat Range and various generic icefields and summits that typifies the stunning landscape around Shames. 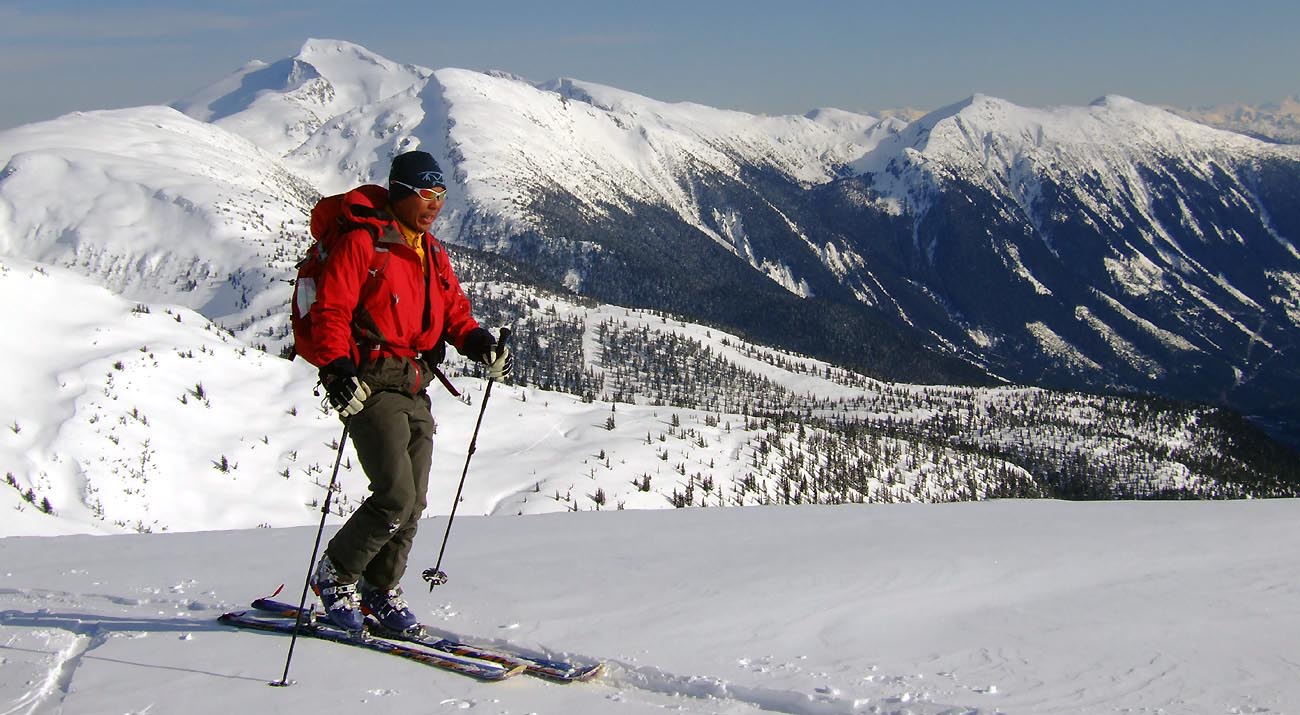 Lee on Geronimo Ridge – photo by John Baldwin. The ski hill access road can be seen far down in the valley of Shames River

Sharon leads the pack. The view looks east from the ridge surrounding Geronimo Bowl towards Mt Remo and the terrain east of Shames.

Lee heading on Geronimo Ridge towards the ridge surrounding Thunder Bowl The view looks NW towards the Kitimat Range. This area is heli-skied by Northern Escapes

Yet more stunning, staggering, scintillatingly scrumptious views of Shames backcountry. I am campaigning for the Shames River valley to be renamed the “Valley of Endless Gnar” for reasons too obvious to state.. 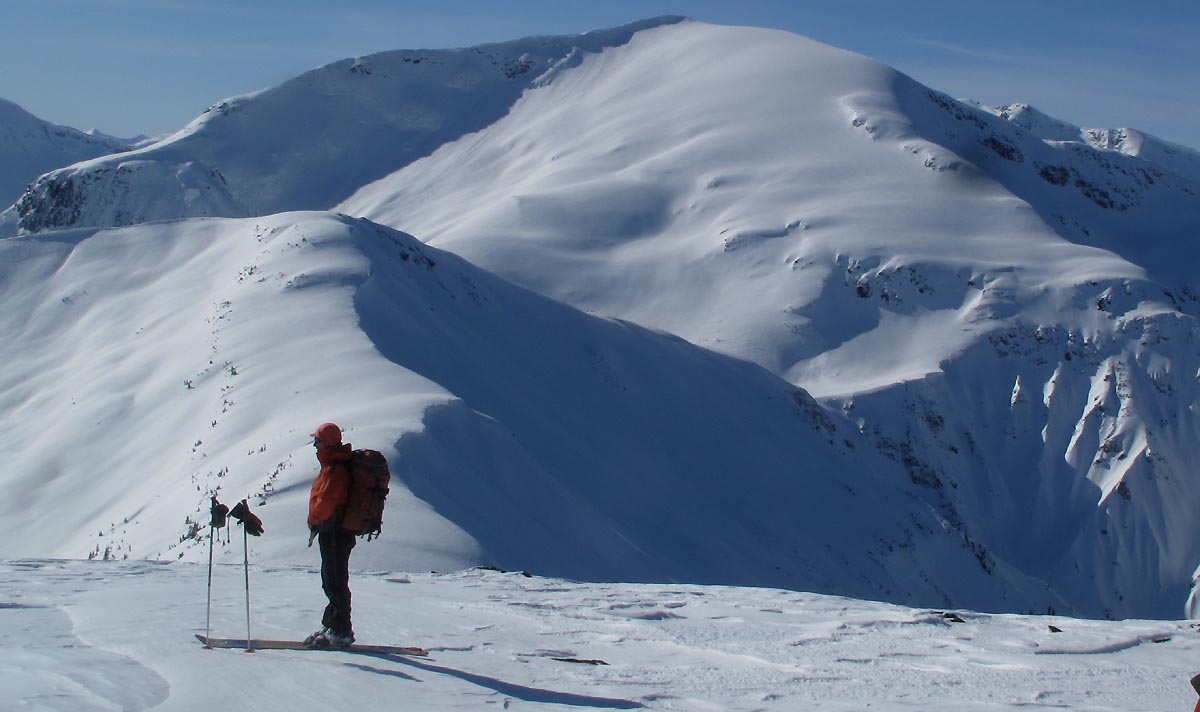 John hanging out and looking onto Thunder Bowl. The entire expanse of Super Bowl lies before us but it is still more then an hour to get there – the size of that bowl is deceptive.

Linda traversing a step before crossing from Geronimo to Thunder Bowls 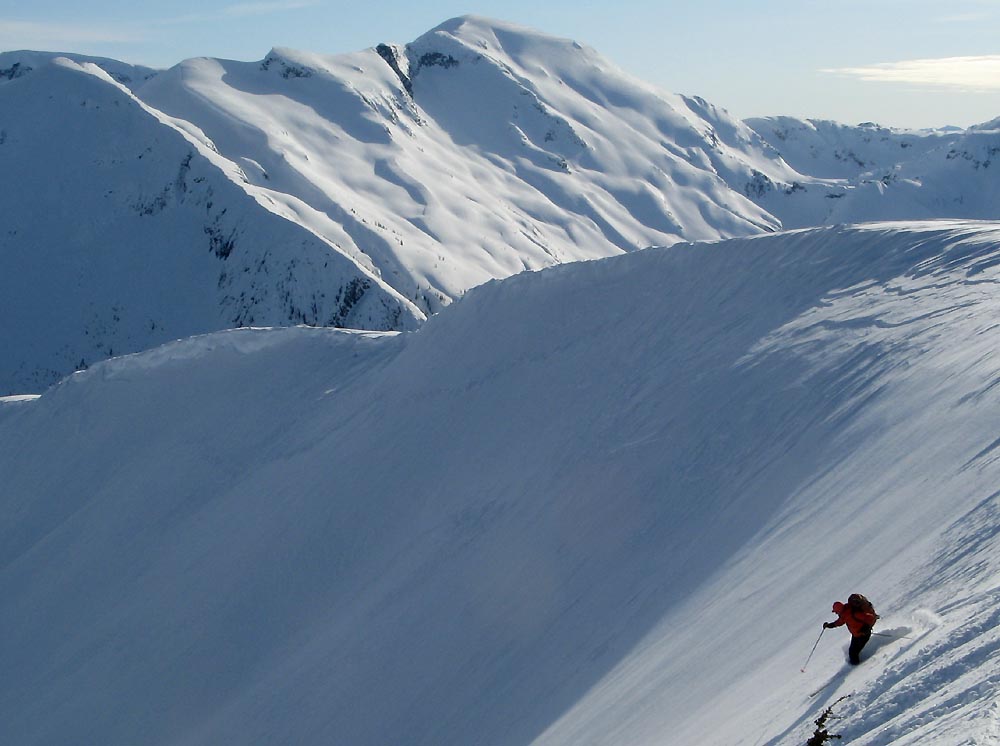 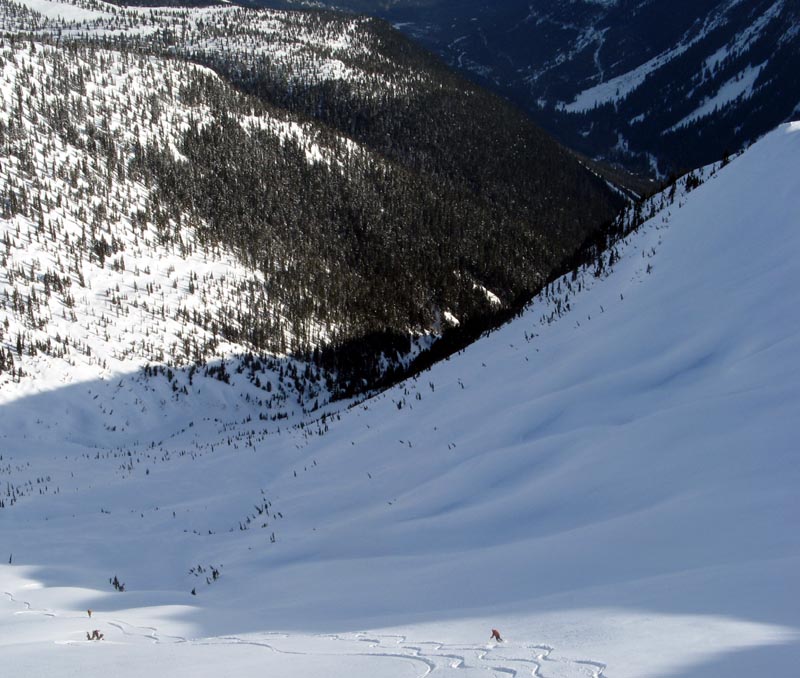 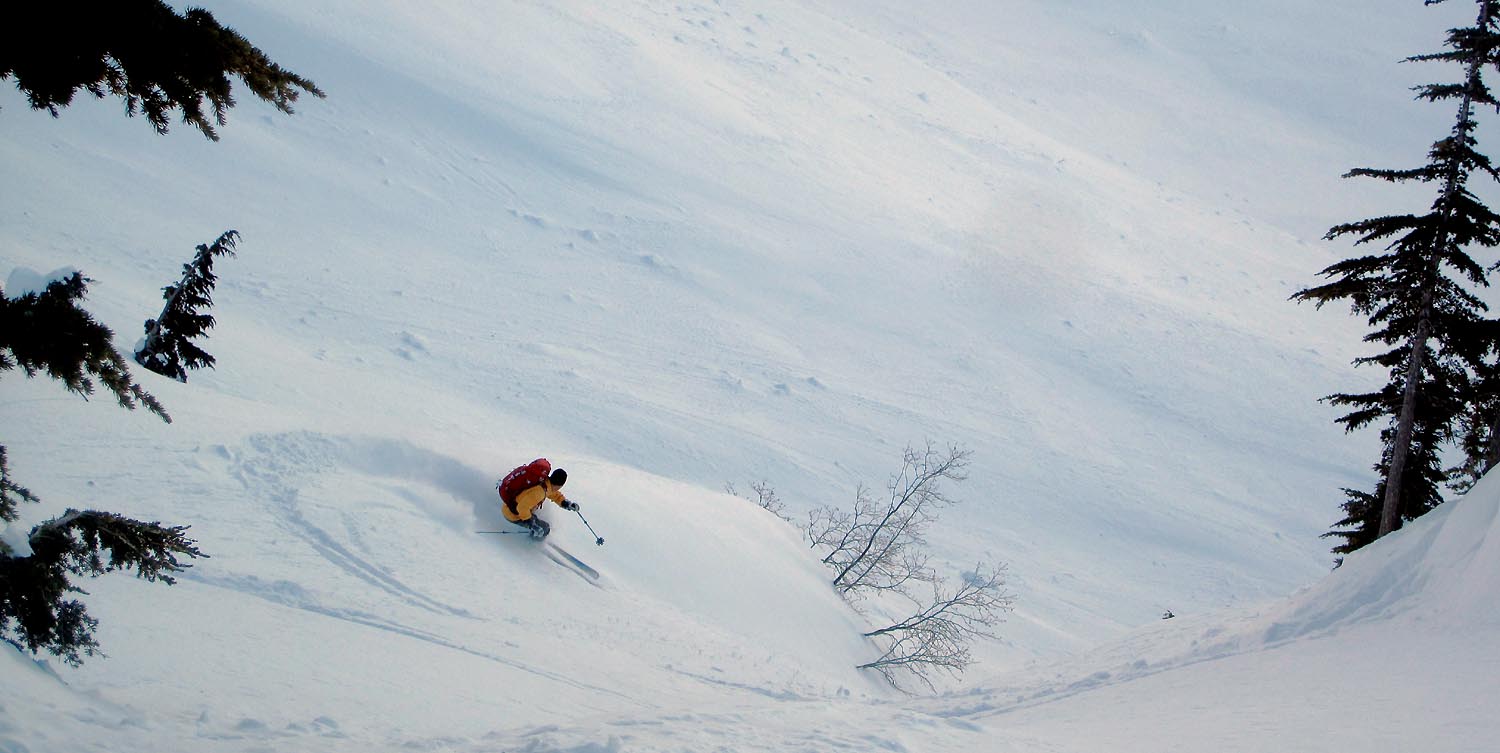 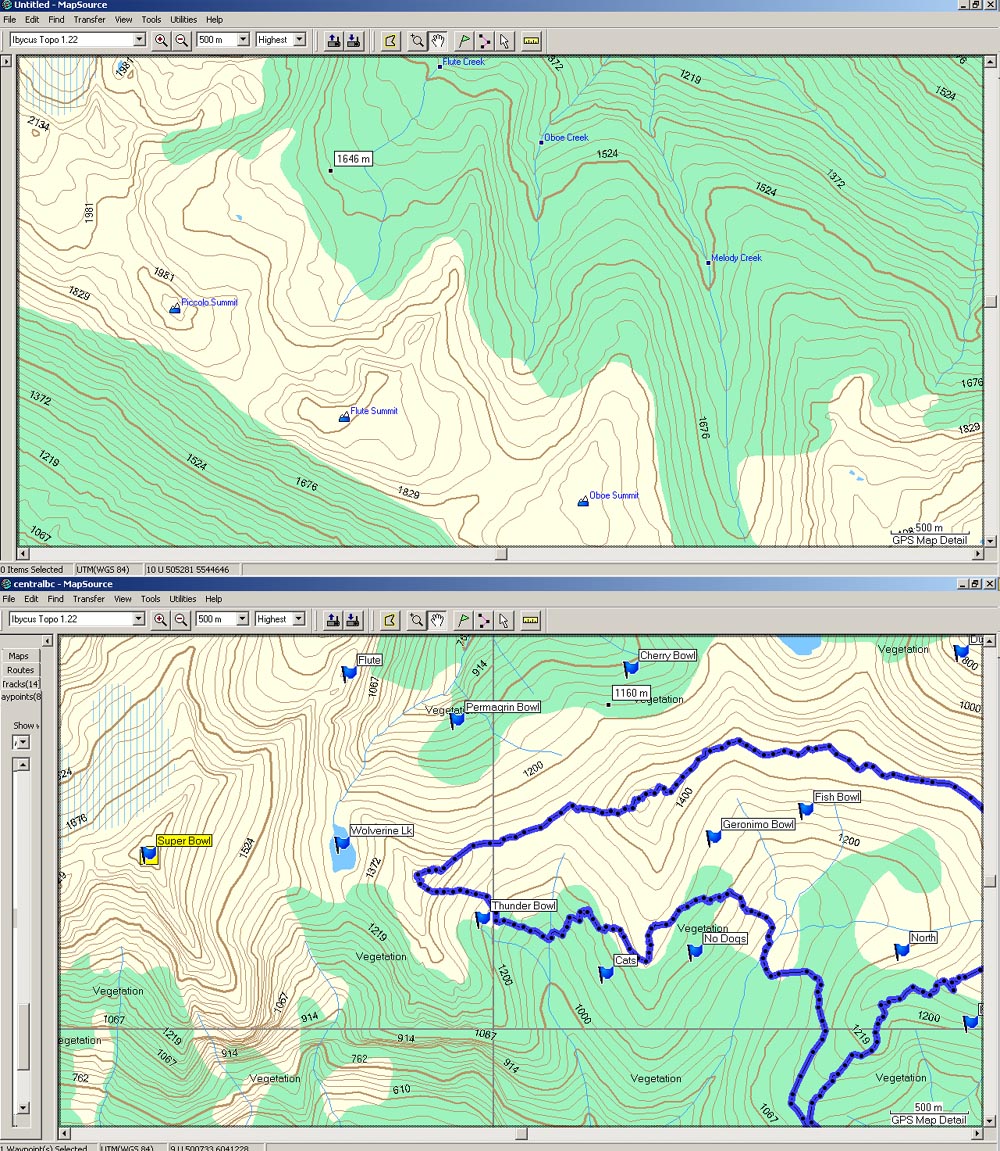 This map compares a portion of Shames’s backcountry to the Whistler terrain area.

More Shames but this time its closed on March 13, 2009 from Lee Lau on Vimeo.

This entry was posted in 2009, ski and tagged central bc, Shames, Terrace. Bookmark the permalink.