Across the water – west of Bowen Island – in the far reaches close to darkest Gibson lies the Sunshine Coast. Home of some buff, sweet singletrack and land of un-ending jumps we go to hunt trails.

The area is lousy with trails.

We start off riding up the ferry road to the Sprockids mountain bike park. First we start with a climb up Sidewinder; mostly uphill bench-cut singletrack but its a hot warm muggy day and I’m thankful for the shade and the odd downhill section. Here’s Tyler cooling off on a small jump on Sidewinder. 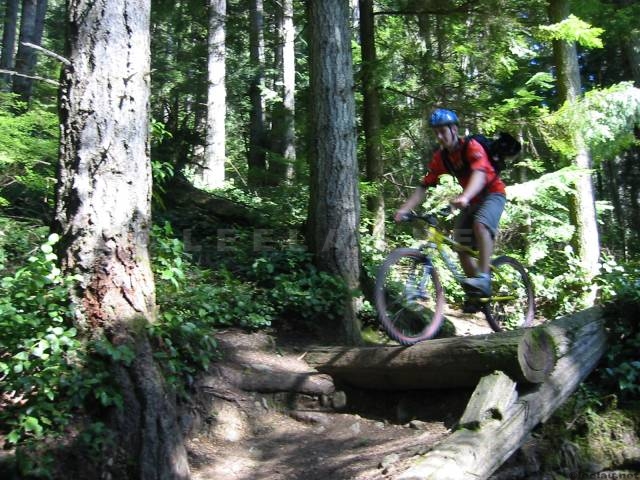 Then we cross on to Route 102 and up through the Japanese Camp. Here’s Bryan, Al, Audrey, and Esterlize crossing the creek near the camp. 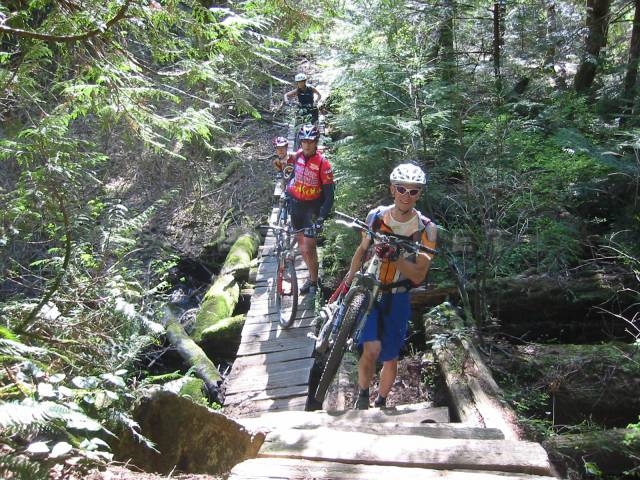 After a brutal grinding climb up Section 102, off we are on to Section 103. Lisa rides a ground level skinny 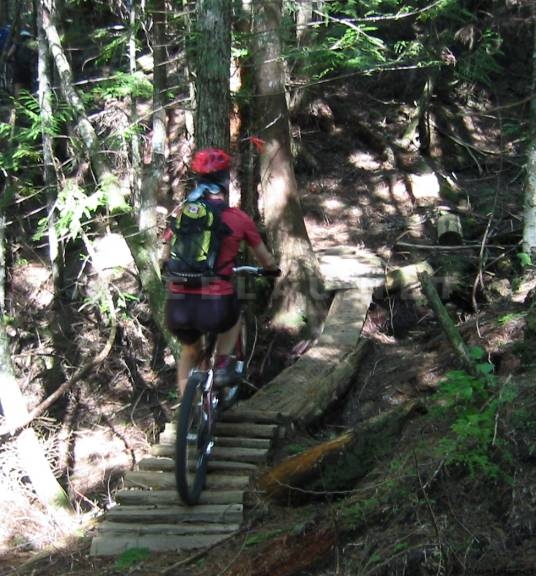 Brian on Route 103 booting down the downhill section. 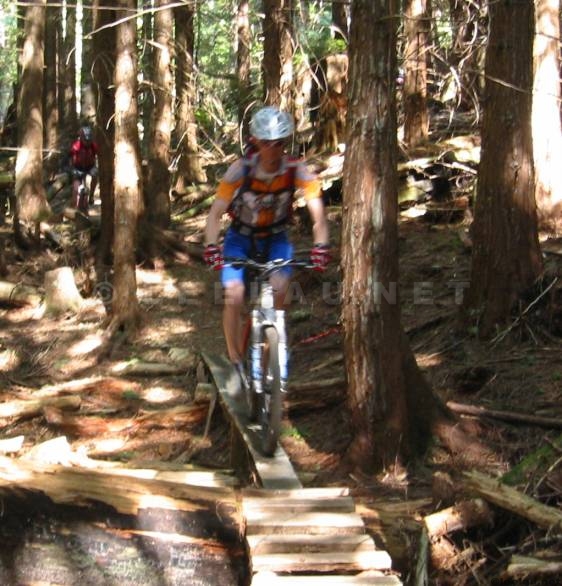 Then at the end of Route 103, there’s a small jump before we enter the more downhill-type trails. Tyler on the jump 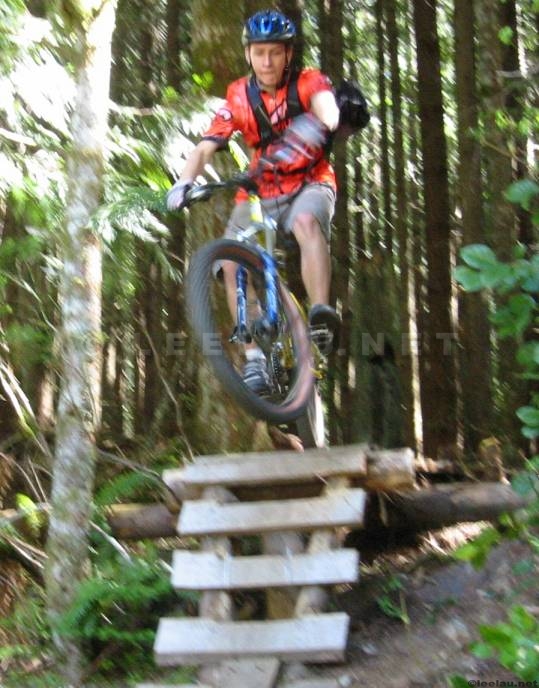 Then we’re off down a trail with jumps all over the place. Its the first turn to your left after going down the B & K after exiting Route 103. My pictures didn’t turn out for any of those jumps so I had to be content with taking some shots of a hip at the exit of the trail. Here’s Dave Wicks taking off. 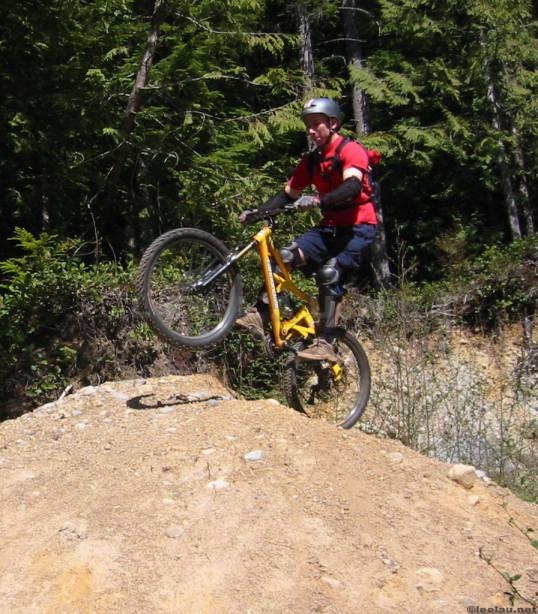 and Tyler in mid-flight 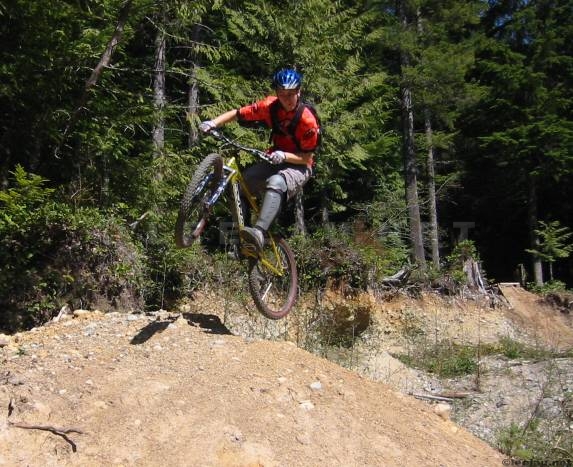 Off we are down Janet’s Jungle – another fun trail with some small to moderate size jumps. Here’s Peter getting some space between ground and tires. 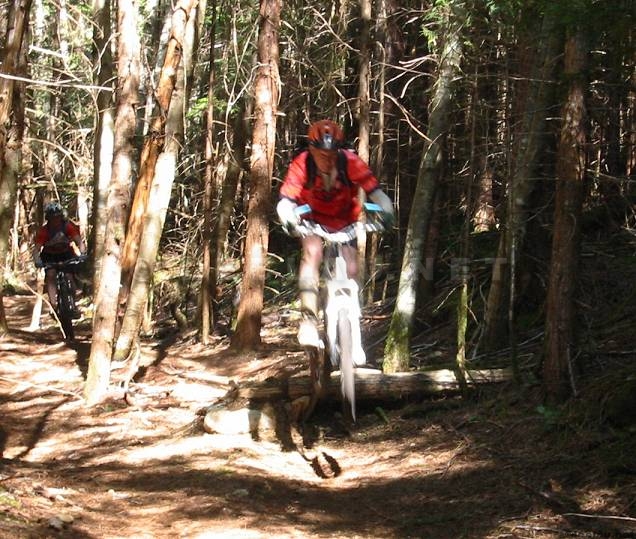 Al on the same trail 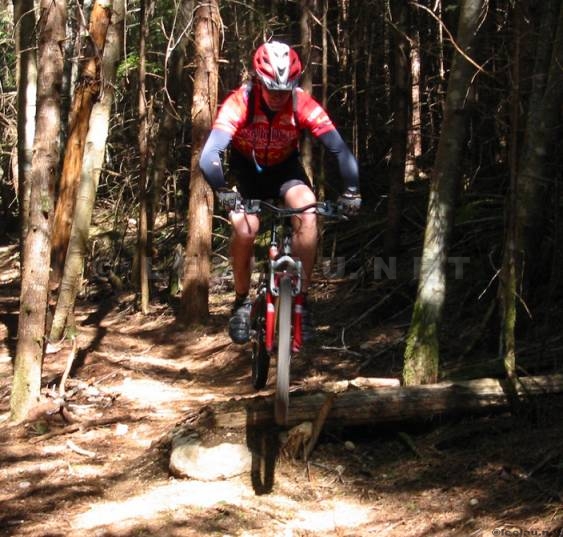 Tyler on a large jump to a flat tranny in mid – trail. 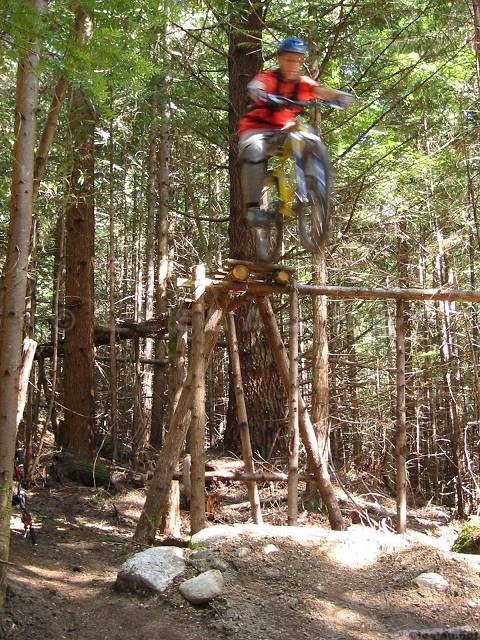 Marcus at the end of Janet’s Jungle 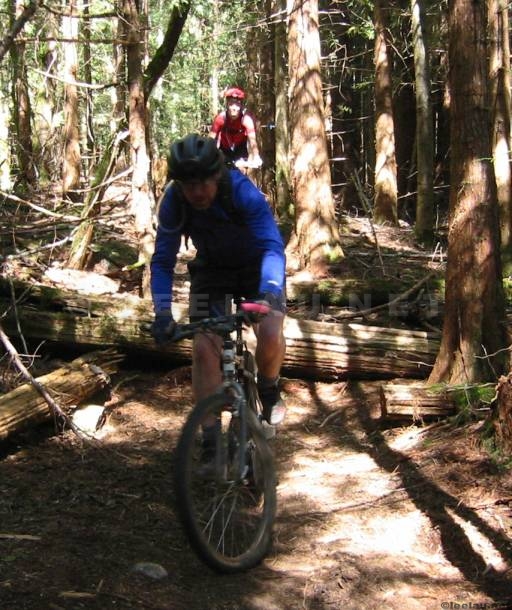 Audrey on the same section 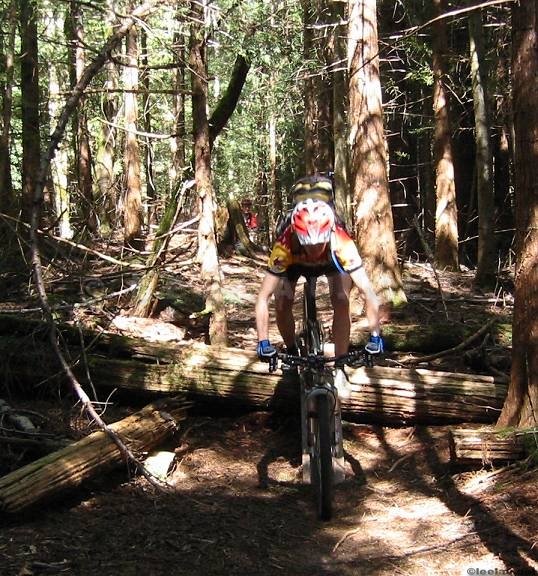 Peter with the crazy setup looking comfortable on an a-frame 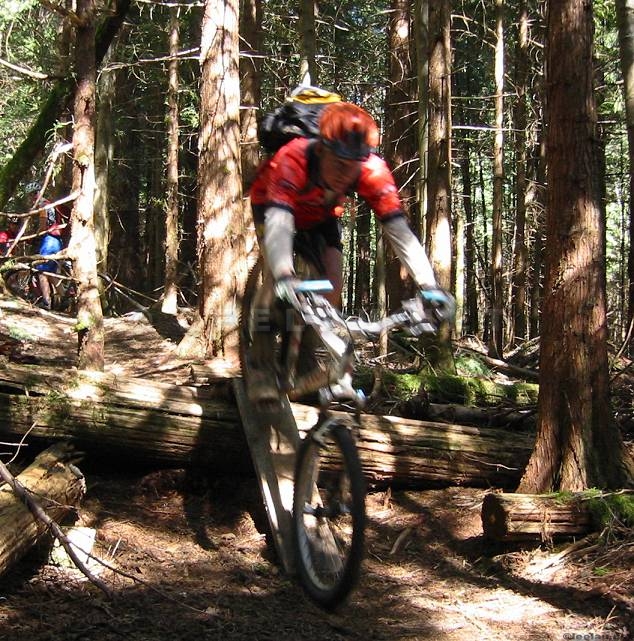 Brian getting a little bit of air 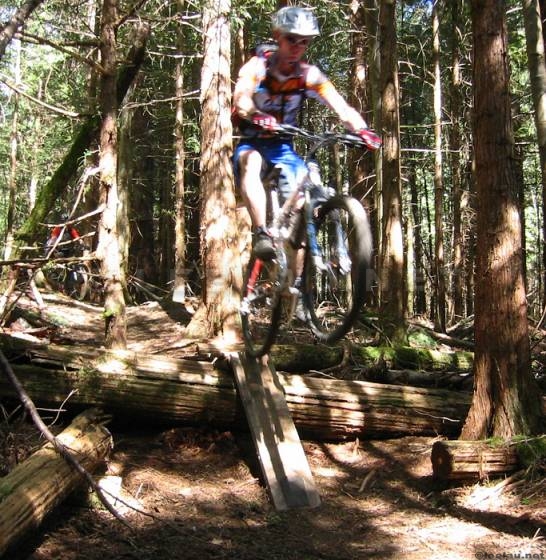 The second part of Janet’s Jungle has a few moderate size jumps. Dave Wicks makes short work of the jumps. 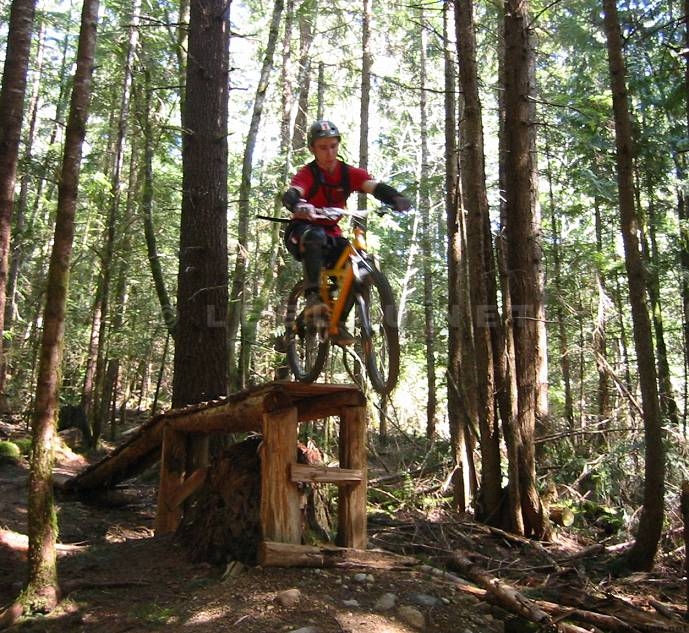 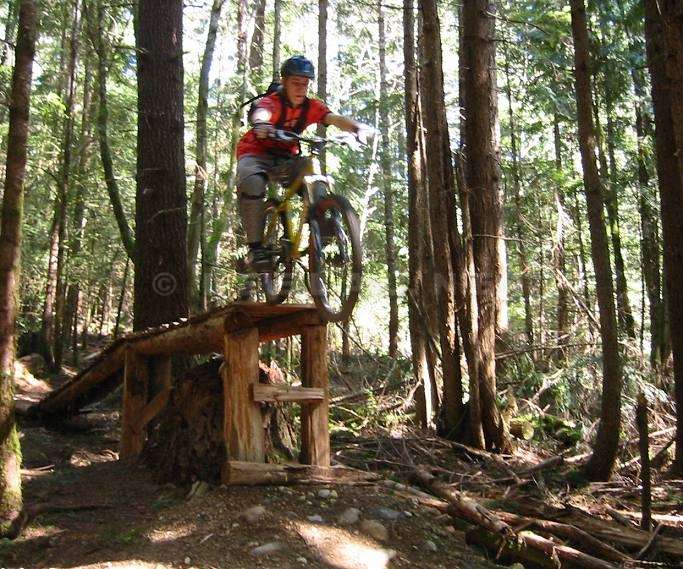 Then we’re on to Cunning Stunts. I wish I had a little more time but didn’t get a chance to take many pics of the crazy, bombproof stuff on this trail. There’s a reverse-totter, a discombobulator, lots of nice skinnies, a swivel totter and so many features to play on. Here’s Tyler on the swivel totter. 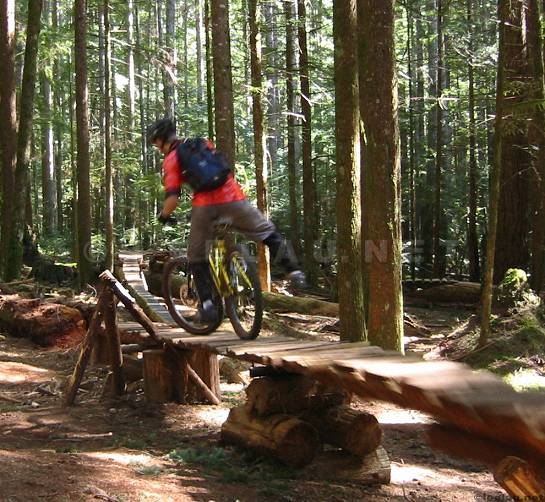 and Tyler pre-falling off the swivel totter 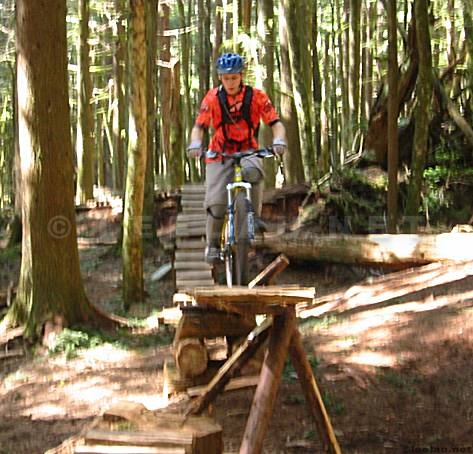 We rode back to the ferries and the last members of the group made it on literally seconds before the ferry doors were closed. Whew – what a day!

This entry was posted in 2004, bike and tagged ssc, sunshine coast. Bookmark the permalink.