It’s very hard to find people who want to get off the beaten track. I’ve lost count of how many times ride partners have ceaselessly whinged when a trip goes a bit wrong or the route isn’t quite as easy as it was or when you get blindingly lost. As I found out on our Shulaps epic when we got staggeringly lost, Pat and Zdenek are not like that at all. So when they invited me on a “little trip” they planned in the Southern Chilcotin, I knew they would be like-minded travellers and immediately accepted.

Our trip turned out to be a 3-day “mountaineering” mountain bike adventure, where we covered a total of about 90km, gained about 4000m and descended 4250m. The outdoor gods smiled on us, we had perfect temperatures, good visibility, almost no mechanicals, never got lost and the bugs weren’t even that bad for this time of the year.

Pat’s pictures and stories are here.

All pictures in this story are either mine, Pat Mulrooney’s or Zdenek Manhal.

Our route for the first day is below. More detailed maps of this area are here. Once you cross Iron Pass an excellent map from Trailventures BC can be bought from their site – a must have for Chilcotin travellers. On Day 1 we covered about 31km over 9 hours and 40 min. Elevation gain 1496m. Descent 962m. 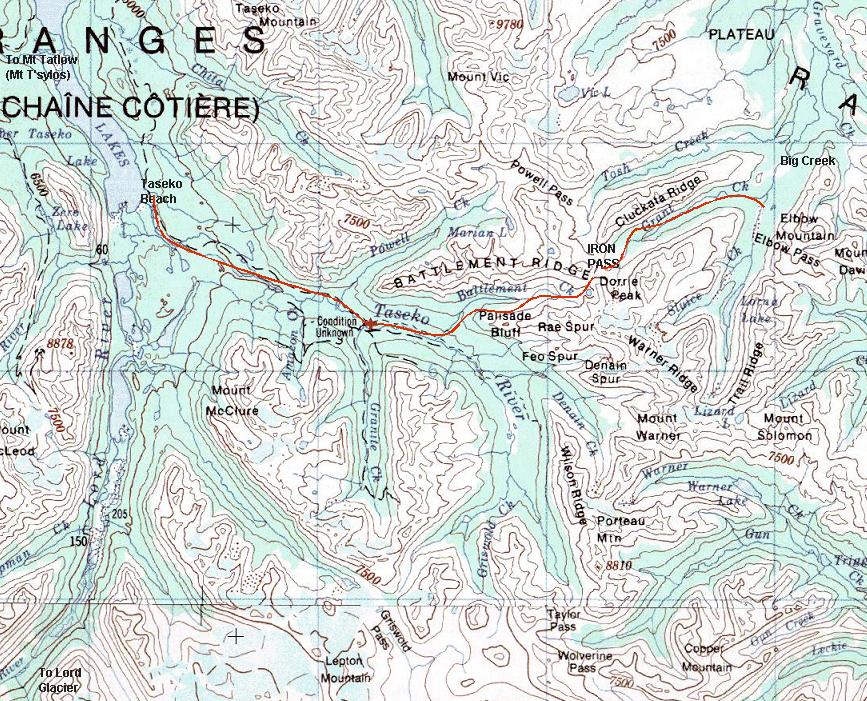 After a trip from Vancouver, through Whistler/Pemberton and up the Hurley we’re safe and sound at the Friburg FSRS and packing the morning before waiting for our floatplane. 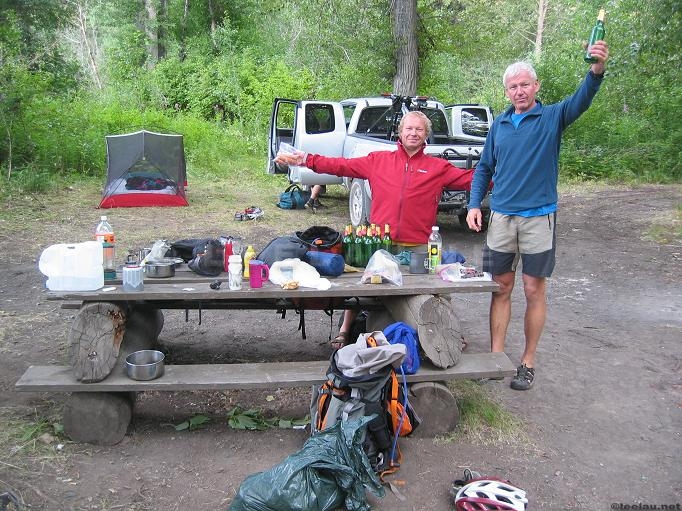 Tyax Air takes its first flight of the day. 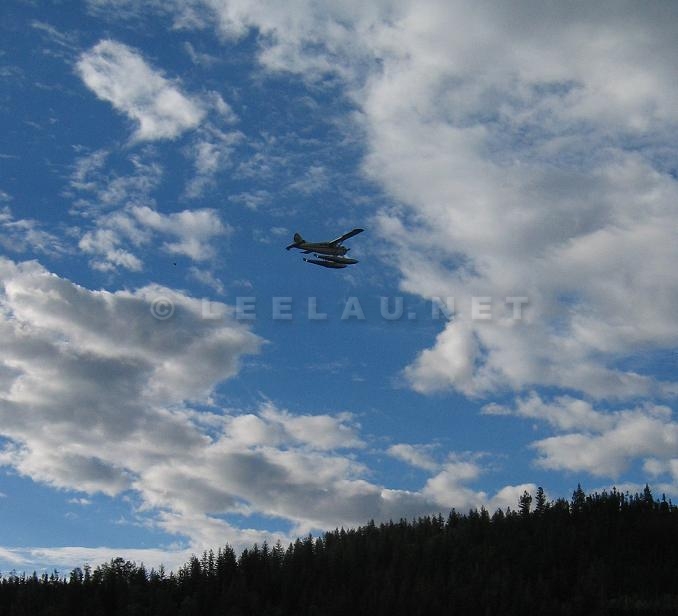 After Dale ferries his first load of passengers, its our turn. 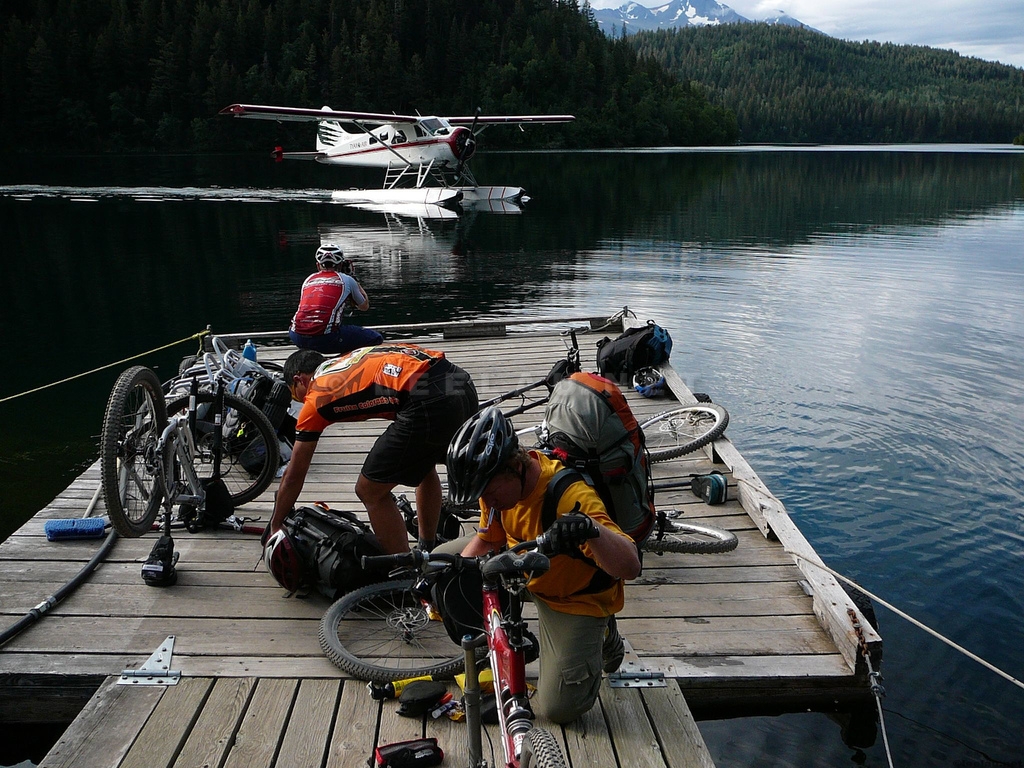 Our pilot, Dale, kindly flies us over Iron Pass so we can scope it out. Right now we’re flying at about 3000m and are just due west of the pass. Dale tells us that he doesn’t know of many people who’ve done this on bikes but we can spot a trail down below! 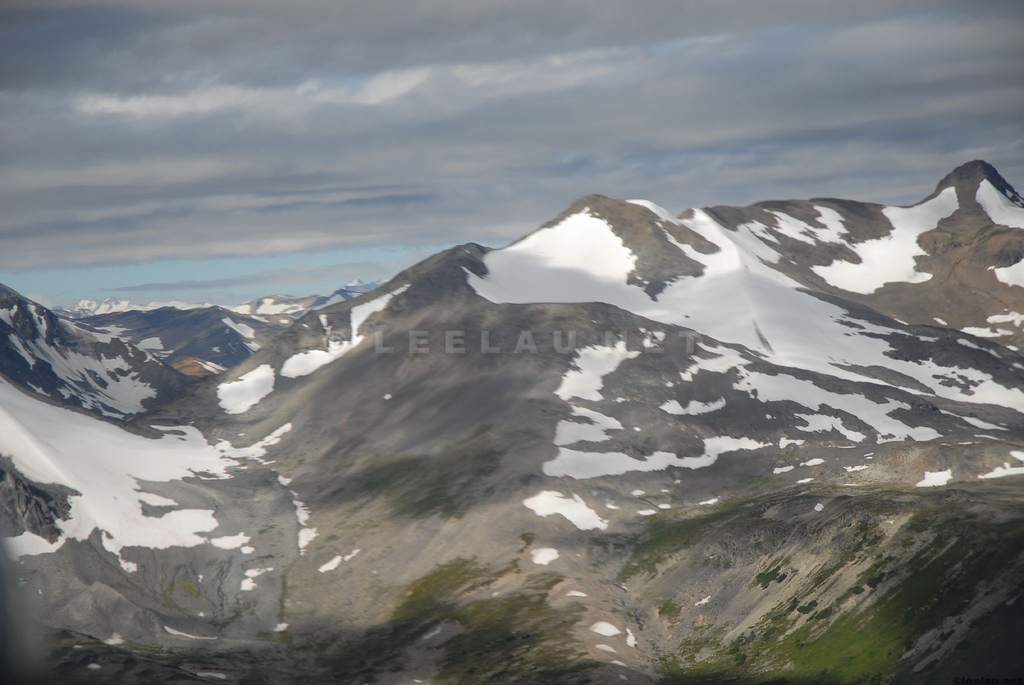 Our first glimpse of Taseko Lake approaching from the east as we’re over the Taseko River valley. Mt Tatlow/T’sylos (3063m) is the spiky large black peak in the distance. Mt Olson (2882m) is the peak dead ahead and RCAF Peak (2887m) is the peak on the left/south end of the lake. From bivouac.com

– “Tatlow holds a culturally important position for the native population of the Nemaia valley. They request that NO climbing take place on Tsylos and its neighbouring peaks. BC Parks imposes the same restriction in its parks plan. History: Chilcotin native tradition further holds that it is unlucky to look straight at this peak, and even worse luck to point at it. It is considered a “weathermaker”. More lore of Tsylos can be found in Terry Glavin’s excellent book, “Nemiah: The Unconquered Country“

Touchdown! Lake is glassy smooth with no winds. 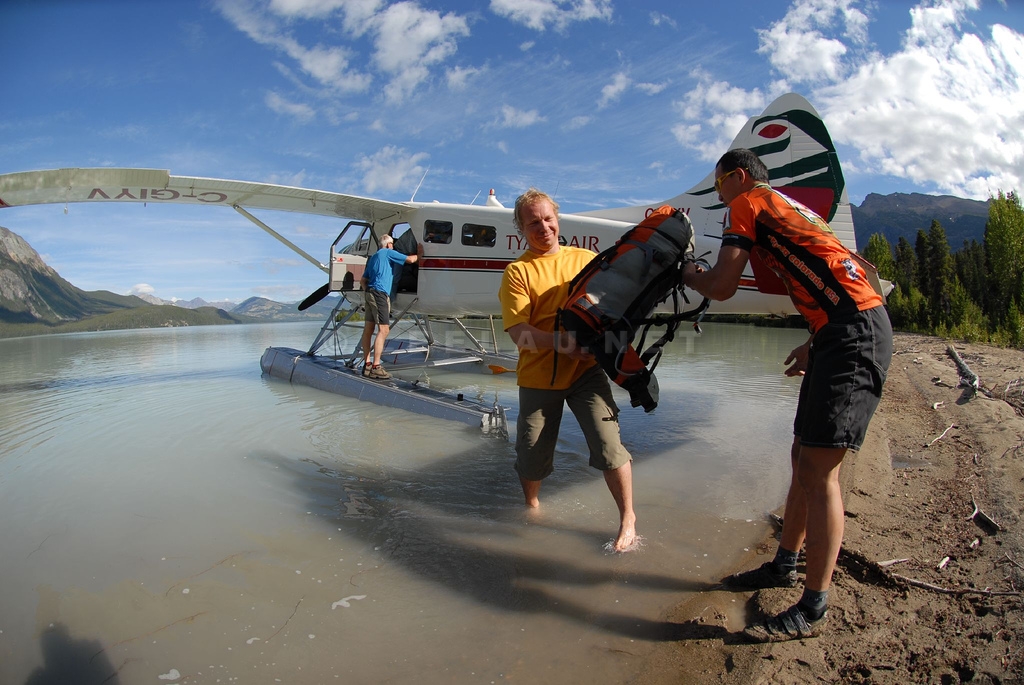 Last check as Dale taxis away. Did we forget anything? Mike, where’s your shoes ??? Just joking 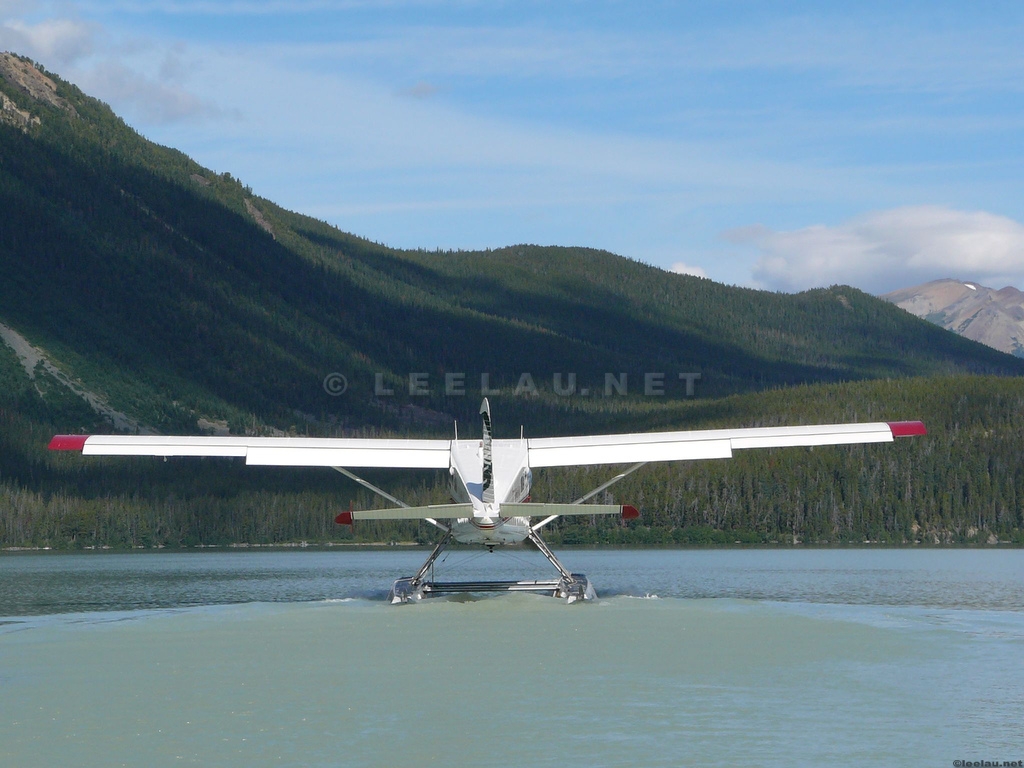 Mt Pilkington (2828m) is in the background. As the crow flies, we’re 55.8km from Tyaughton Lake. But we’re not birds and we don’t fly so off we go from Taseko Beach. 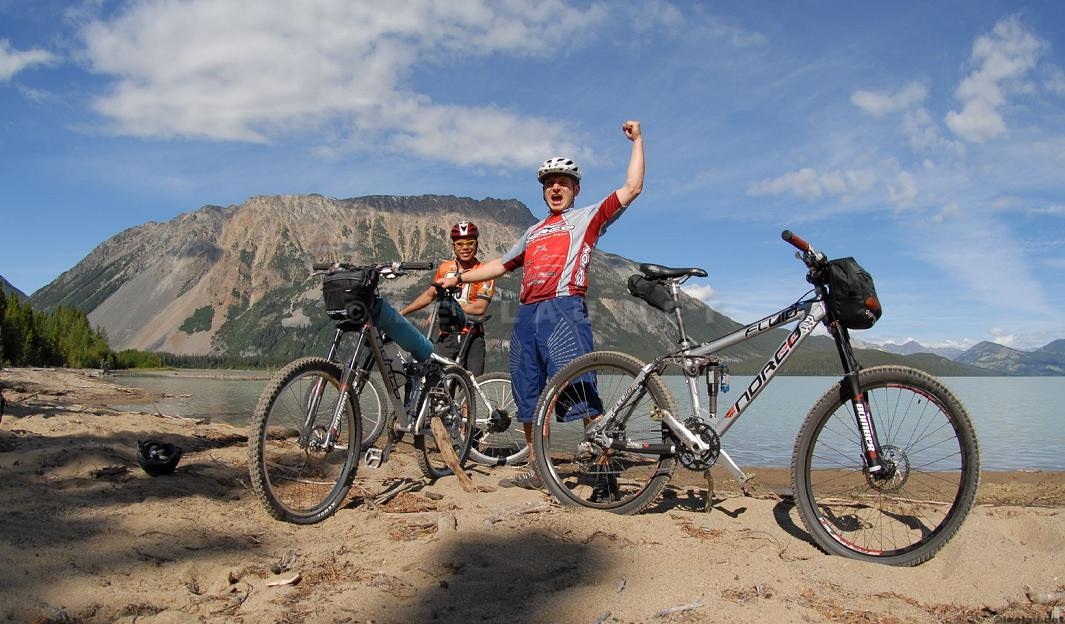 The first bit of riding is a cakewalk. No grizzlies and wide open fairly fast roads with a gentle uphill grade. I stop to get a picture looking south from the road to the Lord Glacier and Mt McClure.

Powell Creek is about 10km from Taseko Beach. It’s running a tad high. 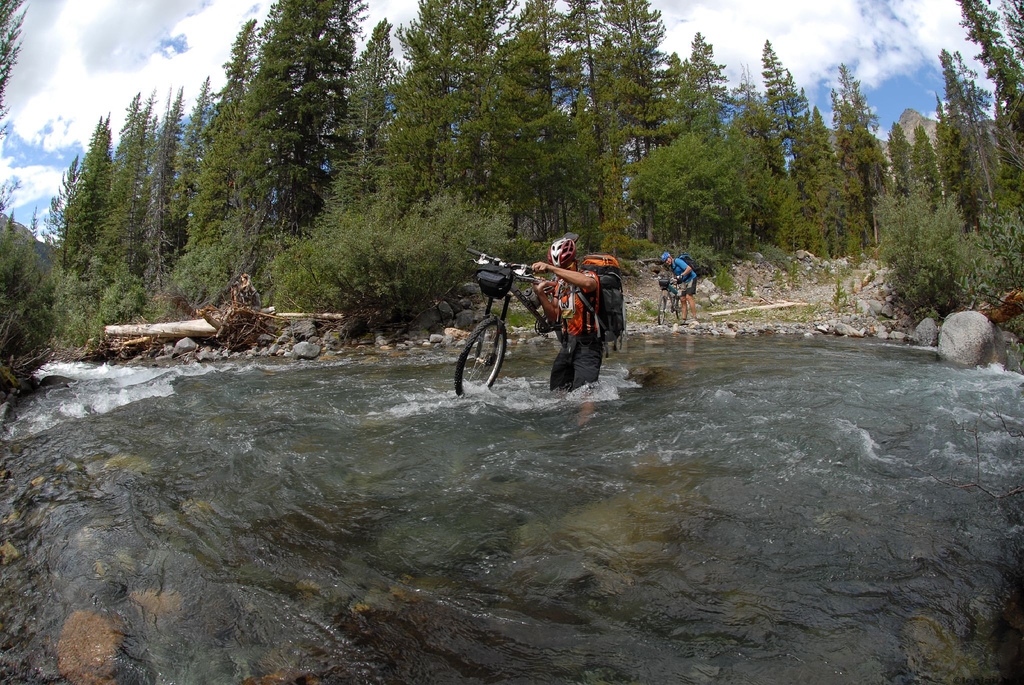 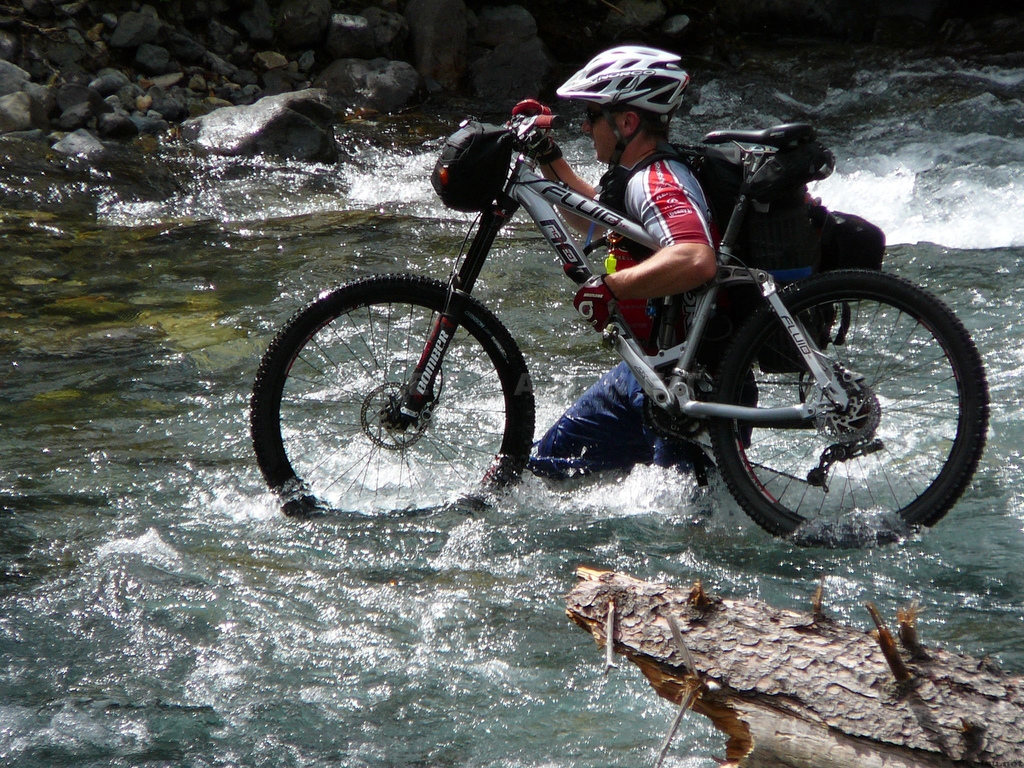 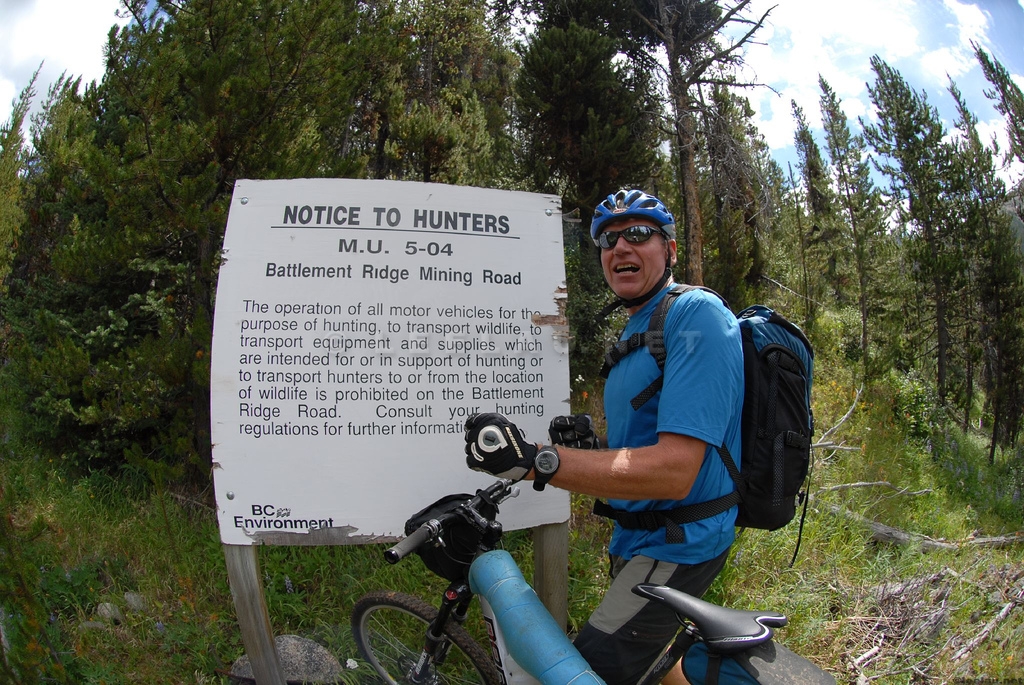 Travellers on two wheels in the Chilcotin get used very quickly to pushing. 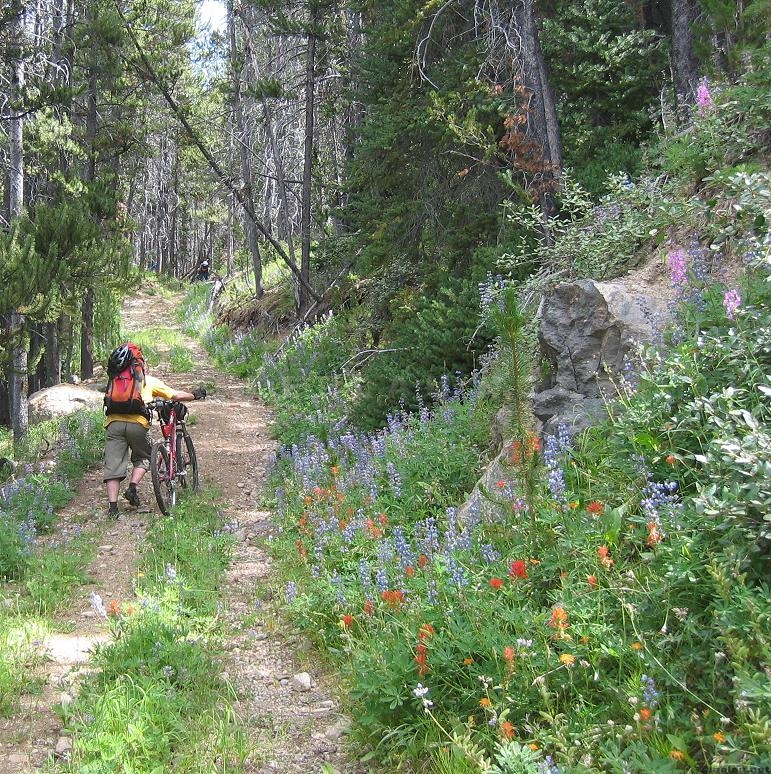 Not too far up the road there’s an old abandoned camp. Just before the camp maybe about 200m along the mining road, there’s some singletrack splitting off the road to the left going uphill. We didn’t follow that singletrack but figured it went to the camp and instead continued up the road. Pat finds some spare chain links for his bike. 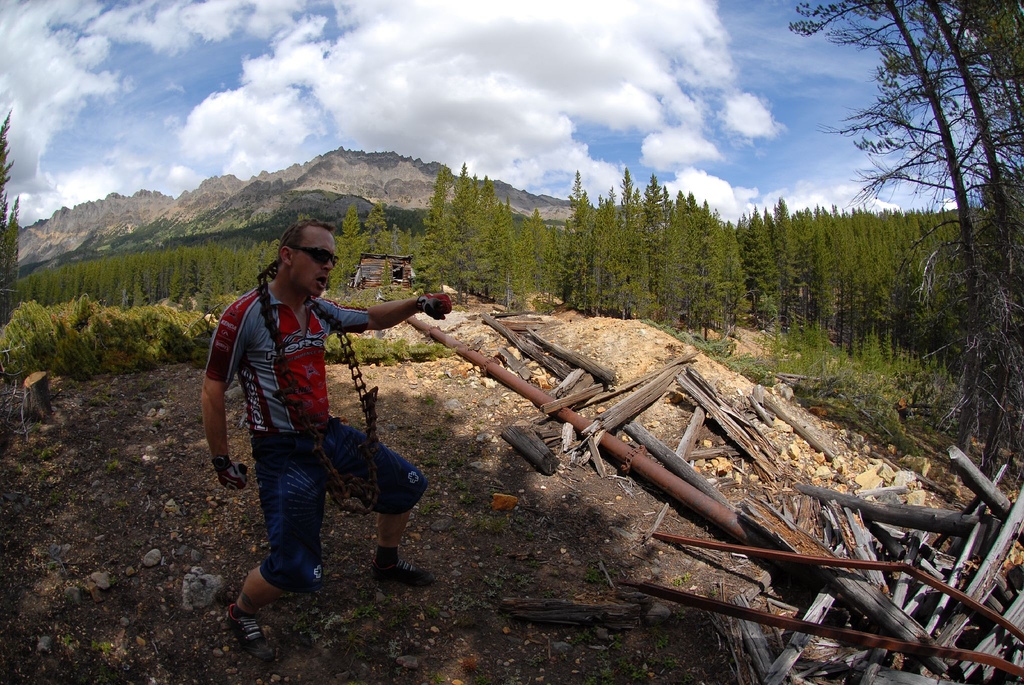 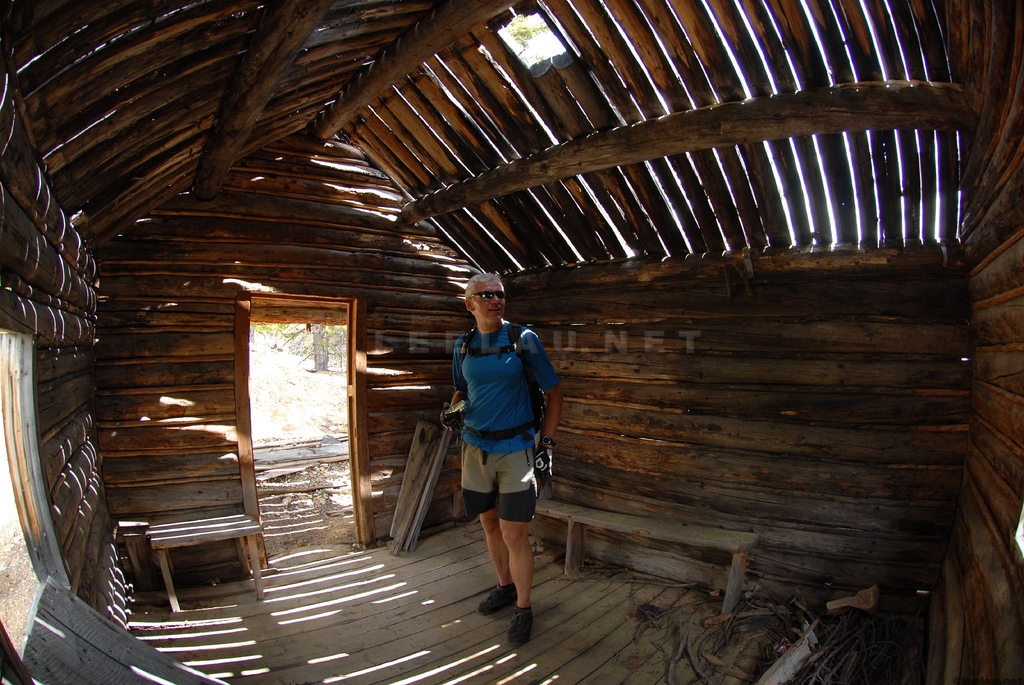 Panorama of the old mining cabins looking back down SW.

Soon we’re in the sub-alpine and into the flowers. Our beta from the plane shows that we have to contour above Battlement Creek on the slopes south of the creek and then hit some other roads that lead up to the old mine before then dropping down to Battlement Creek itself and then climbing up to Iron Pass. 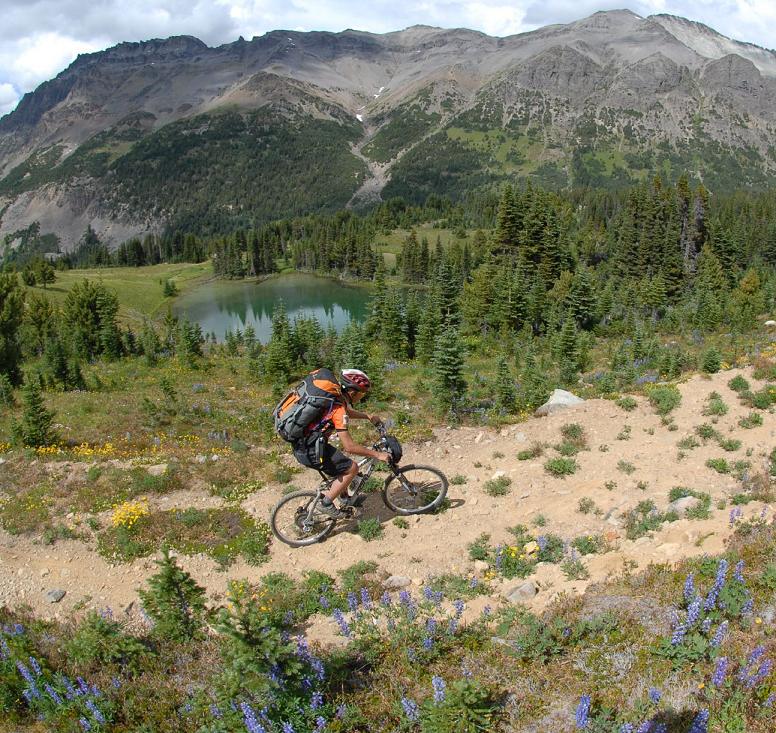 Flowers are magnificent and none can resist picture taking. 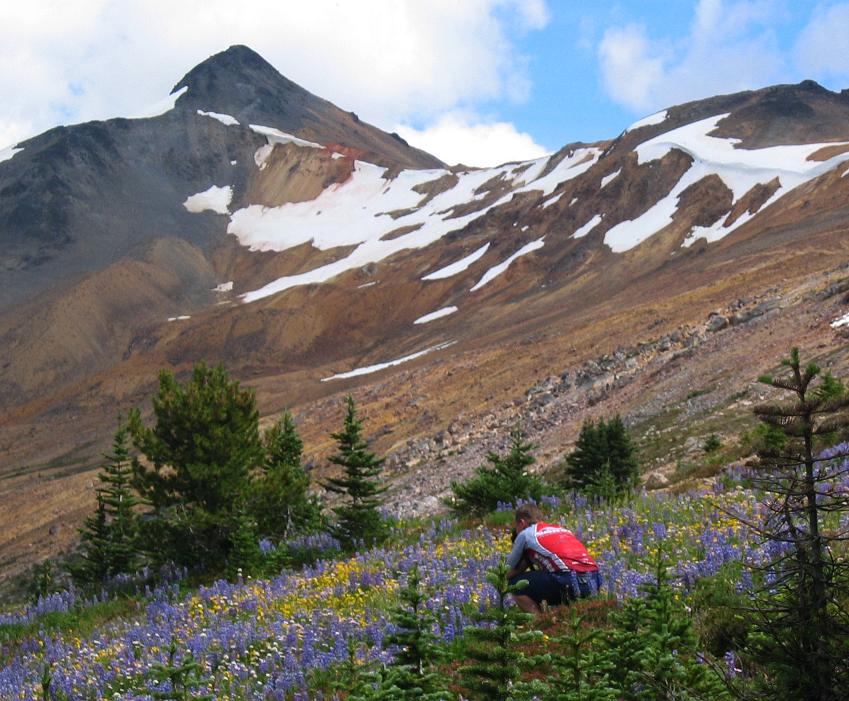 This panorama looks east up the Battlement Creek drainage to Iron Pass on picture right.

This panorama looks SW down the now-silty Battlement Creek back to the mountains surrounding Taseko Lake (possibly Mt MacLeod?).

Lots of horseflies around. Horseflies love grizzlies. Four grizzlies in fact – a mother and three cubs! Zdenek took this picture from a safe distance. 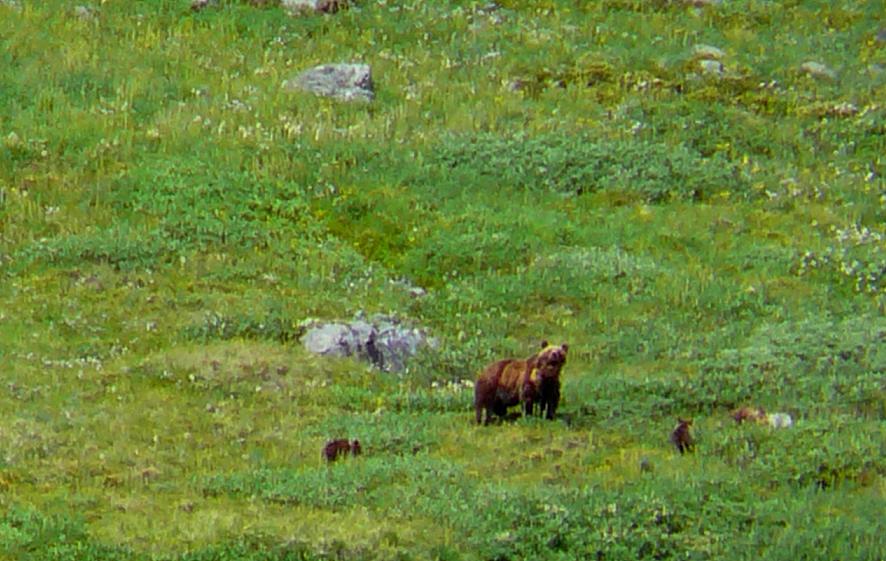 After avoiding those 4 grizzlies, Pat sees another big male blonde grizzly. That grizzly ducks off into some rocks where we can’t see it so we nervously, noisily keep heading up to Iron Pass. After some time, we figure the bear has taken off somewhere a little more private and relax a bit. Here’s Mike and Zdenek approaching the pass with the ridge of Rae Spur in the background – a little pocket glacier is off to the side of that snowfield. 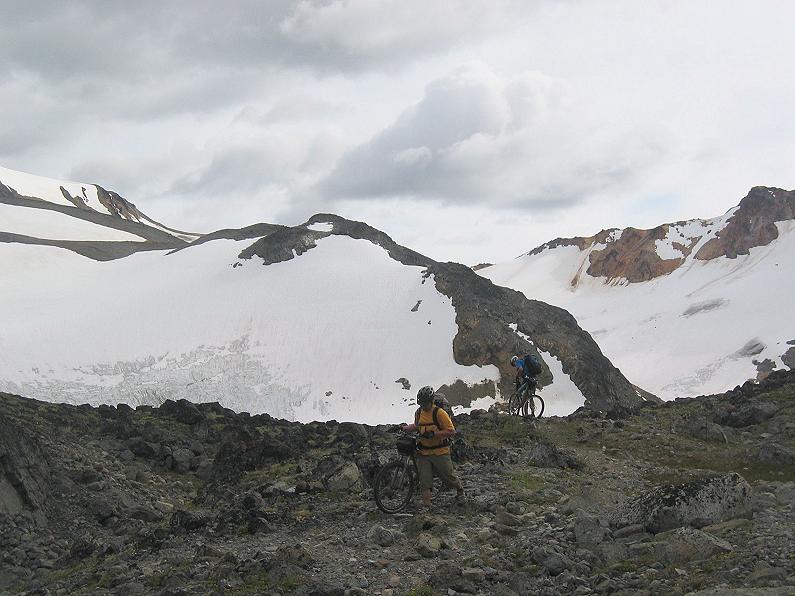 This panoramic shows the view off Iron Pass looking down east into Grant Pass. Powell Pass is off to the right of the picture (N) and apparently you can cross from Powell Pass to Iron Pass. Lorna Lake would be below Dome Peak – to picture right.

Well, none of us got any skiing in July but we think this counts as turns. 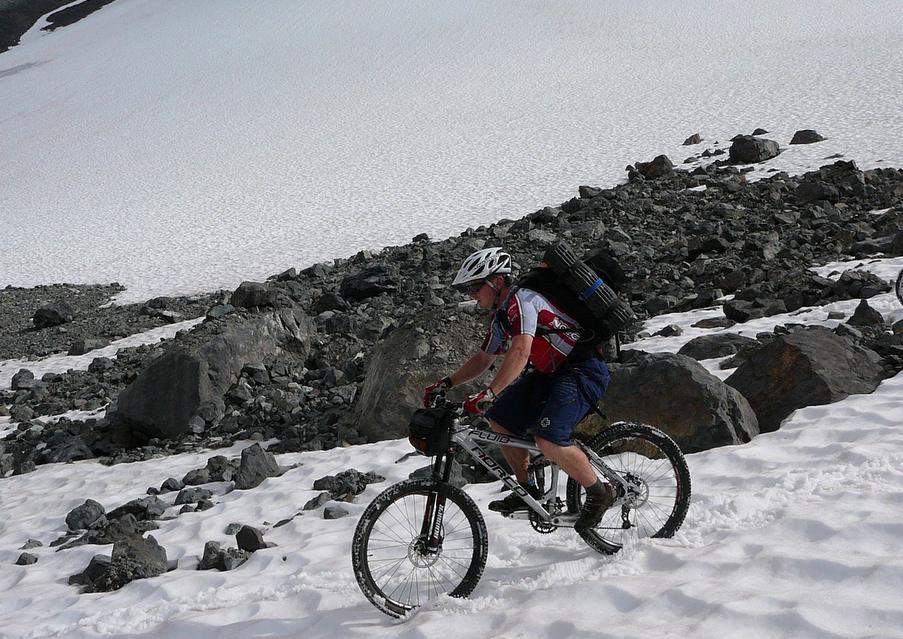 Zdenek descending off the talus and snowfields into Grant Creek – our figure 8s in the snowfields of Iron Pass as the backdrop. 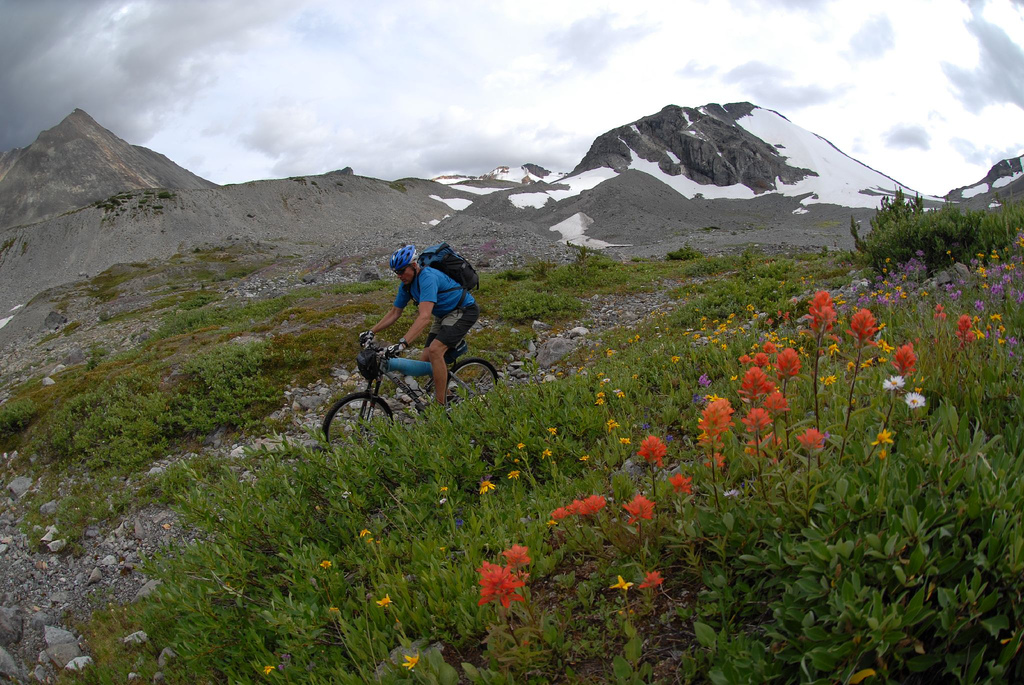 The Grant Creek singletrack looks deceptively smooth at this point. 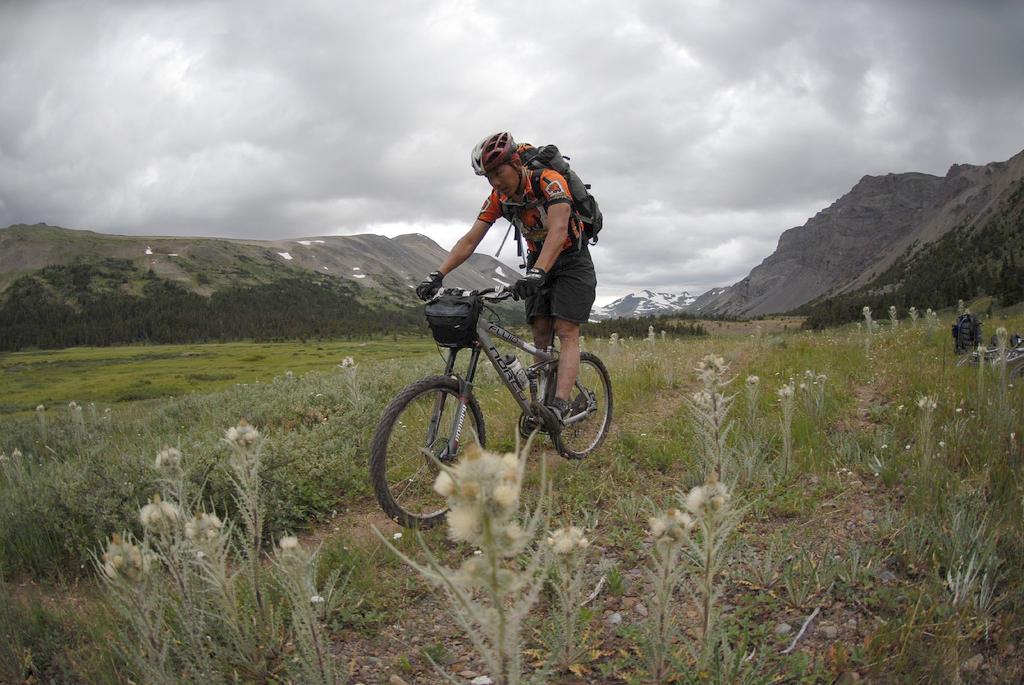 … be aware it’s not. As you go further down the valley, the trail gets boggy, slow and is overgrown with slide alder. It took us 3 hours to cover 7km to the Big Creek junction. – payback for the easy riding along Taseko River. 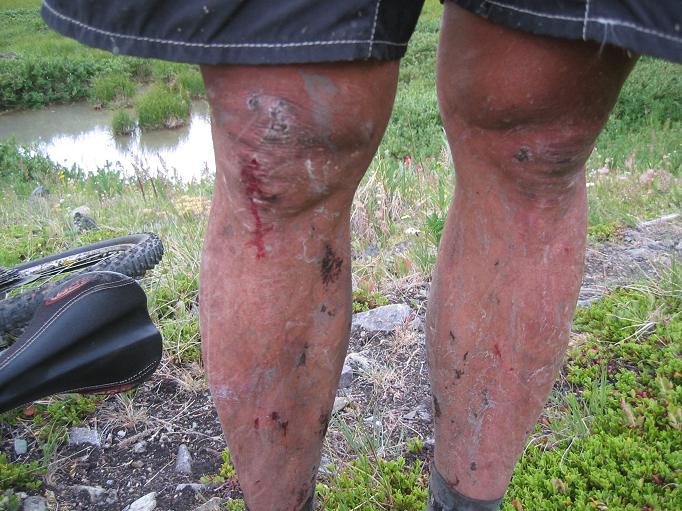 We were thinking of camping at Lorna Lake but settle for this awesome campsite at Big Creek where we could take in the view south to Warner Pass and Mt Warner. 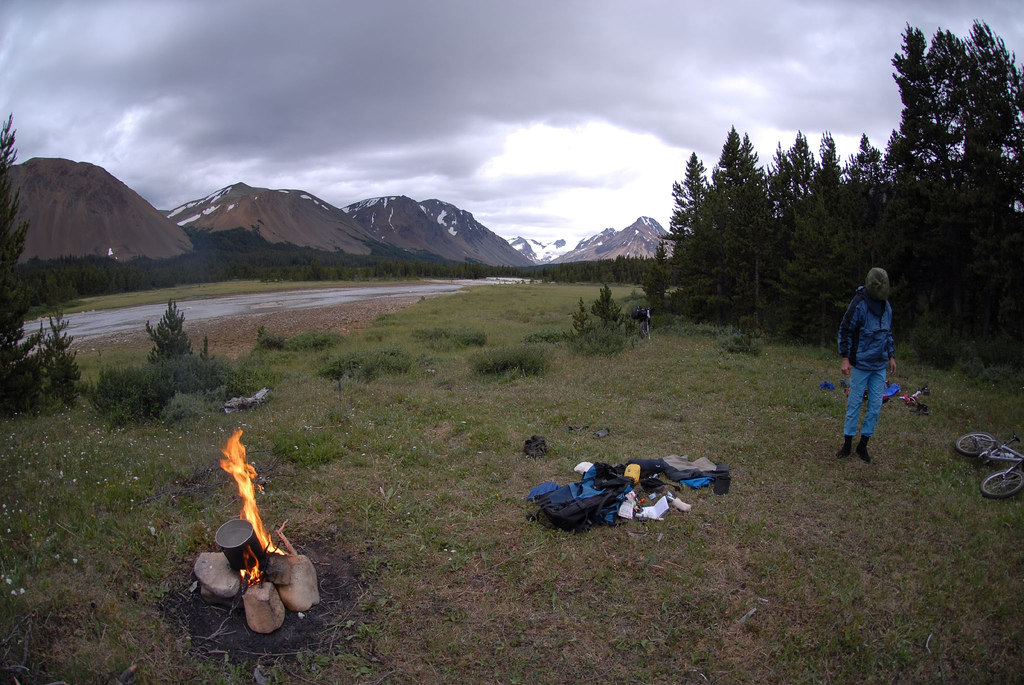 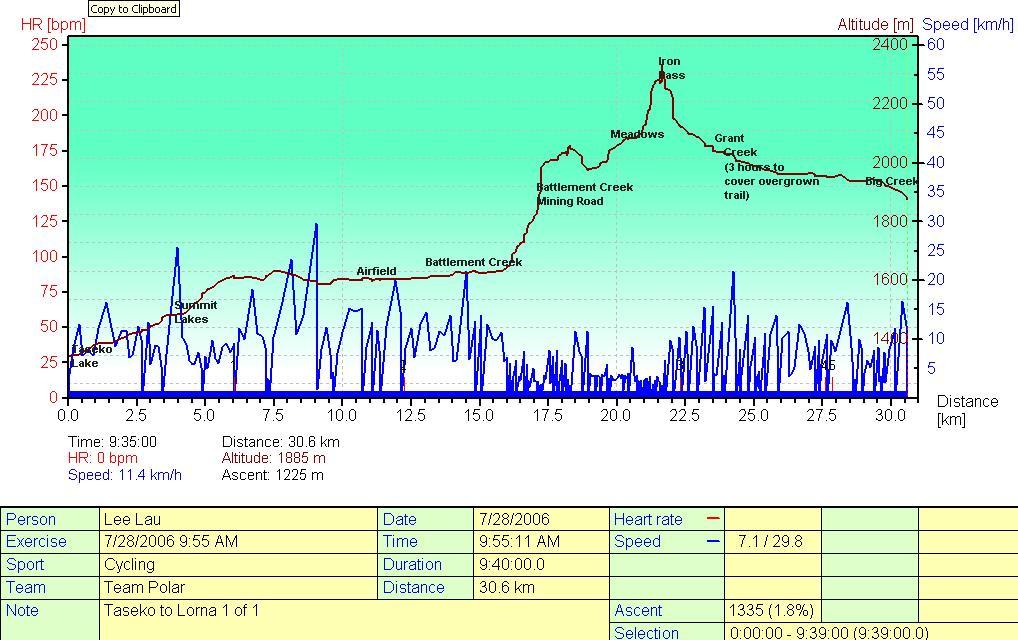 Some useful waypoints – all NAD82

This entry was posted in 2006, bike and tagged Chilcotins, taseko, tyaughton, Tyax. Bookmark the permalink.