Day 3 is sunnier and warm! Finally this system has passed and maybe we won’t have to worry about rain! We climbed up the same route we took on the first day (the High Trail to Taylor Pass) to check out another ride down the Cinnabar creek system.

View from the trailheads is clearer now then before

Kevin on the climb

Sharon on the climb. This climb always seems easier the second time around. 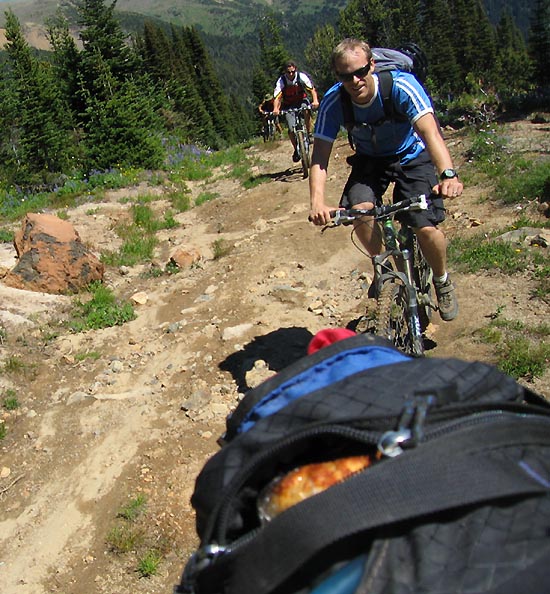 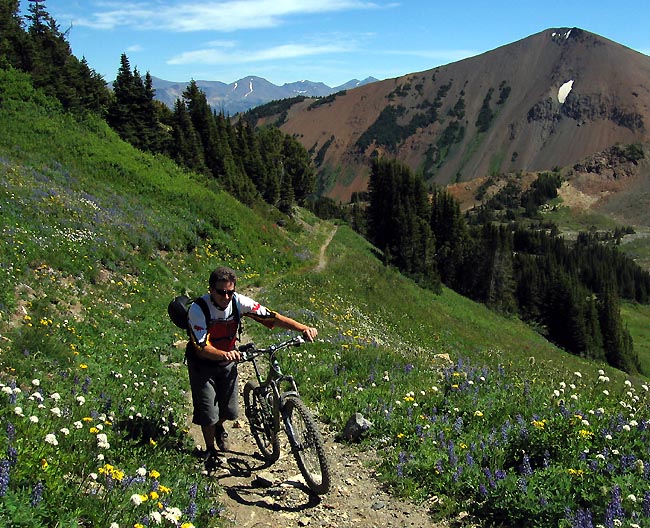 Chris and Kevin on the climb to Taylor Pass

From Taylor Pass, instead of continuing on the doubletrack of the High Trail towards the Eldorado drainage we turned left on to the Pearson Trail and then went exploring the ridges. We ended up riding about 8km of ridgeline, very little of which was hiking. Stunning 360 degree views all around with not a person in sight. I’m sure the old miners didn’t have bikes in mind when they put in these routes but bless their gnarled hearts in any event. 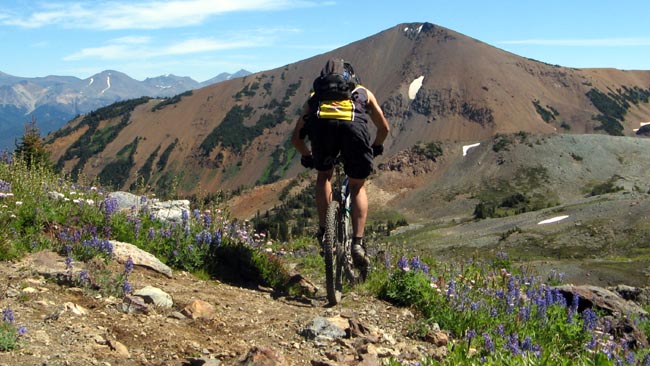 Lee dropping on to the Pearson Trail.

Chris heading to Camel Pass on the Pearson Trail 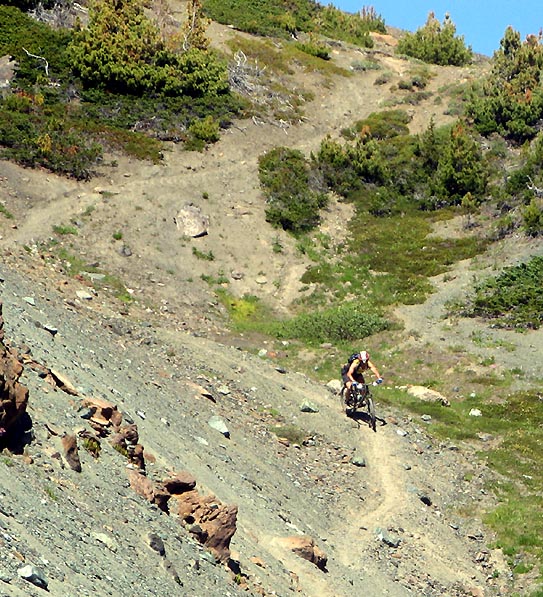 Lee on the Pearson trail. 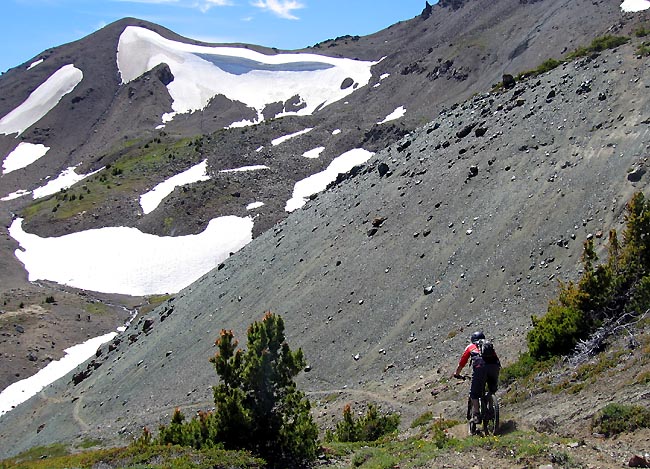 Taking in the view of Cinnabar Basin

Starting the hike to the ridges 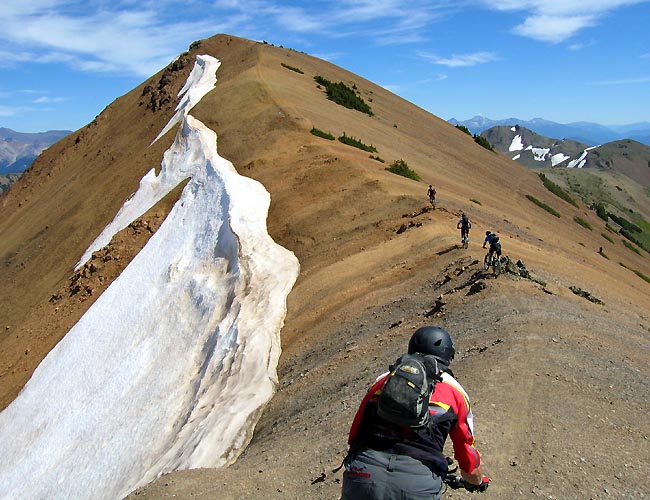 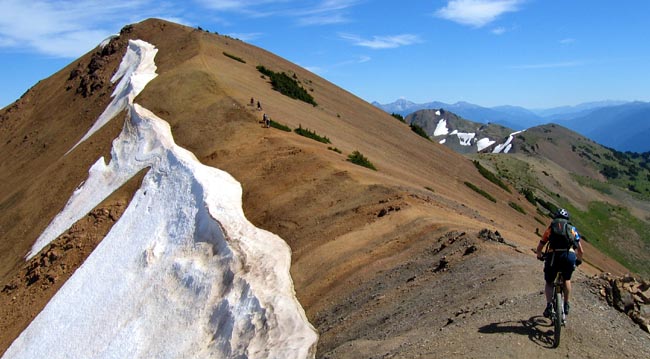 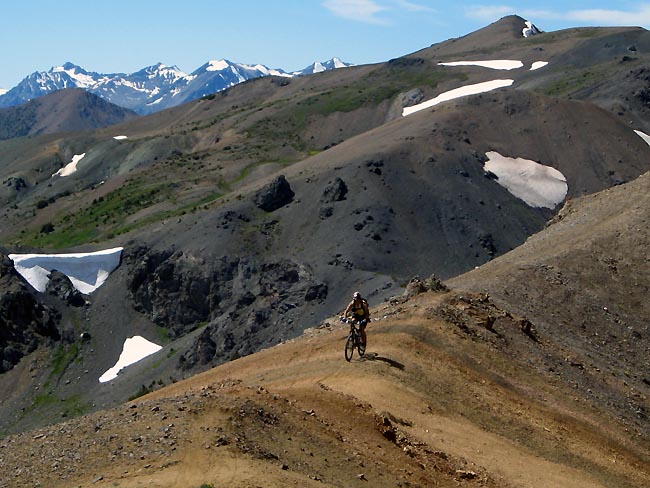 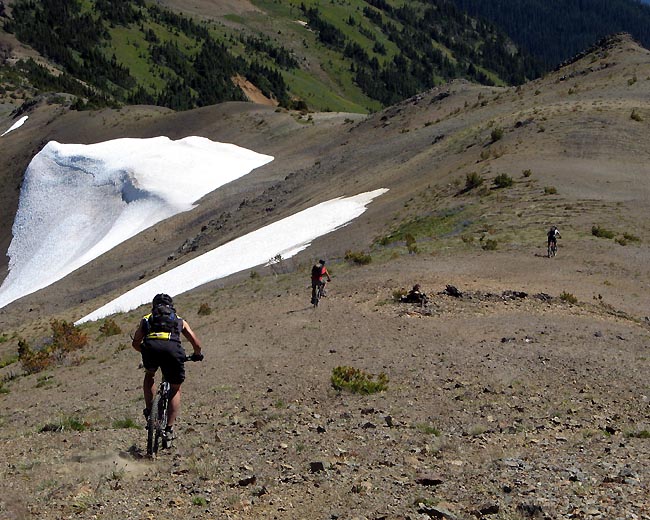 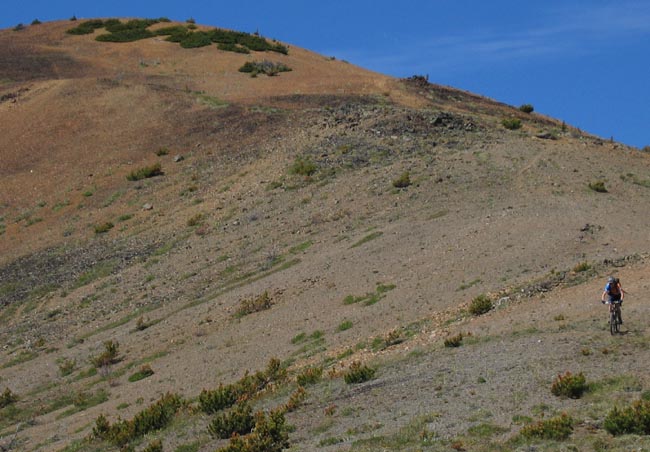 Cresting the ridge then riding down 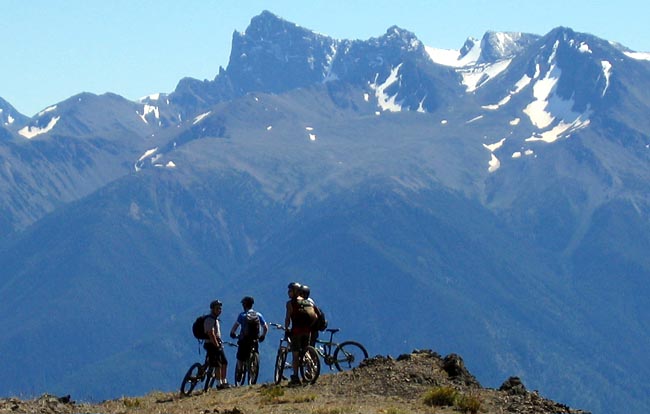 Group shot – looking on to the Dickson Range

Sharon on the descent. We started at the ridge in the background 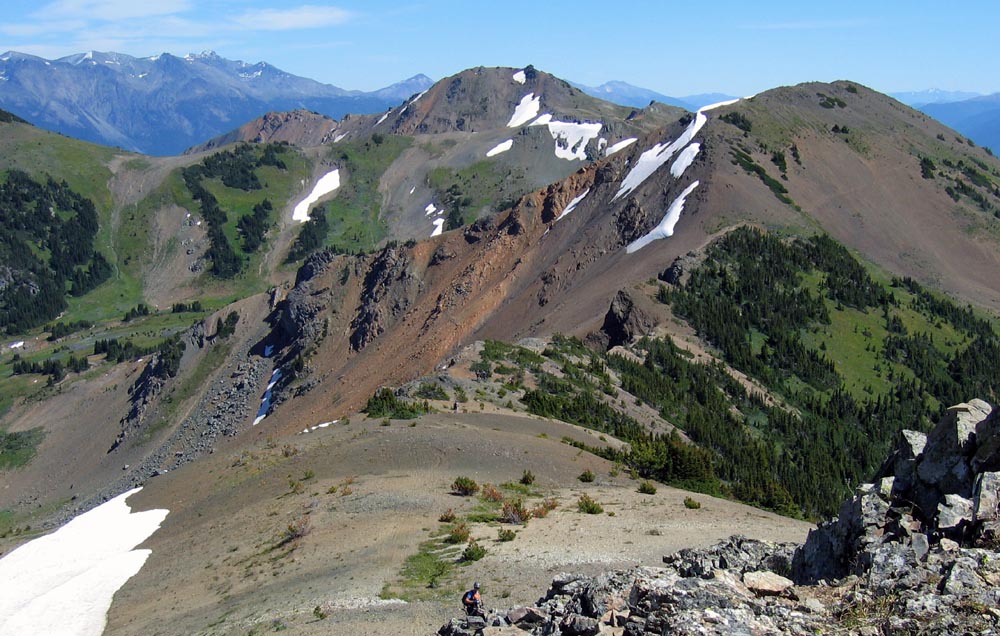 Look at Sharon at picture bottom. Our ride takes us along the ridgeline pictured in the foreground then winding to picture left 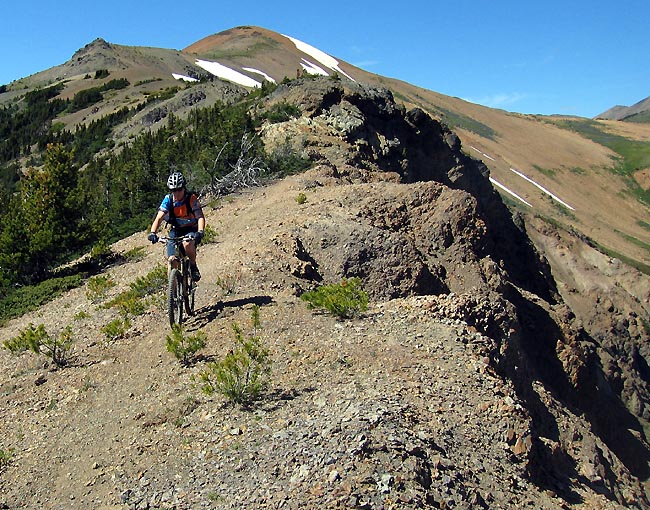 Sharon on the ridge

View from this basin looks S to Tyax Lake. Our route continues along picture left side-hilling the scree slope

The careful reader will notice the paucity of directions. This route will find you when you’re ready. Honestly, if you keep your eyes open you will find this jewel among ridgeride. Just to give you an idea of the quality of the ride, in the picture below our route took us from where Sharon is standing along the ridge on picture left (can you see the trail?) then the far ridges in picture centre. Eldorado ridge is on picture right.

This route is not for fat-ass shuttle monkeys. Some fitness is required. The prize are the views and the baby-butt smooth naturally bermed 900 m descent off the ridgetops down to Tyax Lake at the end of the ride.

We ended this ride with approximately 1400m of ascending over 30kms. It would be possible to bail out earlier if weather comes in by either descents down the S Cinnabar Basin or by the High Trail doubletrack ascending from Gun Lk.

Sharon – Dickson Range in the backdrop 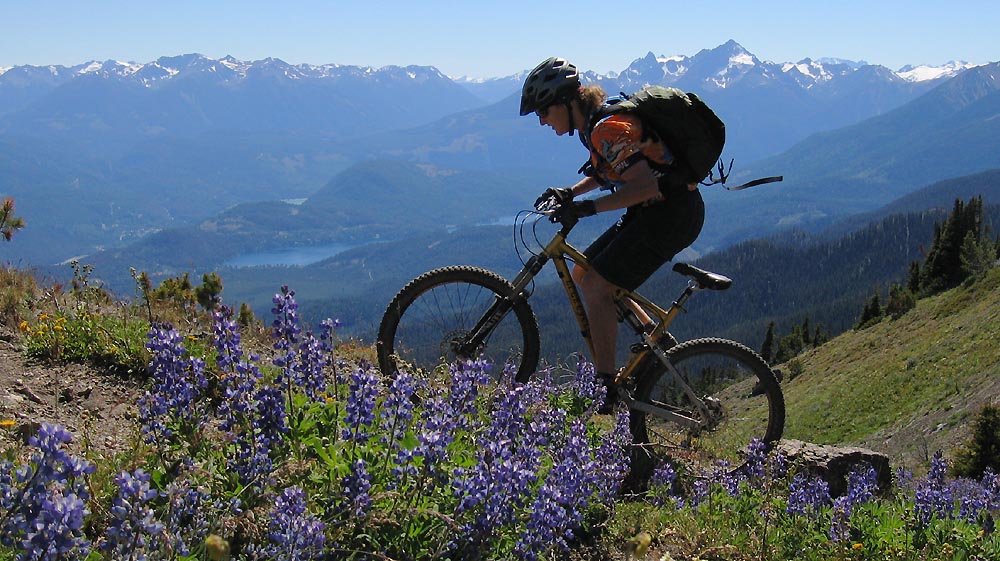 Sharon going for the climb 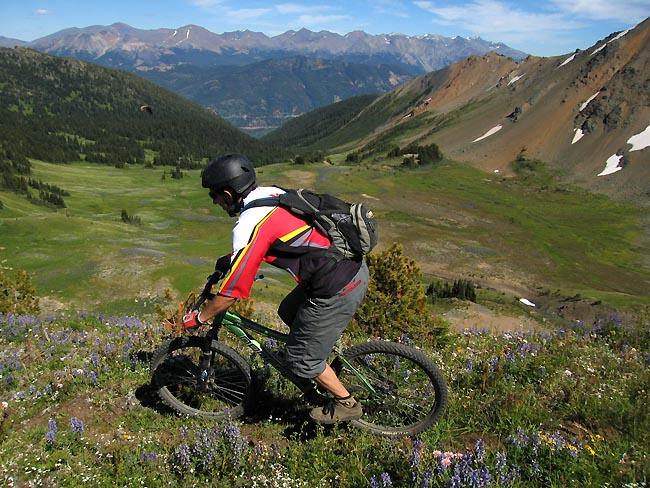 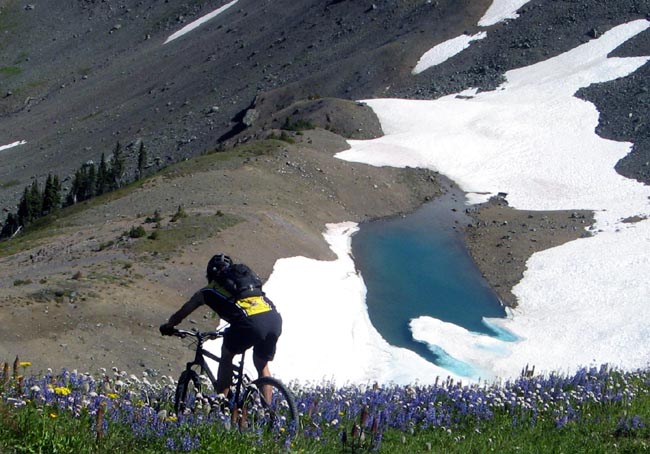 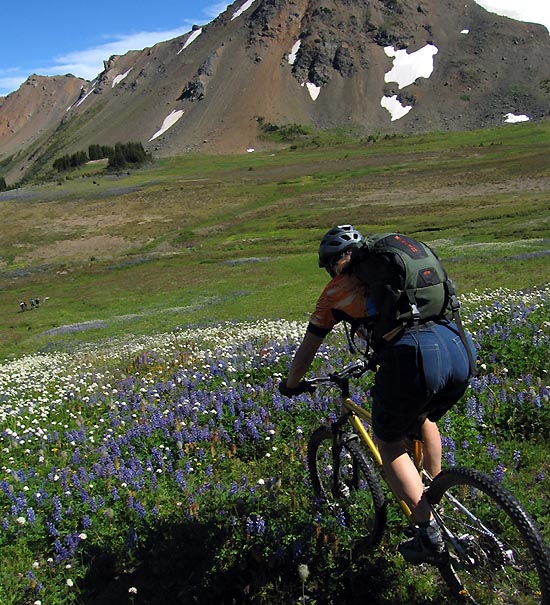 Dave and Kevin into the meadows

Sharon and Kevin trying to find the trailhead 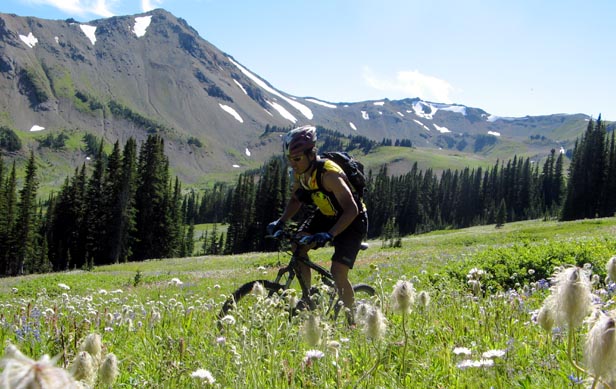 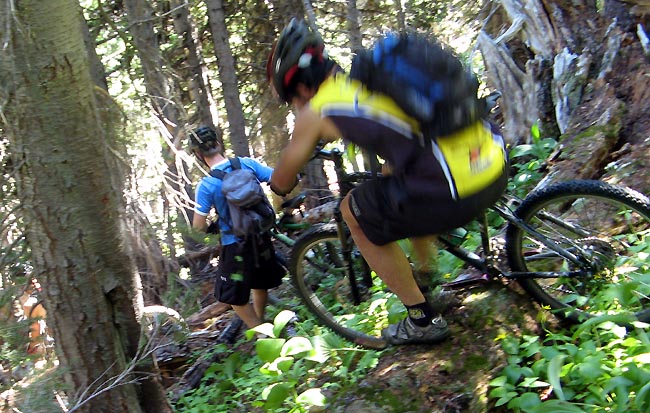 Getting a bit sidetracked and bushwhacking 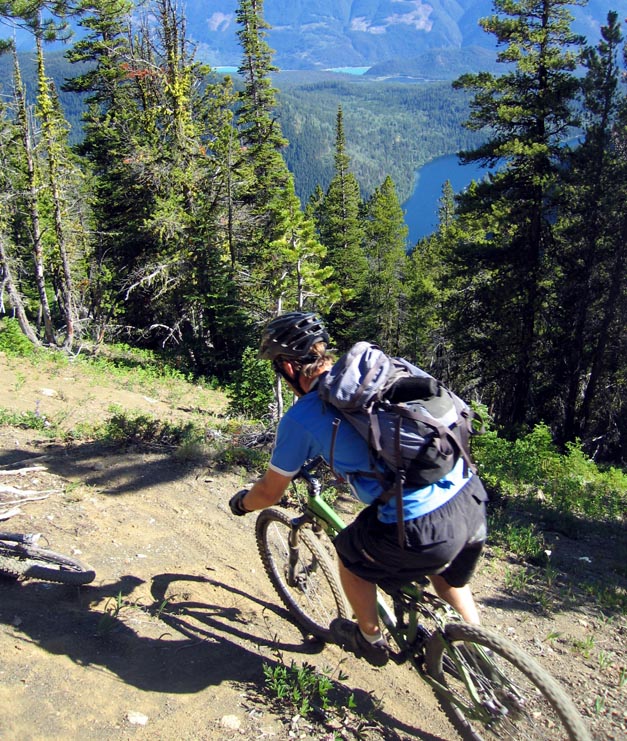 Chris on the descent 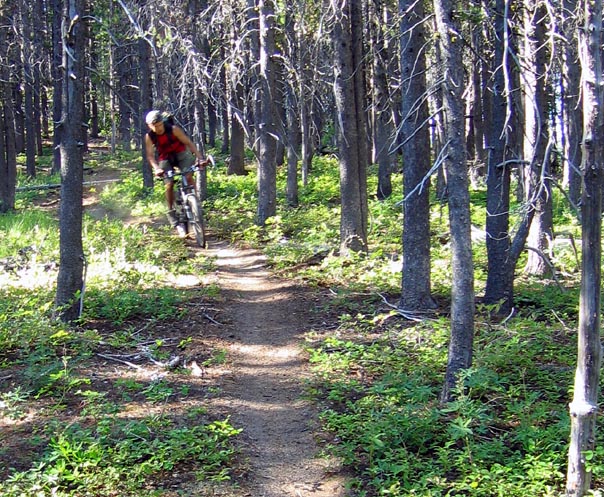 Trevor on some fast buff singletrack 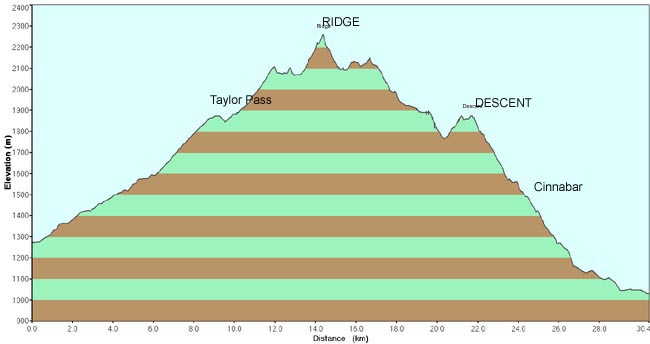