March is transition month. With the coming of spring this March was no different despite Canada’s southwest coast’s great ski conditions. With the freezing levels at surface for most of the month the change of seasons came in as sudden as the westerly weather pulse which increased freezing levels to 1800m. Ugh.

This means wet snow, increased avalanche hazard and all round sketchy touring. What to do? Head North to Terrace where freezing levels were in the town at 80meters and snow was in the forecast! So after cashing in some air miles we hopped on a plane and headed to Terrace and to Shames Mountain and to check out some pow at other neighbouring locales.

Terrace is a 1500km and about an 17 hour drive or an hour and a half plane ride from Vancouver. If you fly, it will take about as long to get to Terrace as it does to get to Whistler from the Vancouver International Airport. 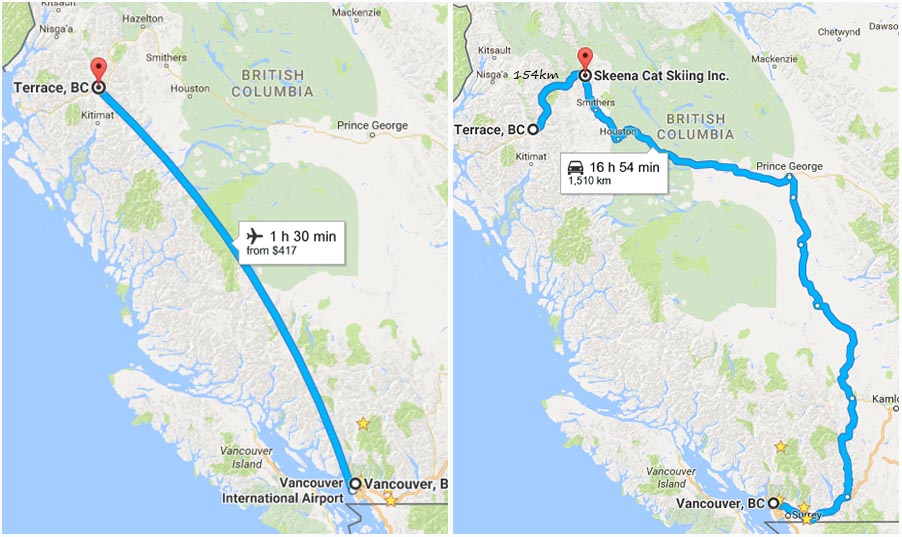 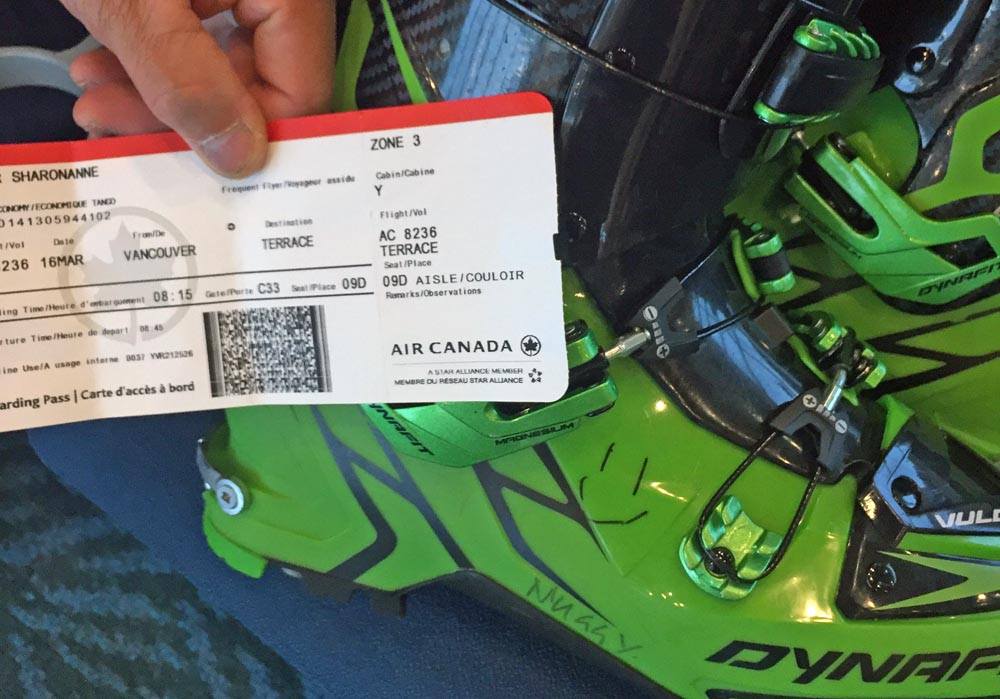 Terrace has a new Craft Brewery! Sherwood Mountain was started up by Darryl and Linda – longtime community people.. Had to stop in for a taste and Growler fill. It sure has some bigtime community support. Appears that Terracites like their beer. Then we head to Shames mountain to get our fill on no crowds and lots and lots of snow. With freezing levels right at valley floor we knew the quality of snow there would be acceptable.

Shames is a small local ski resort which averages 12 meters (approximately 40 feet) of snowfall a year. The surrounding Skeena Range mountains are “only” about 1800m to 2000m high. Shames’ base area elevation is at about 700m and extends to about 1100m. The resort area is 144 acres and occupies less then 10% of their huge 8,730 acres of tenure. To put that number into perspective, Whistler/Blackcomb’s total lift-served area is 8,171 acres while Vail has 5,289 acres of lift-served terrain. However because of the resort’s location in North – Central BC serving a population of about 30 to 40,000 people, Shames only gets 30,000 or so skier visits a year; a bit more than our home mountain of Whistler/Blackcomb sees in a busy winter day!

Shames is a community owned ski-hill Coop since 2012 there has been a ton of community support and interest in the little mountain that could. Thanks to the dedication from the community the ski area persists providing recreation and incredible access to some great back country skiing. While it may not be the destination that Whistler and other resorts are that are close to an International Airport, it is the reason many people have moved to Terrace. Check out our trip report from 2014 when we came here during another South Coast drought.

To get an idea of the size of the ski area versus the touring potential check out the map at Backcountry Skiing Canada. You can access the Prayer Flags area by a short boot pack directly up from the Tbar and down to the drainage and then head up No Socks on low vis days, or tour from the Tbars to the Dome and head out to the bigger bowls for a longer tour or during high vis days when you are called to the alpine. There is also a slack country area called Fayzurs which is a treed run easily accessed from the Tbars via a short skin that allows you to ski directly back to the lifts.

You can purchase John Baldwin’s Map of the backcountry area HERE. 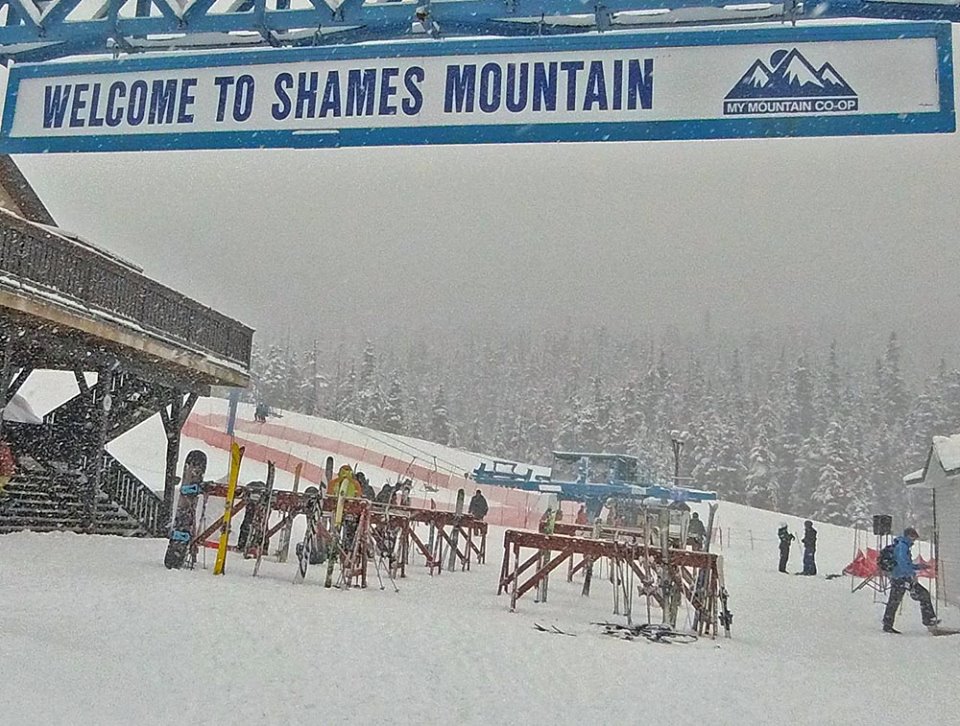 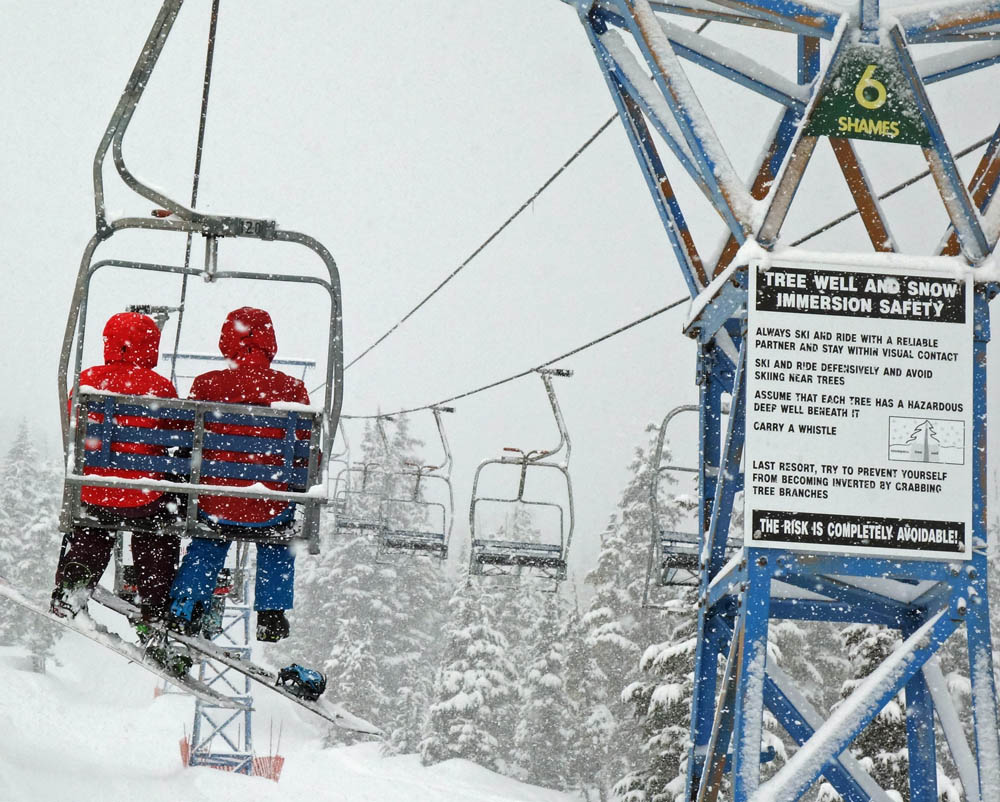 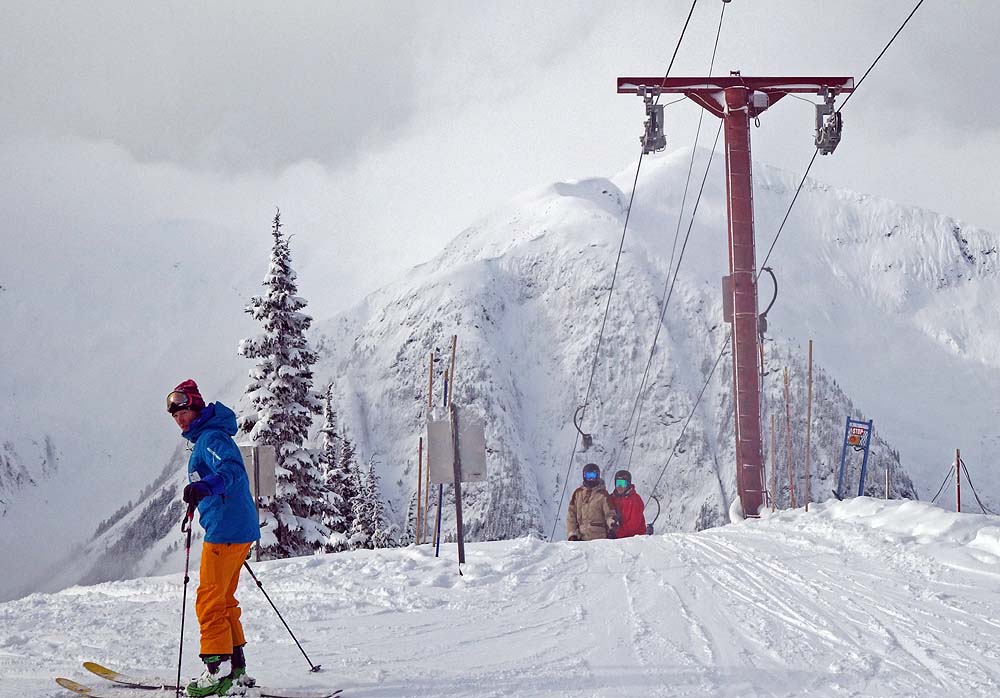 Top of the Shames T-bar when the sun visited and opened up the views! 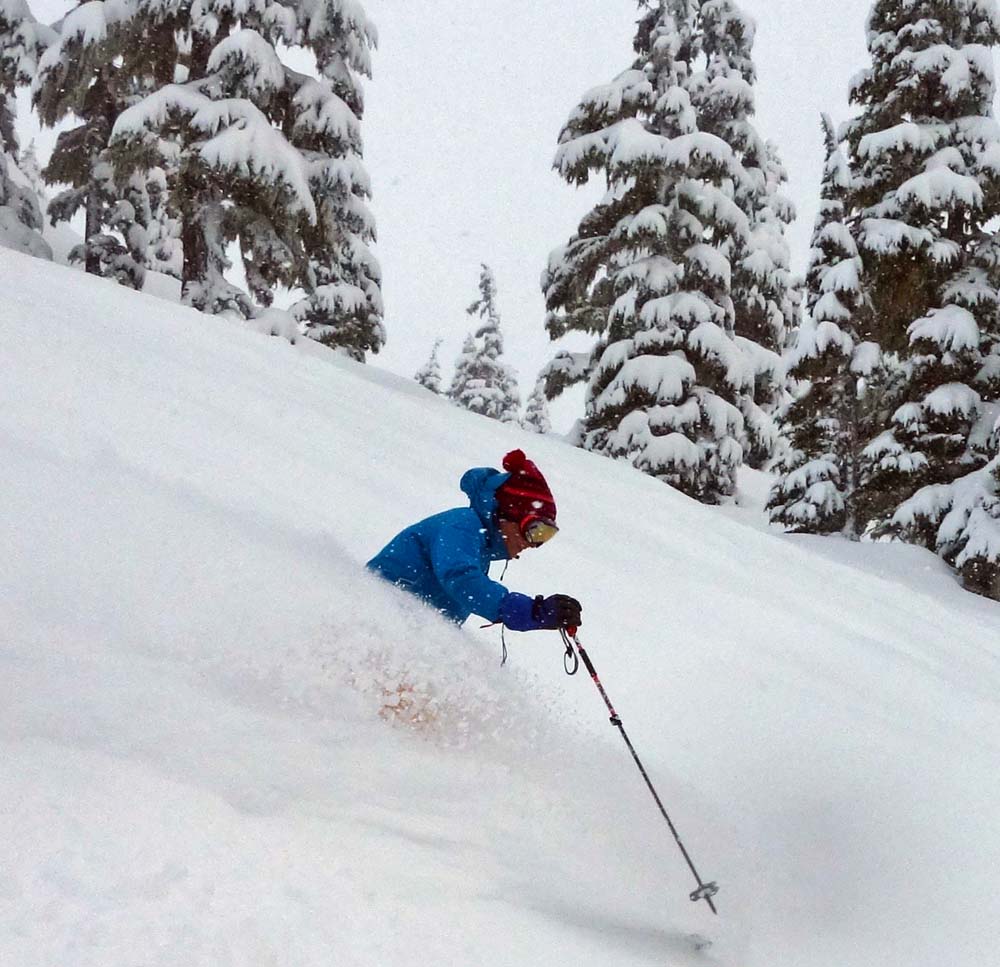 Some inbounds runs to start the day. We went for backcountry lines as soon as we had to start tracks at 11am 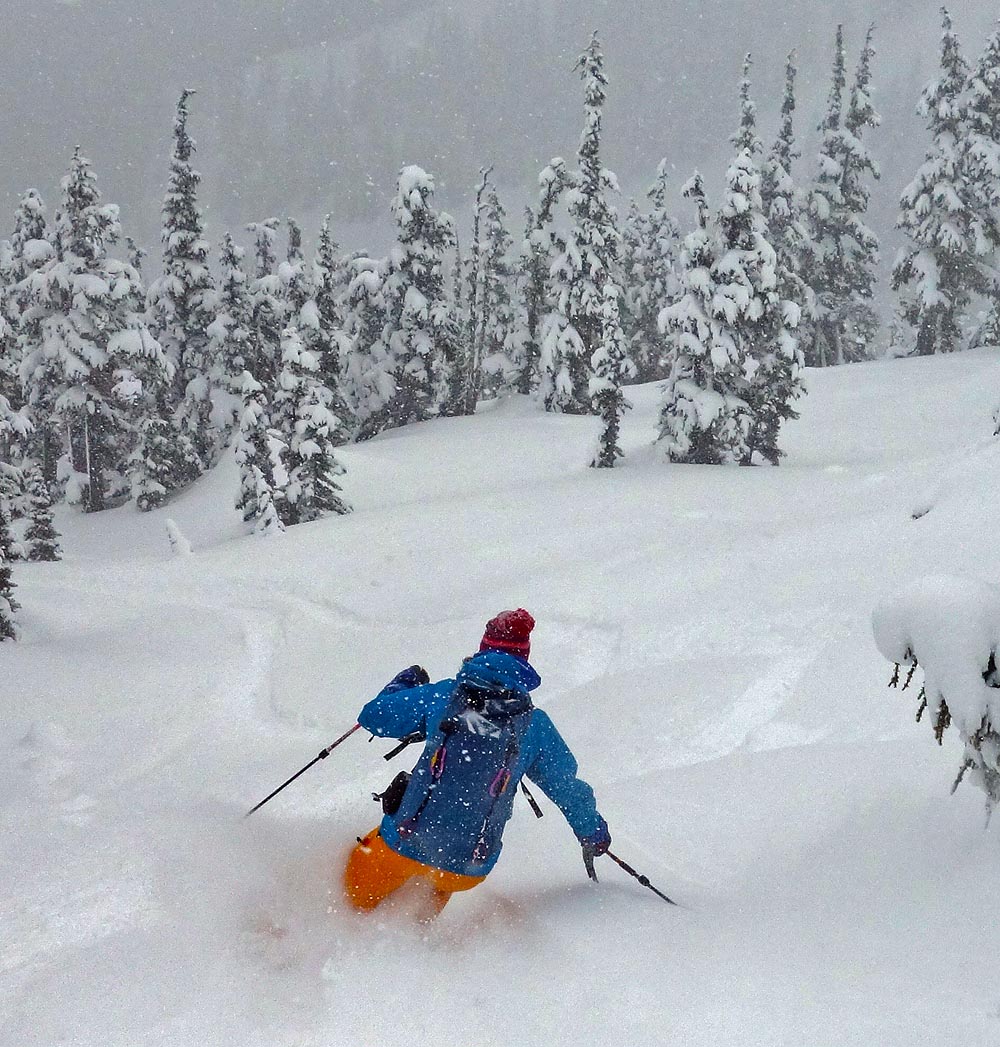 Watch out for those tree wells! 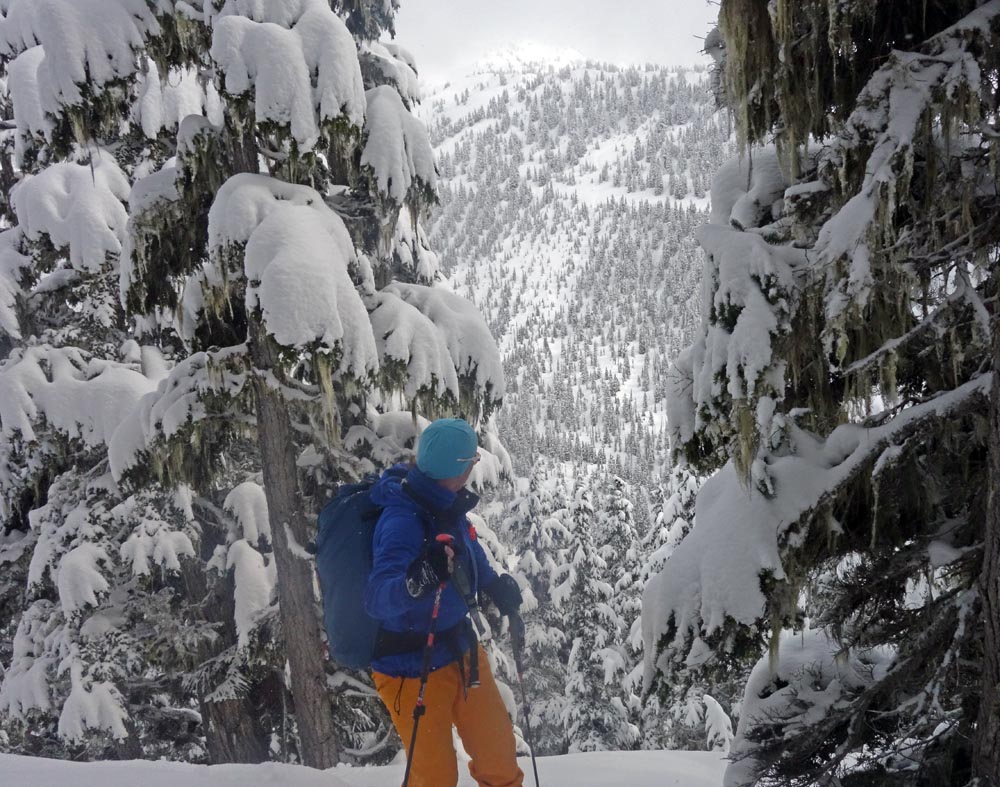 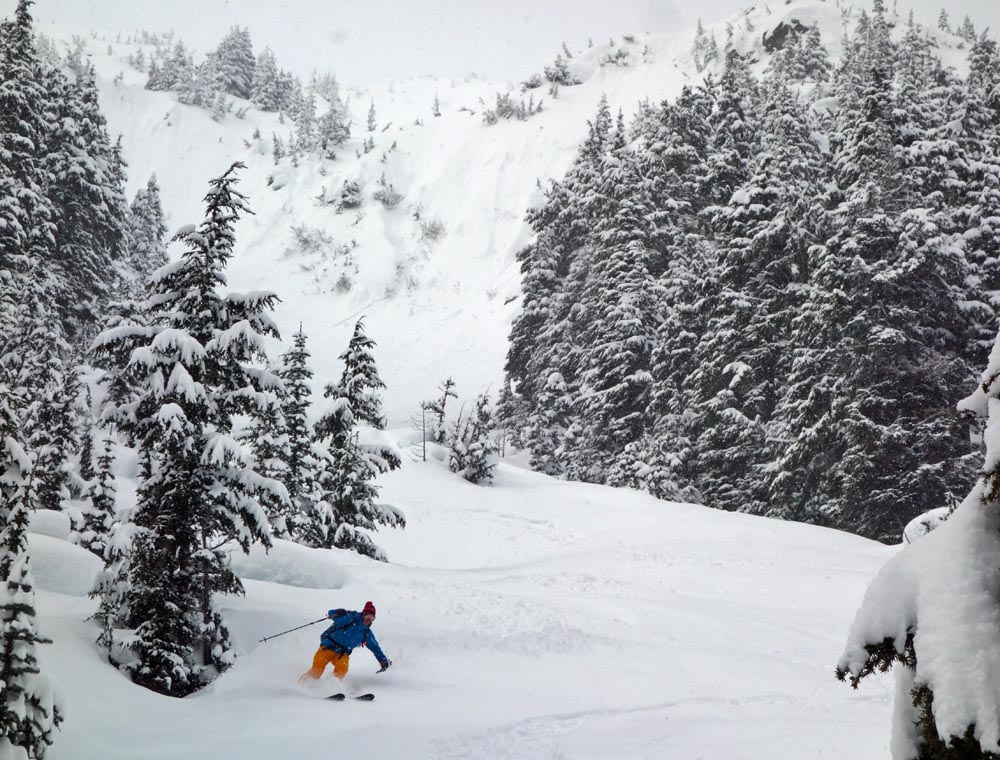 Heading down the Iron Curtain 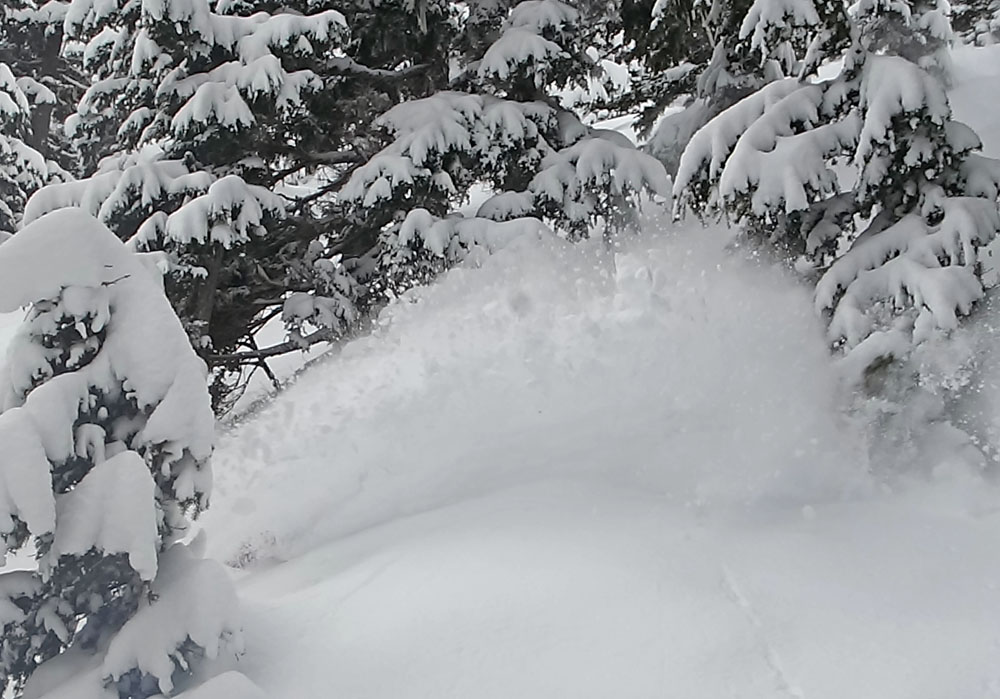 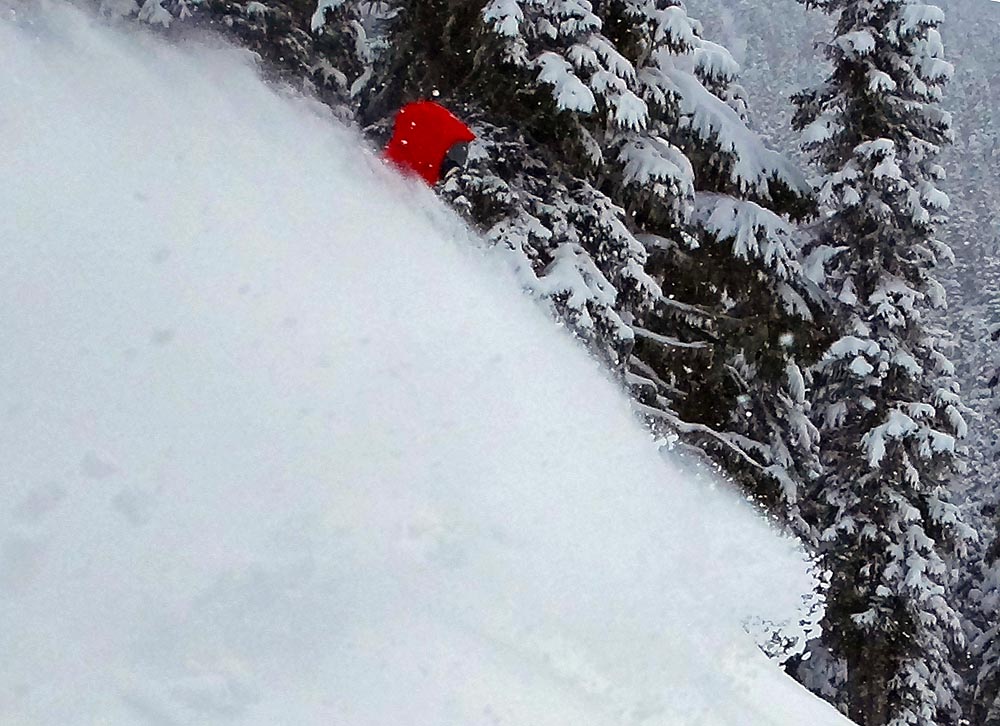 We were guests of Northern BC Tourism for this trip. Tyler Clark had us sample some of Terrace’s offerings by taking us to dinner at Blue Fin Sushi . Being close to the ocean and the mighty Skeena river we figured that Terrace would have good seafood and BlueFin sushi proved us right. 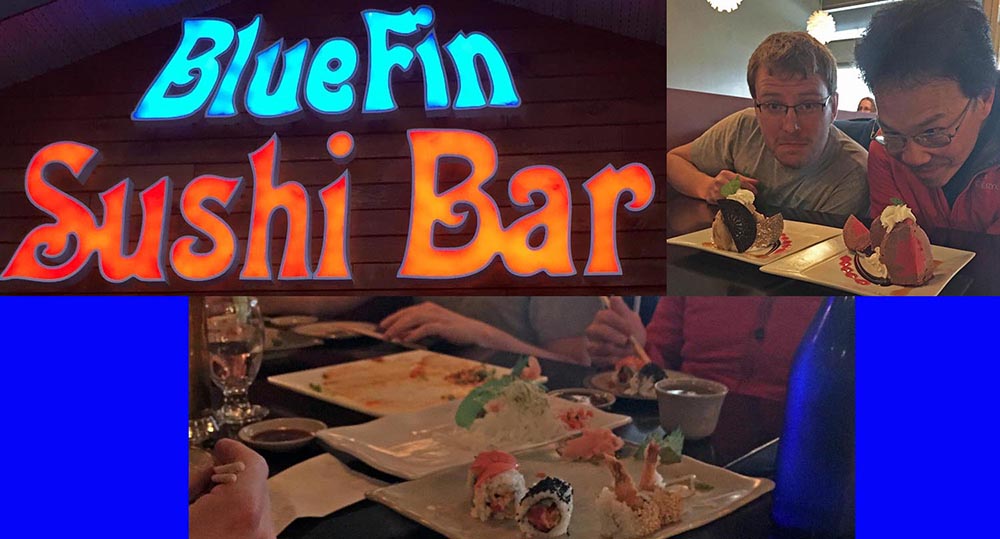 The next two day we did some sled access touring just outside Terrace. If you live in Terrace, a sled will increase your opportunities A LOT as many of the resource roads aren’t plowed. Of course you can fairly easily access many areas without a sled especially when roads melt out at lower elevations; which typically will occur towards the end of March. However this is an unusual season with the roads we used getting 60-80cms of light dry powder down to valley floor at 200m. Definitely a first world problem for driving access but it made for insanely easy sled towing.. 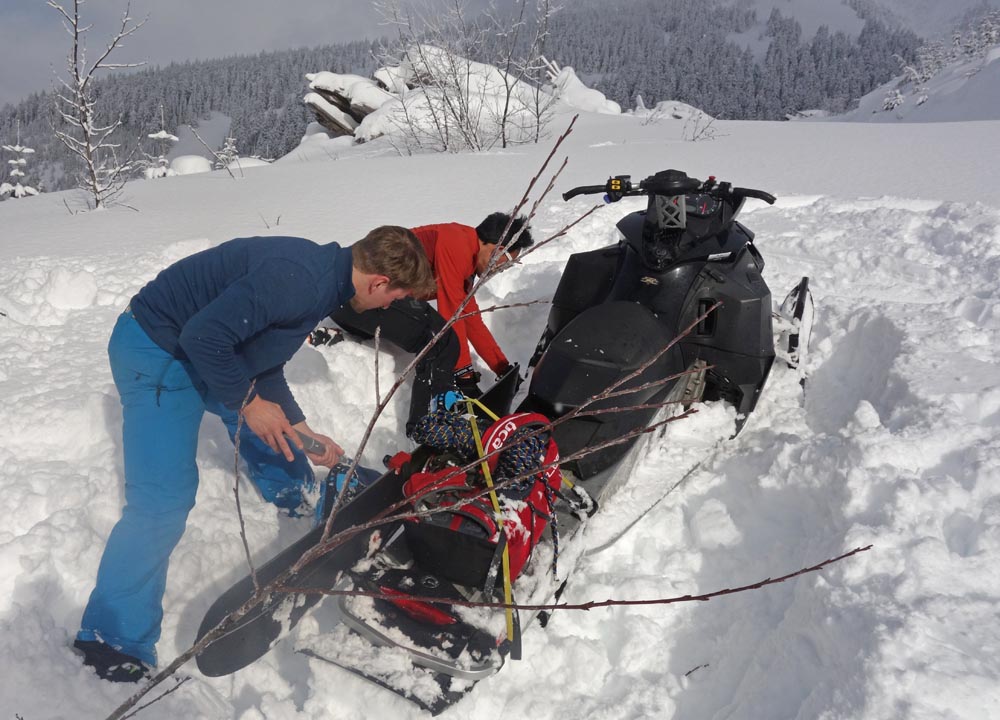 Sled towing in new snow doesn’t come without its issues 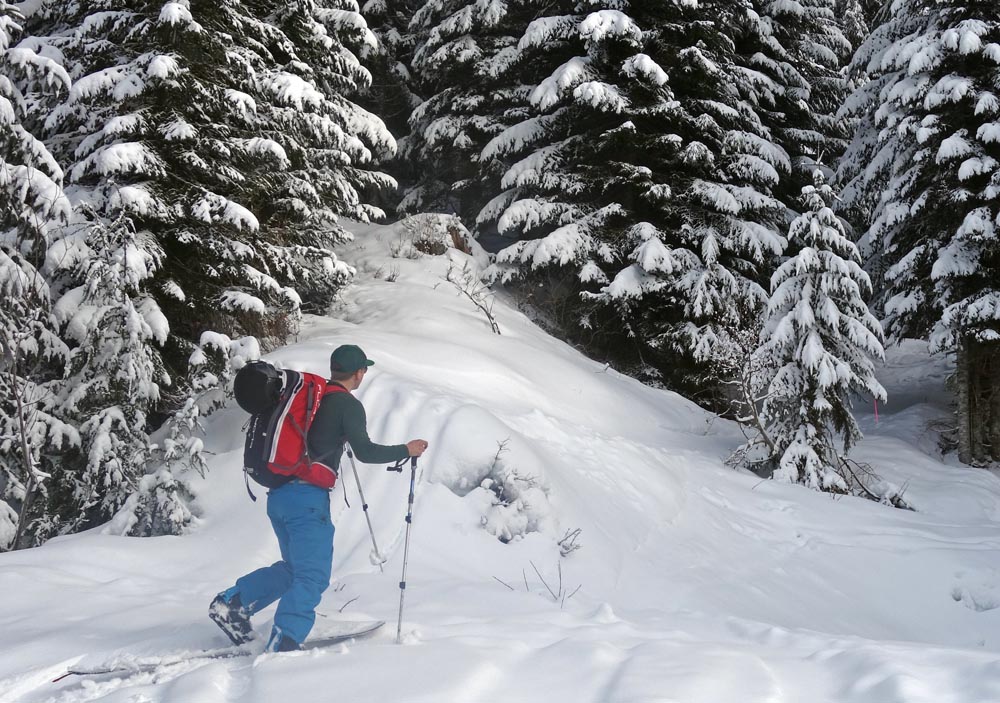 Heading up through the trees 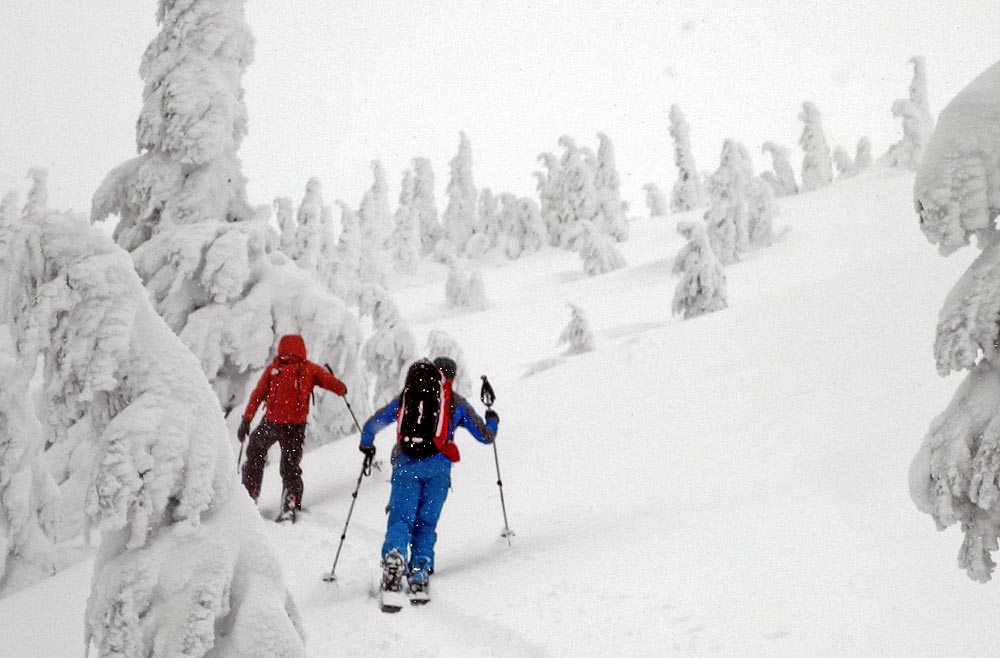 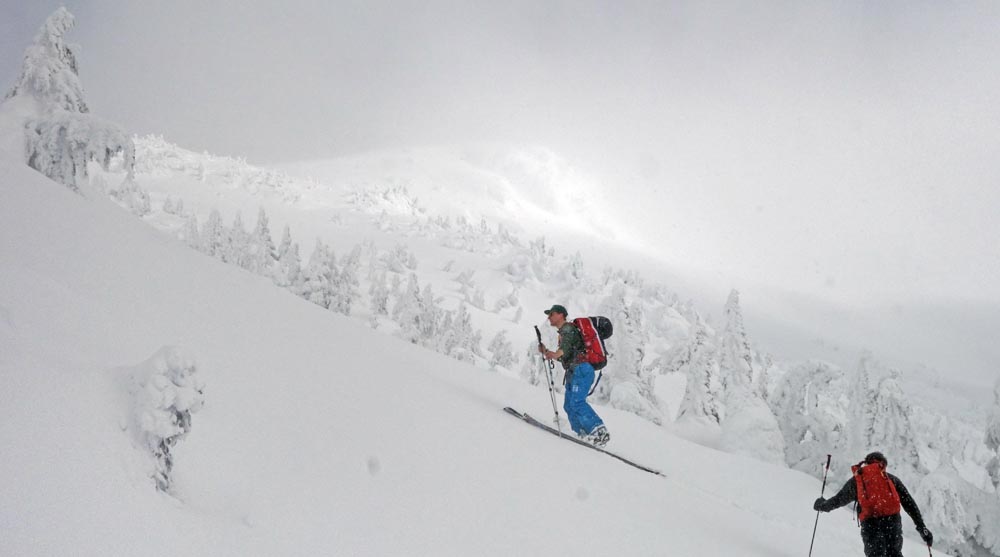 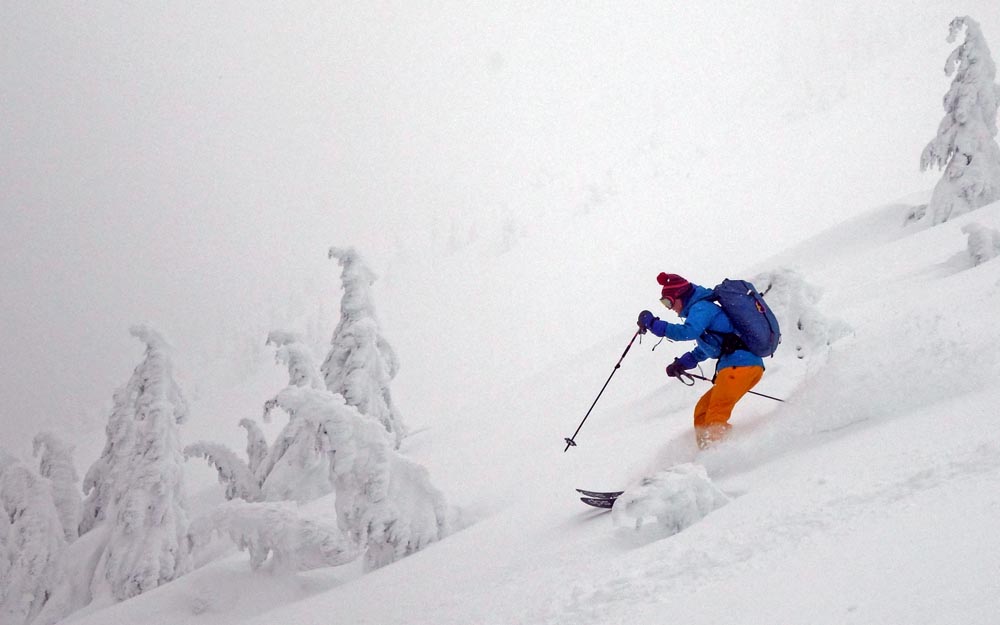 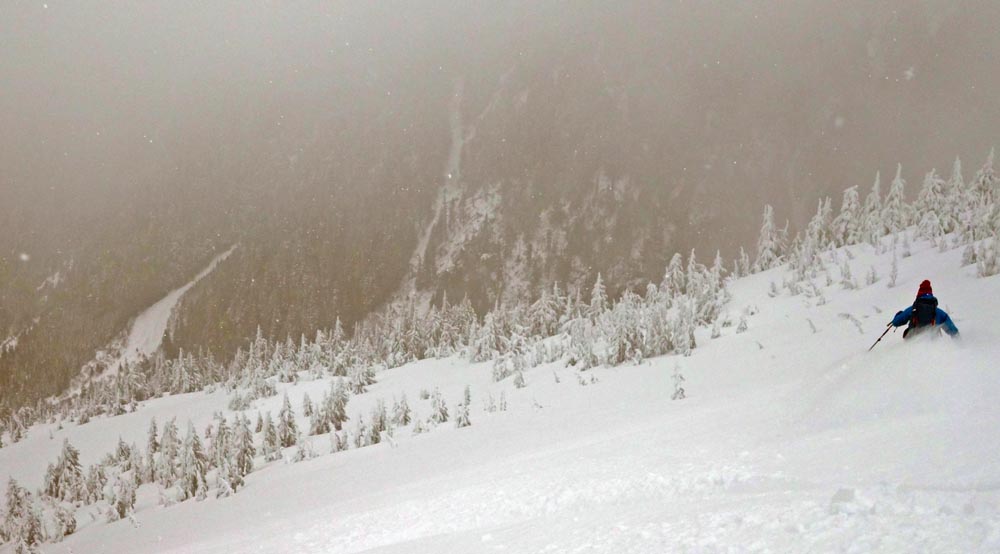 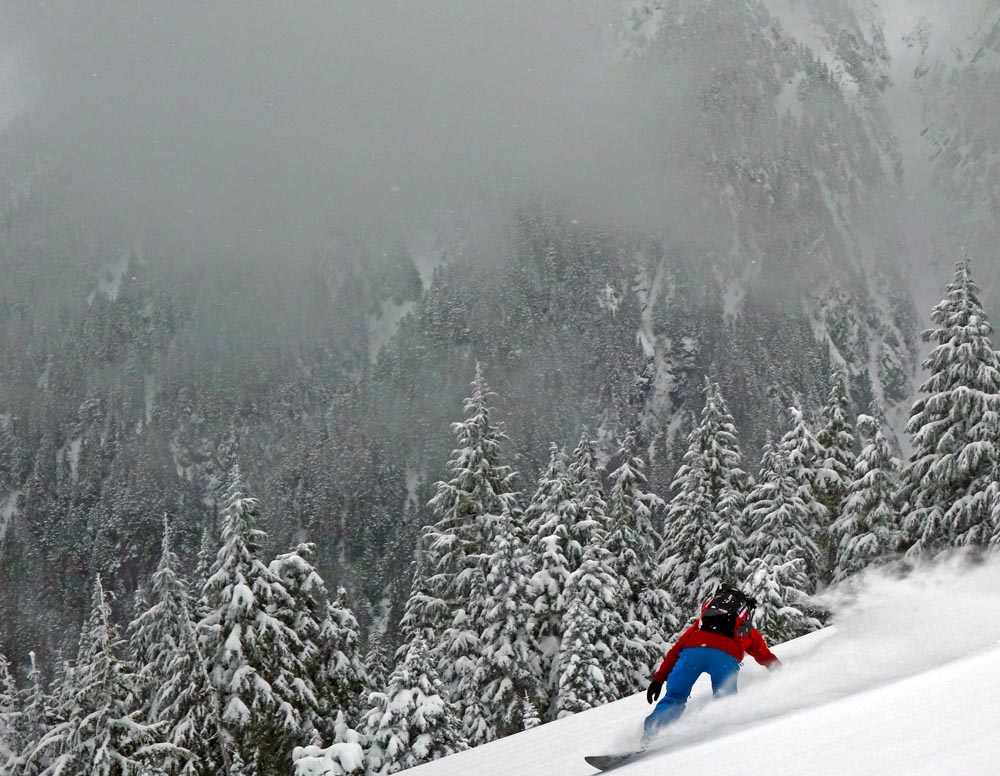 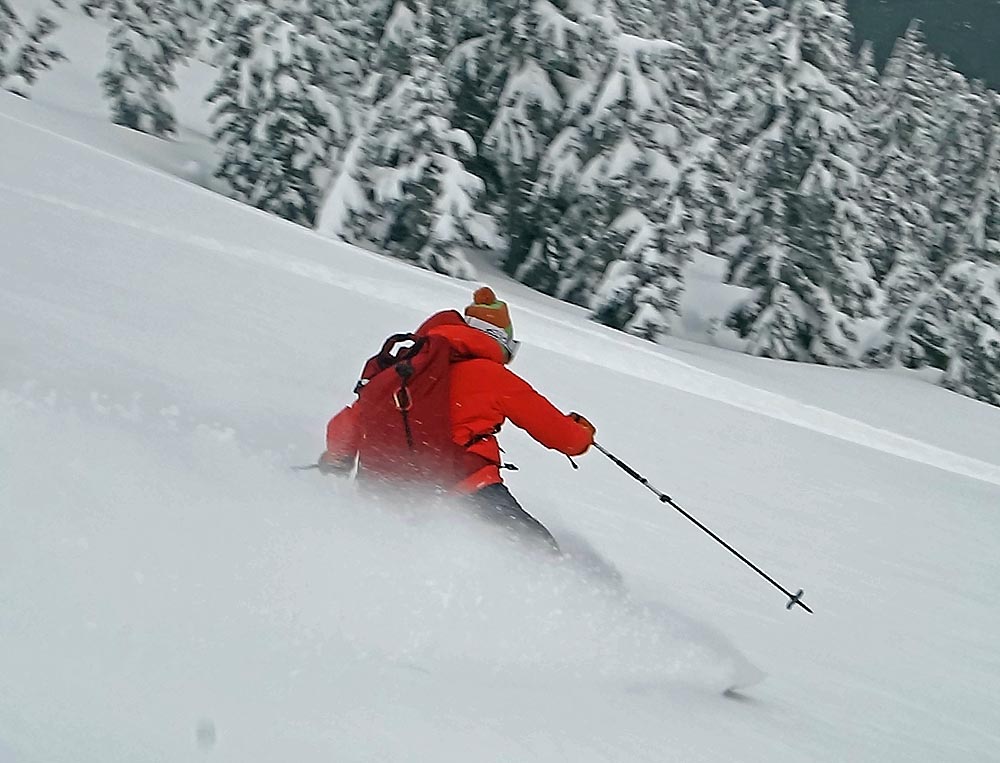 The next few days settled into a routine. Terrace’s backcountry access is so incredibly easy. Trailheads were about a 15 minute drive. Snow coverage was so good that we could easily bang out 1500m days even with a crack of 9am start and be done by 4pm. There was always time to get back to Sherwood for more Growler fills and to meet Daryl the brew master seen below holding court at a St Patrick’s day event. 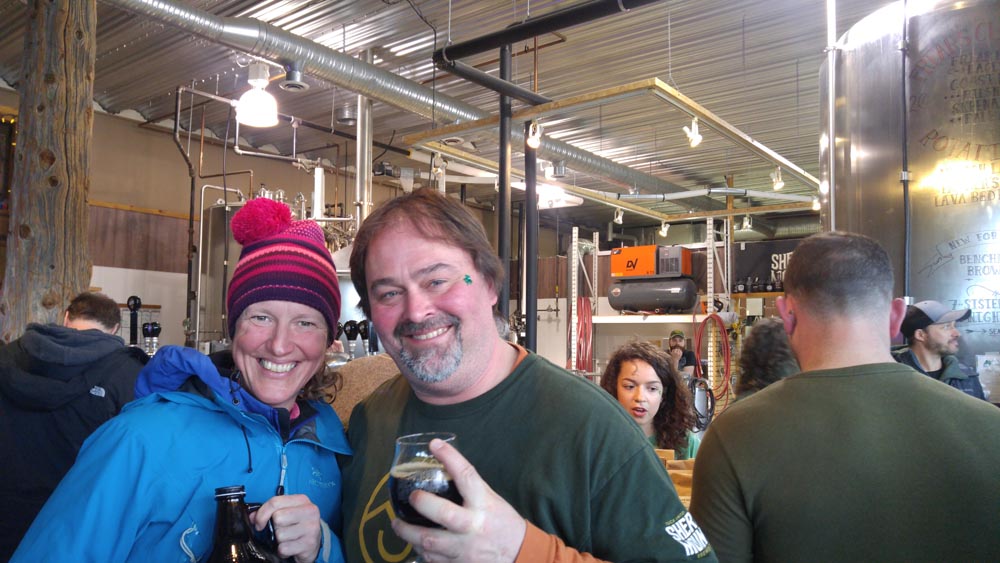 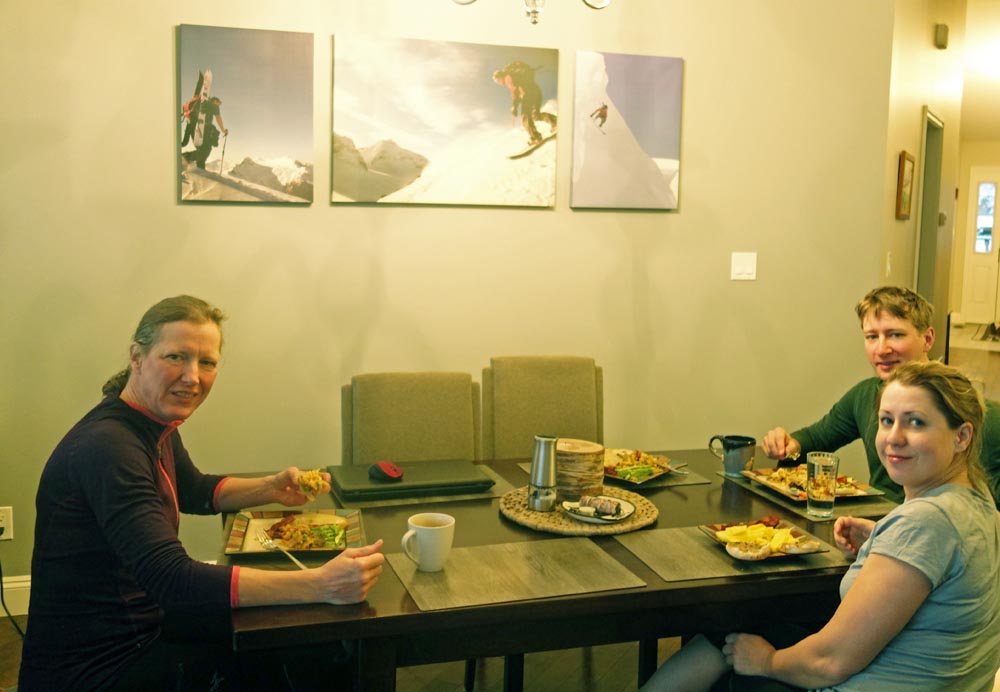 Another sled access area was also 15 minutes drive from town and had the choice of big W and S facing bowls with N facing snowfields and glaciers with potential views stretching on all points of the compass. Access was again so simple with more new light powder snow to valley floor making for super easy tows. Weather forecasts gave us a chance of broken skies so we headed up with the hope that we would get bluebird.

All things looked well as we headed in to a massive alpine bowl with valley fog and bluebird skies tantalizing. We went up a S facing slope with almost zero solar effect and broke trail through light powder (S facing powder in March!!) but the clouds swirled and grew as we got higher and higher. Treeline in this part of Northern BC at 59 deg lat is only 1400m and soon we were in alpine in pockets of variable visibility. Unfortunately weather never really gave us a clear break so we Stevie-wonder’ed back down using our skintrack as a handrail and retreating back to valley floor down those same S facing slopes in a magnificently fast powder run.

We go up into the clouds

Which came in and out all day

We retreated down the open slope 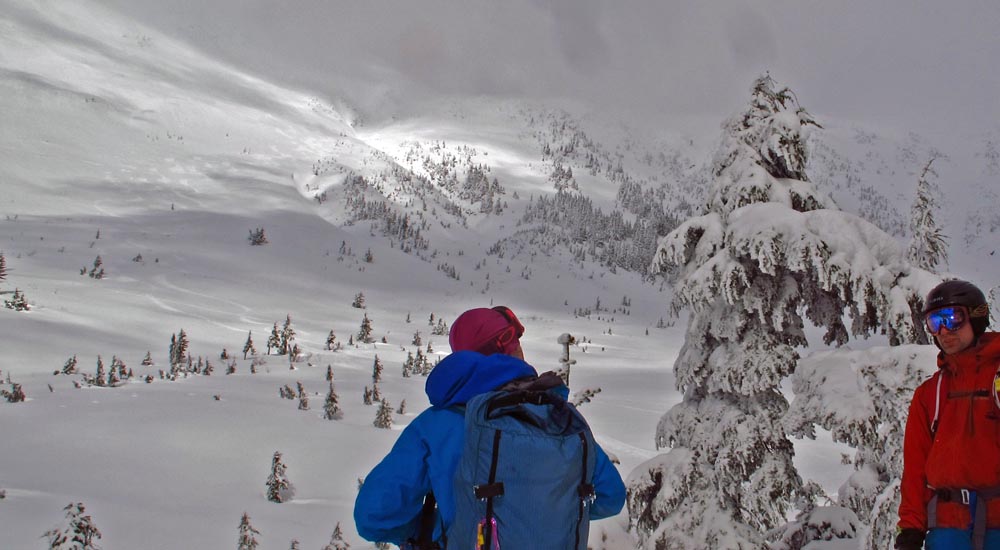 Our tracks and other options lookers right on better vis days

We were then joined by Tyler of Northern BC Tourism for another round of FOOOD! Always welcome after ski touring. This time we had dinner at Thornhill Pub – Good solid pub food with massive portions! 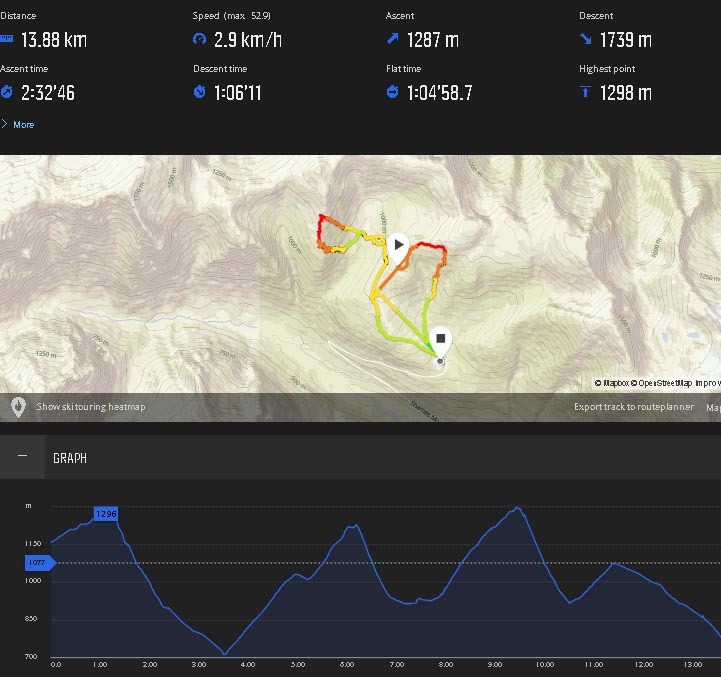 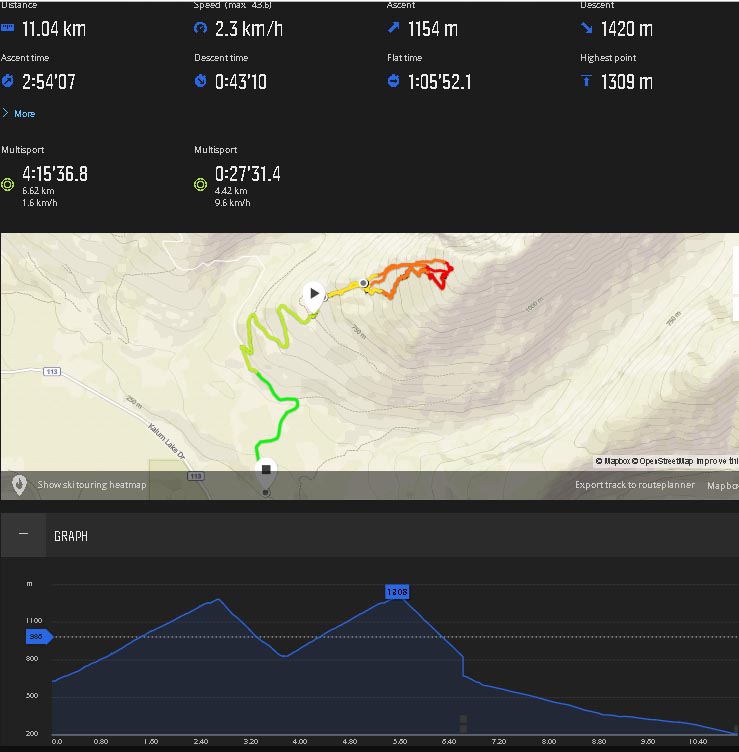 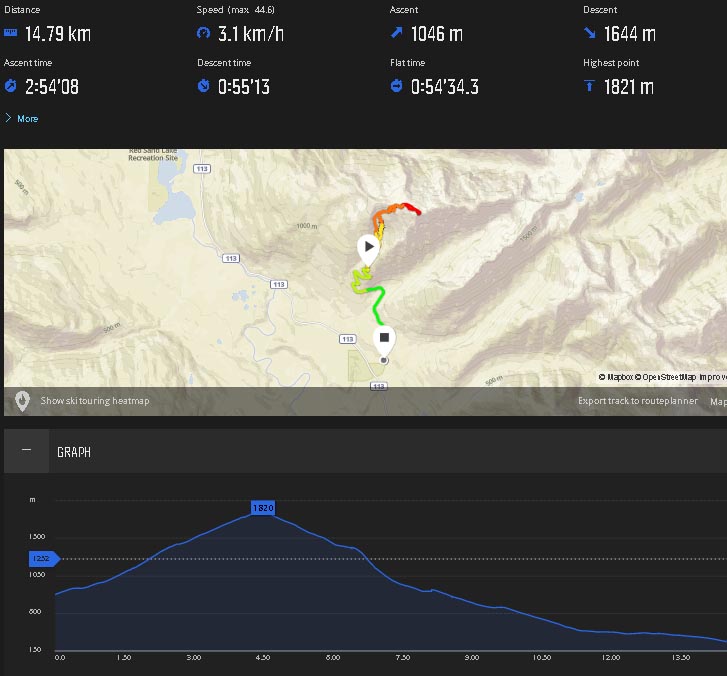