One of the things we learned during our trips to the American Southwest that most people don’t seem to realize is that before the Native Americans came the Puebloans.

Actually many people seem to think that civilization started with Amerigo Vespucci or Christopher Columbus and that everyone else were unclothed savages before then. While the Puebloan indians lived on this continent for 100’s of years, their cultural history has not been passed on due to their lack of a common language or written history.

Chaco Canyon was one of their cultural centers from AD850 – AD1250. After this time the people migrated to areas such as Mesa Verde, Canyon de Chelly and beyond. These areas were subsequently habited by the Navajo in the 1400’s. They lived there until the 1540’s when the Spanish came in search of Gold. The Spanish, being Roman Catholic, were intolerant of the Navajo and Puebloan religion and went about to convert the people. They also enslaved the people and introduced to the Natives Small Pox. Following a century of subjugation by the Spanish, the Puebloans Revolted in 1680. A time of self rule persisted until the leader of the revolt Pope ( Pronounced Po-PAY) died. At this time the Spanish again reconquered New Mexico.

New Mexico became a part of Mexico, independent of Spain in 1821. In 1850 New Mexico became a Territory of the United States. At this time the Americans began rounding up the Native Americans and sending them to Fort Sumner, NM. The Navajo did return to this area and were involved with subsequent archeological digs since the 1890’s when excavation of Chaco Canyon began.

The loss of Puebloan culture can be attributed to their lack of a common or written language. The constant war and colonization resulted in the Puebloans integrating with the Navajo communities. Despite their turbulent recent past 23 puebloan tribes persist in New Mexico in and around Santa Fe.

The construction of Chaco Canyon can be dated by the type of Masonry used to build the walls. The following picture shows three walls, the furthest is the oldest with more plaster then brick – Type I masonry built in the 800’s, the next wall is typical of Type II masonry with large bricks interspersed with smaller pieces. Type III is characterized by similar sized bricks with less morter and tapered walls to allow floors to be built up. 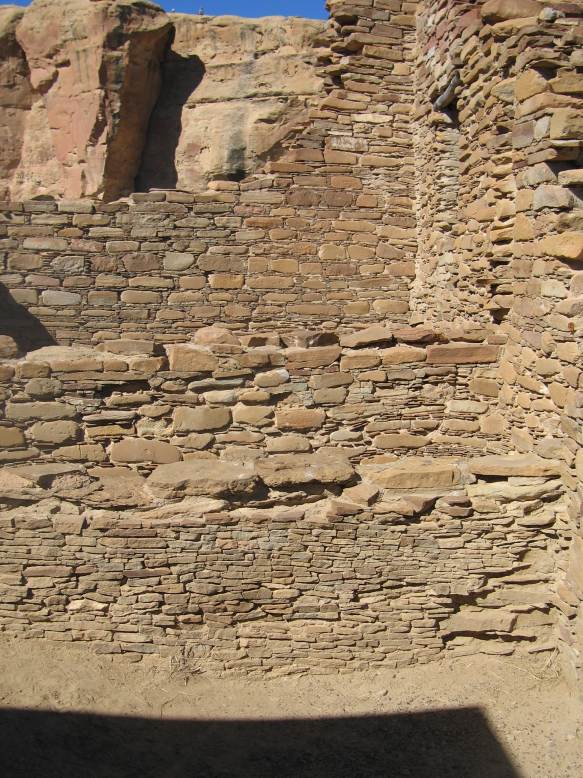 You can see the Vigas (1o Supports) and Latillas ( 2o supports) poking out of the walls of adjacent rooms. The Vigas are wood ceiling supports made up of Pondorosa Pine or Juniper Trees. The Puebloans who built these structures carried the trees 60 miles since there is no evidence of large forests in this area. >200,000 Trees are have been used for Vigas in Chaco Canyon. This picture shows evidence of a three story structure. Tree ring datinghas been used to date construction of Pueblos in the Four Corners Area. 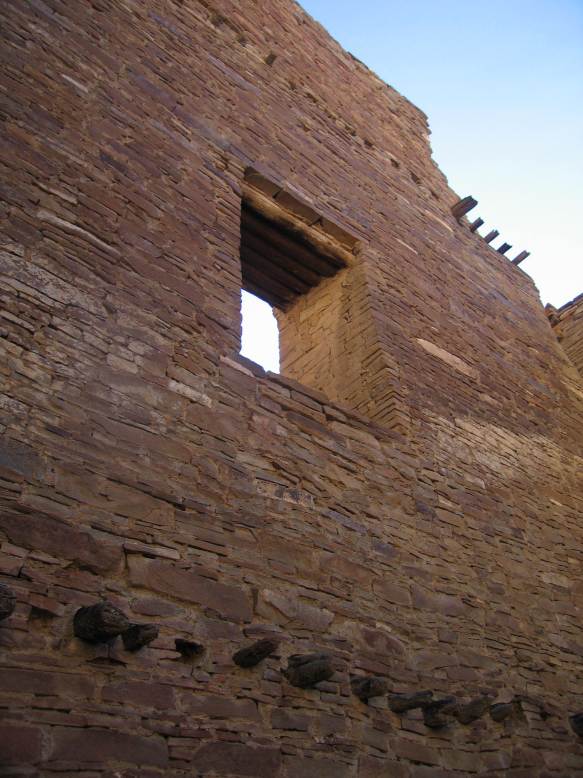 The Canyon wall can be seen from some windows of Pueblo Bonito. 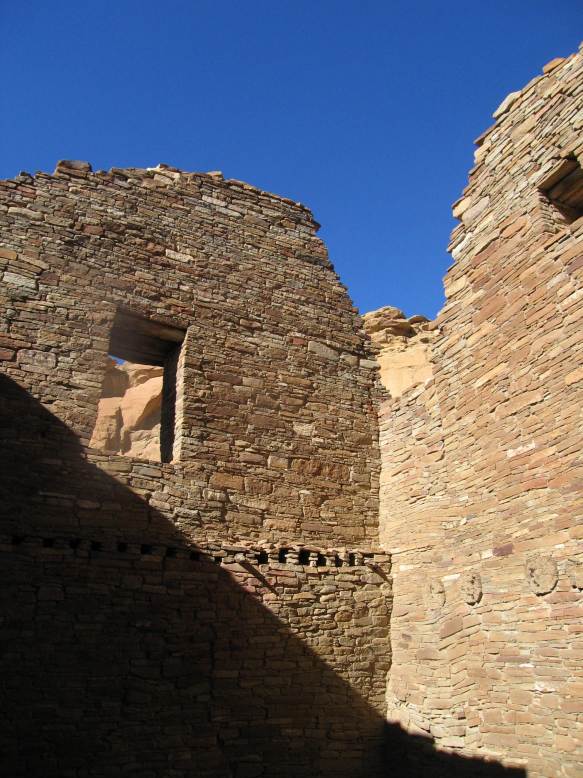 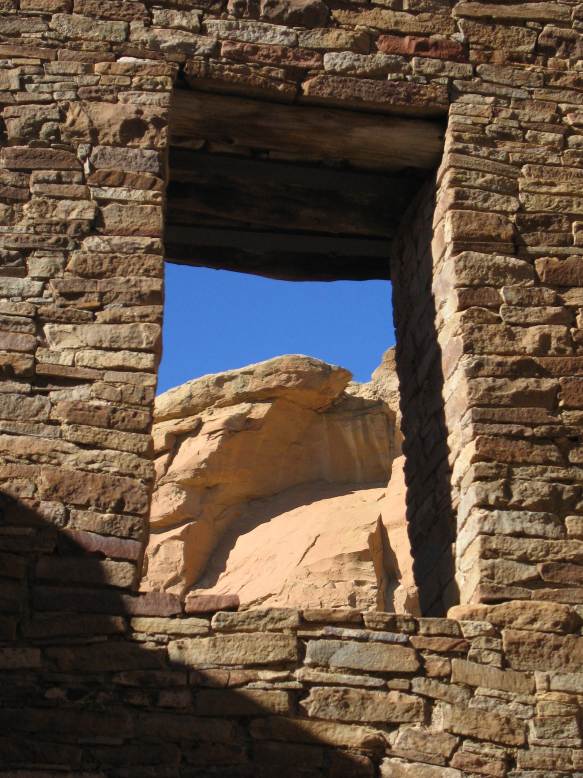 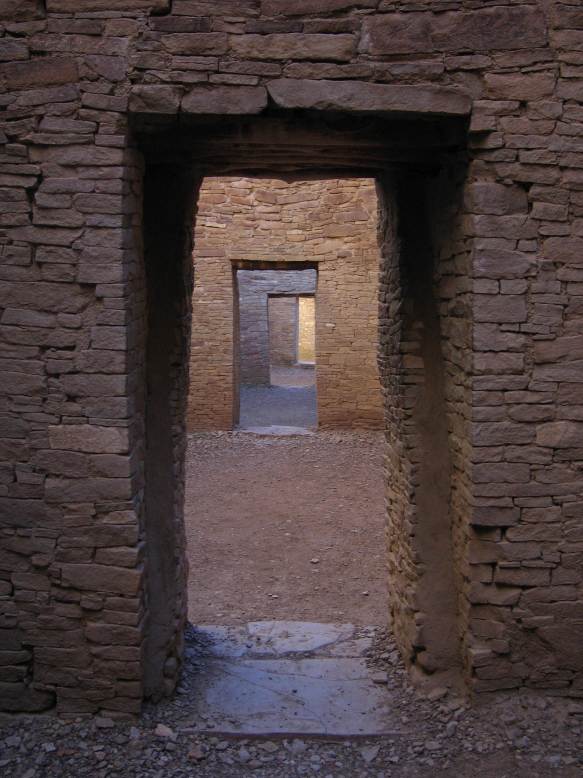 After our tour of Pueblo Bonito we were off to the campground! 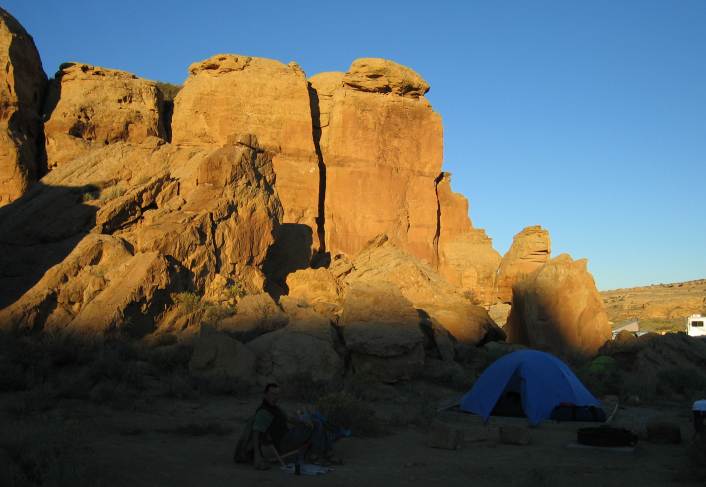 The next day we rode to the Pueblo Kin Kletso to hike up the Mesa behind Pueblo Bonito. Kin Kletso seems to have been built in two stages. The first one dates from about 1125, the second from 1130 or later. This great house had about 100 rooms and five enclosed kivas and may have risen three stories on the north side. Note the more recent ‘McElmo’ masonry. 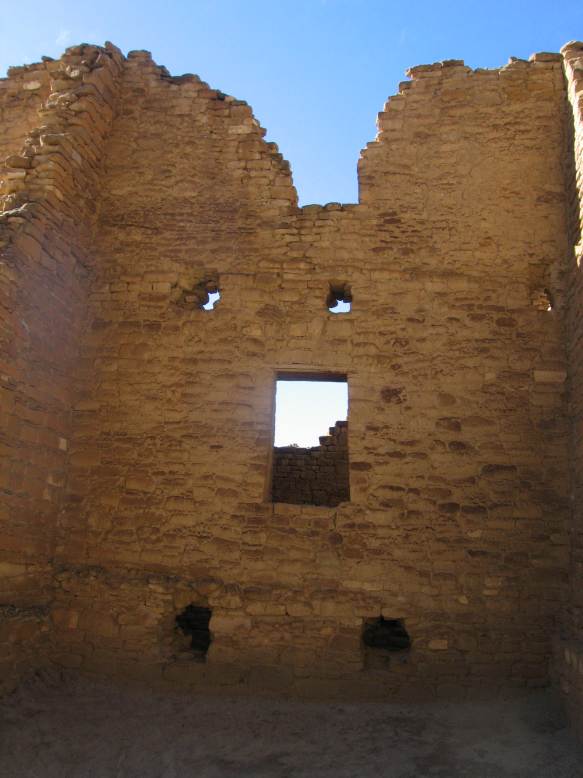 The start of the Pueblo Alto Trail. This trail leads to the top of the mesa overlooking Chaco Canyon. The first part is quite steep! 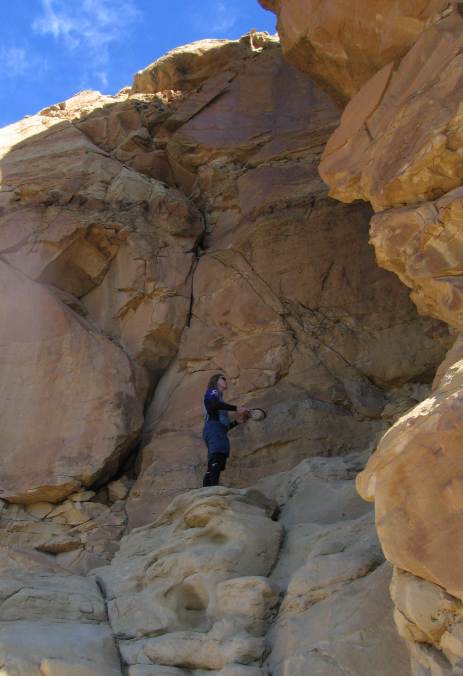 Hopefully nobody got stuck in here and had to cut off their hand!

View of Kin Kletso from the Mesa Top. 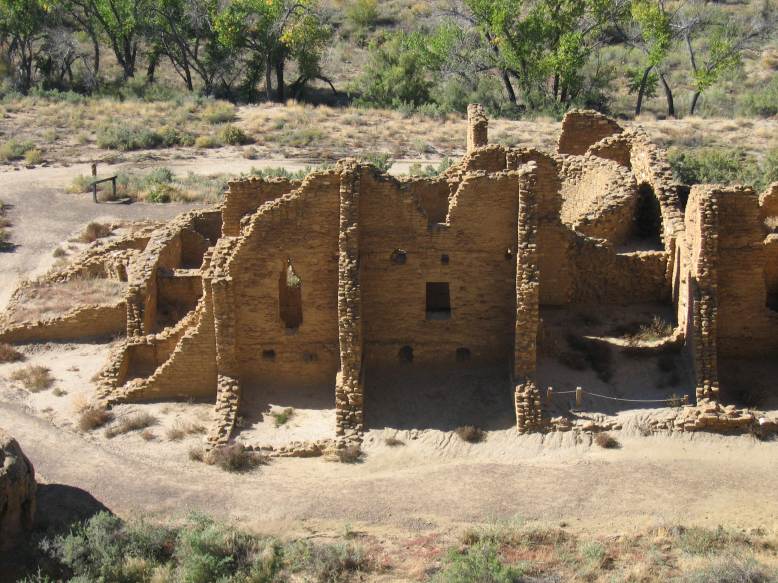 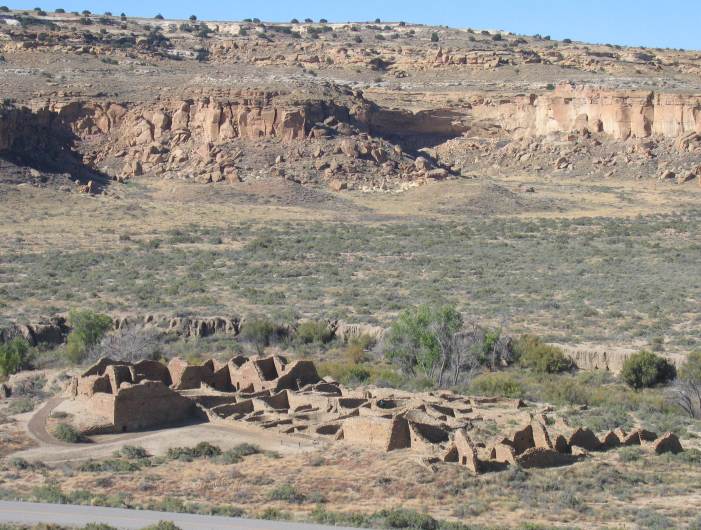 We hike along the Mesa top trail guided by the many rock cairns built by the Sierra Club who obviously had nothing better to do that summer!

For some reason Lee found the visual pollution of the cairns quite annoying. We only hiked to the overlook of Pueblo Bonito. This trail loops to Pueblo Alto for a 8.7km Trip. 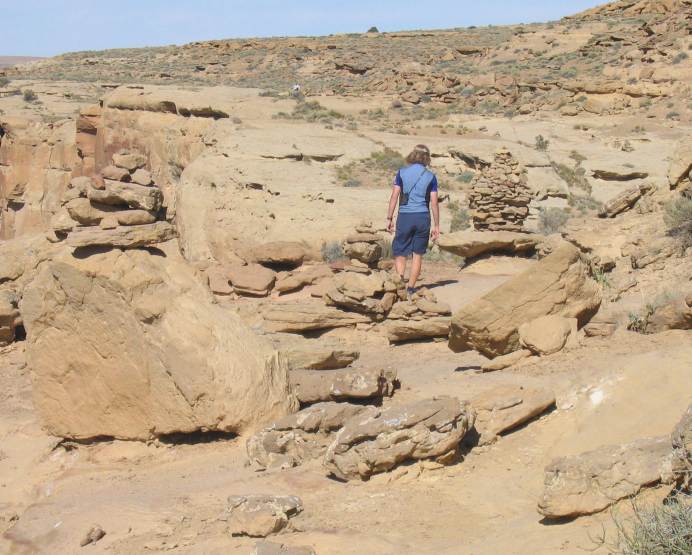