I’ve never ridden at 12,000 feet before. Heck, usually at that altitude, I’m pretty happy to be able to put one foot in front of the other and stumble along. The Monarch Crest trail is one of those classic Colorado singletrack trails that puts you at that altitude and then some. The day before it had been just above freezing and winds of 25 to 30 knots at the trail so we were all bundled up in anticipation.

From L to R: Me, Kevin, Sharon, Bill, Carl; Joel (behind) and Tom – our genial Salida Host. 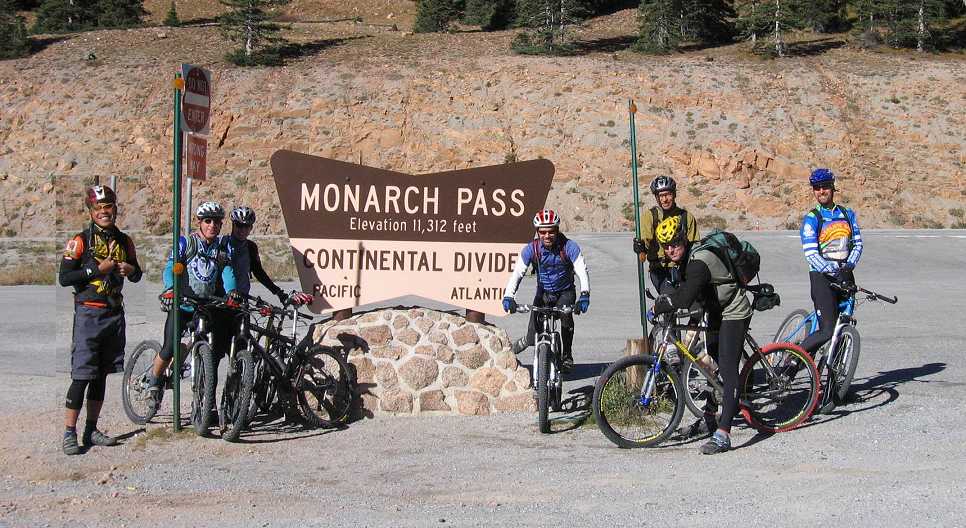 We register at the trailhead. While there is an elementary map online, the best map of the trail can be found at Absolute Bikes. Given the consequences of getting lost up here, its a recommended purchase. Today, we are lucky to have Tom Purvis of Absolute Bikes along with us to play tour guide. 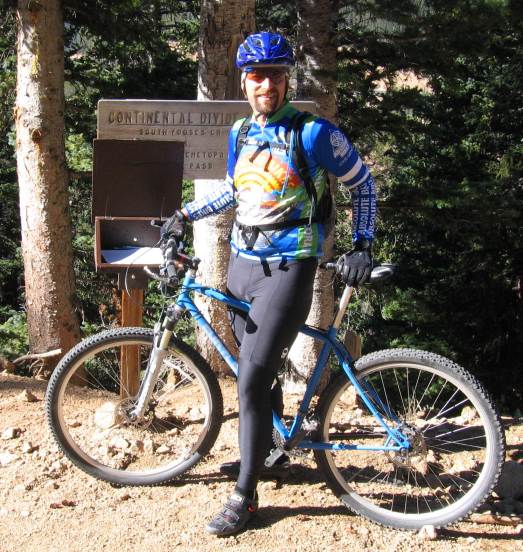 Bill and Tom cruise along the first part of the trail. We climb about 400 feet in the first few sections. The Monarch ski hill and the trails of Old Monarch Pass are in the background. 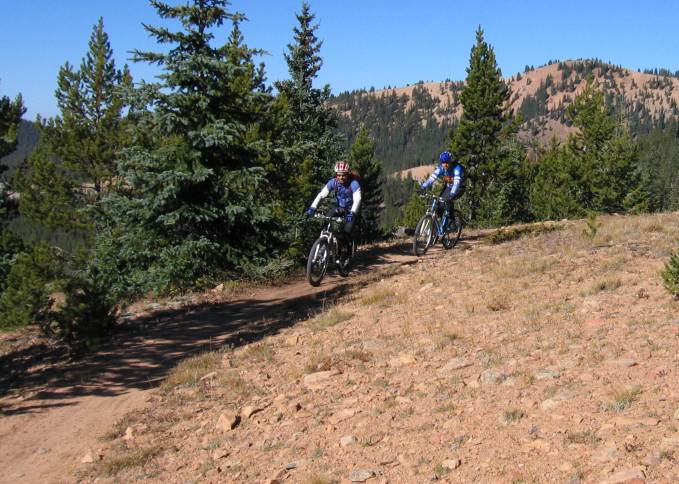 Sharon grinds her way up the first steep part – need my EPO now! The building in the background is a radio tower on Monarch Ridge. I don’t know the name of the alpine peak but it looks at least 13,000 feet 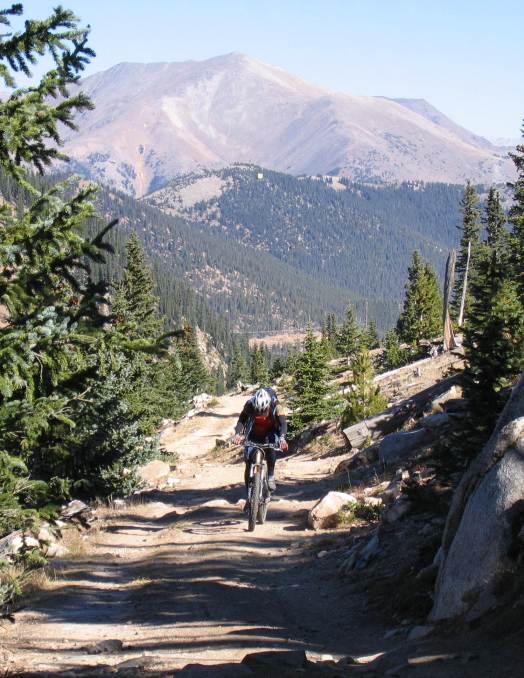 Joel leads the peloton of Tom and Kevin out on a false flat before we start more climbing. All this singletrack is on the Continental Divide 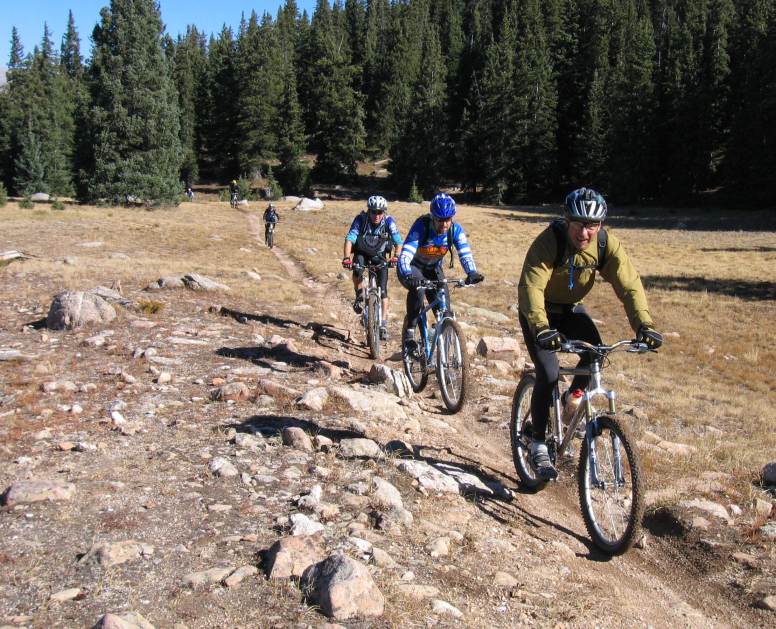 Sharon leading out Bill and Kevin. 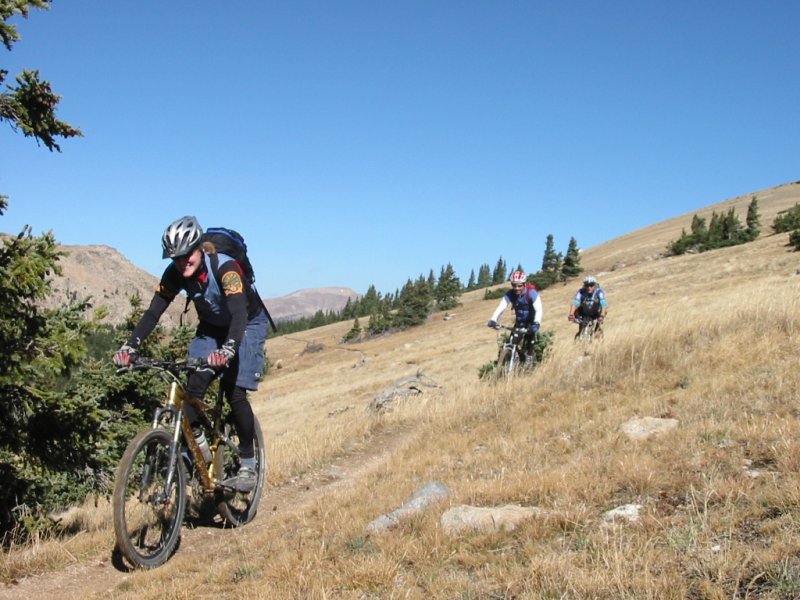 About 2 miles in, rounding Mount Peck, the ski runs of the Monarch Ski Run still in sight and looks like Sharon is starting to enjoy herself. 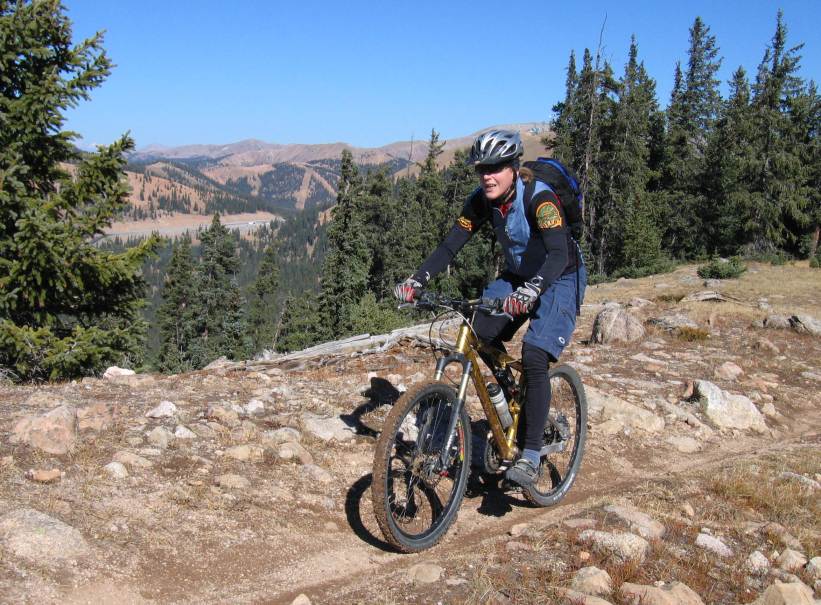 Kevin leading Carl on the climb to the high-point before we start our descent to Green Creek. 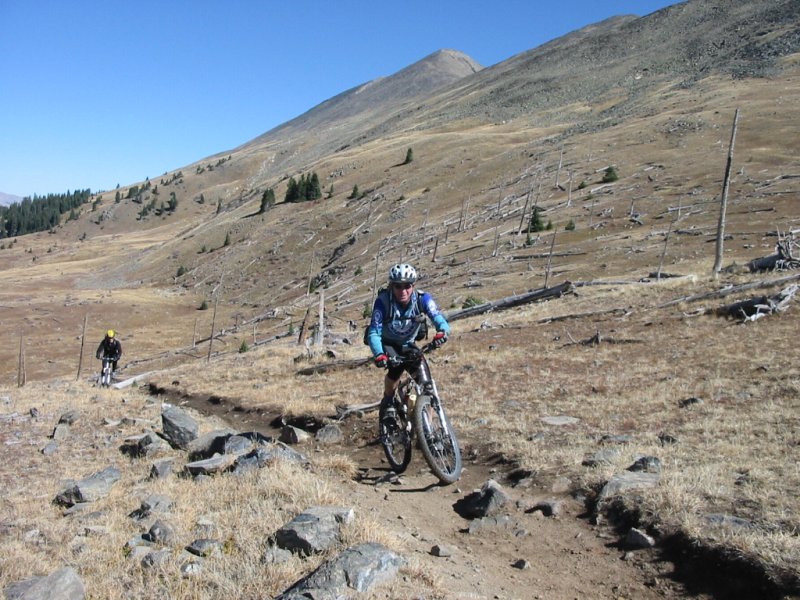 The trail itself is in great shape and the day is shaping up to be a classic. Wind is minimal and its not cold. Carl leads. 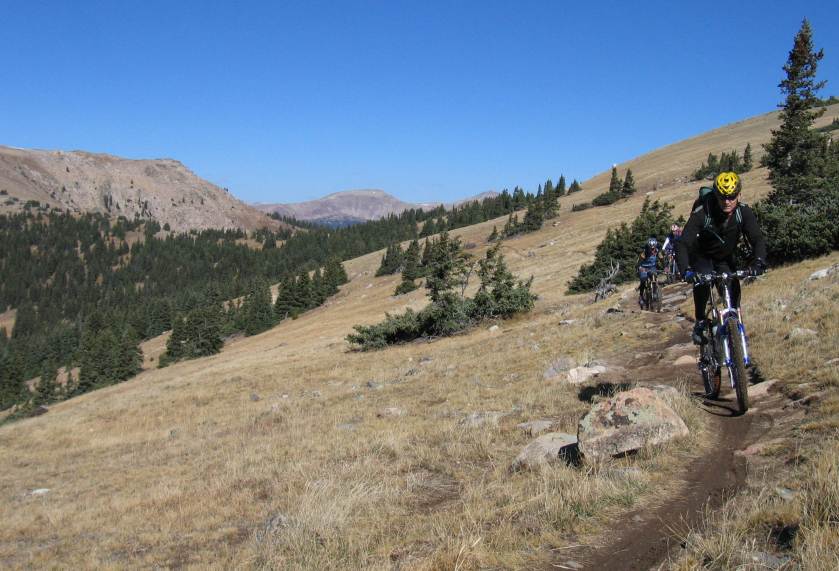 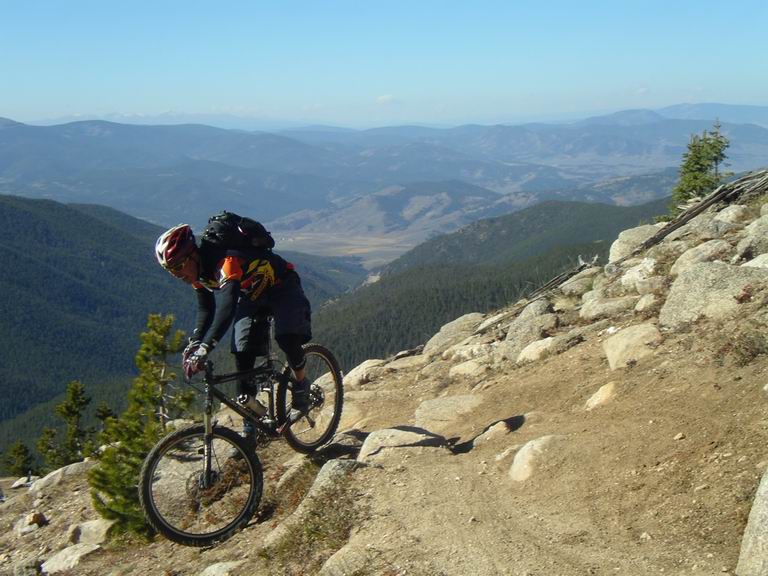 The group approaches Tomichi Dome to the north. The snow is from a week ago. 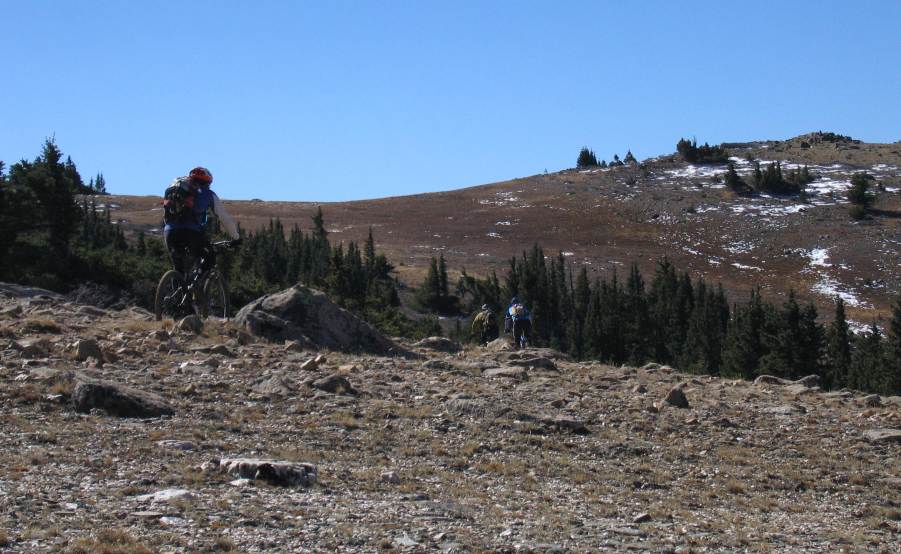 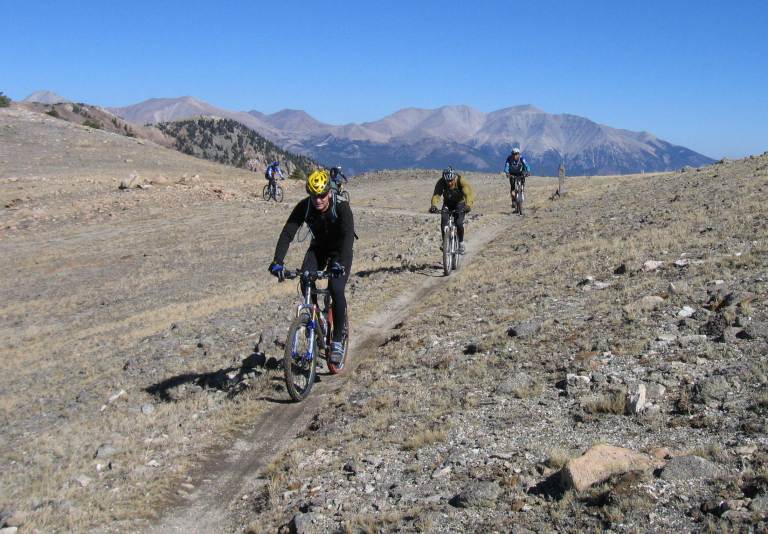 This marks another flattish portion of trail levelling off at about 11,800′ before we drop 500′ to the junction of the Monarch Crest Trail and the Green Creek turnoff 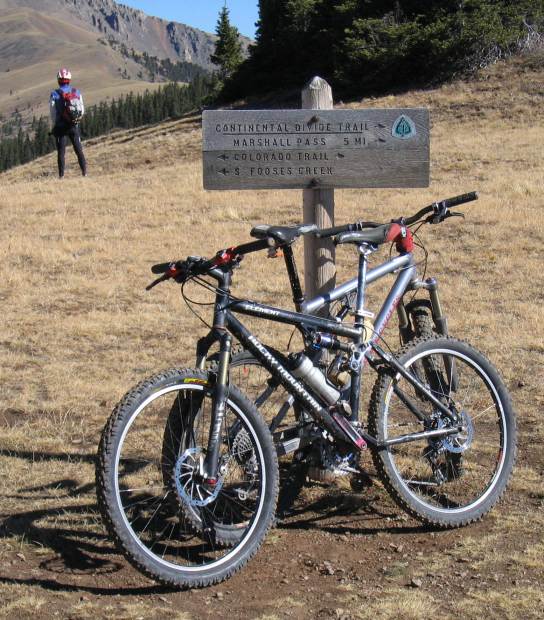 Tom with Pahlone Peak (12,662′) as the backdrop. Living in Salida appears to do wonders for one’s fashion sense and oxygen capacity. 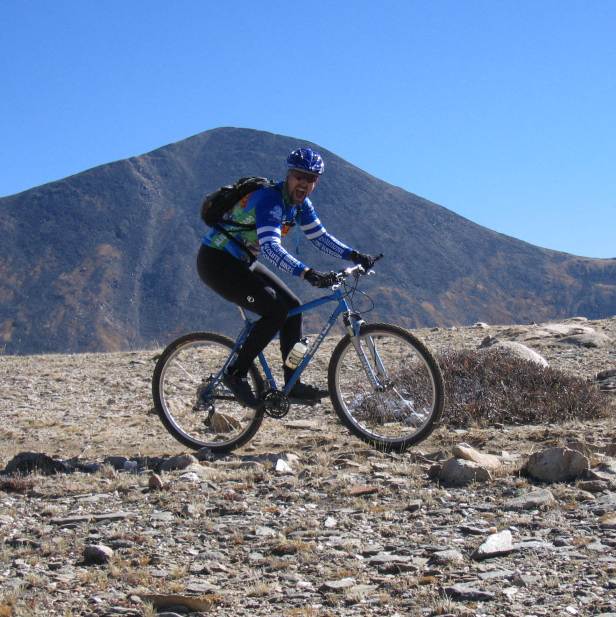 Kevin later confesses that he too is feeling the altitude. 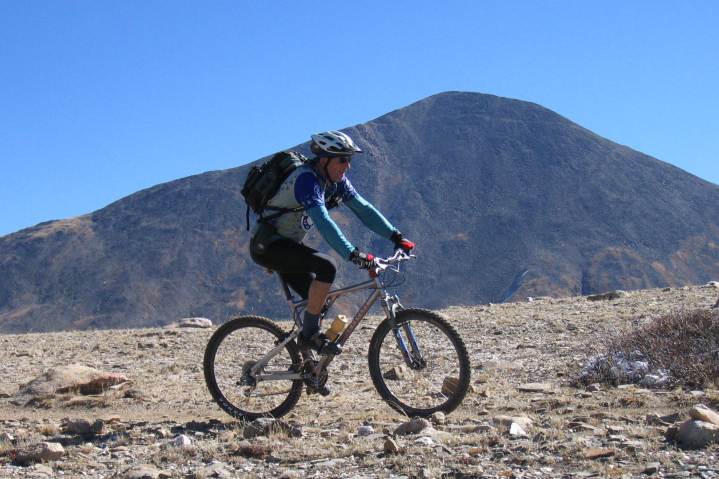 Bill descends the Continental Divide as the Monarch Crest heads to Green Creek. Agate Creek peels off to the west – picture right

Sharon, Kevin and Joel level off at about 11,300′ at the turnoff to Green Creek where a warming hut/emergency shelter is located. Chipeta Mountain (12,850) is the backdrop. 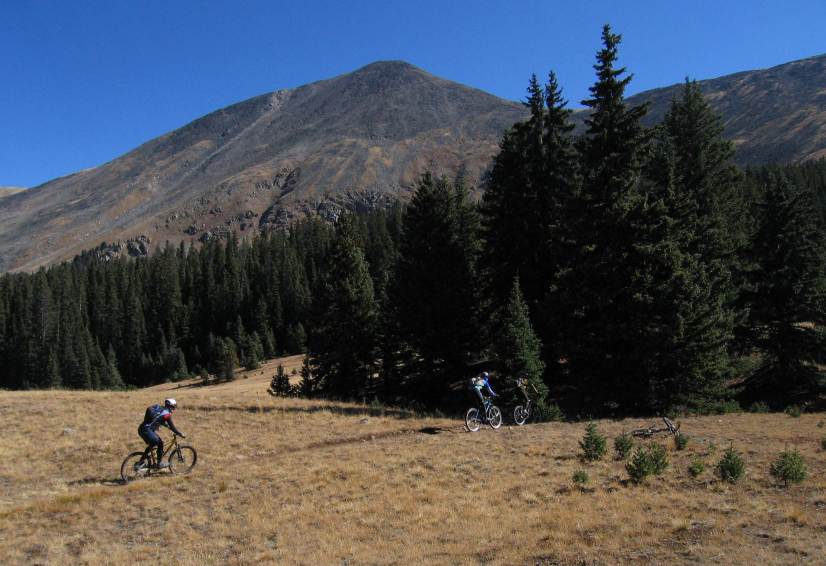 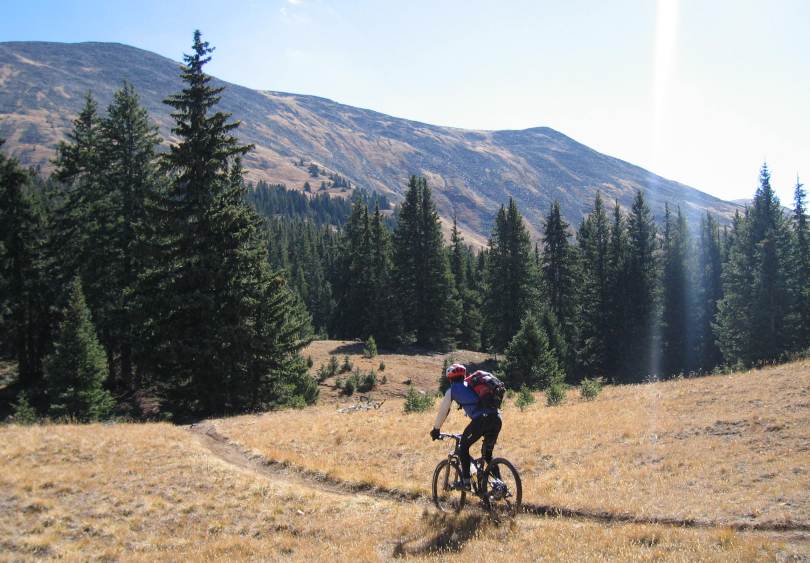 After descending to Green Creek, there is more climbing before you get the sweet loose descent to Marshall Pass. There’s not too many pictures of this descent as it really was much too fun to stop. Here’s one section of fast twisty turn switchbacks. 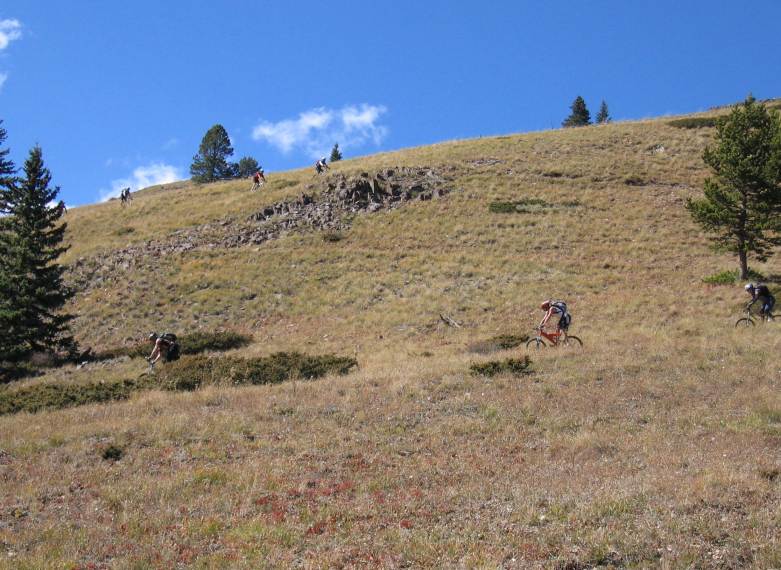 Bill descending on the Silver Creek trail. We’re now past Marshall Pass – a non-descript parking lot to which you can drive. By now we’ve dropped to about 10,000′ which is just below the peak of Mt. Baker, for us Pacific North-westers. Usually at this elevation I’m in crampons and ice-ax and roped up for glacier travel. 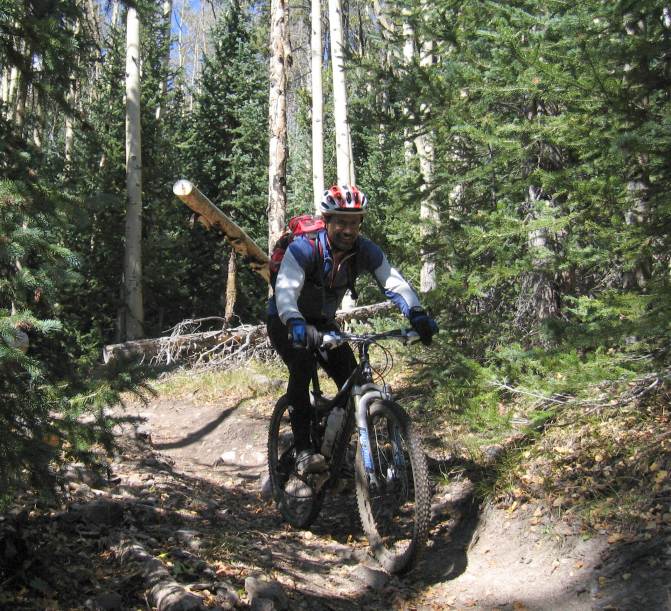 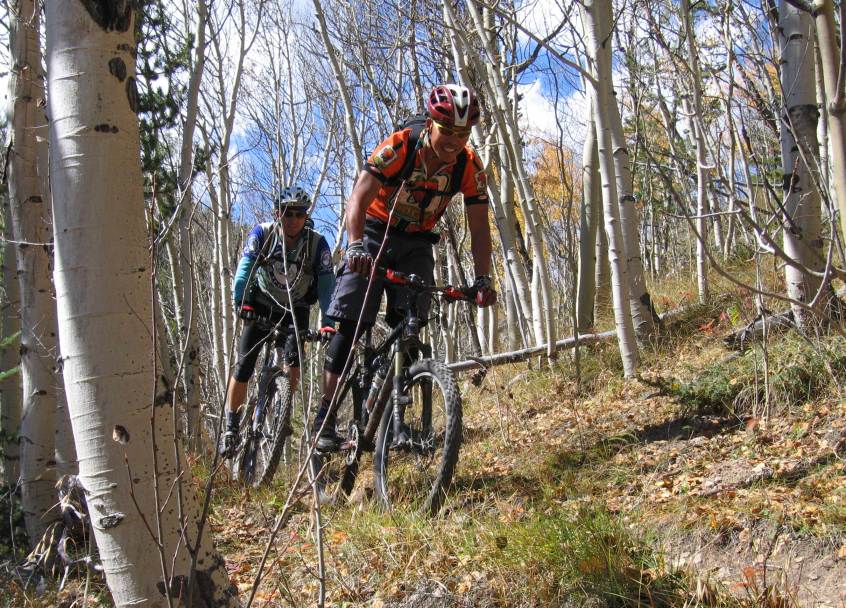 The aspens are still very much in fall color all along the Silver Creek trail leading to the west end of Rainbow trail. 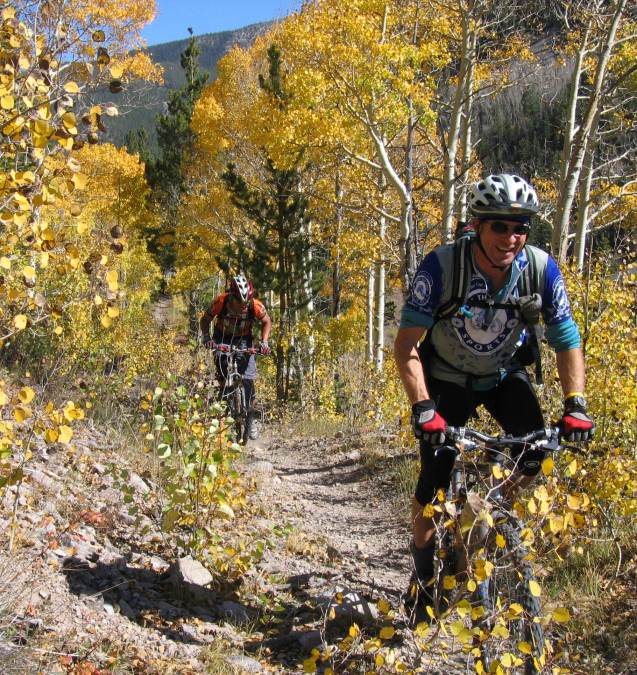 Sharon navigates a rock garden as we get closer to the creek. 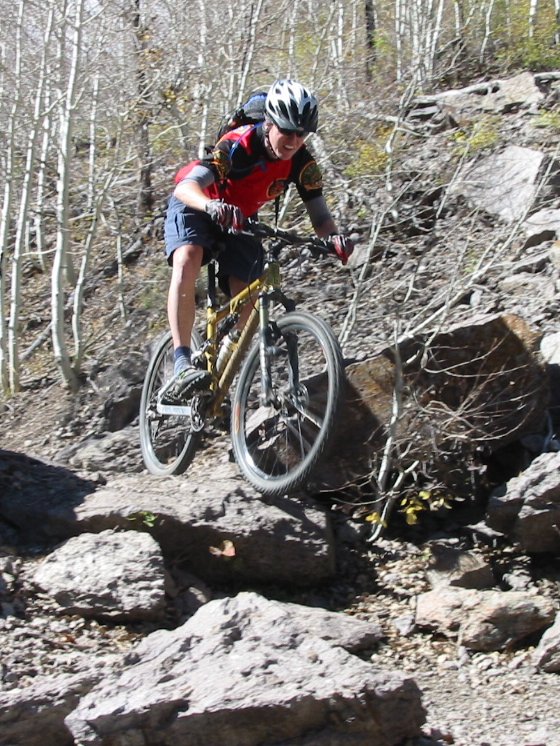 Then we get some fast flowy smooth singletrack along the Rainbow trail. It’s really too bad I’m so bagged at this point – the trails are fast and bermed so you can carry your speed. Every now and then there’s a steep descent followed by a few heart-stopping granny gear grind climbs. Good thing we’re only at about 9500′ – which, at this point, feels like we’re drowning in oxygen.

Here I am hamming it up for the camera on a berm spooking out Kevin following behind with my squirrely downhill technique. 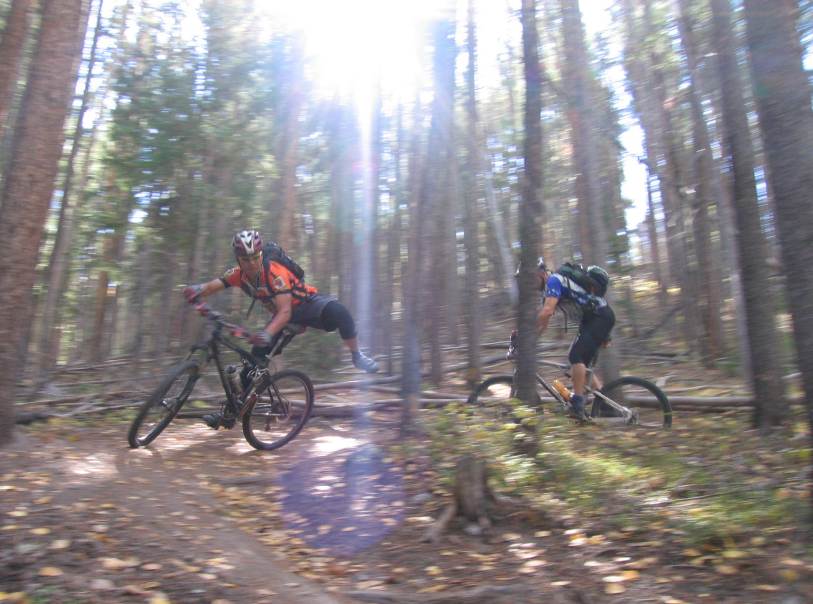 Charging into a berm. 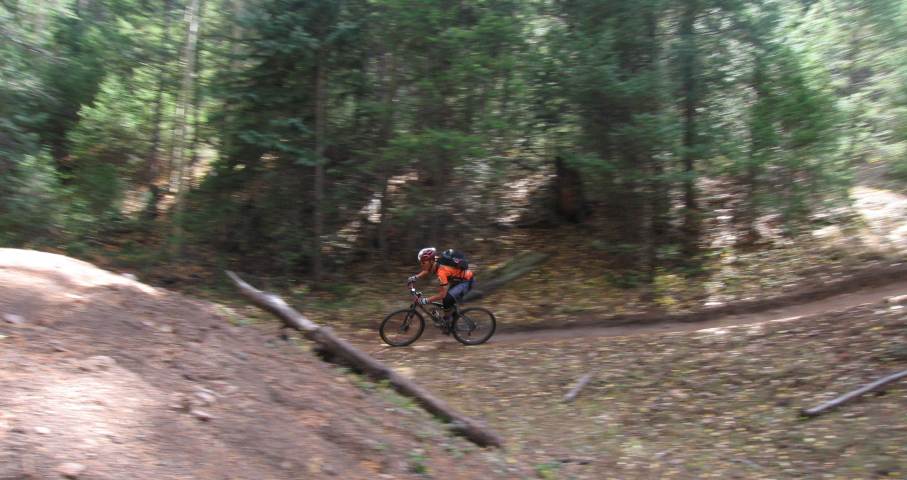 Me, Kevin and Joel in the sage on the finishing leg. 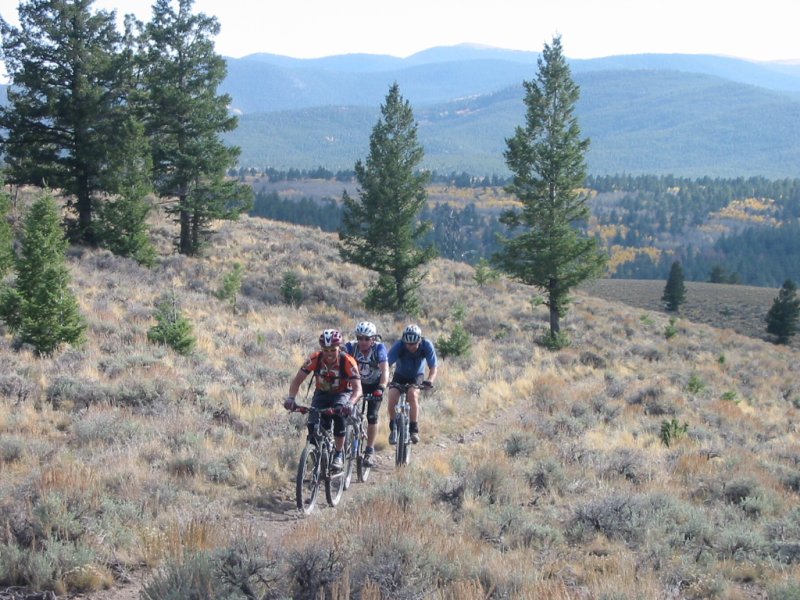 Rainbow trail is not just downhill. There’s vicious uphills and its with some sense of relief as we finally approach the end of the trail leading to the Salida highway. 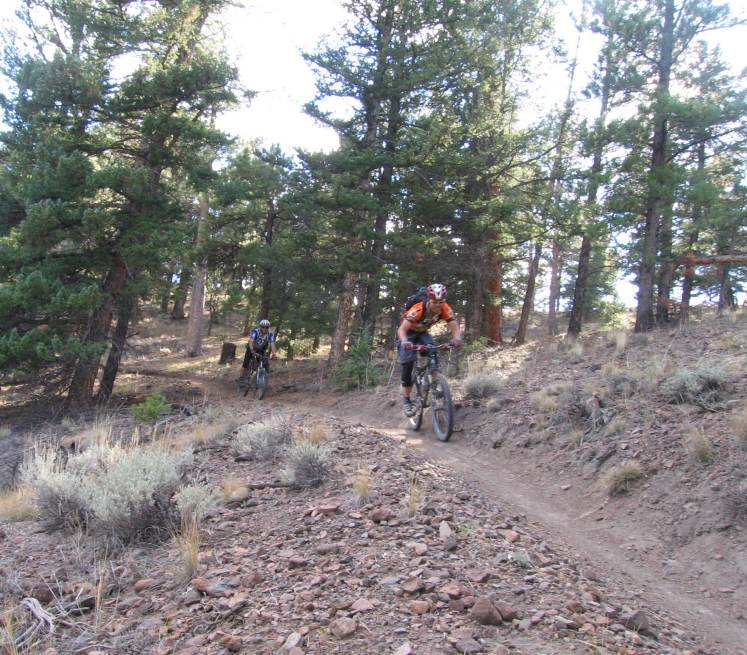 Sharon finishing the ride with some speed. 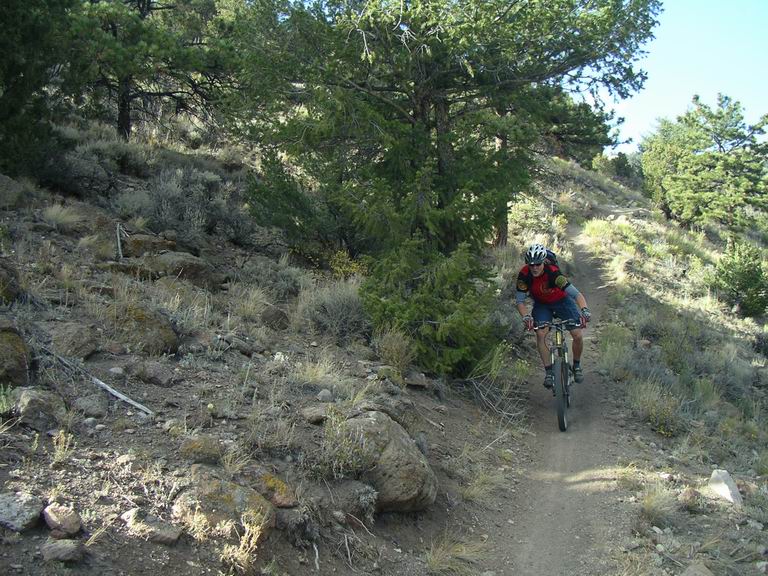 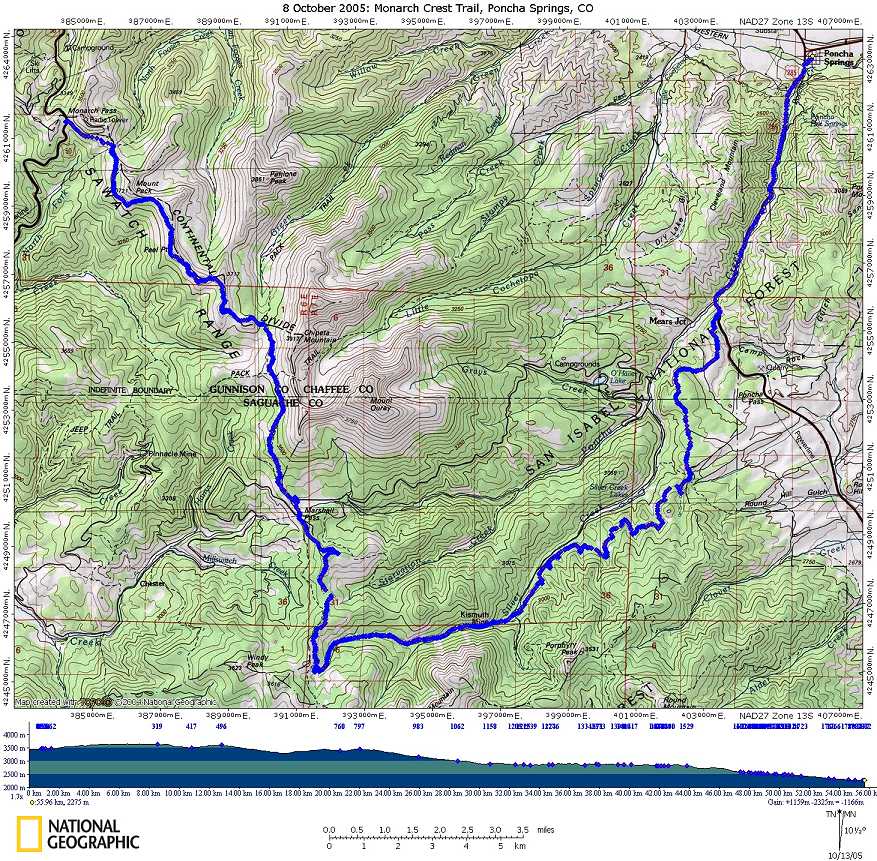