It’s a good thing we did a big ride on the Monarch Crest as it rained and rained the next few days. Carl and Joel had reassured us that it didn’t rain. Well it does – a lot. Our planned ride in Taos on the South Boundary Trail was rained out on Sunday, October 9th. Instead we went equipment shopping with Carl and kitted him out for new Dynafit boots. Wake up on October 10th and its still raining. There’s only so much playing you can do with the cat so Carl drags our wet coast asses off to a local’s trail – Apache Canyon. He reassures us that its usually quite sandy so it will be Ok to ride in the wet.

Here we are dressed for success for desert riding. GMAB! 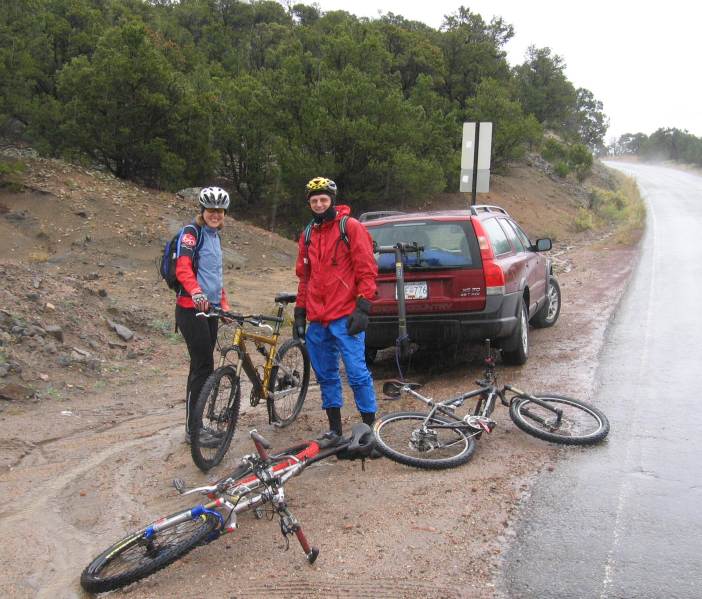 You won’t find maps of the Apache Canyon trails on-line. In fact even if you had a map I guarantee you would get lost immediately. Even though we’re quickly wet and conditions are less then stellar I can see the potential for multiple loops and long rides. We are told that the views of the Sangre de Cristo mountains from here are also breath-taking – we’ll have to take Carl’s word for it. 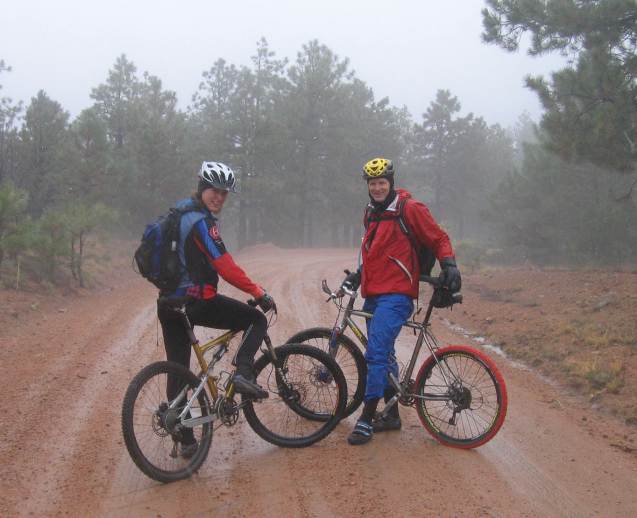 The trails wind in and out of the Apache Canyon network of trails itself – there are downhills to the creekbed followed by steep uphills. 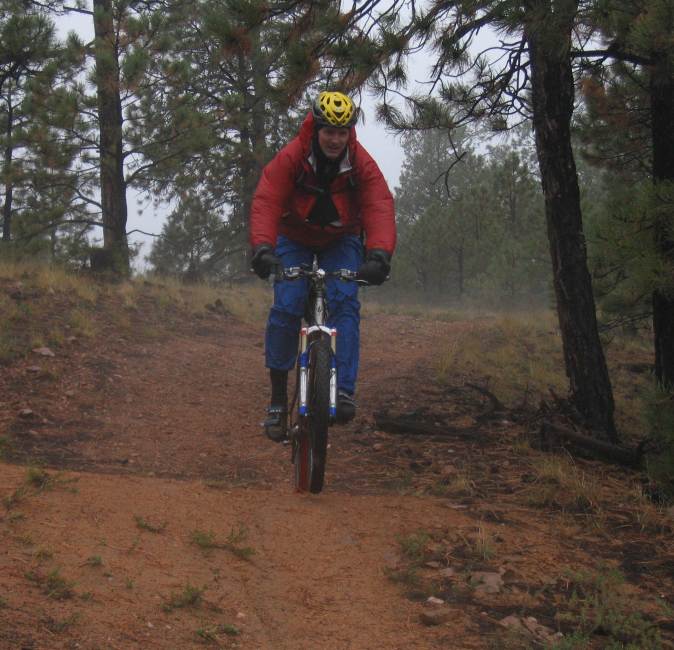 Sharon making the best of a wet jump. 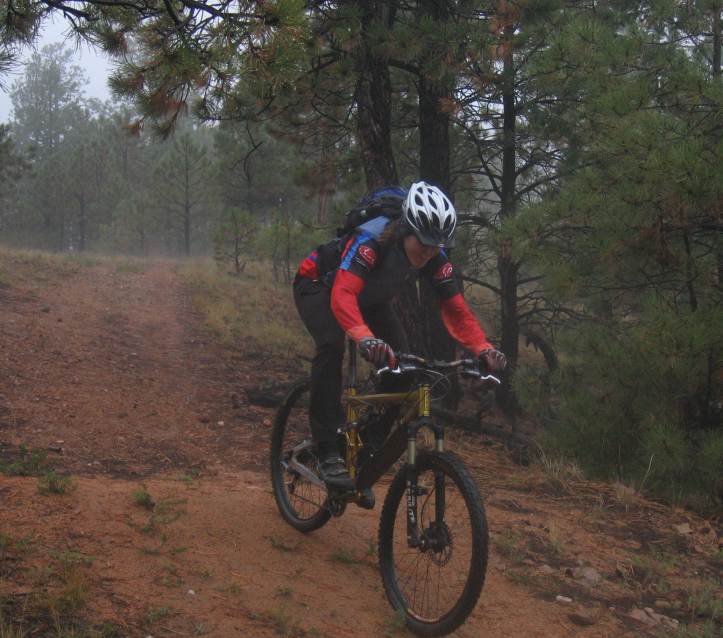 Carl is right when he says that the trail bed can take rain. Everything is well-drained so we don’t use up karma in eroding the trailbed surface. 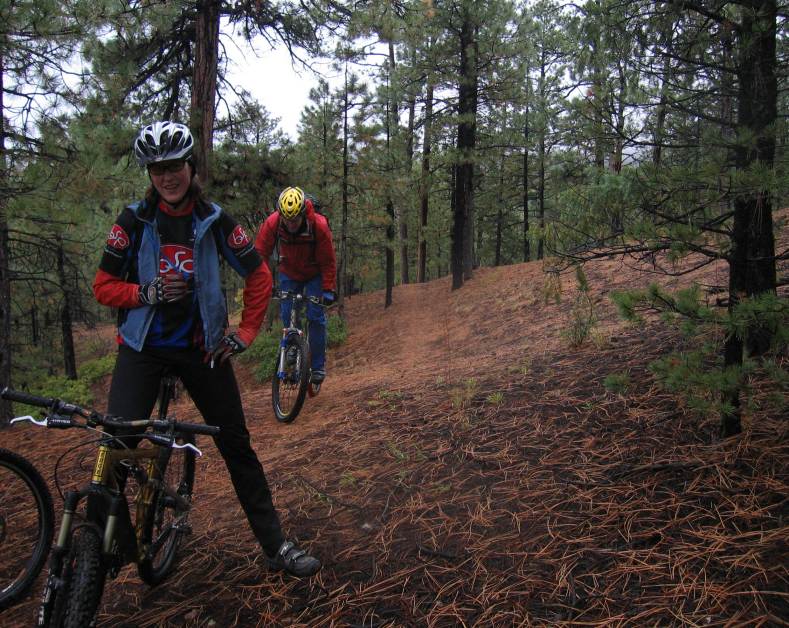 The ride is quite short – 25.8km and ascending 725m. It’s also at high elevation – varying between 7,300 and 8.500 feet but now thankfully we’re starting to get acclimatized. Of course, the clouds break and the sun peeks out just as we finish up. I guess this means that this counts as one of Santa Fe’s 300 sunny days a year. 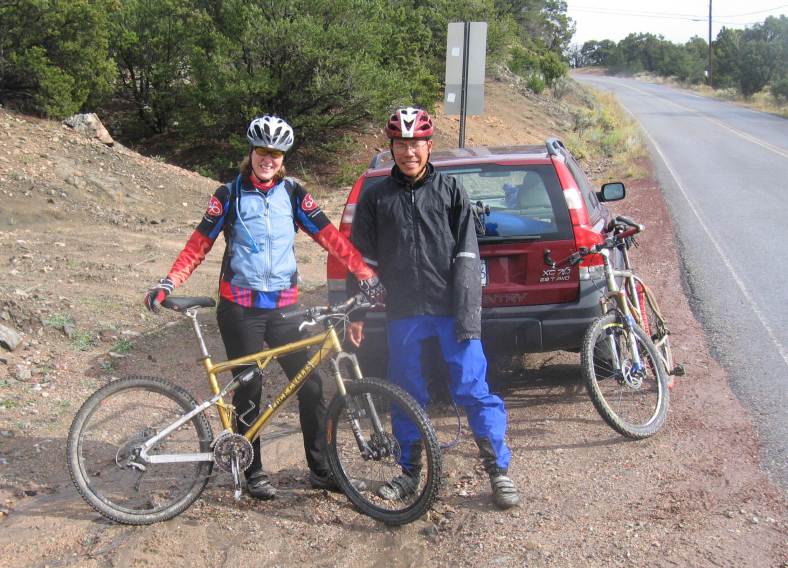 few words about Santa Fe. Despite the weather, what a beautiful city it is. I couldn’t believe that there existed an American city with culture that didn’t centre on Wal-mart. I can see why the New Mexican friends of ours love living there. Carl’s house seemed typical – adobe style – straight out of the Alamo. Not a lot of straight edges or sharp corners here. The city itself is really nice without being too ostentatiously touristy (other then the Plaza which cannot help but be touristy). One last thing, New Mexico’s Mexican food has spoiled me for any other Mexican food.

Below are two pictures of Carl’s place – inlaid tile on the bathroom floor and a gothic arch without any capital. Then note the living room – no plasma TV – and rounded shelving and corners. Classic! 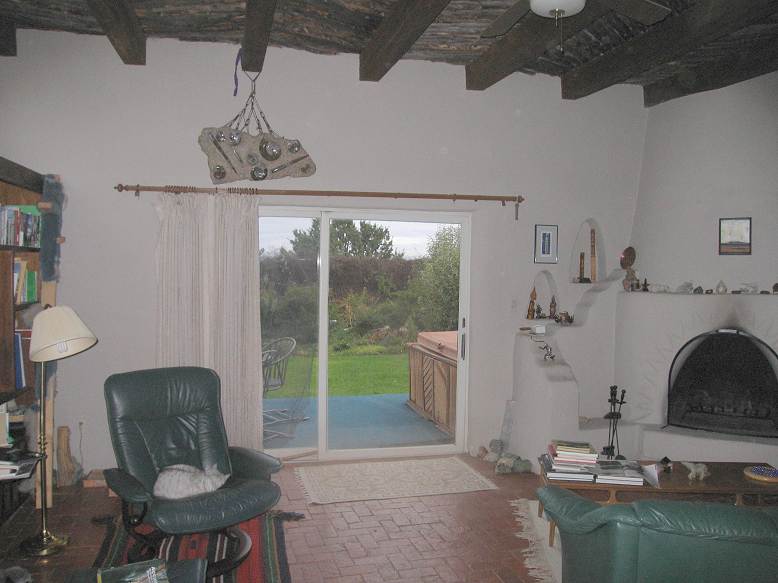