After a couple of days charging up slopes that are 6000 to 9000 feet higher then sea level we decide to switch venues and head to the mountain-bike mecca that is Vernal Utah.

I say this with some degree of irony; Vernal hosts the annual Dinotrax festival put on by the fine bike shop – Altitude Cycle. This event is apparently low-key – attended by about 200 riders and is a blast and a riot. However, its held in high trails in the Uintas as its usually held in late summer. As temperatures are now cooler we have a chance to ride trails closer to town.

Our route took us not on route 40 – the most direct route – but along route 43 through Wyoming – down through Manila and then down 191 past Flaming Gorge. The views are worth it and Flaming Gorge is stupendously scenic.

As you pull into town from the north – you will see signs for Red Fleet State Park. Although there are no showers you can clean yourself off in the reservoir in the cold water – brrr. You will have to go to sleep and wake up to incredible red-rock views. I suppose in peak season the camp-sites might be a little close and not afford much privacy but it was deserted in our time there. The winds are prevailing southerly so keep that in mind when pitching your tent to avoid getting sand-blow in your sleeping bag.

This view of our camp spot shows the “fleet” of the three battleships.

The previous day was taken up by our leisurely drive to Vernal and tracking down trail maps. Morning found us crashing a planned IMBA trail seminar and scooping our local guides Shaun and Melissa from the trail building and maintenance seminar. Wow – were we ever lucky to be camping at Red Fleet it turns out. Not only was the IMBA seminar held there, we also found our local guide and the trail we were to ride there is just down the road from our camp site.

Here’s Sharon and Martin starting out north on route 191 to the trailhead where we are to meet our friendly locals. 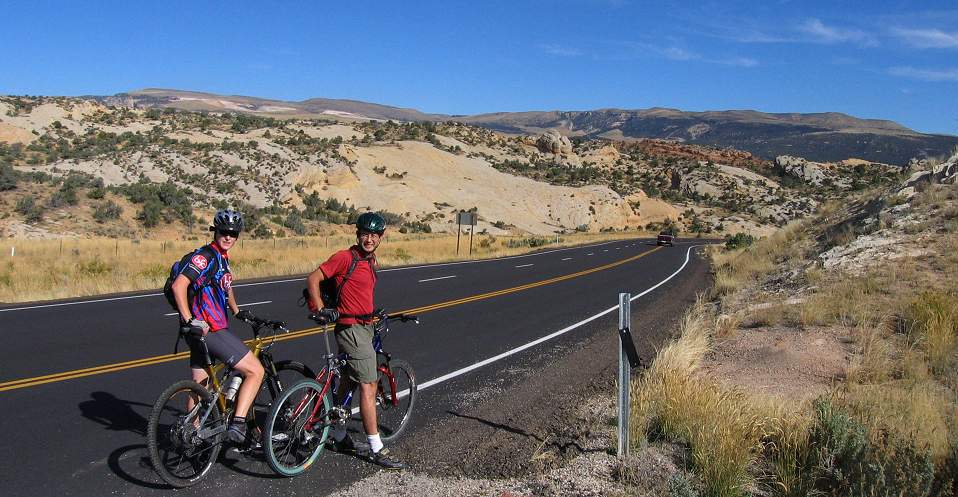 The trailhead for our ride is off the first road north of the Red Fleet entry/exit on the east side of the road. This is the trailhead for The Handsome Cabin Boy trail – named after a Grateful Dead song. These trails are marked on the maps by Rich Etchberger and sold exclusively via Altitude Cycles.

Just because the trailhead might be mapped does not mean that the trail is easy to find. Very few people ride here compared to many other hotbeds of biking. We quickly find that Vernal singletrack means singletrack – as Shaun leads us out.. 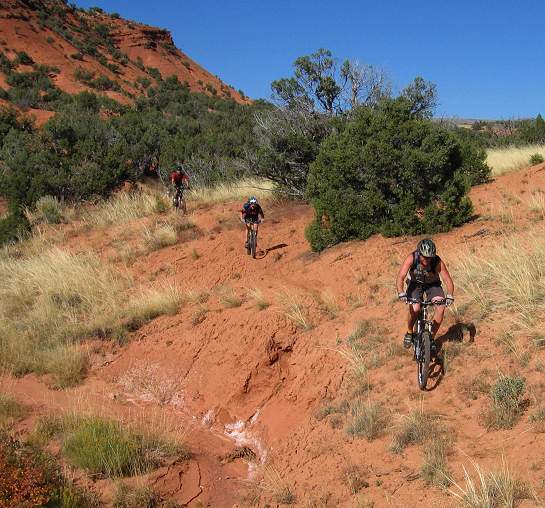 It seems that Vernal singletrack builders leave cactus strategically placed at corners. Anyone cutting switchbacks, blazing new lines or sloppy bike handlers are immediately punished. Since Audrey and Brian are neither of these things they have no problem making their way to the slickrock section in the background of this picture. 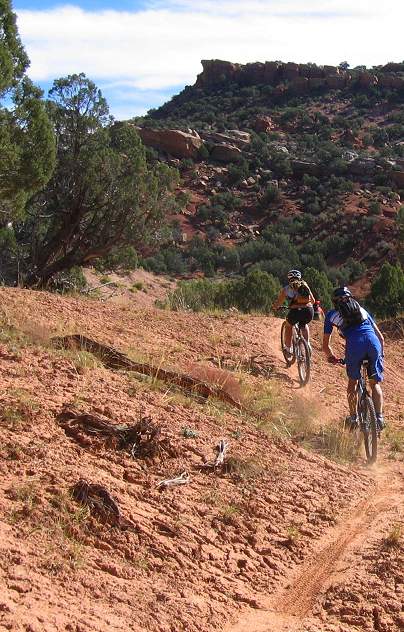 The slickrock climb is steep! Its also marked by cairns and the “trail” utilizes lots of tight turns; a mindless grind it is not. I’ve got the advantage of following Shaun’s line up the grind. Sharon has to figure her own route up the slickrock. In the background, to the south, are the mesas of Red Fleet State Park. 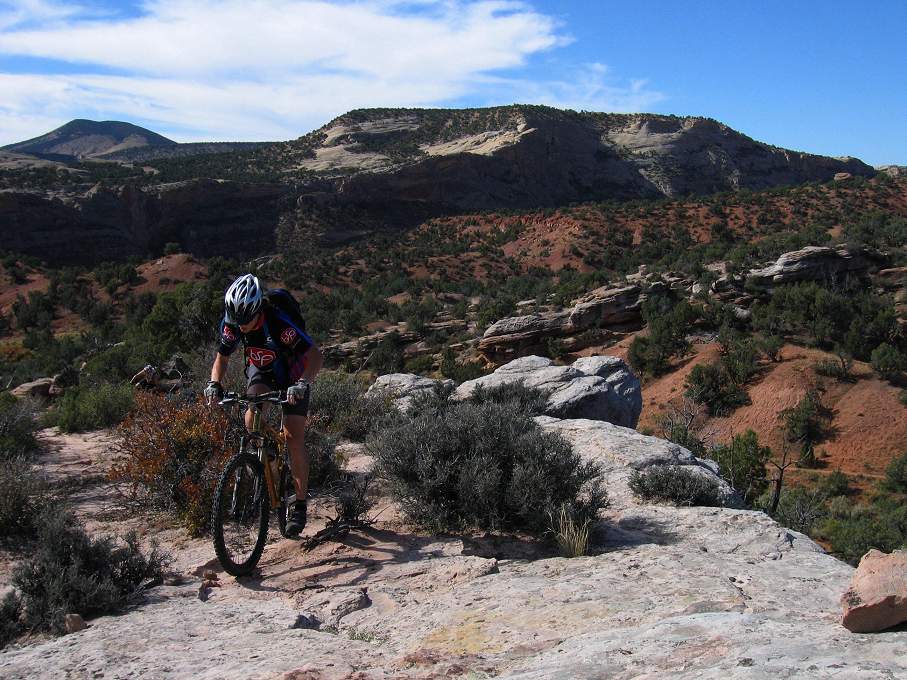 Cabin Boy doesn’t have extended grinding climbs or long downhills. That would be somewhat too relaxing. Instead it has an unyielding pace of technical uphills interspersed with downhills. This is not riding for the lazy. Here Shaun shows us how to climb a Specialized Enduro as he cleans the Cabin Boy climb. 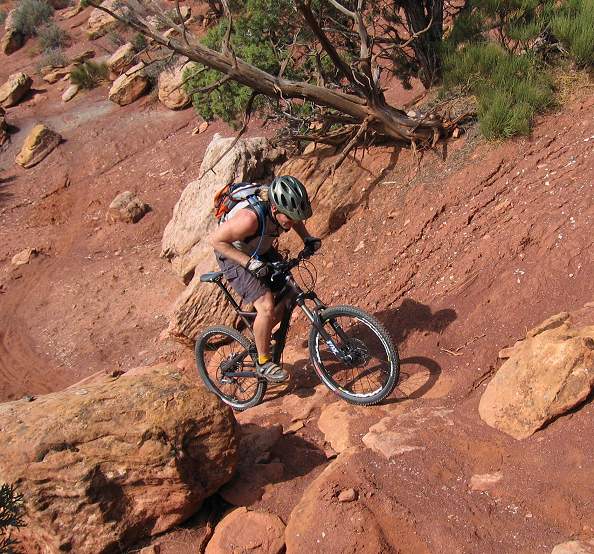 This panorama shows the view from the rock buttes of the Cabin Boy Climb looking east and south. You can see for a long way in Vernal. On picture right, Brian starts another attempt at the Cabin Boy climb. For the record, he made it.

Martin gives the climb a few goes. He did not make it but his efforts were valiant and swearing was minimal 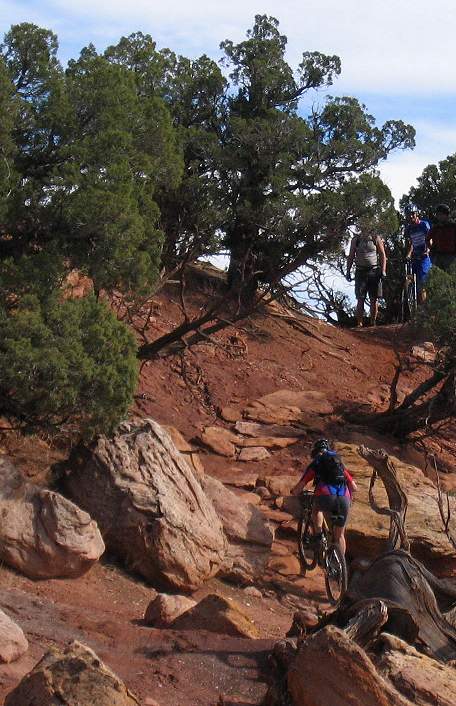 Melissa leads Audrey down some ridgeline singletrack off the first part of Cabin Boy then across the road to the second part. 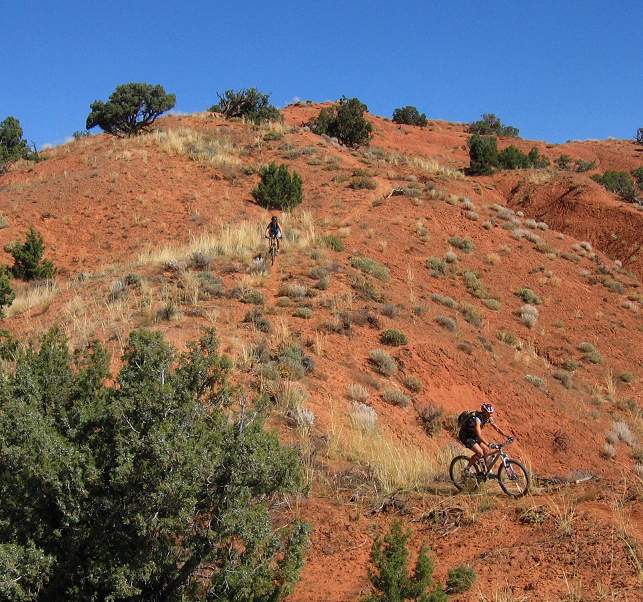 Cabin Boy then links up to Three Amigos. If Cabin Boy’s line was obscure, Three Amigos is downright undefined. It takes a careful eye to follow the trail here. There are some parts where only the three locals who found the route have ridden.

The soil of Three Amigos is not quite the same glory of the red sandstone of Cabin Boy but the singletrack, if it seems possible, is even narrower. 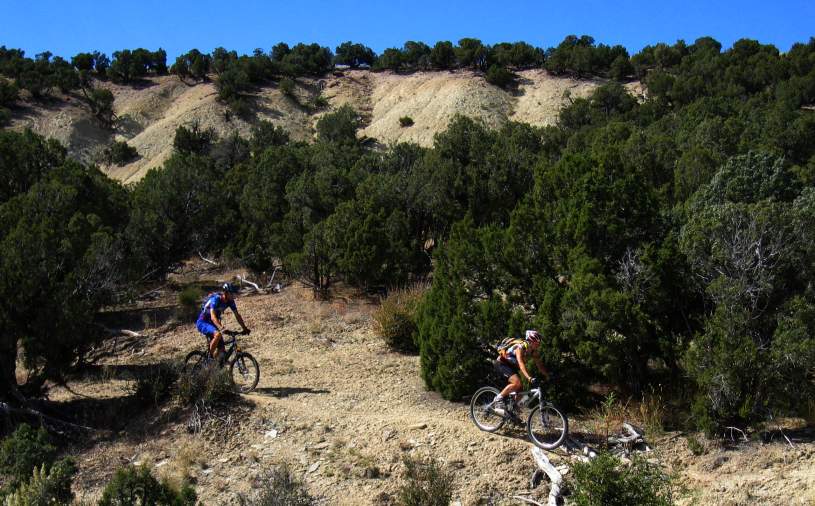 Here is a cool steep switchbacked section of the trail where Shaun dips in and out of trees; then charges up a climb to finish the move. 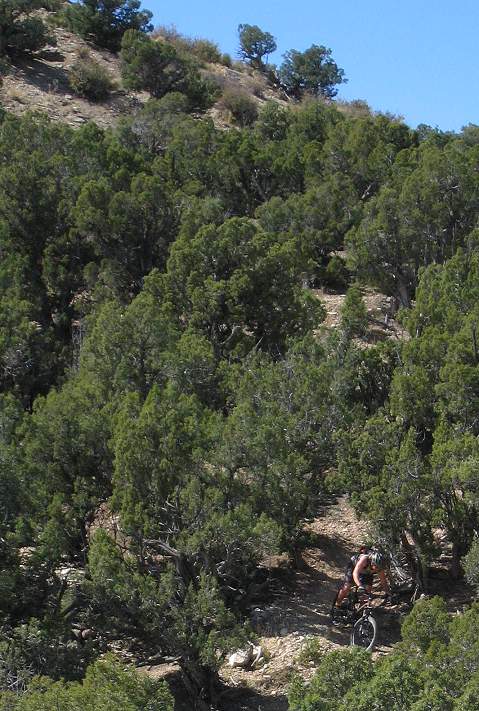 Martin, Brian and Sharon – from top to bottom – dip into the steep section 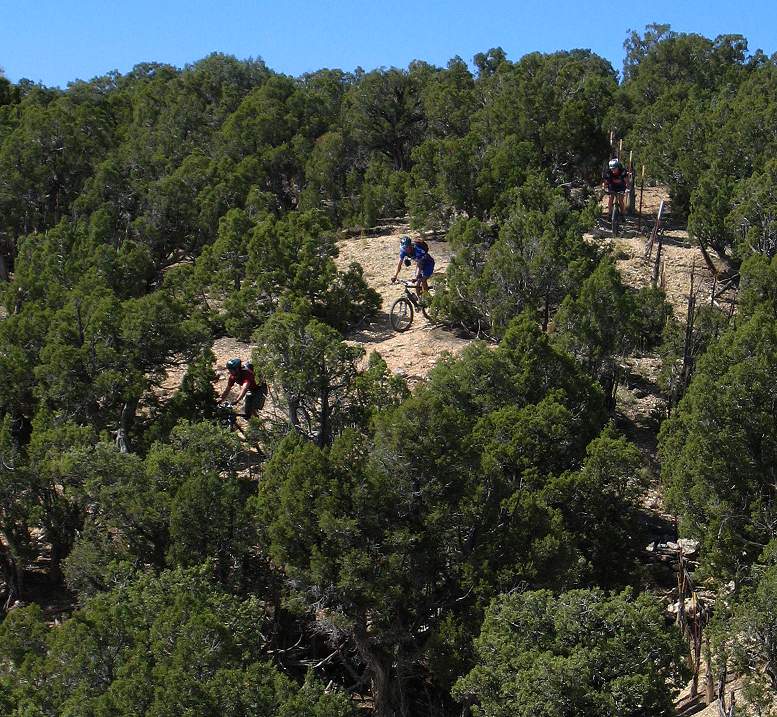 Shaun completes the final sharp uphill move deeking around a barbed wire fence and an overhanging tree branch while simultaneously doing a limbo with a triple twist. 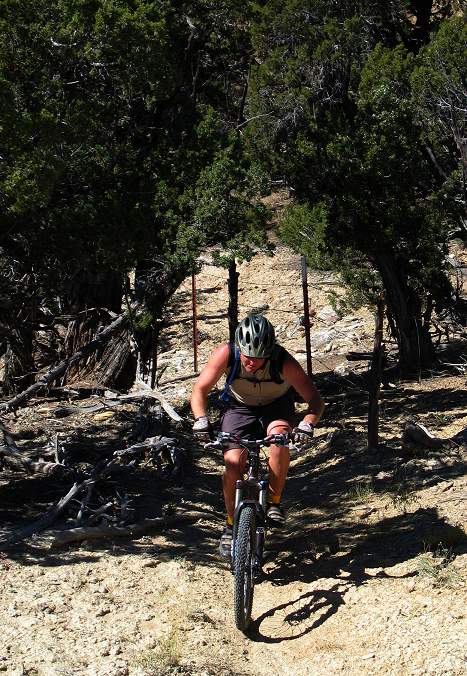 Here’s one of the few sustained fast sections of non-technical trail just before Three Amigos joins with Jazz Cro Molly. Sharon leads out Melissa and Martin 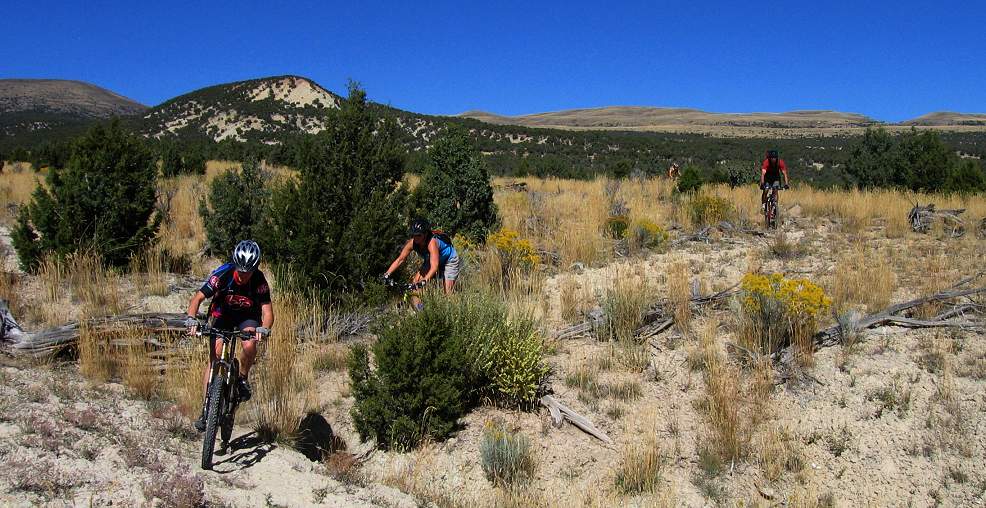 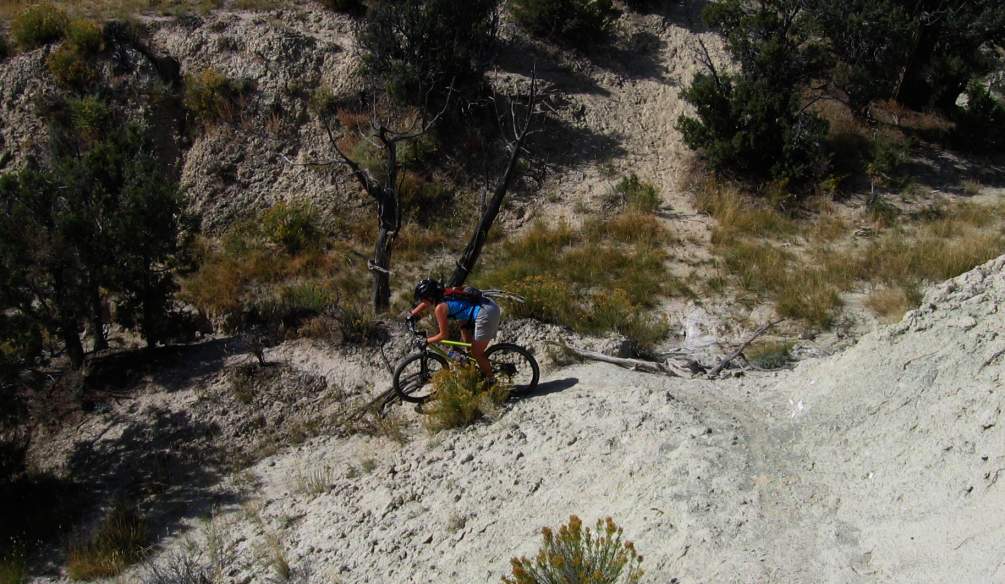 Melissa tailing me down singletrack. I’m not feeling the love of smooth riding today so hope I didn’t kick too many rocks up into her. 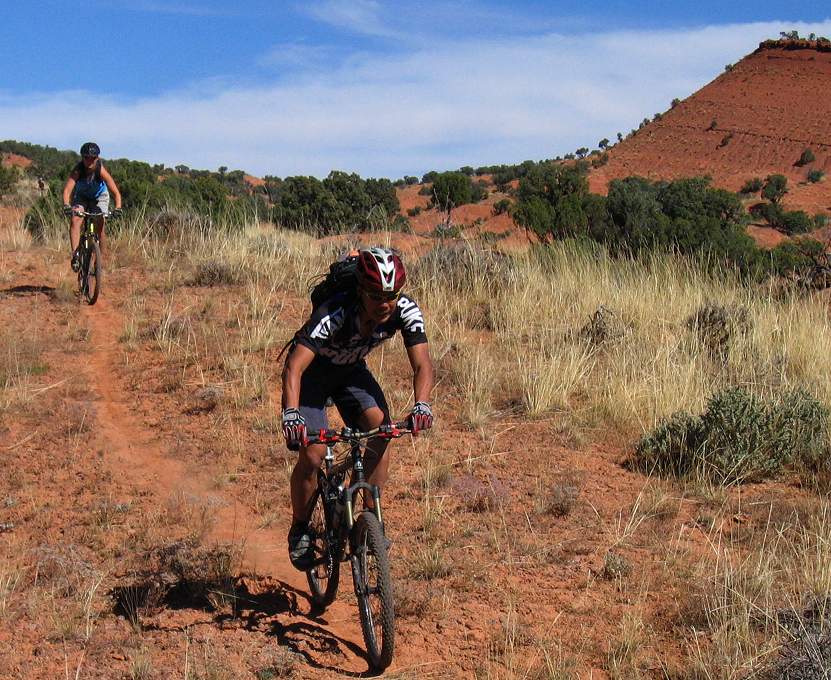 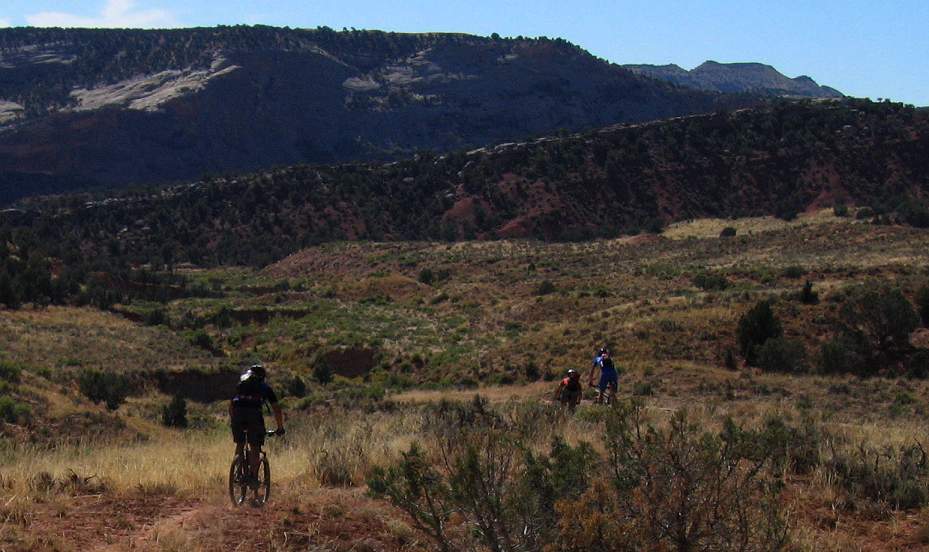 I didn’t get any pictures of Jazz Cro Molly but there we stopped and assuaged our guilt by helping out with the IMBA trail crew as they built a new section of trail rerouting a steepish gully. I was really stoked to see Troy – the owner of Altitude Cycles – out there helping out. Its a good vibe in Vernal and a good crew of people. We ended the day with 21.3km of riding over “only” 756m of tough uphill; every metre it felt like we went a round of boxing to fight for..

This entry was posted in 2005, bike and tagged Utah, utah2005, Vernal. Bookmark the permalink.