It doesn’t look so good this morning as there is rain so we get a late start. However, the temps are cooler and there does appear to be hints of clearing patches so off we go to look for some higher elevations in the Little Sister area. For some inexplicable reason half the group decides to turn back before we even get to the saddle separating Big Sister and Little Sister. Just 10 minutes or so after the group turns back, the clouds begin to break and give us some views of our objective. 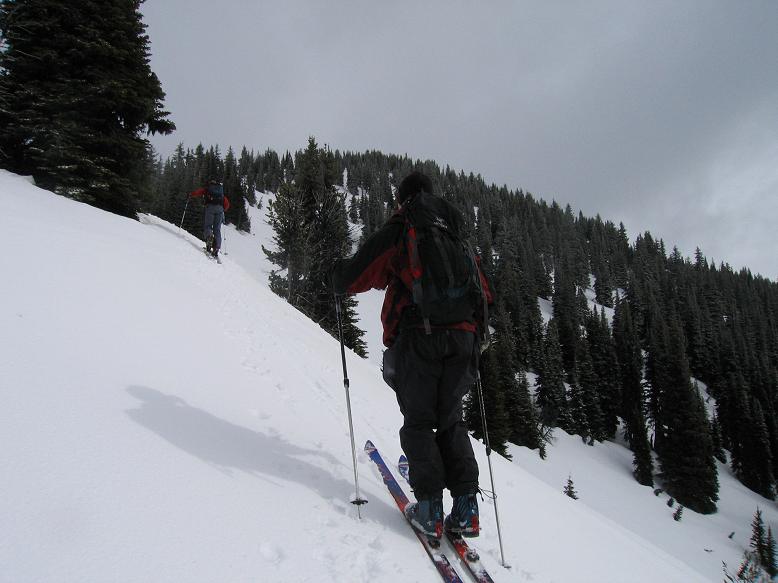 By the time we get to the ridgeline leading to Little Sister at 2030m 0457935 5549703 the weather is clearly turning for the better. The rain falling at lodge elevation turns out to be a dusting of new snow. This view looks east to the peak of Little Sister

This view looks west towards Big Sister (2467m 8093ft) which unfortunately we never did summit. Rugged Peak is the background. Note the slide activity on the north east steep slopes of Big Sister under the rock bands. The activity is recent.

This is what I call the “False Peak” for conveniance at 2255m 0458727 5549760. After a quick pit is dug, the north facing slopes (to the right lower of this picture) are pronounced skiable. Here is Bill testing slope integrity. 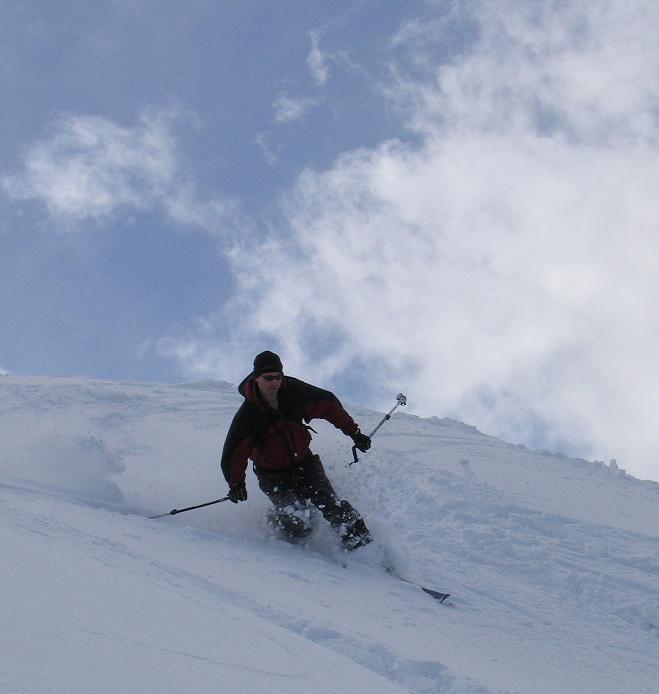 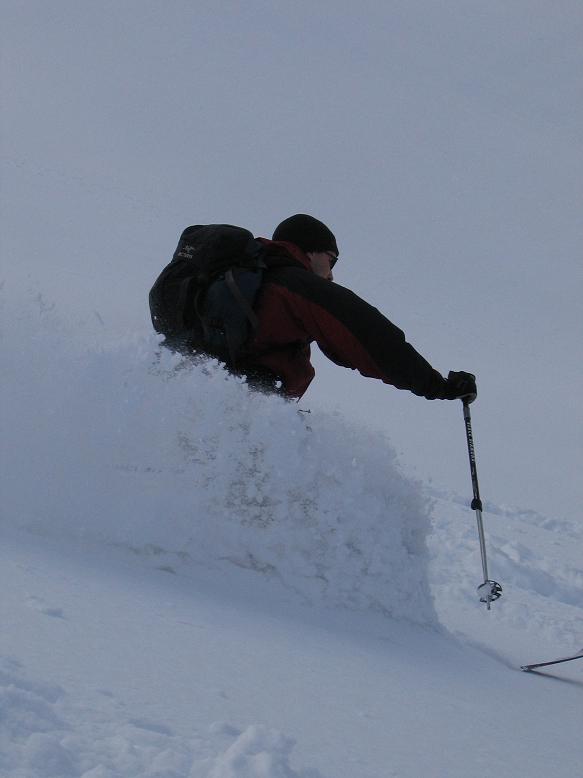 Sharon with Rugged Peak as the backdrop 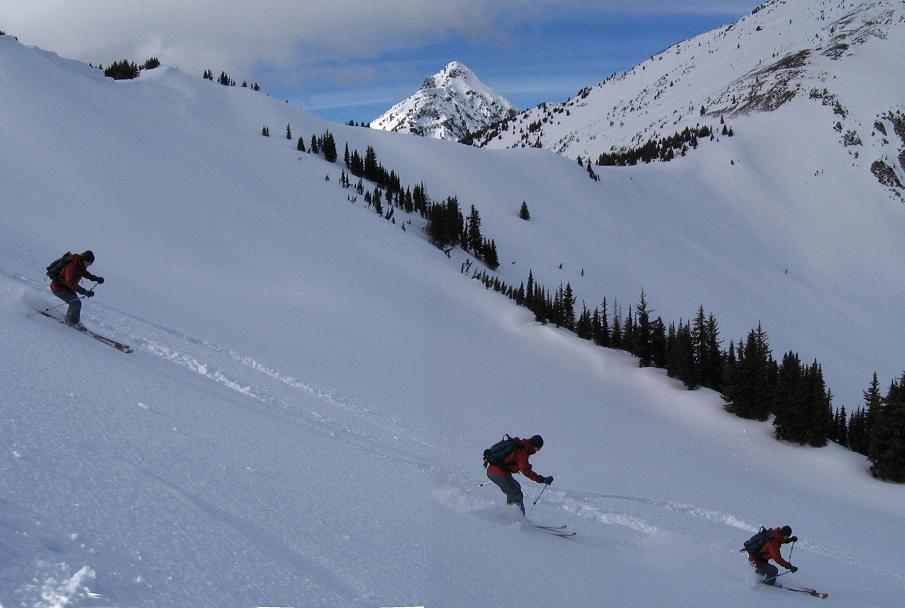 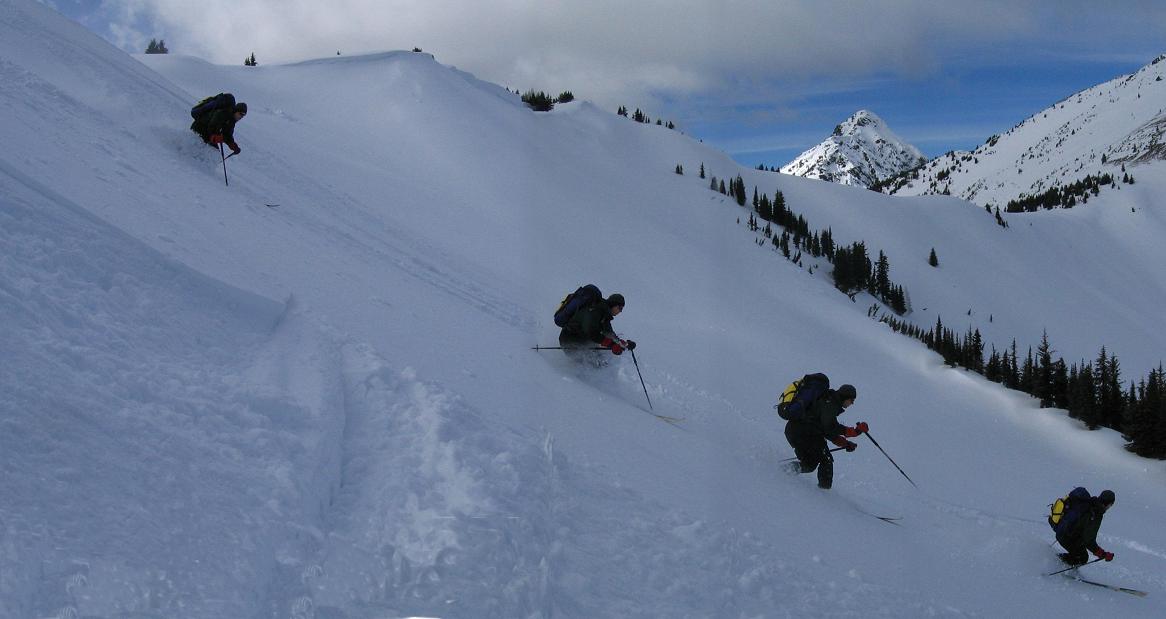 I take a turn 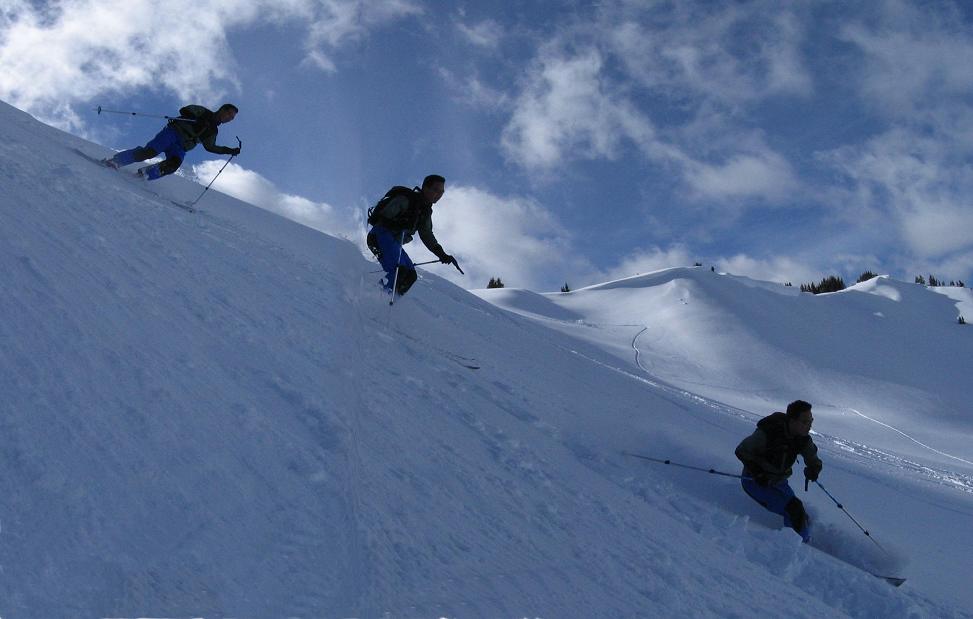 Colin on the same run. We only ski the top 200m. There is potential to at least double the elevation to the bottom of Grizzly Meadows but we figure the snow won’t be as good lower and the bottom is a terrain trap that’s exposed to the slidepaths of the NE face of Big Sister. 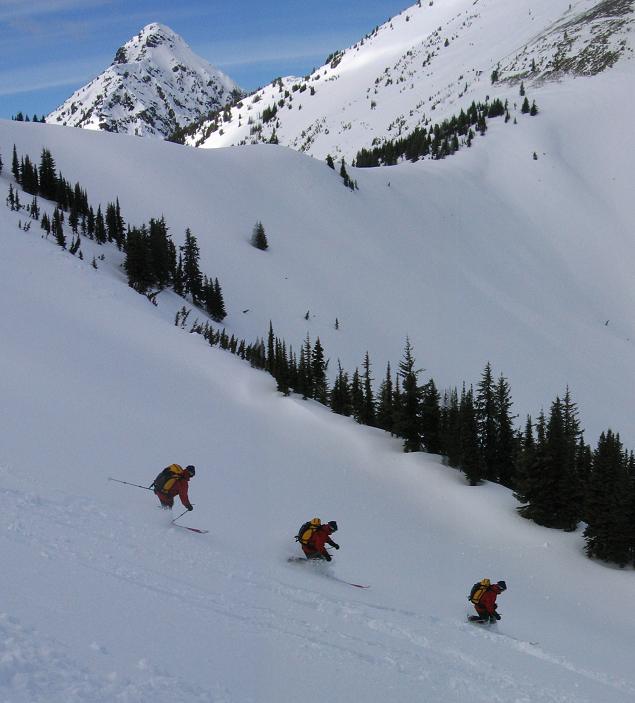 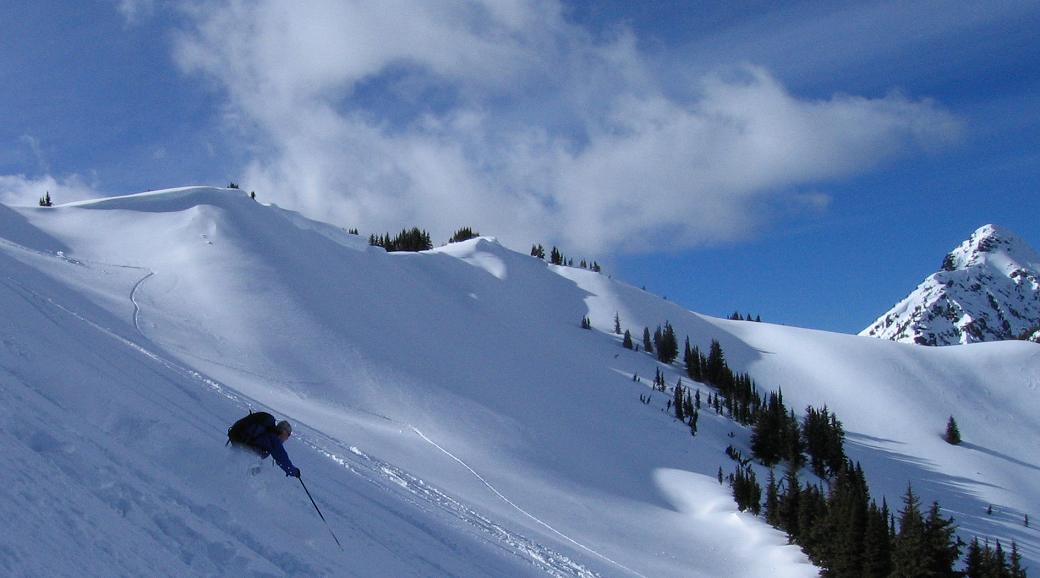 After that very satisfying series of runs off we go to Little Sister Peak proper. This is at 2277m 0459039 5549484. This view is to the south looking across to Kokanee Glacier Provincial Park and Slocan Lake.

By now the sun is starting to warm us nicely but the nice dusting of snow makes for nice skiing on the south slopes off Little Sister. We test a short 200m slope. Here is Colin.

Following a couple of runs, we return to the peak for the obligatory group shot. Enjoying the sun rom L to R: Mal, Bill, Sharon, Colin, Andrew, Lee 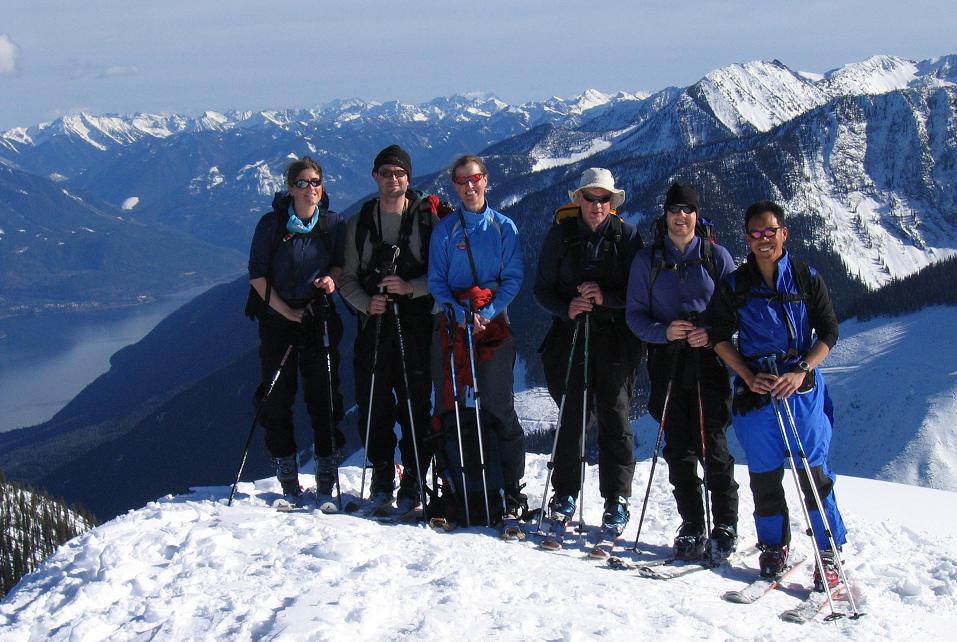 Our last run takes us down Big Mama – down the creek line separating Little and Big Sister. Rupert leads the way. 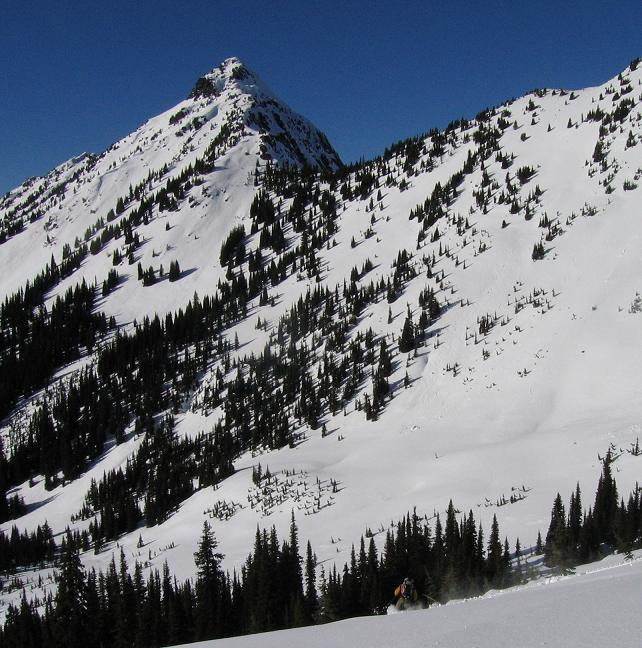 Andrew with Rugged Peak as the backdrop 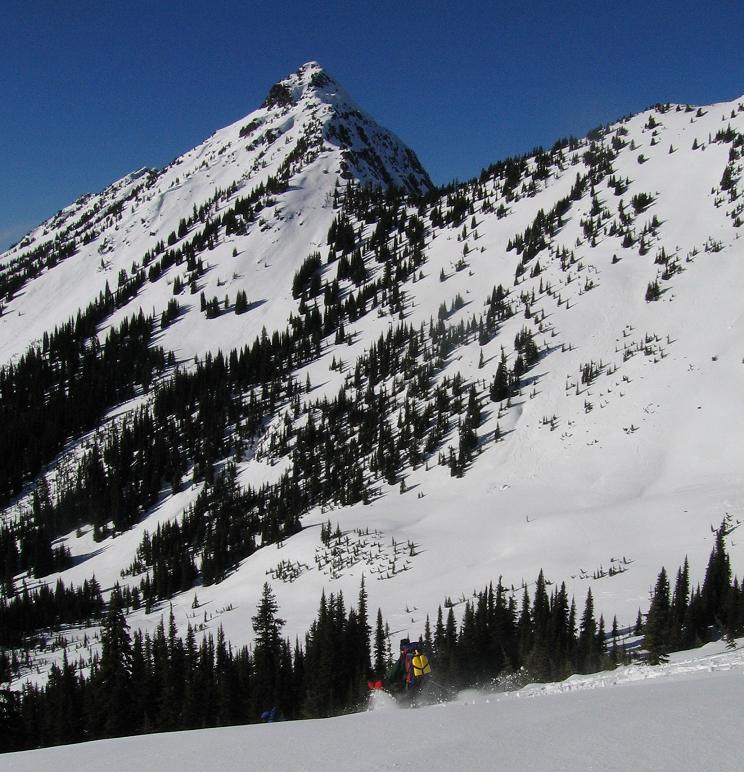 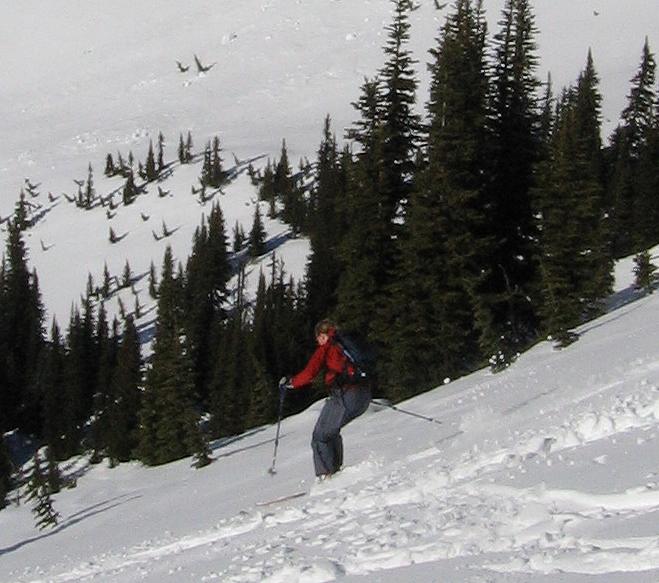 We finish this short but quality day with 940m.