Next days weather isn’t quite the bluebird conditions we’ve been hoping for spring corn to form. Jonny, the assistant guide, joins us for this rather overcast day. This time we’re touring out to an area south of the cabin towards Shannon Lake and a ridge line marked by a peak known as the Pyramid. 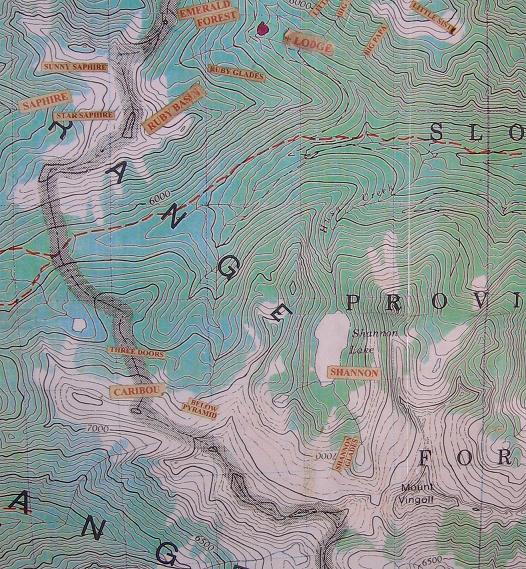 We start by skiing down the access road to a road signed as “Shannon Creek” at 0458249 5547771. Then from the access road skin up the south side of the creek towards an area known as Three Doors that appears to be a favorite poach for snowmobilers. Watch for exposed slide paths from some terrain above and to east as you approach Three Doors which is at 1907 m 0456415 5545826. Three Doors is an open bowl with three steep entrances into said bowl. Then you gain bowls south of the ridge line Below Pyramid. Prevailing winds are south-westerly and the cornices off the ridge are easy to spot and avoid. There are some chutes off this ridge that apparently have never been skied that look very interesting and doable in the right conditions. When we were there snow levels were too shallow for a ridgetop traverse from Caribou to One Goat Pass just west of Vingold but I suppose that could also be considered with more snow and some stability.

Below Pyramid is 2226 0456154 5545826; we had to traverse the open bowl to gain open slopes above Shannon Lake. Unfortunately high winds were scouring most of the remaining snow on what skiable terrain there was. Here we are approaching the ridgeline Below Pyramid. 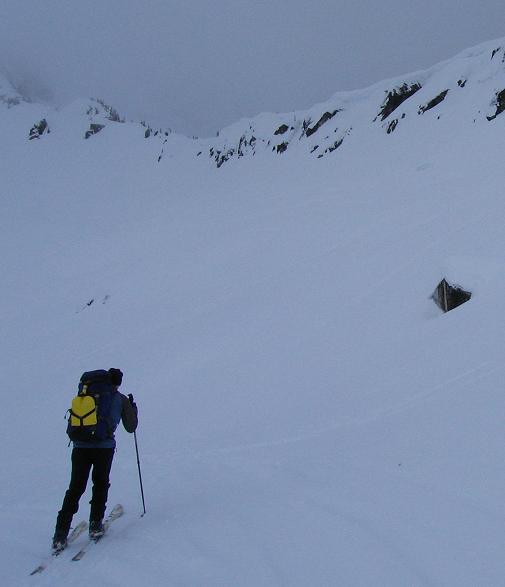 John on the traverse to the slopes above Shannon Lake. Views are to North East. This is at about 2172m 0458206 5544325. From this point its possible to ski what I call Shannon Glades down to the lake but there’s quite the crust on this wind-hammered slope so we decide to skip the faceplant session and continue traversing. 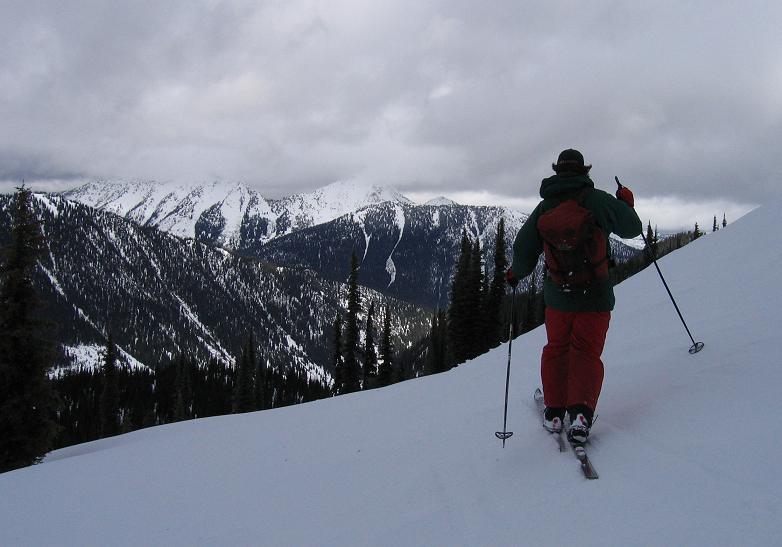 This traverse takes you down past a rock band. Watch for this rock band as its entirely possible to do some inadvertent cliff jumping if there is poor visibility. Justin manages to make the turn. 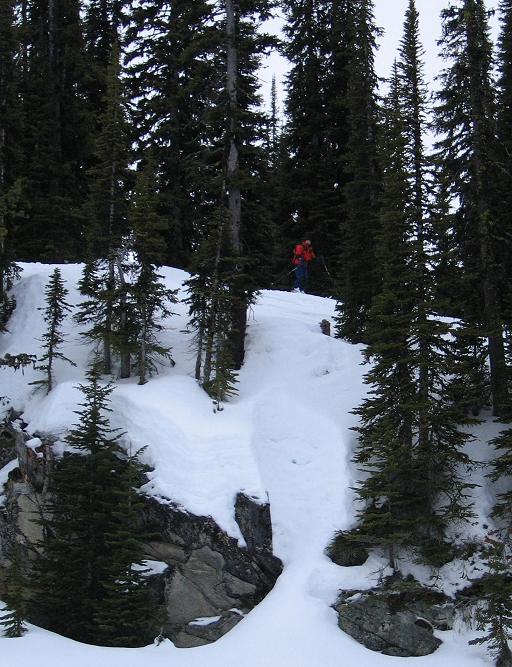 Fortunately we do manage to find the one skiable slope in this area. Here’s Mal 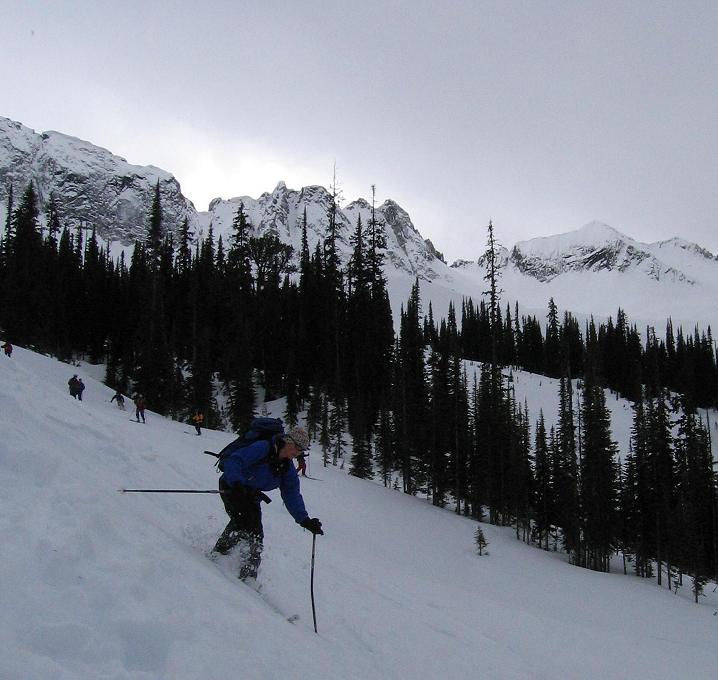 and Rene also hitting the downhill. 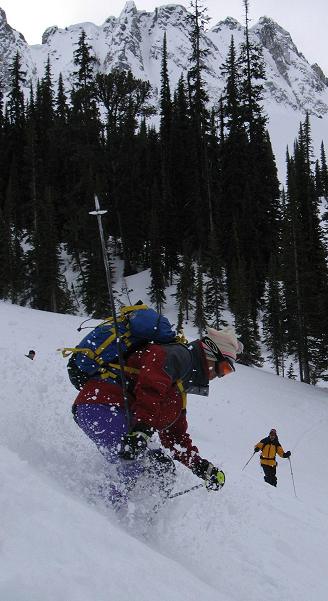 Then we are above Shannon Lake. This picture of Dale (owner-operator of VMT) and Jonny shows slopes of the west arm of Mt Vingolf (2584m) in the background. 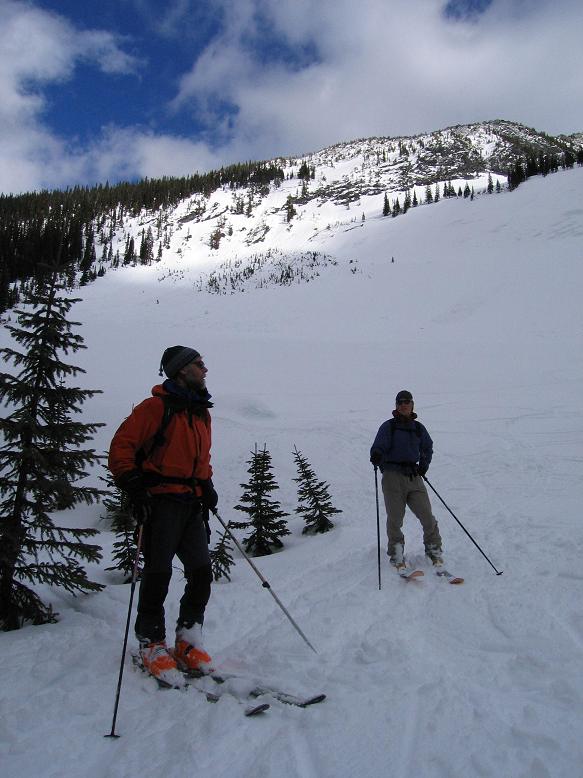 Shannon Lake with Mt Vingolf in the background. Too bad there is neither time nor visibility for a summit attempt. Apparently its a gorgeous summer hike.