Whistler – Kill Me Thrill Me

After our rides in Pemberton on Tower of Powerand CreamPuff we take a well-deserved day off to ride in Whistler. First we have to ditch Trevor – who is fixing his poor busted bike – and ride Trainwreck.

Here I am posing on the Trainwreck gaps. Yes its an actual train car from a cargo train that wrecked in the woods just south of Function Junction. Someone’s made some real budget looking jumps and trannies off the train. 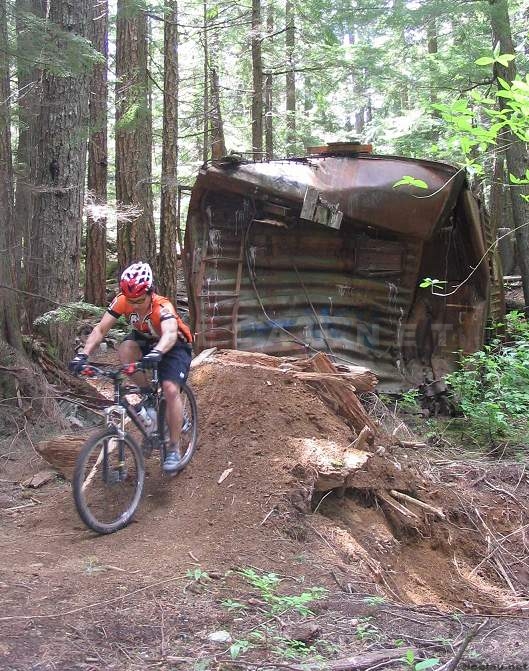 and the ground level skinny 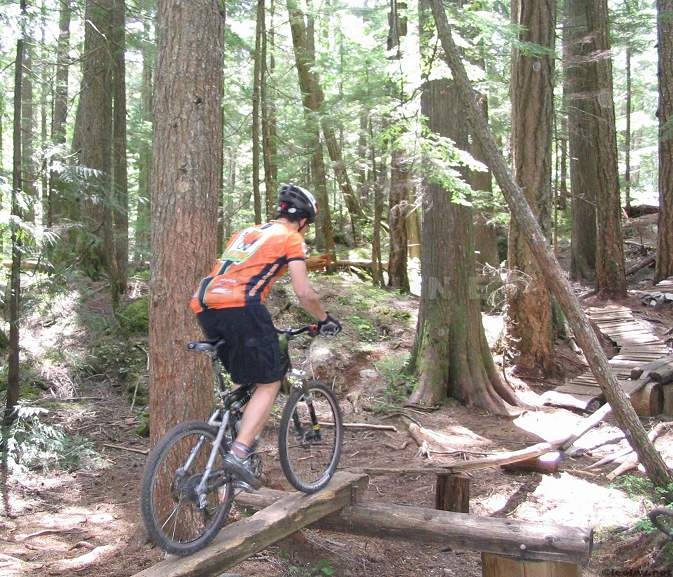 Then after our first spin of the day we’re off to the bike shop to pick up Trevor’s bike and then to Kill Me Thrill Me. This is a pretty little xc trail that winds its way in and out of the woods from shade to sun. Its got interesting little climbs and fast tight descents and deserves its reputation as one of Whistler’s classic trails. Here’s Pete and Tyler checking their heart-rates. 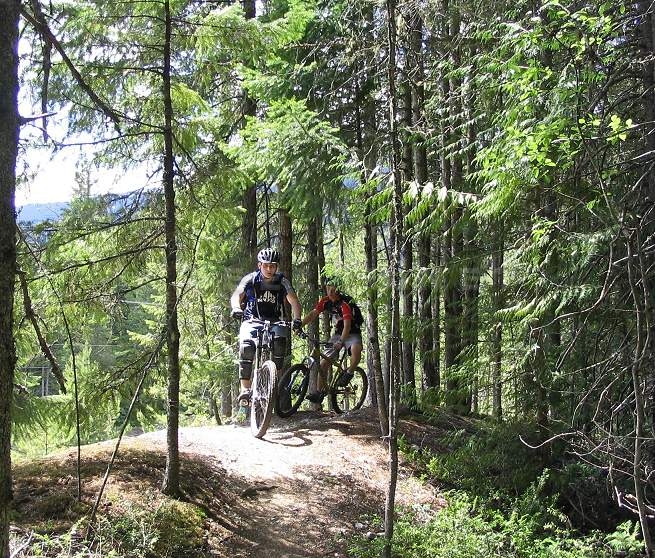 Nigel on a berm on one of the aforementioned neat descents. I’ll note that Nigel did this entire ride on a .243 hardtail that was probably twice as heavy as our bikes, on flats, yet cleaned a lot of the uphills. 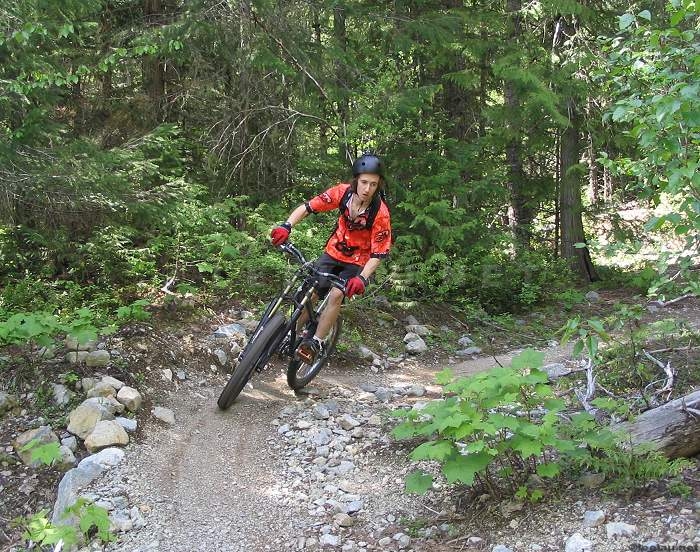 Tyler coming out into the sun. The weather forecast lied! 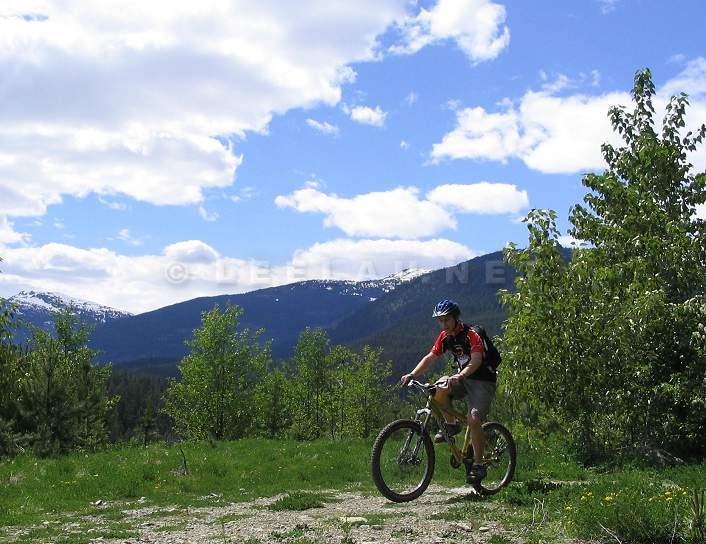 Group shot with Mt Wedge and Blackcomb in the background. 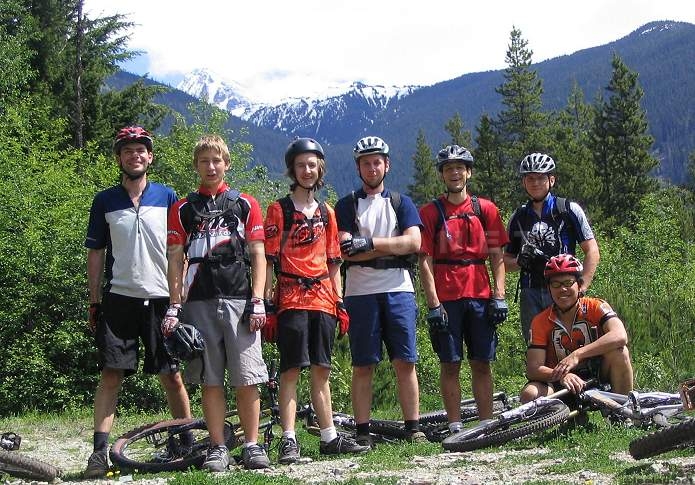 Tyler again on the tight singletrack. When I say tight, I mean you have to work your handlebars to fit through the trees. 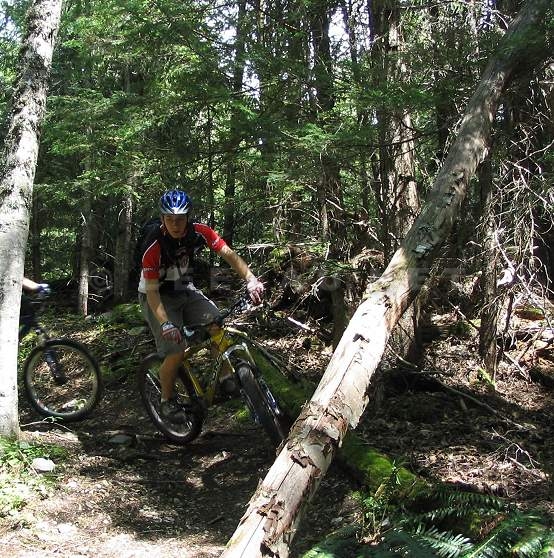 Nigel almost making a tough uphill section. All of us tried but failed to get traction on this loose rock. Nigel made it the furthest. Remember this boy is on flats and on the heaviest bike! However, that is outweighed by the fact that he’s anorexic. 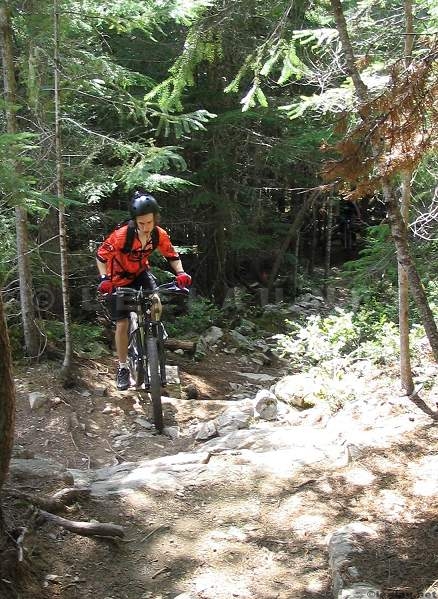 One thing that Whistler and Pemberton have is lots of granite. Another thing that they have are trail builders with an eye for granite veins on which to ride – something we don’t have in North Van. Here’s Tyler on the rocks. 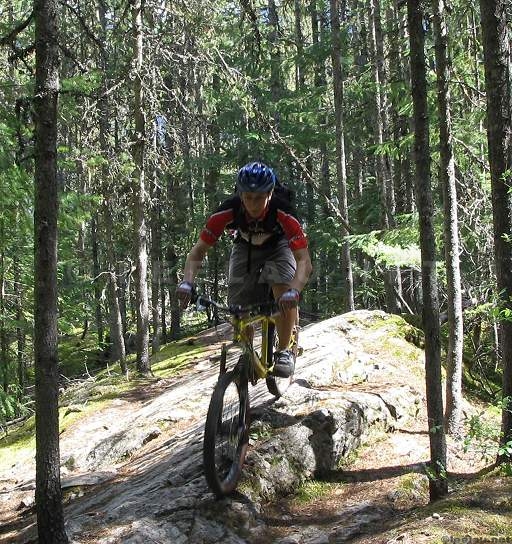 Nigel riding past an old abandoned dryer that marks roughly the halfway point on the trail. 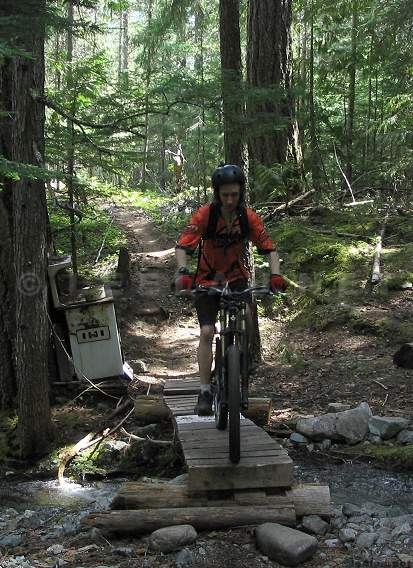 Chris lunging up a granite section. 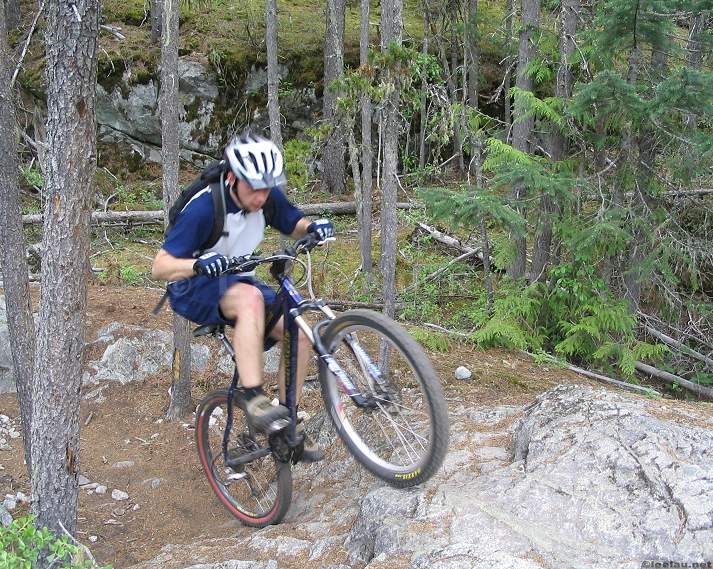 and then completing the next move down the first of a series of rock faces. 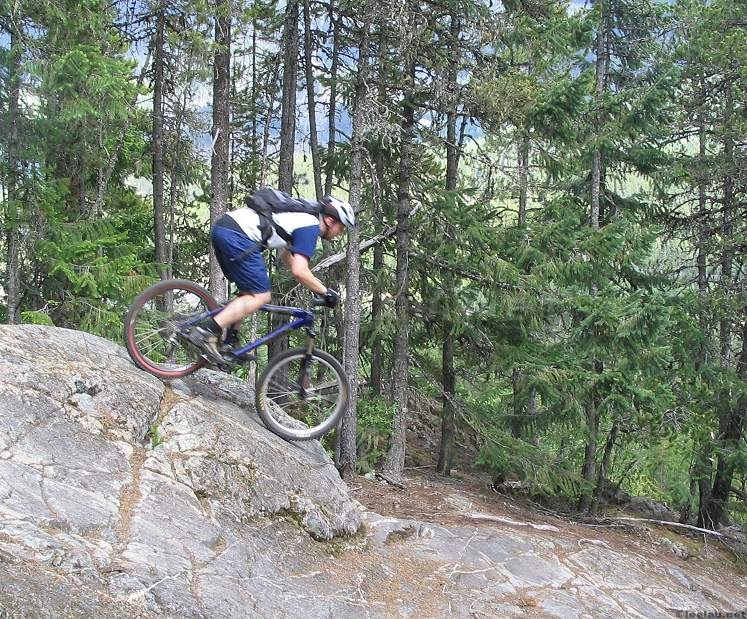 Then we get to a rock line where we stop to play for a bit. 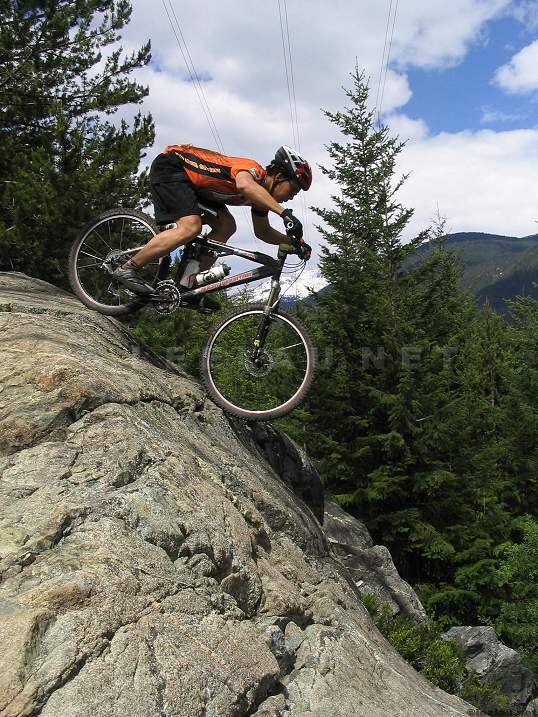 Sean takes a turn on the rock 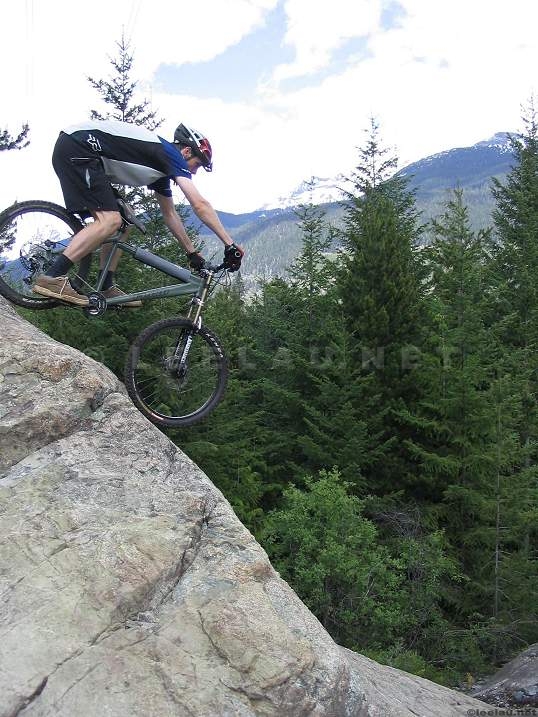 as does Trevor. The powerlines add to the ambience in a weird post-industrial kinda way. 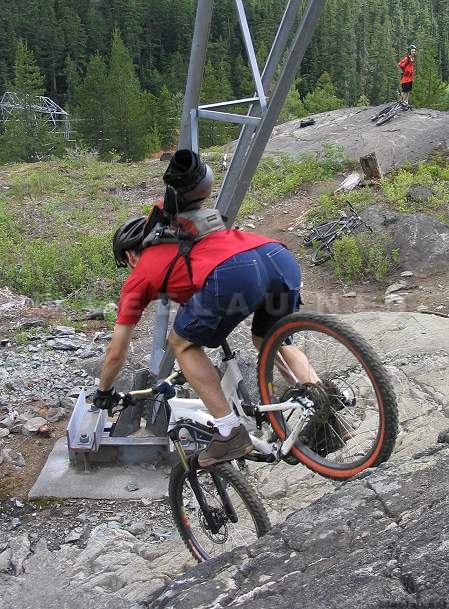 Pete flats! For the first time! So we have a chance to do this rock face again. Here goes Sean 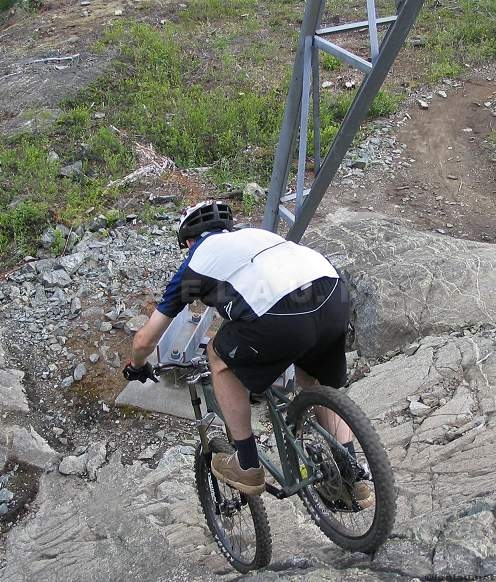 and then Chris takes a turn to go anti-gravity 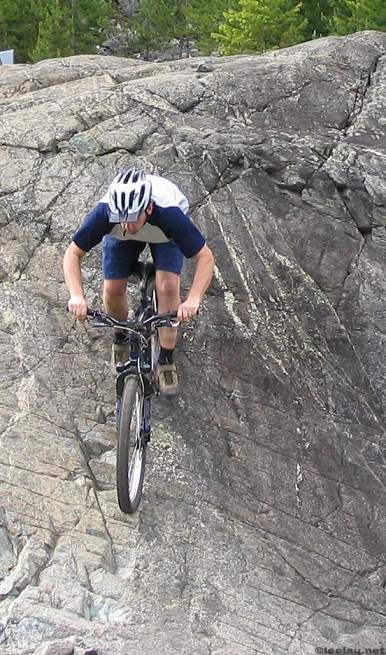 Pete fixes his flat and I get a chance to set up a nice artsy shot. 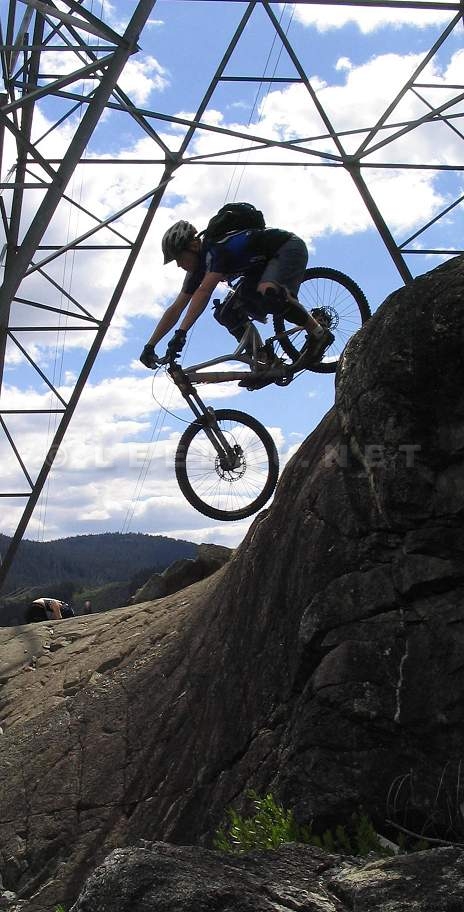 Pete then points out that this rock face is also a wall ride. Pete calls it, he gets to ride it first. 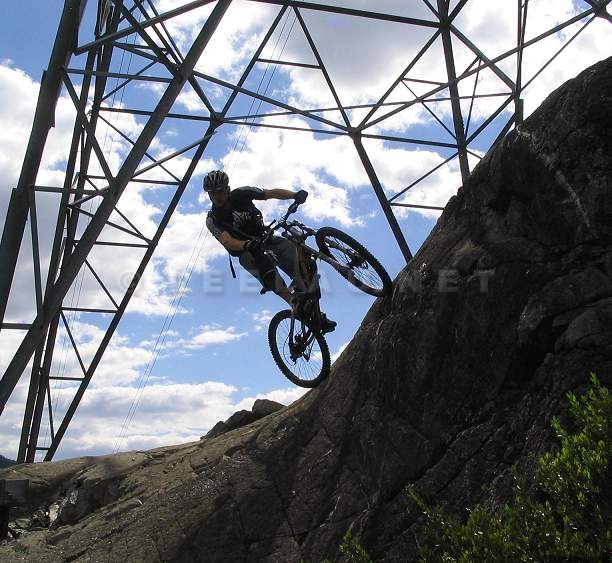 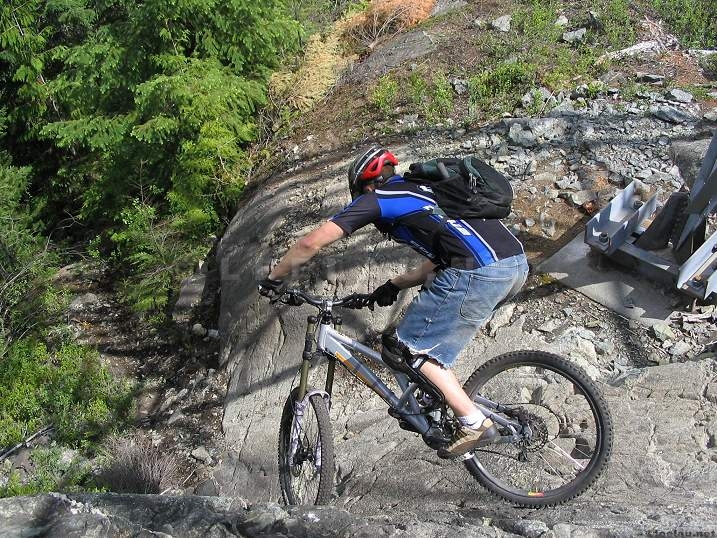 Here’s Tyler’s wall-ride from another view. 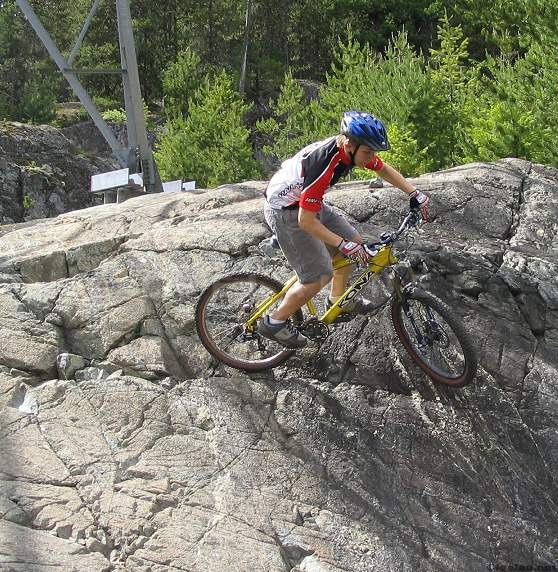 Turns out that the rimstrip is not on correctly and a spoke is puncturing the tube. 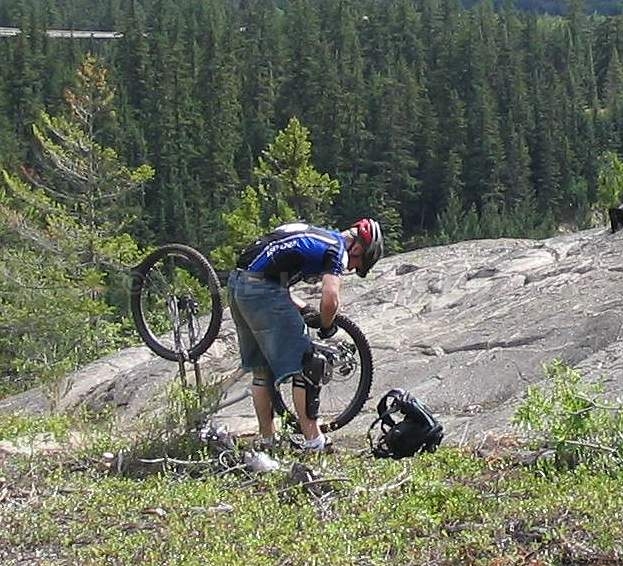 Then Pete flats again! The fifth time- but this time he tears the valve off a presta tube. Bye bye Pete – guess you’re walking. About an hour of wall and rock-riding has now gone by so we leave Pete with tools and one more tube and finish off Kill Me Thrill Me. Some of us then continue to Comfortably Numb and its Young Lust variation while Nigel and Chris – both of whom are thoroughly exhausted – go back to the cars.

With just 4 people in the group now hammering their heads off the technical little climbs and one big climb in Numb goes by quickly and we’re quickly at the ridgeline climb. Rainbow Mountain is in the background. 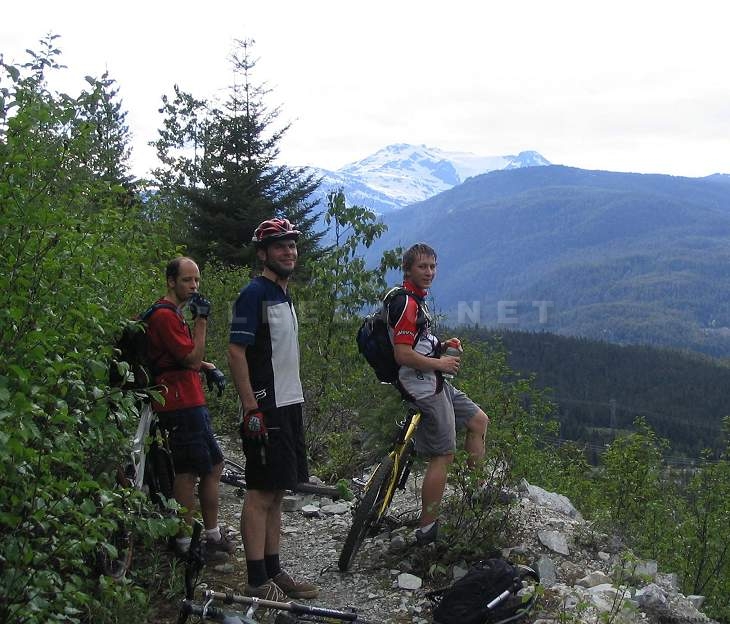 Then we’re on to the Wedge Creek bridge before booting down the cherry singletrack back to Wedge Creek. 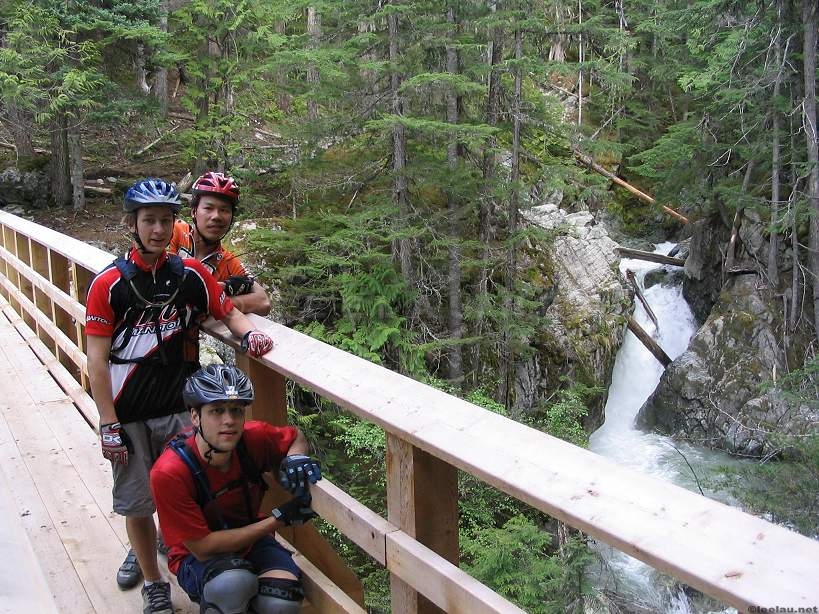 This entry was posted in 2004, bike and tagged kill me thril me, kmtm, whistler mountain biking. Bookmark the permalink.