It’s now snowed a grand total of 10 cms new over the past couple of days in Whistler. Not too impressive but yesterday’s skiingwas pretty good on lee slopes. Today we had a late start as the village gondola had broken down. Paul and I were already up skiing but our other partner in backcountry – touring was making her way over to Creekside.

There was still lots of nice snow on Boundary Bowl; not bottomless but not dust on crust either. 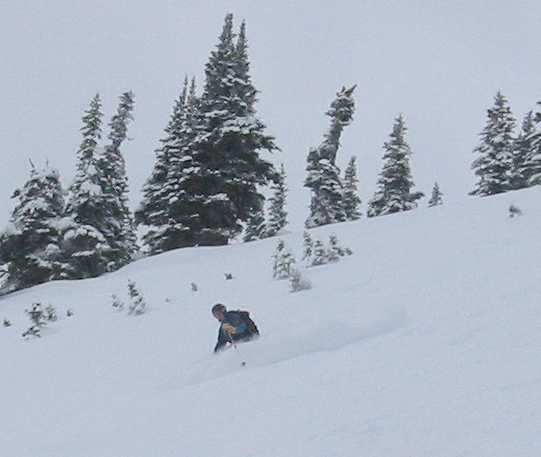 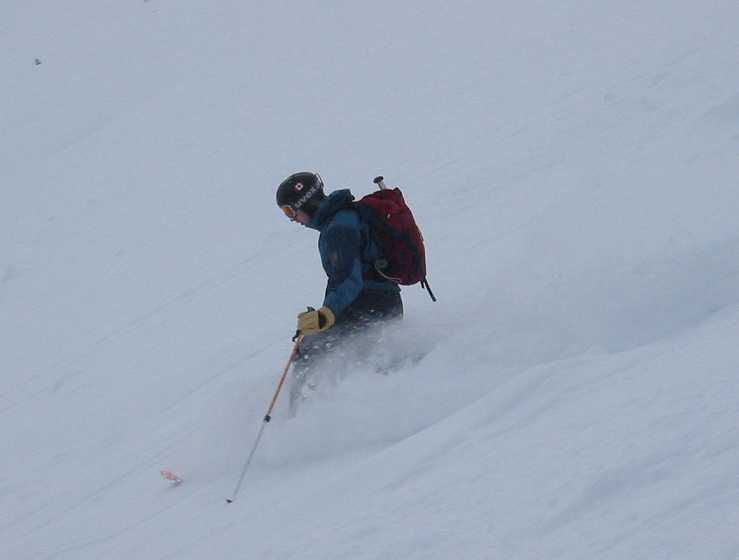 Flute’s always a good backcountry-standby when you don’t have a lot of time. The sun breaks out just as Emma and Paul get to the section where we skin up. In the background is Harmony Bowl and from L to R – south chutes of Sun Bowl and then Harveys and Robertsons. 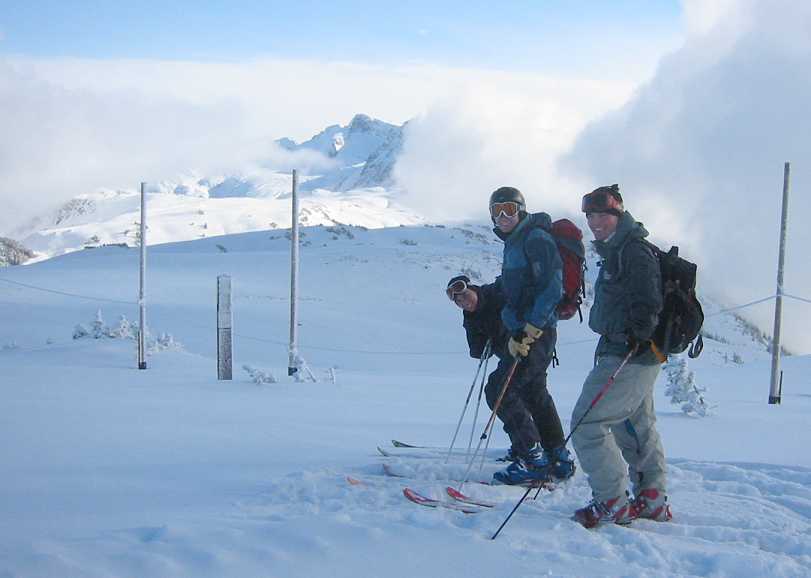 Artsy shot of Emma skiing the lower-angle higher slopes of Flute Shoulder before we contour over to the steeper chutes overhanging the top of Lesser Flute’s backside. 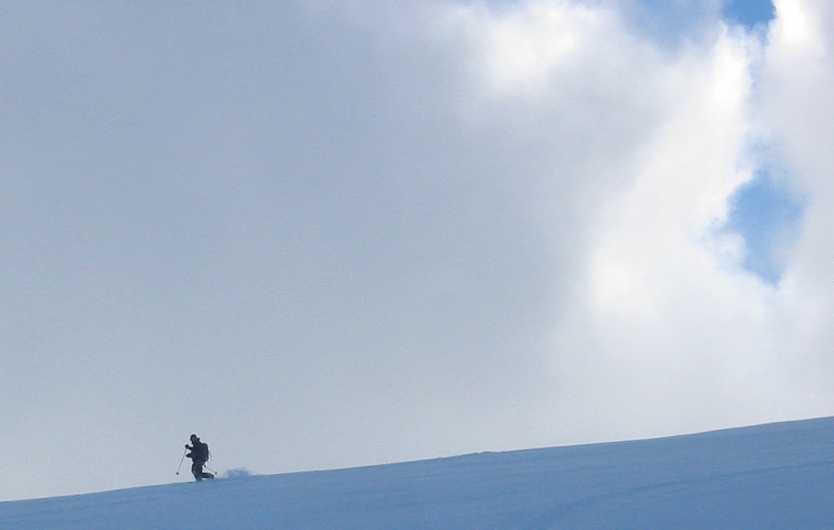 While Paul and I stop to look at steeper section of Flute Shoulder closer to the ridge line, Gavin and Emma drop into Flute Shoulder heading down to Oboe Creek. This section of slope is cross-loaded; with the wind swirling in from Fitzsimmons Creek. Usually prevailing winds around Whistler are south west to south east – hence the big cornices overhanging Pig’s Fancy dropping into Flute Bowl. This localized wind on Flute Shoulder from the creek can transport a lot of snow; there’s been naturals at the top of Flute Shoulder. 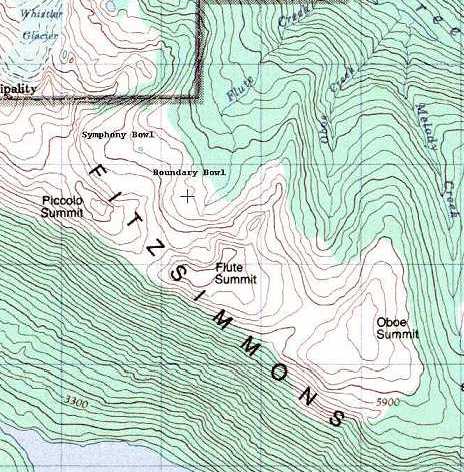 Today however, the pack is about as bomber as bomber can be. Our pit – about 10m down from the ridgeline hits ground at about 50 cms and had no meaningful results on a compression test. At our skintrack about 20m from ridgeline the pack is more like 90cms.

Just to give you more idea about how localized the wind -effect was – Gavin’s and Emma’s line was definitely more wind-affected and they had dust on crust. Our line had one small rib collecting snow and we had knee deep turns all the way down. 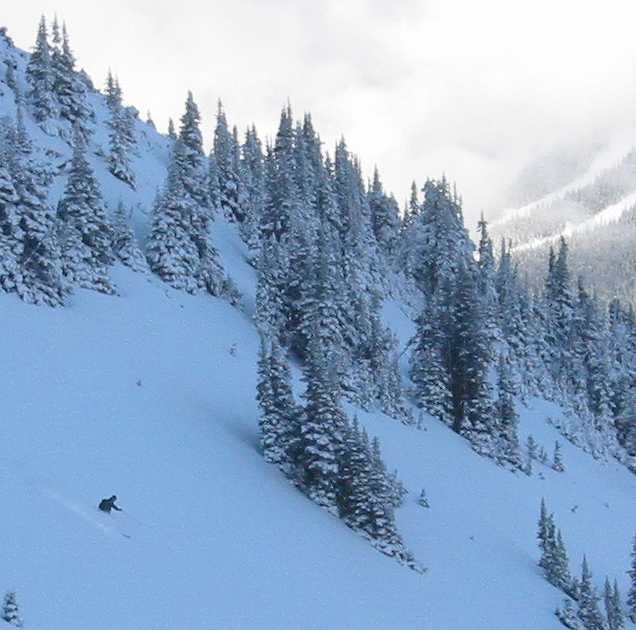 Gavin splits off on his own after this one run and we take another run – this time down skiers right of Flute Shoulder to Oboe Creek. This is the money run with the lightest most consistent snow. Here goes Emma. 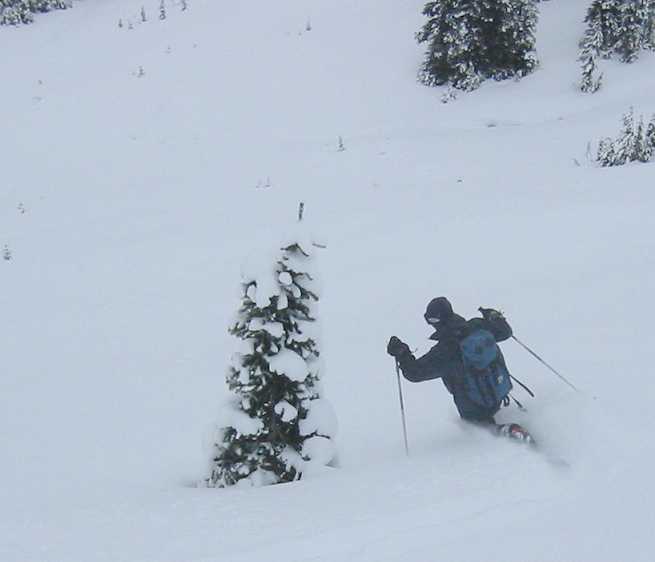 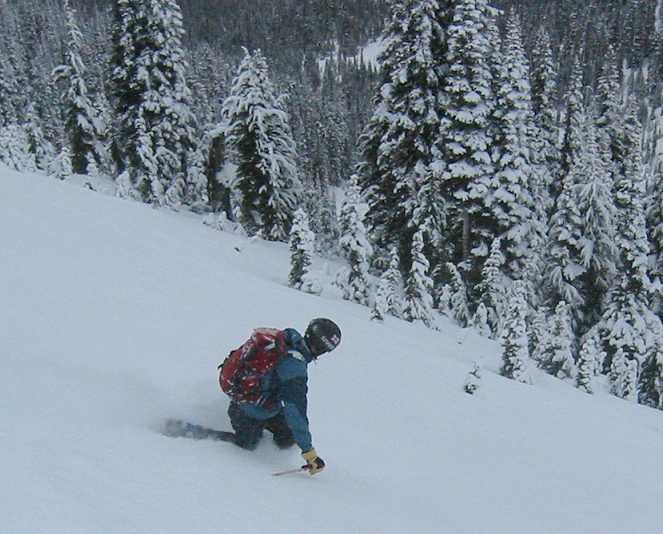 I’m doing a little experiment testing skins to see how much glide mohair skins work. Today I used mohair skins on Kneissl Tankers with Freerides (heavy setup) and I’ll probably do some of these routes again with regular nylon skins. Total ascent of 820m. I kept the heart rate at about 155 – 165; average climbing rate of about 330m per hour – breaking trail in about 10cms of snow.

This entry was posted in 2005, ski and tagged flute, Whistler Backcountry. Bookmark the permalink.