This is a trip we normally do in the Fall when the bugs are dead. But due to the forecast of SUN, the general crappiness of weather thus far this summer and past experience in the fall that prevented this trip from happening, we decided to see what the area was like in July! See our past trips in 2003, 2001, 2000 and 1999 with fall colors. 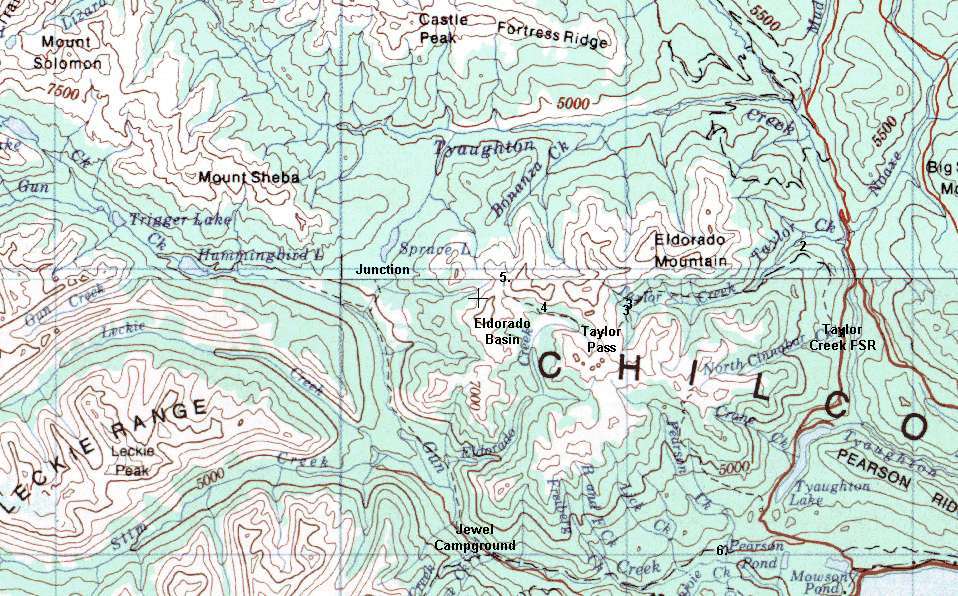 Waypoints for the map above are:

We stayed at Gun Creek Ranch. A property with 4 small cabins, and one common shower/washroom. The cabins were VERY rustic and cosy with a cast iron fireplace for heating! Electricity, stove, fridge etc. Highly recommend staying there if you don’t want to camp or pay a ridiculous amount at Tyax Lodge!

Lots of room for my guys to show off their tans 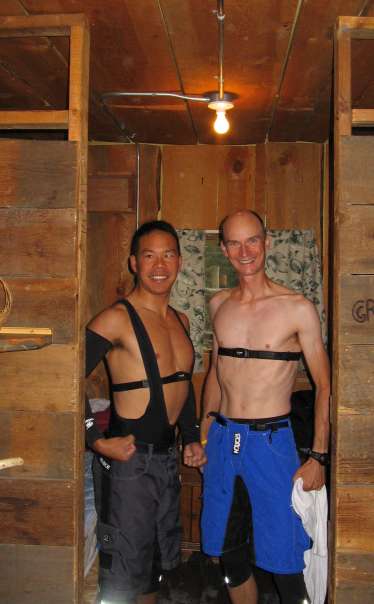 After a couple of wrong turns we finally started on the trail to Taylor Pass ( as indicated by the arrow with the name Taylor Pass on it…). You take the road north of Tyaughton Lake, then at the junction of the Taylor Creek FSR – Mud Creek FSR you swing hard left up the Taylor Creek FSR. Its easy to miss this junction; but you can see it right after you cross North Cinnabar Creek; which is the only downhill part of this drive up to our turnoff. The landing where you can park is pretty wide and the waterbars on the road are easy to navigate even with our Volvo XC.

After going up the road for a bit (maybe a km or so) you have to turn left at the first obvious junction. Then continue up the junction heading roughly north till you hit another logging landing and another obvious turn to the left. Here we are at that junction. This trail leading up Taylor Creek’s drainage to Taylor Pass is an old mining road. Despite the forecast of SUN, we started our ride with pretty heavy overcast. Pete knows how much climbing there is already. This picture looks south down to the Tyaughton Creek drainage to Carpenter Lake.

Proof that we were indeed on the right track! 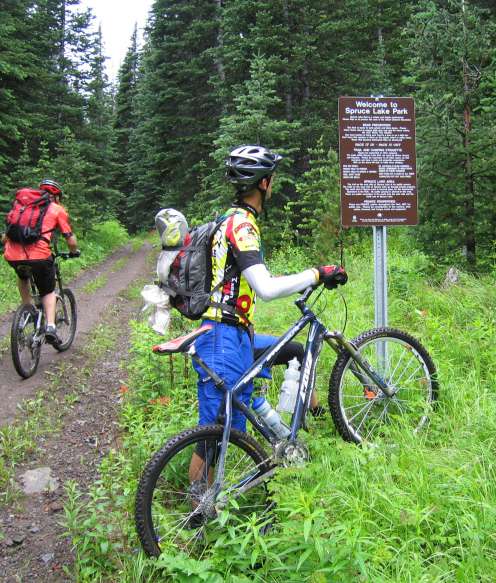 It was a rather wet track with the clouds looming ahead. Hmm how I love heading to the high country that is shrouded in clouds. Its won’t be THAT much colder up there will it? 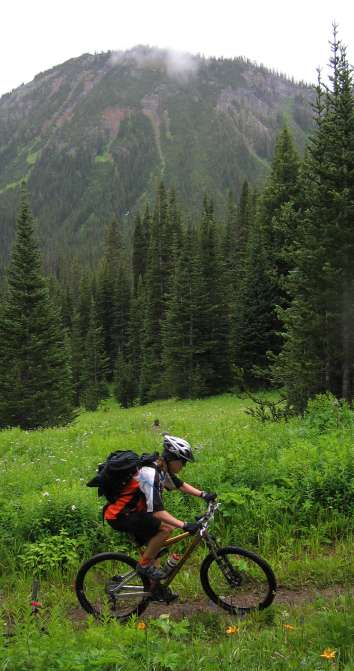 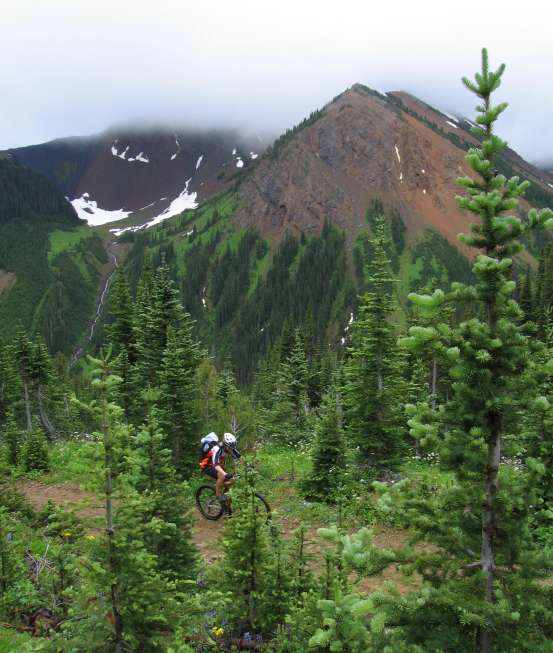 We were in no rush so we stop a few times to smell the wild flowers! Un-named peaks are in the background stained red from high iron content.

The wild flowers were out in force! One positive effect from all this rain! This picture is of Pete and me with the climb to Taylor Pass in the clouds looking to the west. 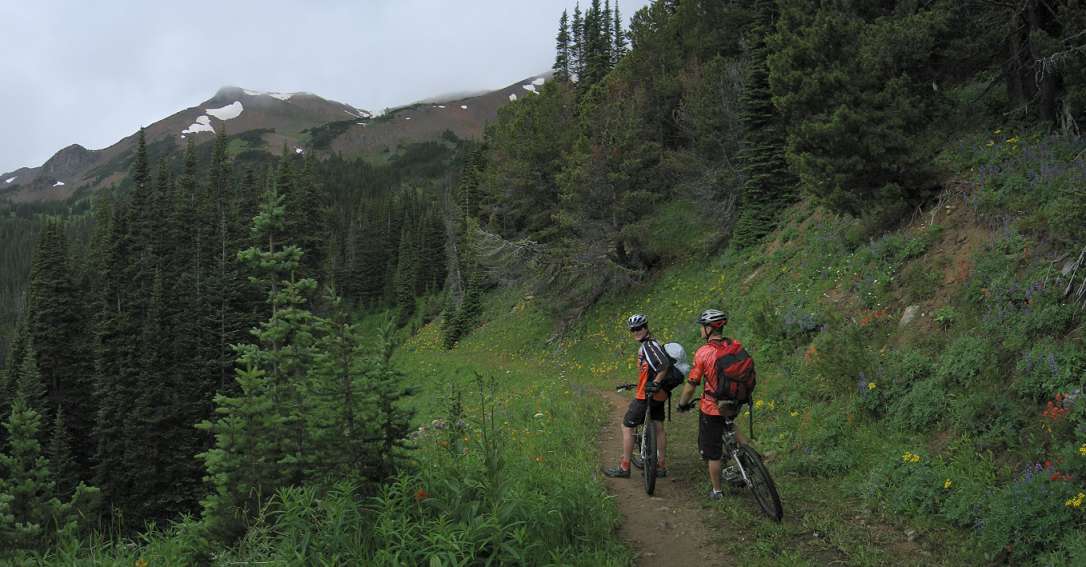 Look at Brian Ride across this Pano! He’s so fast!

More flowers on the climb. 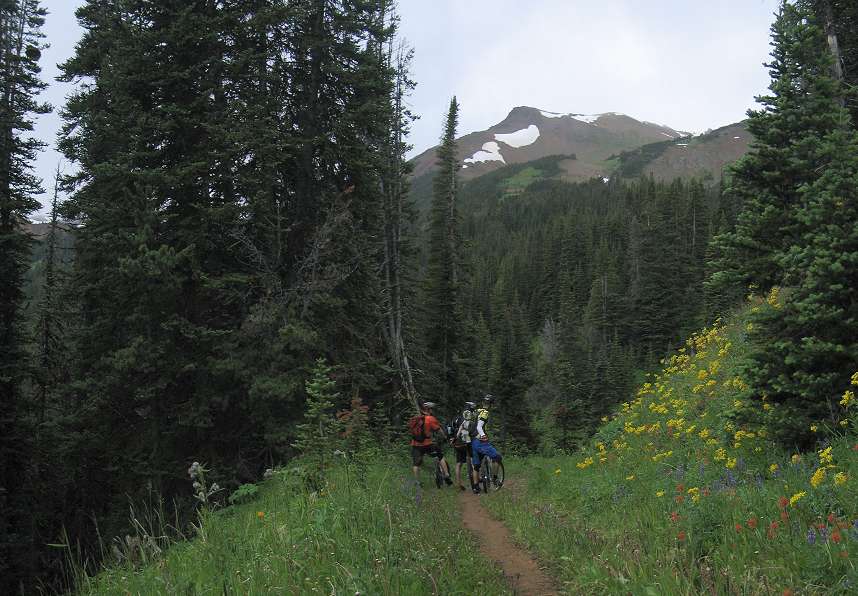 Then we make it to the old Trappers Cabin. The cabin is pretty beat but Lee reassures us that we are almost at the top of Taylor Pass! If the clouds break you would be able to see Eldorado Mountain (2448m) behind us to the north.

There is a bike trail up there apparently.

and the sky actually starts to brighten! 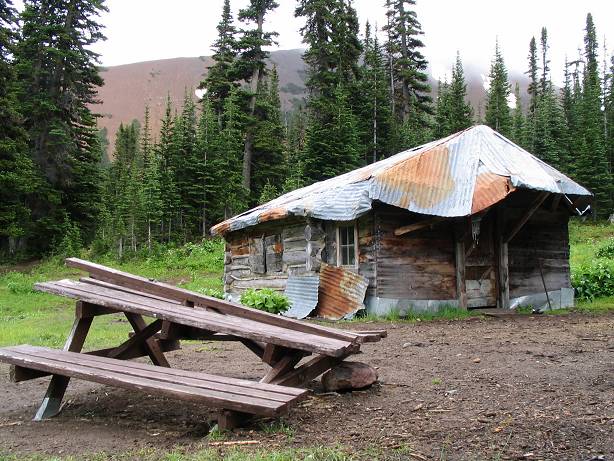 Right after the old cabin, you get to a flat valley where the trail forks. The left fork goes south towards Cinnabar Creek and becomes the Taylor- Pearson trail. You should take the right fork which becomes the Upper Eldorado trail and gets steeper as it climbs. This rather dark picture shows the junction and looks east down to the valley.

We start the climb up to Taylor Pass. Up and up and up I go!

Finally at Pass # 1; Category 1 climb up to Taylor Pass and its quite nice up here! The weather gets better; gee I guess Lee wasn’t too far off when he said the skies would clear.

This picture is taken by Lee who had to bag this little peak just above Taylor Pass. It looks to the left/west down to Eldorado Creek’s drainage and Eldorado Basin and right/east down the Taylor Creek drainage.

We start heading down into Eldorado Basin and are blown away by the array of Lupins, Indian Paint Brush, Daisys and other assortments of wild flowers! 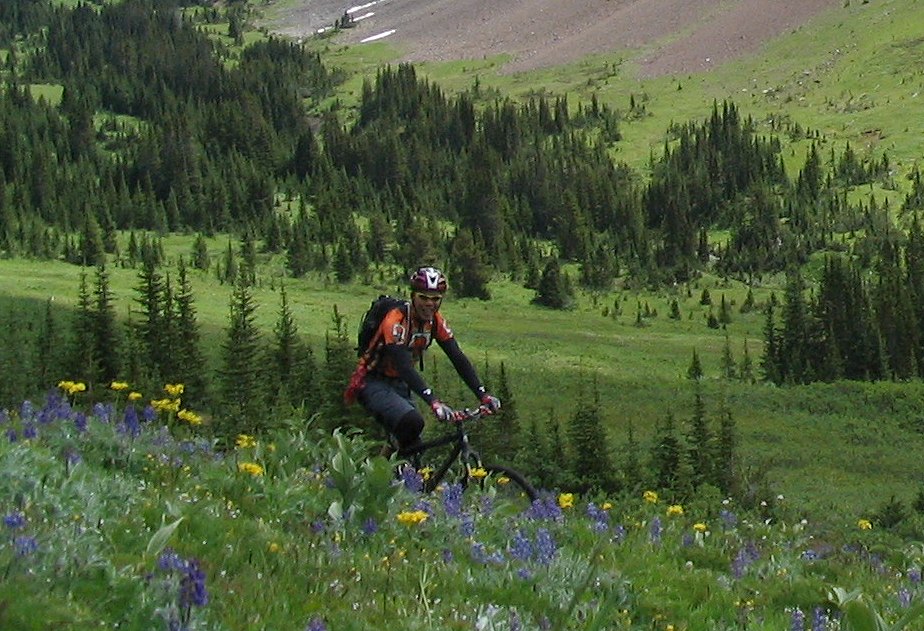 We also can’t help but notice the skiing potential… hmmm perhaps a trip in the winter is in order… There is a cabin in Eldorado Creek run by Spruce Lake Wilderness Adventures. Contact them to book it! 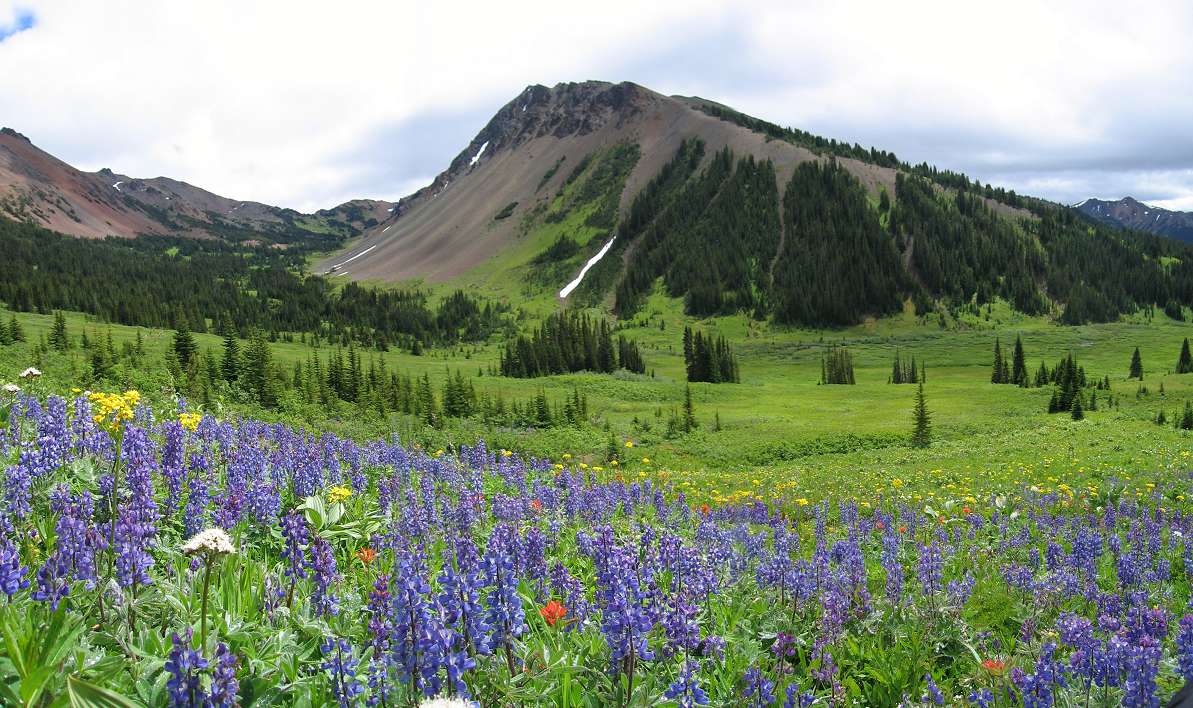 The flowers cover the valley as we climb up to Windy Pass. 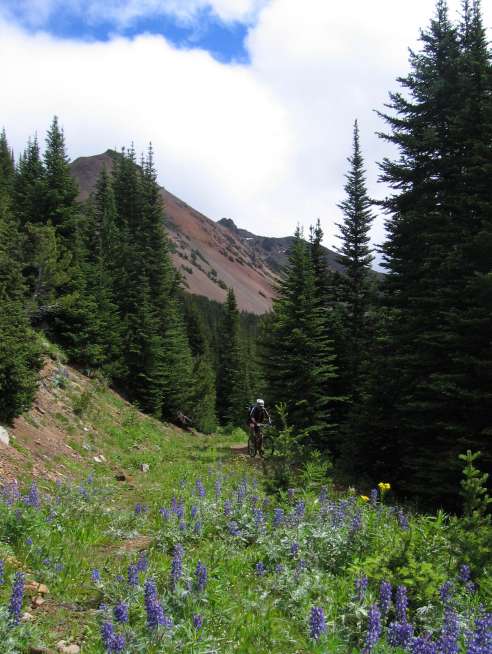 But not before Pete shows his sensitive side! 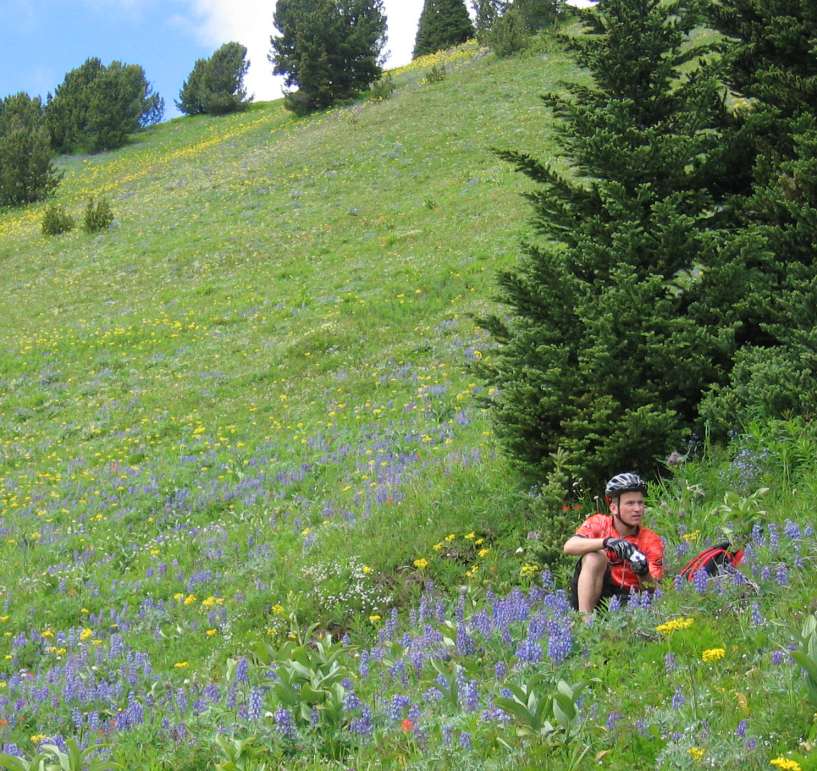 Lee also has to play in the flowers 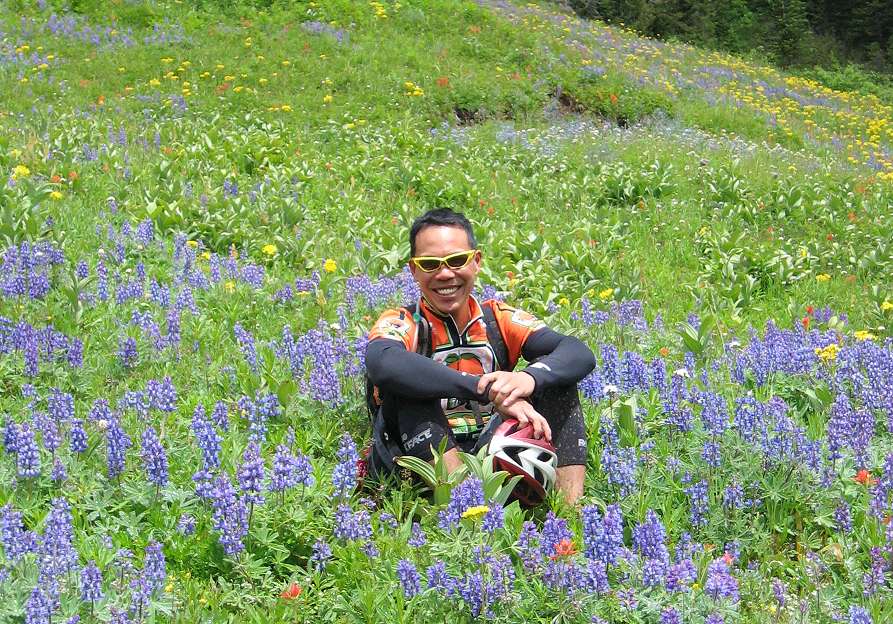 This is a view from Eldorado Basin. From picture left/east is Taylor Pass from where we rode, then an unnamed peak at 7750ft looking due south east, then the valley formed by Eldorado Creek, then the Dickson Range (Dickson Peak and Mt Penrose are in the clouds) far away to the south west and finally to picture right Windy Pass and the High trail. 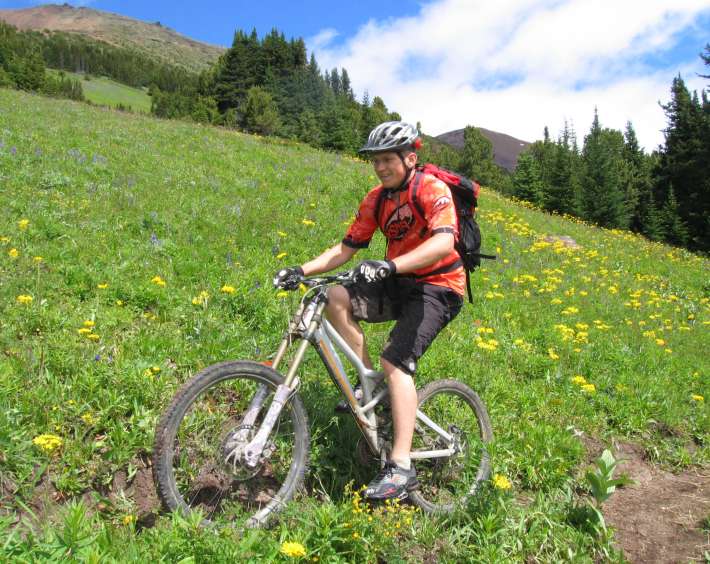 ….up to Windy Pass Ugh who turned off the oxygen? Where the flowers fear to tread and only grasses and low ground flowers can inhabit. Here’s Pete contemplating his lungs looking east to Eldorado Basin and further on to the Shulaps range 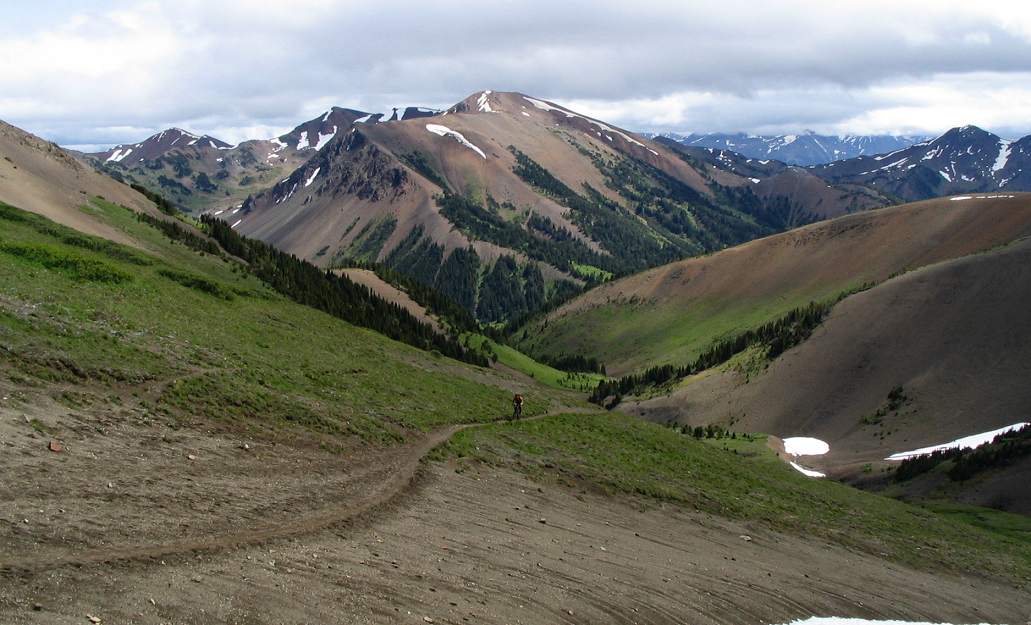 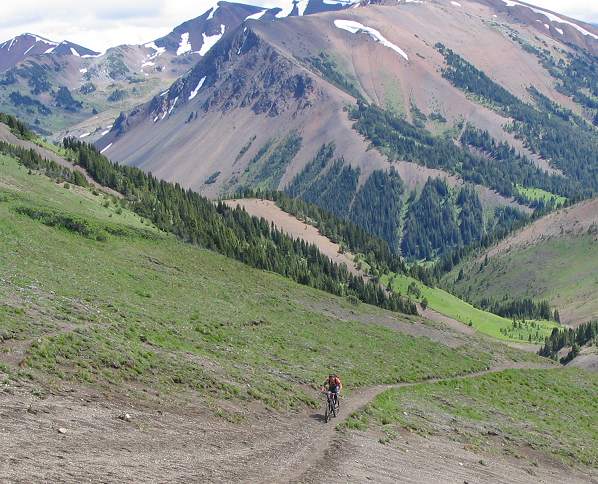 We sit out of the wind staring at the clouds whirl by overhead.

It looks like the surface of the moon up here.

Nice place to dry out your shoes! 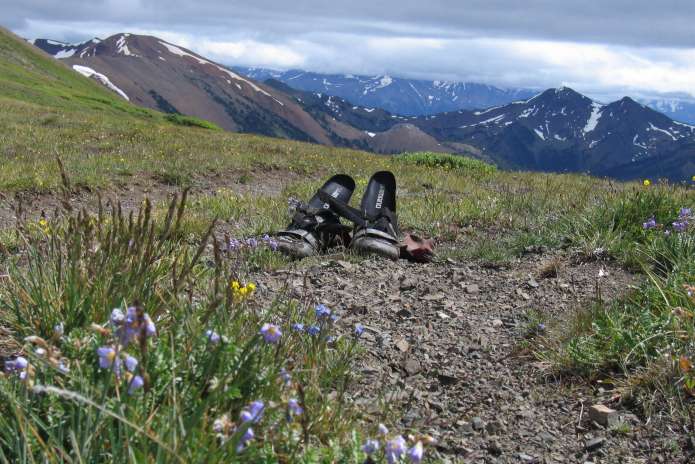 hang in the sand! 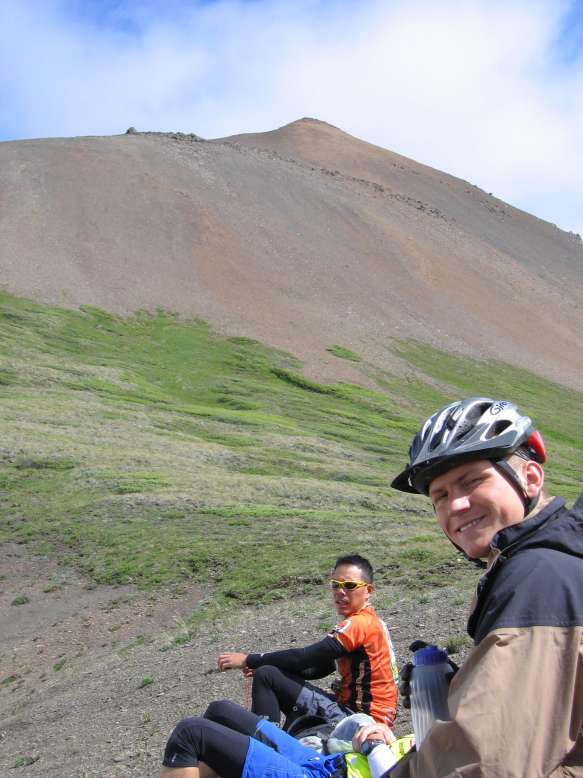 and take in some views! 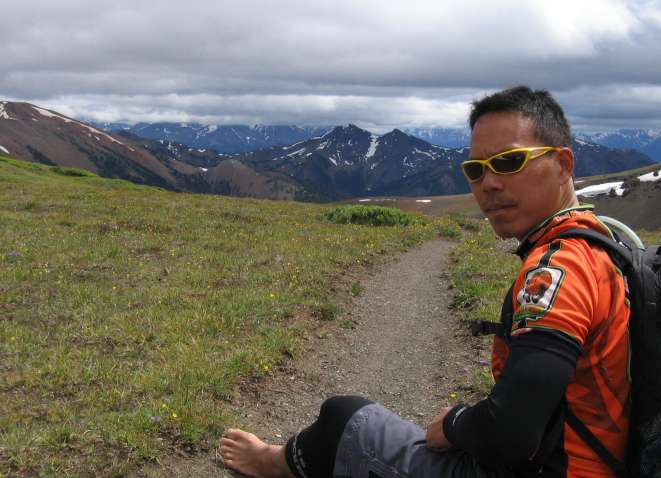 We then start the windy trail down …. 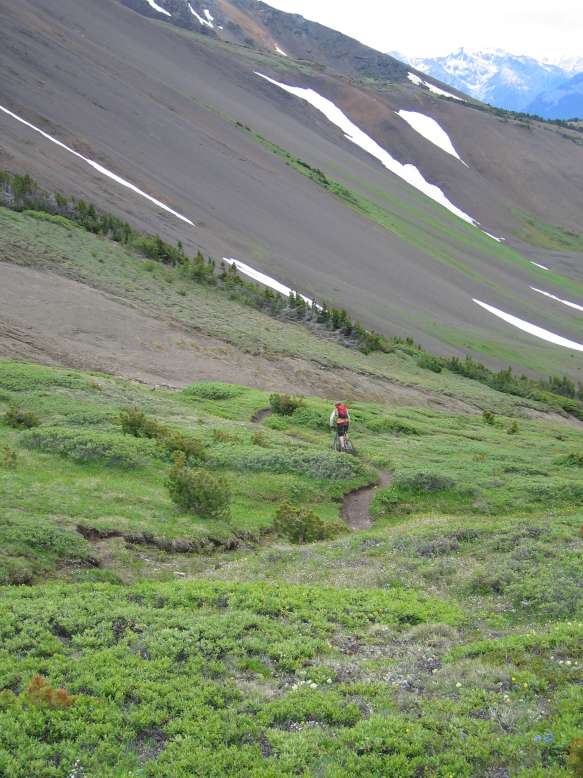 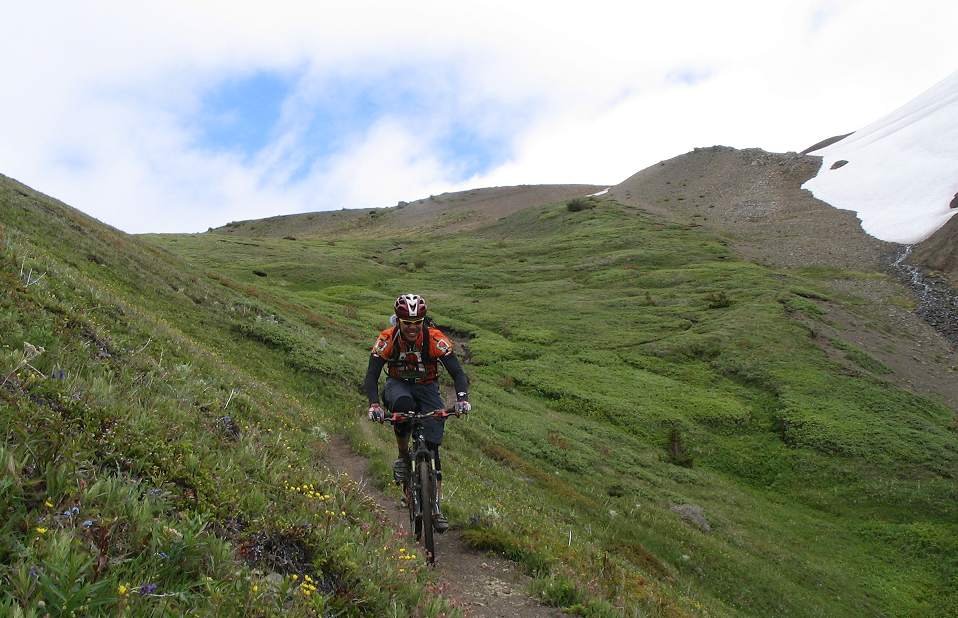 to the valley below and Spruce Lake 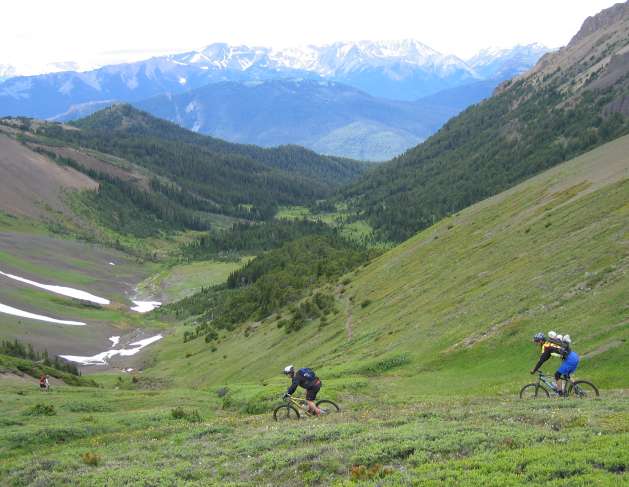 The singletrack is narrow and incredible. The views are stunning! The Pete – Lee man-train is enjoying this ride! 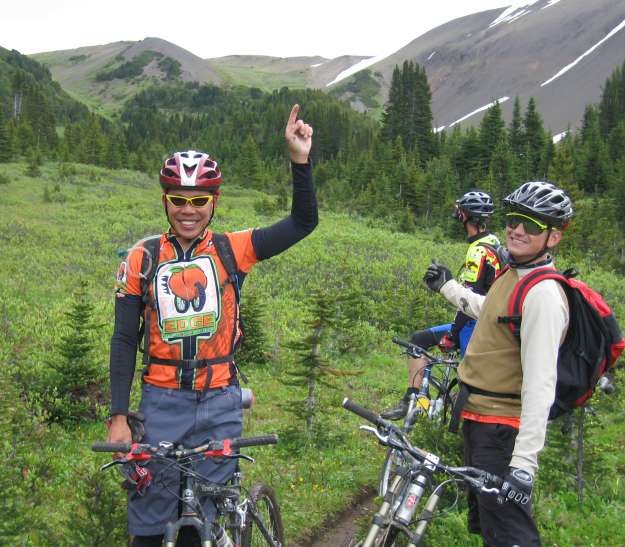 Loamy singletrack all the way to Spruce Lake 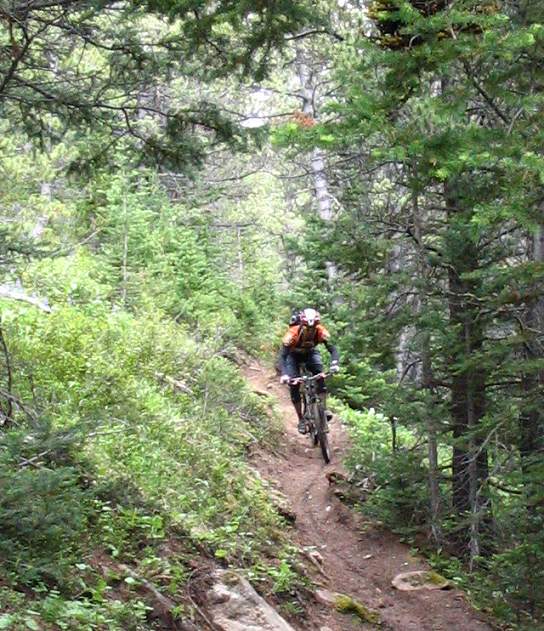 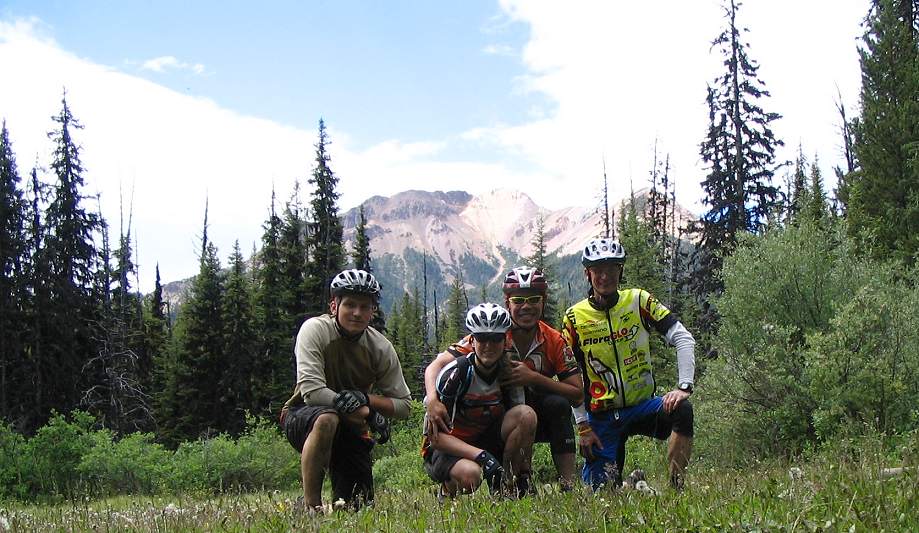 We get to the Spruce junction. After seeing how trashed the trail is to Spruce we decide to head to the grasslands. Good choice! The grasslands are fairly dry and the lupins and flowers are out in full force. This picture looks south-east. The snowy peaks are the Dickson Range and Mt Dickson. 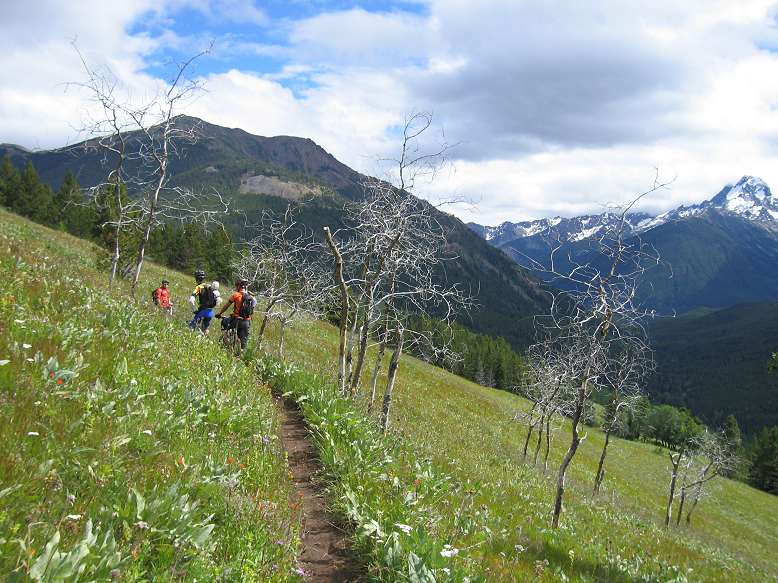 This shows the view to the north west towards the Gun Pass trail; somewhere behind us is Hummingbird, Trigger and Warner Lake up Gun Pass trail which angles off to picture left/north-west. Mount Sheba (2665m) is the prominent peak looking due north-east. The open alpine area to the right of the peak is called Open Heart 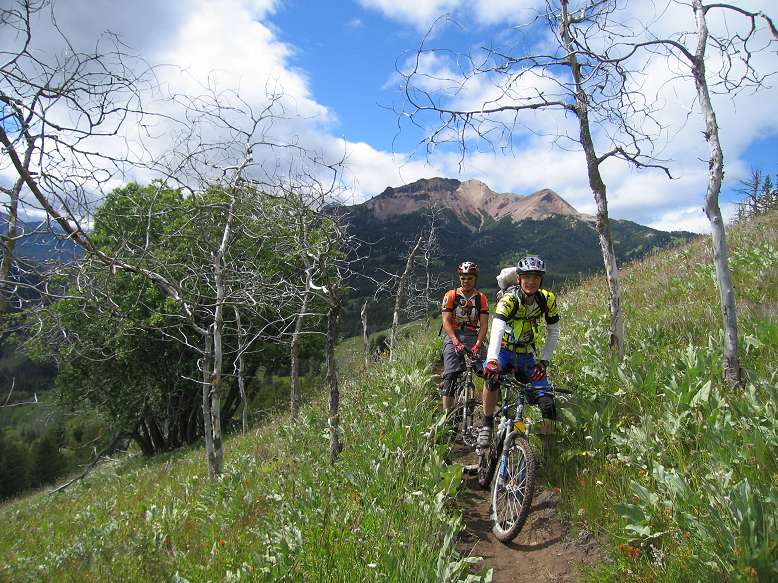 After we do much descending Brian and Pete stop again to take in the views with the wild flowers. This snowy peak is Mt Williams (2785m). 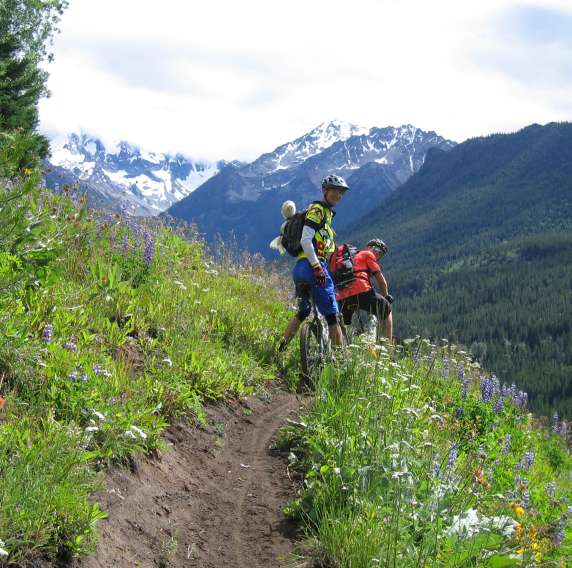 Brian surrounded by masses of lupins. 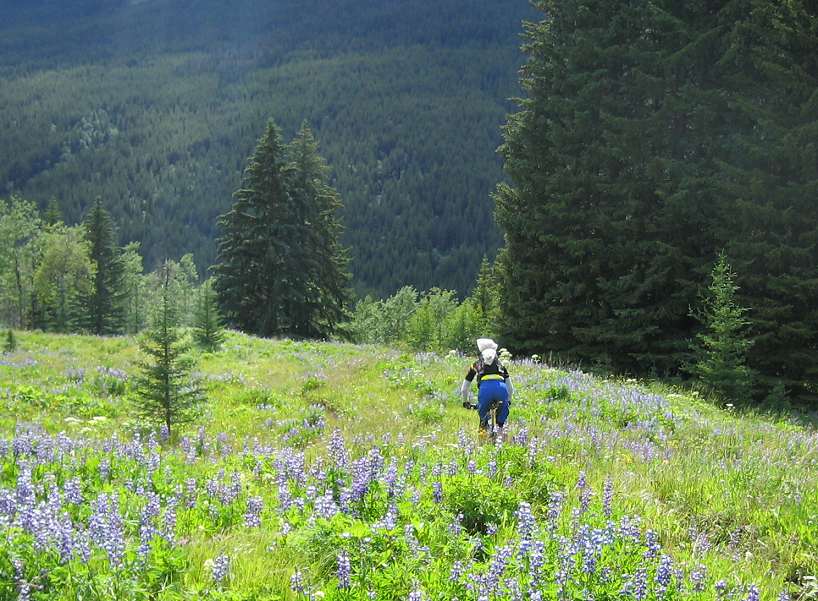 We head back to our Little Green Cabin for some beer and relaxation! 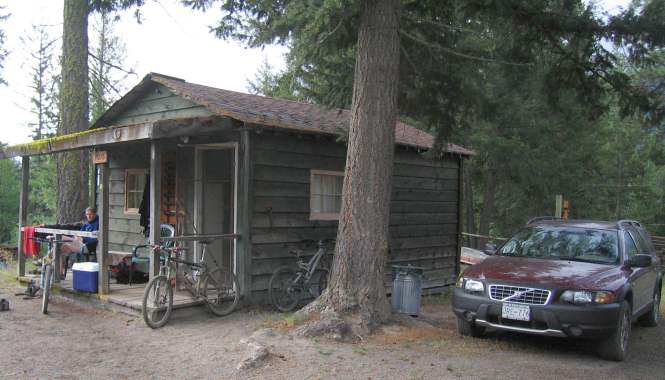 The views in Spring are Stunning! Just as in the fall. The lush green and vibrant wildflowers cast a new perspective on this amazing country. We were blessed with no bugs. The only issue was the wetness and horses made for some mucky trails! We were lucky though to have NO BUGS!

Unfortunately some data was lost but this shows Lee’s effort getting up from starting point halfway to Windy Pass. Total climbing on the day is 1950m and roughly 40 km.

This entry was posted in 2005, bike and tagged Chilcotins, spruce lake. Bookmark the permalink.