Was thinking about touring out to Tremor and bagging another north face to add to my season collection but I get a call from Brian and Toby; “Hey Lee, end of season in Blackcomb. Want to session all the powdery gnar?” Well it dumped a good part of Thursday and we got whacked with a bunch more snow Friday so being a good avvy poodle and deciding that it isn’t so bad to tour for turns off we head to Blackcomb for some slackcountry sessioning.

View from East Col shows that Tremor might have been a tough go. It got warm during the week. Last weekend when Brian and I went and skied whiteout north faces it had still been cold and relatively stable. The warm temps put paid to that – compare the picture of Decker below and the picture from last Monday. All the key north faces cleaned out by good sized avalanches … whoa.

View to Spearhead Col. Toby just beats me to the backcountry gates to be the first one out of the blocks. Hmmm … have to change my mentality a little for slackcountry touring and up the heart-rate. Does this not look like a randonee race? Maybe the Chilkoot trail during the gold rush? 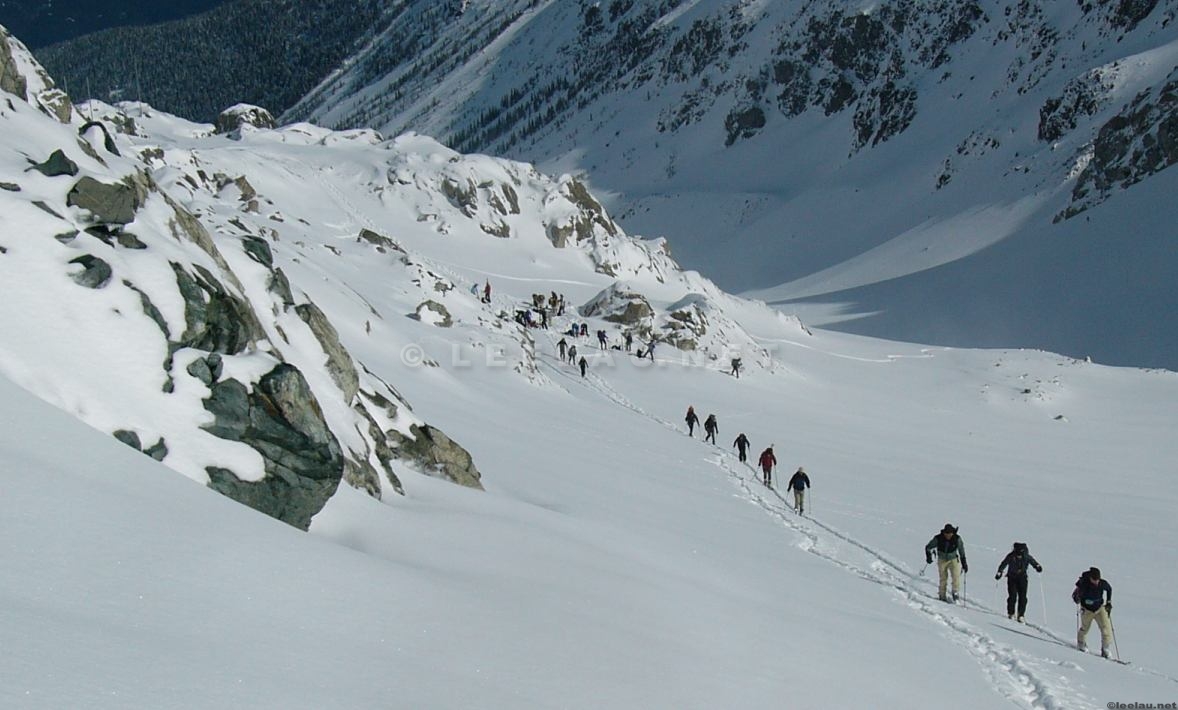 Looks like a mountain goat beats all of us to the freshies. That’s Dean’s Adieu’s face in the picture with the tracks – last Sunday it got cleaned out by a size 2.5. That’s a pretty bold mountain goat. 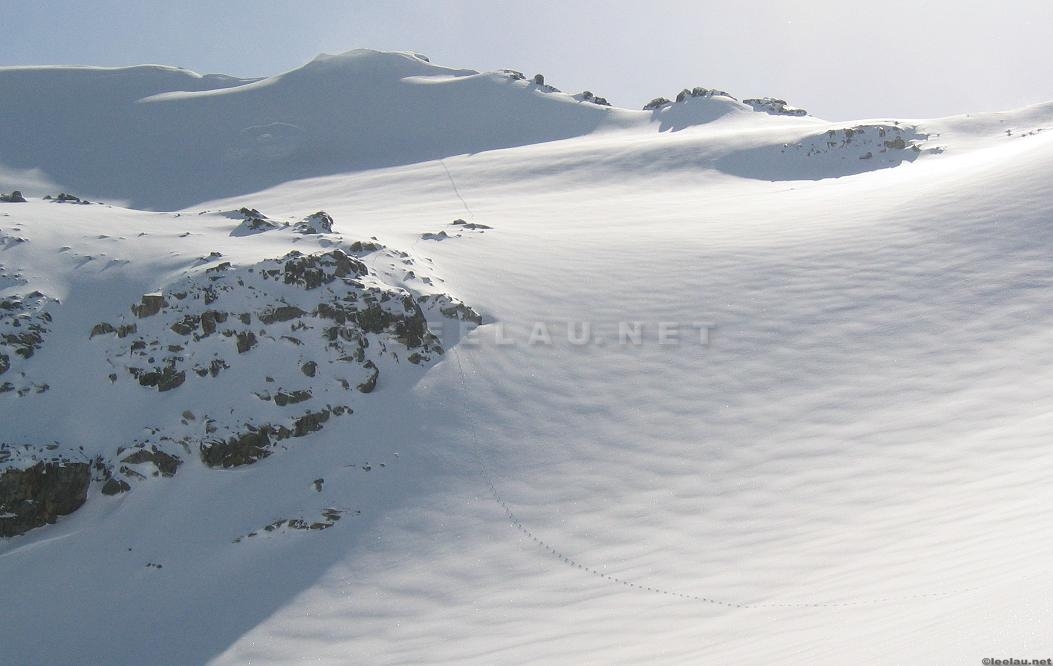 Toby, Brian and Peter head off to DOA to lay down some fresh tracks ahead of some other gapertrons following in their tracks. Ha …. enjoy their dust suckers. Bodybag Bowl is beautifully windloaded with fresh knee deep pow all the way down. Celia lays tracks in the light and fluffies. 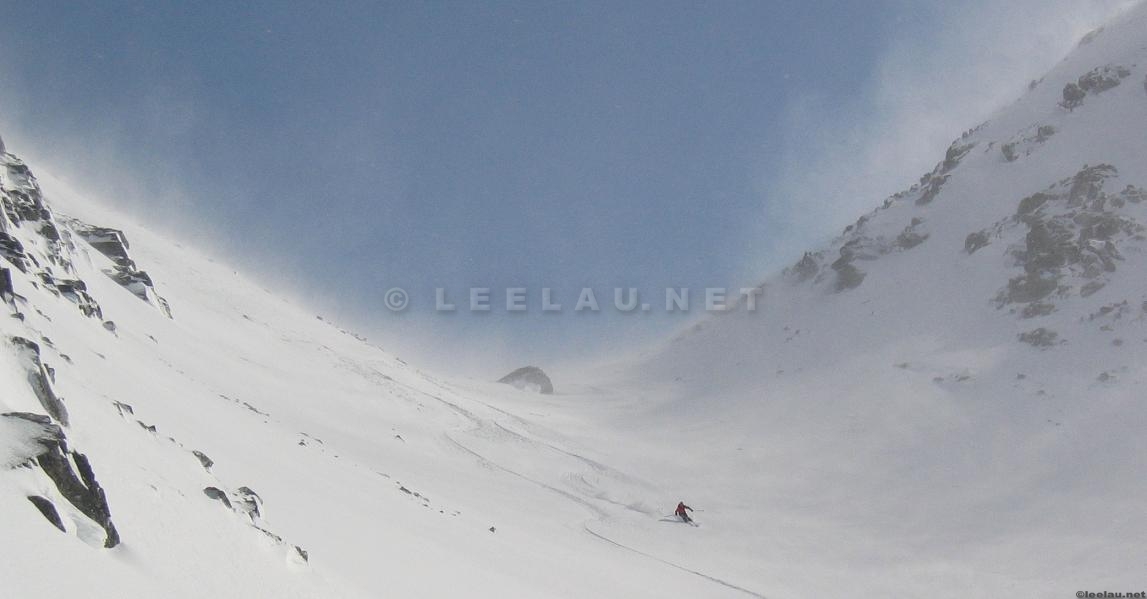 Next lap over to Spearhead Col I wander over to check out a bombhole and its crater. 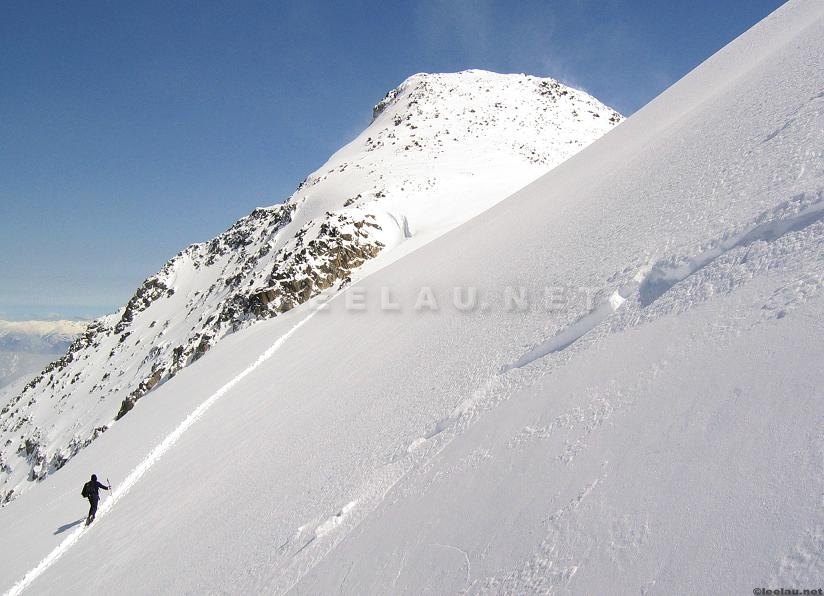 There’s basically 10 cms of new on top of a slight m/f crust then other successive layers of m/f crusts on this westerly aspect. I entertain myself by watching a bunch (gaggle? flock?) of gapertrons bootpack up the face of Dean’s Adieu which slid only last week. 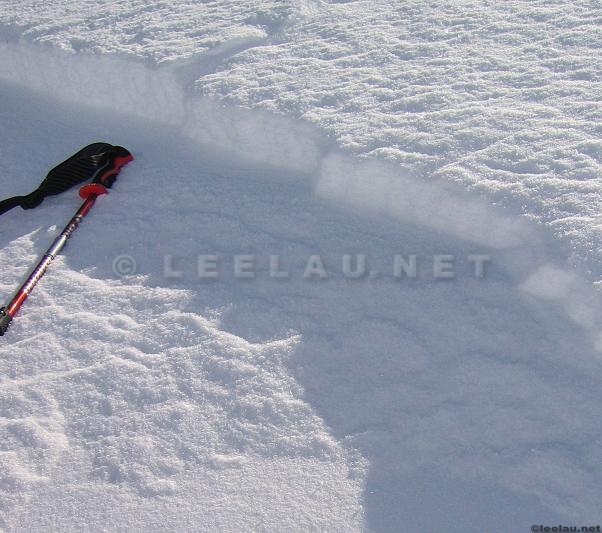 Don’t Swill is a gaper gong-show. There are 17 people there standing around – most gawking. Just for a lark I switch my beacon to receive – 3 signals received 1 of which is Peter. This is Blackcomb sidecountry at its touron finest. The slopes off to skiers right of Don’t Swill are untracked as everyone has lemming-like gone straight down the choke. I manage to lay some freshies down and look back just in time to catch a touron ruin my art. 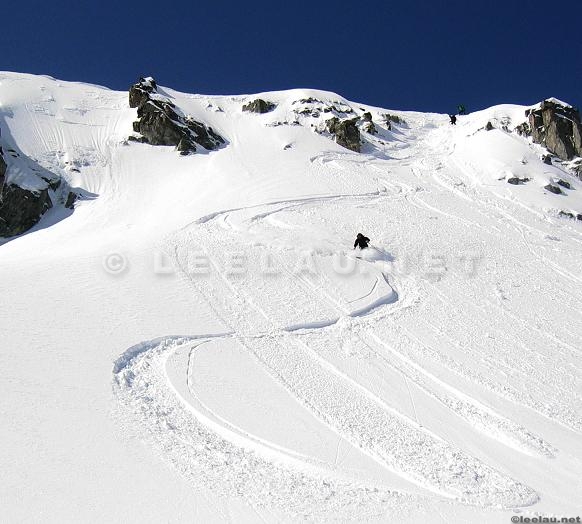 Celia and I head down to the Spearhead Glacier. 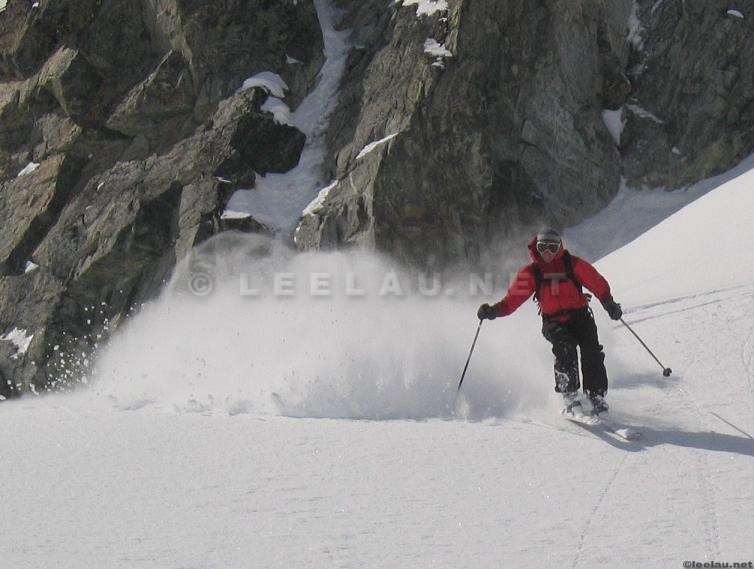 While Celia rushes off to try to catch Brian and Toby (who are busily passing people on the Corona paintrain), Peter and I see no other tracks heading into the ridgeline lookers left on Husume. Here’s Peter on the ridge approaching the summit.

Off we go down Husume. Snow is perfect and the pitch is nice and steep. 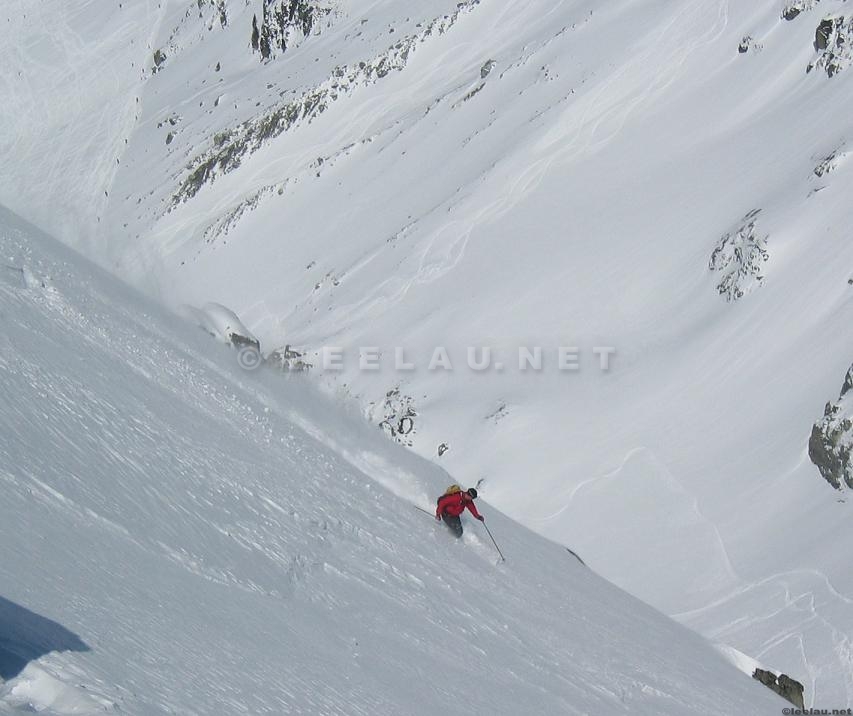 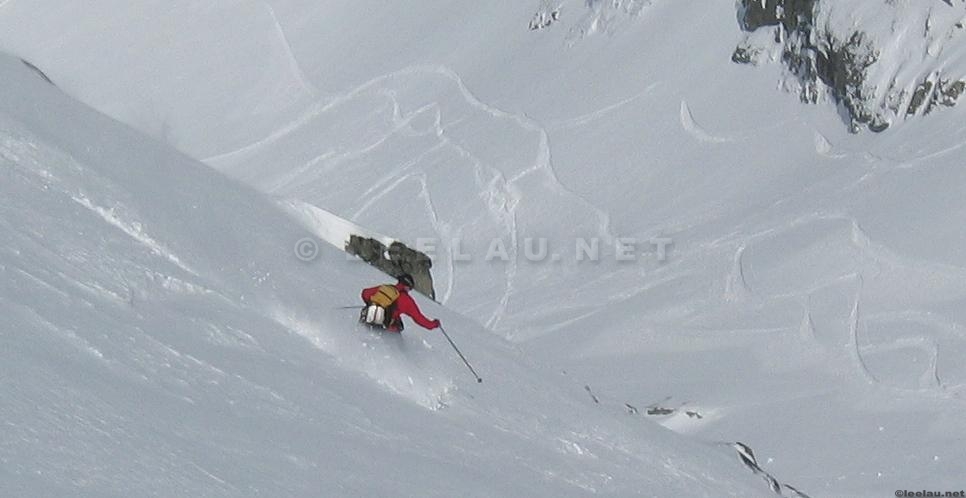 Nice sequence of Peter finding a steep line next to a cliff.

My tracks are lookers left 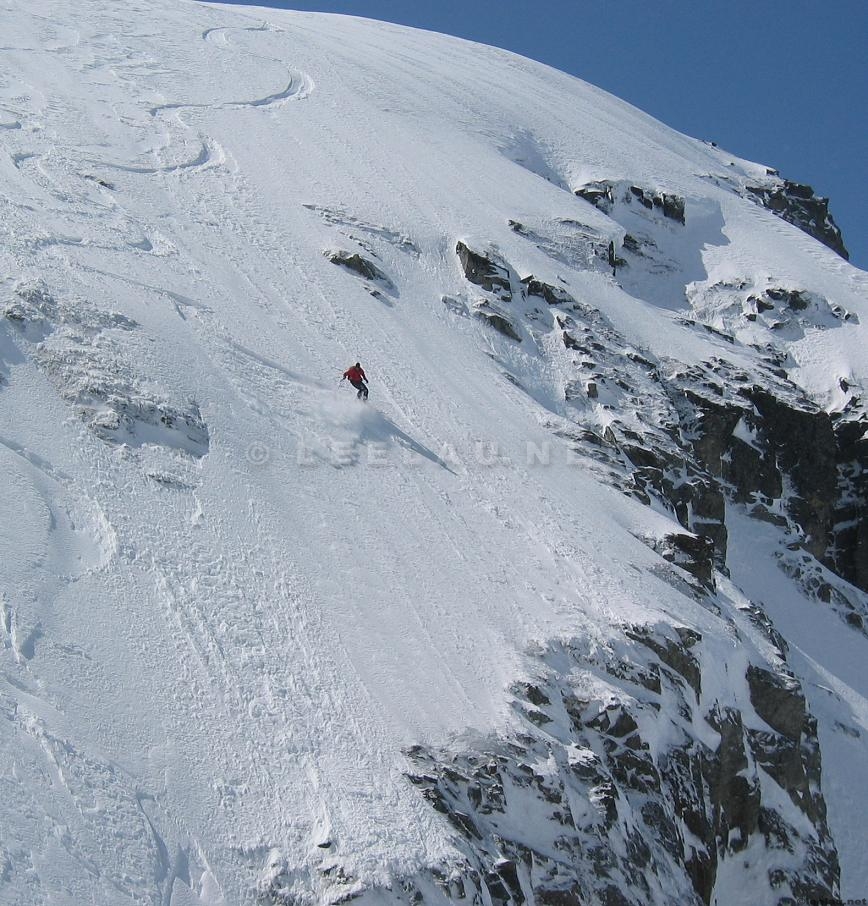 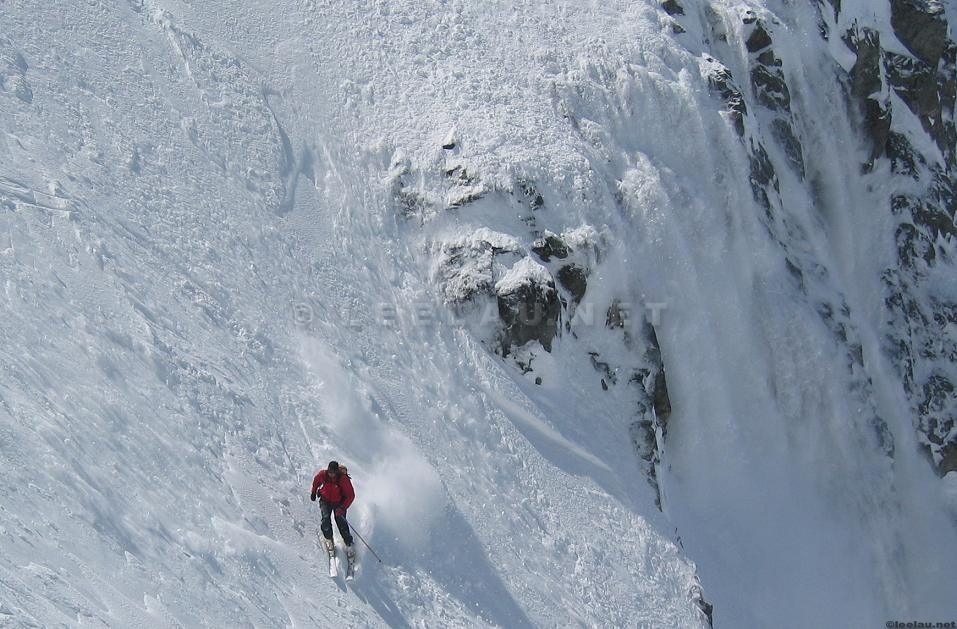 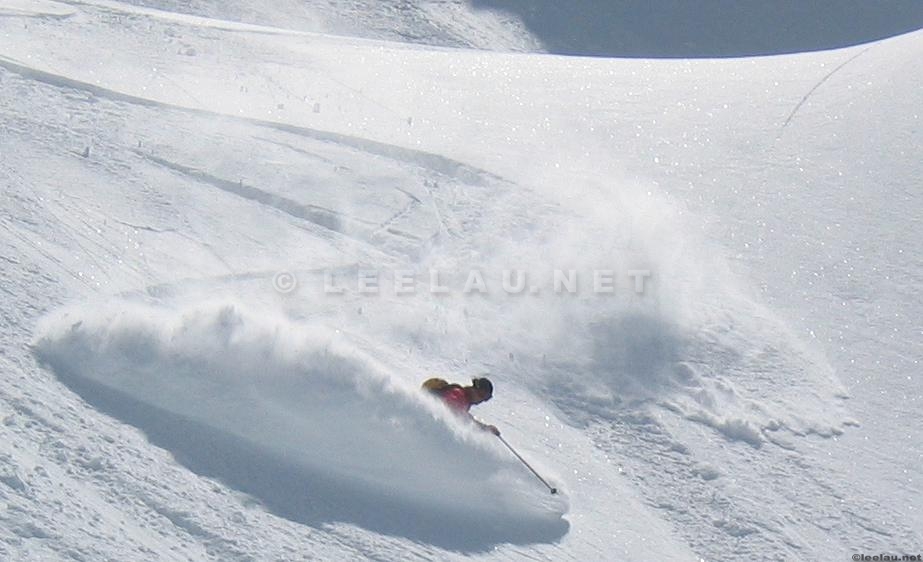 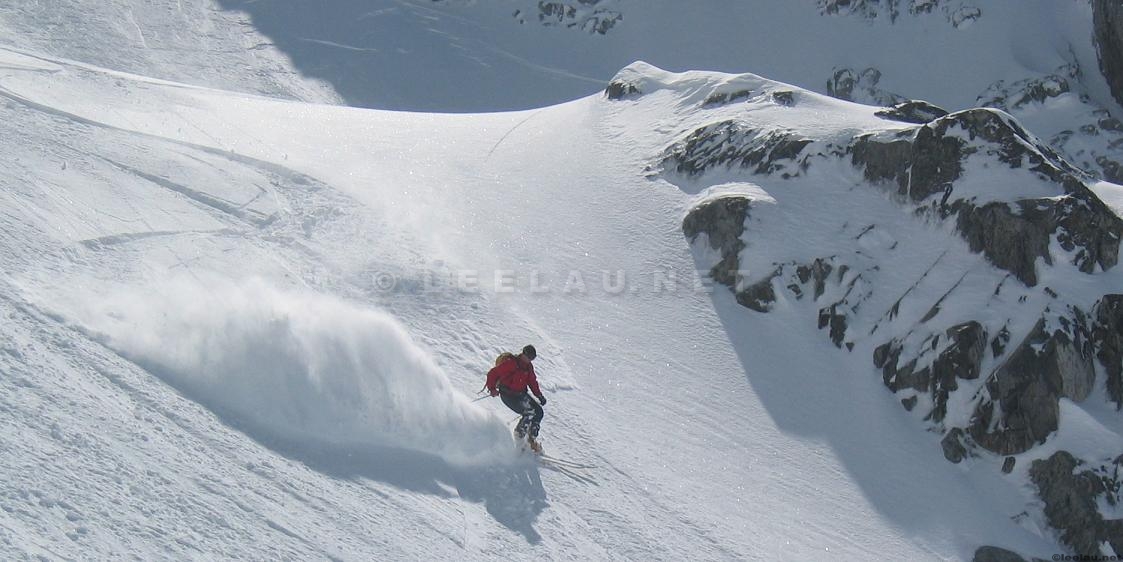 Next run we take is down Corona hoping to find some untracked. I find some untracked that the lemmings have left unscarred on skiers left. I love this shot because it shows our tracks down the ridgeline off Husume peak over my shoulder on the right side of the picture. 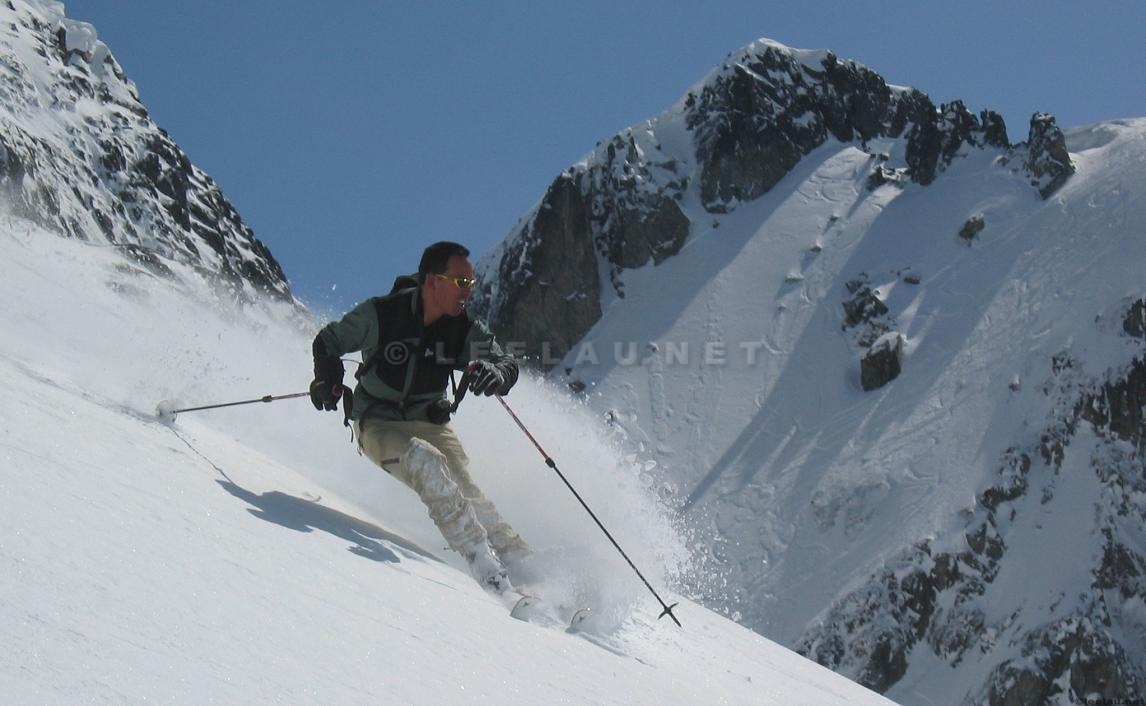 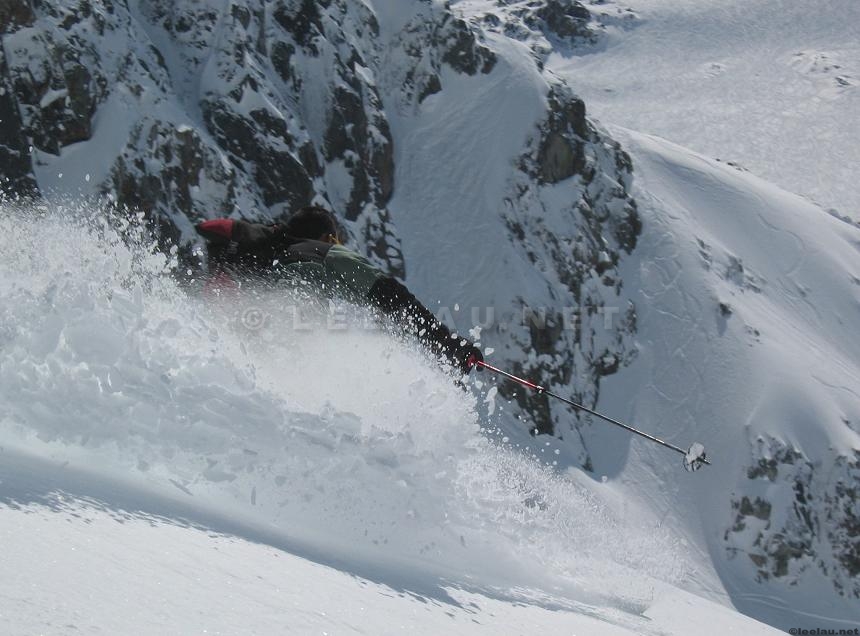 This entry was posted in 2006, ski and tagged blackcomb backcountry, corona, husume. Bookmark the permalink.